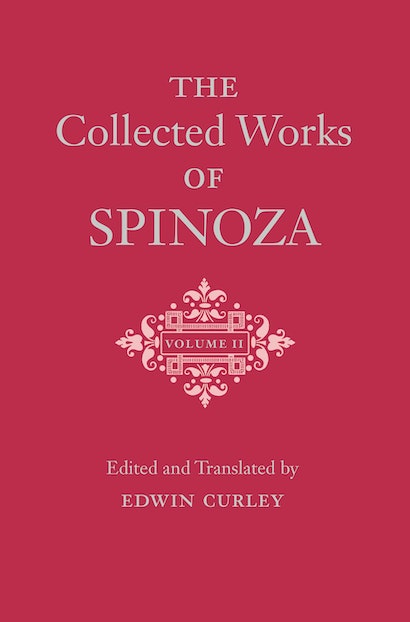 "The Collected Works of Spinoza has been the labour of a lifetime, and it provides us with a fluent, meticulous, consistent and usefully annotated English version of everything Spinoza wrote (except the Hebrew grammar), and a fresh opportunity to see his arguments in detail and to see them whole."—Jonathan Rée, London Review of Books

"A magnificent achievement and a beautiful companion to the first volume. This edition will last—I'm hesitant to say forever—but it's hard for me to see how it will ever be surpassed."—Steven Smith, Yale University

"A monument to scholarship [which] promises to inspire new research in the field. . . . Other good translations of these works now exist, but they do not compare to the depth or importance of the scholarly apparatus that accompanies this one. . . . For this volume, and all that Edwin Curley has brought to Spinoza scholarship, we should be grateful."—Michael A. Rosenthal, Journal of the History of Philosophy

"With this volume, Edwin Curley completes his ambitious project to make Spinoza's difficult thought accessible to an English-speaking audience. Curley's edition sets a very high standard, not only for translation, but for scholarly editions of every kind. His translations are both philosophically astute and readable, while his notes inform the reader of the latest results of textual scholarship. Furthermore, his multilingual glossary-index is an invaluable guide to Spinoza's often idiosyncratic vocabulary. This is an edition of Spinoza for the ages: students and scholars will be reading Curley's Spinoza for many years to come."—Daniel Garber, Princeton University

"This is not just an extraordinarily important and beautifully rendered translation, but a magisterial work of scholarship. The long-awaited second volume, which includes the political writings and later letters, is especially welcome. Curley's edition of Spinoza's writings will, and should, remain the standard text of Spinoza in English for generations to come."—Steven Nadler, author of A Book Forged in Hell: Spinoza's Scandalous Treatise and the Birth of the Secular Age