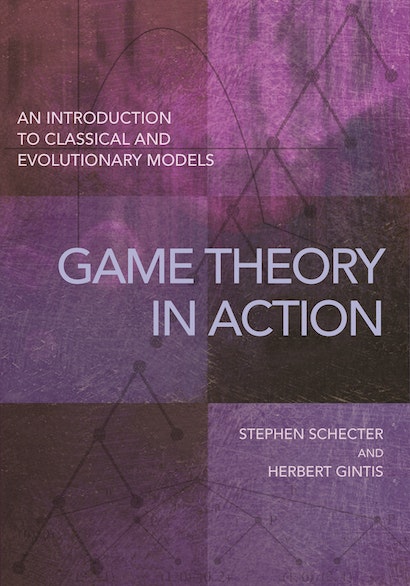 Game Theory in Action is a textbook about using game theory across a range of real-life scenarios. From traffic accidents to the sex lives of lizards, Stephen Schecter and Herbert Gintis show students how game theory can be applied in diverse areas including animal behavior, political science, and economics.

The book’s examples and problems look at such fascinating topics as crime-control strategies, climate-change negotiations, and the power of the Oracle at Delphi. The text includes a substantial treatment of evolutionary game theory, where strategies are not chosen through rational analysis, but emerge by virtue of being successful. This is the side of game theory that is most relevant to biology; it also helps to explain how human societies evolve.

Aimed at students who have studied basic calculus and some differential equations, Game Theory in Action is the perfect way to learn the concepts and practical tools of game theory.

Stephen Schecter is professor of mathematics at North Carolina State University. Herbert Gintis is external professor at the Santa Fe Institute. He is the author of Game Theory Evolving and The Bounds of Reason, and the coauthor (with Samuel Bowles) of A Cooperative Species (all Princeton).

"[A] wonderful introduction to game theory. . . . I found almost all the games and examples fun to read and fun to work through the decisions and matrices. Whether the games were about politics, wine merchants and connoisseurs, or simply how to view sex ratios in society, you will find something of interest in this book."—David S. Mazel, MAA Reviews

"The book is one of the best books written in game theory."—Ahmed Hegazi, Zentralblatt MATH

"Cowritten by a mathematician and an economist, this book provides a fascinating journey into game theory. Substantial parts are devoted to evolutionary game theory, which is a real treat. The approach to the subject is so original, and the tone is so down-to-earth, that I felt like becoming a student and learning everything all over again."—Natalia Komarova, University of California, Irvine

"I like this introductory game theory book. Its clear and challenging material is presented in a manner accessible to a broad spectrum of students. The book's intuitive explanations draw students into understanding the idea of game theory before introducing technical aspects and the problem sets help to develop the confidence and ability necessary to master game theory tools."—Katri K. Sieberg, University of Tampere, Finland