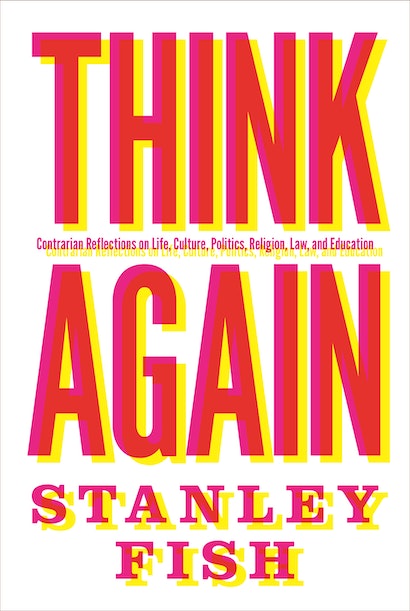 From 1995 to 2013, Stanley Fish’s provocative New York Times columns consistently generated passionate discussion and debate. In Think Again, he has assembled almost one hundred of his best columns into a thematically arranged collection with a substantial new introduction that explains his intention in writing these pieces and offers an analysis of why they provoked so much reaction.

Some readers reported being frustrated when they couldn’t figure out where Fish, one of America’s most influential thinkers, stood on the controversies he addressed in the essays—from atheism and affirmative action to plagiarism and postmodernism. But, as Fish says, that is the point. Opinions are cheap; you can get them anywhere. Instead of offering just another set of them, Fish analyzes and dissects the arguments put forth by different sides—in debates over free speech, identity politics, the gun lobby, and other hot-button topics—in order to explain how their arguments work or don’t work. In short, these are essays that teach you not what to think but how to think more clearly.

Brief and accessible yet challenging, these essays provide all the hard-edged intellectual, cultural, and political analysis one expects from Fish. At the same time, the collection includes a number of revealing and even poignant autobiographical essays in which, as Fish says, “readers will learn about my anxieties, my aspirations, my eccentricities, my foibles, my father, and my obsessions—Frank Sinatra, Ted Williams, basketball, and Jews.” Reflecting the wide-ranging interests of one of today’s leading critics, this is Fish’s broadest and most engaging book to date.

Stanley Fish is the author of numerous books, including How to Write a Sentence, There's No Such Thing as Free Speech, and Is There a Text in This Class? His most recent book is Versions of Academic Freedom. He is the Davidson-Kahn Distinguished University Professor and Professor of Law at Florida International University and the Visiting Floersheimer Professor of Law at Cardozo Law School. He previously taught at Berkeley, Johns Hopkins, Duke, and the University of Illinois, Chicago.

"[Fish] covers so much ground so thoughtfully. Whether he is writing about French theory, religion, poetry, law, liberal education, or politics in upstate New York—where he tries hard to be just an ordinary guy (in his country home)—Fish is both stimulating and precise."—Chronicle of Higher Education

"Think Again is a memorable achievement, offering a standard of argument rarely published in media."—The Australian

"We are rarely in doubt about what Fish intends; there is small danger of his ever saying nothing; and his thoughts continually encourage us to think again as the implications of what he has written expand variously."—Brooke Horvath, Rain Taxi

"Stanley Fish makes you think. No matter what you thought, or thought you thought, on a given subject—Israel, academia, pickup basketball, American law—Fish will flip it and spin it and dip it and turn it around for you. (And he can be a terrific comedian to boot.) A brilliant book."—Mark Edmundson, author of Why Read?

"This collection of Stanley Fish's New York Times essays amounts to an intellectual autobiography of one of America's most interesting writers. As Fish says, his purpose isn't, as in most op-eds, to tell the reader what to think; rather, it's to illuminate Fish's view of how to think—and to shake readers out of their complacent assumptions about free speech, religion, academia, and other subjects."—Linda Greenhouse, author of The U.S. Supreme Court: A Very Short Introduction