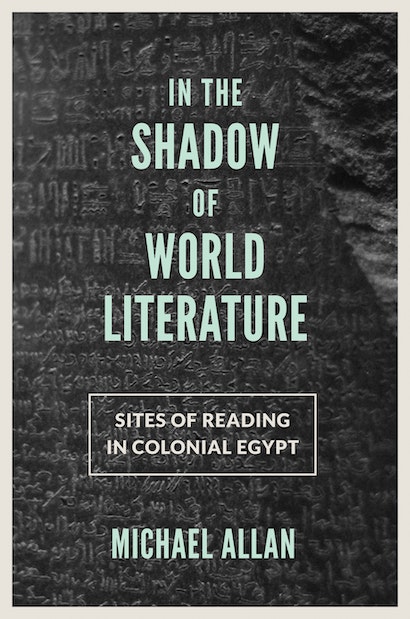 We have grown accustomed to understanding world literature as a collection of national or linguistic traditions bound together in the universality of storytelling. Michael Allan challenges this way of thinking and argues instead that the disciplinary framework of world literature, far from serving as the neutral meeting ground of national literary traditions, levels differences between scripture, poetry, and prose, and fashions textual forms into a particular pedagogical, aesthetic, and ethical practice.

In the Shadow of World Literature examines the shift from Qur’anic schooling to secular education in colonial Egypt and shows how an emergent literary discipline transforms the act of reading itself. The various chapters draw from debates in literary theory and anthropology to consider sites of reception that complicate the secular/religious divide—from the discovery of the Rosetta stone and translations of the Qur’an to debates about Charles Darwin in the modern Arabic novel. Through subtle analysis of competing interpretative frames, Allan reveals the ethical capacities and sensibilities literary reading requires, the conceptions of textuality and critique it institutionalizes, and the forms of subjectivity it authorizes.

A brilliant and original exploration of what it means to be literate in the modern world, this book is a unique meditation on the reading practices that define the contours of world literature.

Michael Allan is assistant professor of comparative literature at the University of Oregon.

"Allan’s incisive In the Shadow of World Literature: Sites of Reading in Colonial Egypt mobilizes reading as a framework for interrogating the now ubiquitous field of world literature. . . . In the Shadow of World Literature’s critical self-positioning of its own sites of reading (US academia, comparative literature, the Egyptian colonial archive), alongside consistent signposting for the book’s broader argument, are a refreshing departure from the stylistic tendencies of most first monographs."—Hoda El Shakry, Journal of Arabic Literature

"With impressive learning and critical insight, Allan argues that the arrival of modern Arabic writing into the space of world literature is a sign not so much of its progress as of the emergence of a new discipline that shapes particular reading practices as proper and dismisses others as ignorant. This is a truly remarkable work about the transformation of sensibilities that underlie the modern concept of progressive politics."—Talal Asad, author of Formations of the Secular

"Allan compellingly rethinks the category of world literature for its role in promoting distinctions between literate and illiterate, rational and irrational, and cosmopolitan and fanatic in colonial Egypt. These distinctions, he argues insightfully, are important to the ways that literary sensibilities affect the reception of religious and scriptural traditions. In the Shadow of World Literature illuminates how literature's mediation of the world experienced by readers prompts different responses that shape new forms of secular criticism in postcolonial societies."—Gauri Viswanathan, Columbia University

"In the Shadow of World Literature is beautifully written, well argued, and accessible to an audience ranging from the educated public to literary experts. Allan carefully weaves his argument, simultaneously practicing and critiquing world literature in the best comparative sense possible."—Tarek El-Ariss, author of Trials of Arab Modernity: Literary Affects and the New Political

"In the Shadow of World Literature contributes to a growing body of work in comparative literature that takes up Arabic language and literature, and offers a significant new approach to how Arabic traditions of learning, recitation, and instruction mediate the constitution of the literary object. I know of no other book that examines ways of reading in quite this way."—Emily Apter, author of Against World Literature: On the Politics of Untranslatability