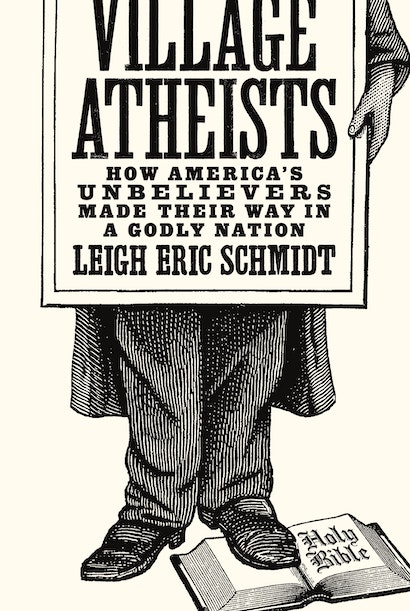 A much-maligned minority throughout American history, atheists have been cast as a threat to the nation’s moral fabric, barred from holding public office, and branded as irreligious misfits in a nation chosen by God. Yet, village atheists—as these godless freethinkers came to be known by the close of the nineteenth century—were also hailed for their gutsy dissent from stultifying pieties and for posing a necessary secularist challenge to majoritarian entanglements of church and state. Village Atheists explores the complex cultural terrain that unbelievers have long had to navigate in their fight to secure equal rights and liberties in American public life.

Leigh Eric Schmidt rebuilds the history of American secularism from the ground up, giving flesh and blood to these outspoken infidels, including itinerant lecturer Samuel Porter Putnam; rough-edged cartoonist Watson Heston; convicted blasphemer Charles B. Reynolds; and atheist sex reformer Elmina D. Slenker. He describes their everyday confrontations with devout neighbors and evangelical ministers, their strained efforts at civility alongside their urge to ridicule and offend their Christian compatriots. Schmidt examines the multilayered world of social exclusion, legal jeopardy, yet also civic acceptance in which American atheists and secularists lived. He shows how it was only in the middle decades of the twentieth century that nonbelievers attained a measure of legal vindication, yet even then they often found themselves marginalized on the edges of a God-trusting, Bible-believing nation.

Village Atheists reveals how the secularist vision for the United States proved to be anything but triumphant and age-defining for a country where faith and citizenship were—and still are—routinely interwoven.

Leigh Eric Schmidt is the Edward C. Mallinckrodt Distinguished University Professor at the John C. Danforth Center on Religion and Politics at Washington University in St. Louis. His books include Restless Souls: The Making of American Spirituality and Heaven's Bride: The Unprintable Life of Ida C. Craddock, American Mystic, Scholar, Sexologist, Martyr, and Madwoman. He lives in St. Louis. 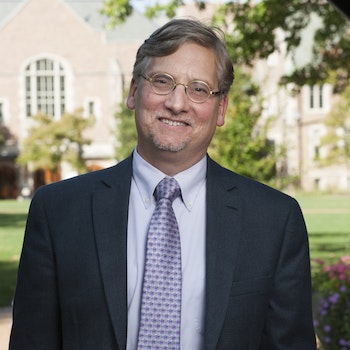 "This well-written and lively text will be of interest to both scholars and more general readers with an interest in American irreligion."—Publishers Weekly

"A felicitous, informative story from a highly knowledgeable author."—Kirkus

"Schmidt offers an entertaining yet educational read for those interested in America's secular history and the struggles many faced to become vocal freethinkers without persecution."—Library Journal

"An engaging examination of unbelief in the 19th and early 20th centuries at the grassroots."—Glenn C. Altschuler, Tulsa World

"His deep reading in letters from small-town citizens to the editors of infidel journals—a major source of the anecdotes in Village Atheists—prove that irreligion existed in all areas of the country, including what would become the Bible Belt."—Allison Miller, Perspectives on History

"For anyone interested in the birth, growth, and development of grassroots secularism in the United States—and the leading lights of American atheism long before Sam Harris or Madalyn Murray O'Hair—this book is an absolute must."—Phil Zuckerman, Los Angeles Review of Books

"Leigh Eric Schmidt's book admirably charts an important period of this history, from the Civil War to the first decades of the twentieth century. During this time the public discourse of unbelief was loudly shaped by a series of colorful personalities whose careers Schmidt deftly limns in four very readable and entertaining chapters: Samuel Putnam, Watson Heston, Charles Reynolds, and Elmina Drake Slenker."—David Morgan, Indiana Magazine of History

"In this pleasurable and well-researched book, Leigh Eric Schmidt offers a keen, sympathetic, and ever-insightful view of irreligion in nineteenth-century America. . . . I feel a customary obligation to write something critical—to point out a flaw, take issue with an assertion, level an insightful reproach. But I'm coming up empty. I simply loved this book. . . . [A] nitty-gritty, on-the-ground history that brings to life the personal and professional realities pioneering secularists navigated. It is vividly told, and more timely than ever. . . . For anyone interested in the birth, growth, and development of grass roots secularism in the United States—and the leading lights of American atheism long before Sam Harris or Madalyn Murray O’Hair—this book is an absolute must."—Phil Zuckerman, Journal of the American Academy of Religion

"The best history of nonbelievers in the United States. . . . Schmidt's prose is lucid and often clever, the biographies he’s written are engaging, and his archival research is especially valuable."—Joseph Blankholm, Public Books

"A powerful meditation on the tension between belief and unbelief in the long project of collective identity formation in the United States."—Geoffrey Pollick, The Revealer

"The book is well organized and well written. It would be good for both popular and scholarly audiences. Schmidt has done exhaustive research, and the endnotes are often as interesting as the text itself. . . . Refreshing."—Malcolm D. Magee, Journal of Southern History

"Thus, the best way to read the book is to read it like a novel. Schmidt has created a catching story, though. His narration is rich in details, and his language is colorful."—Tuija Hovi, American Studies in Scandinavia

"This is a fresh, lively, discerning account of popular freethought. Schmidt shows how resilient and resourceful have been the minority of Americans who publicly refuse belief in God. Amid vehement efforts by the religious majority to suppress them, these hated ‘village atheists' managed to expand gradually the borders of acceptable spiritual orientations. Schmidt's fascinating subjects are popular writers and cartoonists, not the scientists and philosophers that dominate our standard secularization narrative."—David A. Hollinger, University of California, Berkeley

"Tracing a long history of religious freethought that has received little attention, Schmidt tells a gripping story not only of confrontation between Christians and 'infidels' but also one of negotiation, second thoughts, resistance to hypocrisy, principled integrity, and courage in the face of intolerance. Village Atheists is the work of a prize-winning historian at the top of his game."—Grant Wacker, author of America's Pastor: Billy Graham and the Shaping of a Nation

"This is a book that finally argues that atheists belong at the center of the study of American religion, showing how religious infidelity is always and ever the other side of religious fidelity. Both are practiced and articulated with equal contradiction, anguish, and social struggle. Schmidt has redeemed the village atheist as a category of serious significance."—Kathryn Lofton, author of Oprah: The Gospel of an Icon

"Schmidt has always written with verve and precision, and he draws the four freethinkers profiled here as colorful and cantankerous foot soldiers in the culture wars of past generations. He is a superb writer who can engage readers who might not normally be drawn to books in religious history."—E. Brooks Holifield, author of God's Ambassadors: A History of the Christian Clergy in America