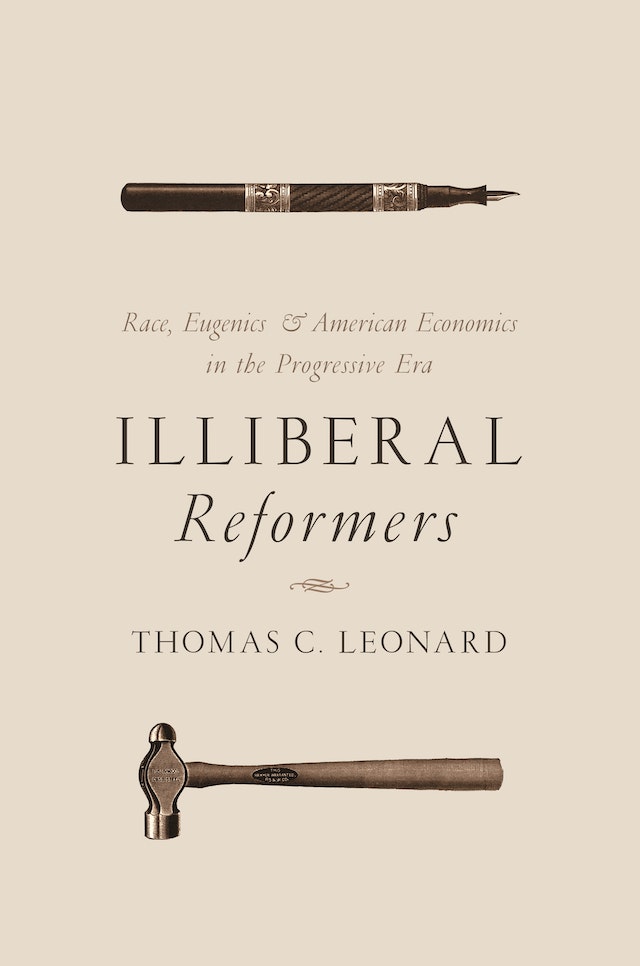 In Illiberal Reformers, Thomas Leonard reexamines the economic progressives whose ideas and reform agenda underwrote the Progressive Era dismantling of laissez-faire and the creation of the regulatory welfare state, which, they believed, would humanize and rationalize industrial capitalism. But not for all. Academic social scientists such as Richard T. Ely, John R. Commons, and Edward A. Ross, together with their reform allies in social work, charity, journalism, and law, played a pivotal role in establishing minimum-wage and maximum-hours laws, workmen’s compensation, antitrust regulation, and other hallmarks of the regulatory welfare state. But even as they offered uplift to some, economic progressives advocated exclusion for others, and did both in the name of progress. Leonard meticulously reconstructs the influence of Darwinism, racial science, and eugenics on scholars and activists of the late nineteenth and early twentieth centuries, revealing a reform community deeply ambivalent about America’s poor. Illiberal Reformers shows that the intellectual champions of the regulatory welfare state proposed using it not to help those they portrayed as hereditary inferiors but to exclude them.

Thomas C. Leonard is research scholar in the Council of the Humanities at Princeton University, where he is also lecturer in the Department of Economics.

"Illiberal Reformers is the perfect title for this slim but vital account of the perils of intellectual arrogance in dealing with explosive social issues."—David Oshinsky, New York Times Book Review

"Particularly timely . . . a superlative narrative about a pivotal era of American history."—American Thinker

"Those puzzled by the ease with which contemporary progressive political movements have turned against liberal values such as free speech will find much material for reflection in Leonard's lucid intellectual history of early twentieth-century progressivism. . . . [Illiberal Reformers] illuminates one phase in the centuries-long American struggle between the quest for liberal values and the impulse to build a godly commonwealth on the back of a strong state."—Walter Russell Mead, Foreign Affairs

"Illiberal Reformers is a great achievement and an important contribution to the revisionist historical literature."—Steven Hayward, National Review

"Illiberal Reformers is a downright frightening tale of how intellectual arrogance and a belief in one's own superiority leads to callous disregard for individual rights and dignity. Budding social engineers, whether the social justice warriors of the left or the theocratic conservatives of the right, should take note of this past and seriously reckon with it as they grope for state power to implement their messianic visions of the common good. But somehow I have a feeling they'll be too thoroughly convinced of their own moral rectitude to take seriously the lessons of the Progressive Era. Cautionary tales have a way of missing those who need them most."—Matthew Harwood, American Conservative

"To reflect on the significance of the Progressive era, Illiberal Reformers is a must read."—Pierre Lemieux, Regulation

"An excellent book and a cautionary tale for our own times."—Robert Whales, Choice

"Thomas Leonard has crafted an elegant, original, and cleverly argued account of core progressive ideas. Illiberal Reformers is deeply researched, and far ranging in the deployment of primary sources. Leonard has not just recycled material from the voluminous secondary literatures on eugenics, economics, immigration, race ‘theory,' labor studies, and Darwinism. Instead he has invariably read key thinkers' publications and quotes from these primary documents, often to devastating effect. The book is a major achievement."—Desmond King, Perspectives on Politics

"One hopes that Leonard's fine volume will put an end to the reflexive habit of many to defend the early liberals, who when it came to people unlike themselves were with rare exception not liberal at all."—Stephen Carter, Bloomberg View

"The work of patient and pathbreaking economists like Leonard has opened up so much critical territory for those studying the history of economic knowledge from other disciplinary vantages. Illiberal Reformers places the consequential alliance between economics and eugenics in the Progressive Era in clear focus and suggests exciting new lines of inquiry for scholars interested in the tangled history of race, state, and market in modern America."—Daniel Platt, Journal of Cultural Economy

"A well-researched and clearly argued work which effectively ties changes in political economy to changes in popular thought, and shows how those changes to thinking effected the very bodies of people living in that society. A very accessible book."—Wesley R. Bishop, Labour-Le Travail

"Illiberal Reformers is a masterly account of the intellectual currents that came to dominate American politics in the first half of the 20th century and, in many respects, dominate it still."—Michael M. Uhlmann, Claremont Review of Books

"Illiberal Reformers tells a story that captures the mind, breaks the heart, and turns the stomach."—Art Carden, Cato Journal

"Required reading for anyone interested in the history of economics and U.S. politics."—Eric Scorsone & David Schweikhardt, Journal of Economic Issues

"Leonard's book offers a broad, forceful treatment and will have to be taken seriously by anyone seeking to understand and evaluate progressivism."—Kevin Schmiesing, Catholic Social Science Review

"Thomas Leonard's Illiberal Reformers is a significant contribution to the historiography of the Progressive Era, by one of the finest scholars working in the field."—Marco Cavalieri, Journal of The History of Economic Thought

"A masterly account of the intellectual currents that came to dominate American politics in the first half of the 20th century and, in many respects, dominate it still."—Michael M. Uhlmann, Claremont Review of Books

"An excellent case study about one of the most important ideas that historians of economic thought can convey to economists (and to social scientists in general): the risks of overconfidence in science."—Marco Cavalieri, Journal of the History of Economic Thought

"Illiberal Reformers: Race, Eugenics & American Economics in the Progressive Era represents scholarship of the highest order. It draws on research that Thomas C. Leonard has been conducting for more than a dozen years (pp. vii–viii). He clearly explains and teases out the nuances and various strands of the Progressive agenda. He provides an excellent account of the emergence of these early economists, the evolution and basis of their thinking, and their subsequent propelling to the centre stage of American policy debates."—Braham Dabscheck, ELRR

"Mythologies that arise around individuals, groups, and ideas of the past tend to mask many warts. Thomas Leonard's excellent book about American economics during the Progressive Era shows how progressives' efforts to champion reform drew on a vision of scientific development that would institutionalize the eugenic creed and, in the process, do great violence to the liberal project that had been at the heart of the American system. Illiberal Reformers provides a powerful lesson in the tensions that surround ideals of social progress, scientific expertise, and the democratic system."—Steven G. Medema, University of Colorado, Denver

"Economists like to think of their ancestors as heroic seekers of truth, each generation, as Newton suggested, standing on the shoulders of the giants who came before. Thomas Leonard demonstrates clearly that the story of economics in late nineteenth- and early twentieth-century America was far more complex—and more interesting. He shows how the economists of that era combined their passion for social reform with religion, eugenics, and evolution theory in ways that seem incredible today. This book is an eye-opener."—Craufurd Goodwin, James B. Duke Professor of Economics Emeritus, Duke University

"This untold story of how Progressive Era activists helped construct the extensive role of government in the economy sheds light on today's technocratic dilemmas. Which decisions need to be left to experts, the ‘social engineers,' and which require democratic participation? Thomas Leonard's book demonstrates that during the Progressive Era this question was resolved only by combining democratic reform with the exclusion of women, African Americans, immigrants, and disabled people as full members of society. It underlines the fact that the tension between ‘expert' economic administration and individual liberties remains at the heart of current political debates."—Diane Coyle, author of GDP: A Brief but Affectionate History

"Illiberal Reformers makes a substantial contribution to the much contested history of U.S. progressivism by providing fascinating new evidence of what Leonard terms its ‘dark side.' This book's rich narrative will amply reward readers interested in the discrete histories of social science, science, politics, culture, industrial relations, and general U.S. history, and offers a wealth of new material on discrimination based on gender, race, and class."—Mary O. Furner, University of California, Santa Barbara