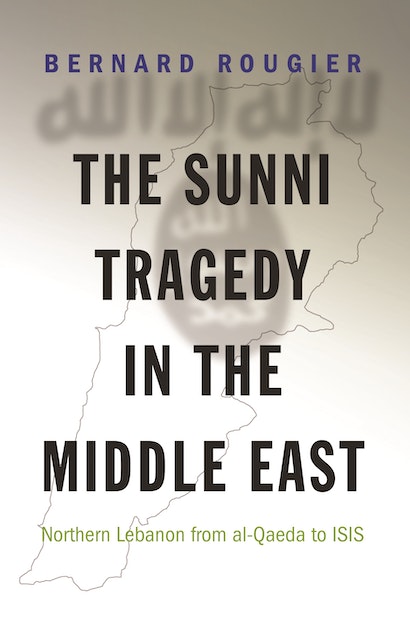 Northern Lebanon is a land in turmoil. Long under the sway of the Assad regime in Syria, it is now a magnet for Sunni Muslim jihadists inspired by anti-Western and anti-Shi‘a worldviews. The Sunni Tragedy in the Middle East describes in harrowing detail the struggle led by an active minority of jihadist militants, some claiming allegiance to ISIS, to seize control of Islam and impose its rule over the region’s Sunni Arab population.

Bernard Rougier introduces us to men with links to the mujahidin in Afghanistan, the Sunni resistance in Iraq, al-Qaeda, and ISIS. He describes how they aspire to replace North Lebanon’s Sunni elites, who have been attacked and discredited by neighboring powers and jihadists alike, and explains how they have successfully positioned themselves as the local Sunni population’s most credible defender against powerful external enemies—such as Iran and the Shi‘a militia group Hezbollah. He sheds new light on the methods and actions of the jihadists, their internal debates, and their evolving political agenda over the past decade.

This riveting book is based on more than a decade of research, more than one hundred in-depth interviews with players at all levels, and Rougier’s extraordinary access to original source material. Written by one of the world’s leading experts on jihadism, The Sunni Tragedy in the Middle East provides timely insight into the social, political, and religious life of this dangerous and strategically critical region of the Middle East.

Bernard Rougier is professor of Arab civilization and society at Sorbonne Paris III University. He is the author of Everyday Jihad: The Rise of Militant Islam among Palestinians in Lebanon.

"Rougier masterfully guides readers deep into the complex terrain of northern Lebanese politics. It is a wondrous, if difficult, voyage."—Foreign Affairs

"More than anything else, this volume amply illustrates the impossibly labyrinthine nature of armed politics in Lebanon. . . . Rougier takes readers from the 1980s through the period of Syria's withdrawal of its forces from Lebanon after the assassination of Prime Minister Rafic Hariri in 2005. . . . Rougier draws a striking picture of the chaos and dangers of the current situation."—Choice

"Fascinating and nuanced. . . . This book is a significant addition to the scholarship on modern Lebanon, political Islam in the Levant and the wider Middle East and Arab world, and Sunni jihadism."—Christopher Anzalone, The American Journal of Islamic Social Sciences

"Rougier's book is based on first-hand acquaintance with the Lebanese Islamic scene, an impressive array of interviews with major actors in both the security services and the Sala arena, and hard-to-come-by documents. This combination on has resulted in an invaluable 'thick description' of the tapestry of local, regional and global forces that in their intricate and ever-shifting interactions and conflicts shaped the trajectory of jihadi-Salafism in North Lebanon. . . . [An] excellent study."—Itzchak Weismann, Journal of Global Analysis

"Rougier's impeccable scholarship and profound knowledge of the Arabic-language sources guided his watershed fieldwork in the Sunni Levant years before the rise of the self-proclaimed Islamic State. There is no better reading than this milestone book to decipher what is presently at stake in the devastating wave of jihadism we are witnessing today."—Gilles Kepel, Sciences Po, Paris

"This is a rare and wonderful book. Rougier makes a truly original contribution to the study of the modern Middle East."—Roger Owen, author of The Rise and Fall of Arab Presidents for Life

"This is an extraordinary book by an accomplished scholar. Rougier has been researching in Lebanon for years, and he has established a level of rapport and trust that is quite amazing. There is no other book like this one."—Augustus Richard Norton, author of Hezbollah: A Short History