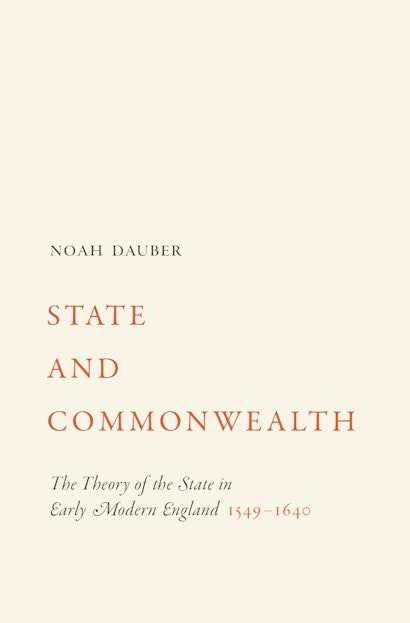 In the history of political thought, the emergence of the modern state in early modern England has usually been treated as the development of an increasingly centralizing and expansive national sovereignty. Recent work in political and social history, however, has shown that the state—at court, in the provinces, and in the parishes—depended on the authority of local magnates and the participation of what has been referred to as “the middling sort.” This poses challenges to scholars seeking to describe how the state was understood by contemporaries of the period in light of the great classical and religious textual traditions of political thought.

State and Commonwealth presents a new theory of state and society by expanding on the usual treatment of “commonwealth” in pre–Civil War English history. Drawing on works of theology, moral philosophy, and political theory—including Martin Bucer’s De Regno Christi, Thomas Smith’s De Republica Anglorum, John Case’s Sphaera Civitatis, Francis Bacon’s essays, and Thomas Hobbes’s early works—Noah Dauber argues that the commonwealth ideal was less traditional than often thought. He shows how it incorporated new ideas about self-interest and new models of social order and stratification, and how the associated ideal of distributive justice pertained as much to the honors and offices of the state as to material wealth.

Broad-ranging in scope, State and Commonwealth provides a more complete picture of the relationship between political and social theory in early modern England.

"This is a book for dedicated scholars of the period who will delight in Dauber's careful erudition."—Choice

"A well-executed study that pays reading even by the nonspecialist."—David Ciepley, Review of Politics

"State and Commonwealth is a challenging and fascinating book, one that repays close and careful reading."—Sarah Mortimer, Journal of Modern History

"State and Commonwealth offers a stimulating and highly original rereading of English political thought from the reign of Edward VI to the onset of the Civil Wars. This quietly brilliant book takes readers to familiar texts by unfamiliar ways, linking social and intellectual history with great effect. Dauber treads an illuminating path entirely his own."—Annabel S. Brett, author of Changes of State: Nature and the Limits of the City in Early Modern Natural Law

"This attractively written book describes and analyzes the political thought of the ‘commonwealth' tradition that flourished in England in the sixteenth and early seventeenth centuries. State and Commonwealth is a significant contribution to the field. I know of no other book on the market like it."—J. P. Sommerville, author of Royalists and Patriots: Politics and Ideology in England, 1603–1640