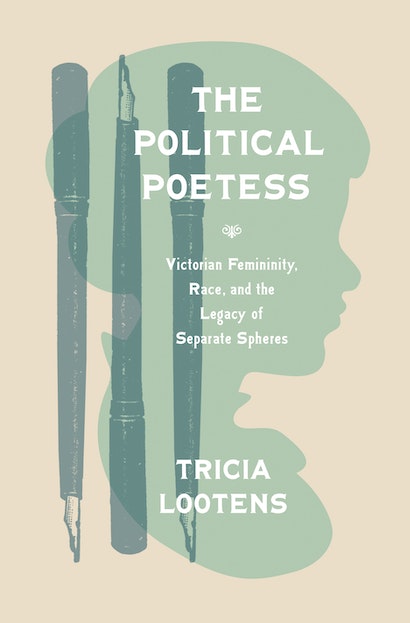 The Political Poetess challenges familiar accounts of the figure of the nineteenth-century Poetess, offering new readings of Poetess performance and criticism. In performing the Poetry of Woman, the mythic Poetess has long staked her claims as a creature of “separate spheres”—one exempt from emerging readings of nineteenth-century women’s political poetics. Turning such assumptions on their heads, Tricia Lootens models a nineteenth-century domestic or private sphere whose imaginary, apolitical heart is also the heart of nation and empire, and, as revisionist histories increasingly attest, is traumatized and haunted by histories of slavery. Setting aside late Victorian attempts to forget the unfulfilled, sentimental promises of early antislavery victories, The Political Poetess restores Poetess performances like Julia Ward Howe’s “Battle Hymn of the Republic” and Emma Lazarus’s “The New Colossus” to view—and with them, the vitality of the Black Poetess within African-American public life.

Tricia Lootens is associate professor of English and Josiah Meigs Distinguished Teaching Professor at the University of Georgia. She is the author of Lost Saints:  Silence, Gender, and Victorian Literary Canonization.

"It will be required reading for advanced scholars of Anglo-American poetry and women's writing."—Choice

"An unforgettable account of female poets as blazingly politically involved. Lootens turns the Poetess on her head in The Political Poetess: Victorian Femininity, Race, and the Legacy of Separate Spheres. No longer a pale, lovely, swooning maiden, Lootens’s Poetess is a person of color, a person deeply imbricated in transatlantic antislavery rhetoric, a woman who speaks for a nation. In bravura rereadings of well-known poems (and some not known at all), Lootens makes us see anew by interrogating 'how national sentimentality thinks.'"—Talia Schaffer, Studies in English Literature

"Lootens marshals a considerable number of cultural sources, literary and not, to build a thorough case for her reexamination of the connections between racial and separate spheres ideology. . . . At its ambitious best, The Political Poetess suspends the boundaries that continue to haunt our current critical lives: between black and white, public and private, British and American, past and present."—Amanda Adams, Victorian Periodicals Review

"In all these ways, the Political Poetess becomes integral to the revisionist history of the female literary tradition emphasising national anxieties. . . . [Lootens] reads with acumen and diligently researches the historical circumstances of poetic production."—Georgia Gotsi, Historical Review

"Leaping and lingering through two centuries of Poetess poetics, Lootens traces the national, racial, and gender politics of a complex generic figure that still haunts our literary culture. Lootens is a brilliant reader of poems, always attuned to ‘the click of the cliché.' She has a wide-ranging command of critical debates in a field that is now transformed by the question she poses: What made the Poetess white? Written with gusto for students and scholars alike, The Political Poetess is a major contribution to Victorian studies, feminist theory, critical race studies, and historical poetics."—Yopie Prins, University of Michigan

"In this book, Lootens argues that from the late eighteenth century through recent times, the Poetess tradition has been predicated on the assumption of whiteness both in its practice and criticism. Lootens honors a tradition of feminist work on nineteenth-century women writers while throwing into question longstanding assumptions and showing a way to a more inclusive, politically engaged form of criticism. Compelling and persuasive, this is a landmark work."—Eliza Richards, University of North Carolina, Chapel Hill

"This is a brilliant and powerful book. Carving out important new territory and offering striking insights at every turn, it creates a vision of transatlantic Anglo-American studies that centers on the range of responses to slavery and provides a new chapter in the study of the Poetess, a figure of great interest across the nineteenth century—and still today. The depth, range, and detail of the research exhibited here are all extraordinary."—Carolyn Williams, Rutgers University