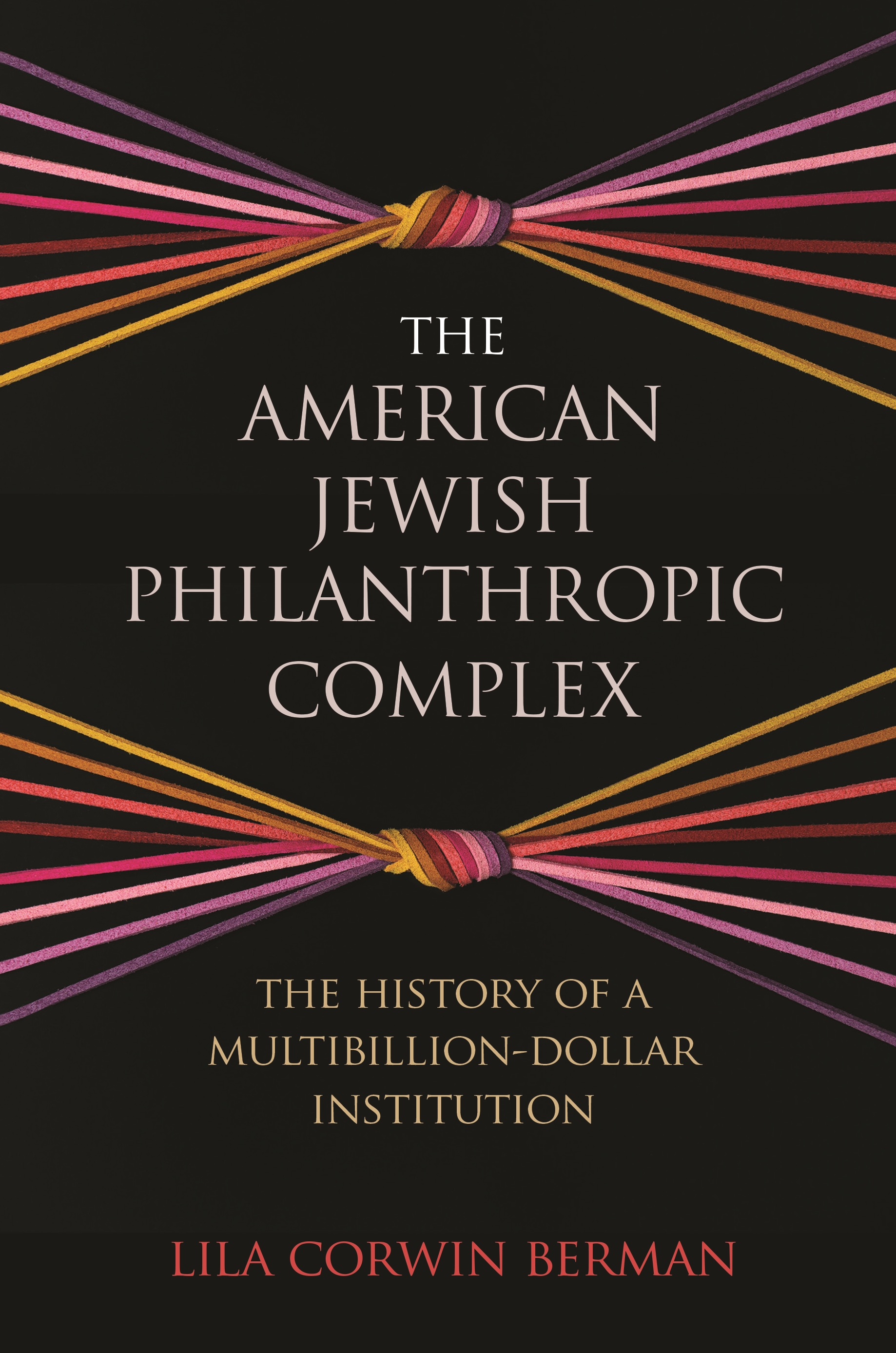 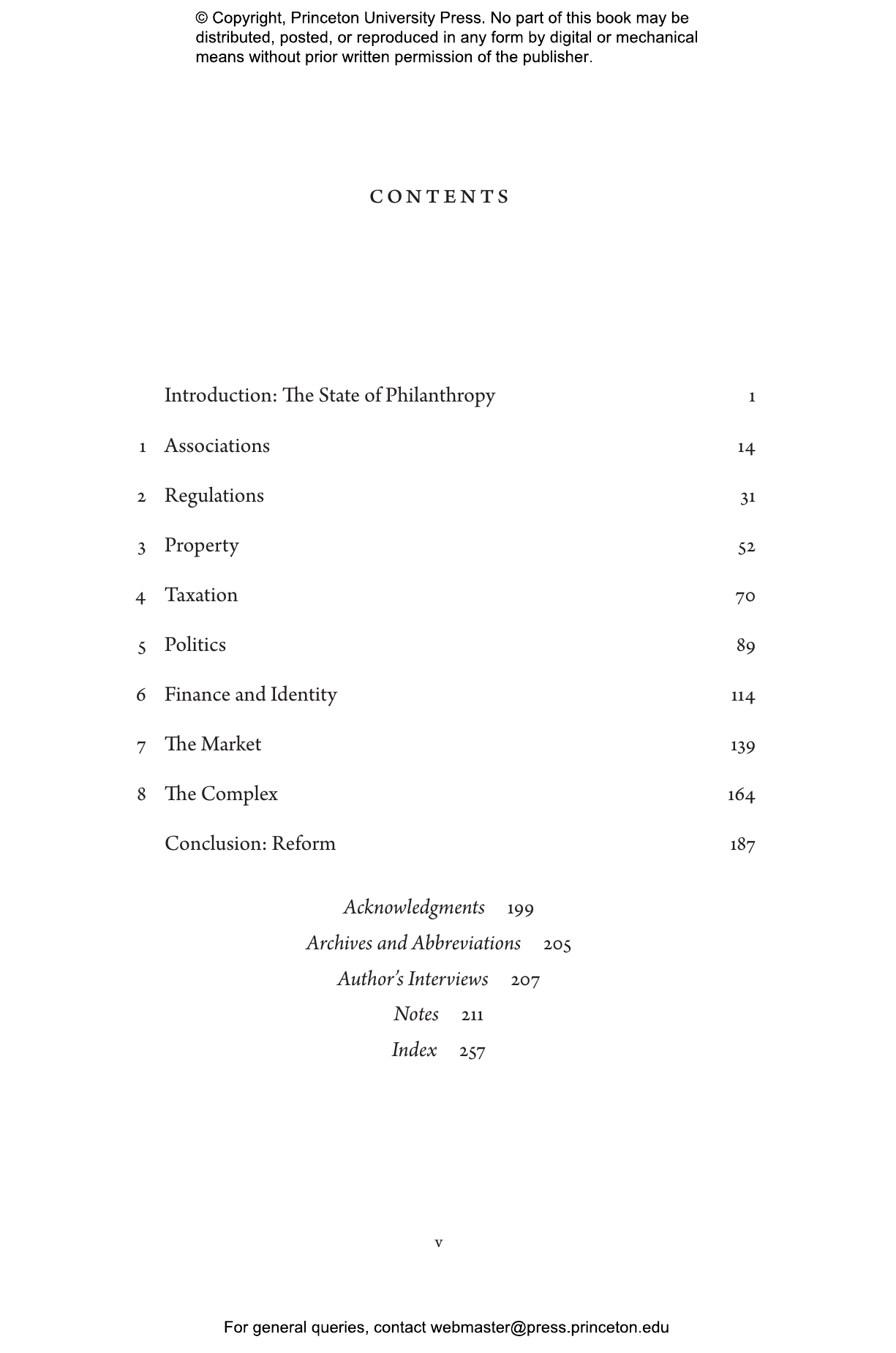 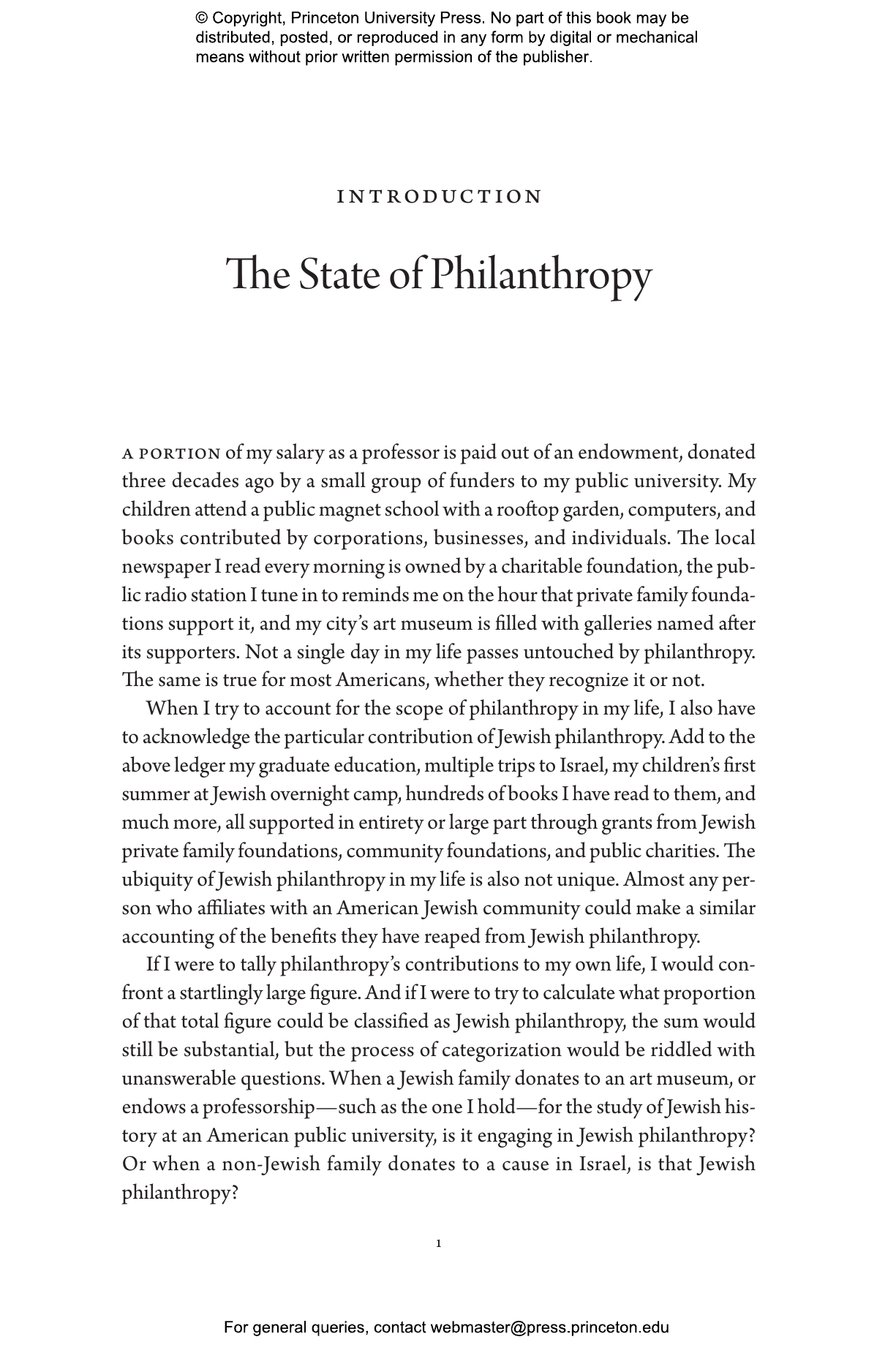 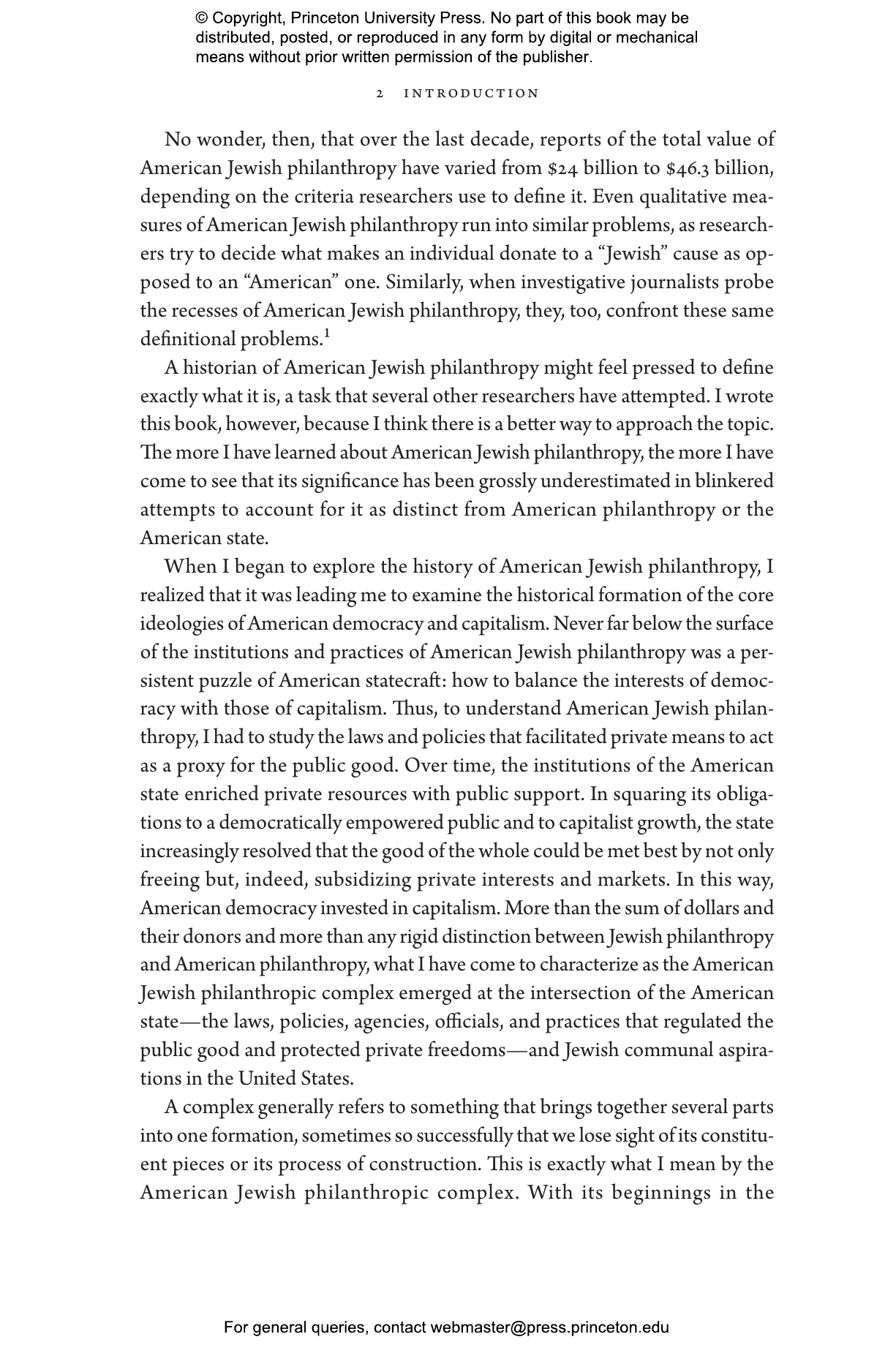 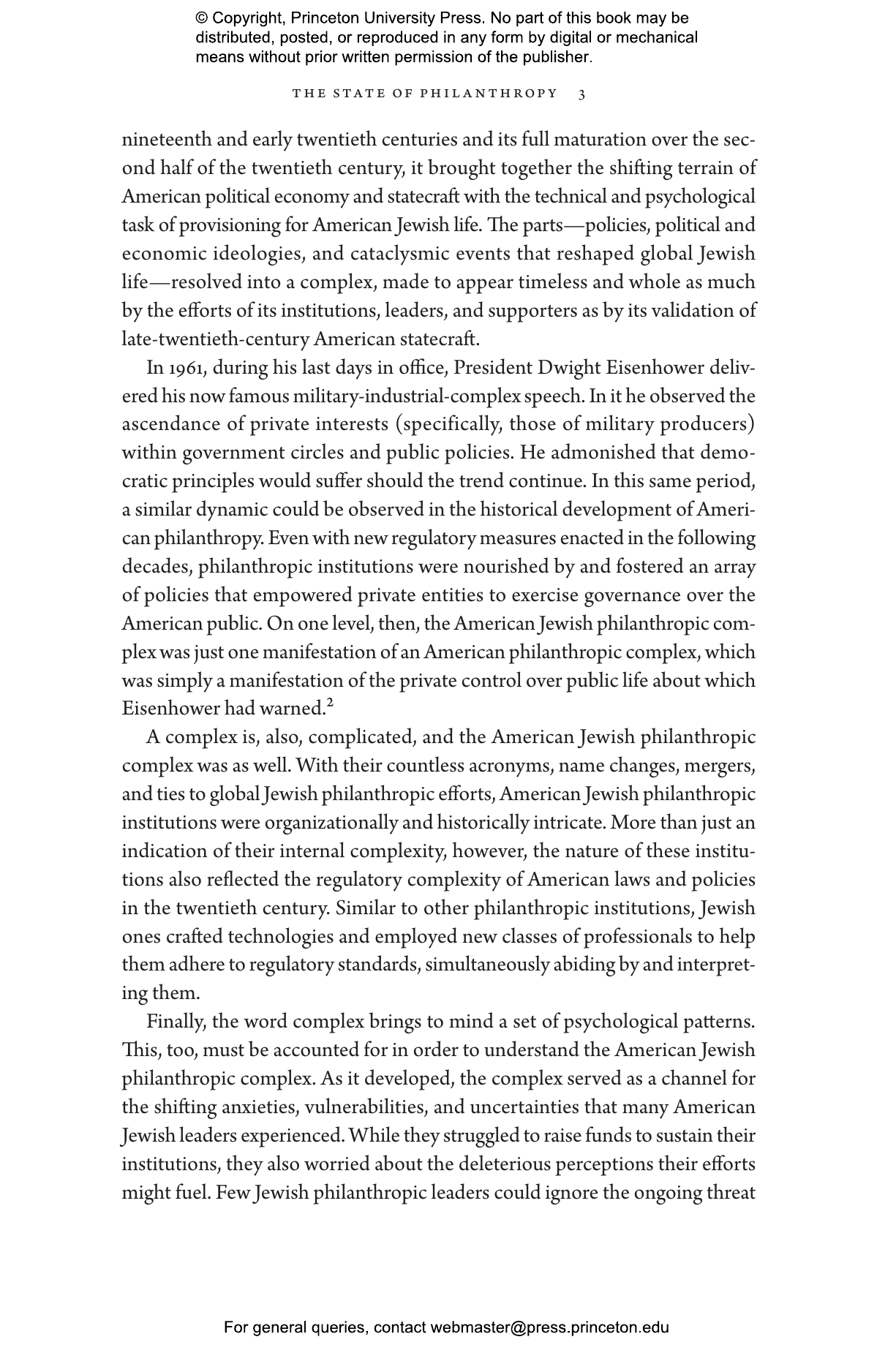 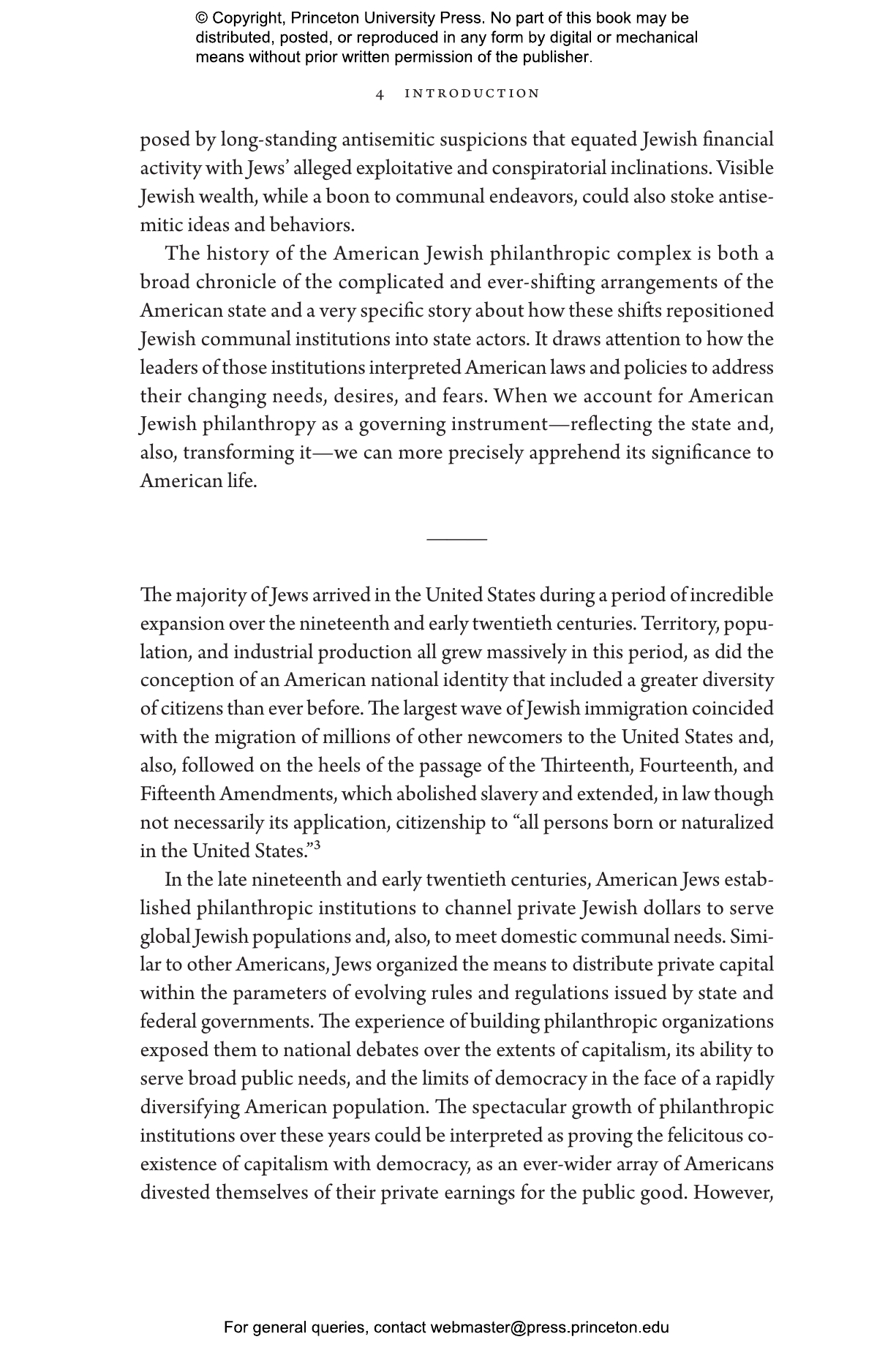 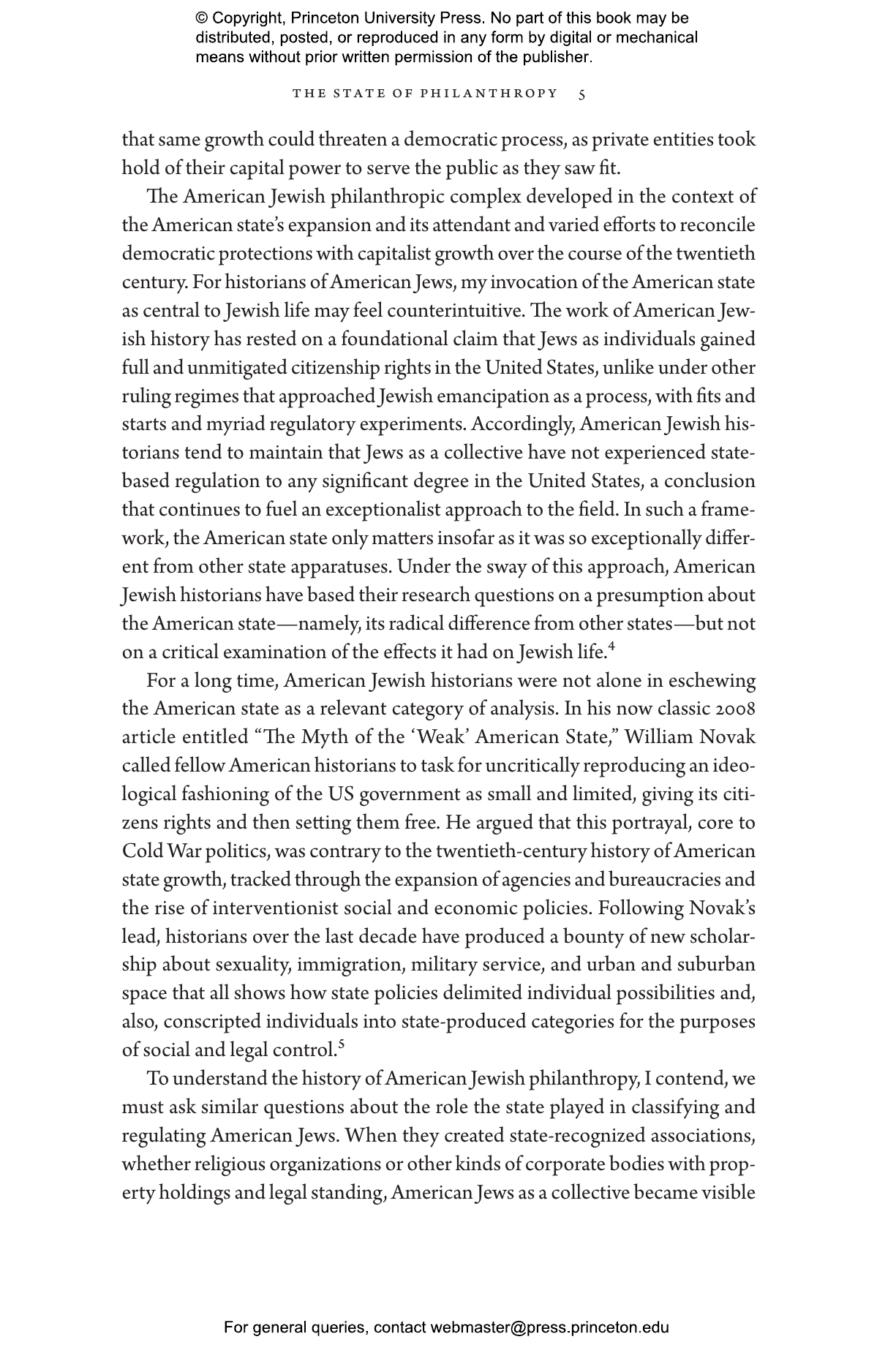 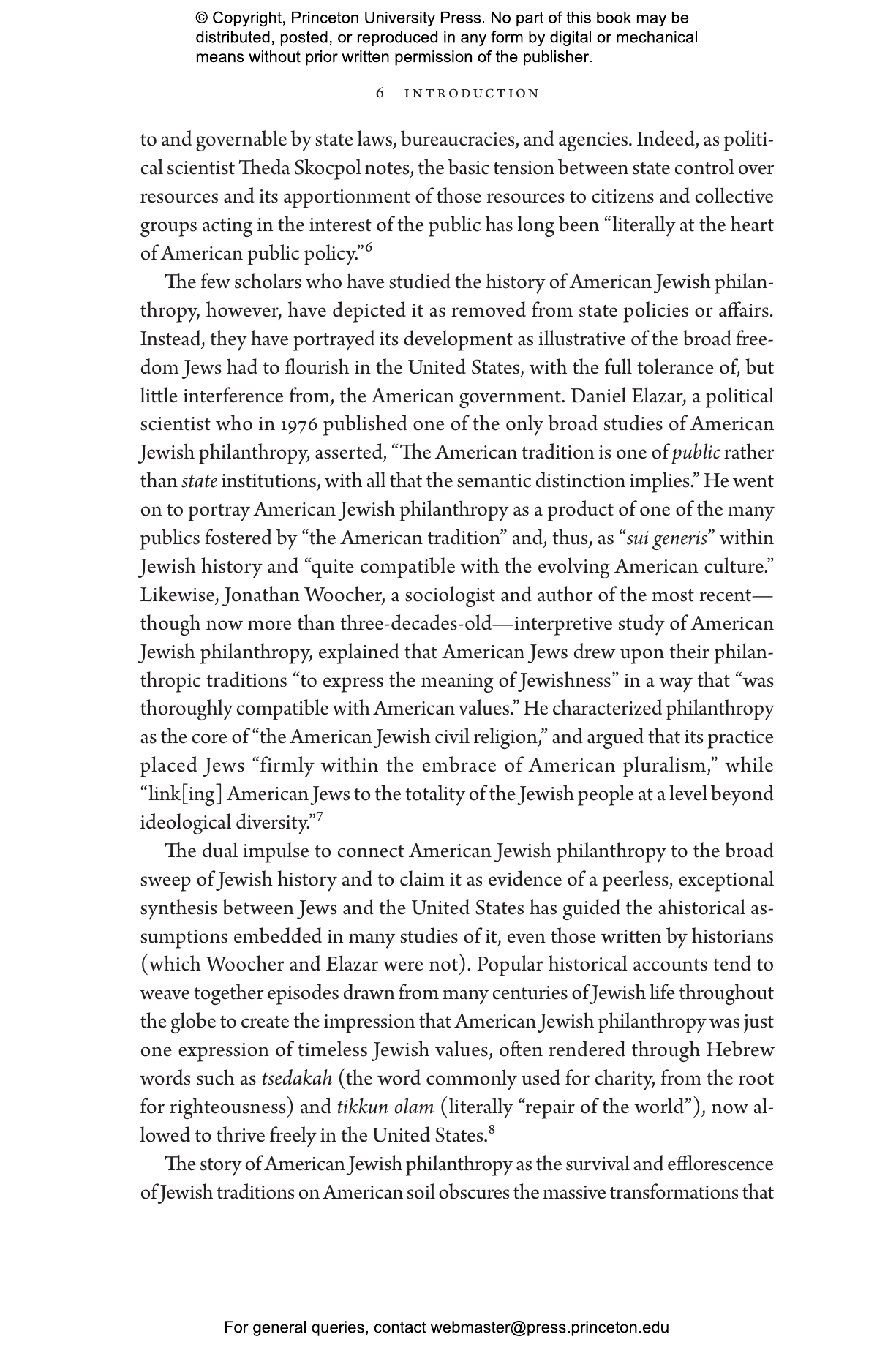 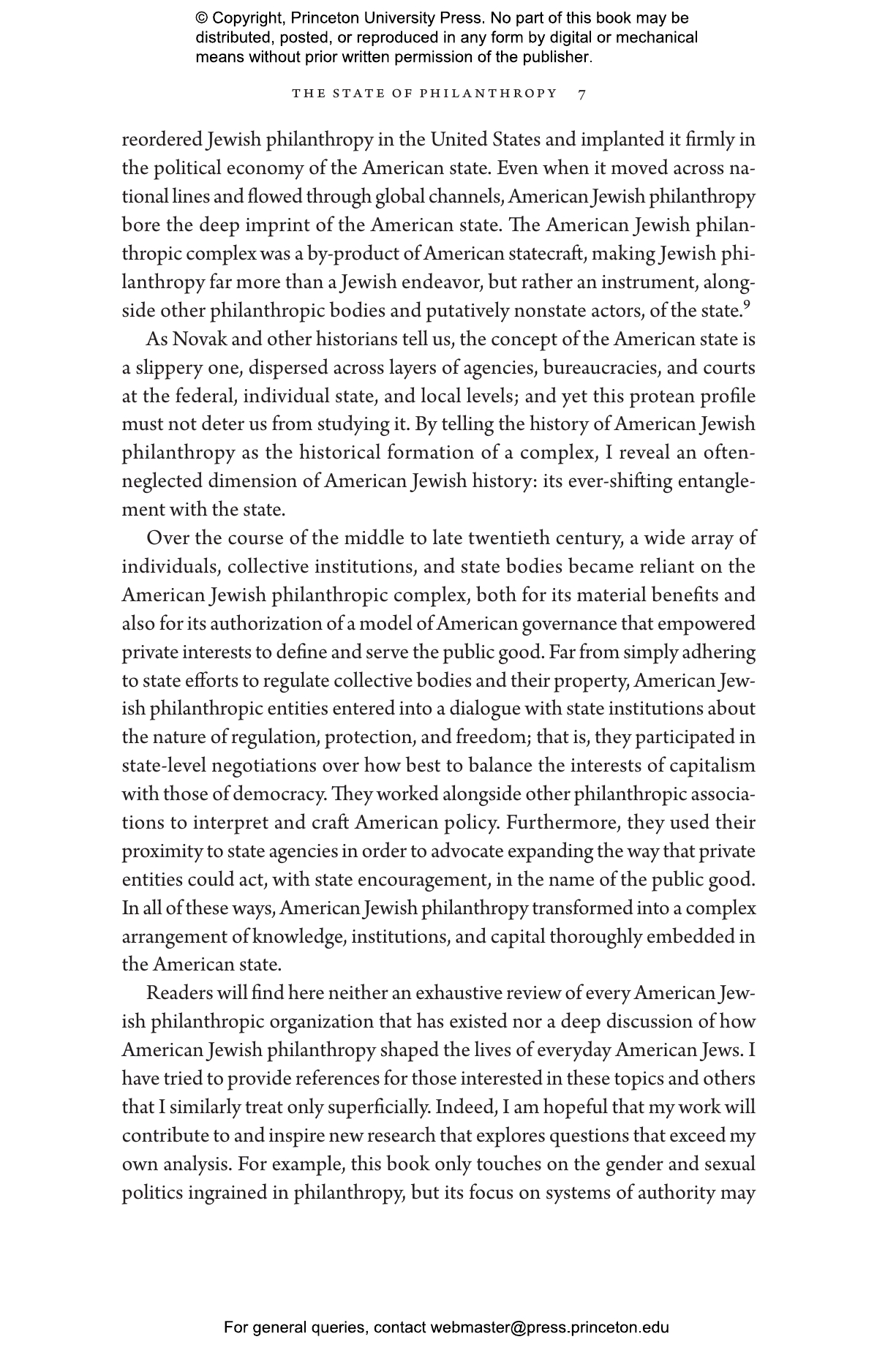 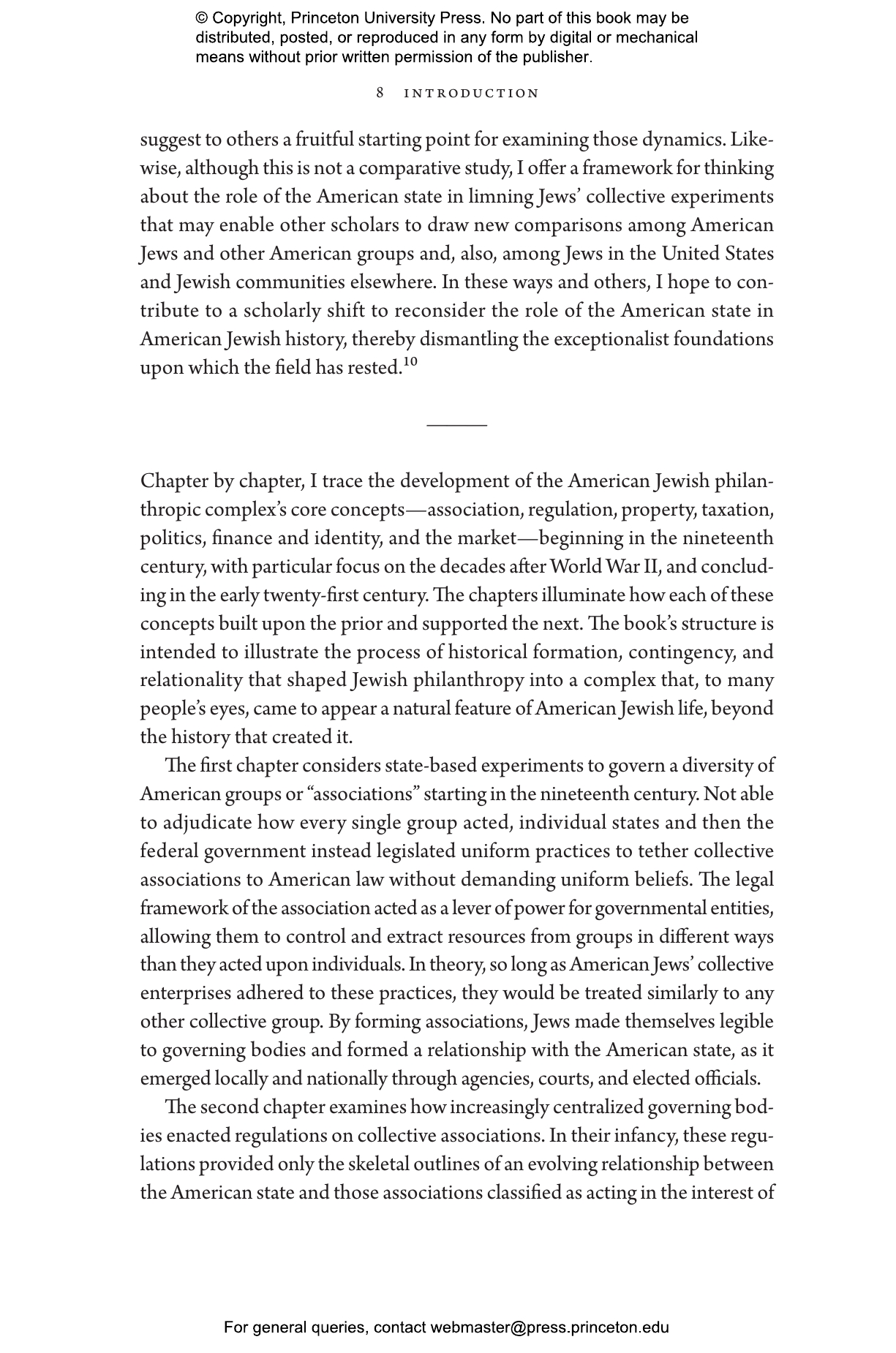 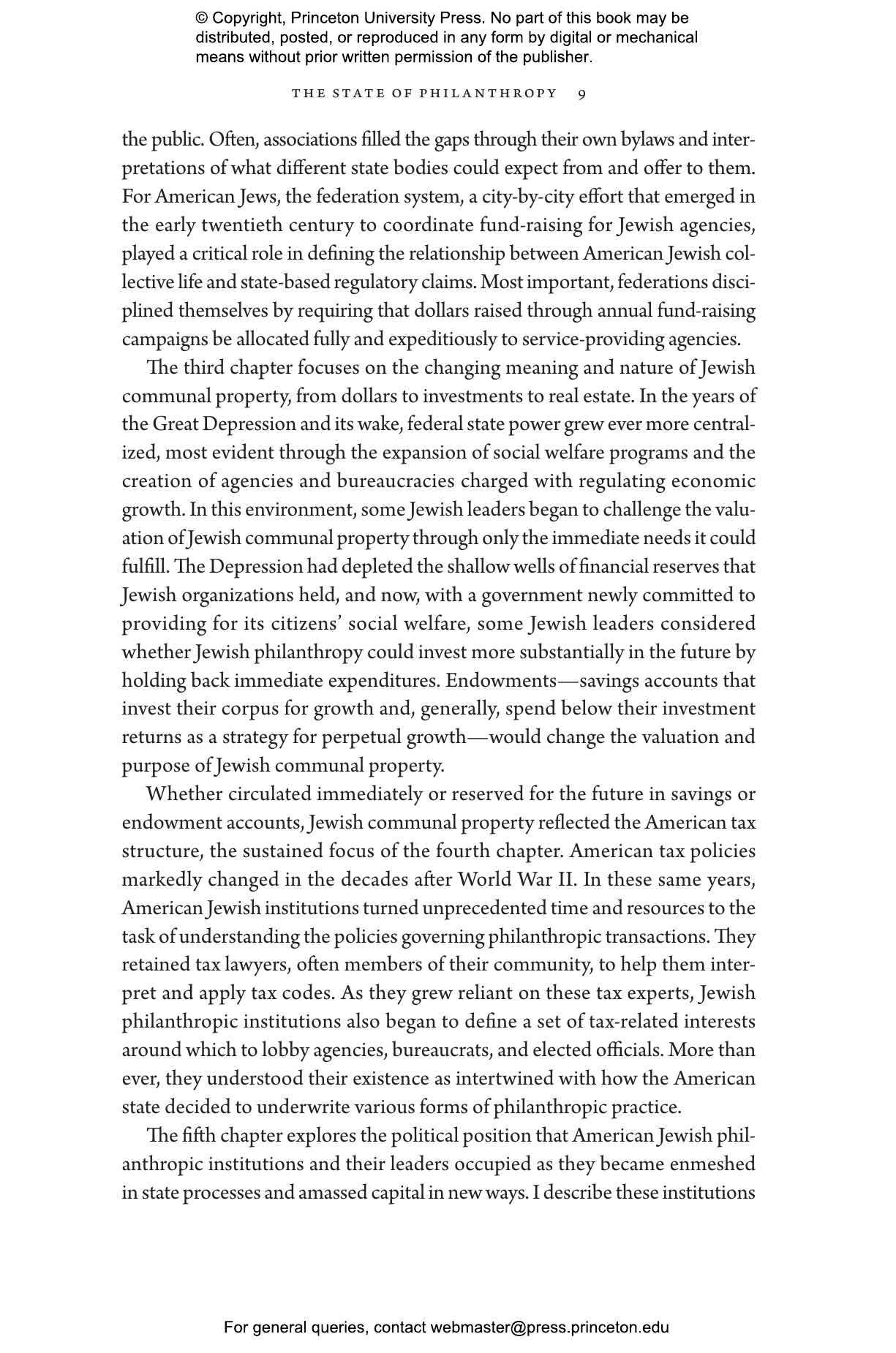 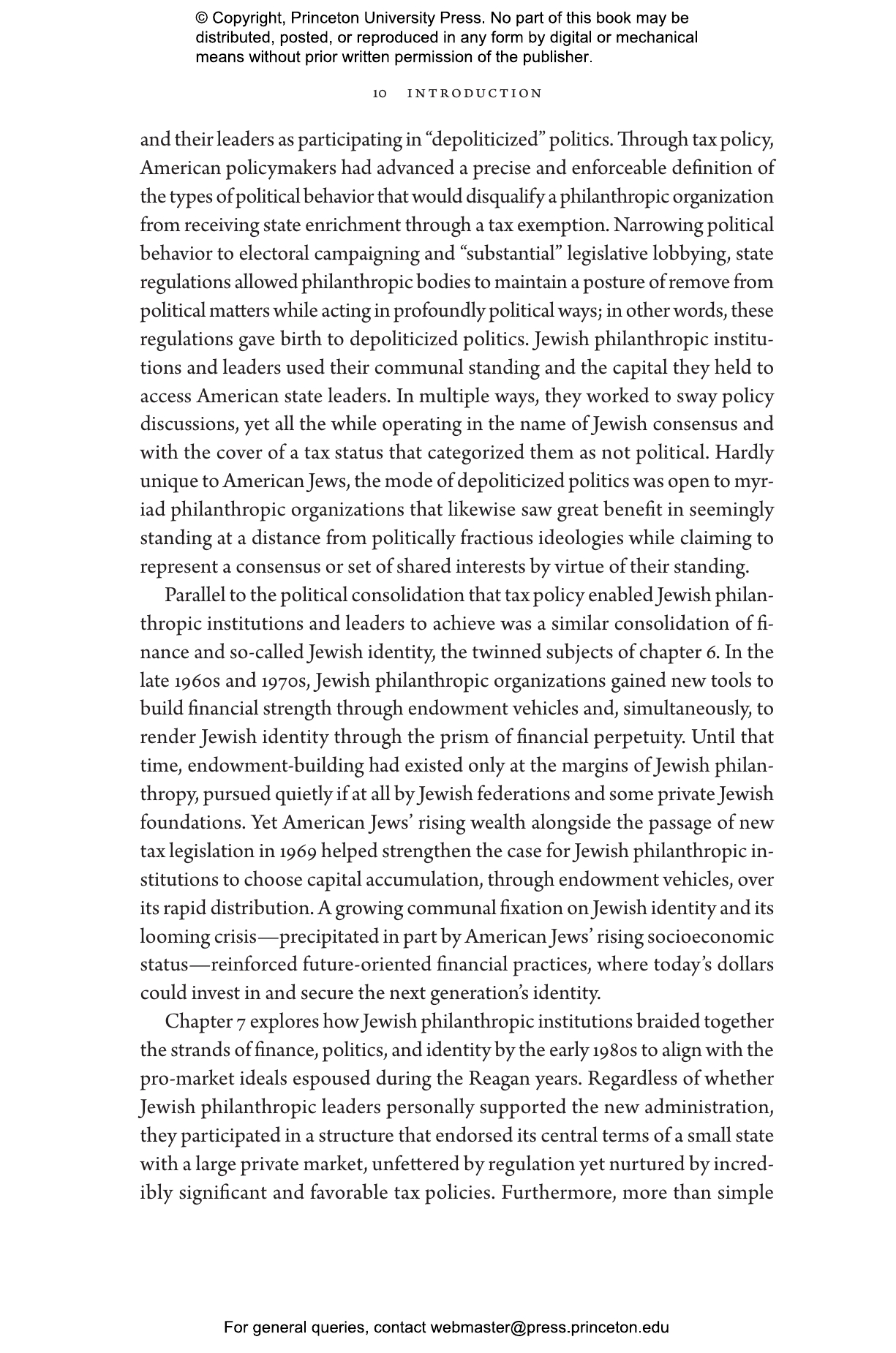 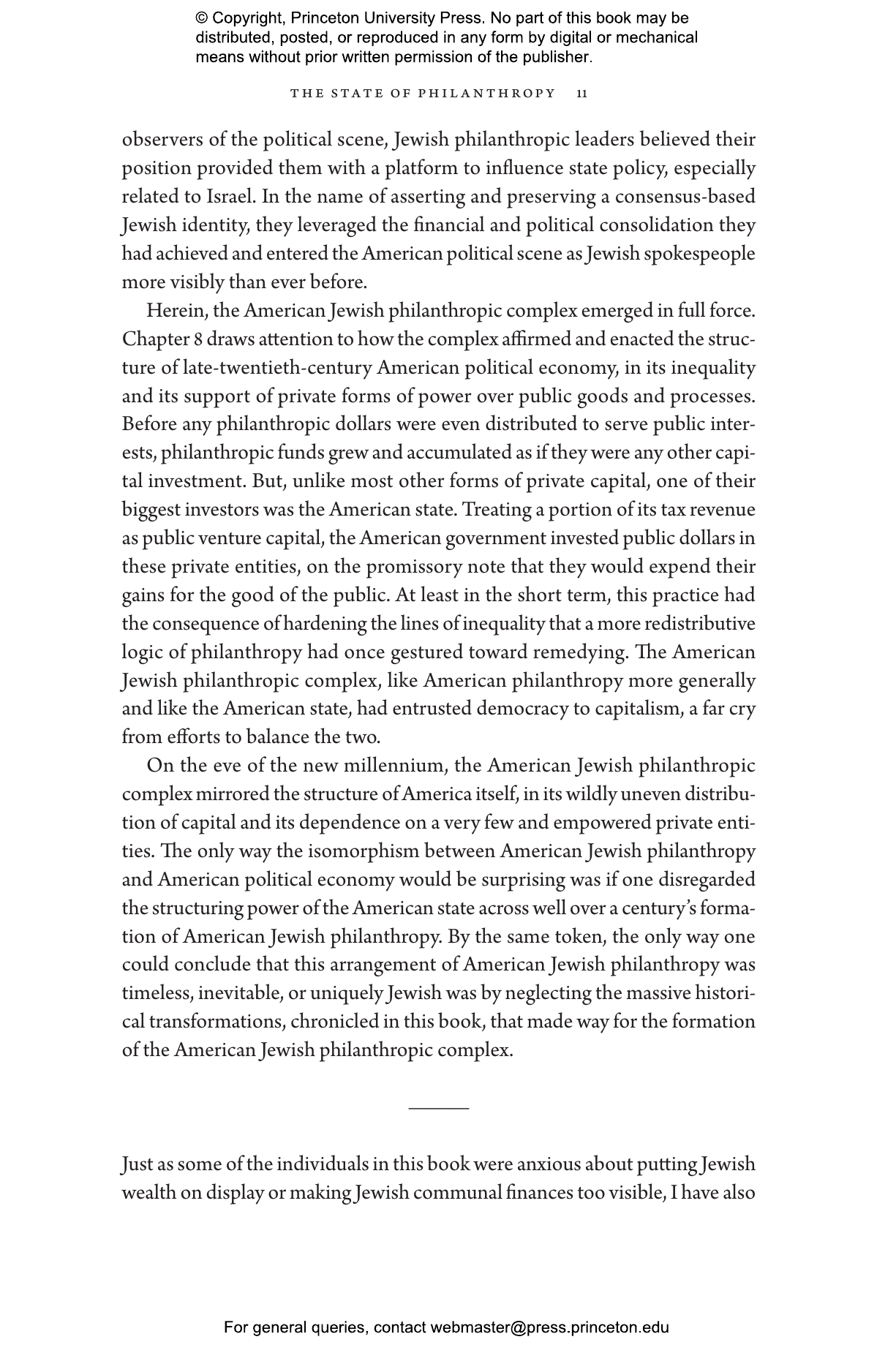 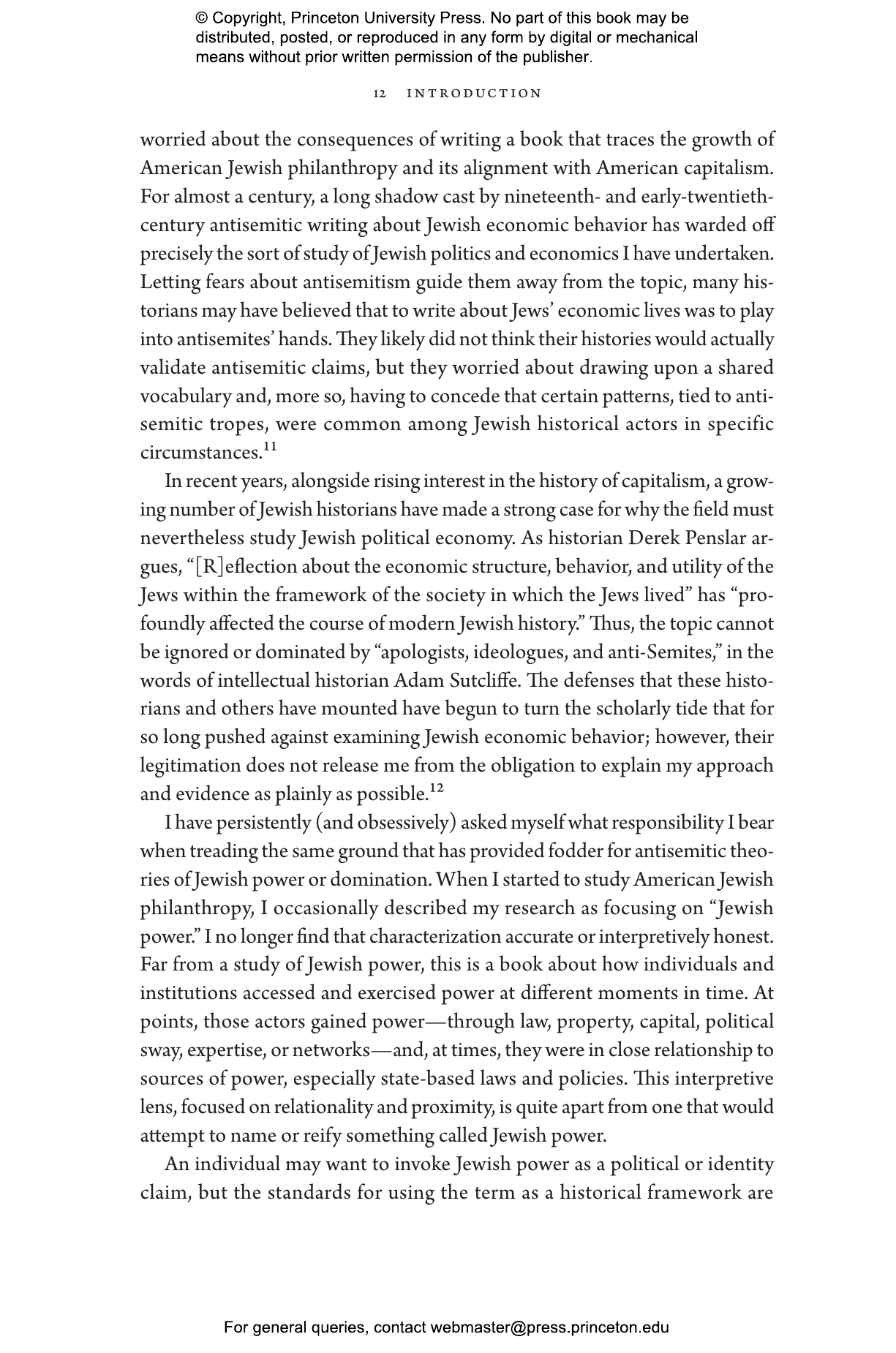 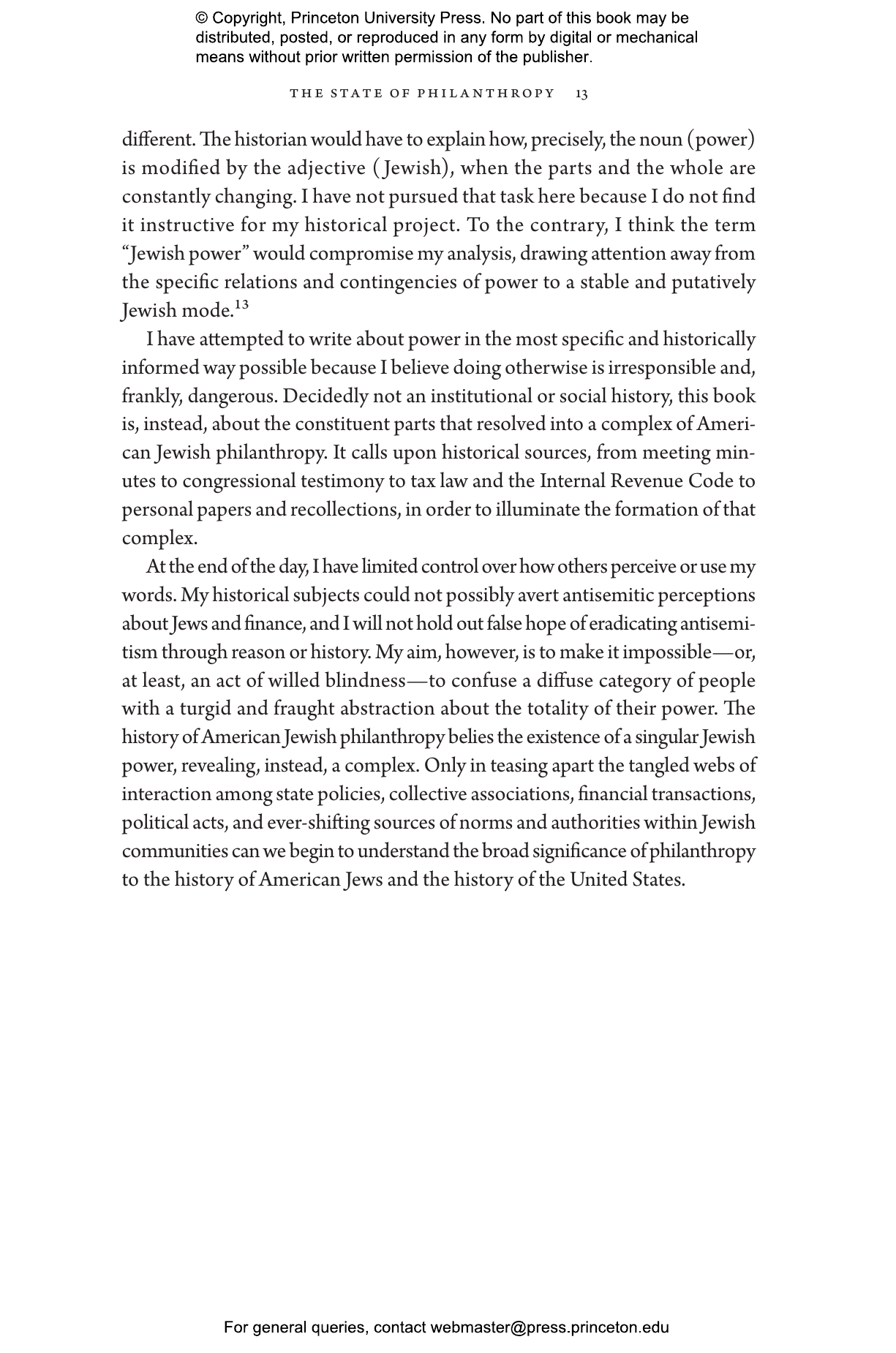 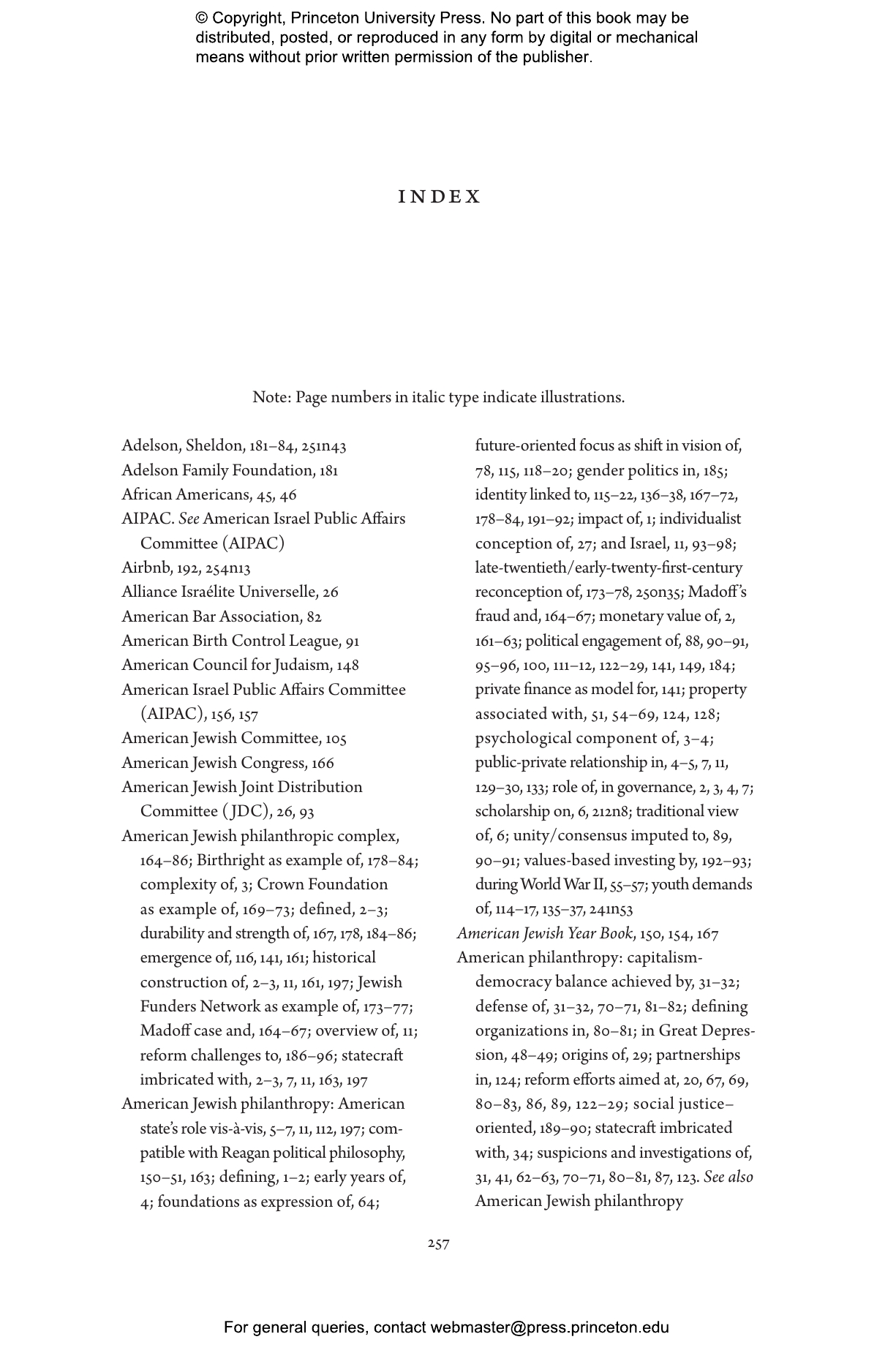 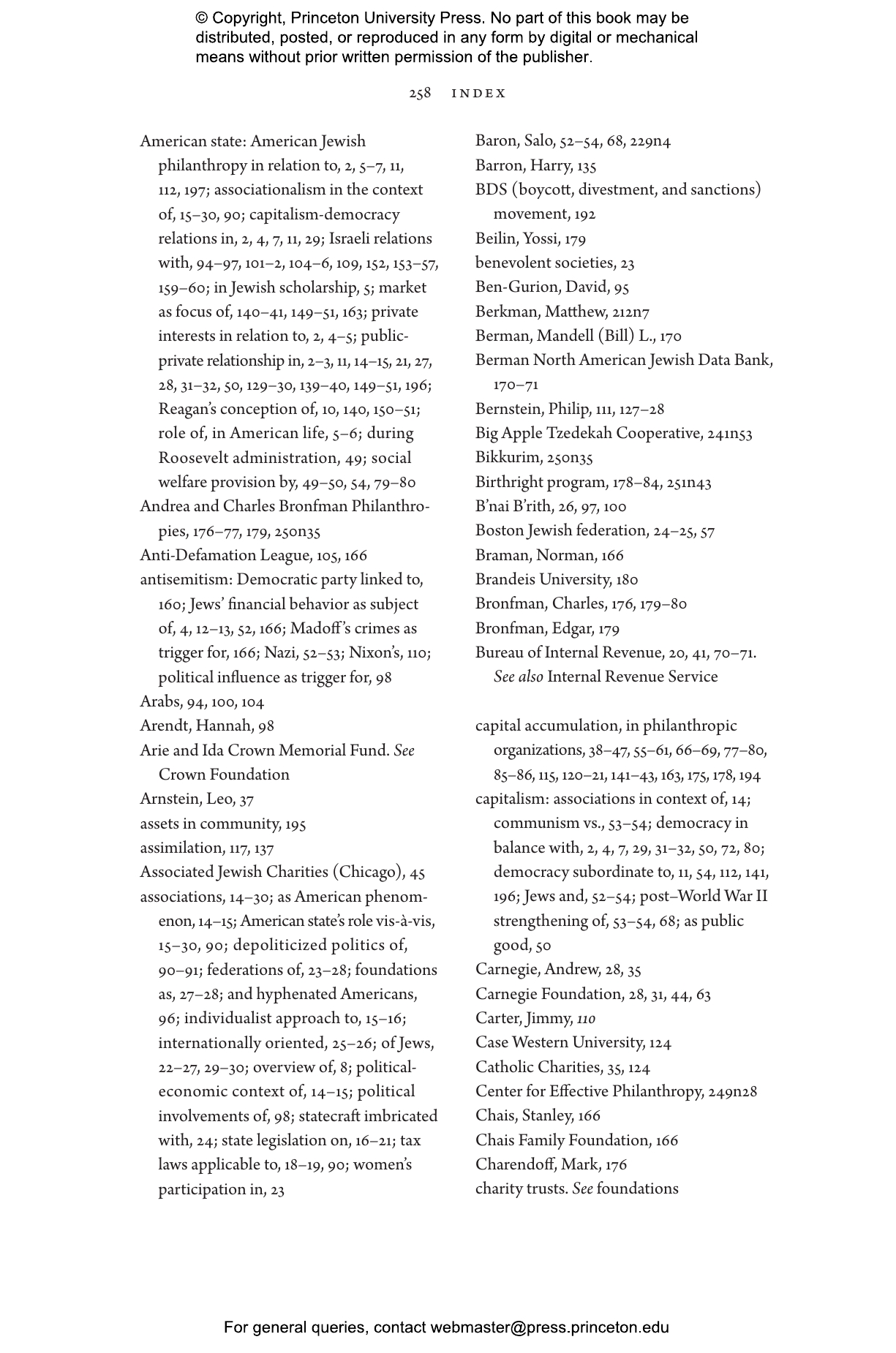 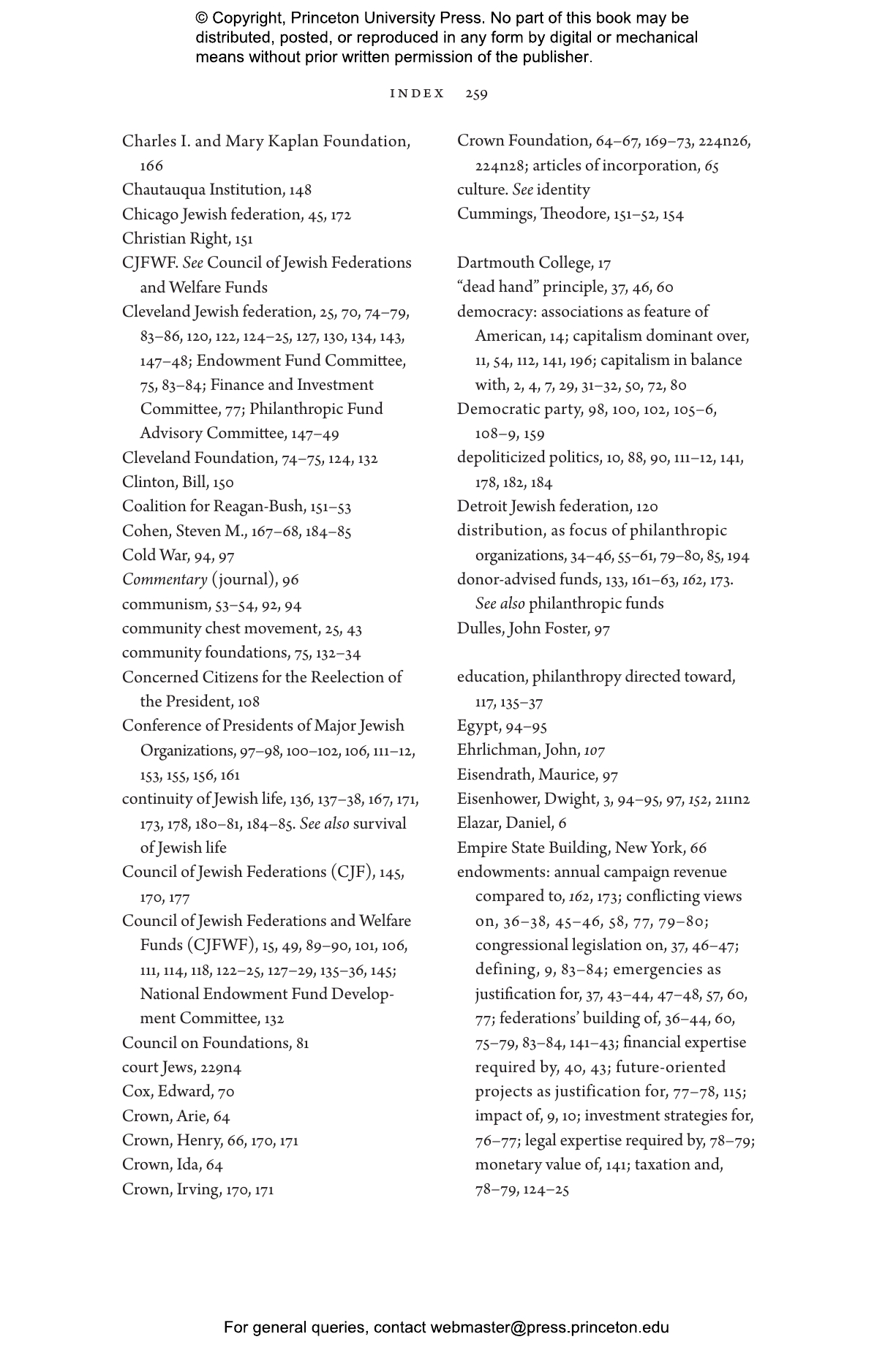 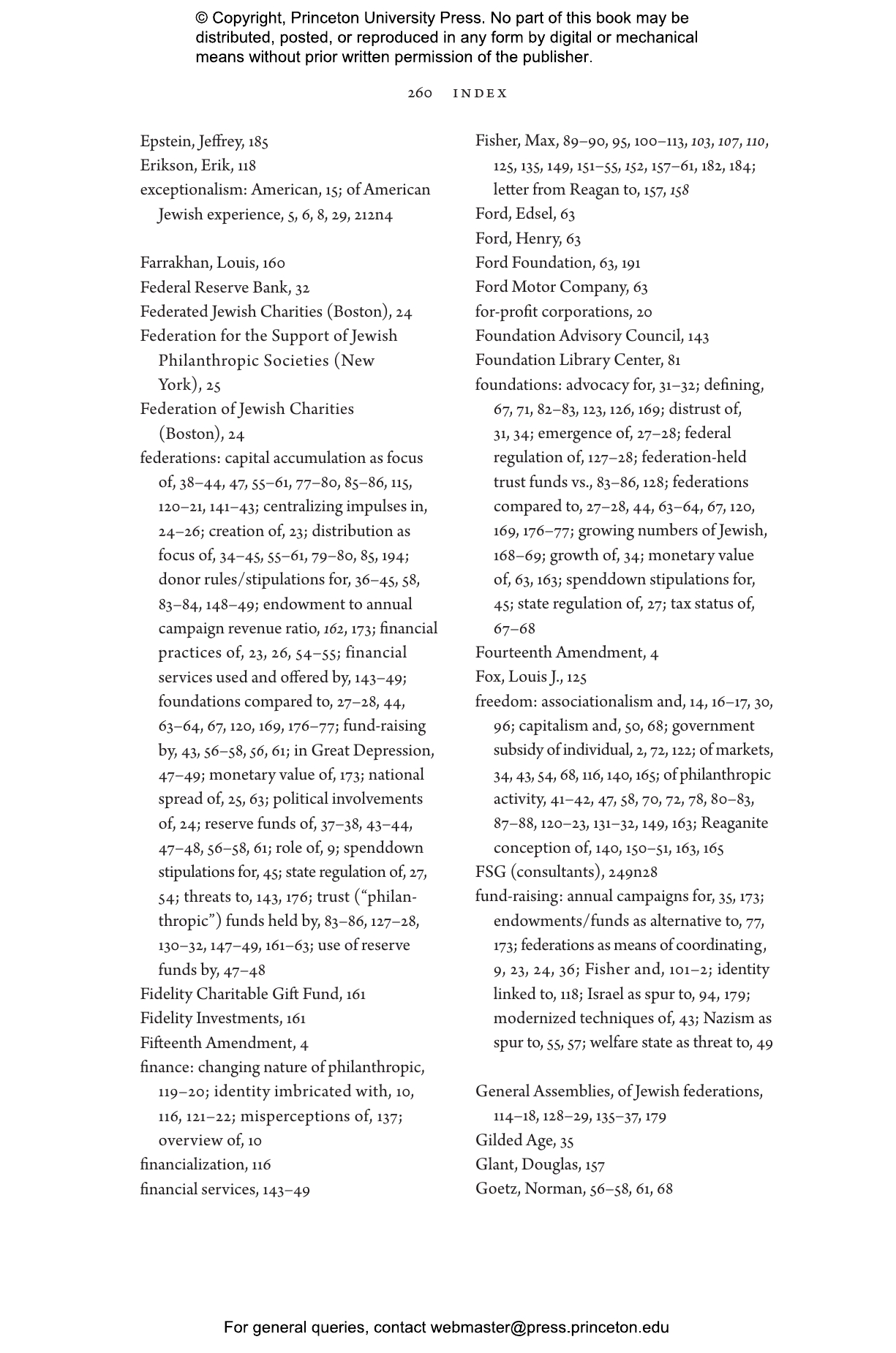 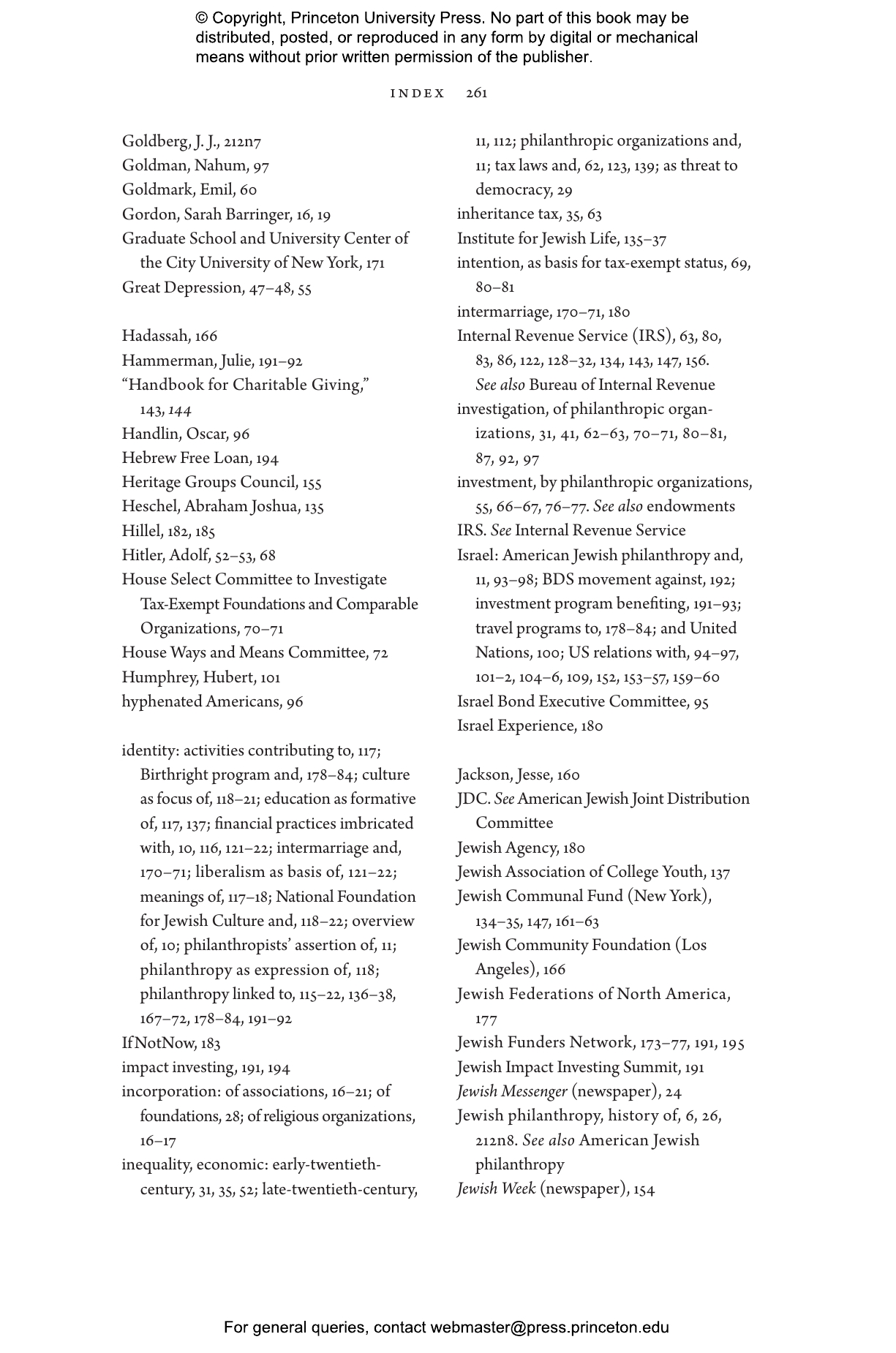 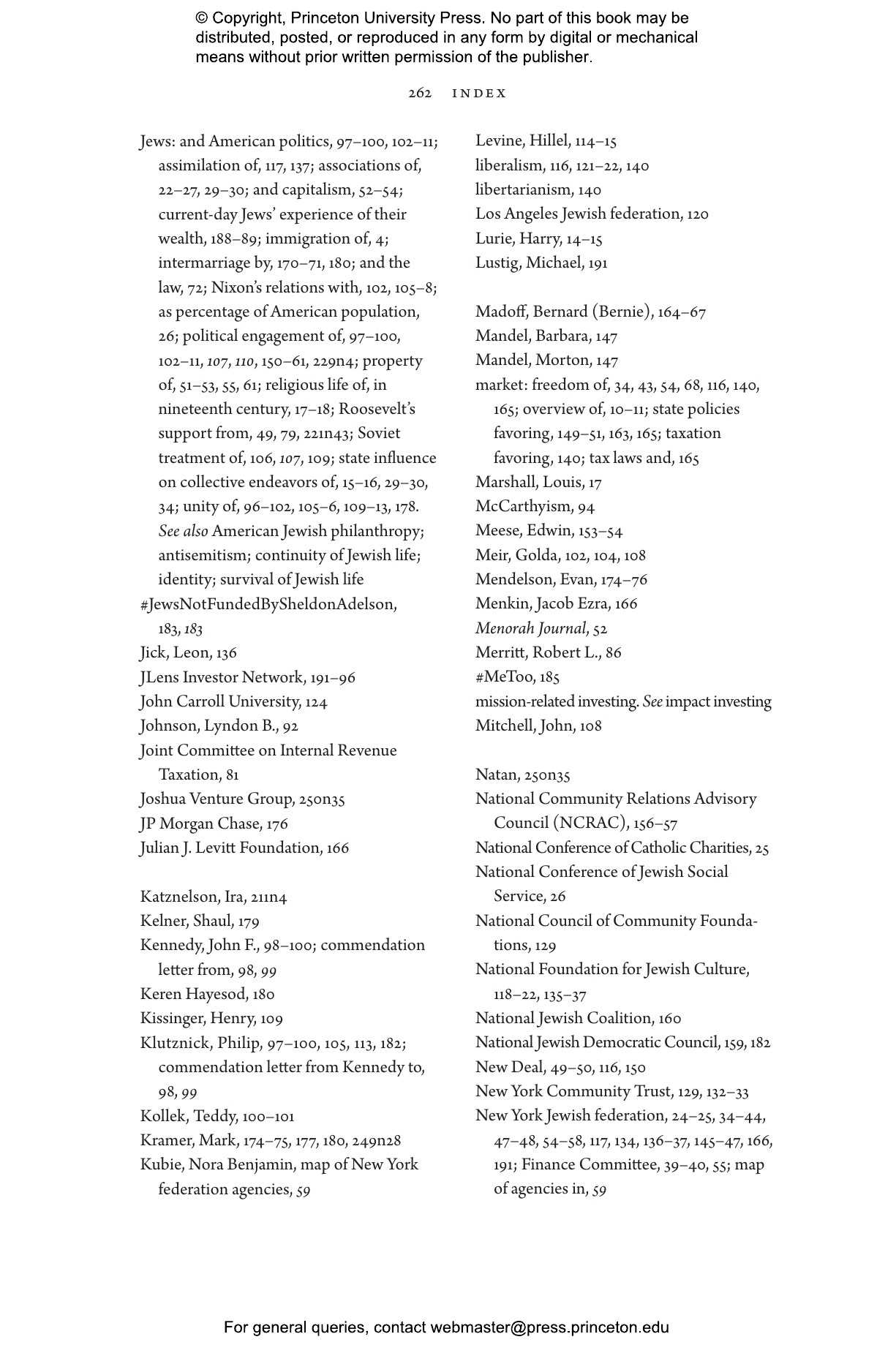 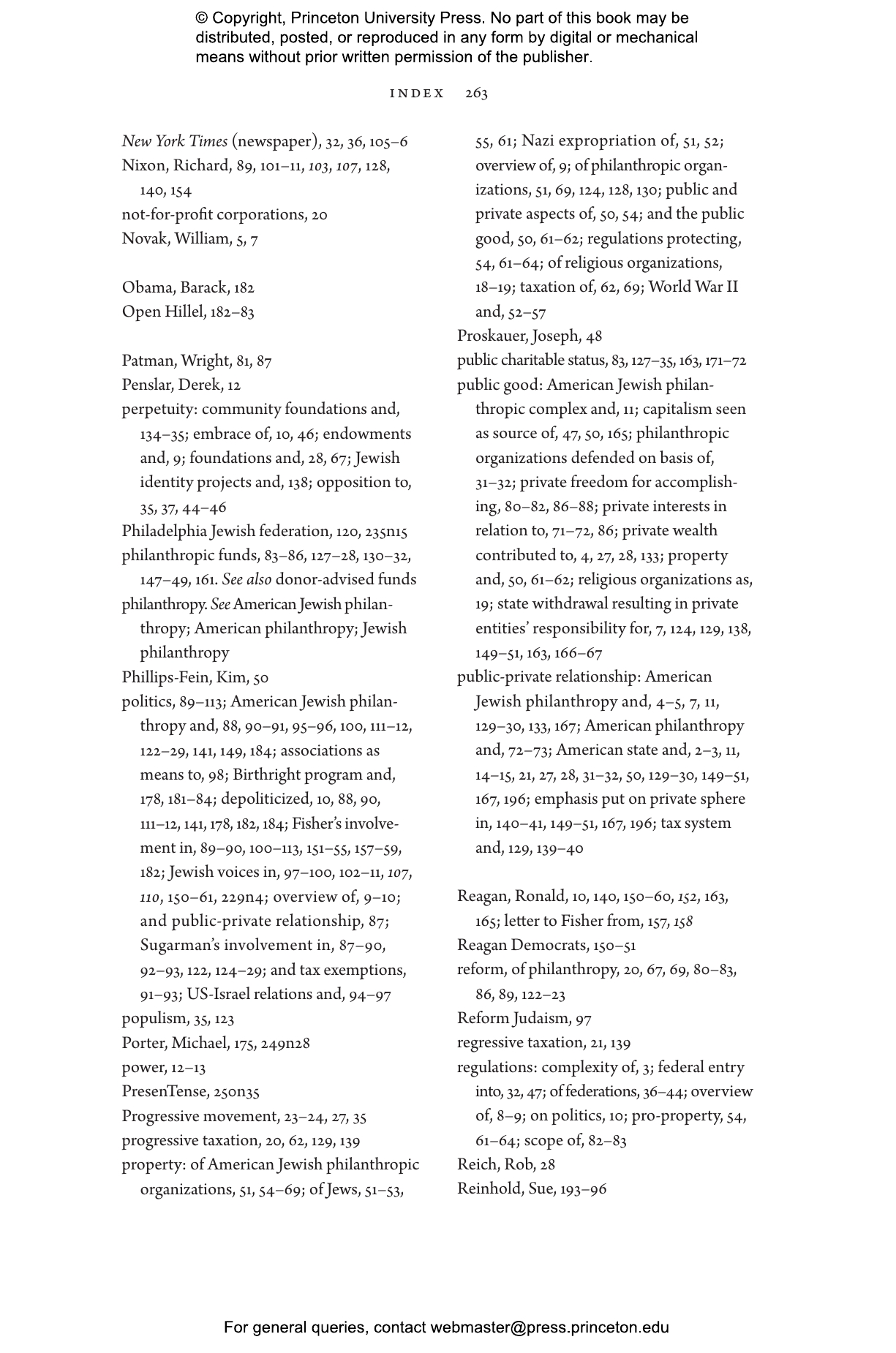 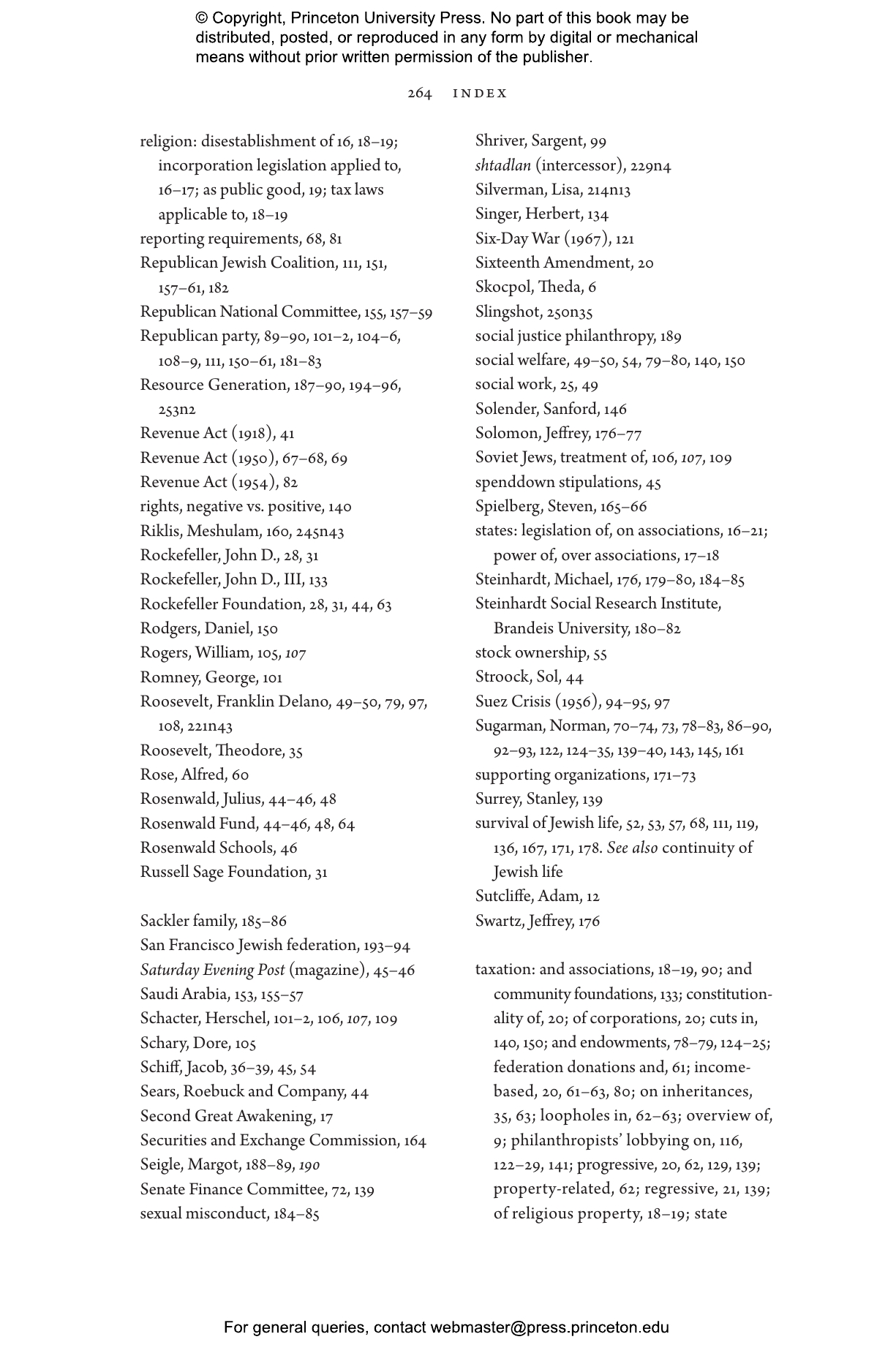 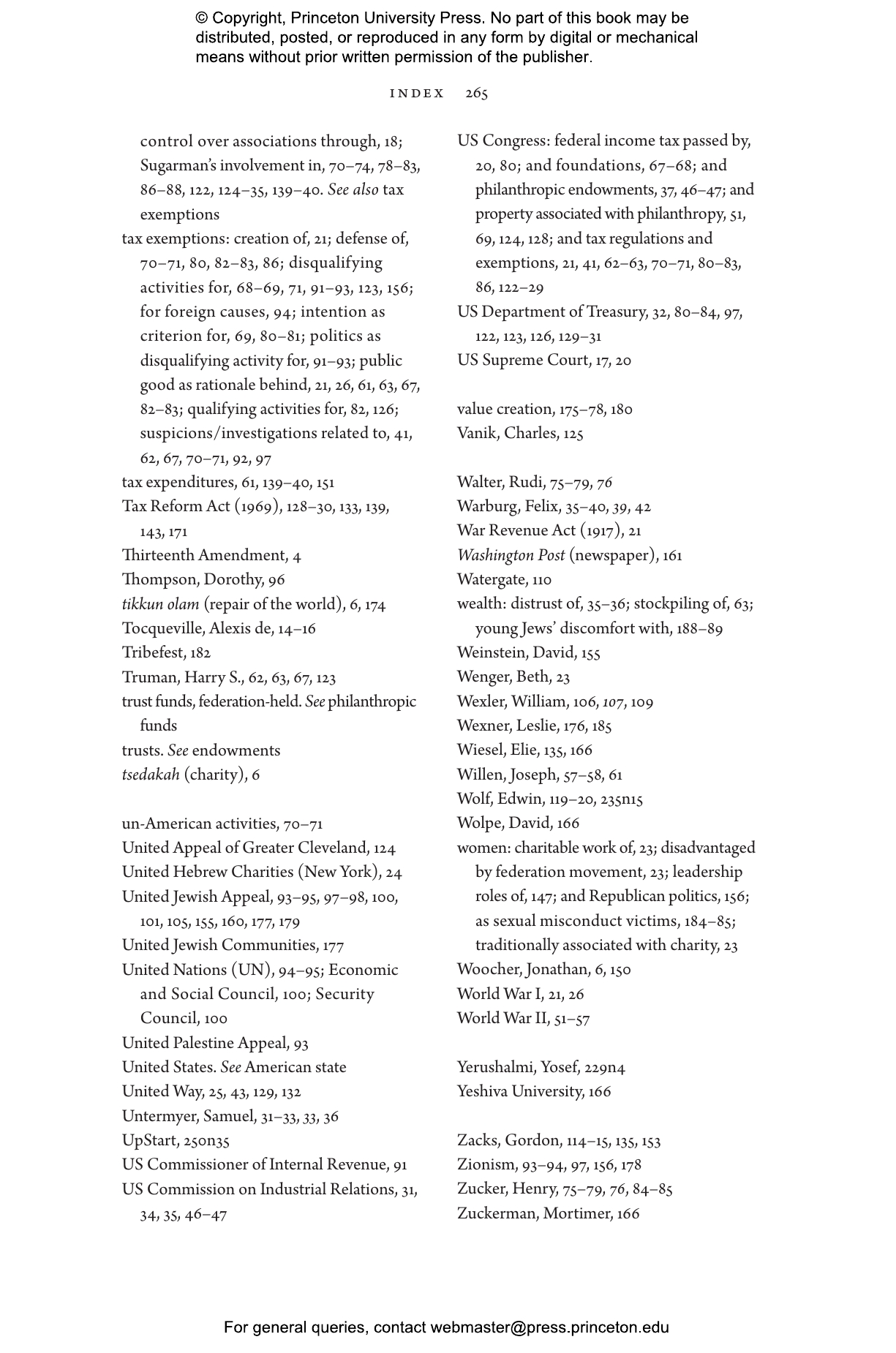 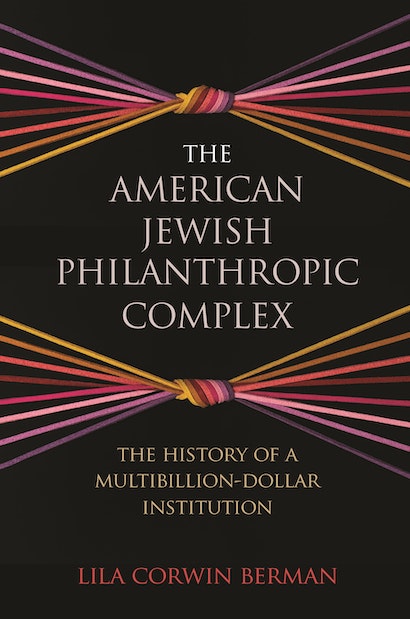 With a fresh eye and lucid prose, and relying on previously untapped sources, Berman shows that from its nineteenth-century roots to its apex in the late twentieth century, the American Jewish philanthropic complex tied Jewish institutions to the American state. The government’s regulatory efforts—most importantly, tax policies—situated philanthropy at the core of its experiments to maintain the public good without trammeling on the private freedoms of individuals. Jewish philanthropic institutions and leaders gained financial strength, political influence, and state protections within this framework. However, over time, the vast inequalities in resource distribution that marked American state policy became inseparable from philanthropic practice. By the turn of the millennium, Jewish philanthropic institutions reflected the state’s growing investment in capitalism against democratic interests. But well before that, Jewish philanthropy had already entered into a tight relationship with the governing forces of American life, reinforcing and even transforming the nation’s laws and policies.

The American Jewish Philanthropic Complex uncovers how capitalism and private interests came to command authority over the public good, in Jewish life and beyond.

Lila Corwin Berman is the Murray Friedman Chair of American Jewish History at Temple University, where she directs the Feinstein Center for American Jewish History. She is author of Metropolitan Jews: Politics, Race, and Religion in Postwar Detroit and Speaking of Jews: Rabbis, Intellectuals, and the Creation of an American Public Identity. 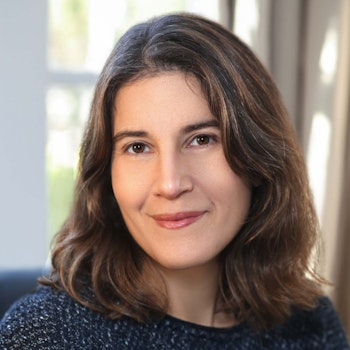 "A meaningful addition to the fields of Jewish studies and philanthropy."—Kirkus Reviews

"This is a solid academic work published by an academic press, but Berman’s lively prose serves her argument well."—Anne Nelson, Times Literary Supplement

"In the meticulously researched work, Berman — a professor of American Jewish history at Temple University — traces the history and the transformation of the extensive network of Jewish charitable organizations, exploring how they developed over time, and how that evolution was inextricably interconnected to both changing U.S. tax law and growing capitalistic sentiments."—Jewish Insider

"[Lila Corwin] Berman’s book provides an excellent lens to understand how the American political system and the creative approach to evolving tax laws enabled the development of a philanthropic system that is now a model for philanthropy beyond the Jewish community."—eJewish Philanthropy

"This is a solid academic work published by an academic press, but Berman’s lively prose serves her argument well."—Anne Nelson, Times Literary Supplement

"In this supremely intelligent book, Lila Corwin Berman finds in Jewish charitable institutions, legal experts, and magnates a case study of the financialization of American philanthropy over the course of the twentieth and early twenty-first centuries. This timely and provocative work merits careful reading and serious discussion by activists in, as well as scholars of, American philanthropy."—Derek Penslar, Harvard University

"The American Jewish Philanthropic Complex introduces a fresh interpretation of Jewish philanthropy in the United States and integrates its innovative analysis into a substantial literature on American political economy. Bold in its argument, this important book will generate considerable discussion."—Deborah Dash Moore, University of Michigan, Ann Arbor

"In The American Jewish Philanthropic Complex, Lila Corwin Berman advances a significant argument about the relationship of American Jews to the state, revealing the degree to which Jewish communal structures are bound up with the country’s legal-financial system. Her book charts new, exciting territory."—Tony Michels, University of Wisconsin–Madison