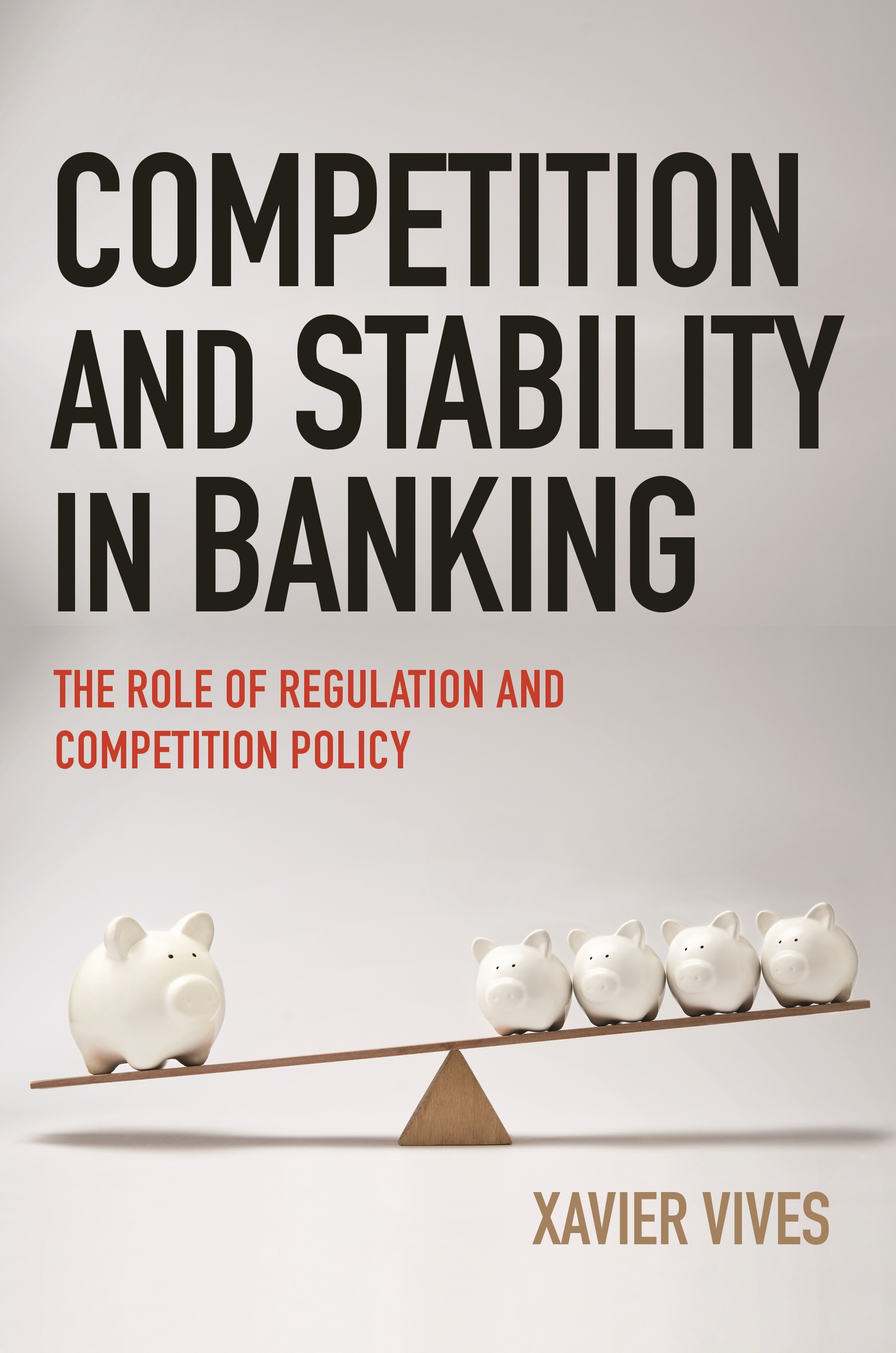 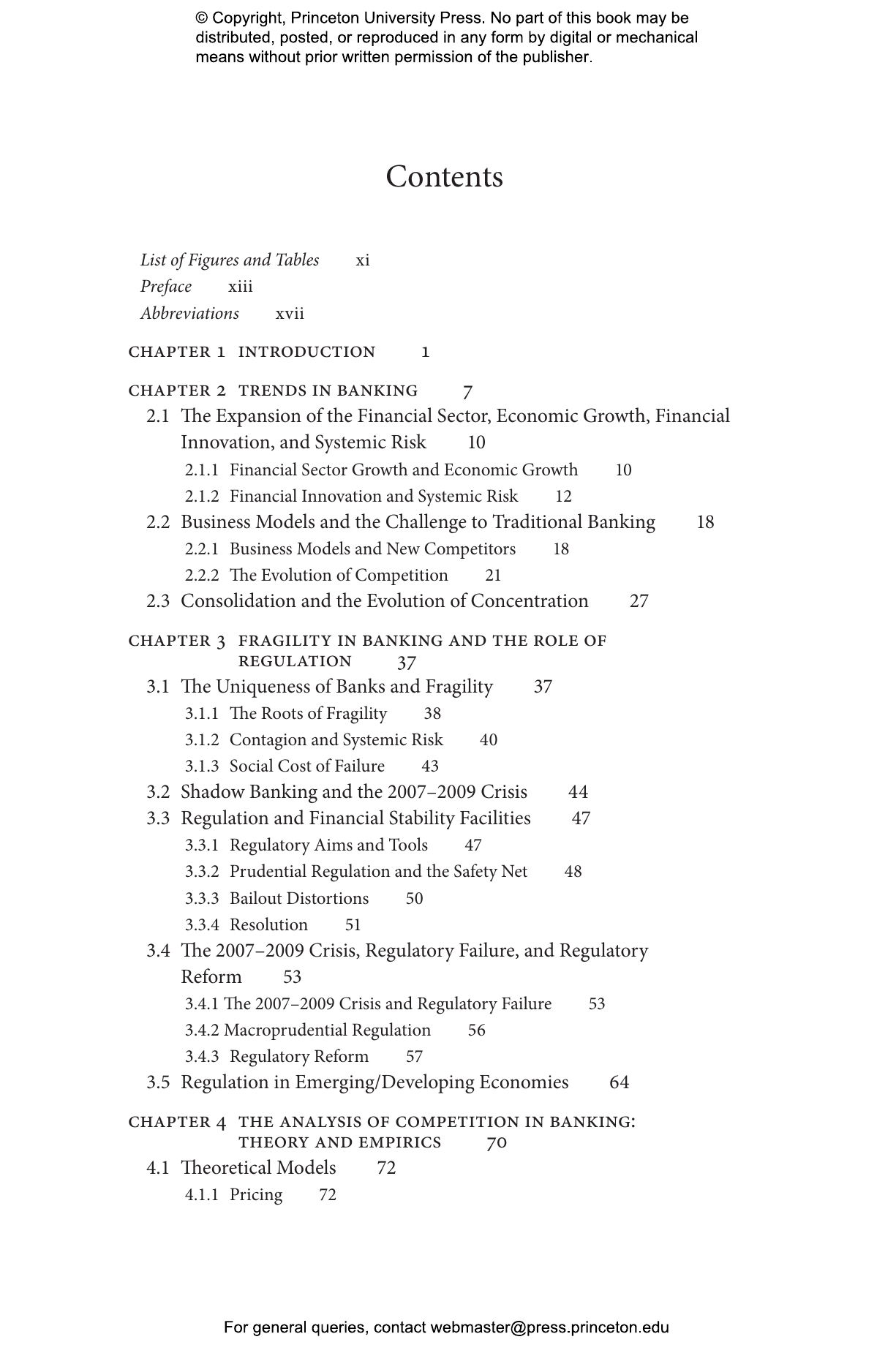 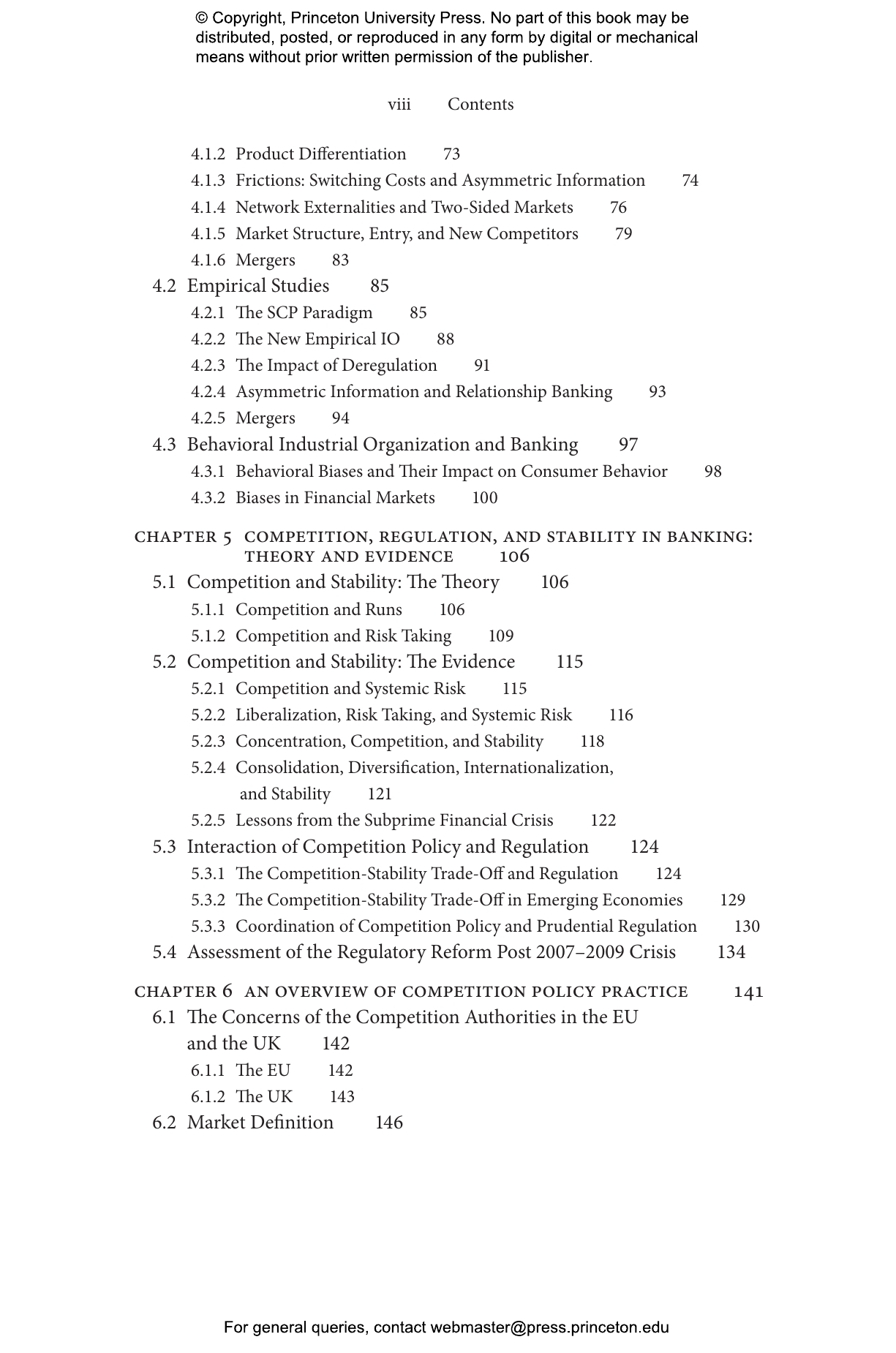 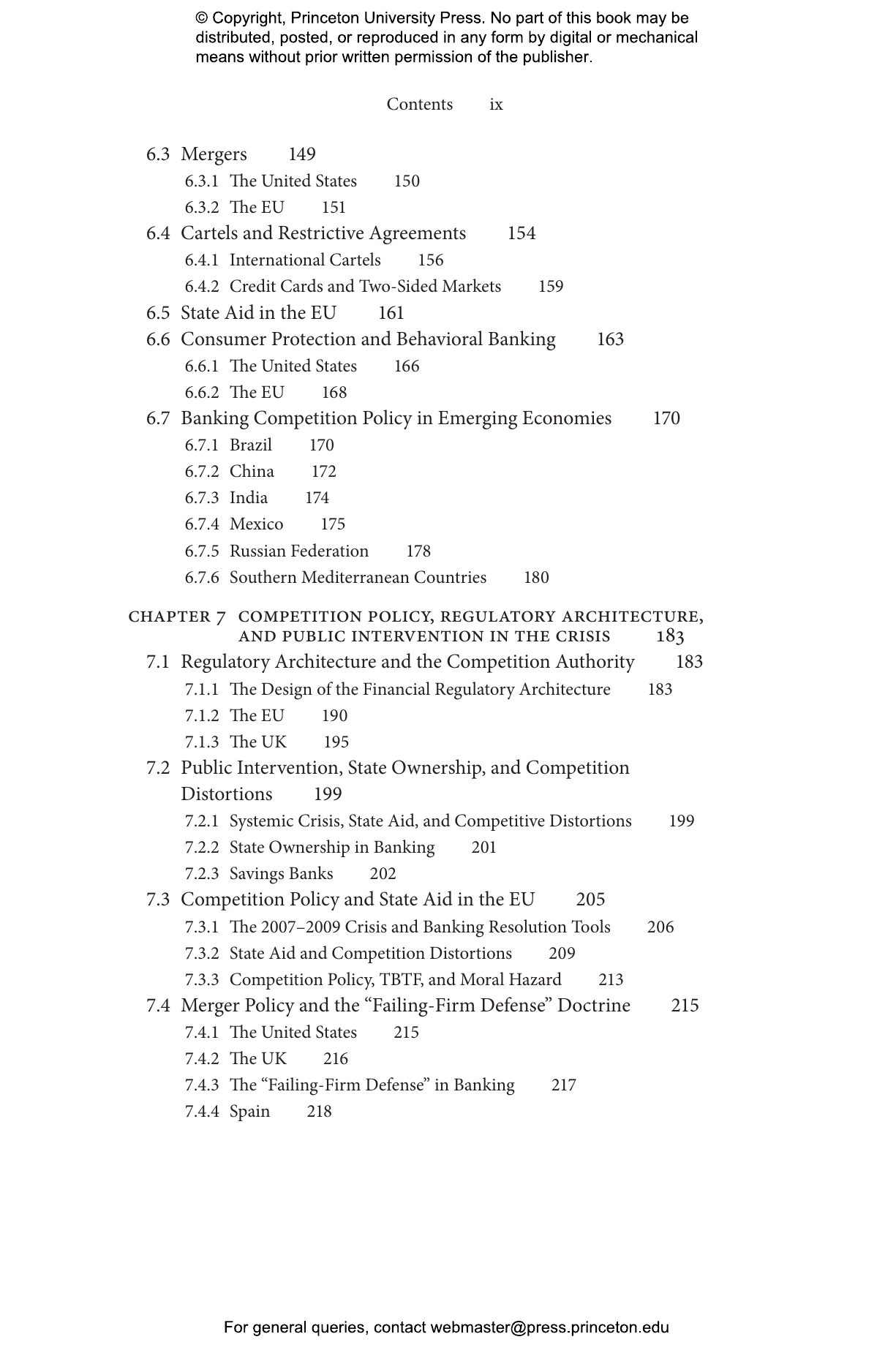 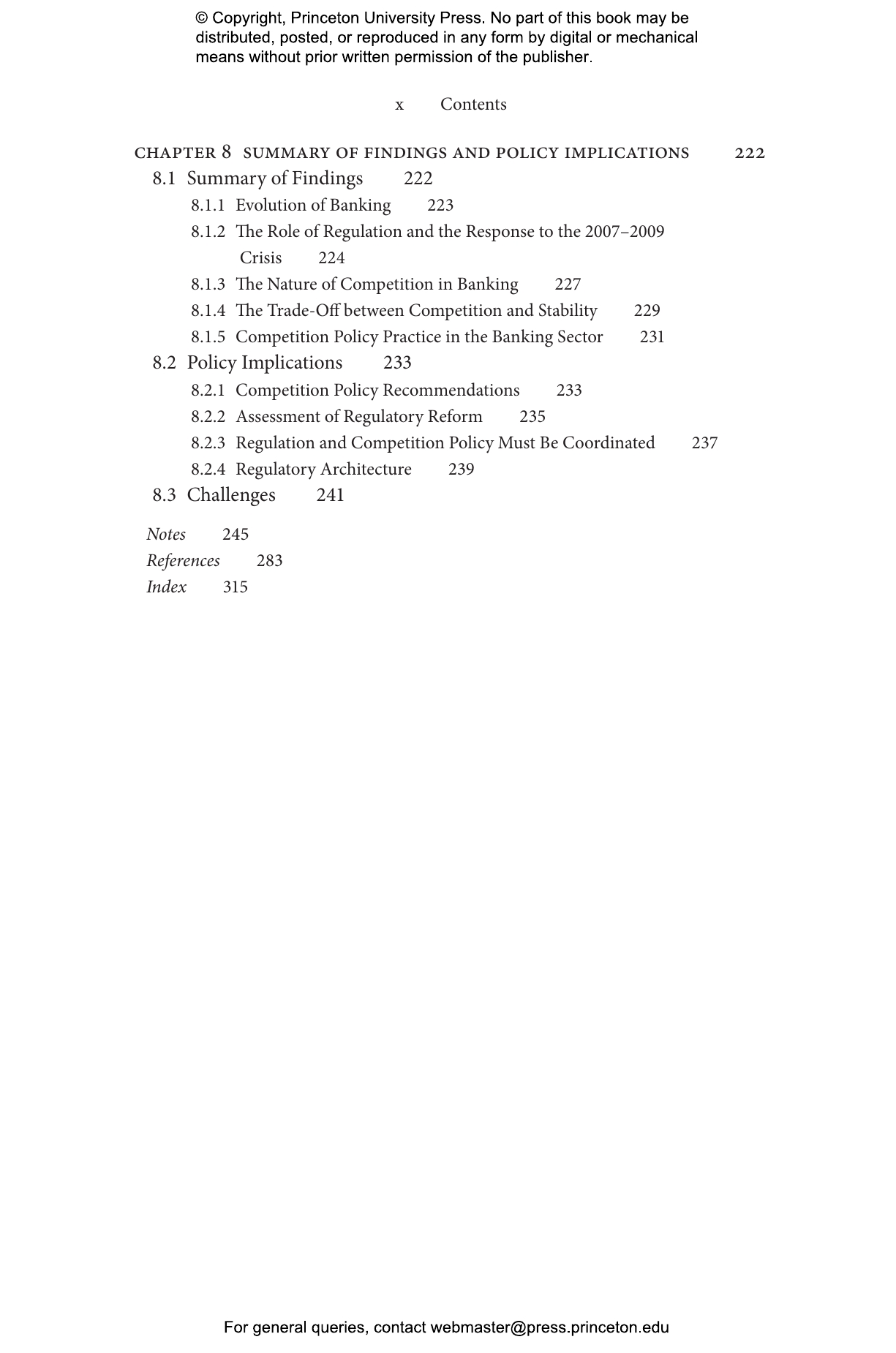 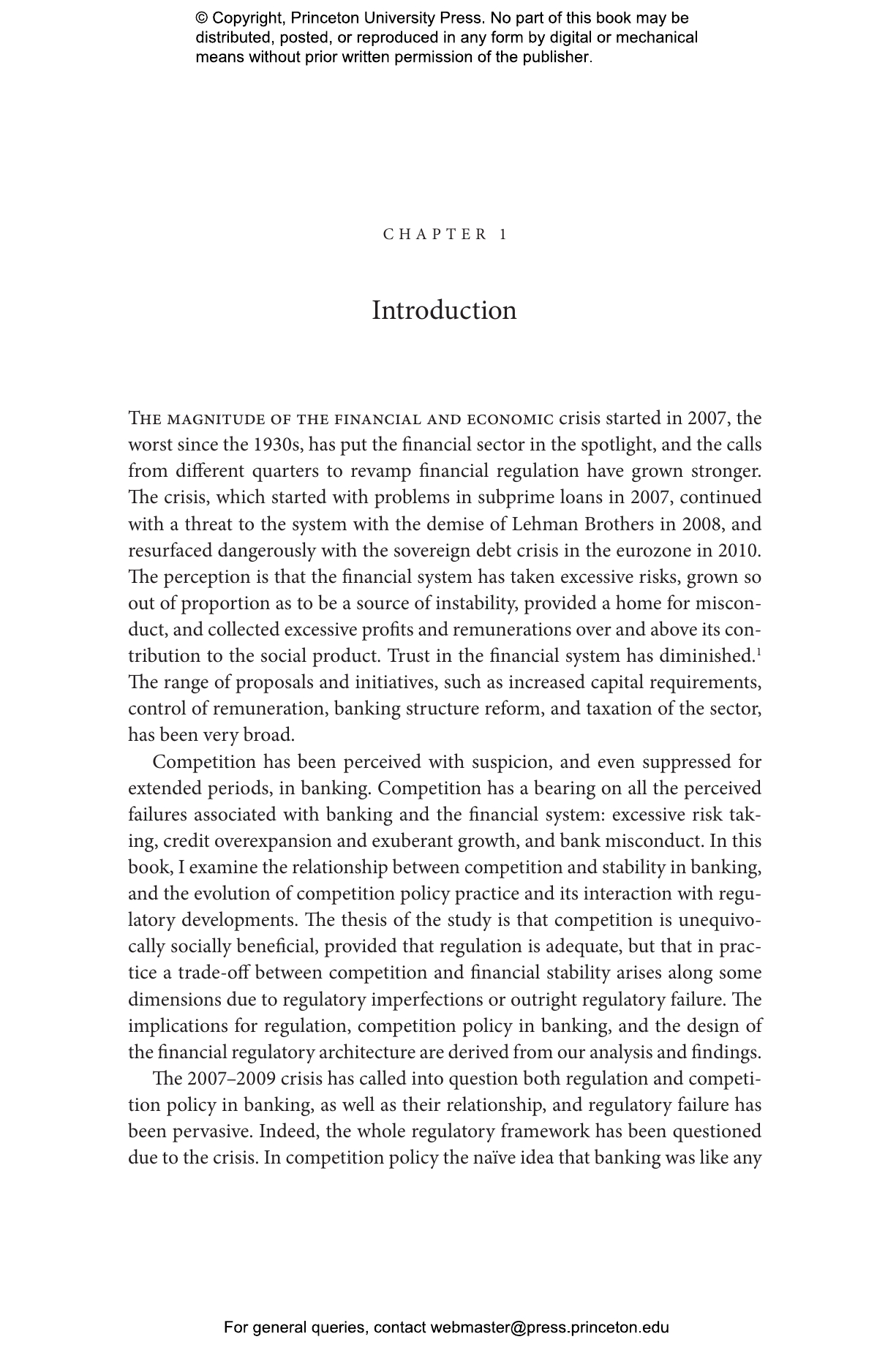 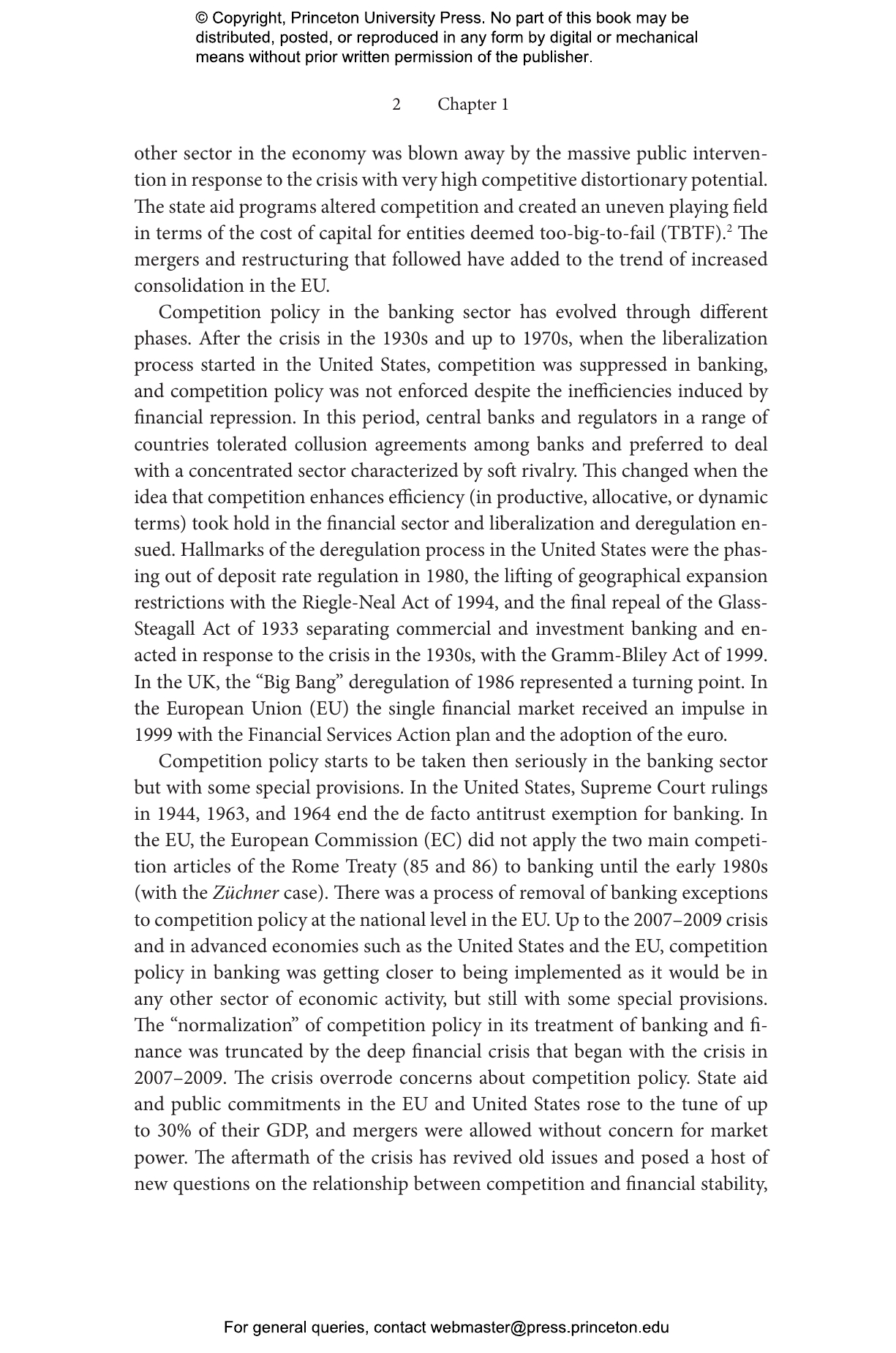 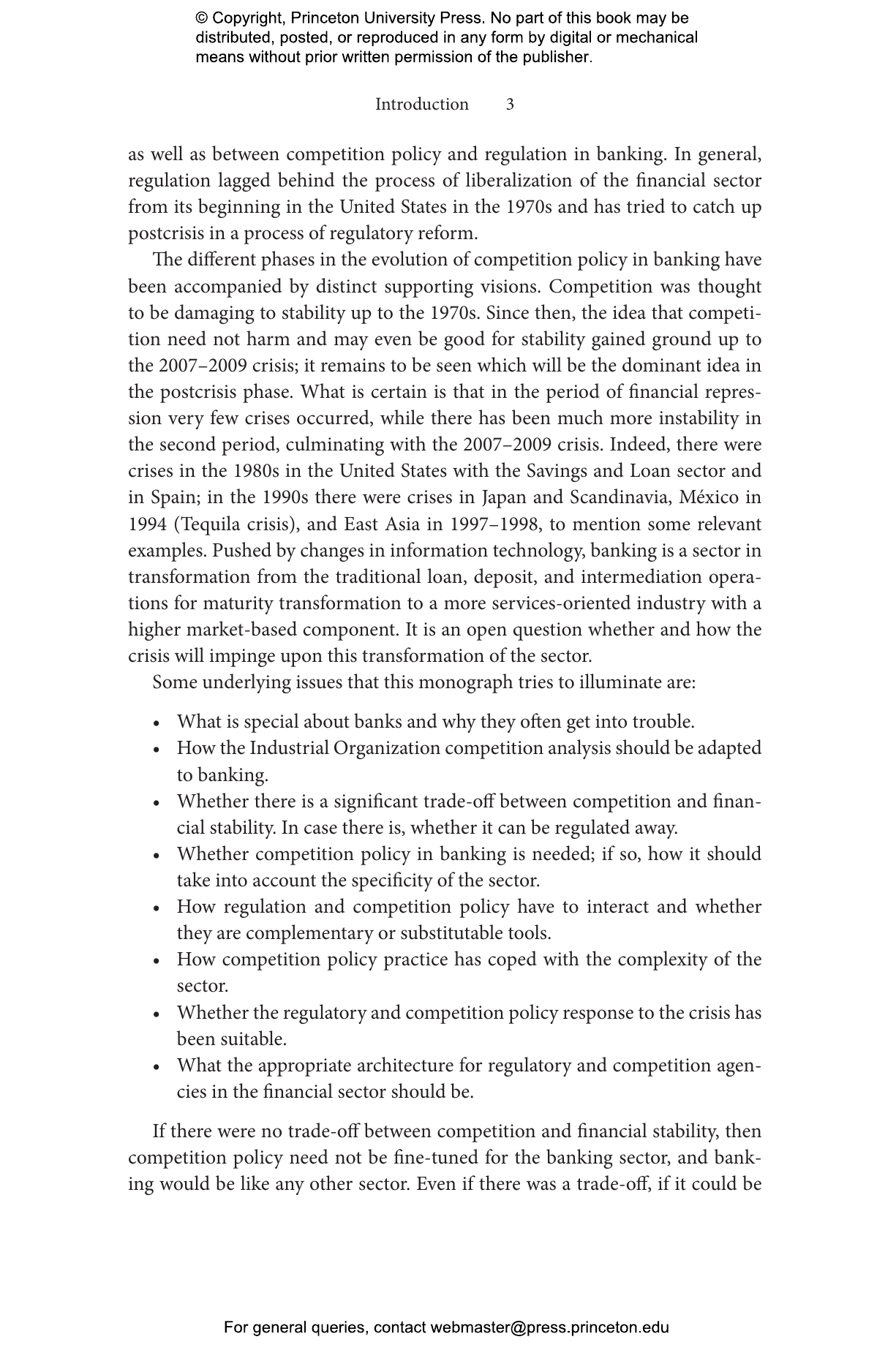 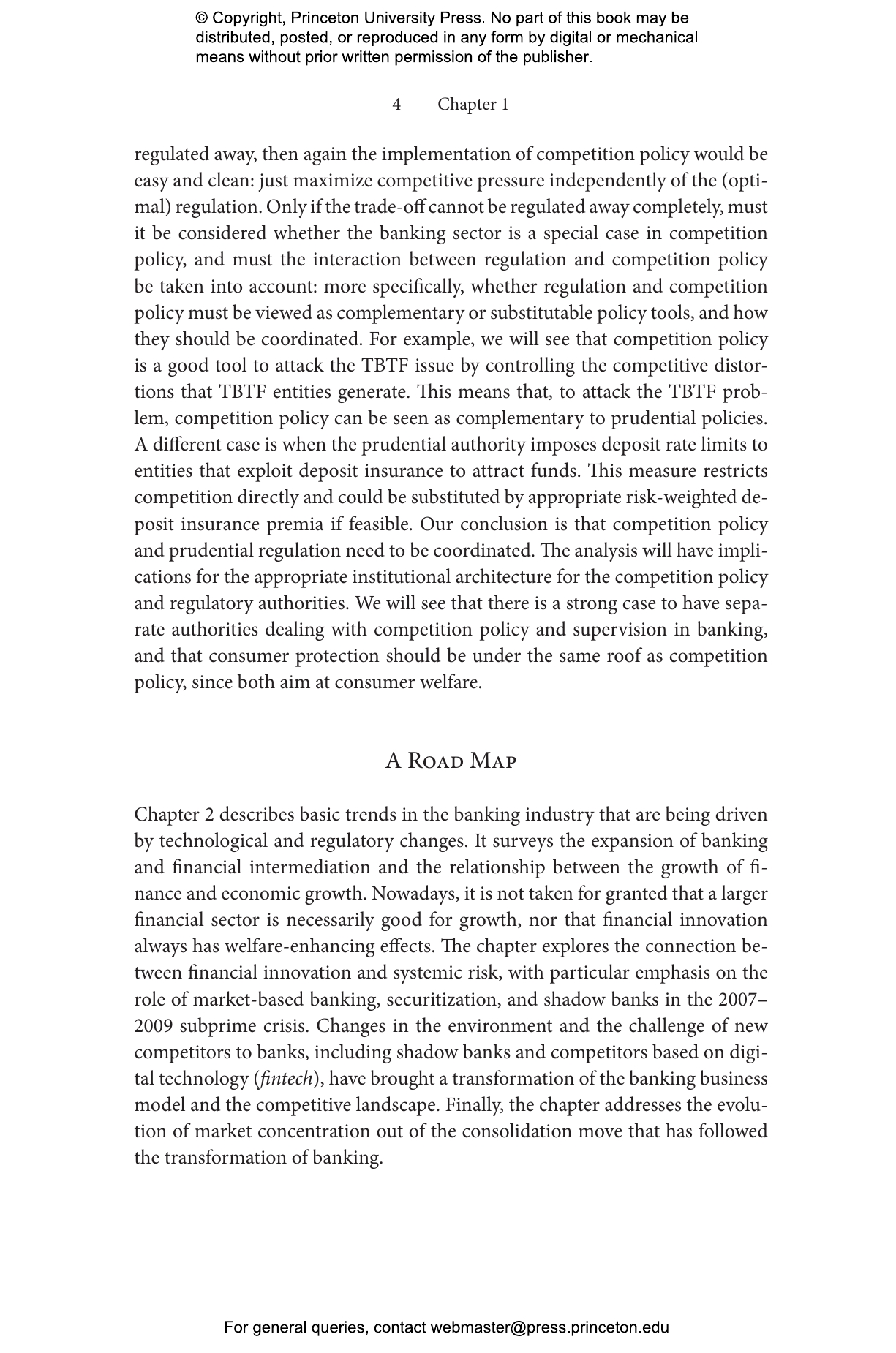 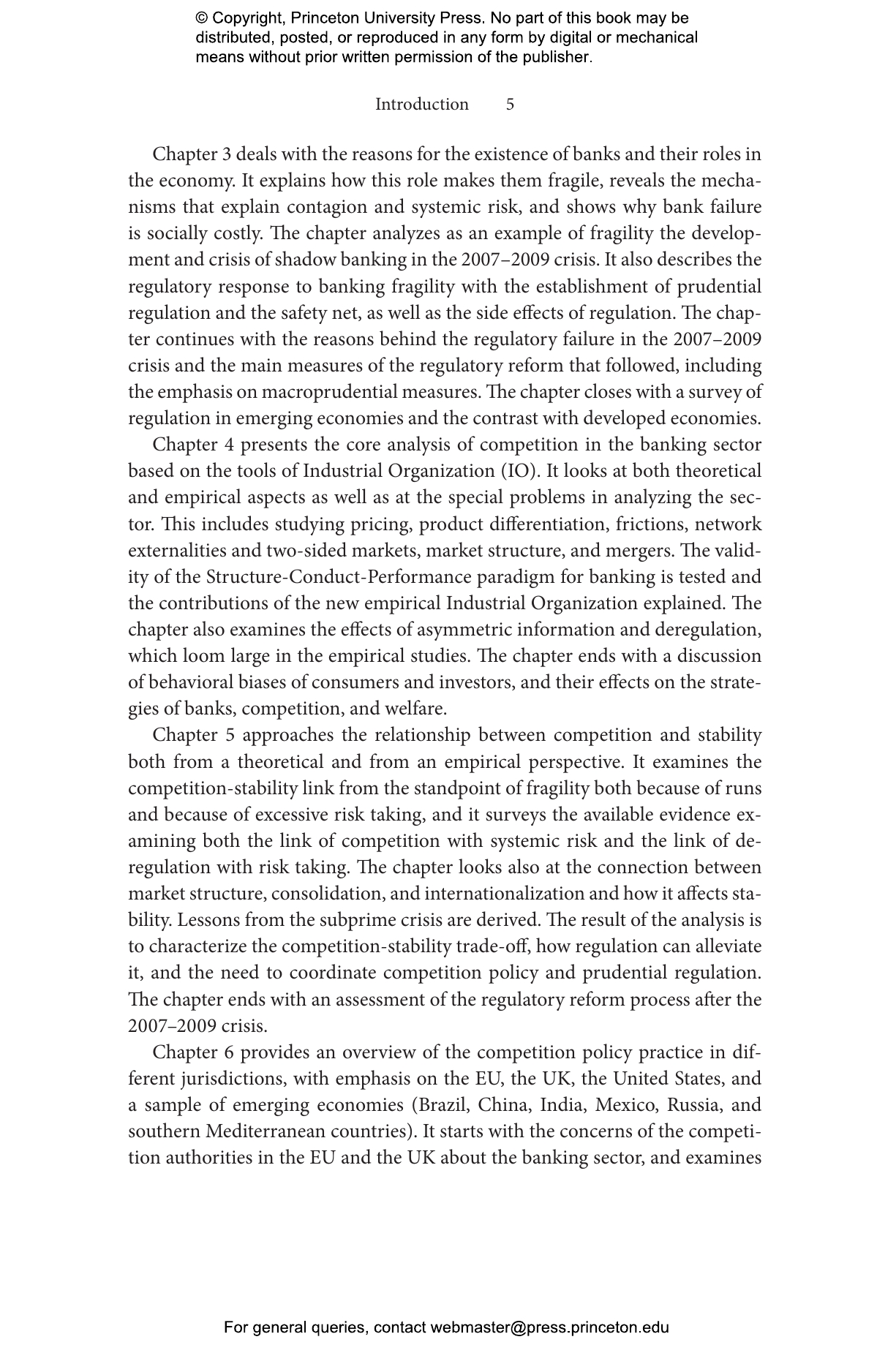 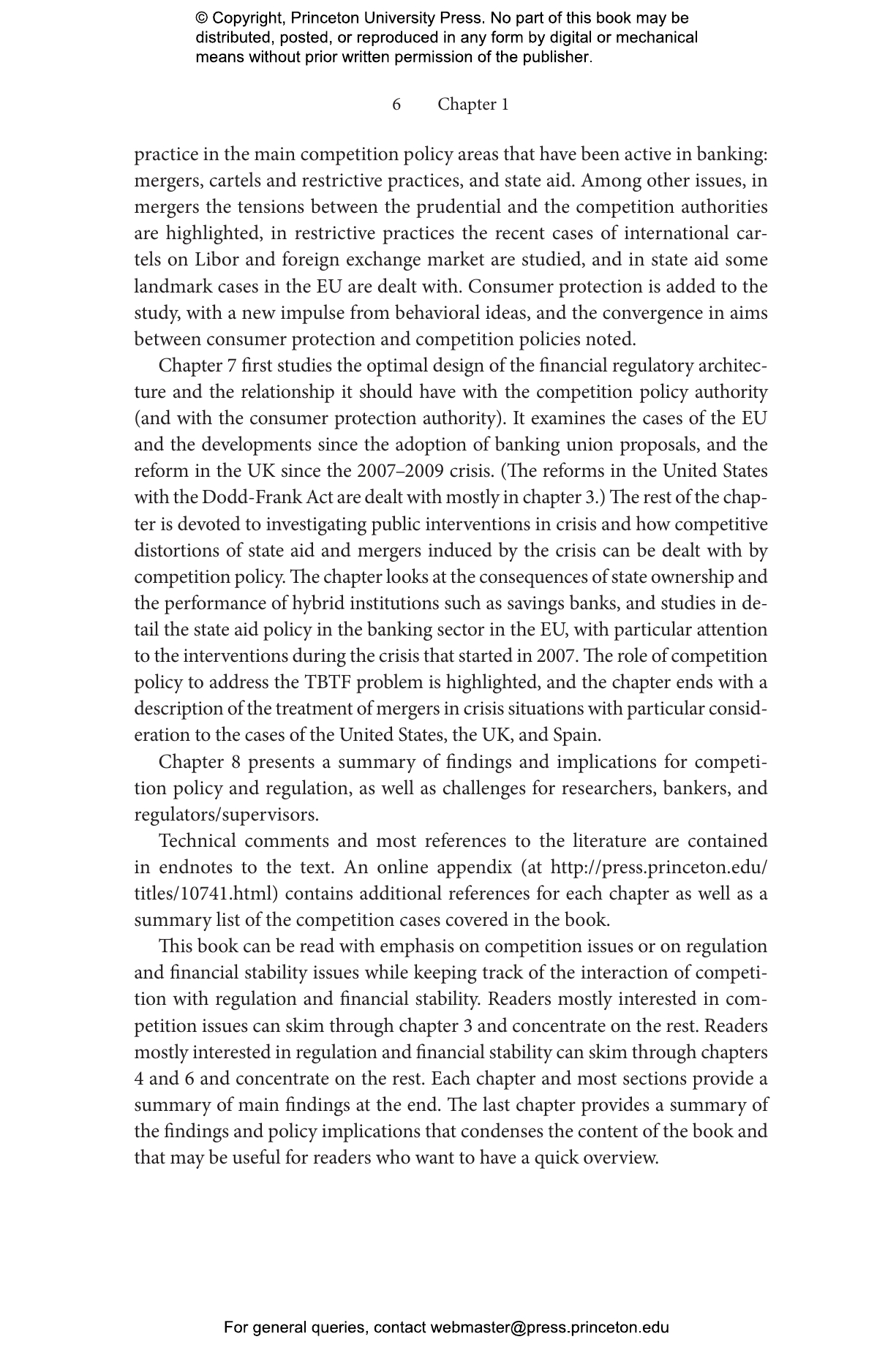 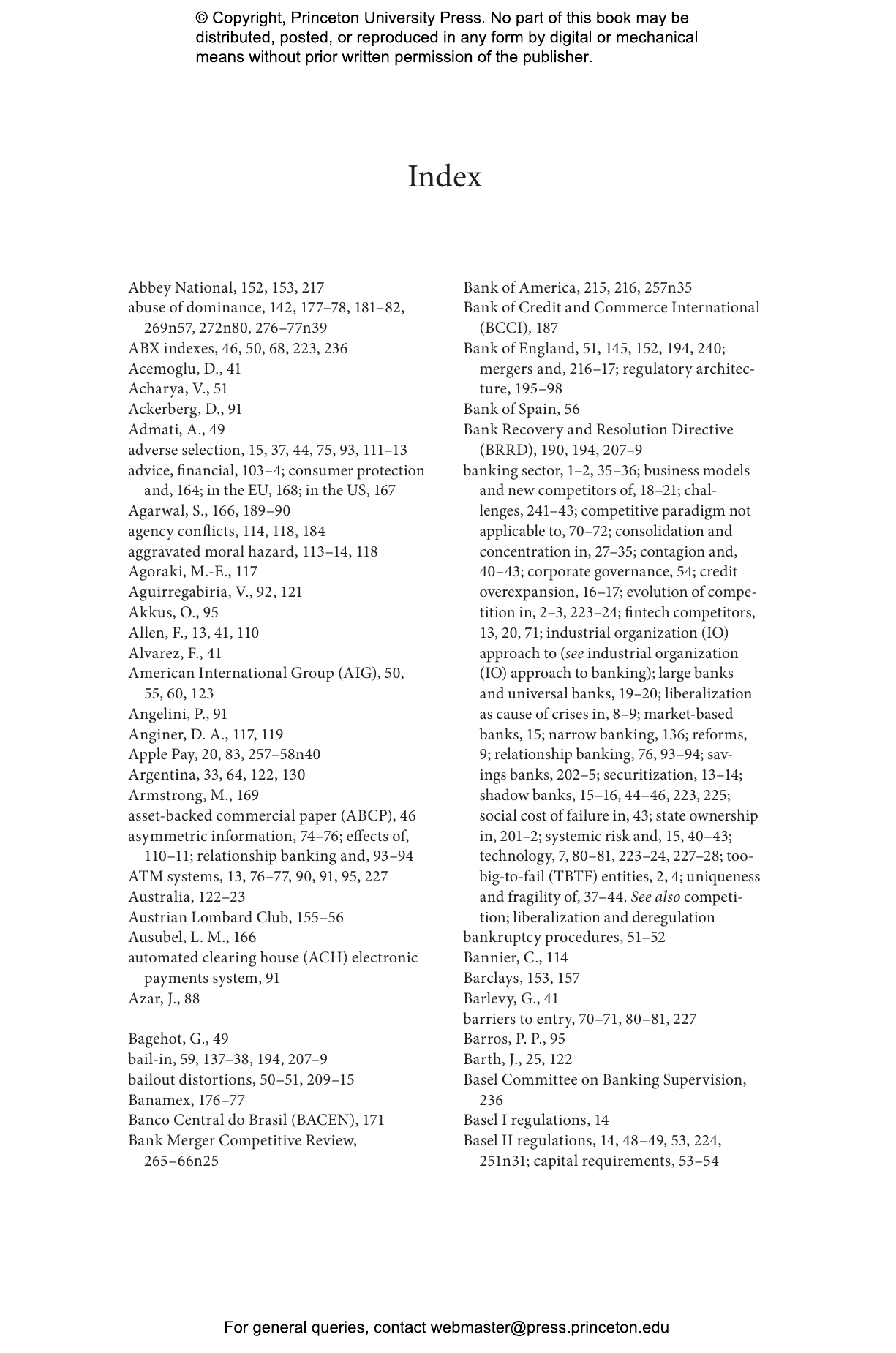 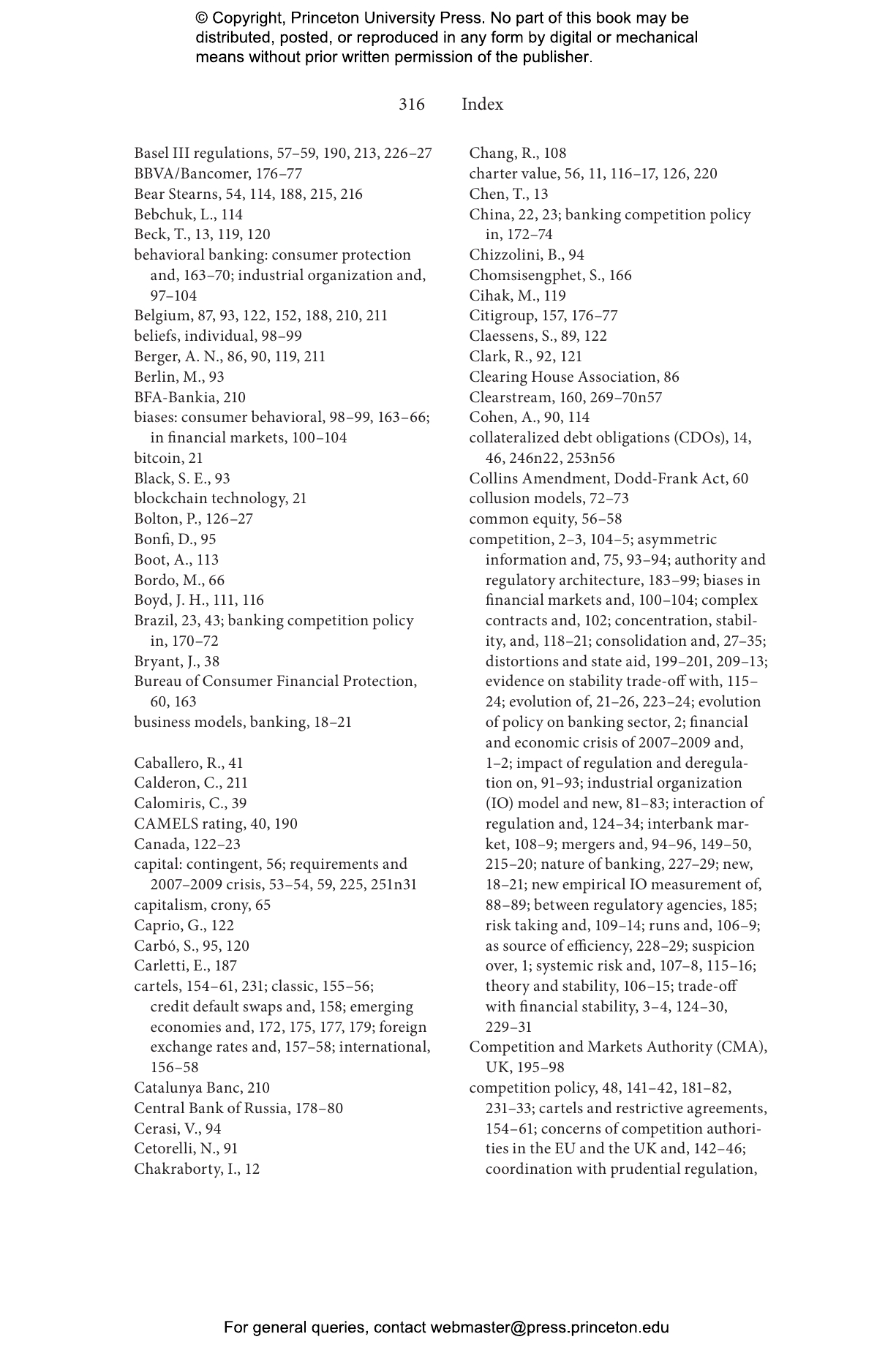 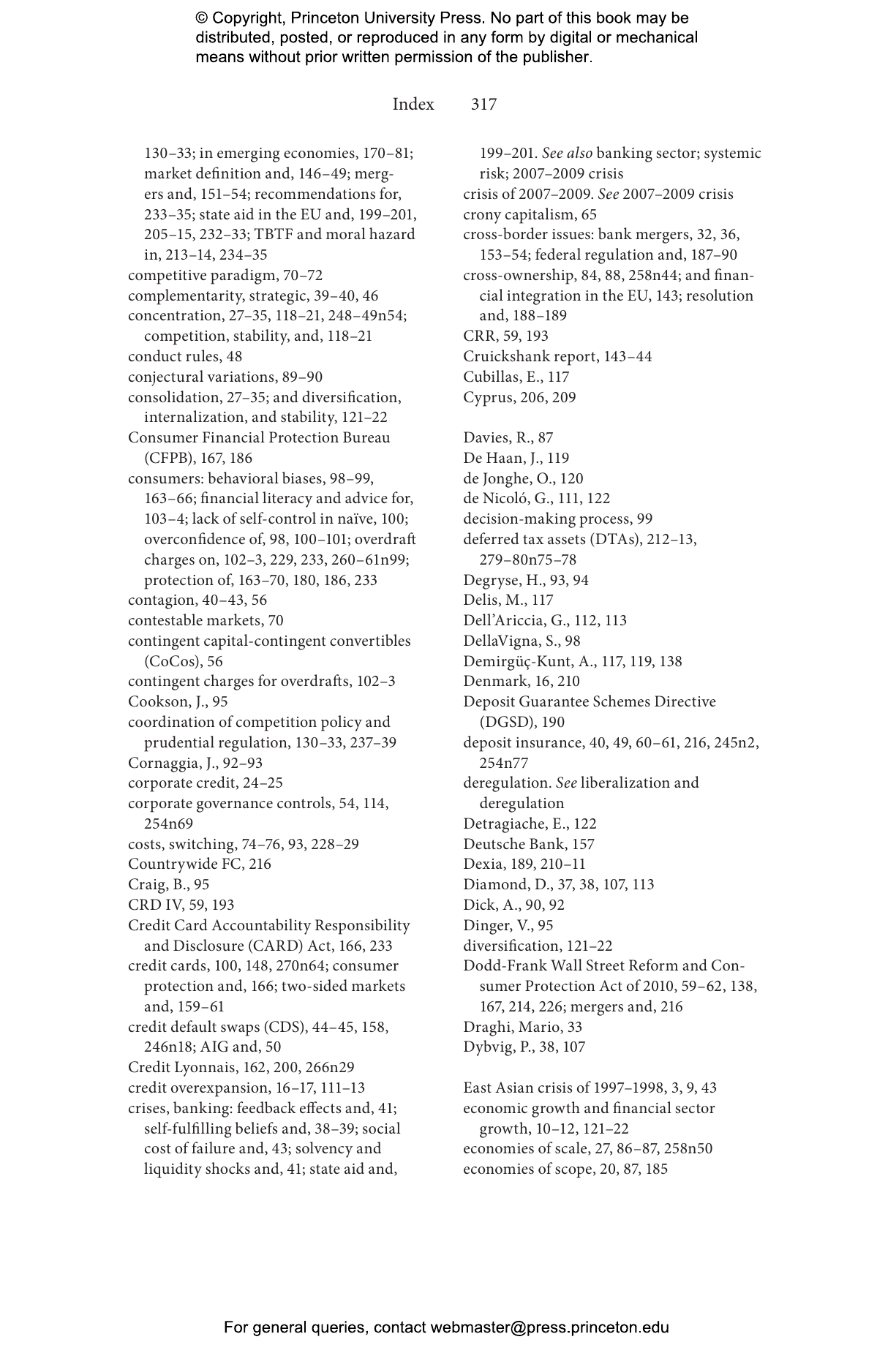 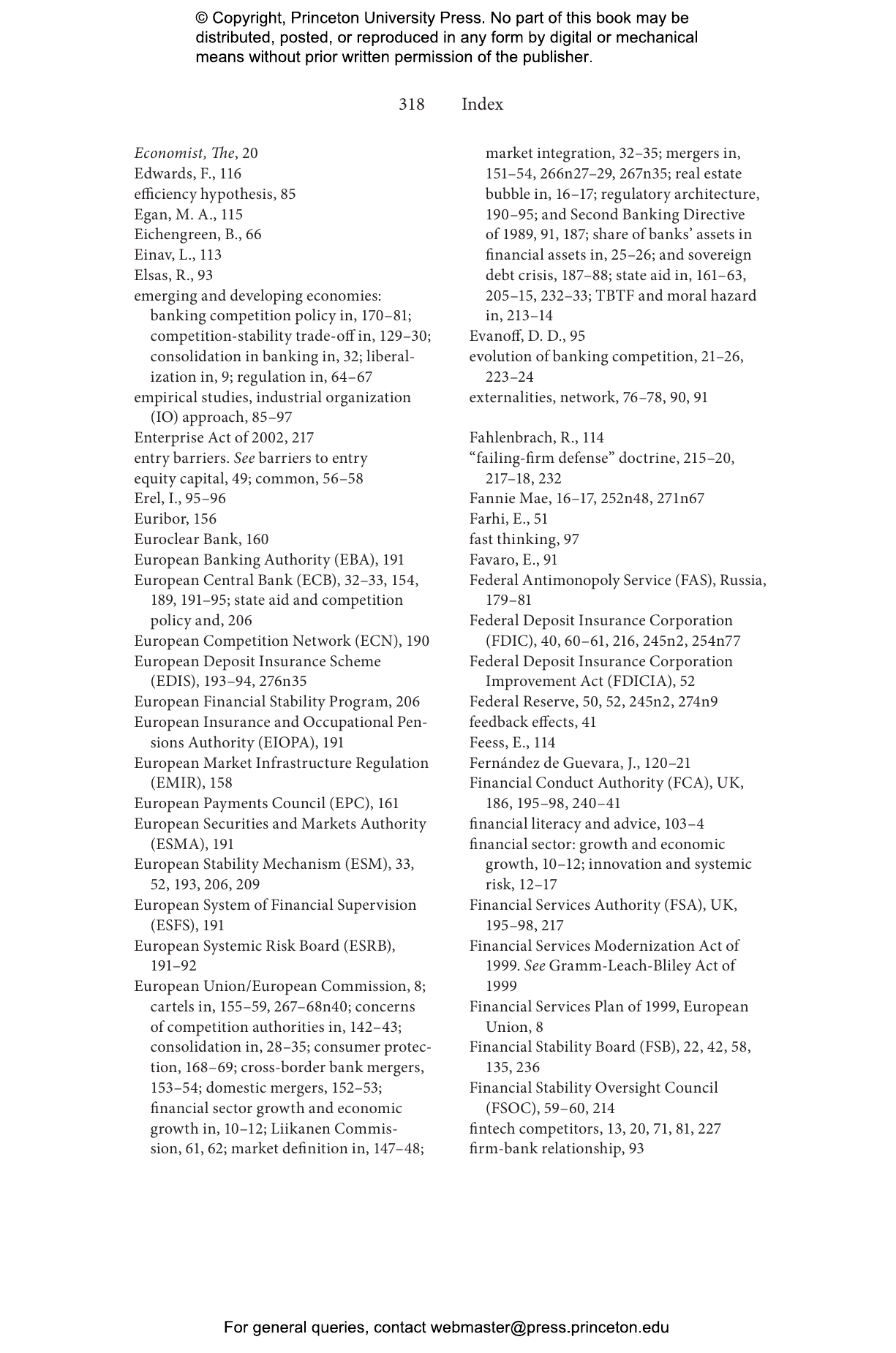 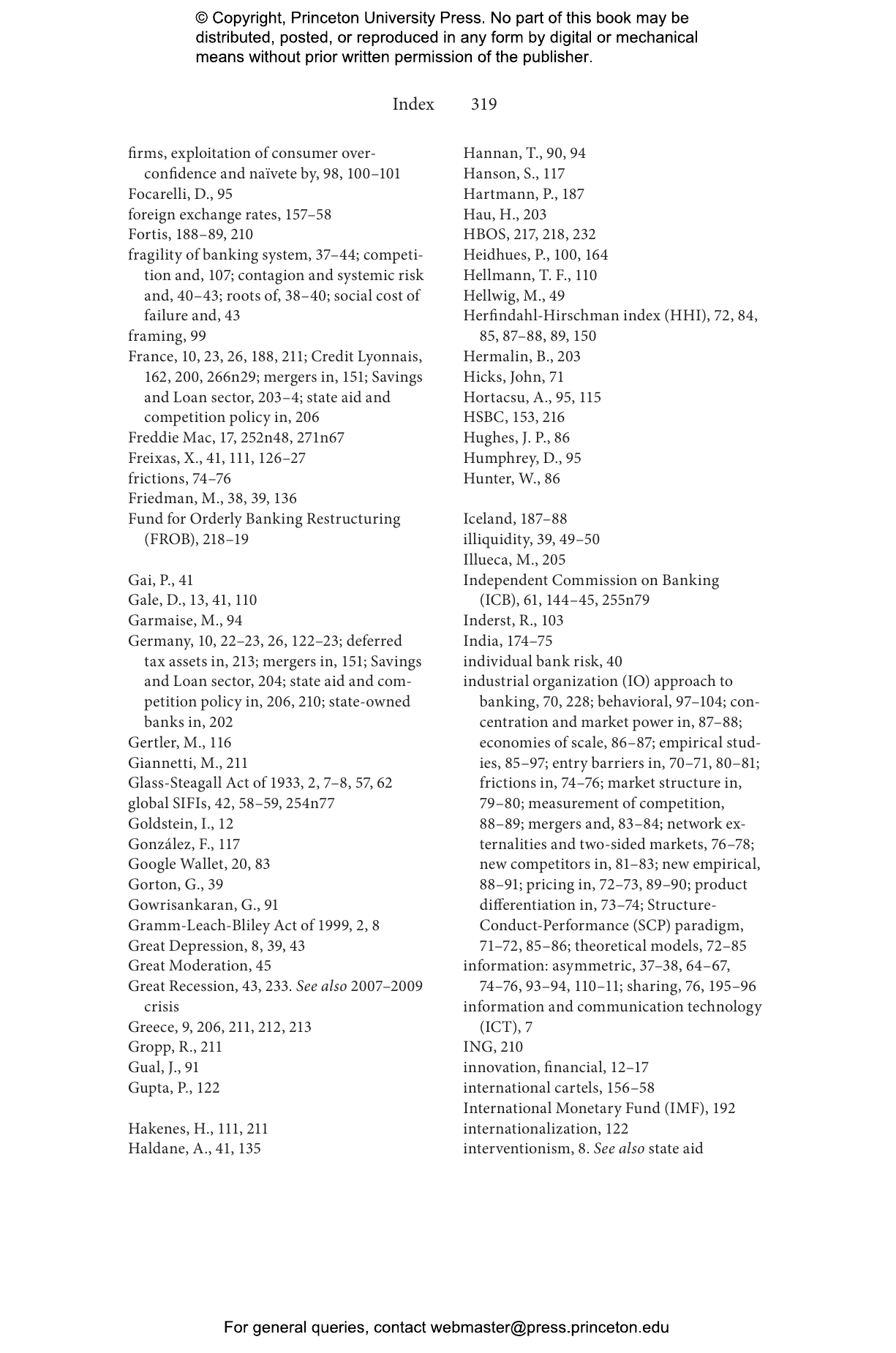 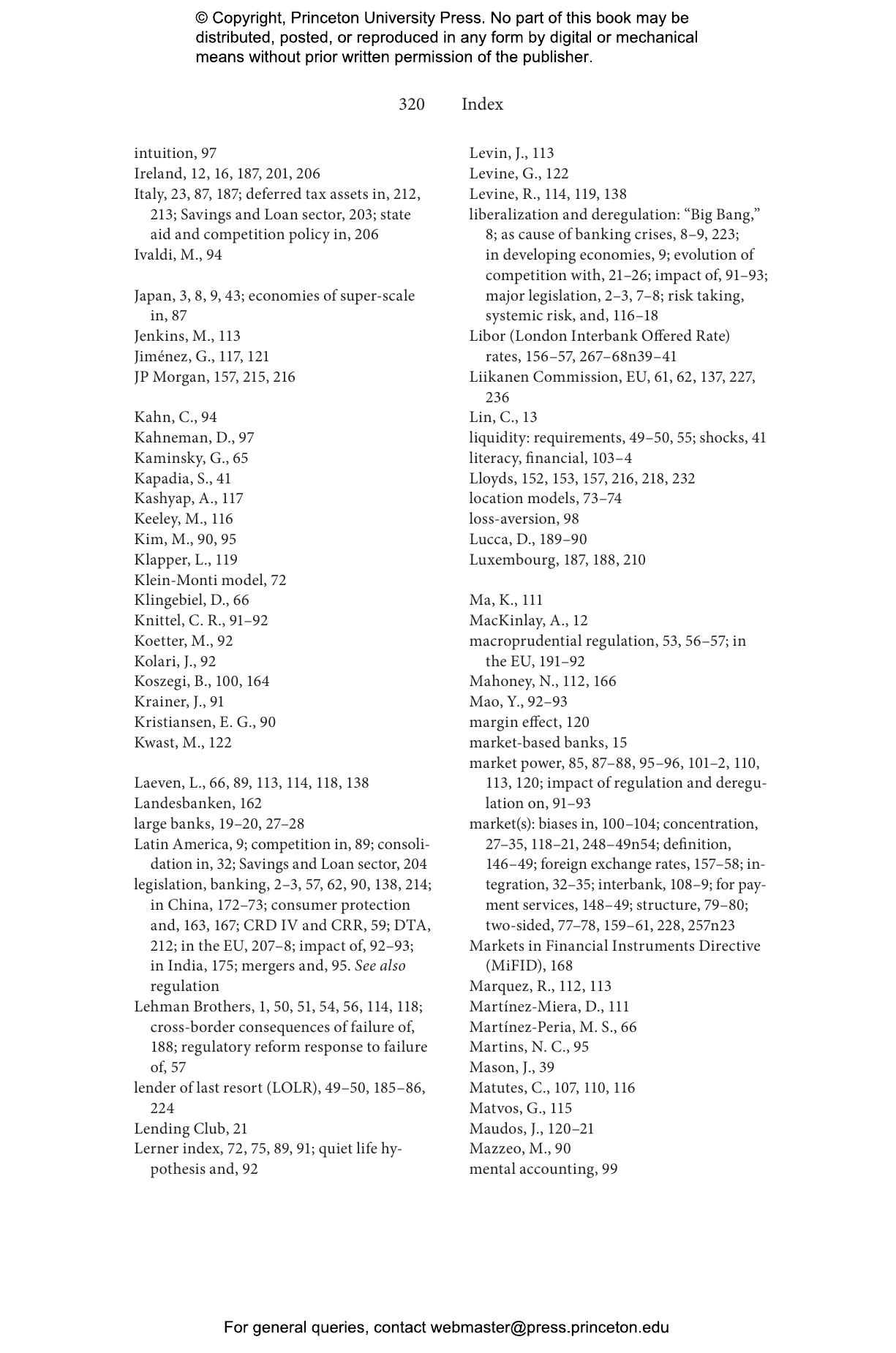 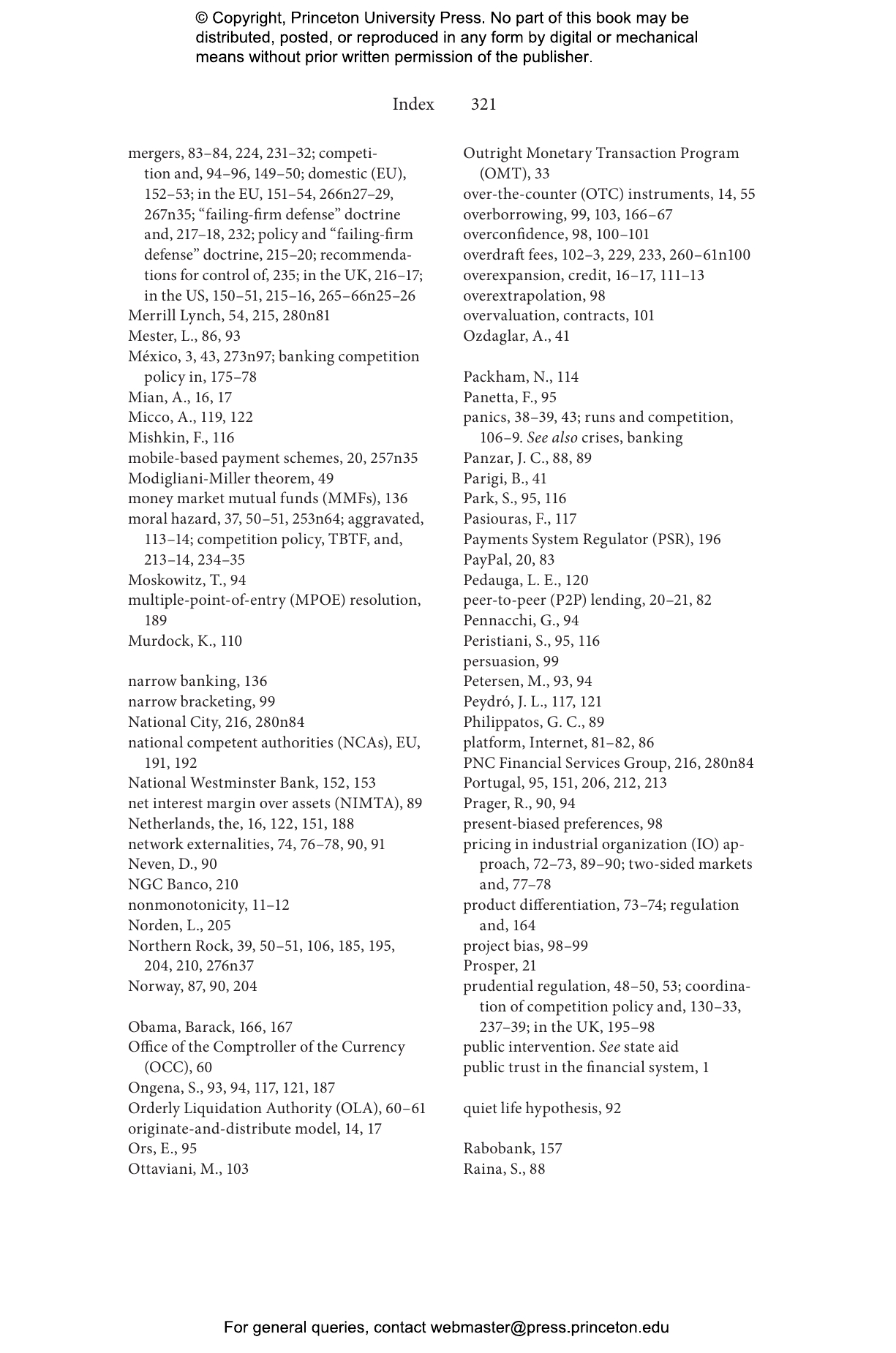 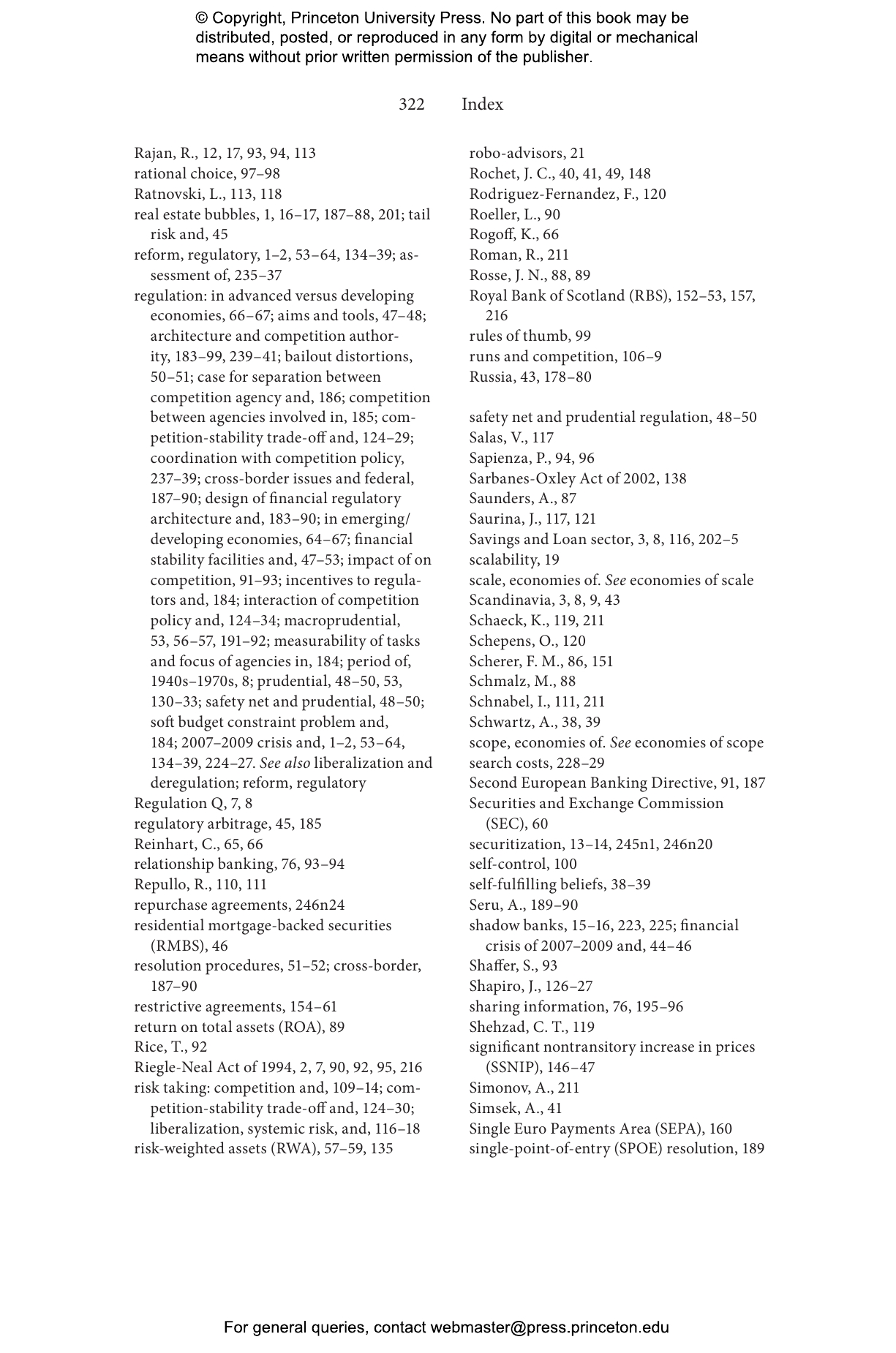 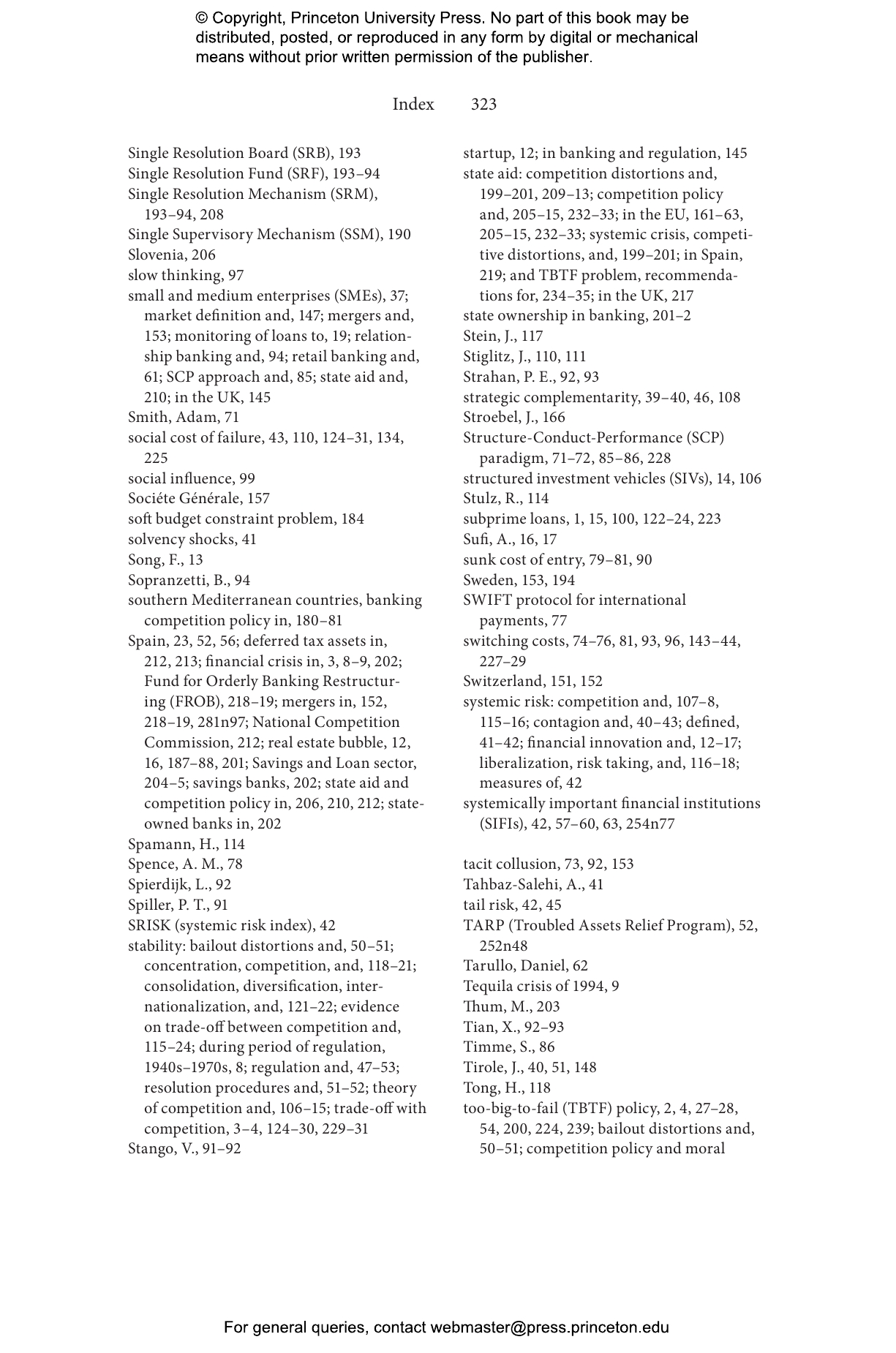 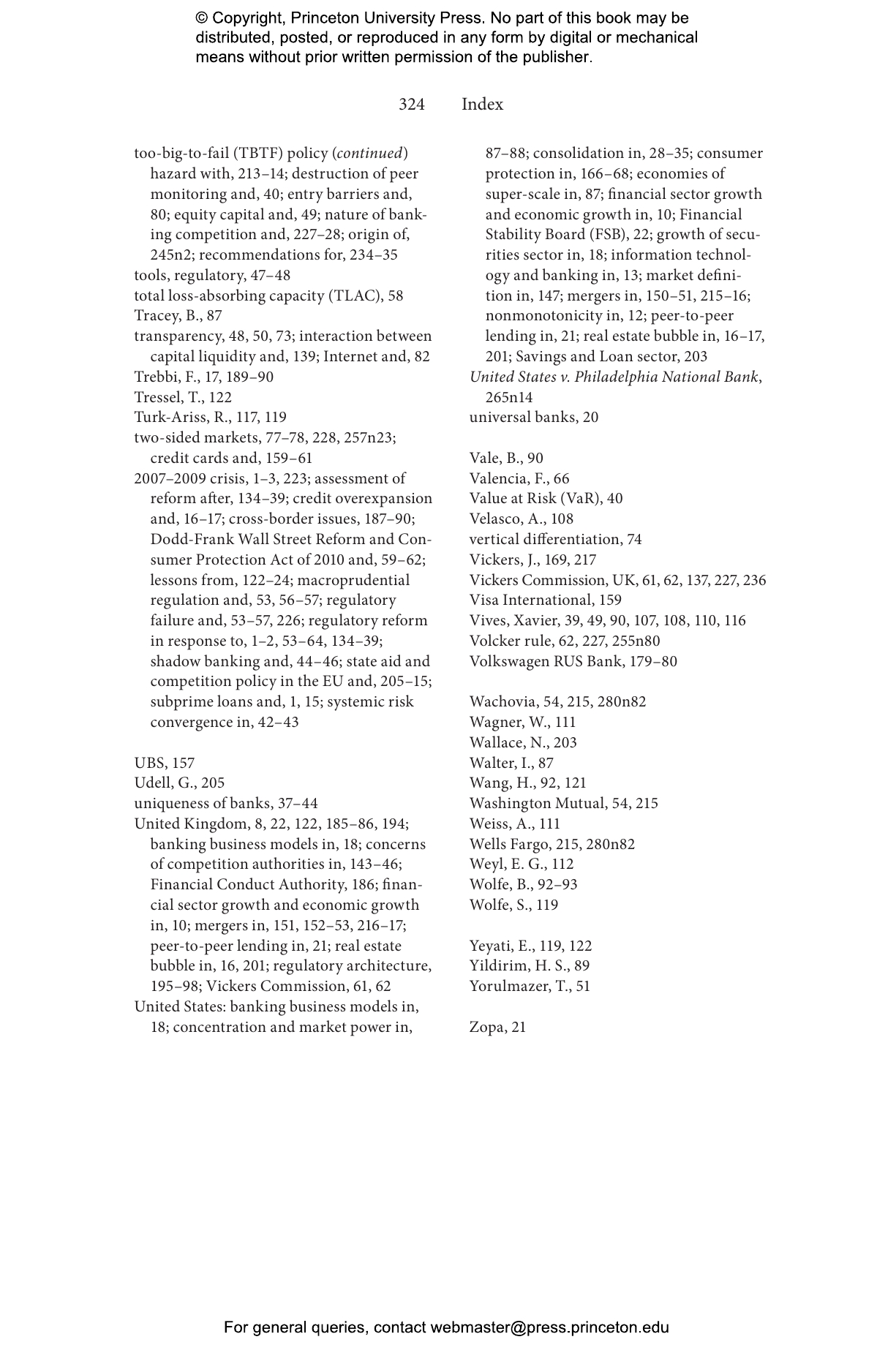 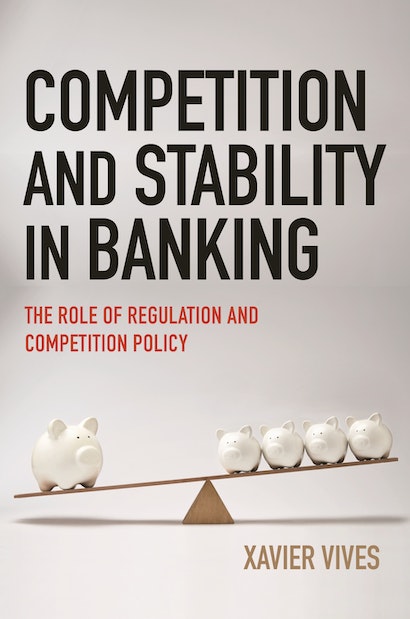 Does too much competition in banking hurt society? What policies can best protect and stabilize banking without stifling it? Institutional responses to such questions have evolved over time, from interventionist regulatory control after the Great Depression to the liberalization policies that started in the United States in the 1970s. The global financial crisis of 2007–2009, which originated from an oversupply of credit, once again raised questions about excessive banking competition and what should be done about it. Competition and Stability in Banking addresses the critical relationships between competition, regulation, and stability, and the implications of coordinating banking regulations with competition policies.

Xavier Vives argues that while competition is not responsible for fragility in banking, there are trade-offs between competition and stability. Well-designed regulations would alleviate these trade-offs but not eliminate them, and the specificity of competition in banking should be accounted for. Vives argues that regulation and competition policy should be coordinated, with tighter prudential requirements in more competitive situations, but he also shows that supervisory and competition authorities should stand separate from each other, each pursuing its own objective. Vives reviews the theory and empirics of banking competition, drawing on up-to-date analysis that incorporates the characteristics of modern market-based banking, and he looks at regulation, competition policies, and crisis interventions in Europe and the United States, as well as in emerging economies.

Focusing on why banking competition policies are necessary, Competition and Stability in Banking examines regulation’s impact on the industry’s efficiency and effectiveness.

Xavier Vives is professor of economics and finance at the IESE Business School in Barcelona. His books include Information and Learning in Markets (Princeton) and Oligopoly Pricing. 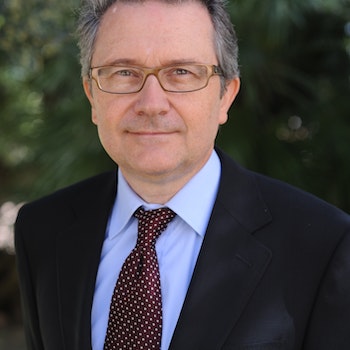 "The book is worth reading from cover to cover. It is thoughtful, well written, lucidly surveys some well-known material, and brings useful insights using some of the tools of industrial organisation economics."—Geoffrey Wood, Central Banking Journal

"Competition and Stability in Banking can be said to represent the best of available knowledge. . . . An impressive work of one of the leading economists in the field. It is first of all a (rather: the) new textbook on a Master or PhD level. Yet, it should also be mandatory reading to all economists (and lawyers) working in official or government agencies related to either banking regulation and supervision or competition."—Urs Birchler, Journal of Economics and Statistics

"Can the banking industry be both stable and openly competitive? Can we have it all? This is the fundamental question addressed in Competition and Stability in Banking. Xavier Vives is uniquely placed to write this hugely interesting and original book, as his research during the past twenty years has spanned banking theory, industrial organization, and competition policy. No other economist has covered this ground so thoroughly. As it turns out, competition issues—whether between regulated banks, or shadow banking and the regulated sector—are at the center of banking crises and bank prudential regulation. Vives provides a uniquely lucid and stripped-down discussion of the theory, empirical research, institutional backgrounds, and policy responses across countries. Anyone looking for a comprehensive and authoritative layman's treatment of these complexly interwoven issues should read this book."-Patrick Bolton, Columbia University

"The banking sector is at the core of our present economic troubles. Xavier Vives provides a rigorous overview of the intense regulatory activity put forward to address the problems encountered since the outbreak of the financial crisis, and also discusses the role of competition policy as the complementary instrument for improving the efficient functioning of the market. Vives's contribution is an essential tool for understanding what happened in our economies since 2007."—Joaquín Almunia, former vice president and commissioner for competition, European Commission

"Now that the global financial crisis has subsided, governments and regulators must deal with the issue of what to do about banking competition in the long term. Xavier Vives is one of the most distinguished and knowledgeable economists in the world, and his excellent and timely book analyzes the interactions between banking regulation and competition policy. It will be useful to experts in the field and of interest to general readers."—Franklin Allen, Imperial College London and University of Pennsylvania

"Bringing together material in an easily understood framework, this lucid and well-written book looks at competition and competition policy in banking. It serves as a good reference for academics and it will help policymakers understand better trade-offs and policy choices. A major accomplishment."—Stijn Claessens, senior advisor, Board of Governors of the Federal Reserve System