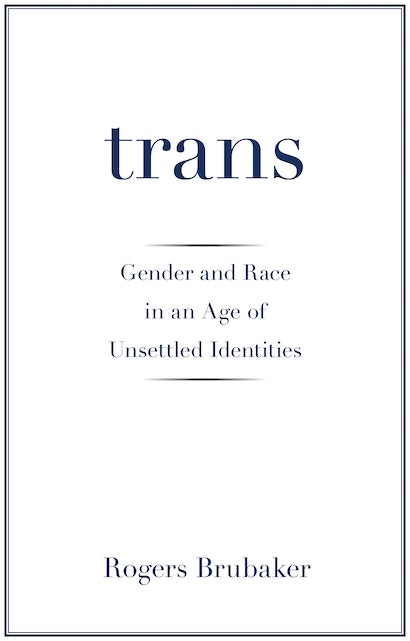 Taking the controversial pairing of “transgender” and “transracial” as his starting point, Rogers Brubaker shows how gender and race, long understood as stable, inborn, and unambiguous, have in the past few decades opened up—in different ways and to different degrees—to the forces of change and choice. Transgender identities have moved from the margins to the mainstream with dizzying speed, and ethnoracial boundaries have blurred. Paradoxically, while sex has a much deeper biological basis than race, choosing or changing one’s sex or gender is more widely accepted than choosing or changing one’s race. Yet while few accepted Dolezal’s claim to be black, racial identities are becoming more fluid as ancestry—increasingly understood as mixed—loses its authority over identity, and as race and ethnicity, like gender, come to be understood as something we do, not just something we have. By rethinking race and ethnicity through the multifaceted lens of the transgender experience—encompassing not just a movement from one category to another but positions between and beyond existing categories—Brubaker underscores the malleability, contingency, and arbitrariness of racial categories.

At a critical time when gender and race are being reimagined and reconstructed, Trans explores fruitful new paths for thinking about identity.

Rogers Brubaker is professor of sociology and UCLA Foundation Chair at the University of California, Los Angeles.

"The value in [Trans] is not in readjudicating old internet battles, but in laying out current conflicts of identity in a public, accessible way."—Emma Green, The Atlantic

"Lucid, sophisticated, and judicious,Transis an important and timely exploration of the increasingly uncertain and unsettled boundaries of identity."—Glenn Altschuler, Florida Courier

"Brubaker maintains that we are living in ‘an age of unsettled identities.' Of that, he convinces me. This book is necessary reading for anyone interested in the categories of identity and how they are being invoked or subverted."—Leonard Curry, Christian Century

"[A] clear-eyed, eye-opening book to see ways in which transracialism may and may not be considered as legitimate as transgenderism in the modern push for fluidity of identity categories."—A. Loudermilk, PopMatters

"“Brubaker . . . one of our finest analysts of the politics of difference, provides a clear and concise guide for the perplexed. He carefully lays out a taxonomy of both older and emerging classifications of ‘trans,' ordering both the many meanings of transgender and the less well known and more contested ideas about transracial. . . . What is clear from this excellent book is that the cultural logic of autonomy/choice that is working itself out in our age of unsettled identities is not of itself self-limiting. Wherever it takes us as a society, it seems, we will be forced to go.""—Joseph E. Davis, Society

"Important reading for any psychologist interested in how people construe and label their own and others' identities, especially those having to do with gender and race."—Marianne LaFrance, PsycCritiques

"A rousing intellectual incitement and a splendid piece to think with."—Joss Greene, British Journal of Sociology

"Brubaker’s volume is a challenging, refreshing and daring lecture for people invested in the debates on social justice, and acts as a good entry point for those who are not but who still have plenty of questions."—Eszter Kováts, Identities

"Smart and timely, Trans examines the conjoining of 'transgender' and 'transracial' categories in the popular and scholarly discussions about Caitlyn Jenner and Rachel Dolezal during the summer of 2015. A lucid, wide-ranging exploration of tensions between givenness and chosenness in contemporary identity discourse, this is a must-read for anybody interested in the questions 'Who am I?' and 'Who are you?'"—Susan Stryker, author of Transgender History

"At a time when American culture is transfixed by ‘trans,' Rogers Brubaker urges us to think with trans—to use the space that transgender reveals between culture and biology to understand how we experience race and ethnicity. Brubaker's thoughtful, humane, and conceptually elegant book provides a feast of insights about the varieties of identity that Americans today can experience and the ways that old categories continue to function in an unsettled world."—Daniel J. Sharfstein, author of The Invisible Line: A Secret History of Race in America

"This wonderful book exemplifies sociological analysis at its very best, deploying sharp distinctions that elucidate the complexities of the current unsettling of identities regarding sex and gender, and race and ethnicity. Discussing these together, each in light of the other, Trans brightly illuminates where and why they differ."—Steven Lukes, New York University

"Rogers Brubaker's exploration of changing conceptions of gender and race is deeply informed, intellectually rigorous, and profoundly insightful. I learned a great deal from his careful description of the politics surrounding those who choose racial and gender identities at odds with widespread expectations. I admire this accessible book and am grateful for it."—Randall Kennedy, author of For Discrimination: Race, Affirmative Action, and the Law

"Trans is an intellectual investigation giving clarity to an incompletely charted arena. Brubaker asks key questions, like why racial and ethnic categories seem to be thought as more biological and less legitimately variable than sex and gender. In a field dominated by accounts of experience, he offers an inquiry into systems of classification that is characteristically insightful."—Craig Calhoun, director of the London School of Economics and Political Science

"This provocative and perceptive book argues that the current 'trans moment' presents an unparalleled opportunity for exploring vernacular classification systems and political claims about identities. Transposing and generalizing to the arena of race and ethnicity insights developed by transgender and feminist analysts, Trans reveals the paradoxical deployment of social construction, contingency, and biology."—Ann Shola Orloff, Northwestern University

"Taking up Caitlyn Jenner's gender transition and Rachel Dolezal's status as a self-proclaimed black person, Brubaker sheds light on the paradoxes of choice and constraint that swirl around conceptions of identity at a time when our cultural understandings of gender and race are very much in flux. This is a timely, judicious, and tremendously thoughtful and learned investigation into present-day debates. Everyone will want to read this book."—Steven Epstein, author of Inclusion: The Politics of Difference in Medical Research

"Trans offers an exceptionally lucid, insightful account of the contemporary discussion on ‘trans' and an extremely useful investigation of the directions that ‘transgenderism' and ‘transracialism' might take. Offering original thinking about gender to prod us to consider race in new ways, this dauntingly good book will garner a great deal of attention."—Ann Morning, author of The Nature of Race

"Trans provides a strong, nuanced perspective on the rapidly shifting cultural imaginary of transgender identities and the emerging questions about possibilities for transracial identification. In its analysis of how popular thinking on race aligns and diverges from beliefs about gender, this timely book will engender much discussion and perhaps some controversy—but it will definitely be read."—Kristen Schilt, University of Chicago