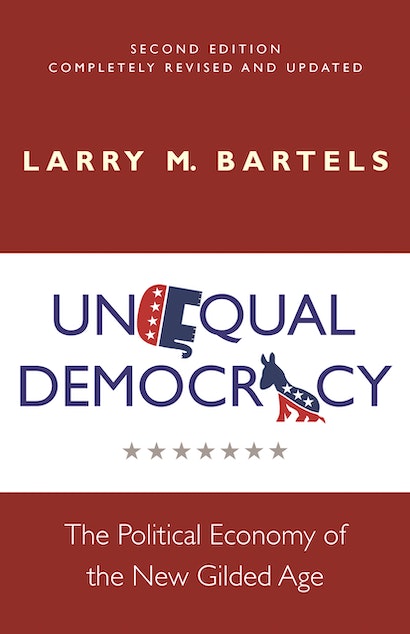 The first edition of Unequal Democracy was an instant classic, shattering illusions about American democracy and spurring scholarly and popular interest in the political causes and consequences of escalating economic inequality. This revised, updated, and expanded second edition includes two new chapters on the political economy of the Obama era. One presents the Great Recession as a “stress test” of the American political system by analyzing the 2008 election and the impact of Barack Obama’s “New New Deal” on the economic fortunes of the rich, middle class, and poor. The other assesses the politics of inequality in the wake of the Occupy Wall Street movement, the 2012 election, and the partisan gridlock of Obama’s second term. Larry Bartels offers a sobering account of the barriers to change posed by partisan ideologies and the political power of the wealthy. He also provides new analyses of tax policy, partisan differences in economic performance, the struggle to raise the minimum wage, and inequalities in congressional representation.

Larry M. Bartels holds the May Werthan Shayne Chair of Public Policy and Social Science at Vanderbilt University. His books include Democracy for Realists: Why Elections Do Not Produce Responsive Government (with Christopher H. Achen) and Presidential Primaries and the Dynamics of Public Choice (both Princeton). He is a trustee of the Russell Sage Foundation, a fellow of the American Academy of Political and Social Science, and a member of the American Academy of Arts and Sciences and the National Academy of Sciences.

"[I recommend] Larry M. Bartels’s Unequal Democracy. Especially at this time every thoughtful American needs to learn as much as possible about the relationship of politics to economics."—Bill Clinton, Daily Beast

"Bartels is the political scientist of the moment."—Michael Tomasky, New York Review of Books

"A short review cannot convey the rich variety of arguments and data Bartels deploys in making his case. . . . Bartels shows that social issues do not create as strong a headwind against class-based voting as is often assumed and that lower income voters do tend to vote Democratic while upper-income voters do tend to vote Republican. Unequal Democracy offers an important case for why this might be."—Robert Grafstein, Science

"Obama can connect with voters on the economy by using history as a guideline. He should start by reading Unequal Democracy, by Princeton academic Larry Bartels."—James Carville, CNN

"Unequal Democracy is a major landmark in political scientists’ efforts to grapple with inequality."—Benjamin I. Page, Perspectives on Politics

"[Bartels] is correct in drawing attention to the tension between the egalitarian values that Americans hold and their apparent toleration for growing economic inequality. And at every step of the argument, he defines and analyzes interesting and relevant evidence."—Richard R. John, Forum

"The book is exemplary throughout in its transparency with regard to the data and Bartels’s analytic strategy for using them, in its attention to alternative explanations for a given outcome, and in its balance between not over-reaching and asserting a clear, controversial, and important thesis. . . . Full of evidence, insights, and surprises. . . . The book is never less than provocative and is often revelatory."—Jennifer Hochschild, Perspectives on Politics

"For a book targeted at both academic and nonacademic audiences, Bartels strikes a nice balance between exhaustive empirical rigor and accessibility. . . . Bartels gives us a wide-ranging framework for thinking about the ways that citizens interact with the political system, and in so doing maps an agenda for the next generation of research on American democracy in action."—Nicholas J. G. Winter, Public Opinion Quarterly

“This book suggests that economists are wrong and that the growing inequality in America is not the product of world forces but of Republican administrations during which income grows more slowly, inequality soars, and no one notices because they pump up the economy during election years. If you care about economic justice, you need to seriously examine the powerful data in this book and recognize that we can choose a better, fairer society.”—Gary Orfield, University of California, Los Angeles

“This is a fantastic book, a real tour de force. It is a hugely important study of increasing economic inequality in America and the failure of the political system to mitigate its effects on poor citizens. It is the best work that has been done on the political economy of income inequality.”—Thomas Mann, Brookings Institution

“Unequal Democracy is the sort of book to which every political scientist should aspire—it is methodologically rigorous, conceptually serious, and above all, it addresses urgent concerns of our fellow citizens. As Bartels shows, much of what we think we know about the politics of economic inequality is dead wrong. Bartels’s perplexing and often unexpected discoveries should help refocus the gathering public debate about inequality and what to do about it.”—Robert D. Putnam, author of Bowling Alone

“Unequal Democracy completes the story of why America’s wealthy have become superrich. As Larry Bartels, one of the nation’s top political scientists, convincingly demonstrates, the rich get richer when the Republicans are in power and when the less affluent fail to vote. This book is essential reading for anyone who wants answers to why so many of America’s working- and middle-class families are struggling to get by.”—Thomas E. Patterson, Harvard University

“No political scientist is more widely or rightly respected than Larry Bartels, and Unequal Democracy is a brilliant book that only he could have written. The book proves beyond a reasonable doubt that the main fault for sizable socioeconomic inequalities in America lies not in our economy but in our increasingly polarized and partisan politics. With intellectual force, Unequal Democracy pulls back the sheets on Washington’s pamper-the-rich policy process and offers ideas about how we can do better by average citizens and the poor. It is Bartels at his very best, and his very best is the best there is.”—John J. DiIulio, Jr., University of Pennsylvania, former director of the White House Office of Faith-Based and Community Initiatives