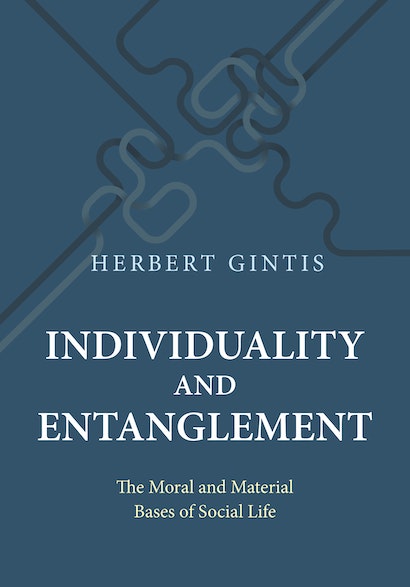 In this book, acclaimed economist Herbert Gintis ranges widely across many fields—including economics, psychology, anthropology, sociology, moral philosophy, and biology—to provide a rigorous transdisciplinary explanation of some fundamental characteristics of human societies and social behavior. Because such behavior can be understood only through transdisciplinary research, Gintis argues, Individuality and Entanglement advances the effort to unify the behavioral sciences by developing a shared analytical framework—one that bridges research on gene-culture coevolution, the rational-actor model, game theory, and complexity theory. At the same time, the book persuasively demonstrates the rich possibilities of such transdisciplinary work.

Everything distinctive about human social life, Gintis argues, flows from the fact that we construct and then play social games. Indeed, society itself is a game with rules, and politics is the arena in which we affirm and change these rules. Individuality is central to our species because the rules do not change through inexorable macrosocial forces. Rather, individuals band together to change the rules. Our minds are also socially entangled, producing behavior that is socially rational, although it violates the standard rules of individually rational choice. Finally, a moral sense is essential for playing games with socially constructed rules. People generally play by the rules, are ashamed when they break the rules, and are offended when others break the rules, even in societies that lack laws, government, and jails.

Throughout the book, Gintis shows that it is only by bringing together the behavioral sciences that such basic aspects of human behavior can be understood.

Herbert Gintis is an external professor at the Santa Fe Institute. He is the author, coauthor, or coeditor of a number of books, including Game Theory Evolving, The Bounds of Reason, Unequal Chances, A Cooperative Species, and Game Theory in Action (all Princeton).

"Herbert Gintis is our deepest thinker about the scandalous state of fragmentation of the human sciences. In this book, he distills a synthetic foundation for the sciences of human behavior from the mutually necessary but fatally flawed models offered by psychology, sociology, biology, and economics. Everyone who cares about these sciences needs to come to terms with his analysis."—Peter J. Richerson, coauthor of Not by Genes Alone: How Culture Transformed Human Evolution

"In Individuality and Entanglement, Herbert Gintis develops an original and distinctive theory of human sociality, drawing on ideas from economics, sociology, and evolutionary biology. The book combines breadth of focus with analytical penetration, and is written in an engaging, accessible style. Highly recommended."—Samir Okasha, University of Bristol

"Herbert Gintis is a scholar with sufficient depth in philosophy and science to develop a balanced treatment of one of the most important remaining problems in evolutionary biology: the units and forces of natural selection that yield advanced social behavior. He has done so admirably in Individuality and Entanglement."—Edward O. Wilson, Research Professor Emeritus, Harvard University

"Herbert Gintis's new book is a major contribution to the study and unity of the social sciences. Its breadth and depth in examining the meaning and unifying power of the rational-actor model is outstanding in perceiving the fundamental issues—biological, sociological, and economic—involved in understanding the special role of human social behavior. It forces economists to analyze what rationality means and, in particular, the role of social and other-regarding forces in the development of the economy. The command of social science literature displayed is matched by the power of the formal analysis."—Kenneth J. Arrow, Nobel Laureate in Economics