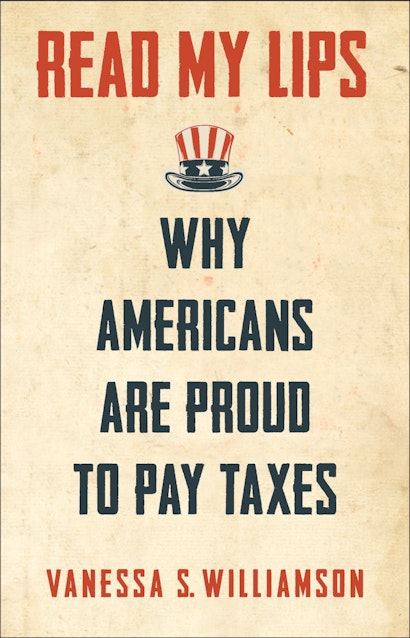 Conventional wisdom holds that Americans hate taxes. But the conventional wisdom is wrong. Bringing together national survey data with in-depth interviews, Read My Lips presents a surprising picture of tax attitudes in the United States. Vanessa Williamson demonstrates that Americans view taxpaying as a civic responsibility and a moral obligation. But they worry that others are shirking their duties, in part because the experience of taxpaying misleads Americans about who pays taxes and how much. Perceived “loopholes” convince many income tax filers that a flat tax might actually raise taxes on the rich, and the relative invisibility of the sales and payroll taxes encourages many to underestimate the sizable tax contributions made by poor and working people.

Americans see being a taxpayer as a role worthy of pride and respect, a sign that one is a contributing member of the community and the nation. For this reason, the belief that many Americans are not paying their share is deeply corrosive to the social fabric. The widespread misperception that immigrants, the poor, and working-class families pay little or no taxes substantially reduces public support for progressive spending programs and undercuts the political standing of low-income people. At the same time, the belief that the wealthy pay less than their share diminishes confidence that the political process represents most people.

Upending the idea of Americans as knee-jerk opponents of taxes, Read My Lips examines American taxpaying as an act of political faith. Ironically, the depth of the American civic commitment to taxpaying makes the failures of the tax system, perceived and real, especially potent frustrations.

Vanessa S. Williamson is a fellow in governance studies at the Brookings Institution. She is the coauthor of The Tea Party and the Remaking of Republican Conservatism.

"Excellent. . . . Williamson's most important contribution is her insistence that taxes are crucial in defining notions of what it means to be a real, deserving, and politically engaged American citizen."—Joseph Thorndike, Tax Notes

"A Tea Party expert draws on fascinating interviews with 49 Americans—white, black, Asian and Hispanic, urban and rural, Republican and Democrat—on their views on taxation, from form-filling to government waste to loopholes, and neatly upends the view of US citizens as reluctant taxpayers."—Karen Shook, Times Higher Education

"Read My Lips is a useful corrective to the dire view of Americans as irrational and ill-informed antitax zealots. It also offers Democrats a useful insight: Maybe Republicans' perceived edge on taxation owes less to the popularity of their views than to Democrats’ own failure to marshal a civic commitment to taxes for liberal ends. Having identified the problem, Williamson may be pointing the way to a solution to the ugly politics of taxation."—Josh Mound, Chronicle of Higher Education

"One of the smartest books I've read in recent years is Vanessa Williamson’s Read My Lips: Why Americans are Proud to Pay Taxes. In it, she busts the myth that Americans are knee jerk anti-taxation, but rather finds that like people in most other countries, we have a problem with taxes only when we feel that somebody isn’t paying their fair share."—Rana Faroohar and Edward Luce, Financial Times

"The idea that the bulk of Americans hate to pay taxes has become a pervasive idea across the country and among lawmakers. Vanessa Williamson’s book debunks this myth and shows with in-depth research that most Americans see paying taxes a mark of good citizenship and that any resistance to taxation has more to do with the perception of unfairness in the system. Read My Lips is an insightful dive into how Americans truly relate to their tax system and a must read for understanding the tax debate."—Aidan Davis, Just Taxes Blog

"An inspired, engaging, and thought-provoking contribution to social policy, economic sociology, and our understanding of the relationship between the state and society."—Cristobal Young, Contemporary Society

"This is a mind-blowing book. Thoughtfully relying on surveys and interviews, Vanessa Williamson shows that Americans look favorably upon taxpaying as an act of citizenship, and know more about tax policy than they are credited for. That the public discussion of taxes is so distorted by the hatred of government is the fault of right-wing political demagogues and the media that amplify their deceptive claims to speak for public opinion. May a new generation of politicians put these findings to good use!"—Todd Gitlin, Columbia University

"Vanessa Williamson's meticulously researched book should be at the top of your reading list, especially if you have—or want to have—the power to tax and spend the hard-earned dollars of the American people. For a long time, many concluded that Americans find taxes revolting, but Williamson, employing quantitative and qualitative analysis, comes to the opposite conclusion. By asking long-unexplored questions about why we pay taxes and what we believe taxes should pay for, she reveals that Americans see paying taxes as an ethical act and one's civic duty. Taxation with representation is at the core of what it means to be an American."—Heather Boushey, author of Finding Time: The Economics of Work-Life Conflict

"Adam Smith described taxes as a ‘badge of liberty.' Surprised? Then you’ll be even more astonished by what Vanessa Williamson finds: Americans agree. Far from antitax warriors, most believe paying taxes is a vital form of civic participation. They’re sometimes confused, sometimes resentful (particularly of giveaways to the rich and powerful), but mostly shockingly sensible. So, Williamson asks, why aren’t their representatives? Her brilliant answer is a must-read for anyone hoping to understand the distorted debate in Washington."—Jacob S. Hacker, coauthor of American Amnesia: How the War on Government Led Us to Forget What Made America Prosper

"This compelling, beautifully written book is about far more than taxes. It is about what it means to be an American. Contrary to the conventional wisdom, Americans are proud to be taxpayers. In doing so, their citizenship is profoundly expressed."—Kathy Edin, coauthor of $2 a Day: Living on Almost Nothing in America

"Read My Lips is a brilliant and necessary book. Filled with innovative, important, and convincing arguments, it is indispensable for anyone who wants to understand what Americans think about taxes and why. A tour de force."—Isaac William Martin, University of California, San Diego

"Public opinion about taxes has been understudied, or has not been subject to as much rigorous study as it deserves. This informative, authoritative book illuminates the thinking about taxes and related political matters among a cross section of Americans. I learned a great deal about public opinion from reading it."—Robert S. Erikson, Columbia University

"This book argues that despite political rhetoric to the contrary, Americans do not necessarily hate taxes. With its invaluable interview and survey data, the work will interest economists, fiscal sociologists, tax law scholars, political scientists, and public finance scholars."—Dennis J. Ventry Jr., University of California Davis School of Law