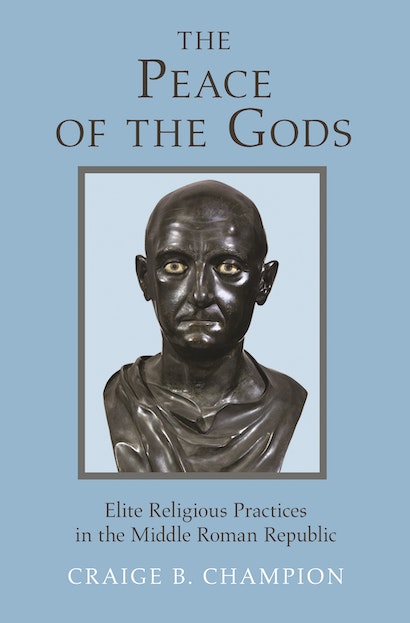 The Peace of the Gods takes a new approach to the study of Roman elites’ religious practices and beliefs, using current theories in psychology, sociology, and anthropology, as well as cultural and literary studies. Craige Champion focuses on what the elites of the Middle Republic (ca. 250–ca. 100 BCE) actually did in the religious sphere, rather than what they merely said or wrote about it, in order to provide a more nuanced and satisfying historical reconstruction of what their religion may have meant to those who commanded the Roman world and its imperial subjects.

The book examines the nature and structure of the major priesthoods in Rome itself, Roman military commanders’ religious behaviors in dangerous field conditions, and the state religion’s acceptance or rejection of new cults and rituals in response to external events that benefited or threatened the Republic. According to a once-dominant but now-outmoded interpretation of Roman religion that goes back to the ancient Greek historian Polybius, the elites didn’t believe in their gods but merely used religion to control the masses. Using that interpretation as a counterfactual lens, Champion argues instead that Roman elites sincerely tried to maintain Rome’s good fortune through a pax deorum or “peace of the gods.” The result offers rich new insights into the role of religion in elite Roman life.

Craige B. Champion is professor of ancient history and classics in the Maxwell School of Citizenship and Public Affairs at Syracuse University. He is the author of Cultural Politics in Polybius's "Histories," the editor of Roman Imperialism: Readings and Sources, and a general editor of the Wiley-Blackwell Encyclopedia of Ancient History.

"The book makes a persuasive case that the study of Roman religion has a lot to gain from increased engagement with theoretical models drawn from other fields, and it points the way forward in this regard."—Celia E. Schultz, Classical Philology

"Champion has produced an accessible and nuanced study of an important question in the study of Roman religion. His approach places individual experience at the center of analysis while keeping the individual’s social and cultural context clearly in view. As a result, his book suggests how we might conceive of the emotions and behaviors of elite Romans who were charged with maintaining the pax deorum."—Meghan DiLuzio, Phoenix Journal

"[The] discussion of ‘cognitive dissonance’ in Roman religion is the most advanced attempt to date to explore its viability in this field. . . . This book is a very substantial contribution to the understanding of pre-Augustan Roman religion—one that all students of the political and social history of the Roman world will do well not to overlook, and one that historians of other periods will find informative and inspiring in equal measure."—Federico Santangelo, American Historical Review

"Champion has written a thought-provoking book with much to recommend it. It joins a growing body of scholarship of both ancient and modern religions that attempts to reinvigorate discussion of the cognitive and emotional elements of religion after a decades-long emphasis on praxis. . . . This book’s erudition, creativity and readability make it a welcome addition for historians, classicists and scholars of religion alike."—Anne E. Truetzel, Journal of Roman Studies

"I want to conclude by stressing that Champion has written a remarkable book that will embolden future scholars to make fuller use of scientific literature. Rarely does one see publications from the Bulletin of Mathematical Biophysics tapped as aides-à-penser for the history of Roman religion. . . . [The] book’s capacity to spark disagreement is ocular proof of its overall success, and there is no doubt in my mind that The Peace of the Gods deserves to occupy a position of prominence in Roman religious studies for the foreseeable future."—Dan-el Padilla Peralta, Histos

"The Peace of the Gods is an important book that offers a very sound answer to a major question about ancient Roman religion."—Greg Woolf, University of London

"This important and accessible book provides a very clear account of the origins, values, and deficits of the ‘elite-instrumentalist' view of Roman religion in the republican period."—Jörg Rüpke, University of Erfurt