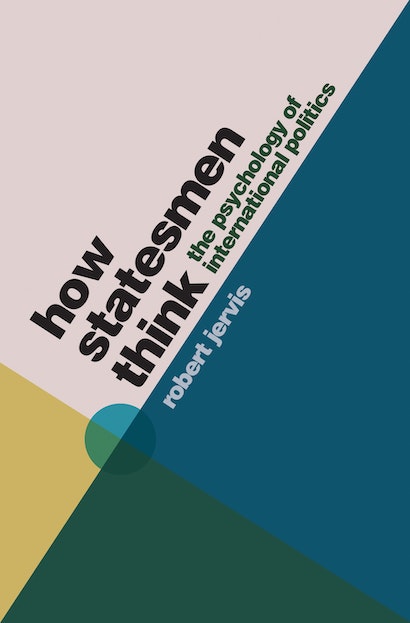 Robert Jervis has been a pioneering leader in the study of the psychology of international politics for more than four decades. How Statesmen Think presents his most important ideas on the subject from across his career. This collection of revised and updated essays applies, elaborates, and modifies his pathbreaking work. The result is an indispensable book for students and scholars of international relations.

How Statesmen Think demonstrates that expectations and political and psychological needs are the major drivers of perceptions in international politics, as well as in other arenas. Drawing on the increasing attention psychology is paying to emotions, the book discusses how emotional needs help structure beliefs. It also shows how decision-makers use multiple shortcuts to seek and process information when making foreign policy and national security judgments. For example, the desire to conserve cognitive resources can cause decision-makers to look at misleading indicators of military strength, and psychological pressures can lead them to run particularly high risks. The book also looks at how deterrent threats and counterpart promises often fail because they are misperceived.

How Statesmen Think examines how these processes play out in many situations that arise in foreign and security policy, including the threat of inadvertent war, the development of domino beliefs, the formation and role of national identities, and conflicts between intelligence organizations and policymakers.

"These essays make an invaluable contribution to understanding 'how statesmen think.' The book is strongly recommended for students and researchers in international relations."—Choice

"Robert Jervis is one of those rare scholars of International Relations whose work is path-breaking and enduring in multiple research areas, ranging from nuclear deterrence to political psychology, from intelligence to complexity theory. . . . That this volume brings together twelve of Jervis's previously published essays on political psychology and international relations is a boon to scholars and practitioners alike."—Balkan Devlen, International Affairs

"An accessible and powerful introduction to one of the most important scholars in the history of international relations, this magisterial collection of Robert Jervis's most significant essays, gathered here for the first time, comprehensively applies principles of psychology to enduring problems in international politics. Displaying Jervis's trademark brilliance and analytic rigor, this is a phenomenal contribution to our understanding not only of how statesmen think, but of how the rest of us do as well."—Rose McDermott, Brown University

"I have been reading and learning from Robert Jervis for forty years. No one synthesizes psychological and political insights better. This book captures the best of his best."—Philip E. Tetlock, University of Pennsylvania

"How Statesmen Think brings together all of the major ideas that have made Robert Jervis one of the top international relations thinkers of our time, indeed of all time. It includes a number of lesser-known essays, some of which even close observers of his work might not know. And of course, like all of Jervis's writing, it is accessible to the broad policy community and even the general public. Those like me who study how statesmen think owe him immensely."—Brian Rathbun, University of Southern California

"Robert Jervis's How Statesmen Think is a very good companion to his Perception and Misperception in International Politics. The value of collecting these essays is that they reinforce and elaborate on each other in different contexts, providing more depth and a richer understanding."—Deborah Welch Larson, University of California, Los Angeles