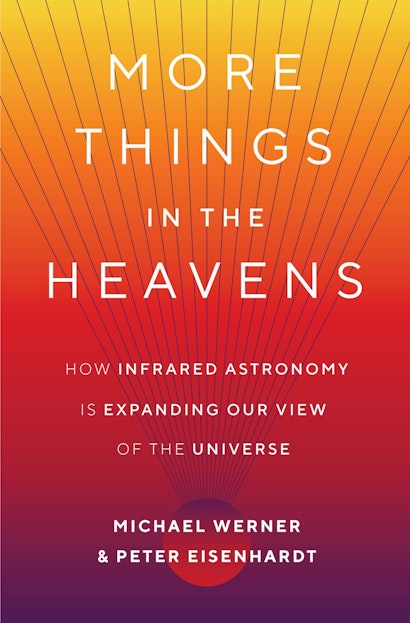 Astronomers have been studying the heavens for thousands of years, but until recently much of the cosmos has been invisible to the human eye. Launched in 2003, the Spitzer Space Telescope has brought the infrared universe into focus as never before. Michael Werner and Peter Eisenhardt are among the scientists who worked for decades to bring this historic mission to life. Here is their inside story of how Spitzer continues to carry out cutting-edge infrared astronomy to help answer fundamental questions that have intrigued humankind since time immemorial: Where did we come from? How did the universe evolve? Are we alone?

In this panoramic book, Werner and Eisenhardt take readers on a breathtaking guided tour of the cosmos in the infrared, beginning in our solar system and venturing ever outward toward the distant origins of the expanding universe. They explain how astronomers use the infrared to observe celestial bodies that are too cold or too far away for their light to be seen by the eye, to conduct deep surveys of galaxies as they appeared at the dawn of time, and to peer through dense cosmic clouds that obscure major events in the life cycles of planets, stars, and galaxies.

Featuring many of Spitzer’s spectacular images, More Things in the Heavens provides a thrilling look at how infrared astronomy is aiding the search for exoplanets and extraterrestrial life, and transforming our understanding of the history and evolution of our universe.

"Spitzer . . . merits a detailed and authoritative account of its successes, and More Things in the Heavens is just that."—Michael Rowan-Robinson, Nature

"For serious space fans, this ode to NASA’s Spitzer Space Telescope reveals what we’ve learned by looking at the universe through an infrared lens."—Science News

"Werner and Eisenhardt, both at the Jet Propulsion Laboratory, have been involved with Spitzer for decades and know their subject intimately. After a whirlwind tour of the universe as seen in the infrared, they cover in detail every aspect of astronomy that Spitzer has touched."—Rick Fienberg, Sky & Telescope

"A fascinating insight into how the scientific process of discovery works, putting the results made by the huge team using Spitzer in context with the wider research field."—Dr. Chris North, BBC Sky at Night

"More Things in the Heavens is a well-written account of the accomplishments of a great observatory over its more than 16-year lifetime."—Edward L. Wright, Physics Today

"More Things in the Heavens is an unashamed celebration of one of the great scientific projects of the early 21st century. . . . It is a labour of love by two men who committed their lives to transform a dream into reality, to bringing us a deeper understanding of the Universe with a mirror no bigger than the one in most bathrooms."—Nick Smith, Engineering & Technology

"This is a most impressive story, not just for specialists, clearly told and profusely illustrated. I found it a pleasure to read and recommend it strongly."—Peredur Williams, The Observatory

"More Things in the Heavens reveals how important infrared astronomy has been to increasing our understanding of the cosmos."—Iain Todd, BBC Sky at Night

"A timely and welcome addition to this genre."—Manoj Puravankara, Current Science

"Had we known how wonderful the infrared is, we would have been born with infrared-sensitive eyes. Fortunately, NASA gave us just that with the Spitzer Space Telescope, and it is a joy to have Werner and Eisenhardt share with us what astronomers have discovered with it and how. From the black hole at the center of the Milky Way to the farthest galaxies and quasars, this insightful book describes how these infrared observations are revealing exciting celestial objects."—Jay M. Pasachoff, coauthor of The Cosmos: Astronomy in the New Millennium

"The Spitzer Space Telescope opened up a new window on the cosmos, yielding new perspectives and crucial insights into the genesis of planets, stars, and galaxies. Werner and Eisenhardt, two leading scientists who each committed decades to the project, describe these discoveries while also giving due weight to the intense planning and prolonged campaigning that turned their vision into such a spectacular success."—Martin Rees, Astronomer Royal, author of On the Future: Prospects for Humanity

"A magnificent tour of a wonderful history. Werner and Eisenhardt vividly describe what we saw with the Spitzer Space Telescope's small but mighty infrared eye, from distant galaxies shrouded in dust to glowing clouds making new stars and planets. Spitzer and its human masters will amaze you."—John C. Mather, Nobel Prize–winning astrophysicist

"Werner is fond of using the Shakespeare quote 'Though she be but little, she is fierce' to describe the Spitzer mission, and this book aptly demonstrates that a telescope less than a yard in diameter can achieve results that are fierce in revolutionizing our view of the universe."—Marcia Rieke, University of Arizona

"This is a lucid, vivid, and accessible synthesis of the cosmic discoveries made by the Spitzer telescope. Crafted with verve by two pioneering explorers of the infrared universe, it captures the excitement and enthusiasm of the thousands of scientists who contributed to this outstanding mission."—Simon Mitton, coauthor of Heart of Darkness: Unraveling the Mysteries of the Invisible Universe

“This exceptional book blends good storytelling and readable prose to describe our modern view of the cosmos from the unique vantage point of the Spitzer Space Telescope. Werner and Eisenhardt have devoted three decades of their lives to Spitzer and are highly qualified to provide this account of one of NASA’s most successful missions.”—Ian McLean, University of California, Los Angeles

“More Things in the Heavens is engagingly written for general audiences, but also features a lot of substantial science—enough that I learned quite a bit, on diverse topics ranging from exoplanets to high-redshift galaxies. A pleasurable read.”—Bruce T. Draine, Princeton University