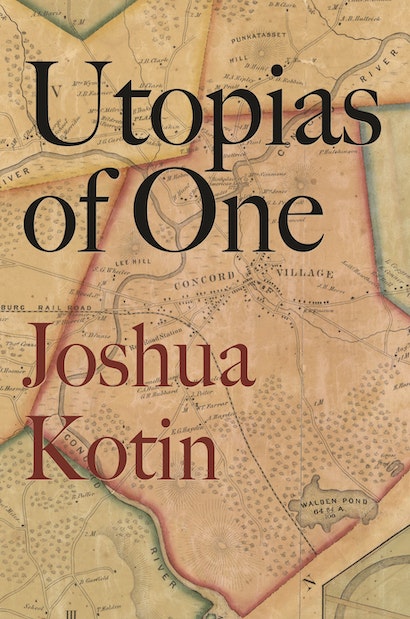 Utopias fail. Utopias of one do not. They are perfect worlds. Yet their success comes at a cost. They are radically singular—and thus exclusive and inimitable.

Utopias of One is a major new account of utopian writing. Joshua Kotin examines how eight writers—Henry David Thoreau, W. E. B. Du Bois, Osip and Nadezhda Mandel’shtam, Anna Akhmatova, Wallace Stevens, Ezra Pound, and J. H. Prynne—construct utopias of one within and against modernity’s two large-scale attempts to harmonize individual and collective interests: liberalism and communism. The book begins in the United States between the buildup to the Civil War and the end of Jim Crow; continues in the Soviet Union between Stalinism and the late Soviet period; and concludes in England and the United States between World War I and the end of the Cold War. The book, in this way, captures how writers from disparate geopolitical contexts resist state and normative power to construct perfect worlds—for themselves alone.

Utopias of One makes a vital contribution to debates about literature and politics, presenting innovative arguments about aesthetic difficulty, personal autonomy, and complicity and dissent. The book also models a new approach to transnational and comparative scholarship, combining original research in English and Russian to illuminate more than a century and a half of literary and political history.

Joshua Kotin is associate professor of English at Princeton University and an affiliated faculty member in the university’s Program in Russian, East European, and Eurasian Studies.

"[F]or those who are interested in attaining an expanded understanding of the political potential of Thoreau's writings, Utopias of One will be a welcome addition to the body of Thoreau scholarship"—David Faflik, Thoreau Society

"Truly global in perspective and local in detail . . . Kotin’s Utopias of One breaks a new path in conceiving a writer’s utopian position as a form of political resistance. . . . The book has great appeal for readers and researchers of utopian literature, and it could also have far-reaching impact on empire studies."—Feng Dong, Critical Inquiry

"Kotin offers many gripping insights. . . . For those interested in the trajectories that often profound disillusionment took, particularly through the medium of poetry, this is an engaging and provocative study."—Gregory Claeys, Modern Philology

"This beautifully written book convincingly redefines the progressive potential of utopian thinking, locating it in a refusal to formulate totalizing programs for the future as well as in an attention to the present and the minute, the fragile and the precarious. Provocatively, Kotin does not spend a lot of time on the standard dismissal of utopianism as apolitical snobbism or aesthetic idealism, and instead detects in poetry forces intense enough to enact utopian successes."—Branka Arsić, Columbia University

"Joshua Kotin identifies an aim—autonomy—common to writers across centuries and continents. His analysis of aesthetic success combines sensitivity to formal dynamics with an acute sense of the social dilemmas form is tasked with resolving. In its broad conceptual architecture, Utopias of One finds a way to integrate the universal, existential dimensions of literature with a sophisticated account of all the forces that constrain it."—Michael W. Clune, author of Writing Against Time

"In elegant and sinewy prose, Kotin presents not so much a cross-national study but something better, a non-national study. Despite the different languages and periods of his iconoclastic authors, Kotin illuminates the work of each and, against all odds, their connection to one another and to us."—Charles Bernstein, author of Pitch of Poetry

"It's a delight to encounter American and Russian poets juxtaposed in this way. Creative, original, and with clear and lively prose, Utopias of One is thoroughly enjoyable."—Brian M. Reed, University of Washington