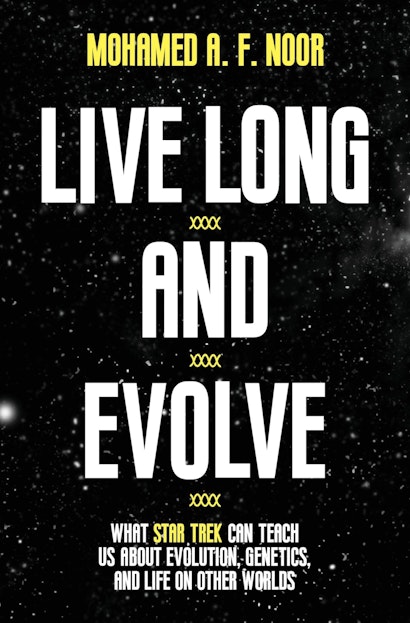 In Star Trek, crew members travel to unusual planets, meet diverse beings, and encounter unique civilizations. Throughout these remarkable space adventures, does Star Trek reflect biology and evolution as we know it? What can the science in the science fiction of Star Trek teach us? In Live Long and Evolve, biologist and die-hard Trekkie Mohamed Noor takes readers on a fun, fact-filled scientific journey.

Noor offers Trekkies, science-fiction fans, and anyone curious about how life works a cosmic gateway into introductory biology, including the definitions and origins of life, DNA, reproduction, and evolutionary processes, such as natural selection and genetic drift. For instance, he shows how the rapid change in a population of nanite robots follows basic principles of natural selection that apply to species on Earth. He explains how certain creatures depicted in the series are bisexual, not asexual, and what evolutionary advantage that difference provides. And he considers factors that affect successful interspecies mating and delves into what keeps species distinct. Noor discusses the importance of research and how Star Trek has influenced scientists to engage in cutting-edge work.

Giving readers irresistible and entertaining insights, Live Long and Evolve looks at some of the powerful science behind one of the most popular and longest-running science-fiction series.

Mohamed A. F. Noor, besides being a Trekkie, is a professor in the Biology Department at Duke University. He is the editor in chief of the journal Evolution and author of You’re Hired! Now What?: A Guide for New Science Faculty. He lives in Durham, North Carolina. 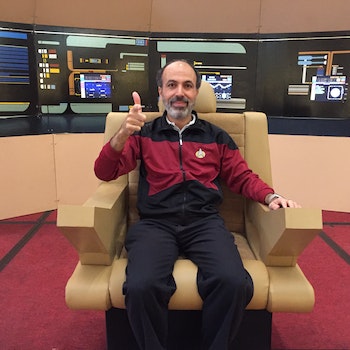 "With a light, accessible style, [Noor] juxtaposes Star Trek scenarios with near-alien examples of life on Earth. . . . Noor wants his readers to understand that science, like fiction, is rife with intrigue."—Erin Zimmerman, Los Angeles Review of Books

"Whether or not your knowledge of Star Trek begins and ends with Mr. Spock’s tapered ears. . . . Live Long and Evolve’s thesis empowers."—Todd B. Gruel, PopMatters

“I played Ensign Harry Kim on Star Trek Voyager and started out in college as a biology major, so this book resonates with me in a unique way. In Live Long and Evolve, Mohamed Noor draws upon his extensive knowledge of Star Trek to help explain the nuances of evolutionary biology with a style that is both informative and entertaining.”—Garrett Wang

“In Live Long and Evolve, Mohamed Noor uses Star Trek, a show that probed the deepest questions of biology, as a springboard into some of the most exciting fields of science.”—Carl Zimmer, author of She Has Her Mother’s Laugh: The Power, Perversions, and Potential of Heredity

“Calling all Trekkies! The answers to questions about evolution may not be found in Star Trek, but they just might be in this wry and wonderful new book. Live Long and Evolve turns what sounds like meaningless biobabble from the shows into thoughtful explanations of everything from mutations and sexual reproduction to what life really is.”—Marlene Zuk, author of Paleofantasy: What Evolution Really Tells Us about Sex, Diet, and How We Live

“A world-class geneticist and lifelong Trekkie, Mohamed Noor combines his two passions in this wonderful new book. To read it is the only logical course of action.”—Lee Alan Dugatkin, coauthor of How to Tame a Fox (and Build a Dog): Visionary Scientists and a Siberian Tale of Jump-Started Evolution

“Live Long and Evolve leverages the huge amount of interest in Star Trek to examine basic concepts of biology, genetics, and evolution. Exploring where the show gets it right and gets it wrong, Mohamed Noor does a lovely job tying an incredibly popular and enduring set of characters and stories to real science. This engaging, clear book isn’t afraid of having fun.”—Maria E. Orive, University of Kansas

“This effectively organized and well-written book uses examples from various Star Trek shows and movies to illustrate the fundamentals of biology, notably evolution and genetics. Arguing for the importance of basic science, it will be useful and of interest to many audiences: teachers, scientists, and Star Trek fans of all ages.”—Norman A. Johnson, author of Darwinian Detectives: Revealing the Natural History of Genes and Genomes