Why efforts to improve American higher educational attainment haven't worked, and where to go from here 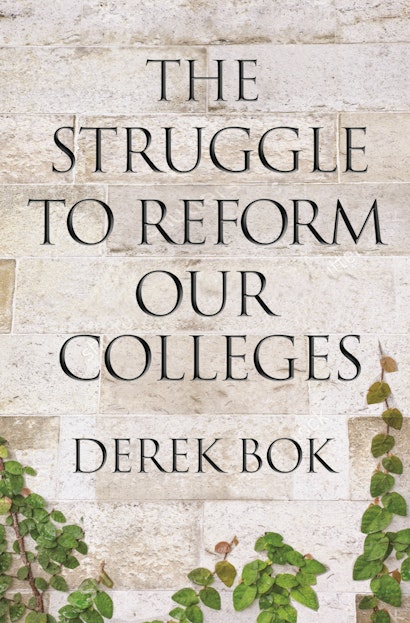 During the first decade of this century, many commentators predicted that American higher education was about to undergo major changes that would be brought about under the stimulus of online learning and other technological advances. Toward the end of the decade, the president of the United States declared that America would regain its historic lead in the education of its workforce within the next ten years through a huge increase in the number of students earning “quality” college degrees.

Several years have elapsed since these pronouncements were made, yet the rate of progress has increased very little, if at all, in the number of college graduates or the nature and quality of the education they receive. In The Struggle to Reform Our Colleges, Derek Bok seeks to explain why so little change has occurred by analyzing the response of America’s colleges; the influence of students, employers, foundations, accrediting organizations, and government officials; and the impact of market forces and technological innovation. In the last part of the book, Bok identifies a number of initiatives that could improve the performance of colleges and universities. The final chapter examines the process of change itself and describes the strategy best calculated to quicken the pace of reform and enable colleges to meet the challenges that confront them.

Derek Bok is the 300th Anniversary University Research Professor, professor of law, and president emeritus of Harvard University. His many books include Higher Education in America, Our Underachieving Colleges, and Universities in the Marketplace (all Princeton).

"Derek Bok has written a clear-eyed analysis of the challenges facing those interested in reforming our nation's colleges. Informed by data, scholarship, and the wisdom of experience, Bok's perspective is that of a thoughtful but loving critic, and he pulls no punches. His critiques of faculty, students, college presidents, trustees, foundations, and government policymakers are spot-on. All who wish to improve higher education should read this book."—Lawrence S. Bacow, president emeritus of Tufts University

"In The Struggle to Reform Our Colleges, Derek Bok is rightly tough on colleges and universities for their failure to improve educational outcomes and graduation rates, leading to a corresponding negative effect on economic growth and income inequality. Exploring the ways that student learning should be strengthened, Bok demonstrates how the stars have to be aligned between the government, foundations, thoughtful administrators, and faculty to create a productive environment for reform."—Mary Patterson McPherson, president emeritus of Bryn Mawr College

"The Struggle to Reform Our Colleges provides an insightful, balanced analysis of the problems facing higher education and does an excellent job offering the background needed to understand the issues. Bok reviews the arguments for increasing postsecondary educational attainment with a strong focus on the quality of education and what students actually learn. He is realistic about the barriers to strengthening the system but is refreshingly optimistic about the prospects for meaningful progress."—Sandy Baum, author of Student Debt

"This ambitious book argues that we are at a moment of change and reform in higher education. The United States is falling behind other countries in the share of the population with postsecondary degrees, and at the same time advances in teaching and the advent of new technology are opening opportunities. Assessing this progress, The Struggle to Reform Our Colleges yields important discussion. I learned a great deal."—Thomas Bailey, coauthor of Redesigning America's Community Colleges