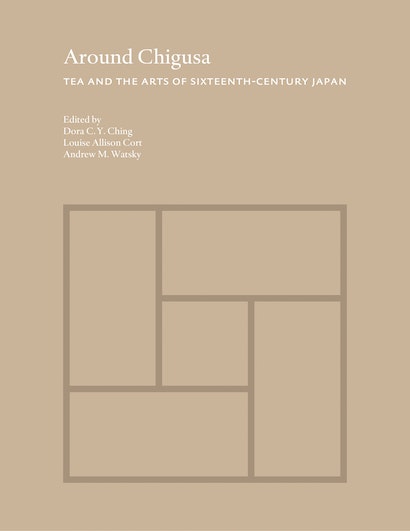 Around Chigusa investigates the cultural and artistic milieu in which a humble jar of Chinese origin dating to the thirteenth or fourteenth century became Chigusa, a revered, named object in the practice of formalized tea presentation (chanoyu) in sixteenth-century Japan. This tea-leaf storage jar lies at the nexus of interlocking personal networks, cultural values, and aesthetic idioms in the practice and appreciation of tea, poetry, painting, calligraphy, and Noh theater during this formative period of tea culture. The book’s essays set tea in dialogue with other cultural practices, revealing larger cultural paradigms that informed the production, circulation, and reception of the artifacts used and displayed in tea. Key themes include the centrality of tea to the social life of and interaction among warriors, merchants, and the courtly elite; the multifaceted relationship between things wa (Japanese) and kan (Chinese) and between tea and poetry; the rise of new formats for display of the visual and calligraphic arts; and collecting and display as an expression of political power.

Dora C. Y. Ching is associate director of the P. Y. and Kinmay W. Tang Center for East Asian Art at Princeton University. She is the coeditor of numerous books, including The Family Model in Chinese Art and Culture(Princeton). Louise Allison Cort is curator for ceramics at the Smithsonian’s Freer Gallery of Art and Arthur M. Sackler Gallery. Her books include Isamu Noguchi and Modern Japanese Ceramics. Andrew M. Watsky is professor of Japanese art and archaeology at Princeton University. He is the author of Chikubushima: Deploying the Sacred Arts in Momoyama Japan. He and Cort are the coeditors of Chigusa and the Art of Tea.

"The inclusion of ninety-nine color illustrations of extremely high quality makes this book visually appealing. . . . They significantly enhance the reader’s appreciation of the analysis of the letter and textile in question."—Rebecca Corbett, CAA Reviews