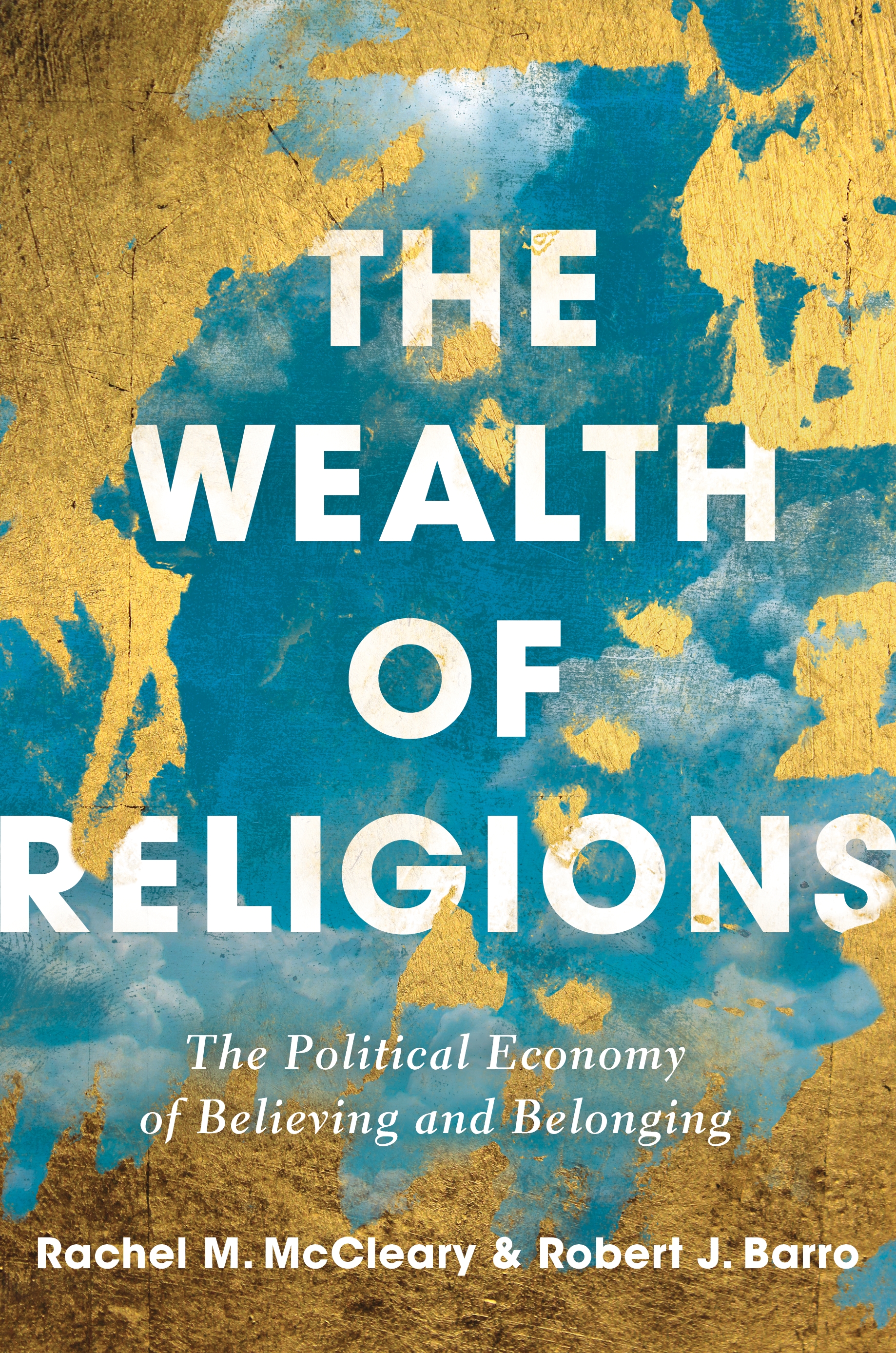 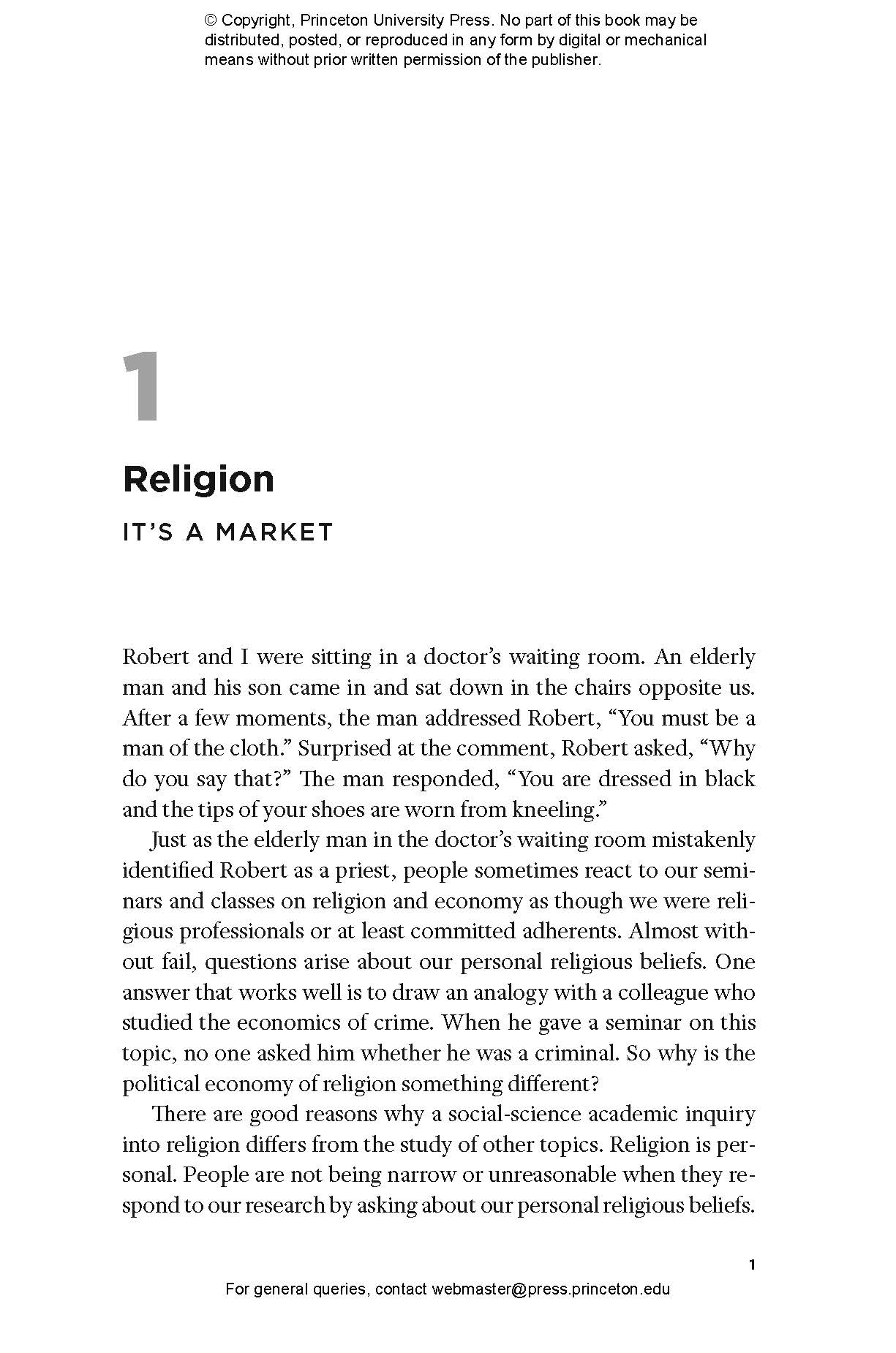 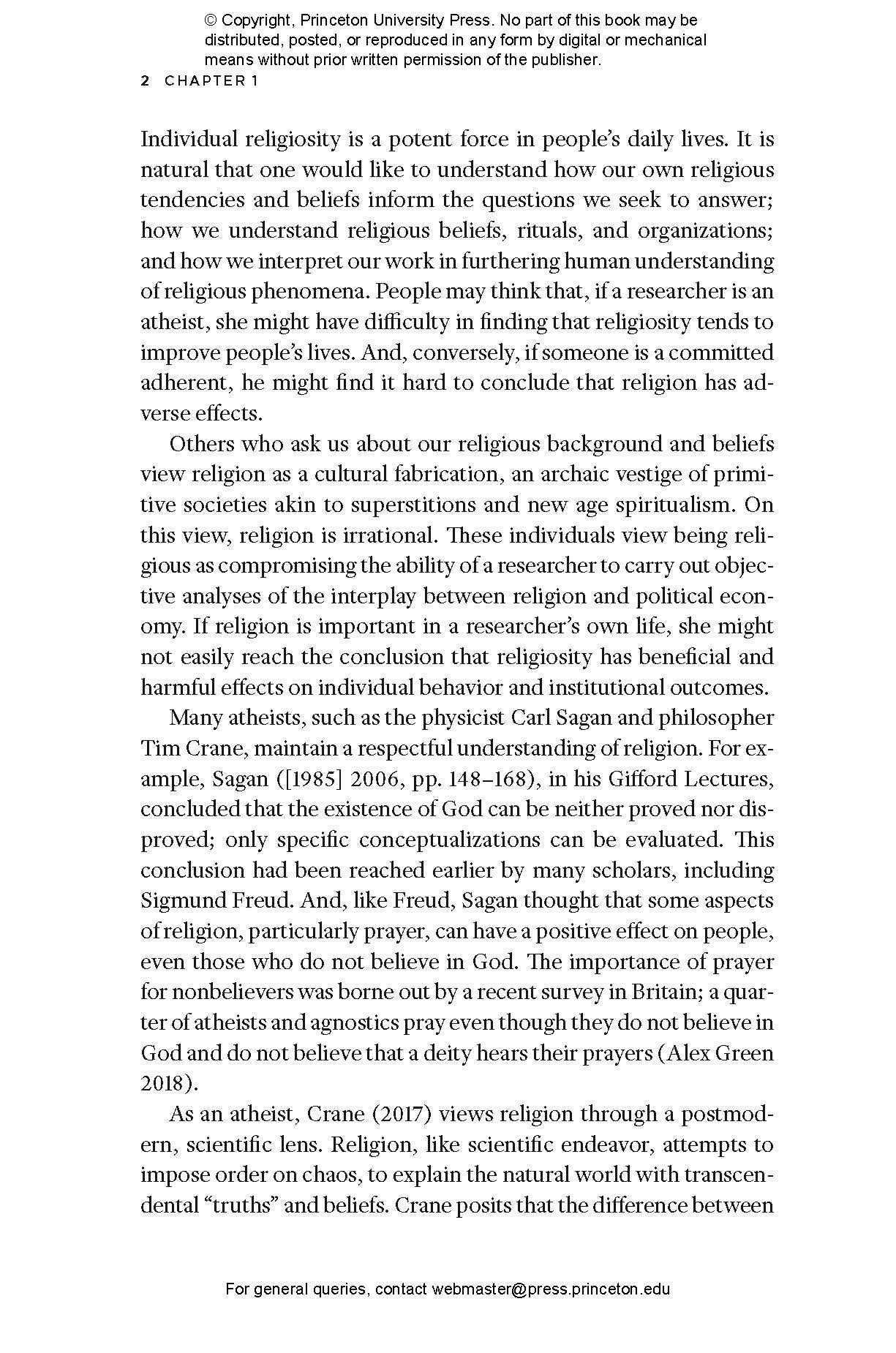 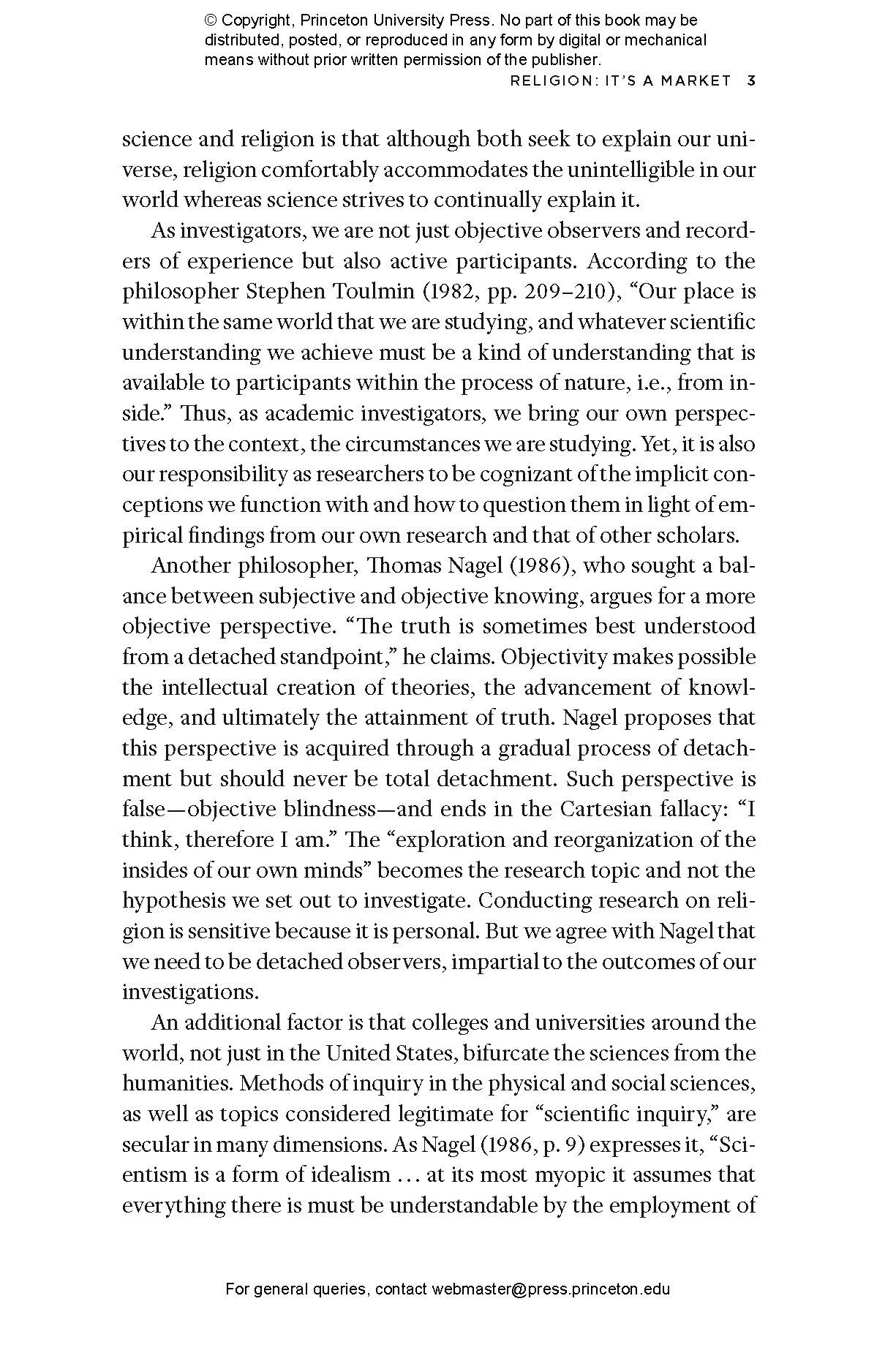 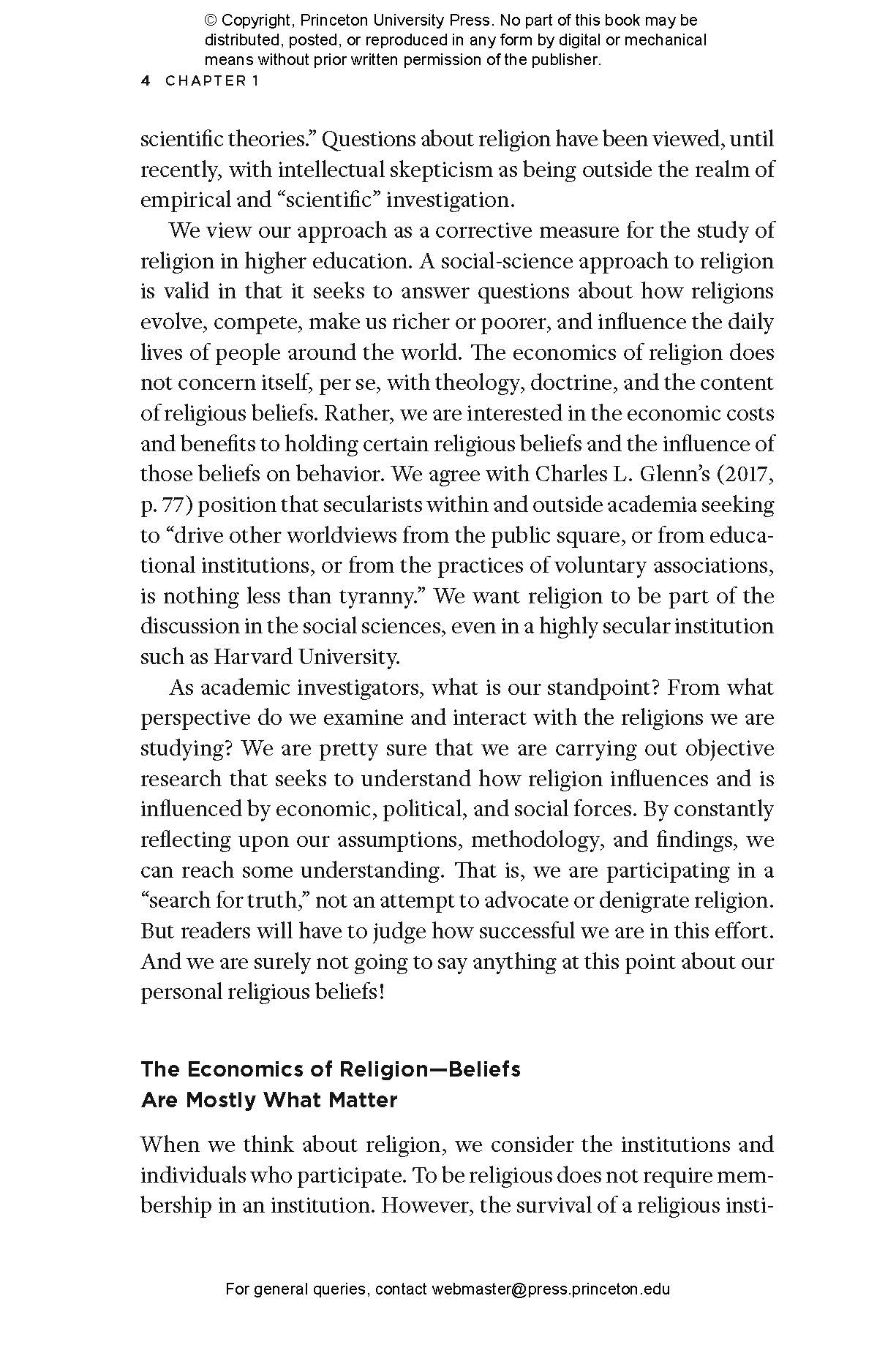 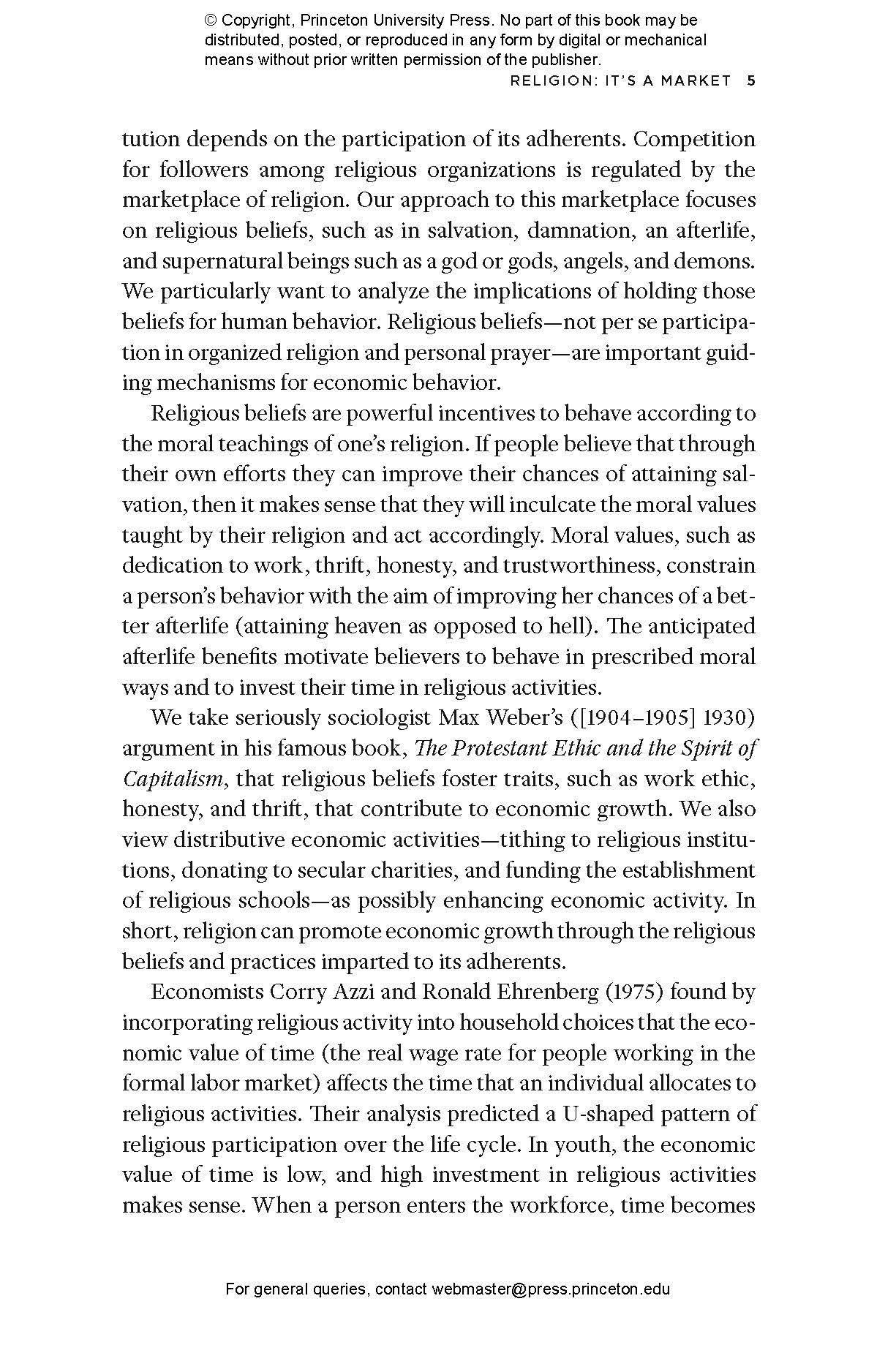 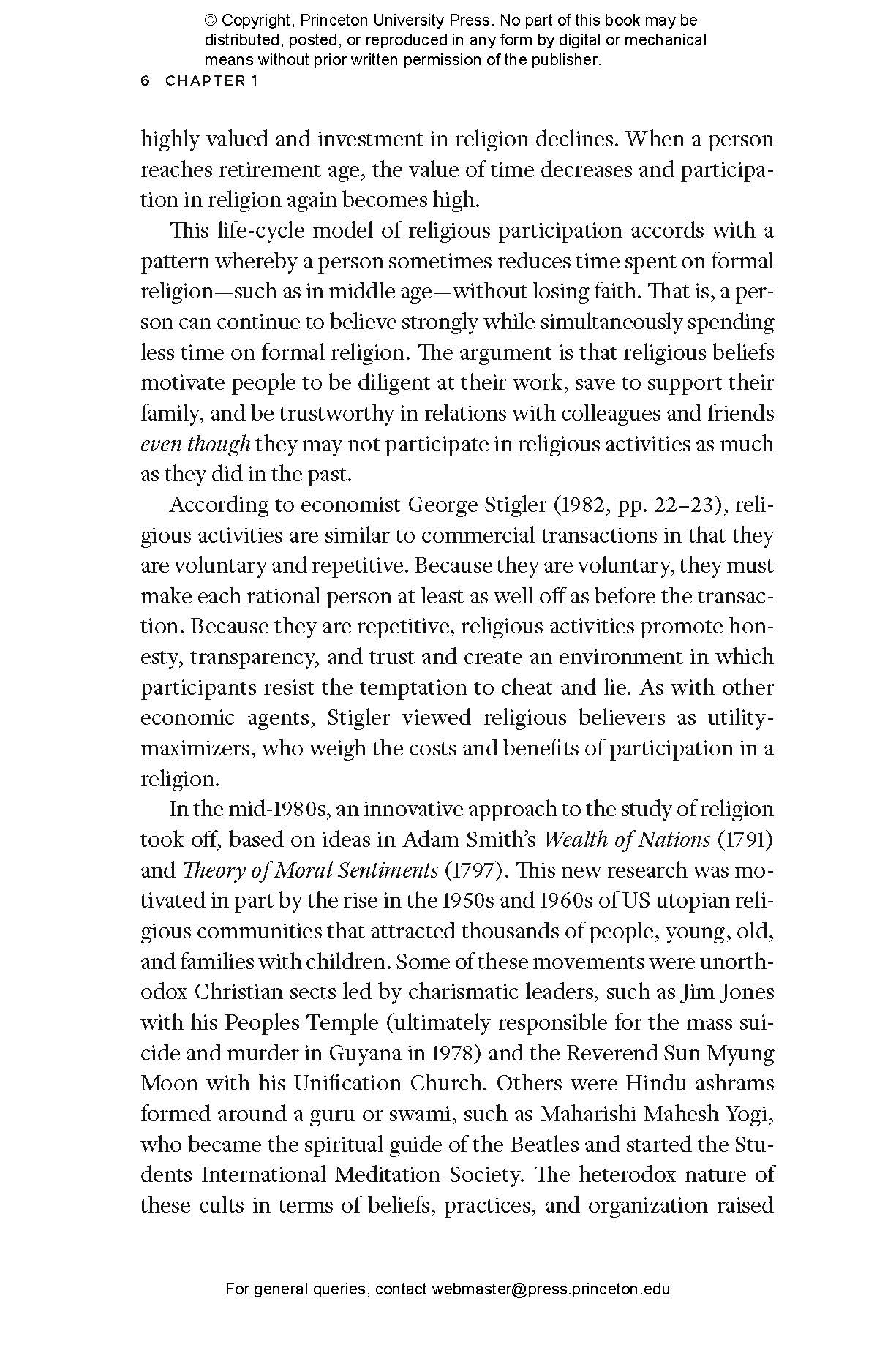 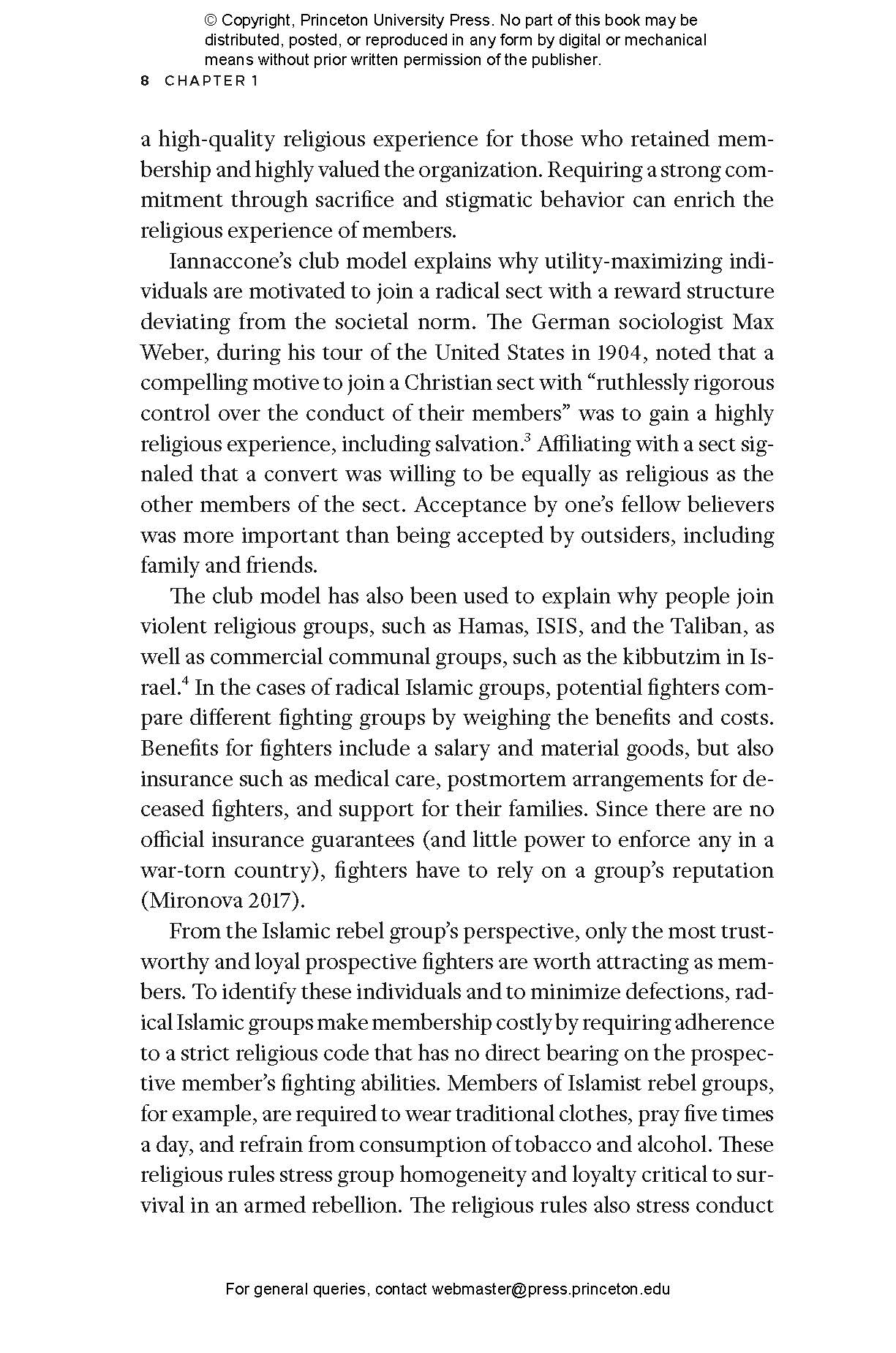 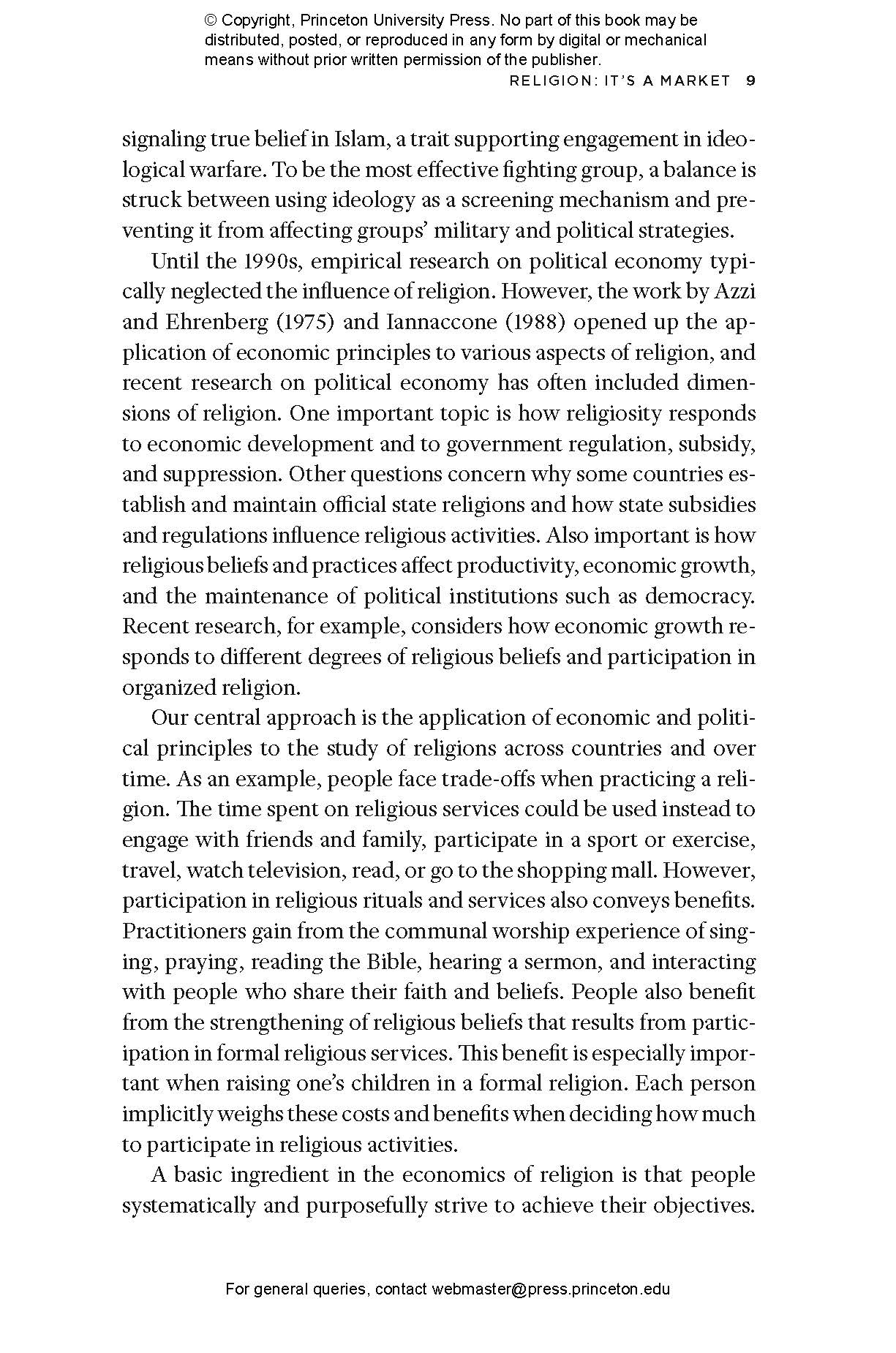 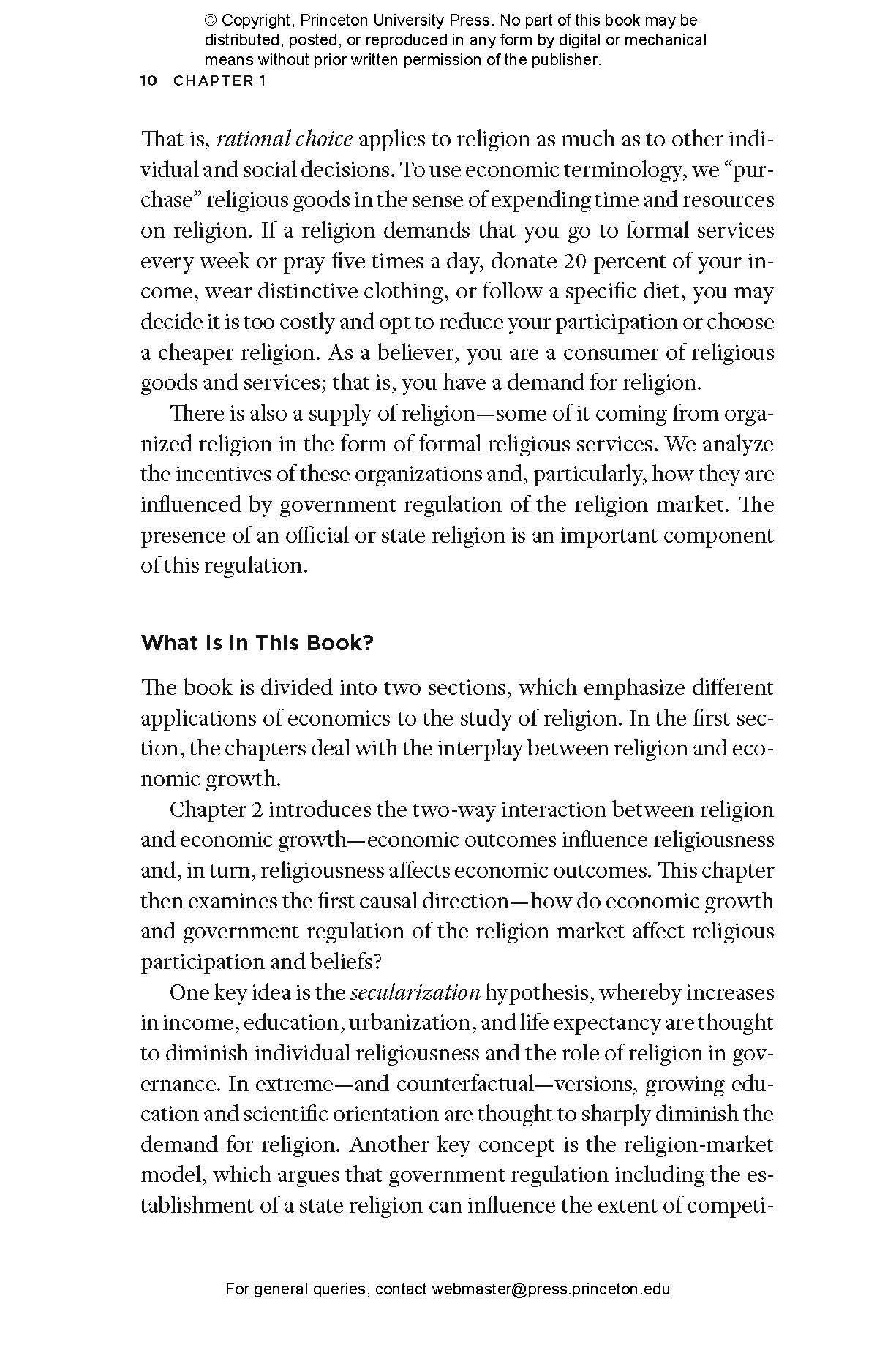 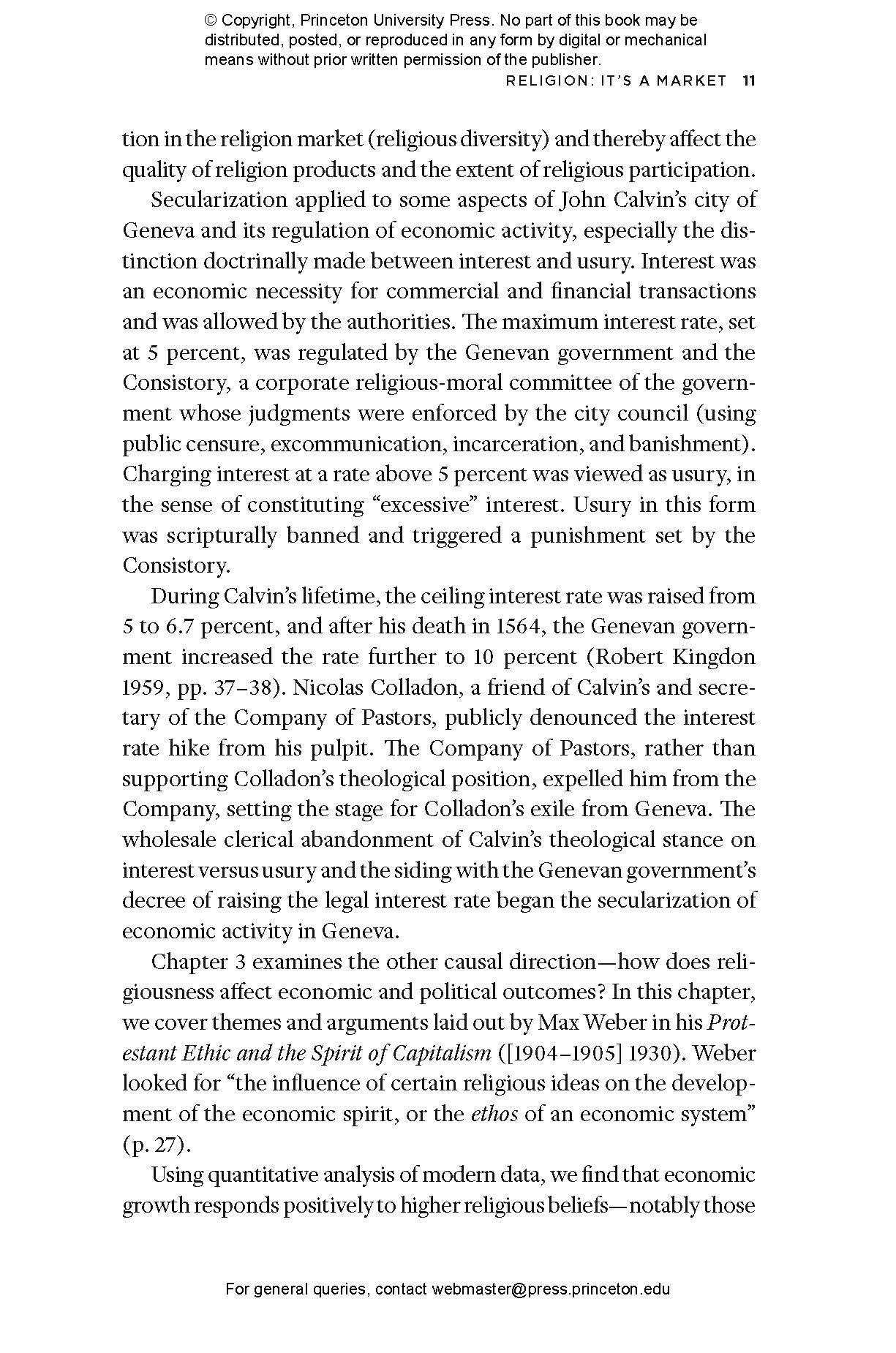 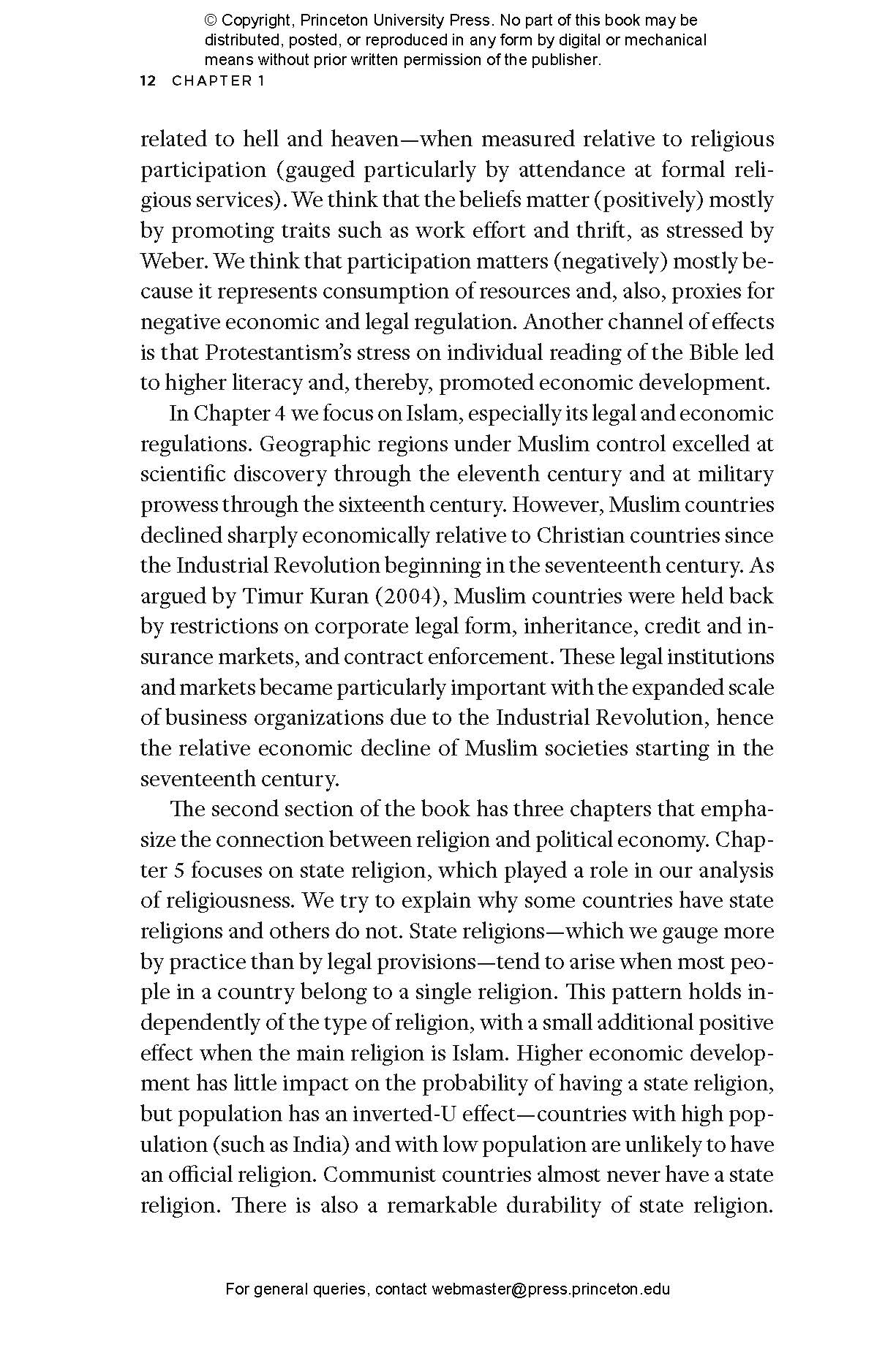 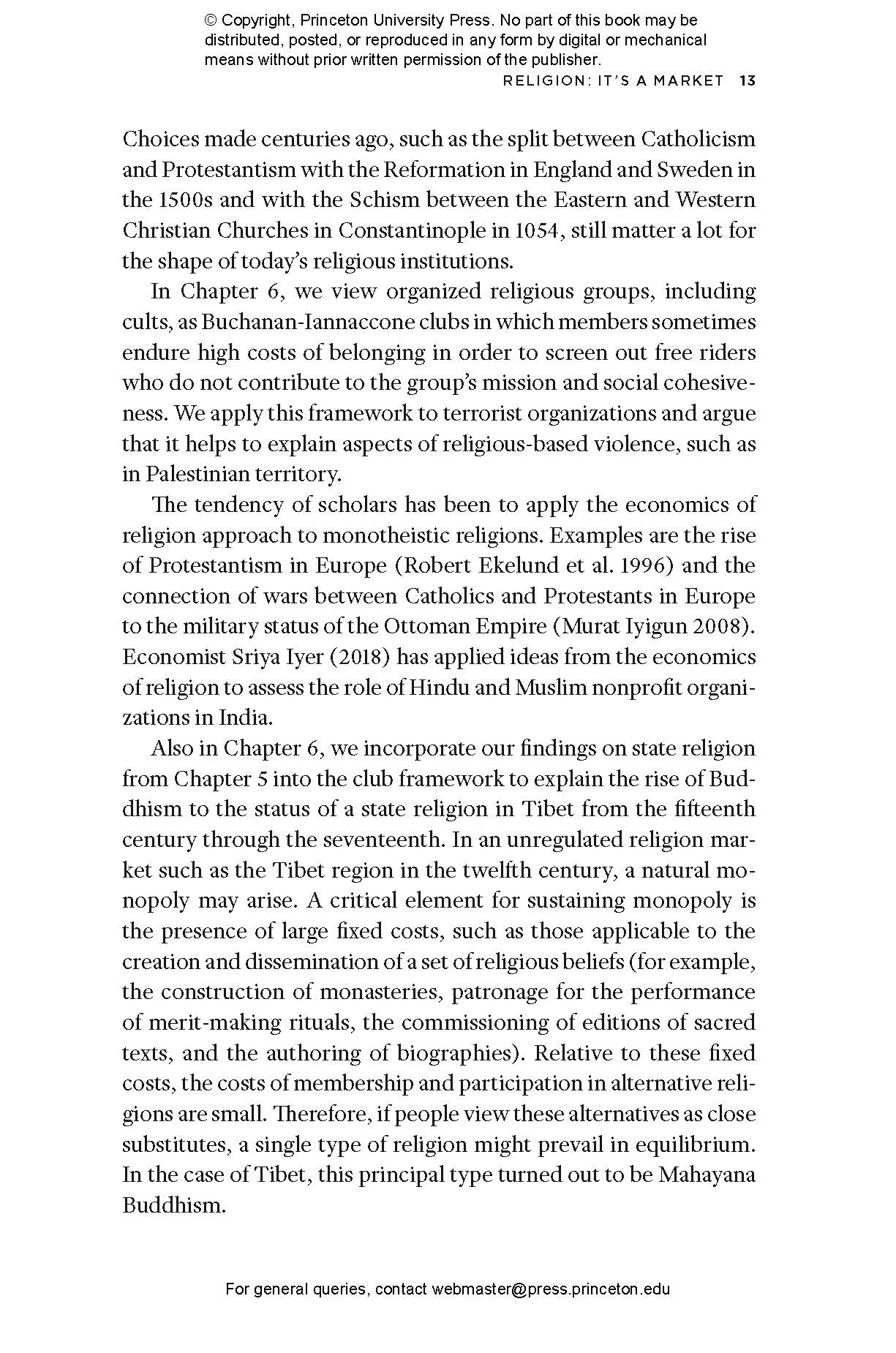 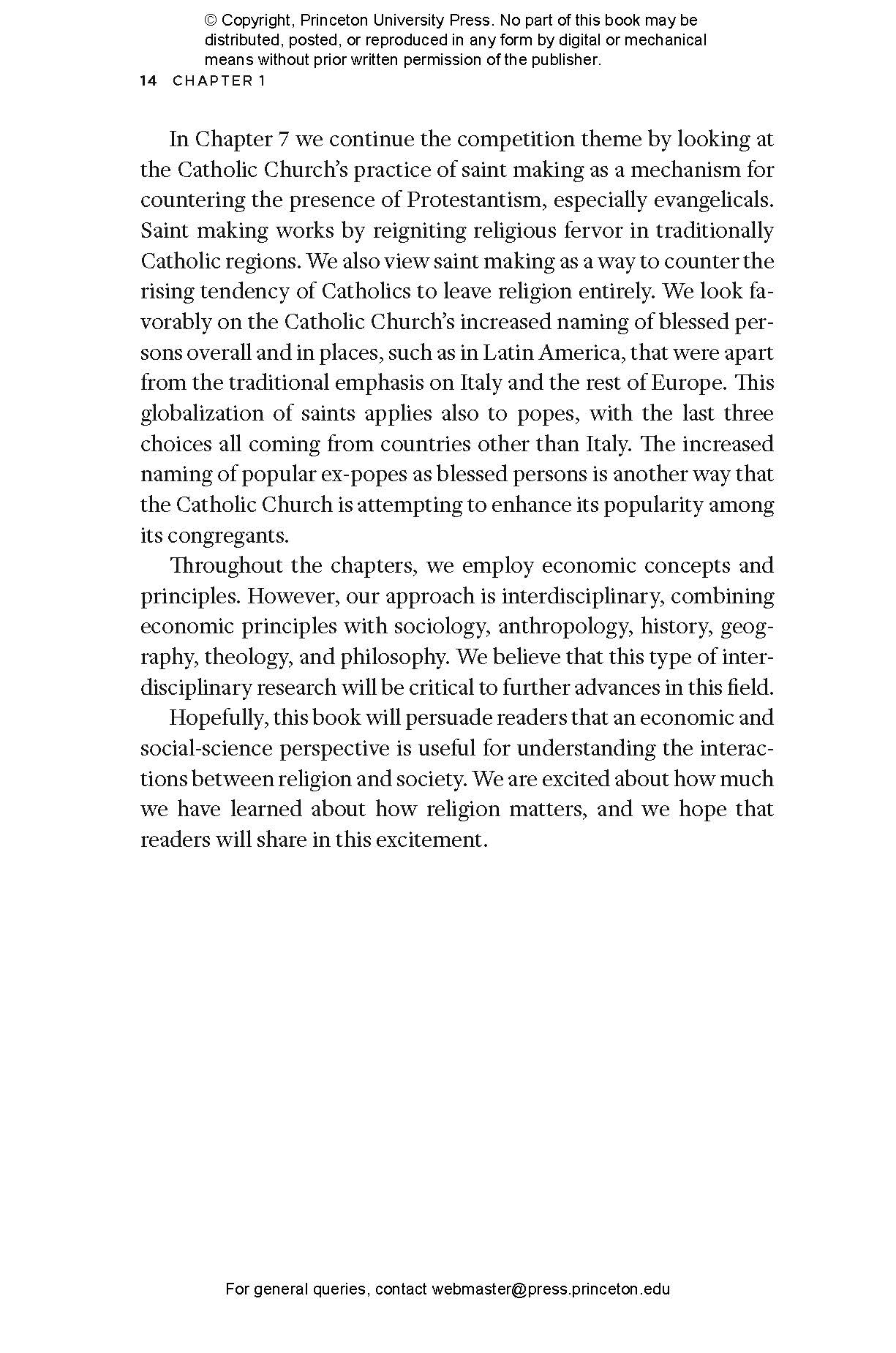 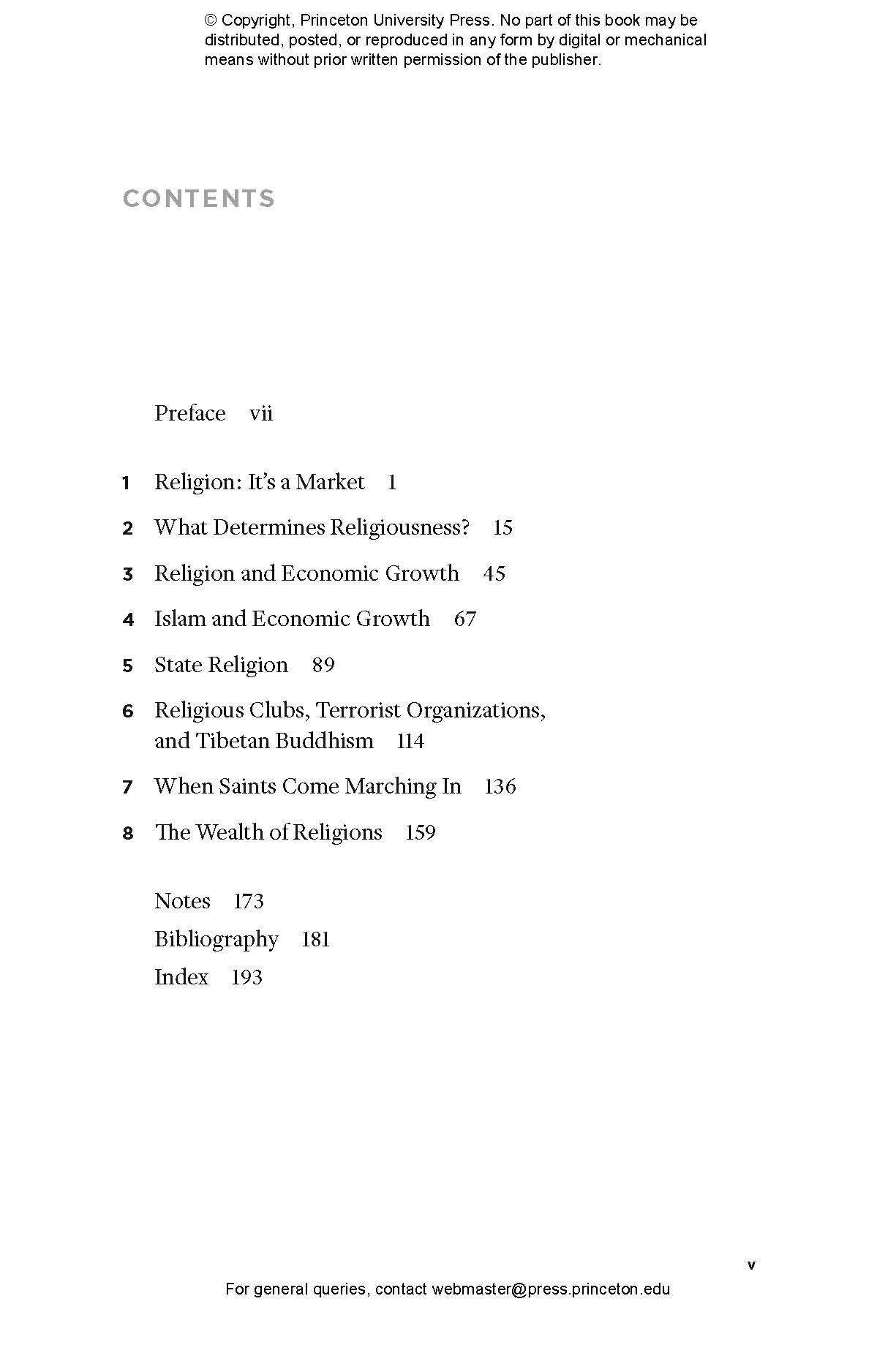 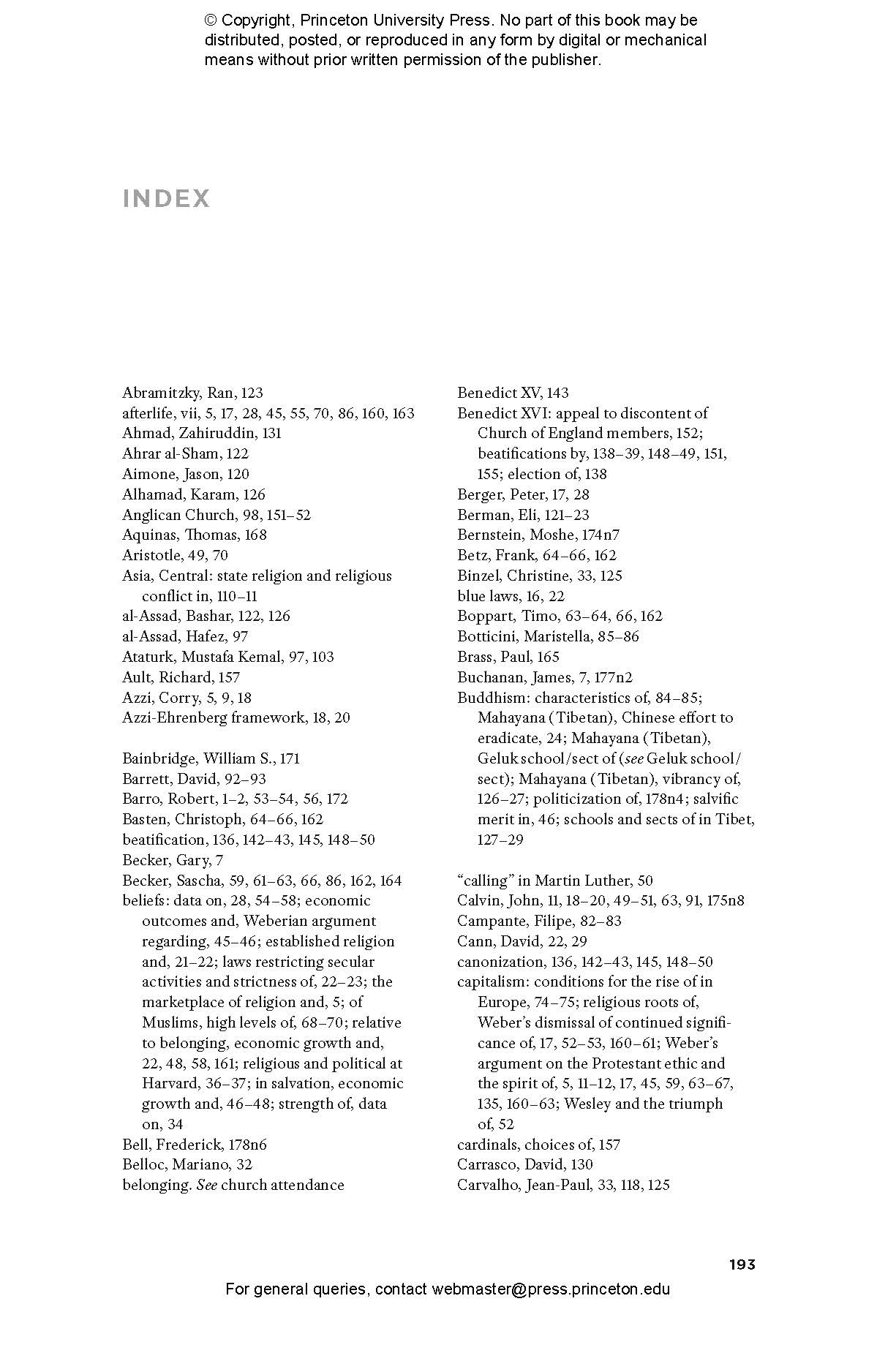 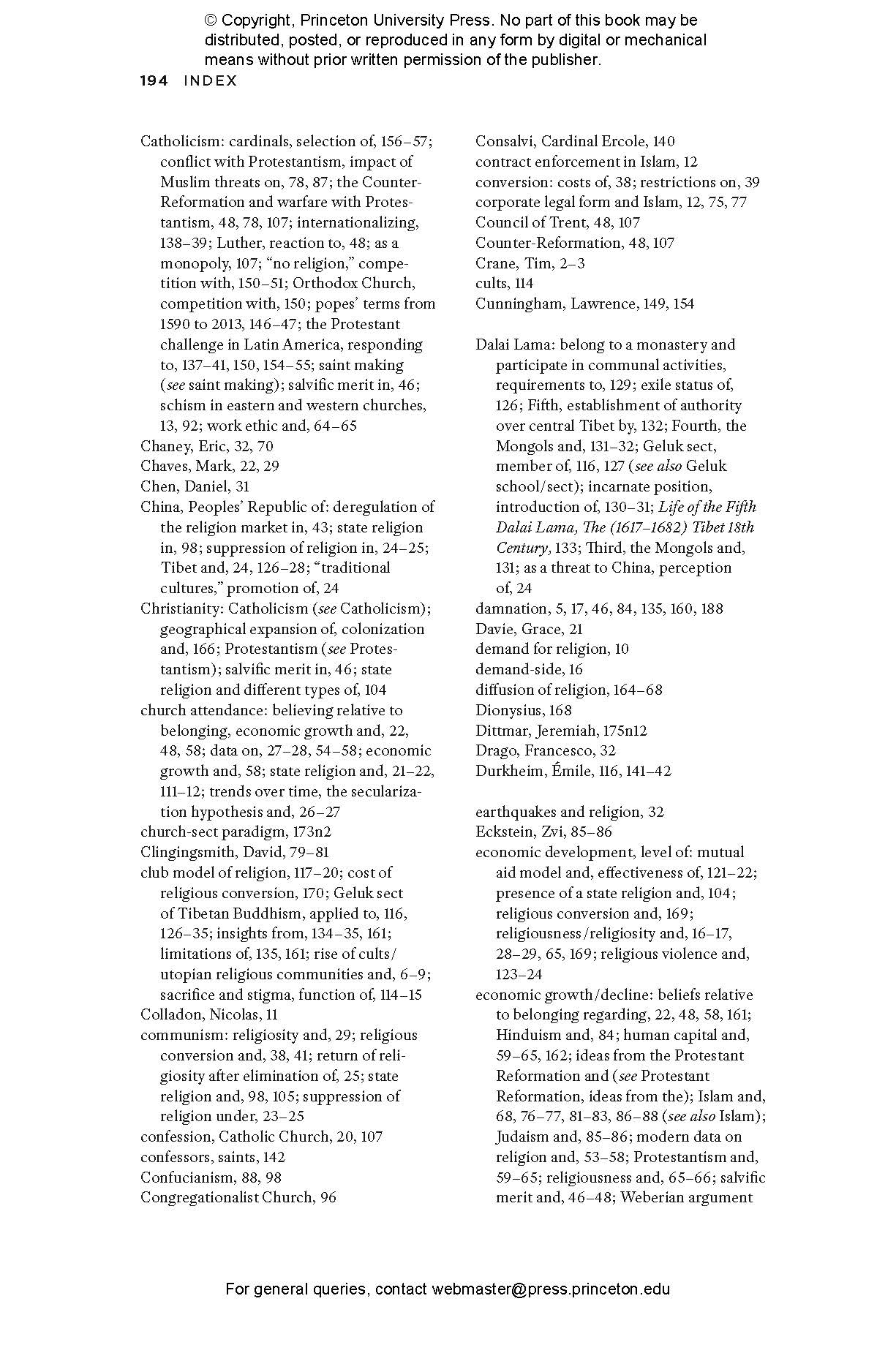 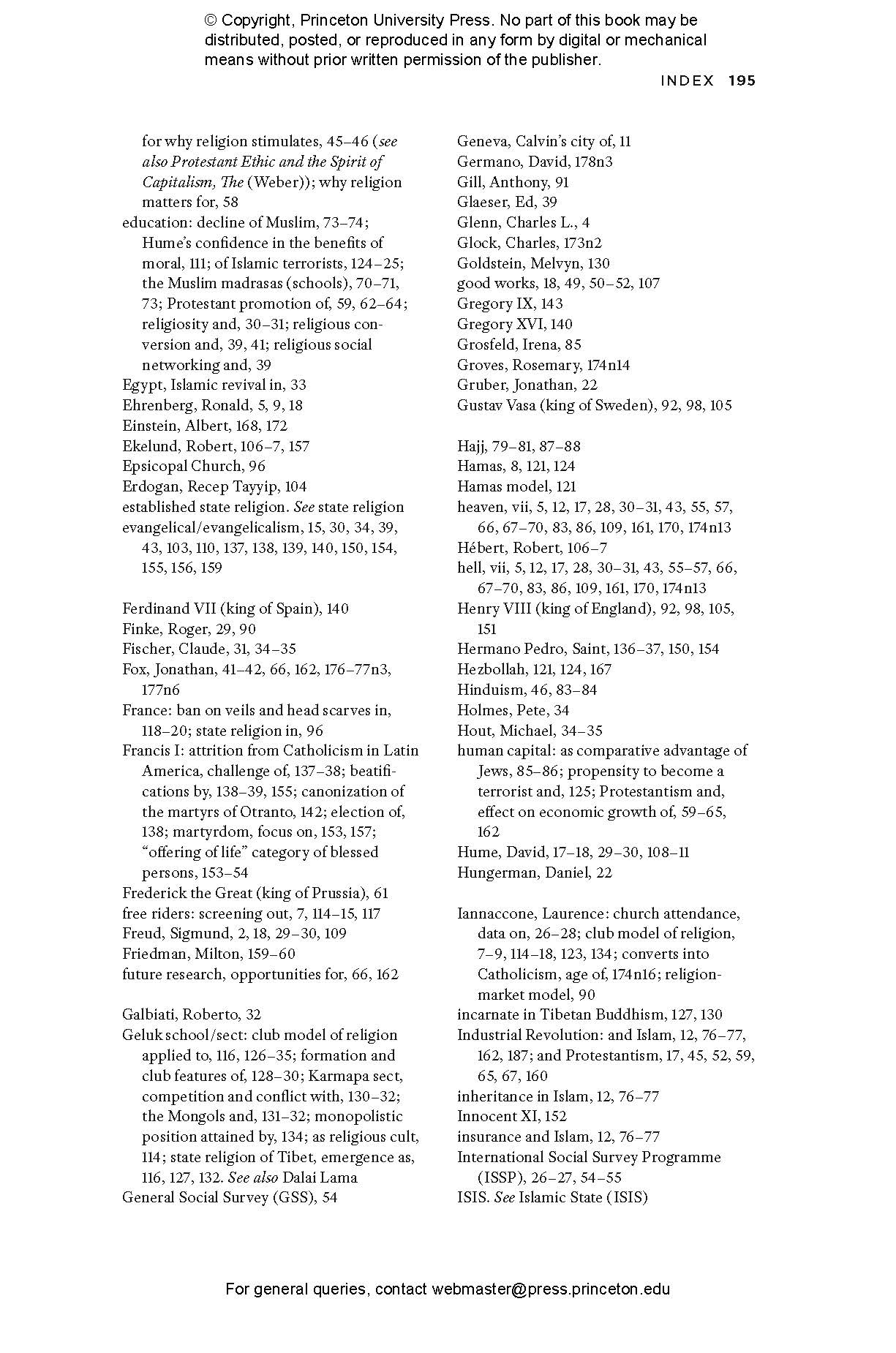 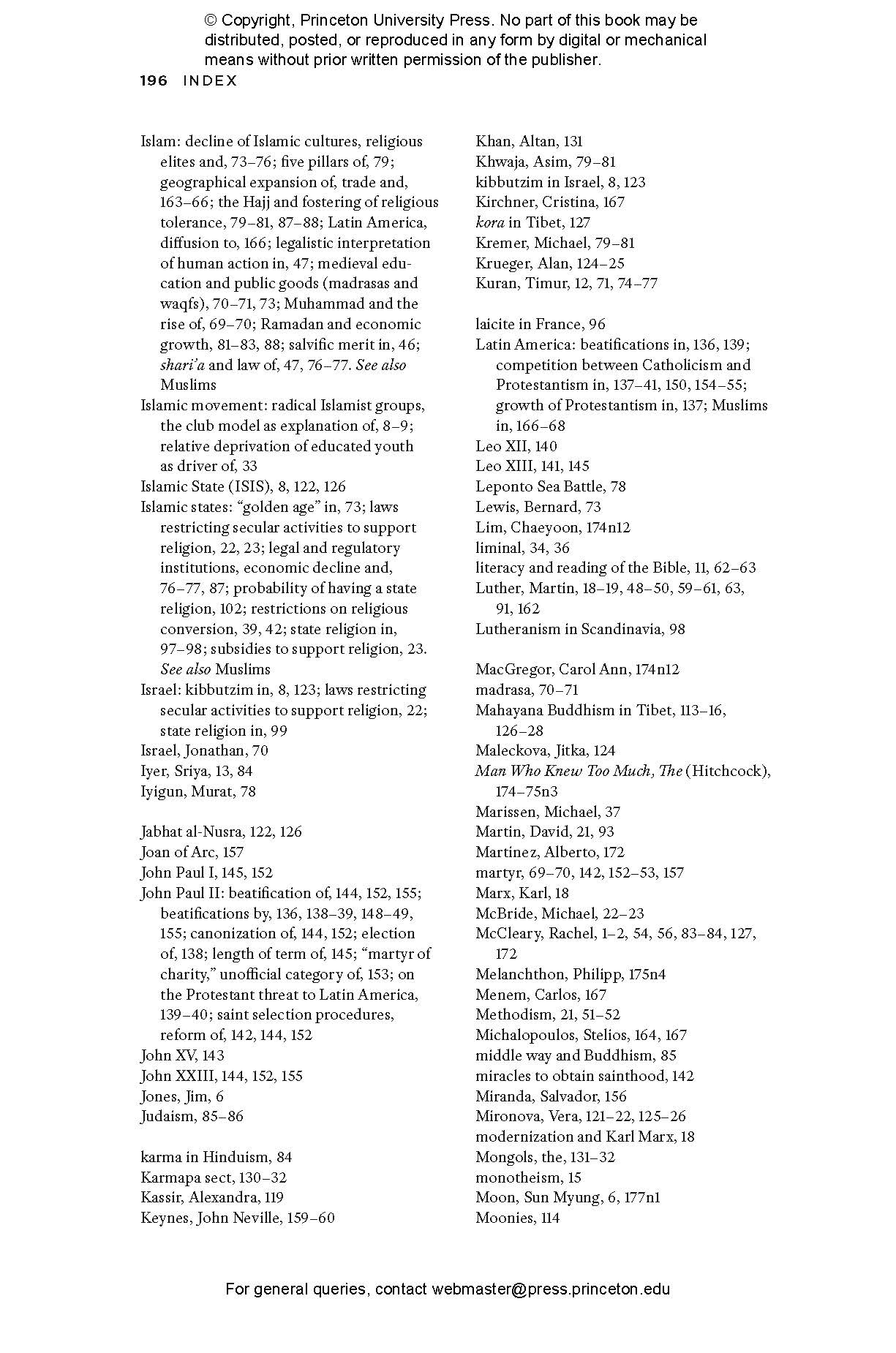 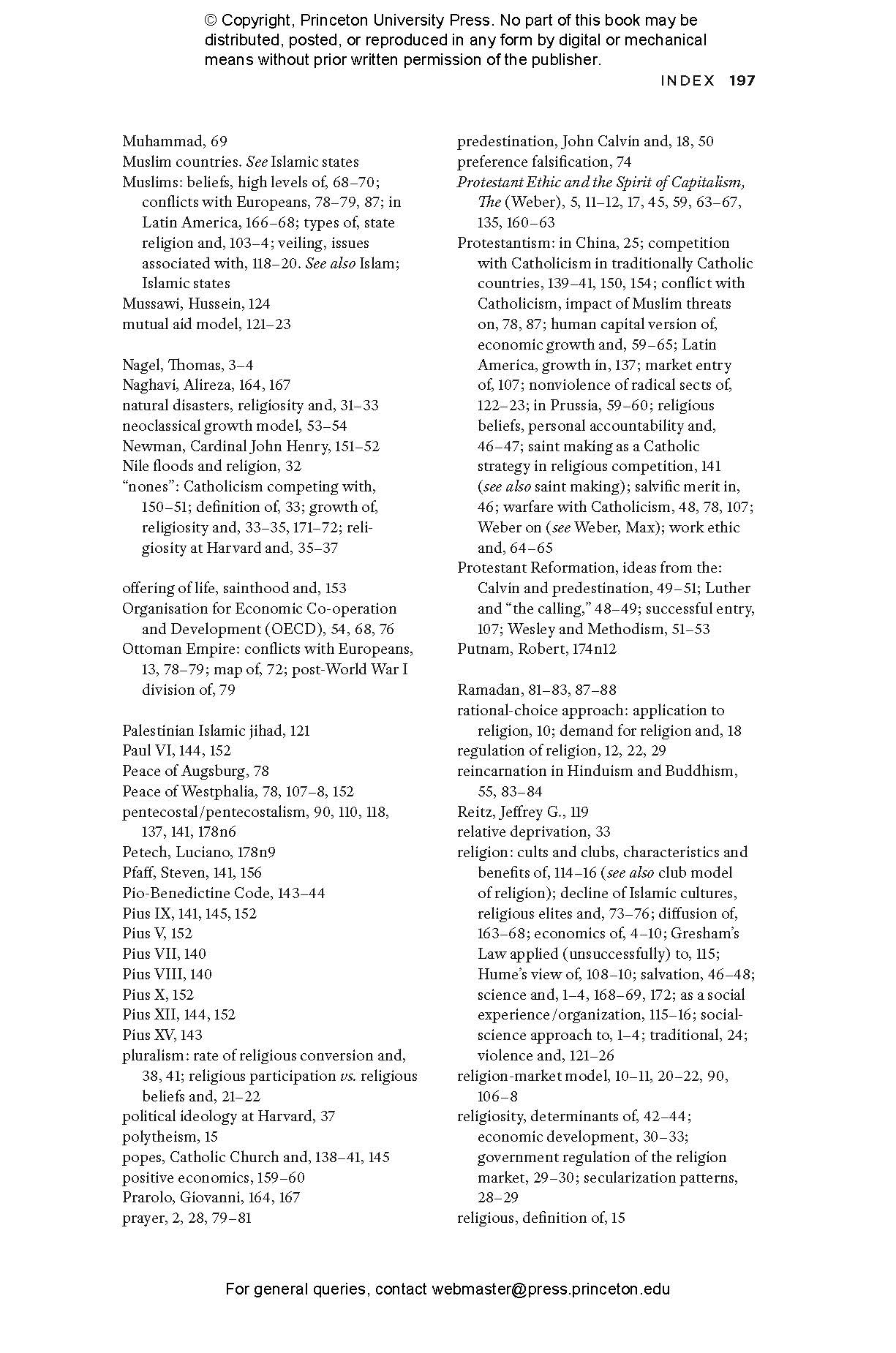 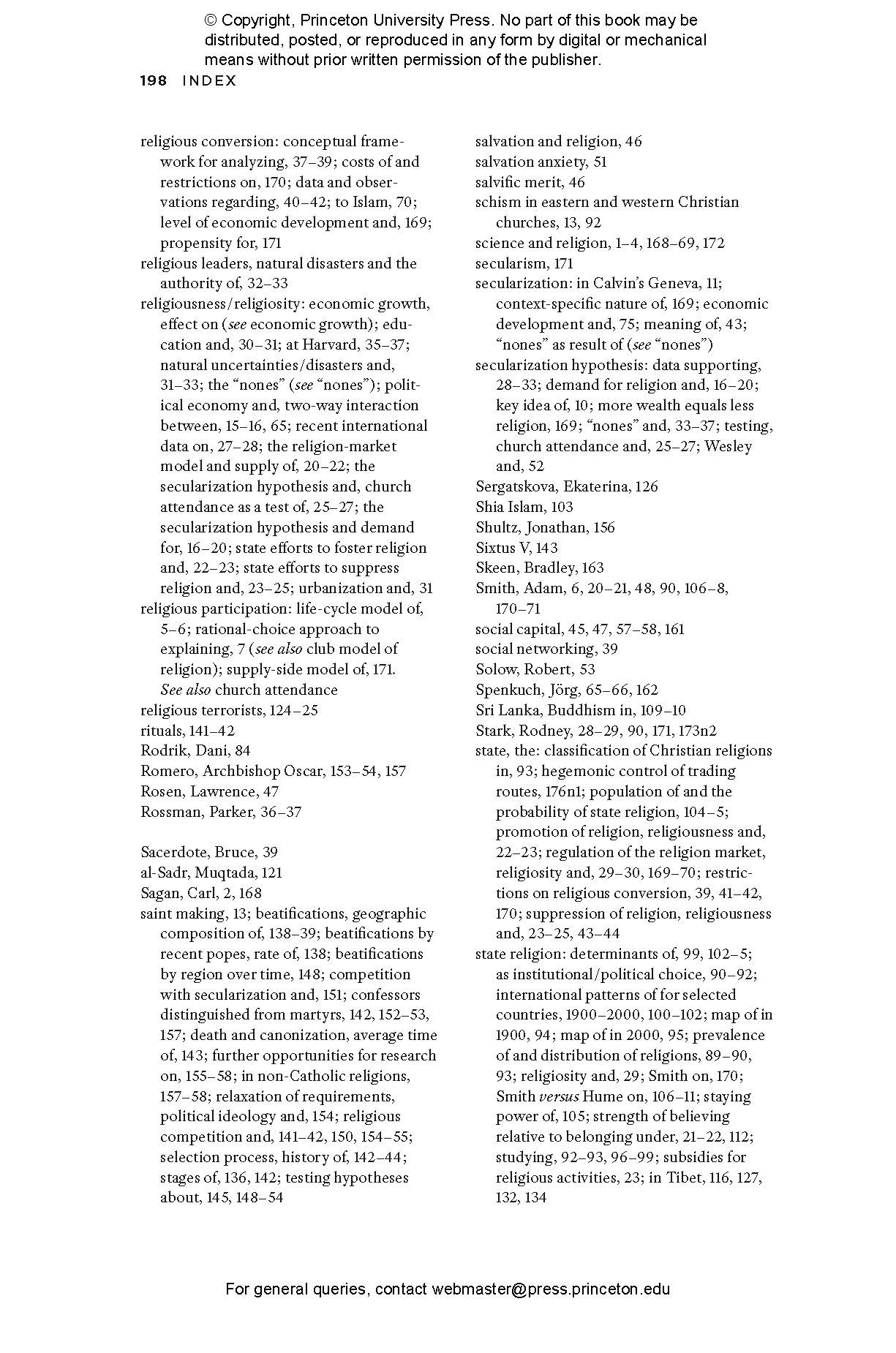 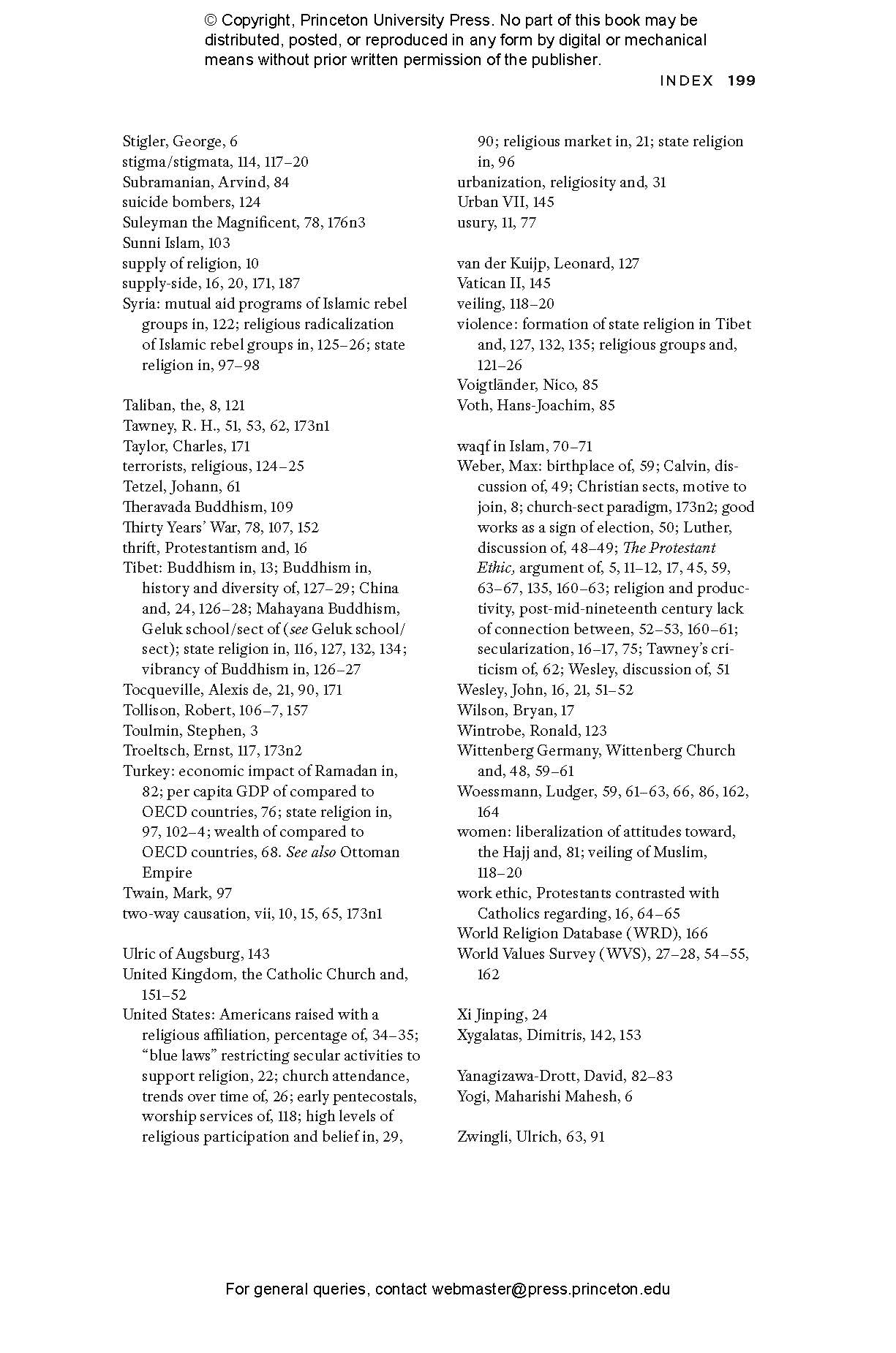 How religious beliefs and practices can influence the wealth of nations 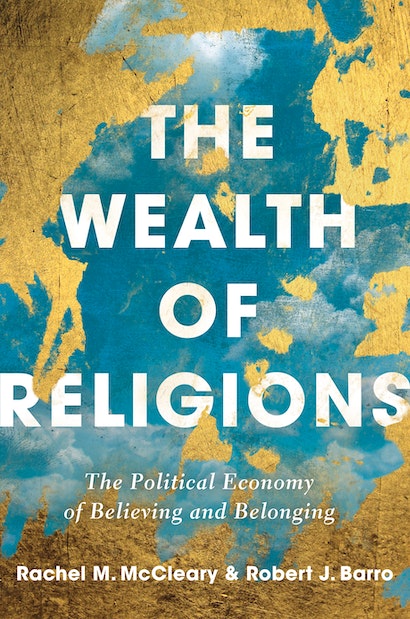 Which countries grow faster economically—those with strong beliefs in heaven and hell or those with weak beliefs in them? Does religious participation matter? Why do some countries experience secularization while others are religiously vibrant? In The Wealth of Religions, Rachel McCleary and Robert Barro draw on their long record of pioneering research to examine these and many other aspects of the economics of religion. Places with firm beliefs in heaven and hell measured relative to the time spent in religious activities tend to be more productive and experience faster growth. Going further, there are two directions of causation: religiosity influences economic performance and economic development affects religiosity. Dimensions of economic development—such as urbanization, education, health, and fertility—matter too, interacting differently with religiosity. State regulation and subsidization of religion also play a role.

The Wealth of Religions addresses the effects of religious beliefs on character traits such as work ethic, thrift, and honesty; the Protestant Reformation and its long-term effects on education and religious competition; Communism’s suppression of and competition with religion; the effects of Islamic laws and regulations on the functioning of markets and, hence, on the long-term development of Muslim countries; why some countries have state religions; analogies between religious groups and terrorist organizations; the violent origins of the Dalai Lama’s brand of Tibetan Buddhism; and the use by the Catholic Church of saint-making as a way to compete against the rise of Protestant Evangelicals.

Timely and incisive, The Wealth of Religions provides fresh insights into the vital interplay between religion, markets, and economic development. 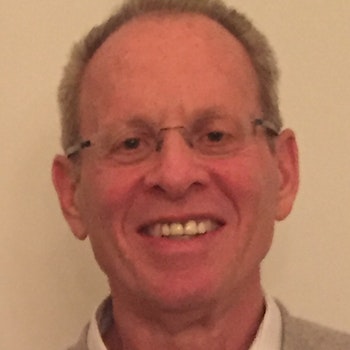 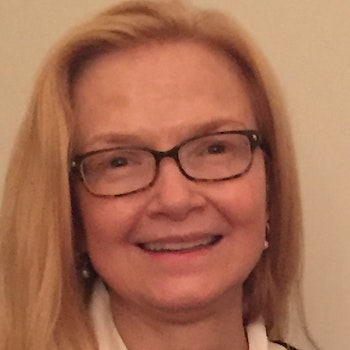 "McCleary and Barro take an interdisciplinary approach, combining economics, sociology, anthropology, history, geography, theology, and philosophy; their observations are backed by large inputs of data . . . . The Wealth of Religions suggests that there are many more insights to be gained by incorporating religion into the forces of economics."—Peter Day, Church Times

"It might seem incongruous, but applying the principles of economics to the realm of religious faith and observance leads to some fascinating insights. Reviving questions first raised by Max Weber and others over a century ago, Rachel McCleary and Robert Barro ask if there is, after all, a Protestant ethic related to the spirit of capitalism. What have been the economic consequences of the spread of Islam? Is secularization an irresistible consequence of rising incomes? The answers presented here to these and other questions would have delighted the late David Landes, whose Wealth and Poverty of Nations did so much to revive scholarly interest in the economic history of religion."—Niall Ferguson, Milbank Family Senior Fellow, the Hoover Institution, Stanford, and author of The Ascent of Money and The Square and the Tower

"The interplay between religion and economics involves various mechanisms, some of which operate at cross-purposes. In this enlightening and entertaining book, Rachel McCleary and Robert Barro provide a sweeping survey of the most penetrating scholarship on this topic, including their own pioneering contributions spanning decades. The Wealth of Religions will appeal to a wide range of scholars, but also to the broader public interested in the social impact of the world's major religions."—Timur Kuran, Duke University

"This truly impressive book demonstrates how religion and the wealth of nations are intimately linked. Rachel McCleary and Robert Barro present pathbreaking empirical research in a way that makes for an enjoyable read. A must-read for everyone with an interest in the role of religion in society in past and present."—Sascha O. Becker, University of Warwick

"McCleary and Barro provide a wonderful introduction to the economics of religion in this engaging and accessible book. Bringing together years of pathbreaking research, The Wealth of Religions is a must-read for anyone interested in the economic approach to religion or the economic impact of religious behavior and institutions."—Jared Rubin, Chapman University, author of Rulers, Religion, and Riches: Why the West Got Rich and the Middle East Did Not

"How does believing in god or an afterlife affect human behavior and economic growth? And how are religious beliefs shaped by socioeconomic circumstances and government regulations? In this fascinating book, McCleary and Barro convincingly show how economic concepts can be fruitfully applied to improve our understanding of the role of religion in society worldwide."—Ludger Woessmann, University of Munich