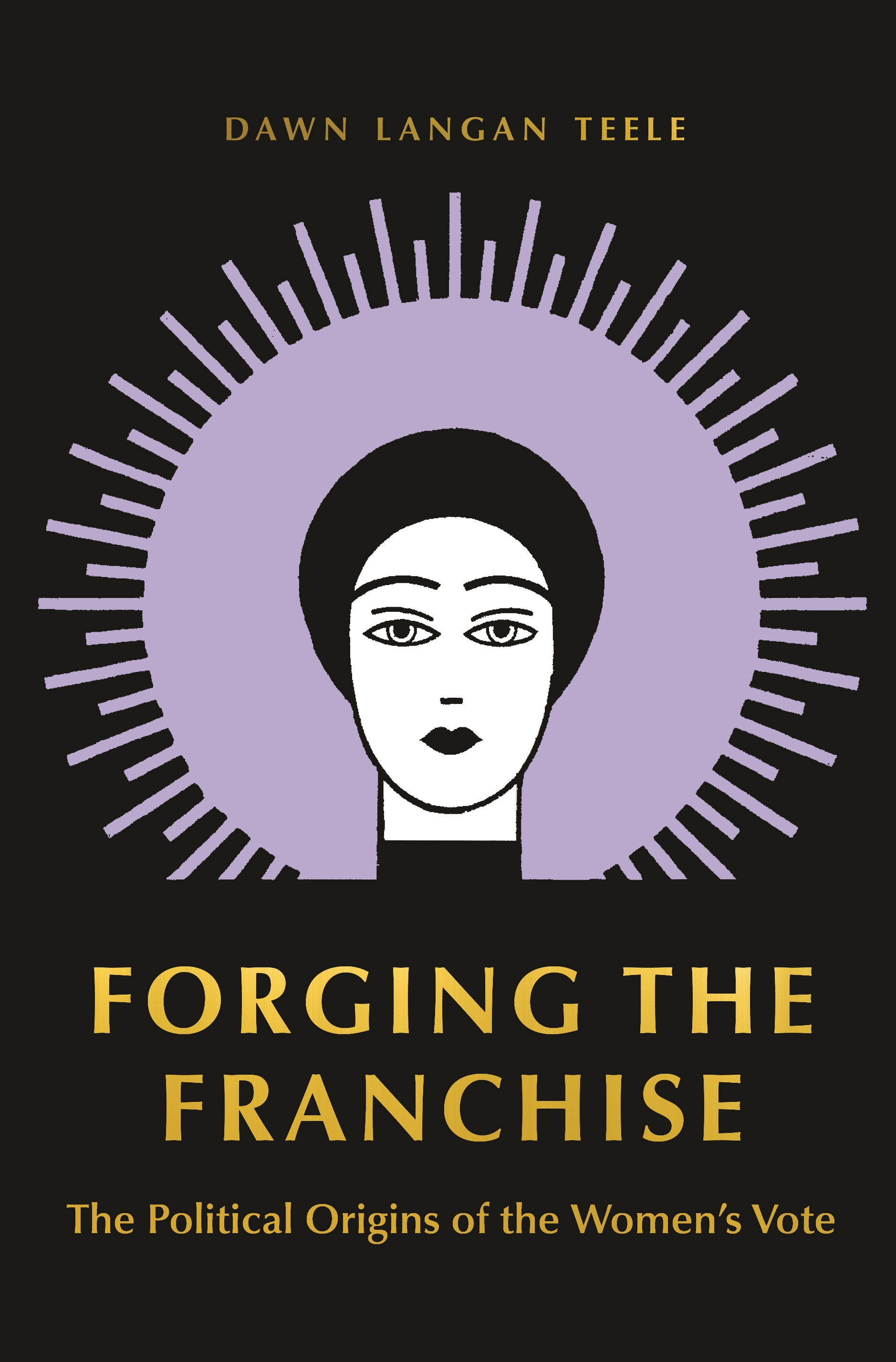 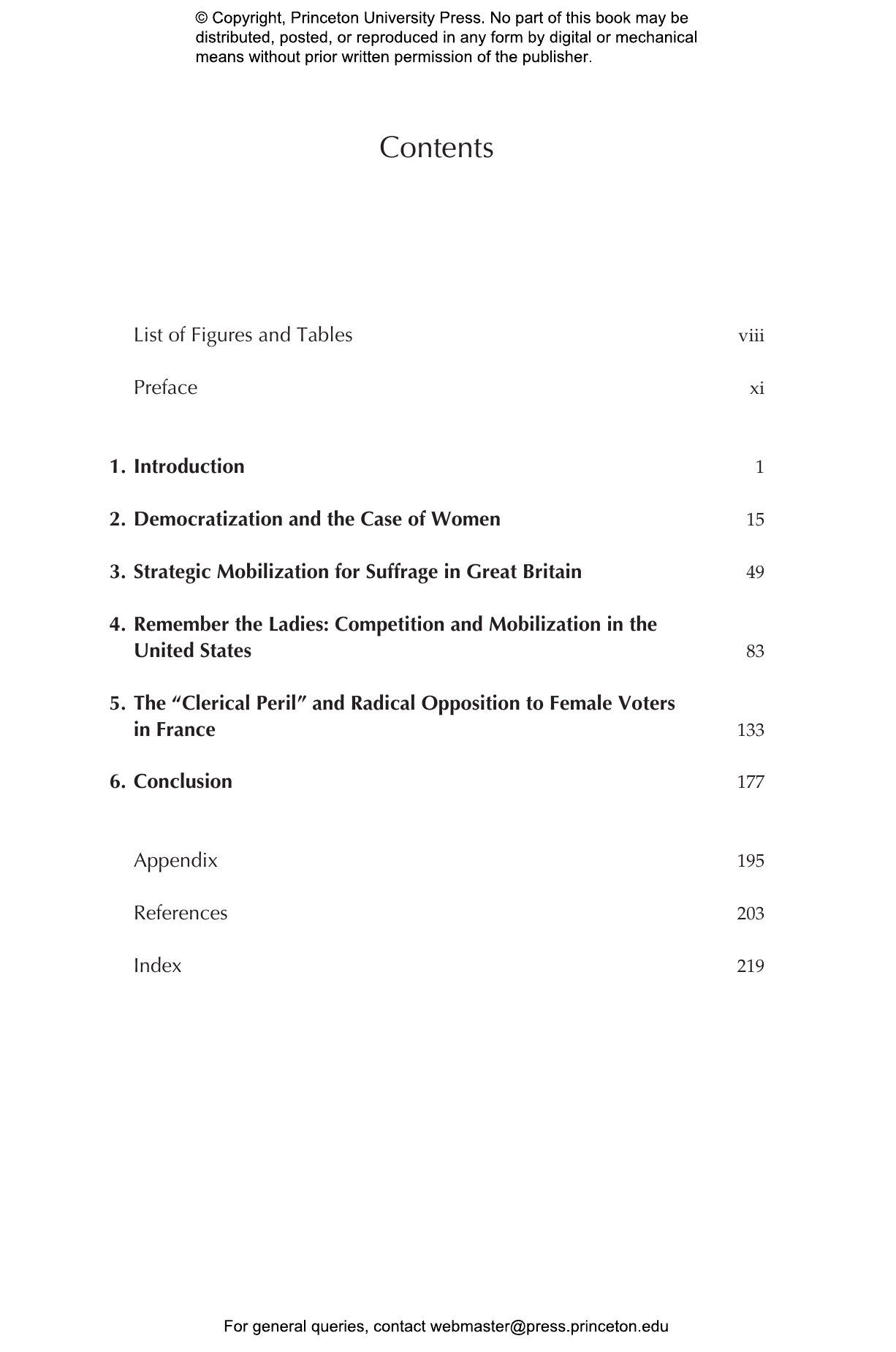 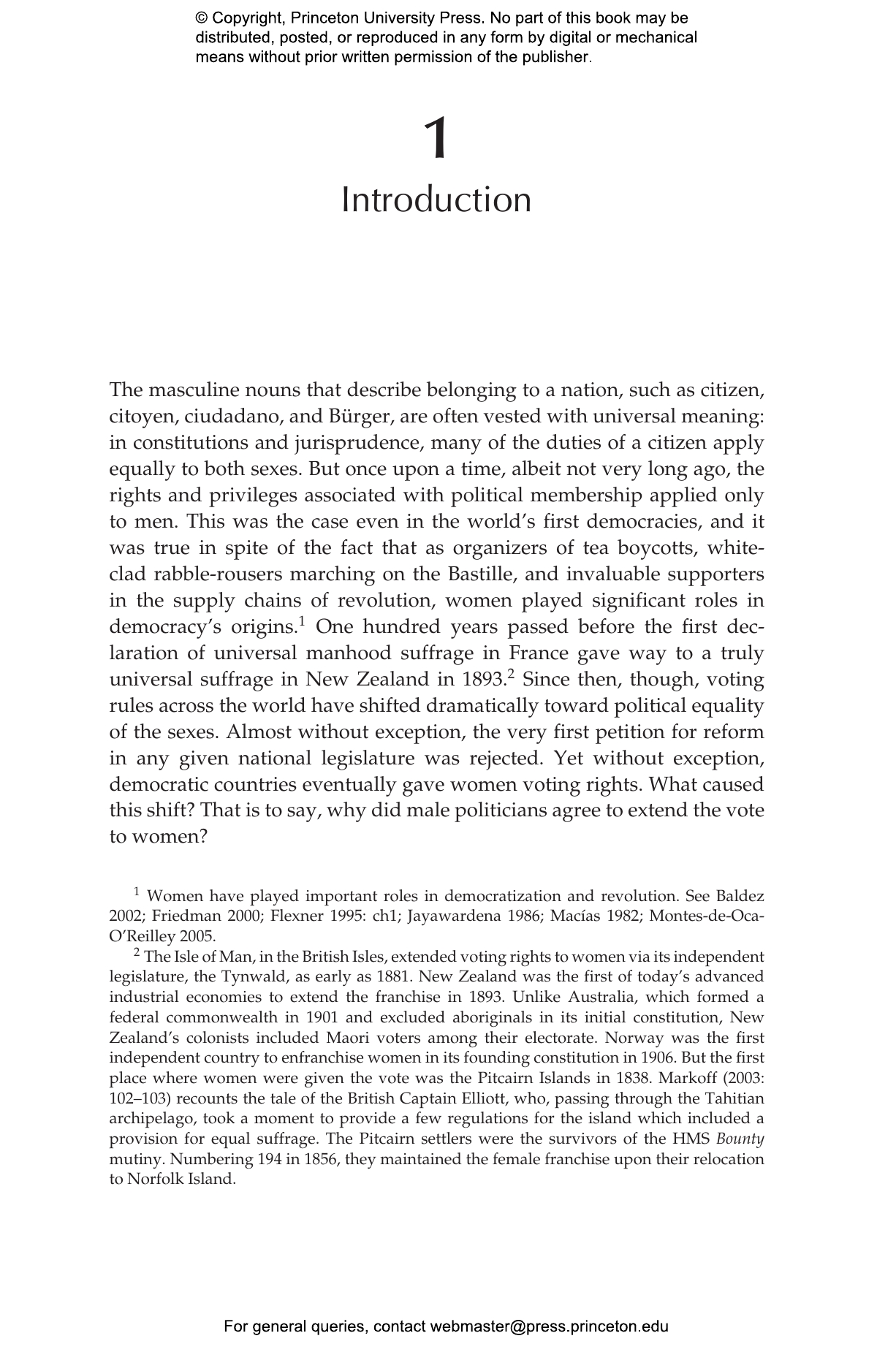 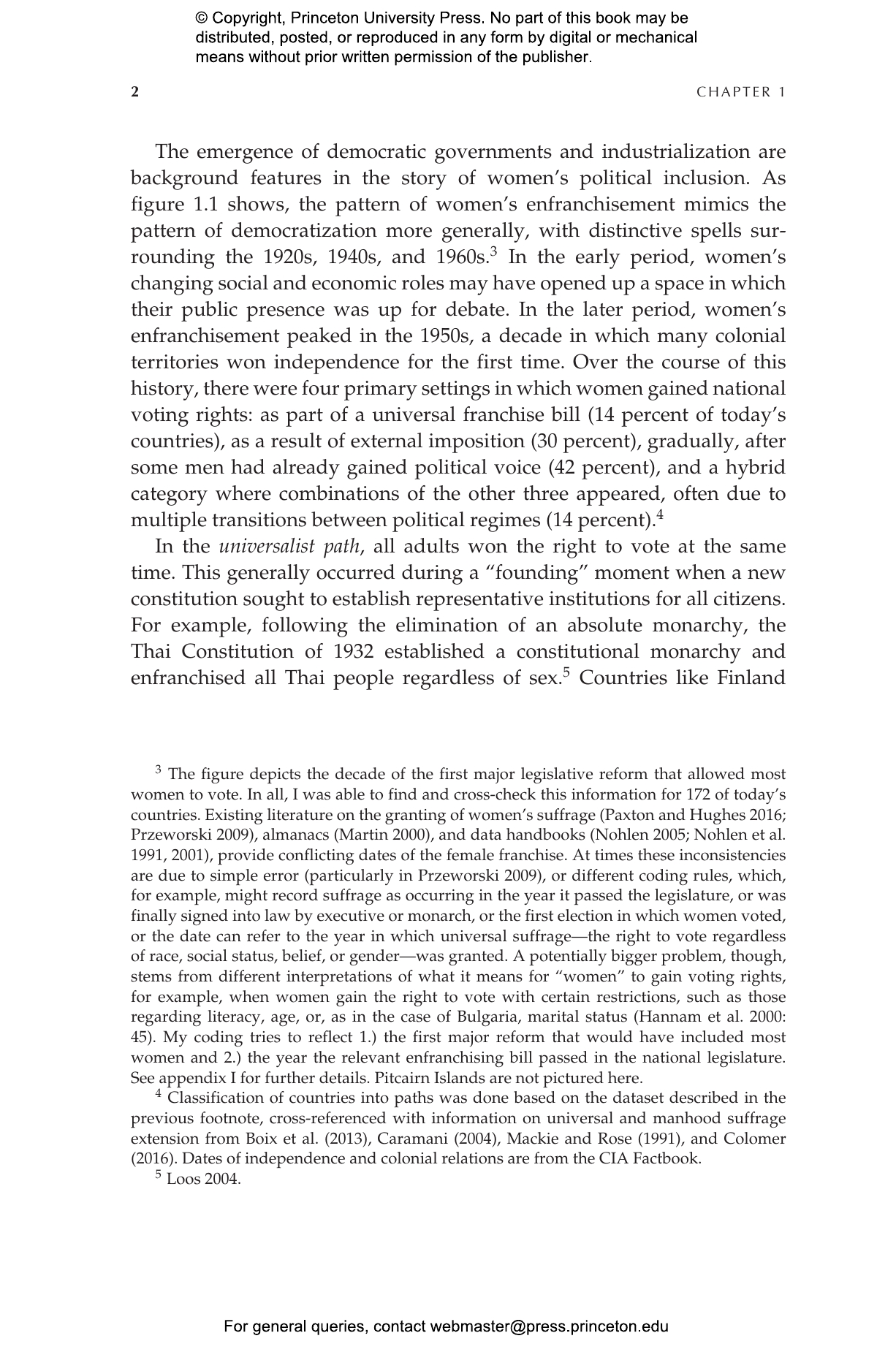 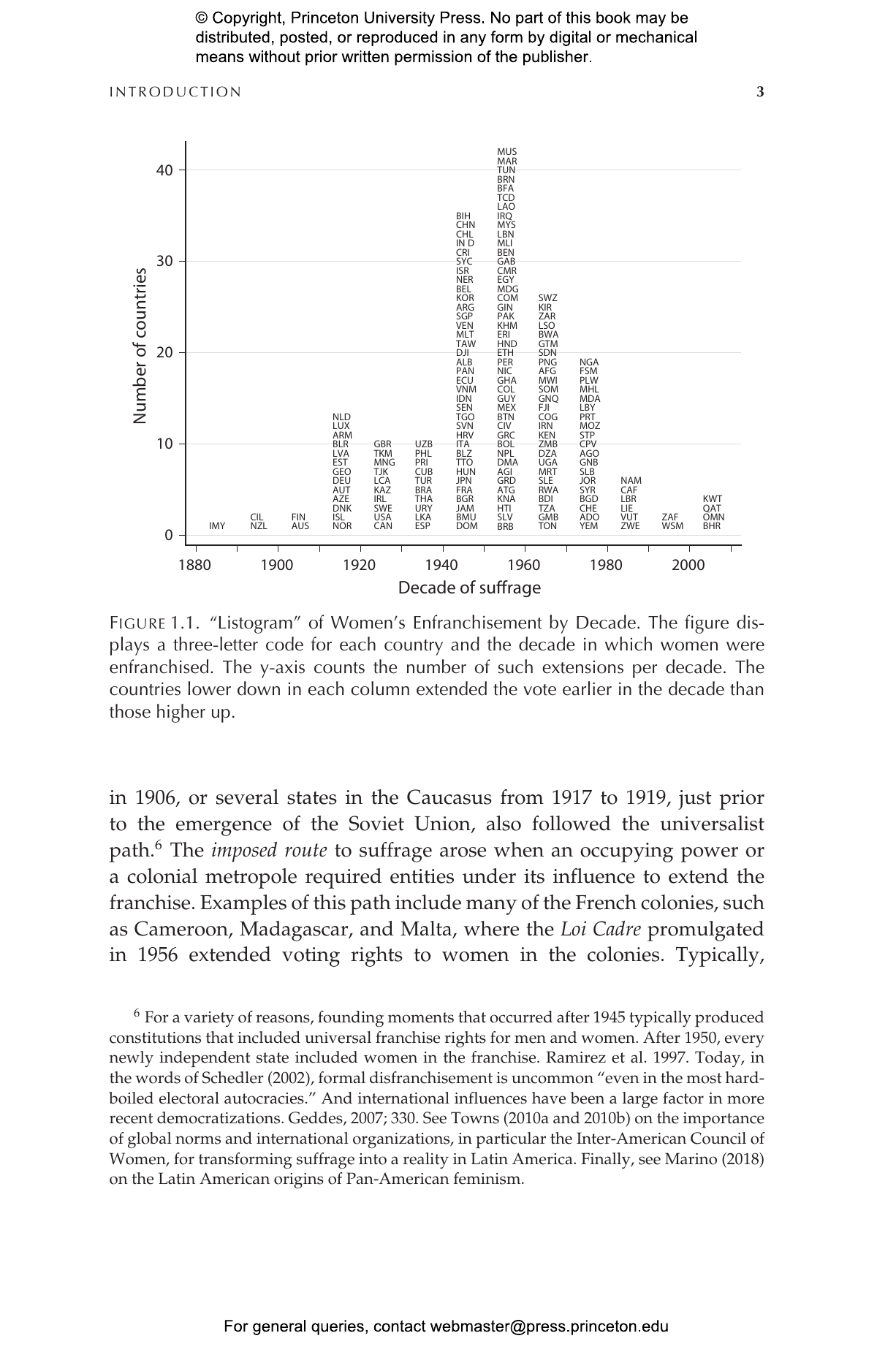 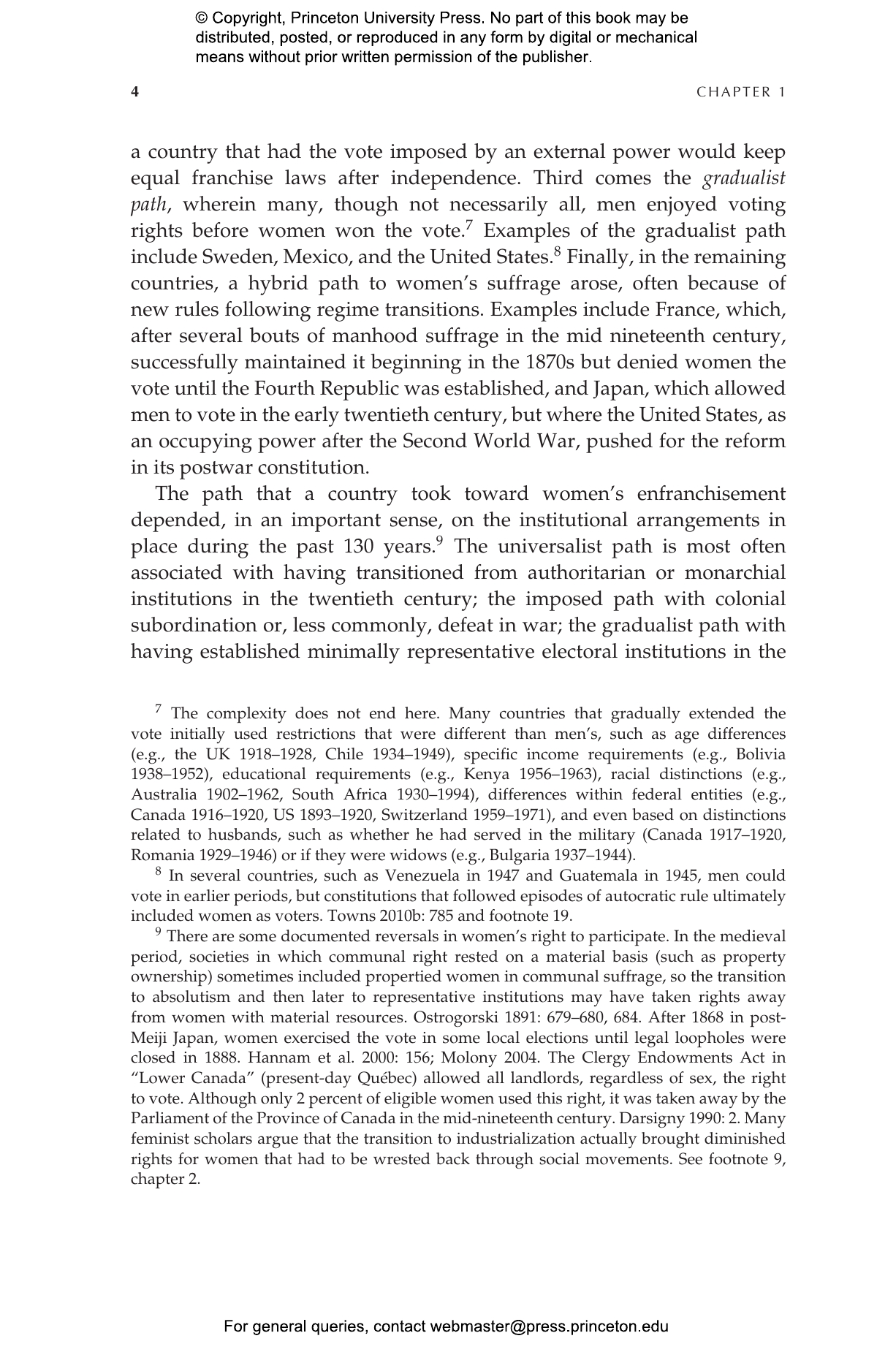 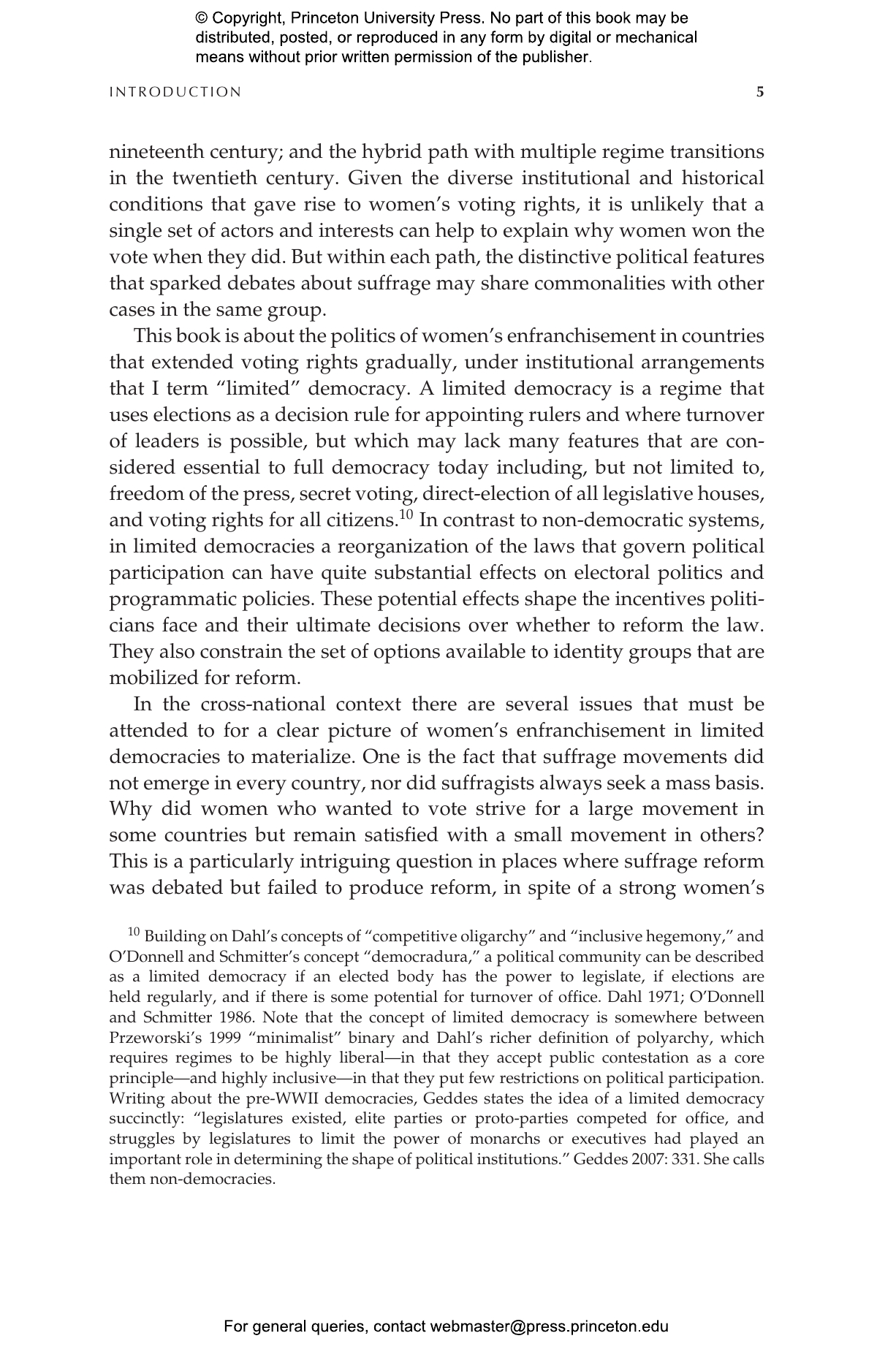 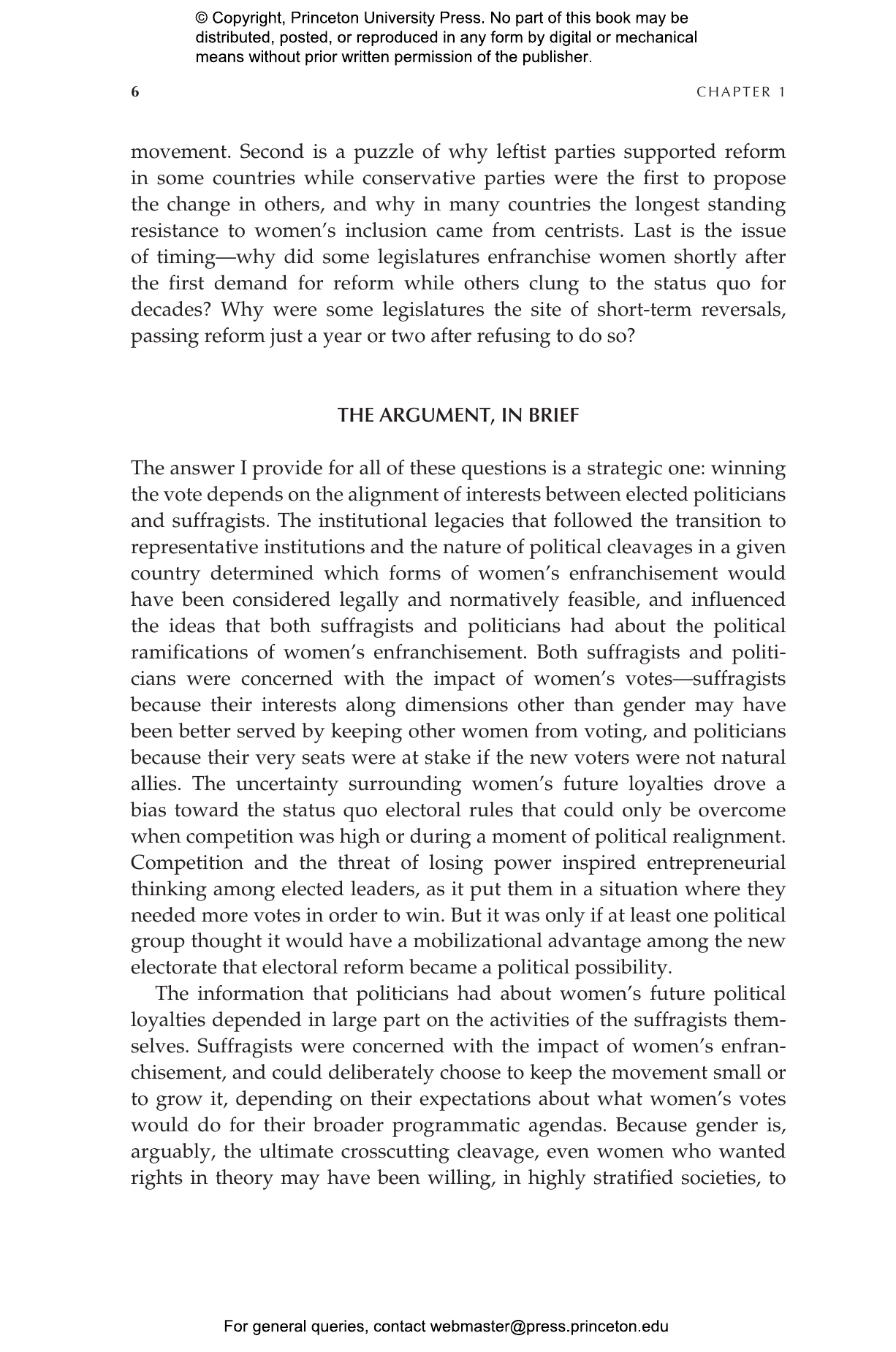 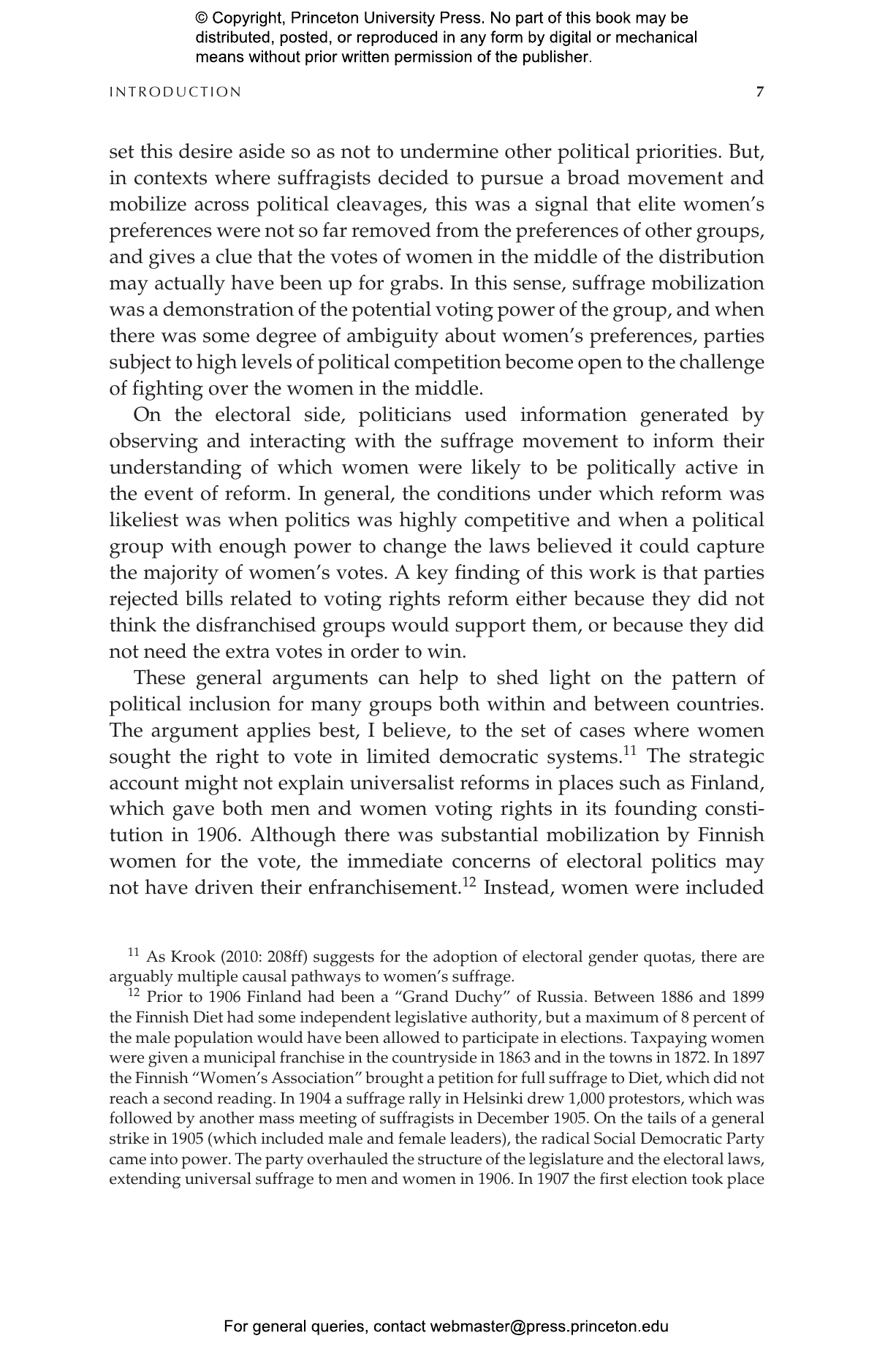 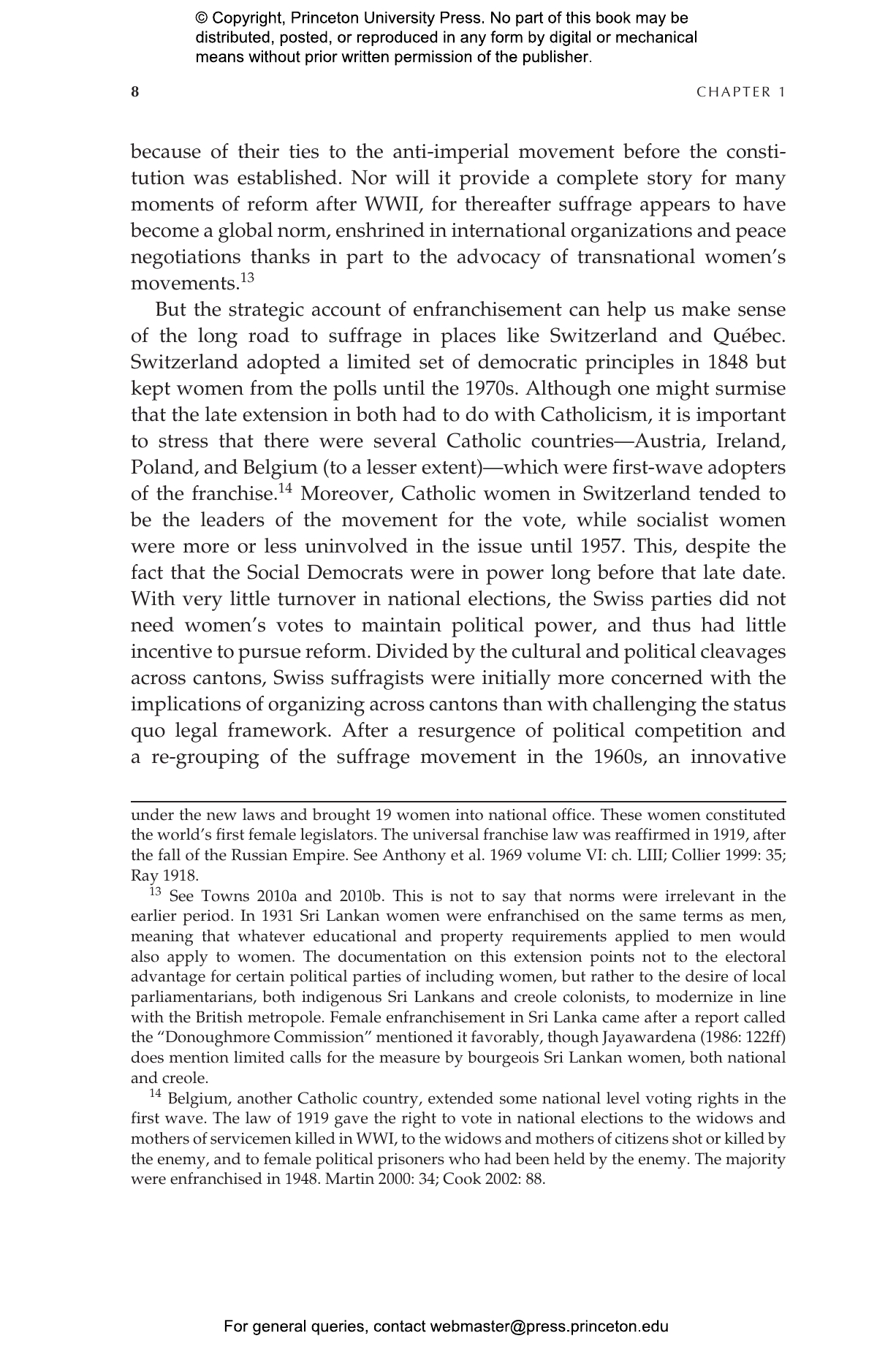 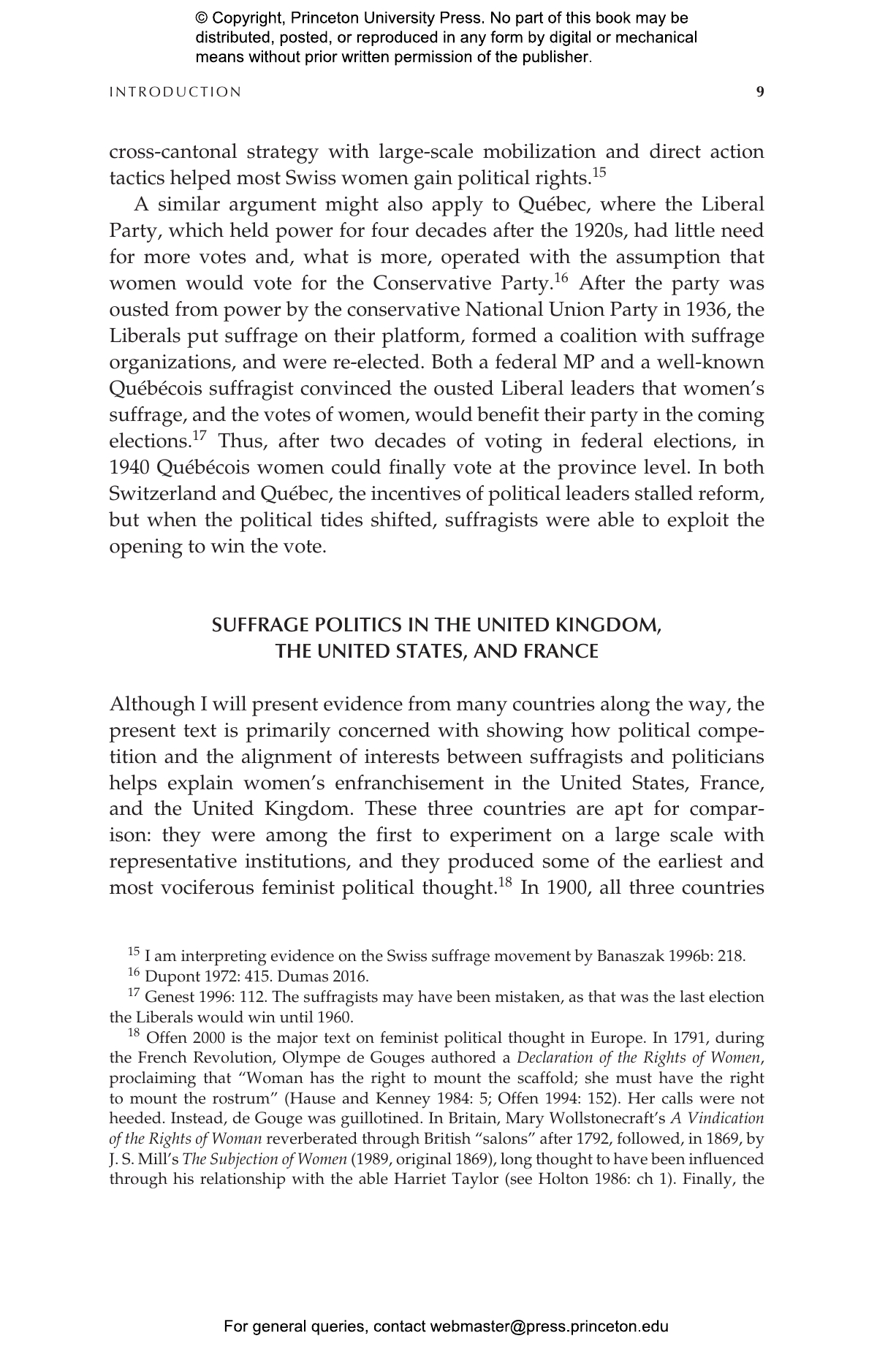 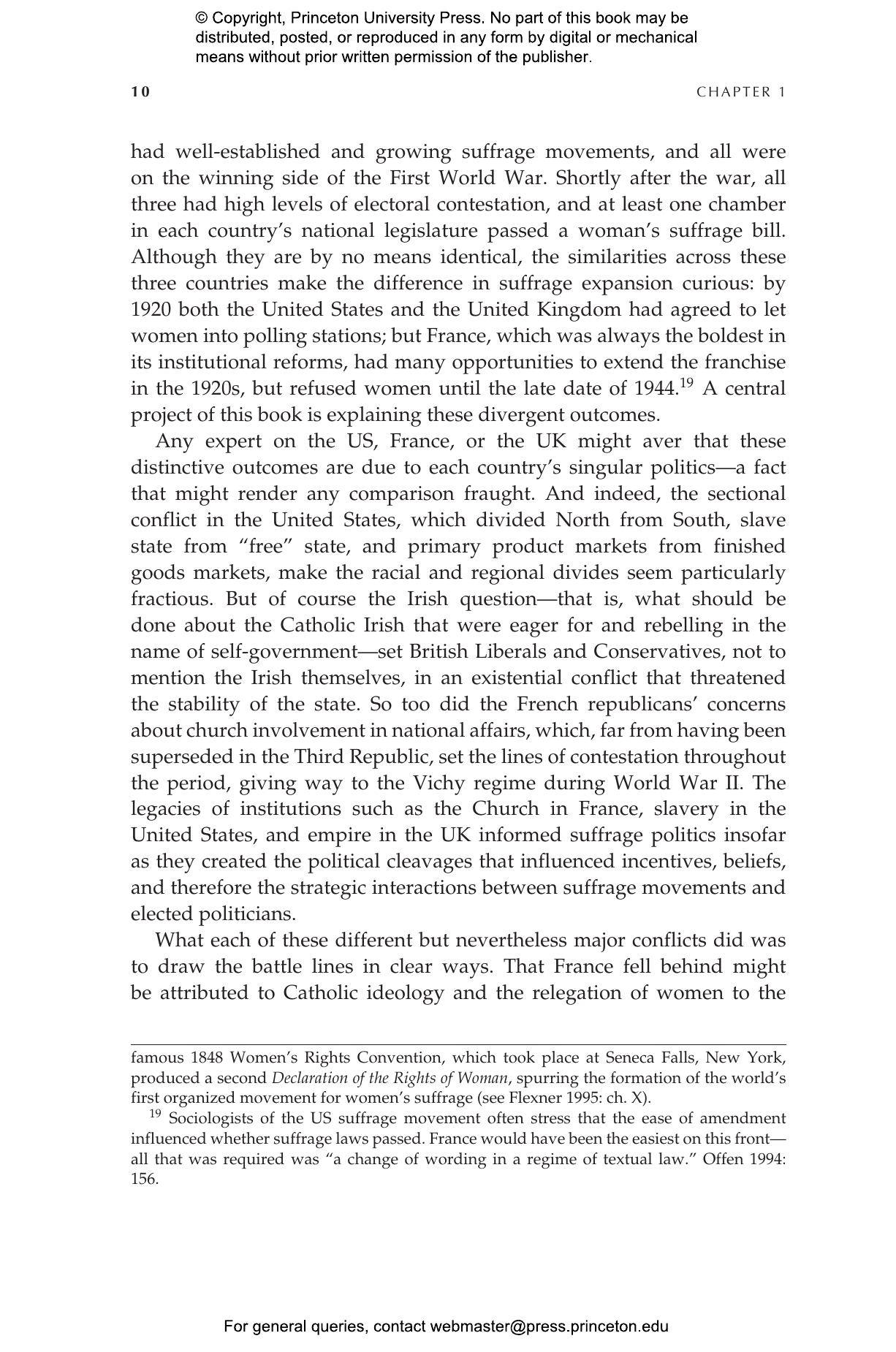 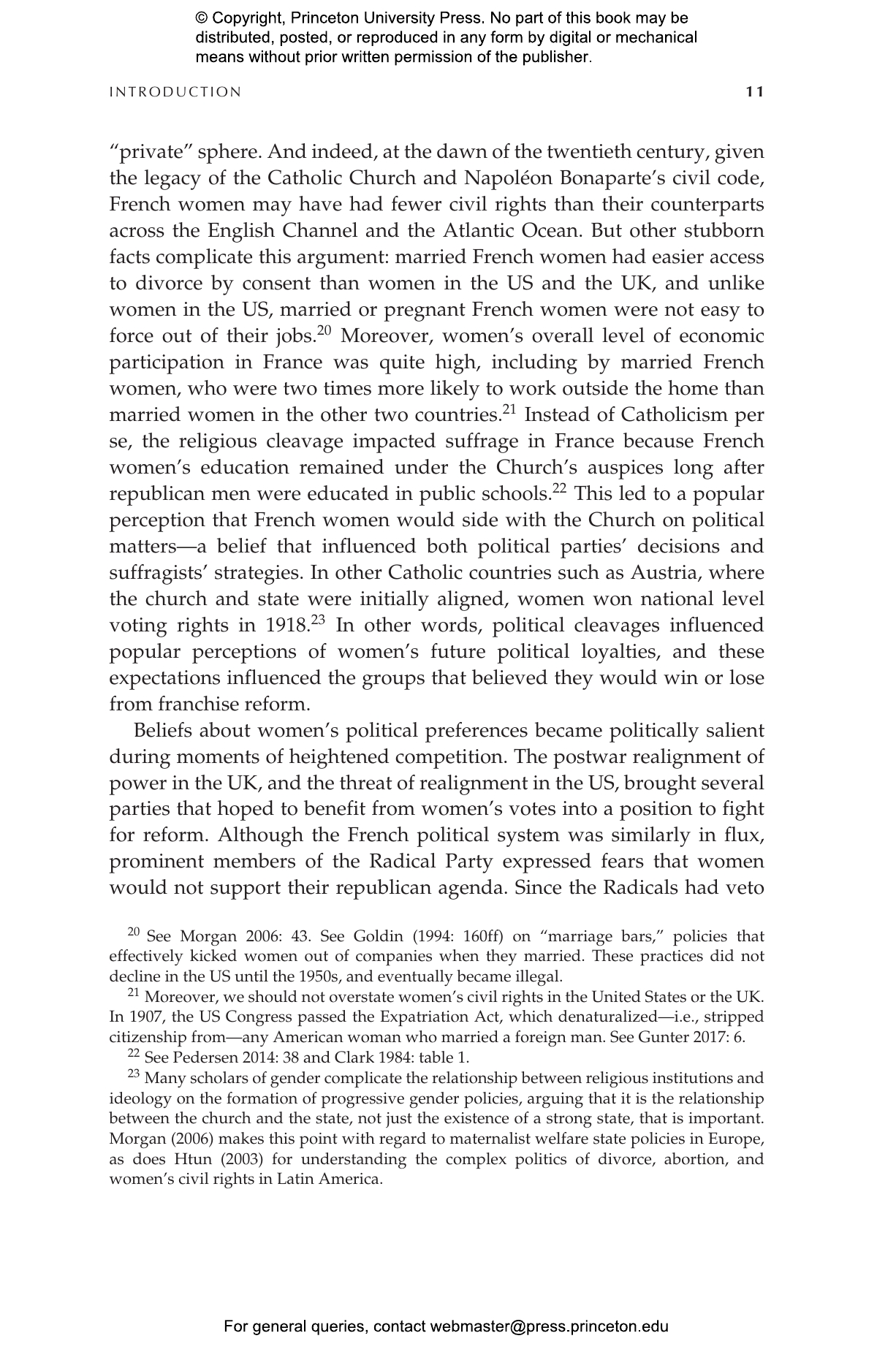 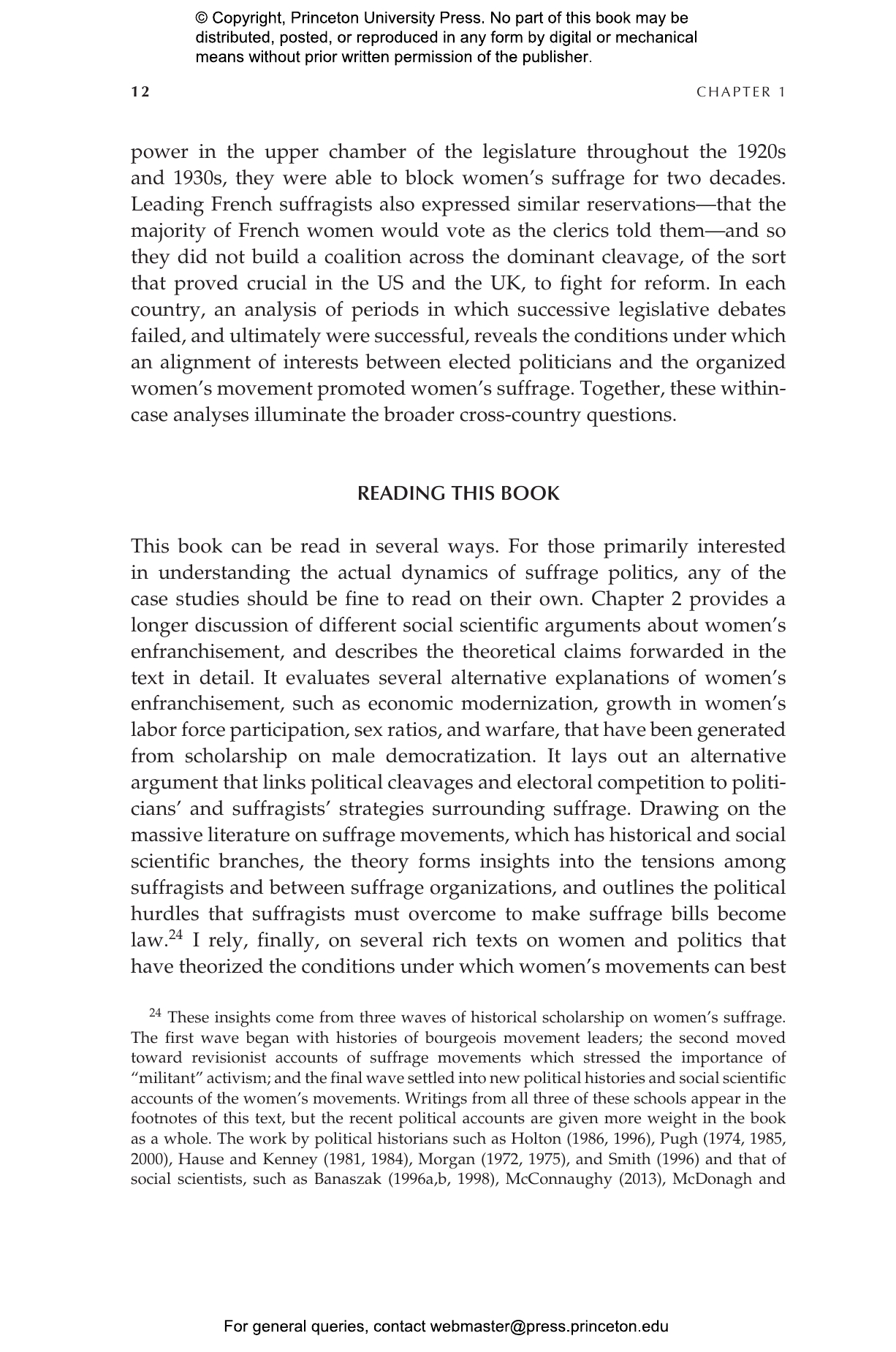 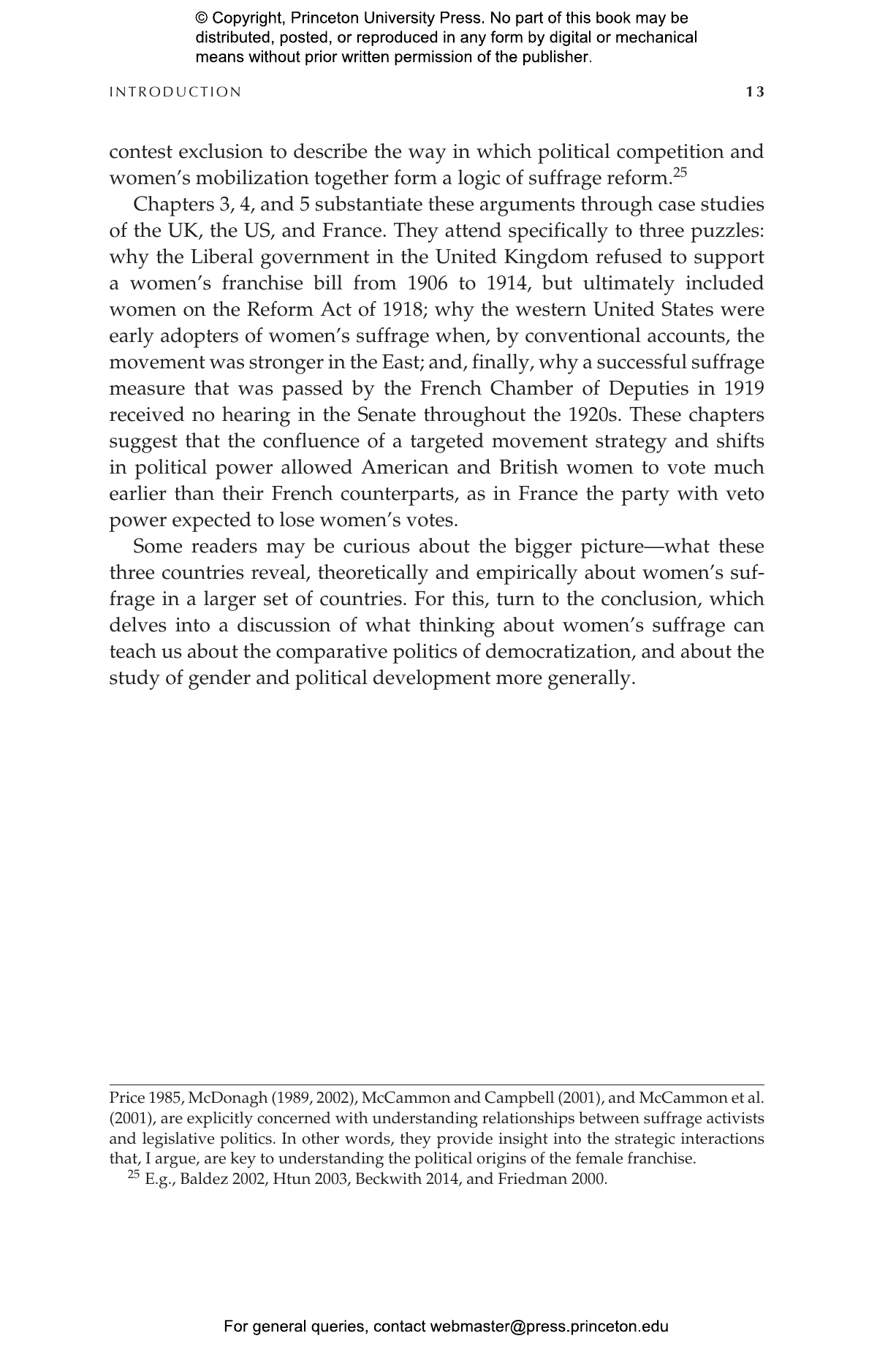 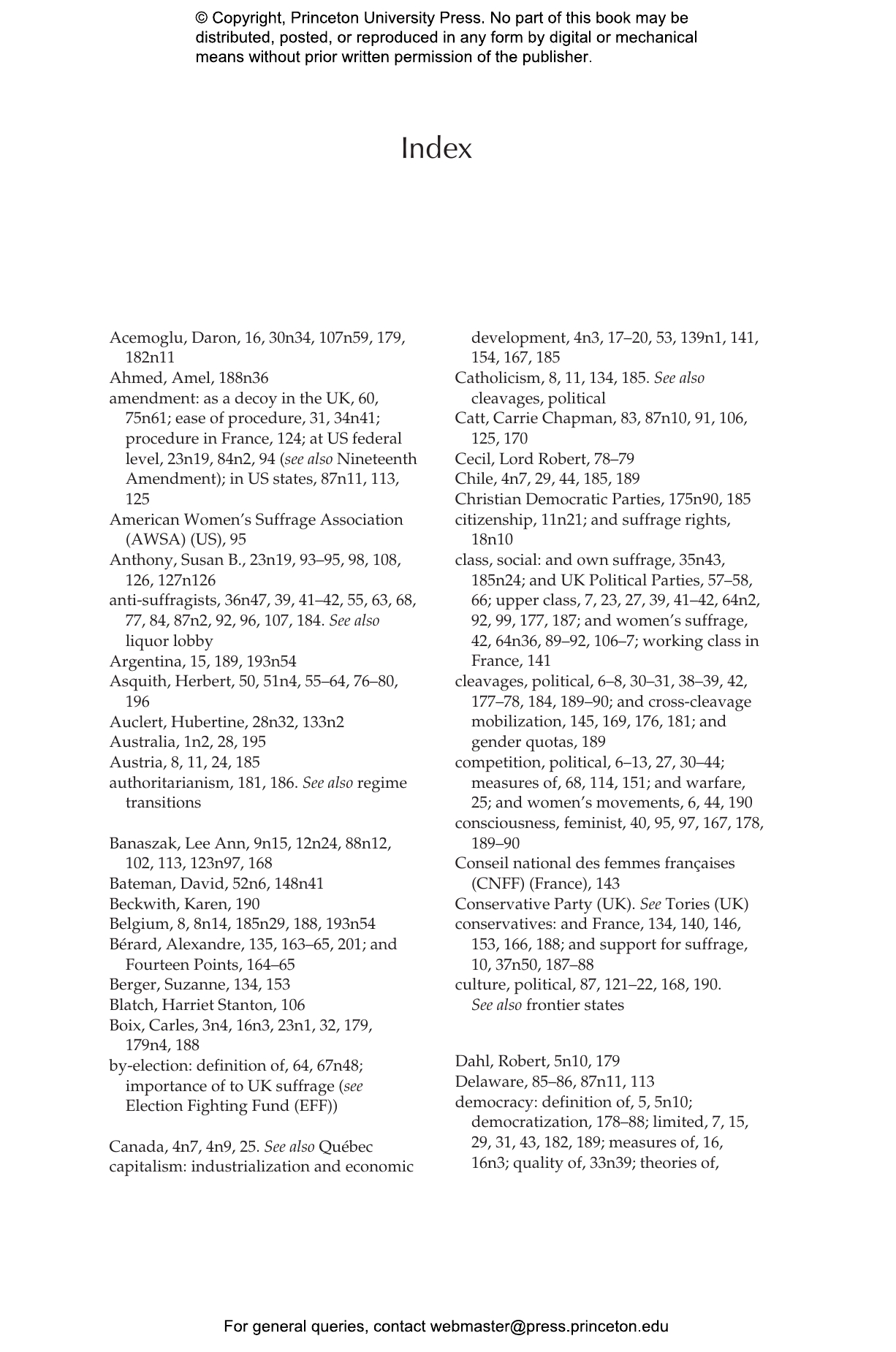 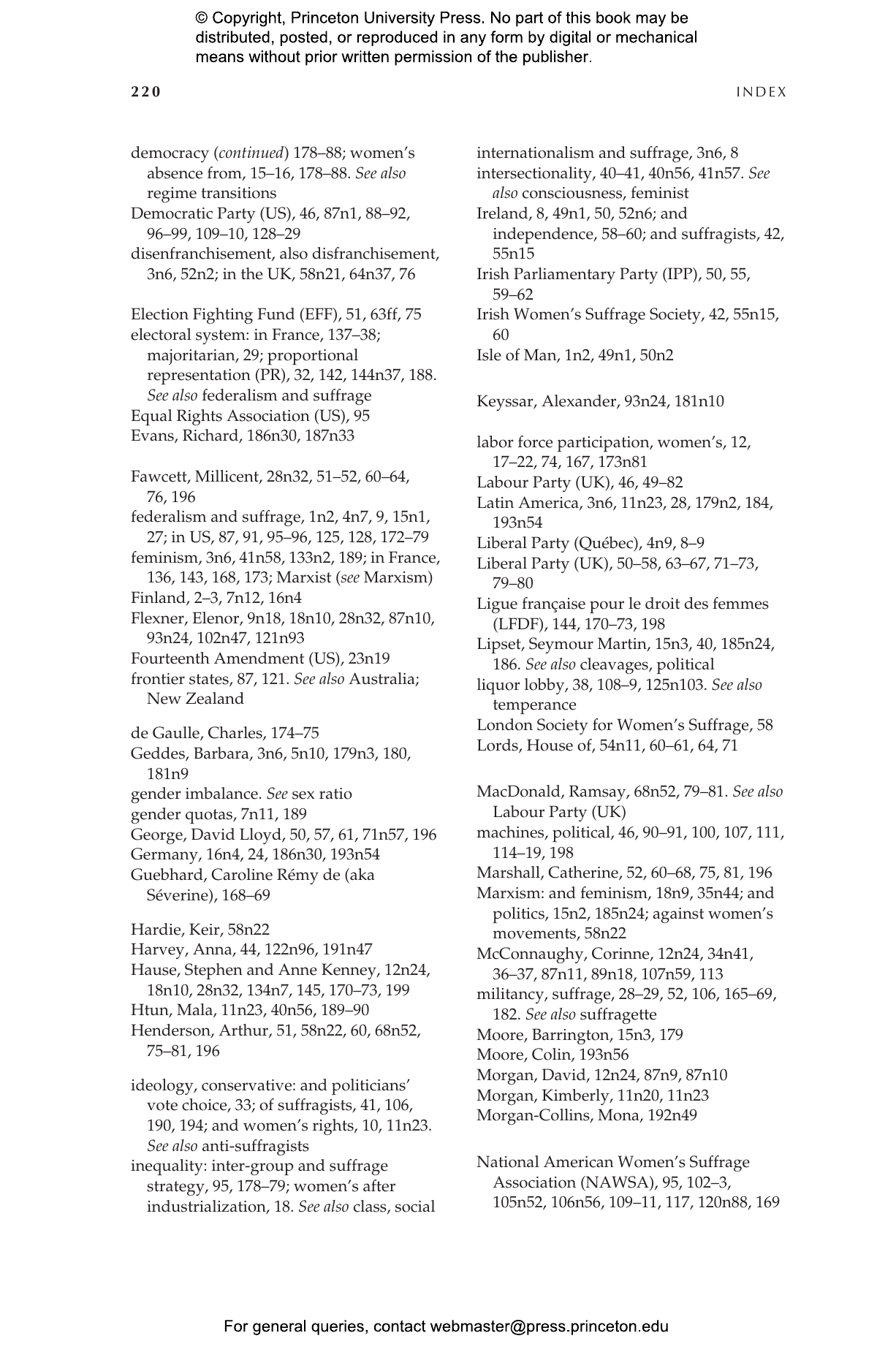 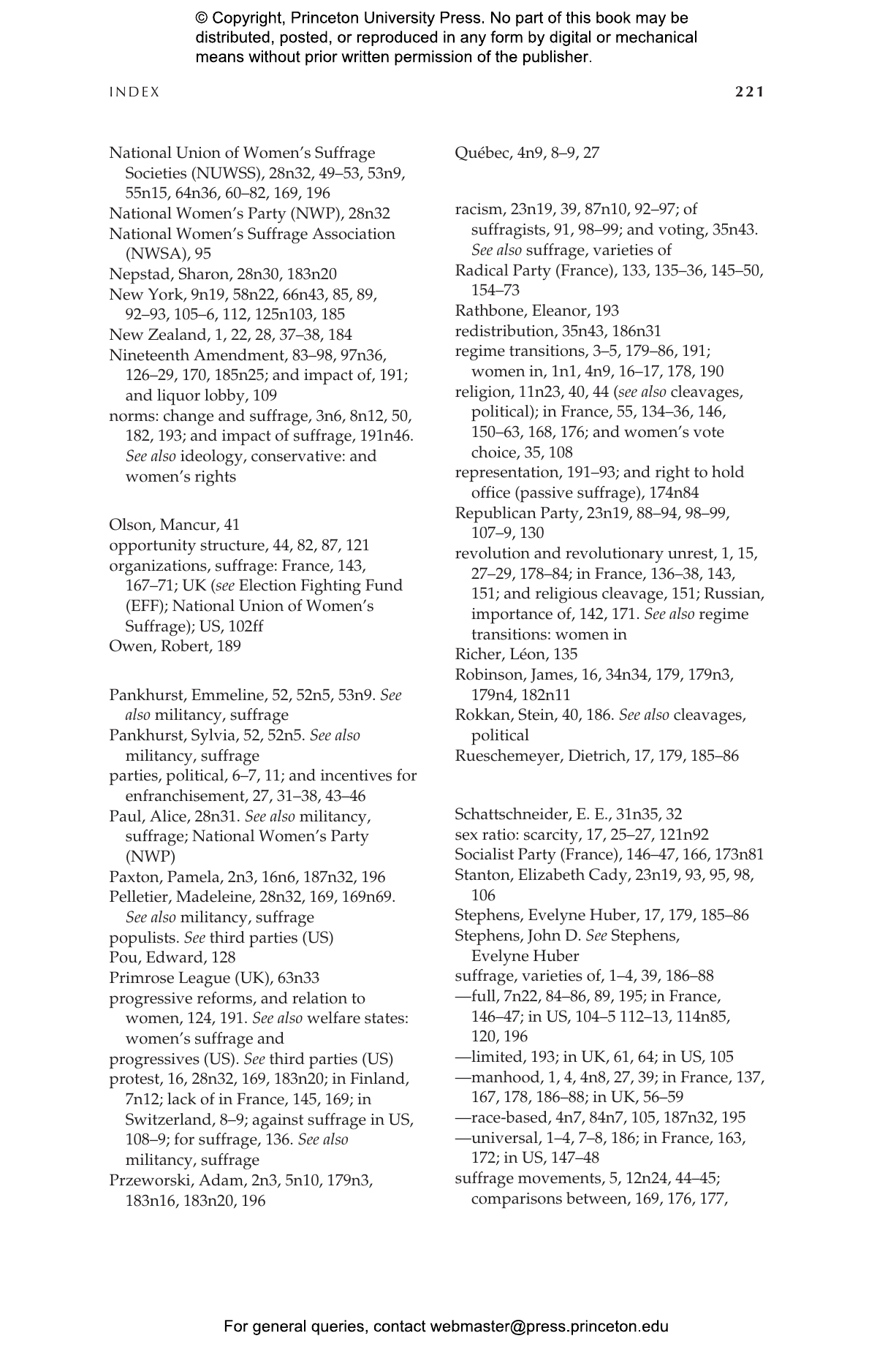 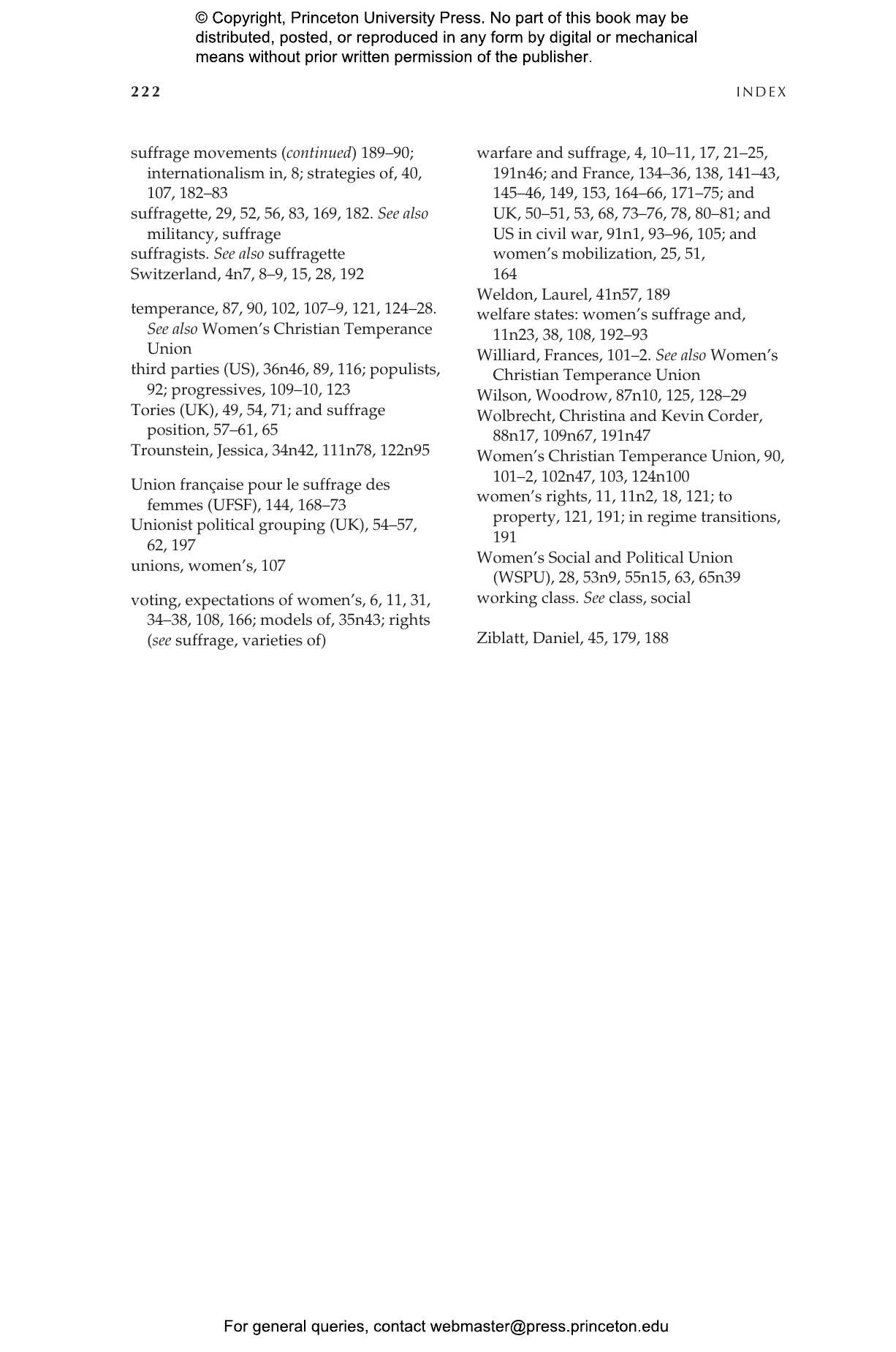 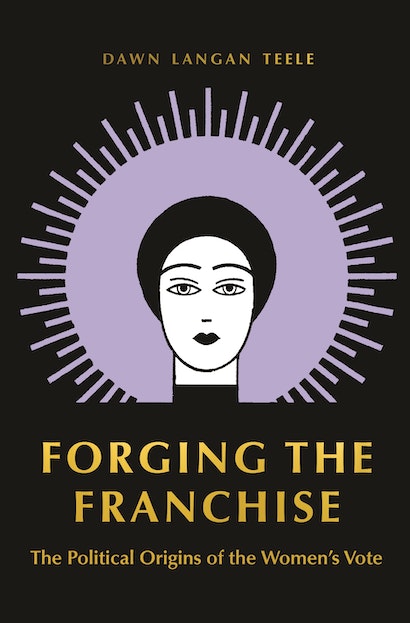 In the 1880s, women were barred from voting in all national-level elections, but by 1920 they were going to the polls in nearly thirty countries. What caused this massive change? Why did male politicians agree to extend voting rights to women? Contrary to conventional wisdom, it was not because of progressive ideas about women or suffragists’ pluck. In most countries, elected politicians fiercely resisted enfranchising women, preferring to extend such rights only when it seemed electorally prudent and in fact necessary to do so. Through a careful examination of the tumultuous path to women’s political inclusion in the United States, France, and the United Kingdom, Forging the Franchise demonstrates that the formation of a broad movement across social divides, and strategic alliances with political parties in competitive electoral conditions, provided the leverage that ultimately transformed women into voters.

As Dawn Teele shows, in competitive environments, politicians had incentives to seek out new sources of electoral influence. A broad-based suffrage movement could reinforce those incentives by providing information about women’s preferences, and an infrastructure with which to mobilize future female voters. At the same time that politicians wanted to enfranchise women who were likely to support their party, suffragists also wanted to enfranchise women whose political preferences were similar to theirs. In contexts where political rifts were too deep, suffragists who were in favor of the vote in principle mobilized against their own political emancipation.

Exploring tensions between elected leaders and suffragists and the uncertainty surrounding women as an electoral group, Forging the Franchise sheds new light on the strategic reasons behind women’s enfranchisement.

Dawn Langan Teele is the Janice and Julian Bers Assistant Professor in the Social Sciences at the University of Pennsylvania. She is the editor of Field Experiments and Their Critics. 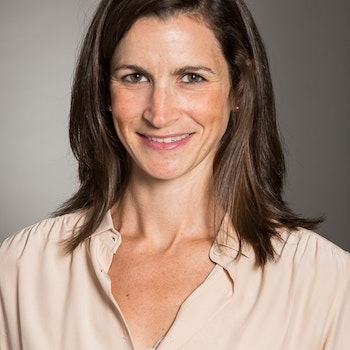 "The book presents a compelling strategic explanation for the recognition of women’s voting rights. However, perhaps the most interesting aspect of this work is that it analyses the development of women’s enfranchisement in the general framework of the democratization process. The book helps to fill that gap and is a significant contribution toward a holistic understanding of the emergence and consolidation of democratic regimes."—Arantxa Elizondo, Democratization

"This book is well worth reading and will probably disrupt the literature on democratisation and make its way onto reading lists in a variety of fields that deal with the enfranchisement of women and electoral reform. It is a very worthy book, deserving of high praise for clarity and common sense."—Nicoletta F. Gullace, History: Journal of the Historical Association

“This book examines the circumstances under which governments gave the right to vote to women in the United States, France, and England. Focusing on the strategic interactions between suffrage activists and elected politicians that led male legislators to approve suffrage bills, Teele’s account challenges the conventional wisdom that usually highlights increasing militancy among suffragettes and changing cultural norms and public opinion about women. A pleasure to read.”—Lisa Baldez, Dartmouth College

“Why did women get the vote when and where they did? This brilliant book places women’s suffrage where it belongs: as central to the historical processes of democratization, and as a critical consequence of women’s mobilization, political competition, and the shifting interests of previously skeptical politicians and political parties. For scholars of regime change, electoral realignment, and party competition, Forging the Franchise is a must-read.”—Anna Grzymała-Busse, Stanford University

“Teele’s profound, provocative book brings fresh insights to the question of why women won the vote at certain times in some countries but not others. Through analysis of the battles over suffrage in the United Kingdom, United States, and France, she shows that male-dominated parties supported reform when they needed votes that suffragist strategies promised to deliver. This is essential reading for scholars, students, and advocates of equal rights.” —Mala Htun, University of New Mexico

“I was in for a real surprise on reading this book, and you will be too if the existing literature on male enfranchisement has been your guide so far. Teele’s explanation shows that making women visible in the process of democratization requires abandoning longstanding assumptions embedded in work on this area. This book has fundamentally changed the ways I will think about the intersection of elite politics and suffrage movements going forward.”—James Mahoney, Northwestern University

"Finally, an analysis of the biggest lacuna in comparative politics—female enfranchisement. This is a work of fundamental importance."—James Robinson, University of Chicago

“Teele investigates the conditions under which democratic governments extended the franchise to women. In spite of the importance of the topic, the question of when and why suffrage was extended to women has often been ignored by scholars in comparative politics and political economy. I cannot think of an existing book that treats this question in as comprehensive a fashion.”—David Stasavage, New York University