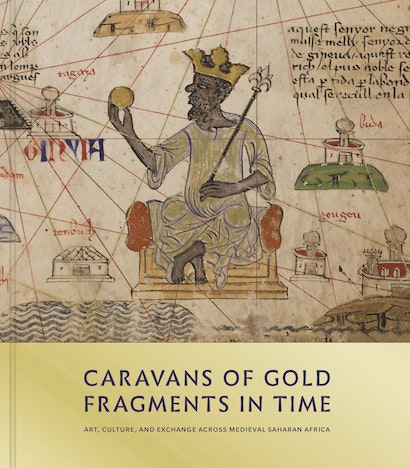 The Sahara Desert was a thriving crossroads of exchange for West Africa, North Africa, the Middle East, and Europe in the medieval period. Fueling this exchange was West African gold, prized for its purity and used for minting currencies and adorning luxury objects such as jewelry, textiles, and religious objects. Caravans made the arduous journey by camel southward across the Sahara carrying goods for trade—glass vessels and beads, glazed ceramics, copper, books, and foodstuffs, including salt, which was obtained in the middle of the desert. Northward, the journey brought not only gold but also ivory, animal hides and leatherwork, spices, and captives from West Africa forced into slavery.

Caravans of Gold, Fragments in Time draws on the latest archaeological discoveries and art historical research to construct a compelling look at medieval trans-Saharan exchange and its legacy. Contributors from diverse disciplines present case studies that form a rich portrayal of a distant time. Topics include descriptions of key medieval cities around the Sahara; networks of exchange that contributed to the circulation of gold, copper, and ivory and their associated art forms; and medieval glass bead production in West Africa’s forest region. The volume also reflects on Morocco’s Gnawa material culture, associated with descendants of West African slaves, and movements of people across the Sahara today.

Featuring a wealth of color images, this fascinating book demonstrates how the rootedness of place, culture, and tradition is closely tied to the circulation of people, objects, and ideas. These “fragments in time” offer irrefutable evidence of the key role that Africa played in medieval history and promote a new understanding of the past and the present.

Published in association with the Mary and Leigh Block Museum of Art, Northwestern University

Kathleen Bickford Berzock is associate director of curatorial affairs at the Block Museum of Art at Northwestern University. She is the author of For Hearth and Altar: African Ceramics from the Keith Achepohl Collection and the coeditor of Representing Africa in American Art Museums: A Century of Collecting and Display.

"[Caravans of Gold, Fragments in Time] argues [that] the desert has always been not just permeable but heavily trafficked, much like the ocean, with trade as well as religions and cultural influences traveling back and forth, and with world-shaping effects. Part of the difficulty in conveying the importance of this region’s history has been its paucity of documentation. . . . [The] catalog make[s] up for this spectacularly with [its] display of the region’s legacy of artifacts, from pottery shards to sculpture and gold weights and coins."—Howard W. French, New York Review of Books

"The book is a well-illustrated, well researched companion volume that enlightening reading in its own right."—Current World Archaeology

"[A] richly illustrated tome comprising nineteen essays, underscores the magnitude of Africa’s influence on both the medieval world and the continued cultural expression in this region today . . . the depth of research is astounding."—Elizabeth Perrill, CAA Reviews

"The best museums and exhibitions ask us to rethink what we think we know. Caravans of Gold, Fragments of Time . . . reconsiders the story of the medieval West by shifting the viewpoint substantially south, to the Sahara."—Cammy Brothers, Wall Street Journal

"The book brings together a wealth of scholarly information not otherwise easily available in a single source, making it an extremely valuable resource for teachers and scholars. It is also beautifully produced, written in a clear and straightforward manner, and fairly priced…Caravans of Gold, book and exhibition, achieve the objective of making the history of medieval Africa captivating and accessible to a wide range of people—many who will be unfamiliar with this history. It does so through combining cutting-edge scholarship with beautiful objects."—Jean M. Borgatti, International Journal of African Historical Studies

"[Caravans of Gold, Fragments in Time], an ambitious catalogue, doesn’t simply redraw the boundaries of what constituted the medieval world, but argues for West Africa’s central importance in the complex systems of trade, exchange and interaction between Asia and Europe."—Lloyd de Bee, London Review of Books