Why political inequality is to blame for economic and social injustice 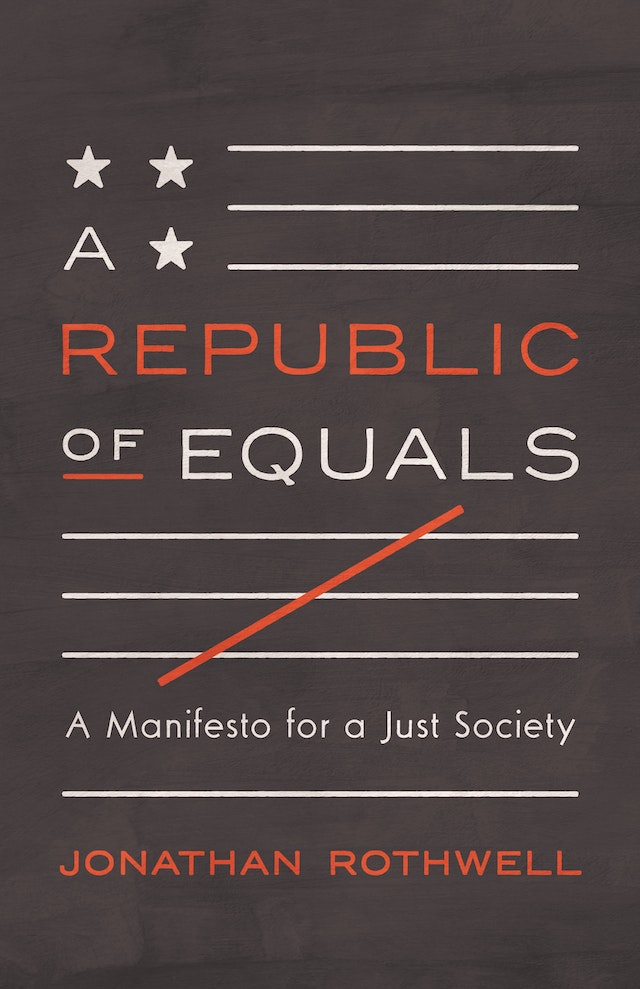 Political equality is the most basic tenet of democracy. Yet in America and other democratic nations, those with political power have special access to markets and public services. A Republic of Equals traces the massive income inequality observed in the United States and other rich democracies to politicized markets and avoidable gaps in opportunity—and explains why they are the root cause of what ails democracy today.

In this provocative book, economist Jonathan Rothwell draws on the latest empirical evidence from across the social sciences to demonstrate how rich democracies have allowed racial politics and the interests of those at the top to subordinate justice. He looks at the rise of nationalism in Europe and the United States, revealing how this trend overlaps with racial prejudice and is related to mounting frustration with a political status quo that thrives on income inequality and inefficient markets. But economic differences are by no means inevitable. Differences in group status by race and ethnicity are dynamic and have reversed themselves across continents and within countries. Inequalities persist between races in the United States because Black Americans are denied equal access to markets and public services. Meanwhile, elite professional associations carve out privileged market status for their members, leading to compensation in excess of their skills.

A Republic of Equals provides a bold new perspective on how to foster greater political and social equality, while moving societies closer to what a true republic should be.

Jonathan Rothwell is the Principal Economist at Gallup and a visiting scholar at George Washington University's Institute of Public Policy. He lives in Washington, DC. Twitter @jtrothwell

"A searching examination of the decline of democratic ideals in the face of inequality—racial, political, and economic. It is also striking on many counts, including its fluency in several branches of the social sciences beyond economics. The author resists easy characterization. There's something to ponder on every page. A sometimes-daunting but essential addition to the discussion of inequality and its remedies."—Kirkus Reviews

"The book contains many surprises documented with scholarly research and statistical analyses. The fact that Rothwell is principal economist at Gallup and senior fellow at the Brookings Institution makes his approach and conclusions even more valuable—even if I don’t always agree with him. I am not sure he will succeed selling the value of free markets to the left or, for that matter, to the right, but his book is well worth reading if one wants to think seriously about equality and inequality."—Pierre Lemieux, EconLib

"The rhetoric around the economy is too often used as a power play to tilt markets to advantage mostly white elites over everyone else. Cutting through this rhetoric involves another kind of power—the ability and courage to articulate how and why inequality exists. A Republic of Equals thoroughly reveals how racism, far-right nationalism, and xenophobia reward the 'winners' of economies as one might have you believe ingenuity, bootstrapping, and stick-to-itiveness do. Rothwell's work is so compelling that it forces readers to imagine a world in which hatred and bias don't put a drag on our collective potential."—Andre Perry, author of Know Your Price: Valuing Black Lives and Property in America’s Black Cities

"Jonathan Rothwell offers a remarkably lucid and trenchant account of the U.S. political economy, making the case that market societies don’t just happen but are the result of political choices that render economic relations more or less egalitarian. Although his incisive analysis reveals how the rules of market competition have been rewritten in recent decades to benefit narrow special interests rather than the broader public, it also offers a hopeful program of pragmatic political actions that can be undertaken to move the nation closer to fulfilling its historical aspirations to be 'a republic of equals.' It is a must-read for all those seeking to create a fairer and more equitable American society."—Douglas Massey, Princeton University

"Jonathan Rothwell's book debunks much of the conventional wisdom and sheds new light on the real sources of inequality—in the twin realities of racism and unequal political and institutional power. The genius of the book is in charting a path to how to build a far more just and prosperous society. A must-read for all those who wish for a better future for America and the world."—Richard Florida, author of The Rise of the Creative Class

"Powerful and compelling. Rothwell adds new dimensions to the discussion of inequality and its consequences, which now include the rise of populist nationalism across the developed world. His arguments are especially timely as we head into an election season where the politics of inequality will take center stage. This book should be right at the forefront of the debate."—Katherine S. Newman, author of Downhill from Here: Retirement Insecurity in the Age of Inequality

"Jonathan Rothwell brilliantly takes down many of the commonly accepted explanations for the deepening inequality that is undermining belief in the American dream. He shows that disproportionate rewards to elite professionals are not explained by genes, intelligence, or work ethic but rather by inequities in the distribution of political influence, unequal access to good education, and other factors that perpetuate these patterns. His proposals are bold and his explanations are convincing."—Carol Graham, Brookings Institution

"Social, economic, and psychological inequalities are difficult to remediate; change for the better can be frustratingly slow. That tempts some thinkers to conclude that inequality is baked into our genes and brains, beyond the reach of our best intentions. A Republic of Equals shows how inequality emerges from the complex dynamics of history, biology, economics, social justice, and education. Its conclusions are scientifically informed and profoundly hopeful."—Eric Turkheimer, University of Virginia

"Timely, well-written, and engagingly ambitious, A Republic of Equals is a provocative account of how the economic data on inequality needs to be understood in terms of the political claims that shape it and determine it. This is a book that is likely to have a broad reach."—Duncan Kelly, author of The Propriety of Liberty: Persons, Passions, and Judgement in Modern Political Thought

"I enjoyed reading A Republic of Equals. This is a useful book about the rise of inequality and what to do about it."—Gabriel Zucman, author of The Hidden Wealth of Nations: The Scourge of Tax Havens