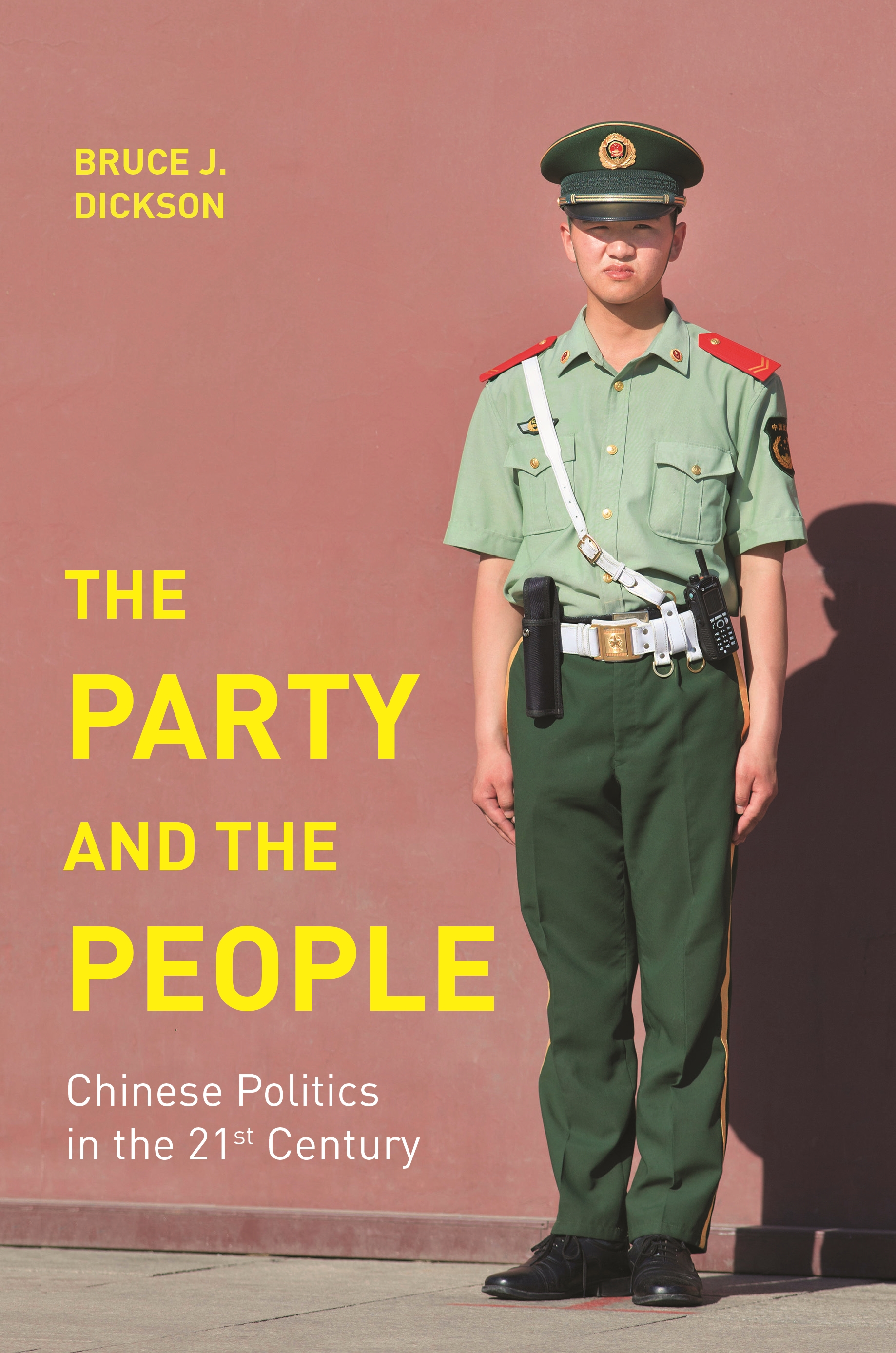 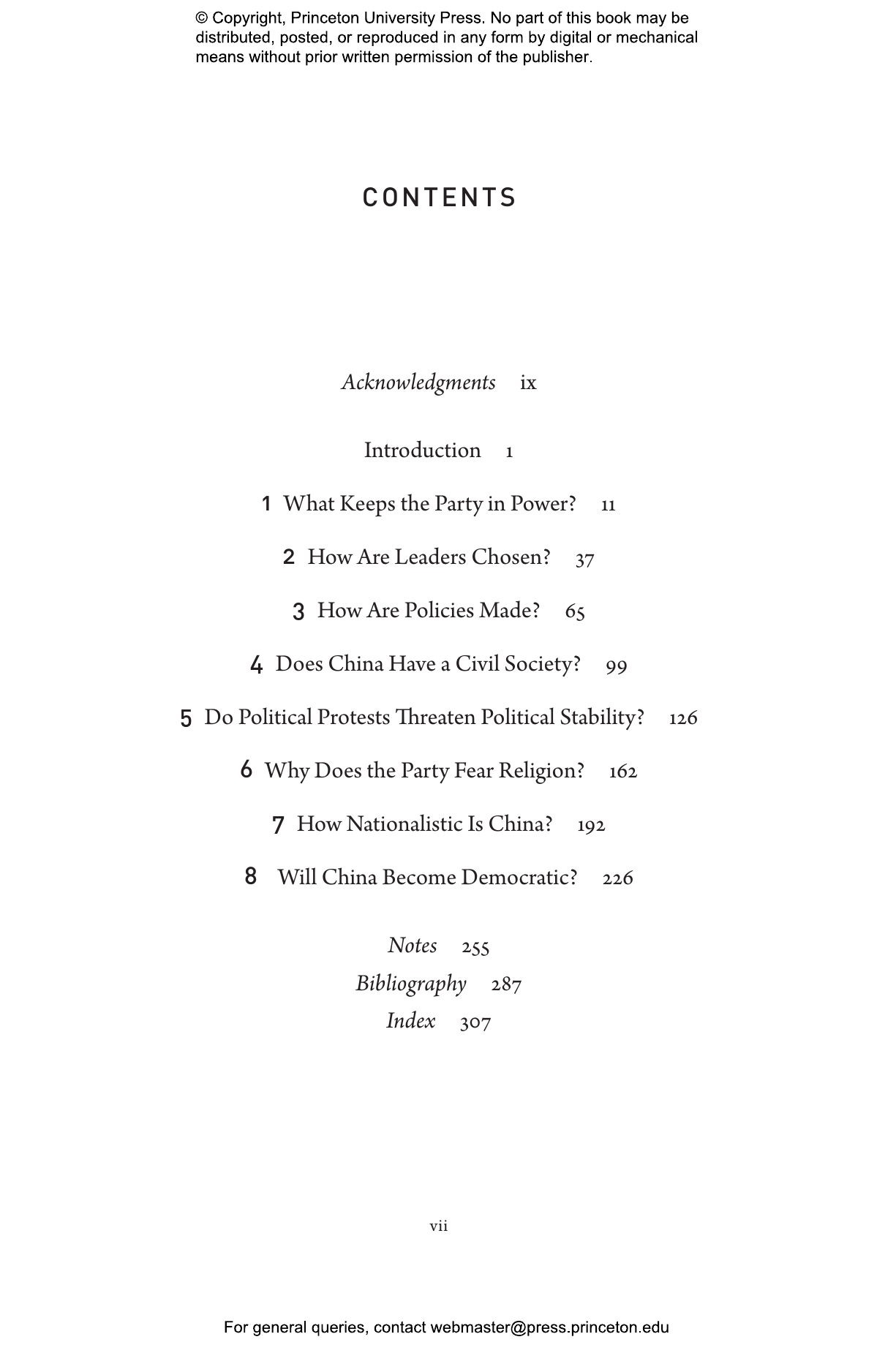 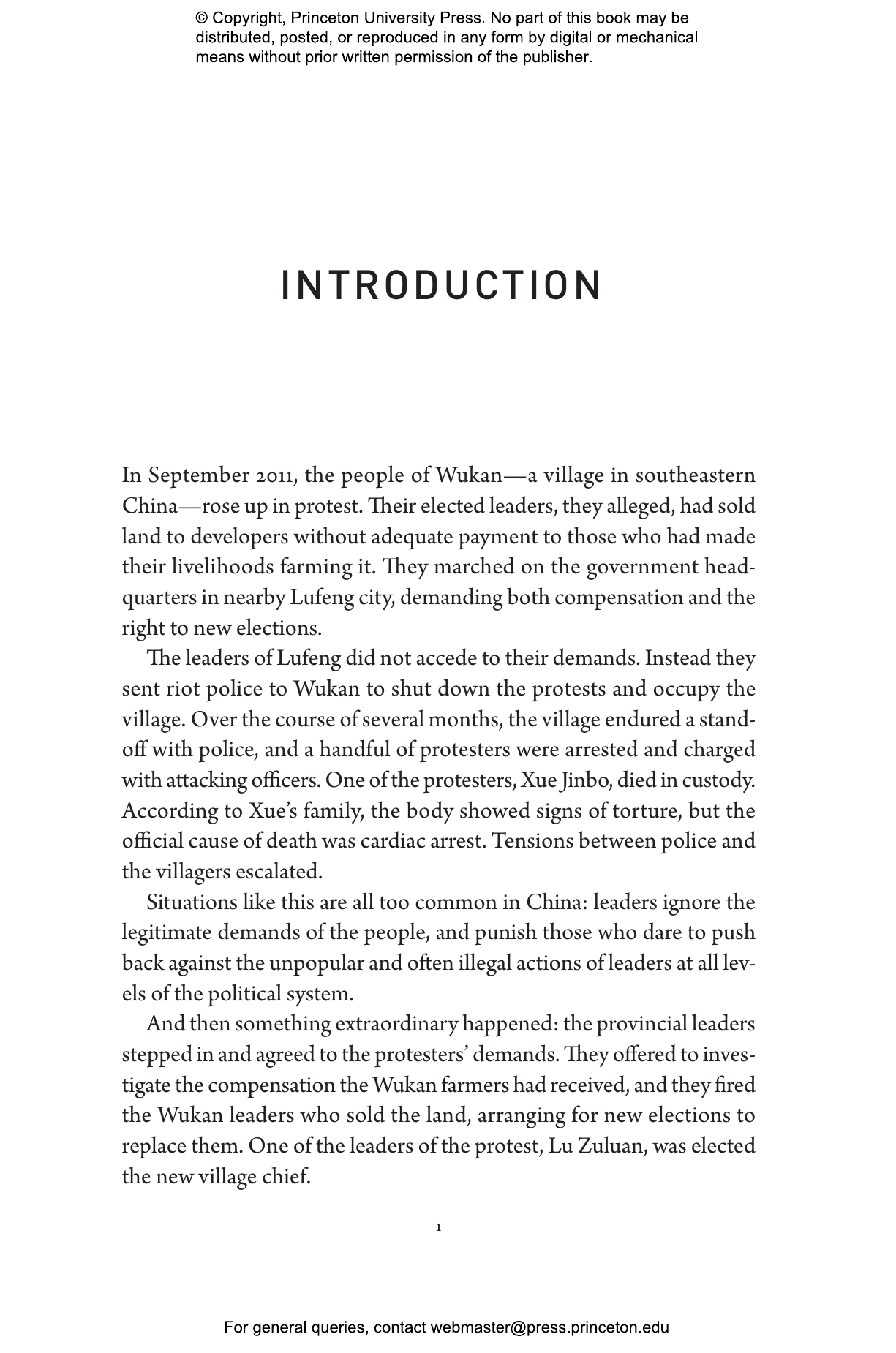 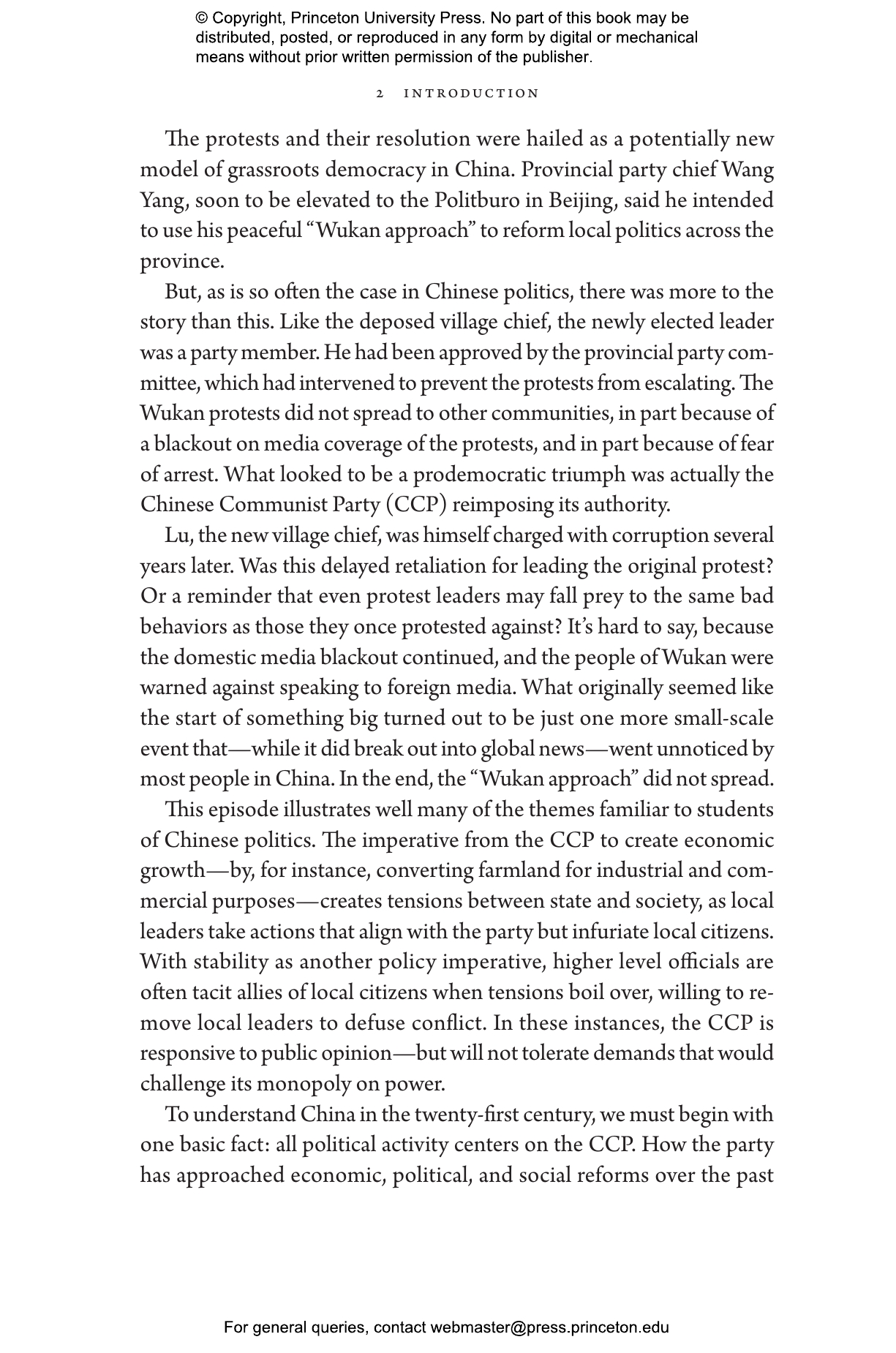 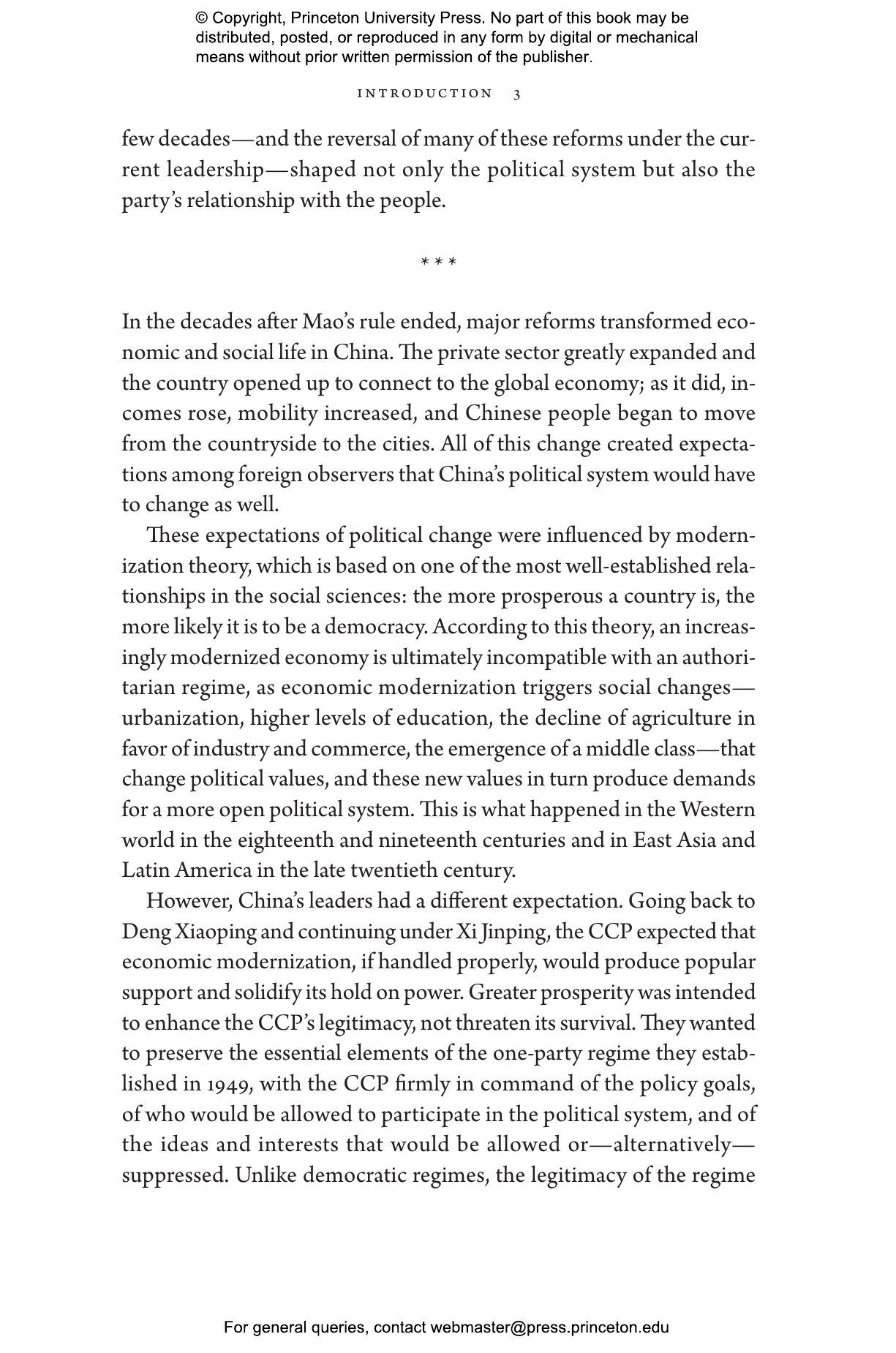 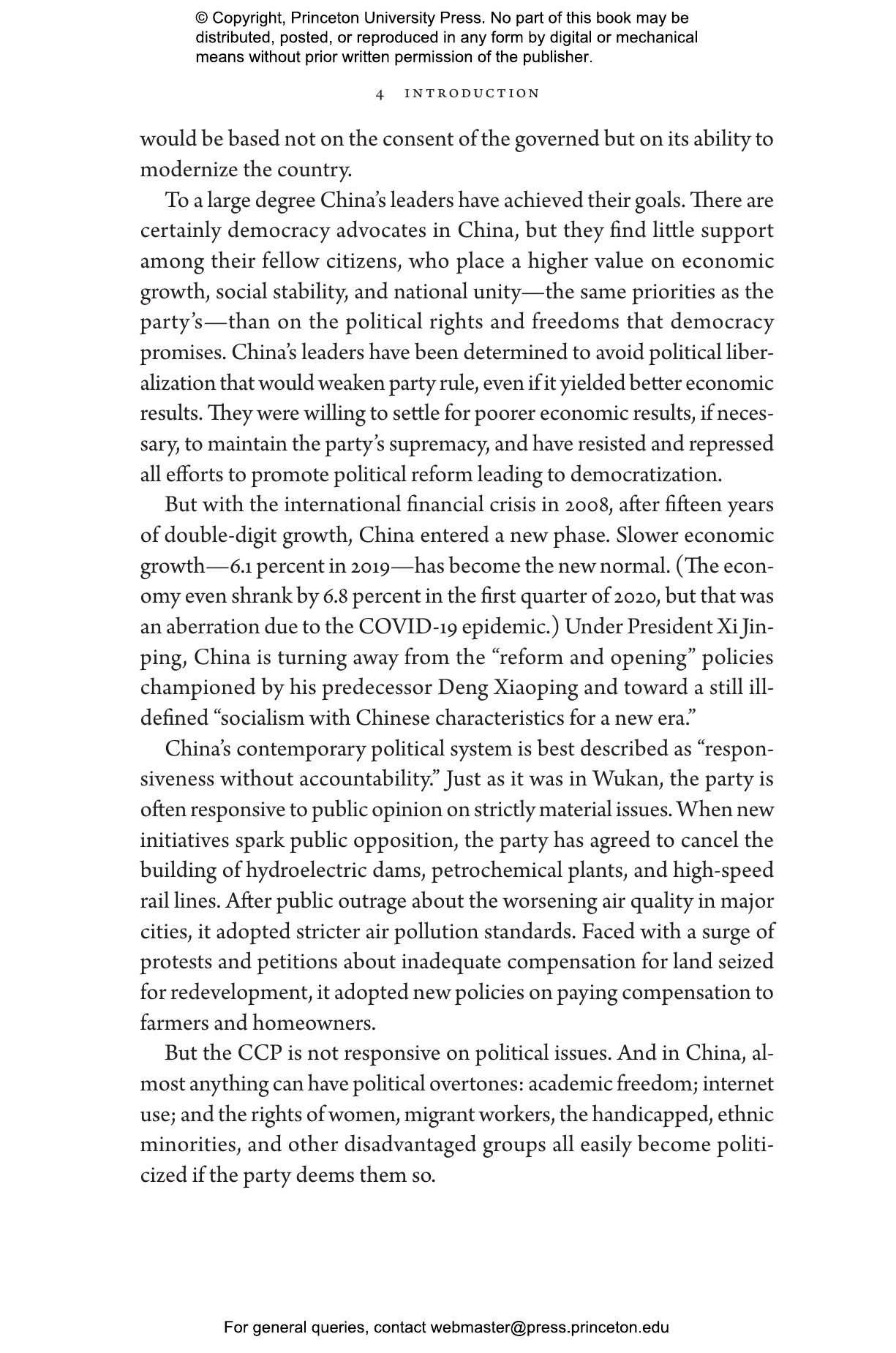 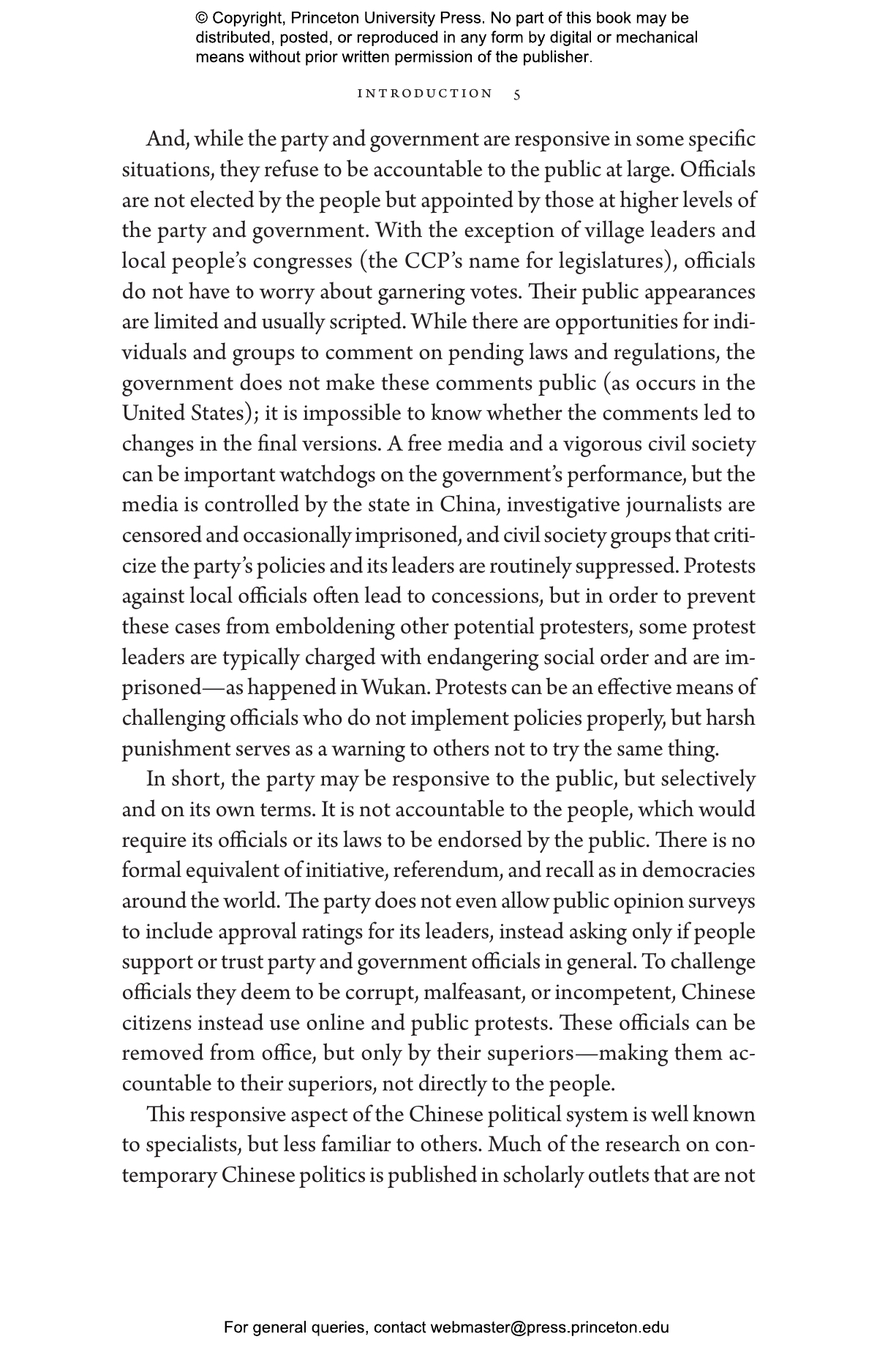 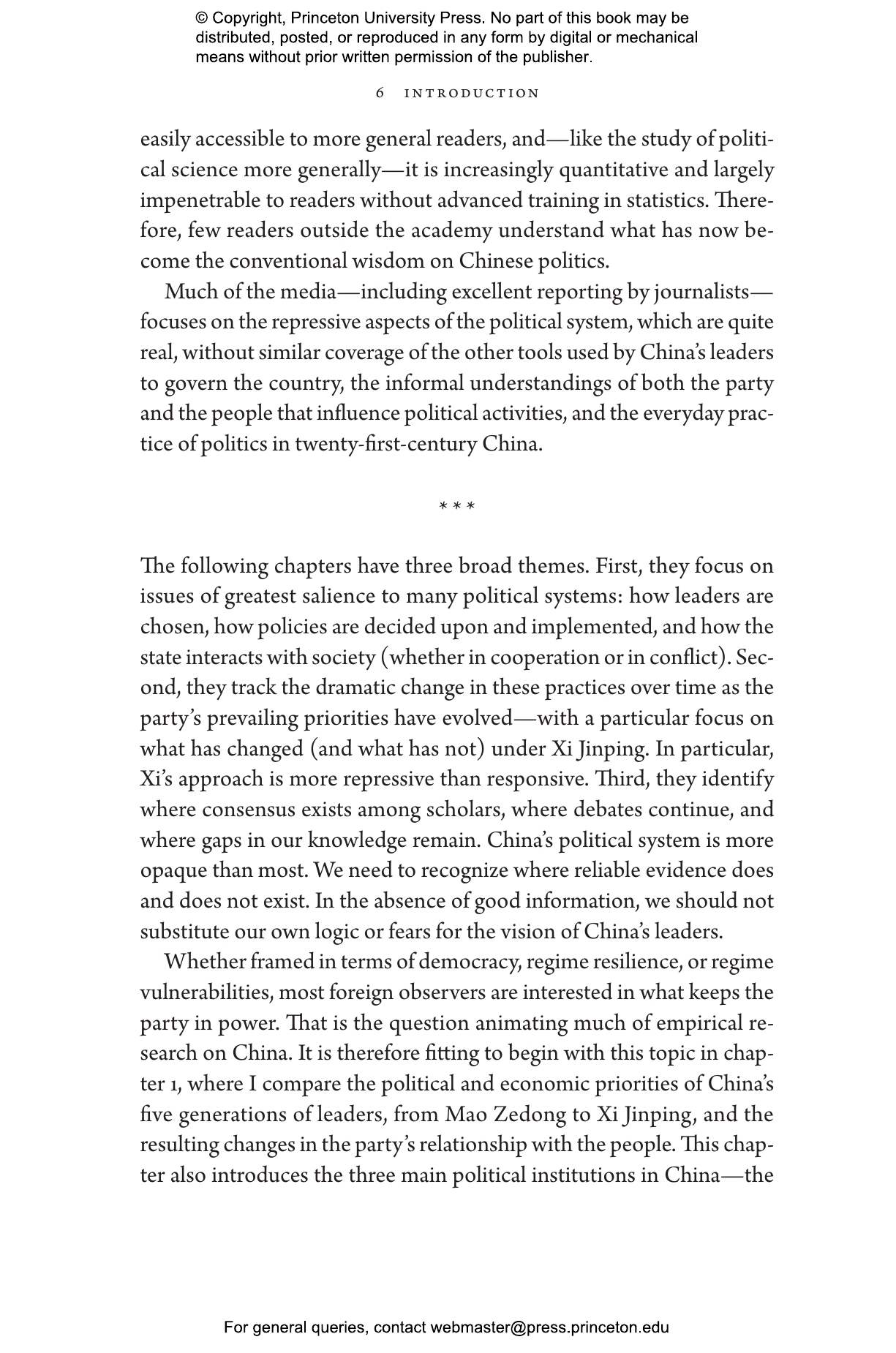 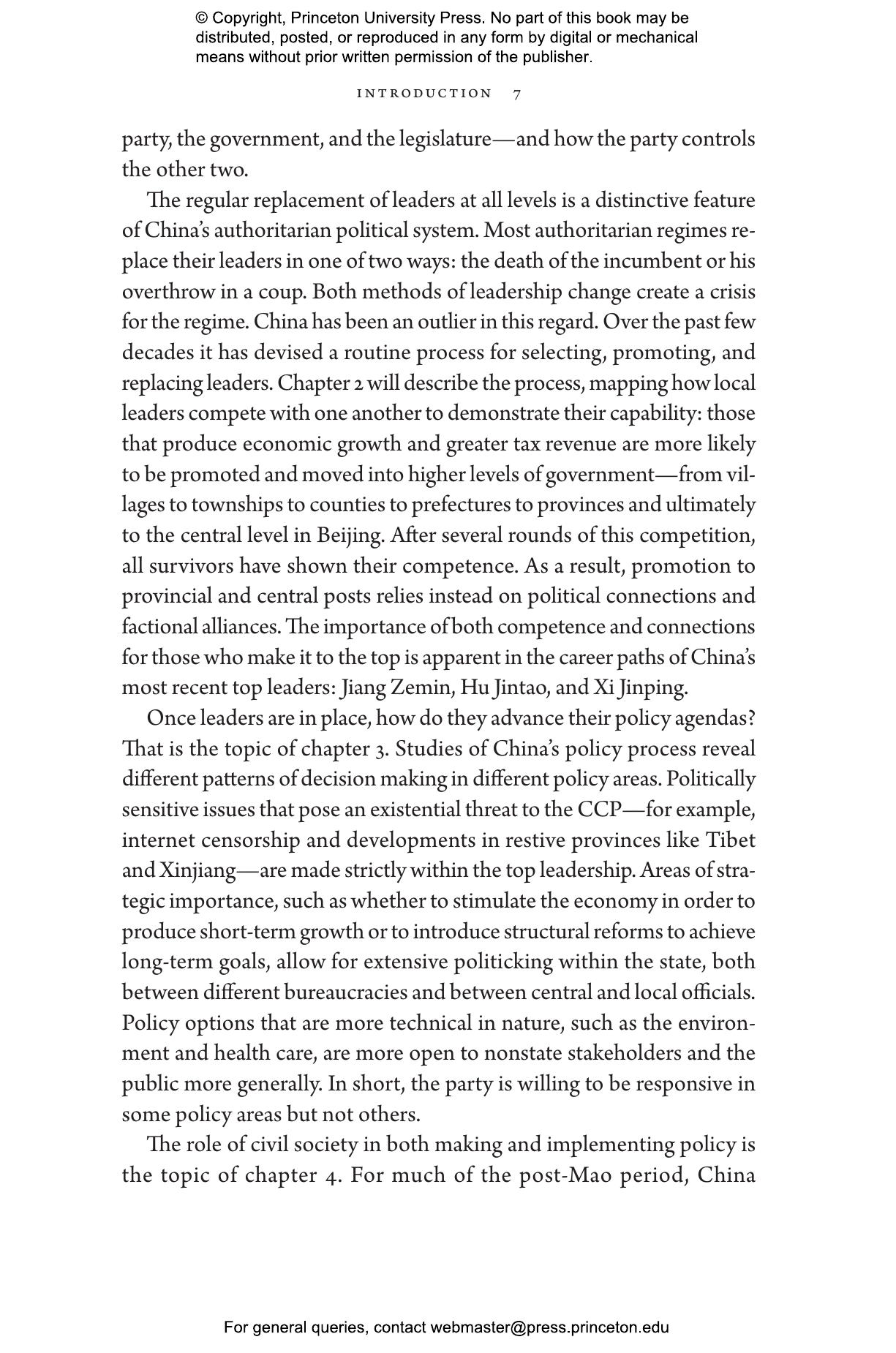 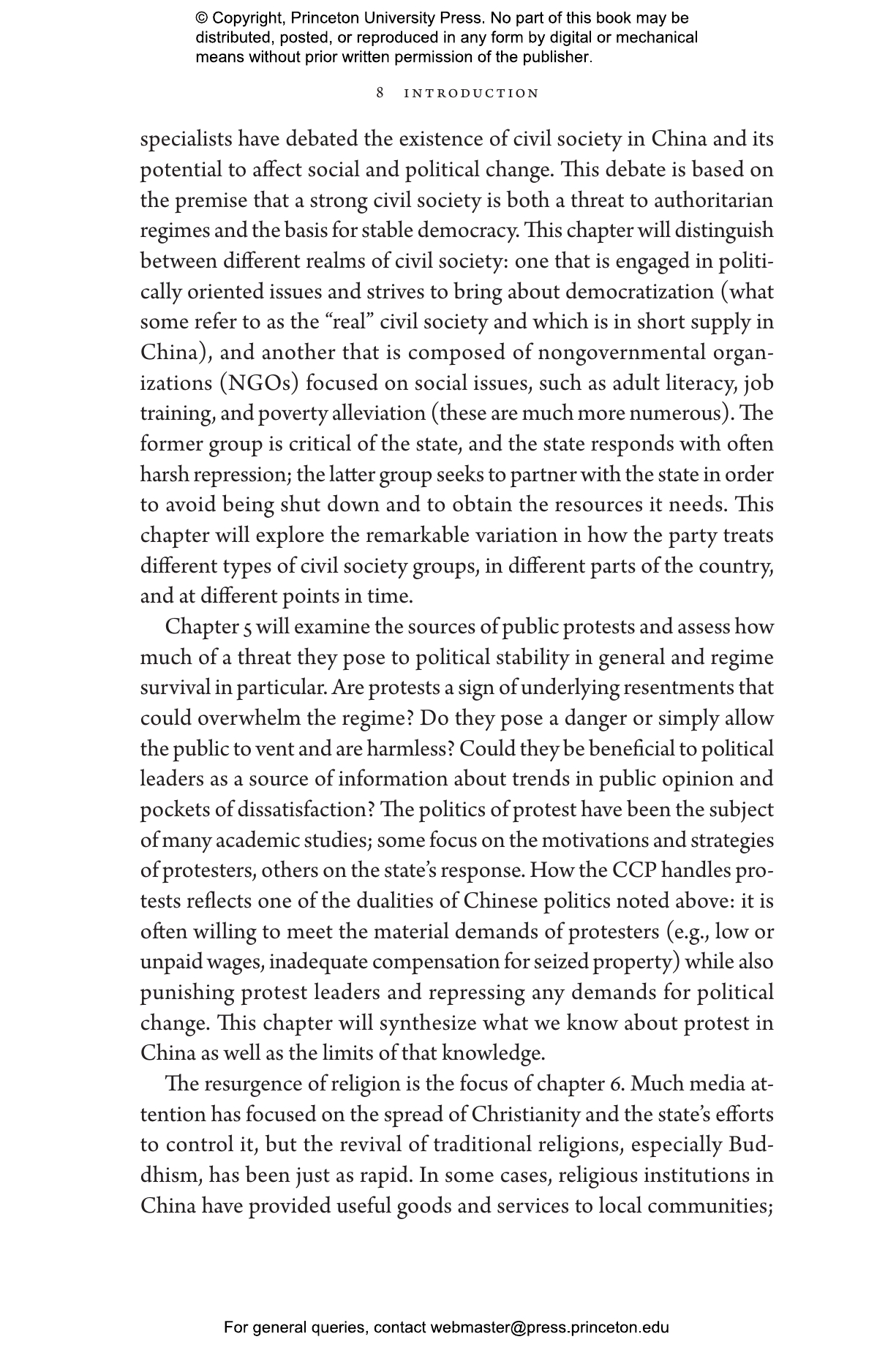 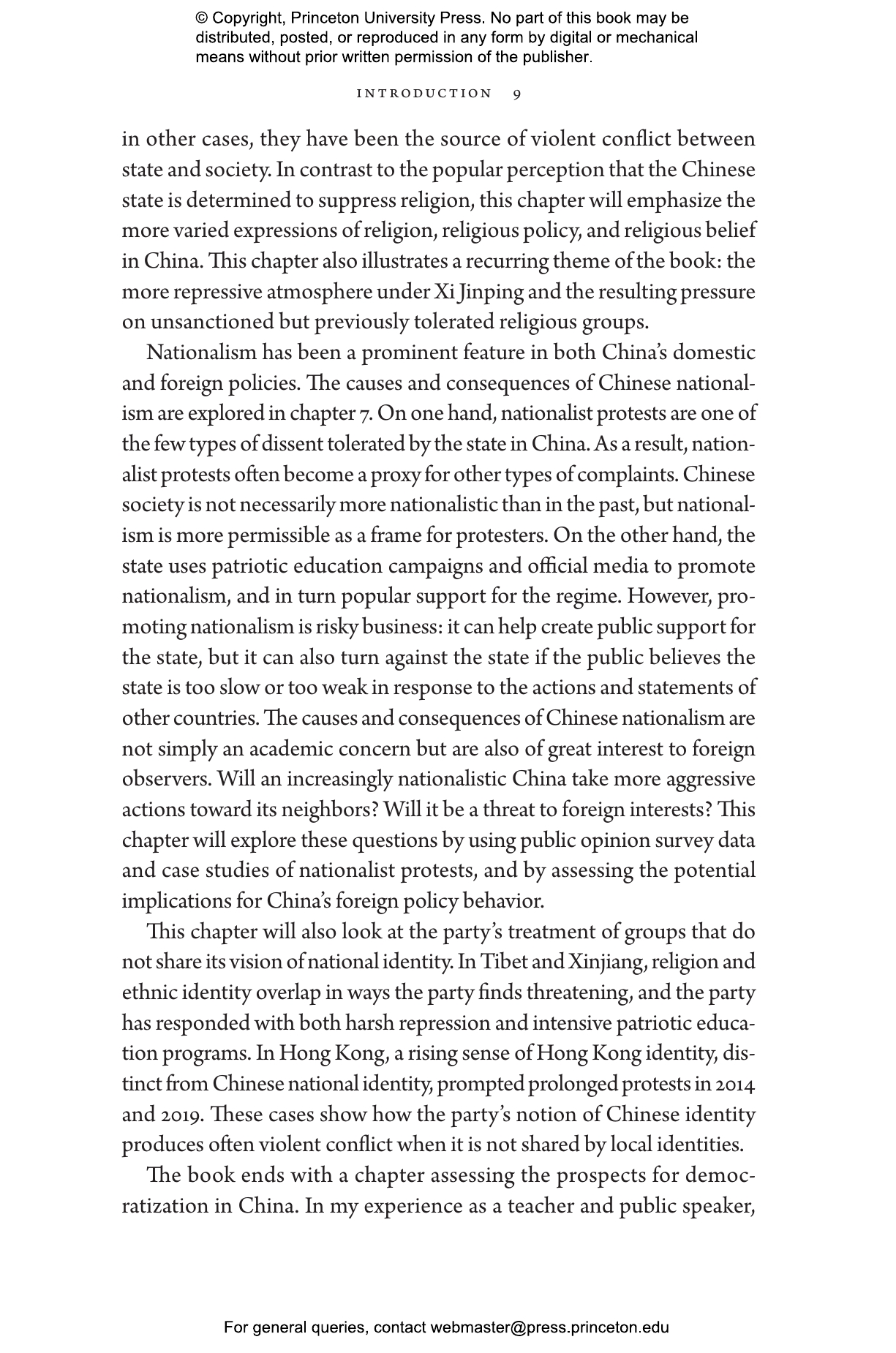 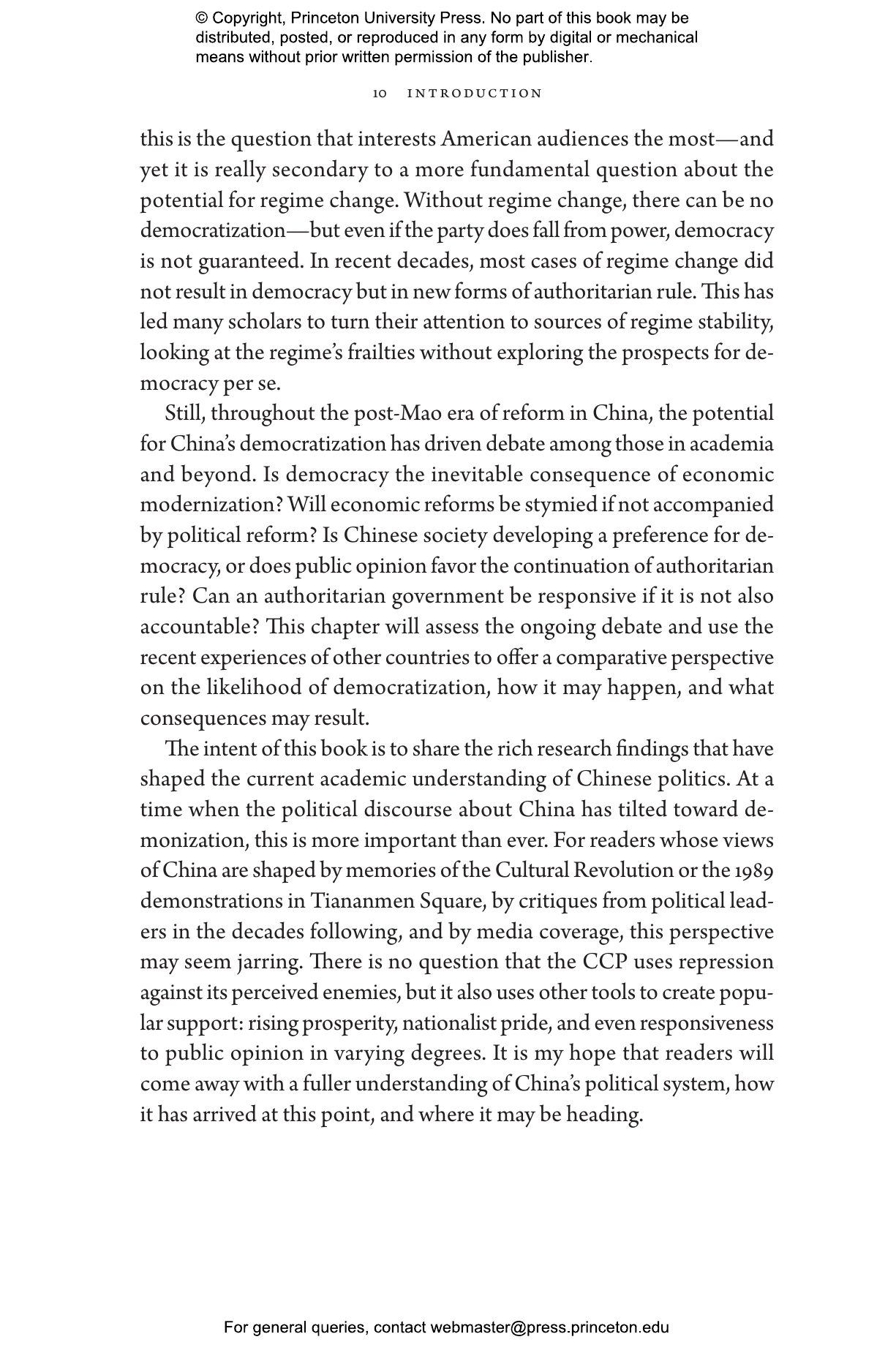 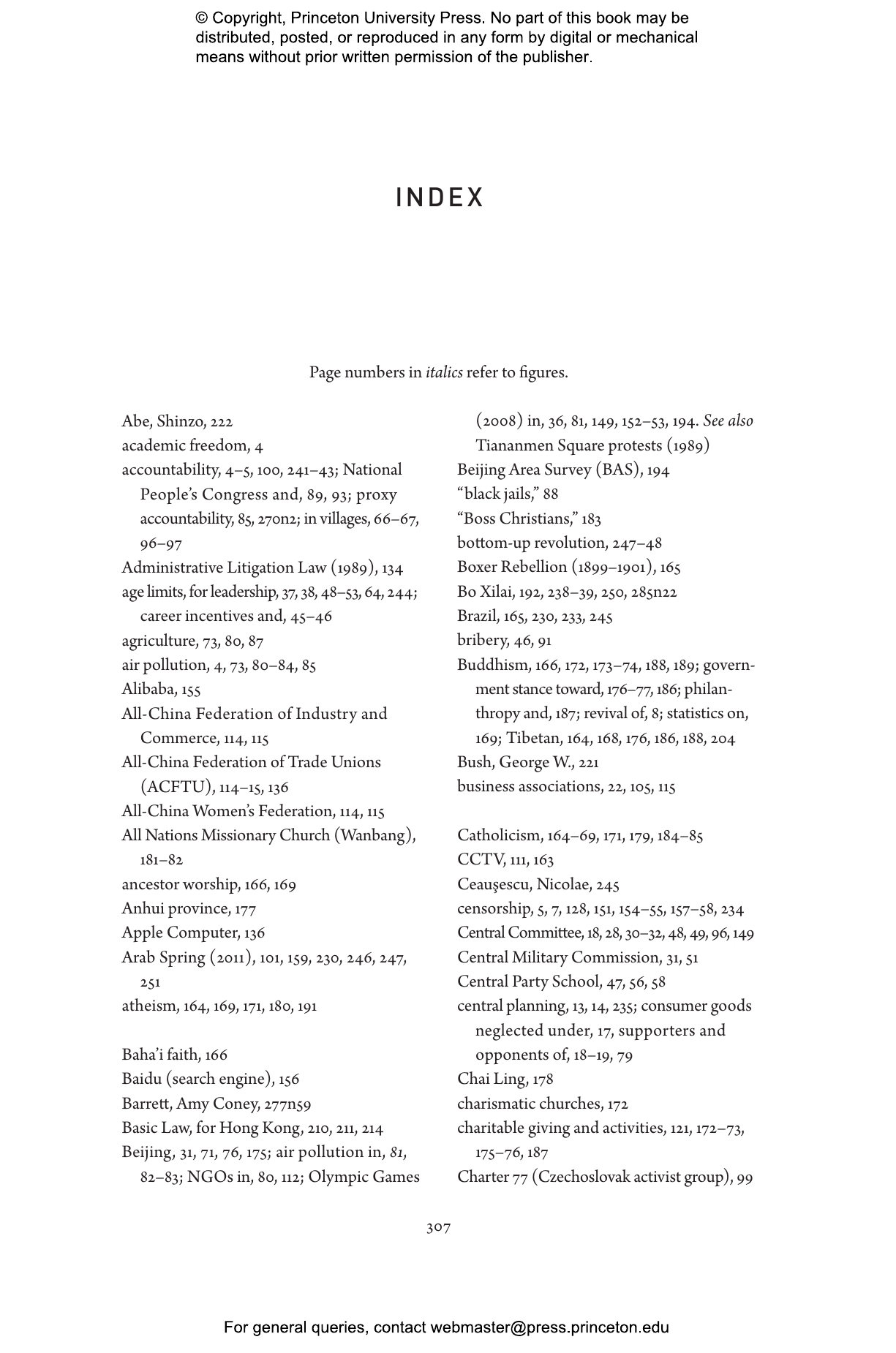 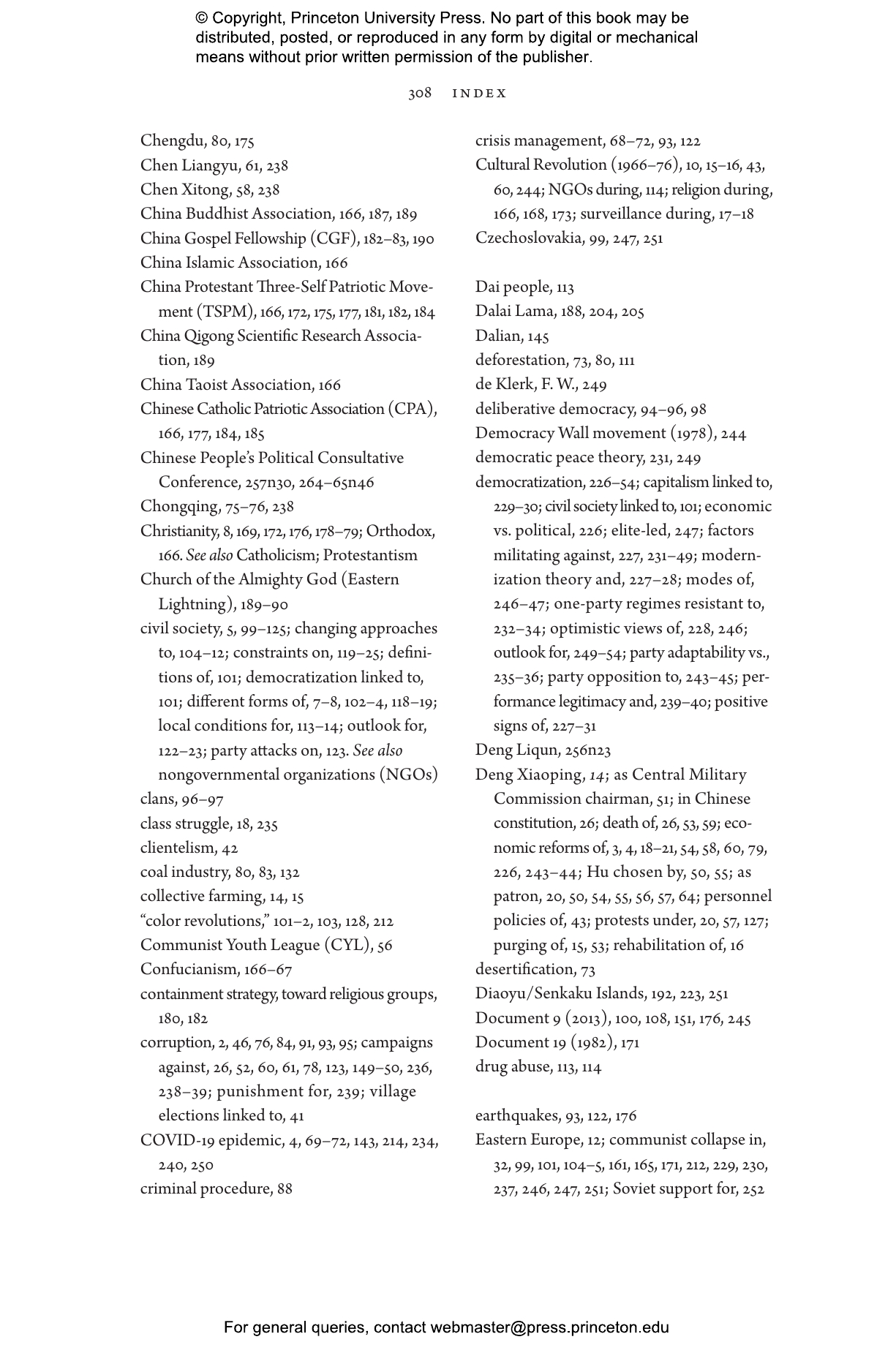 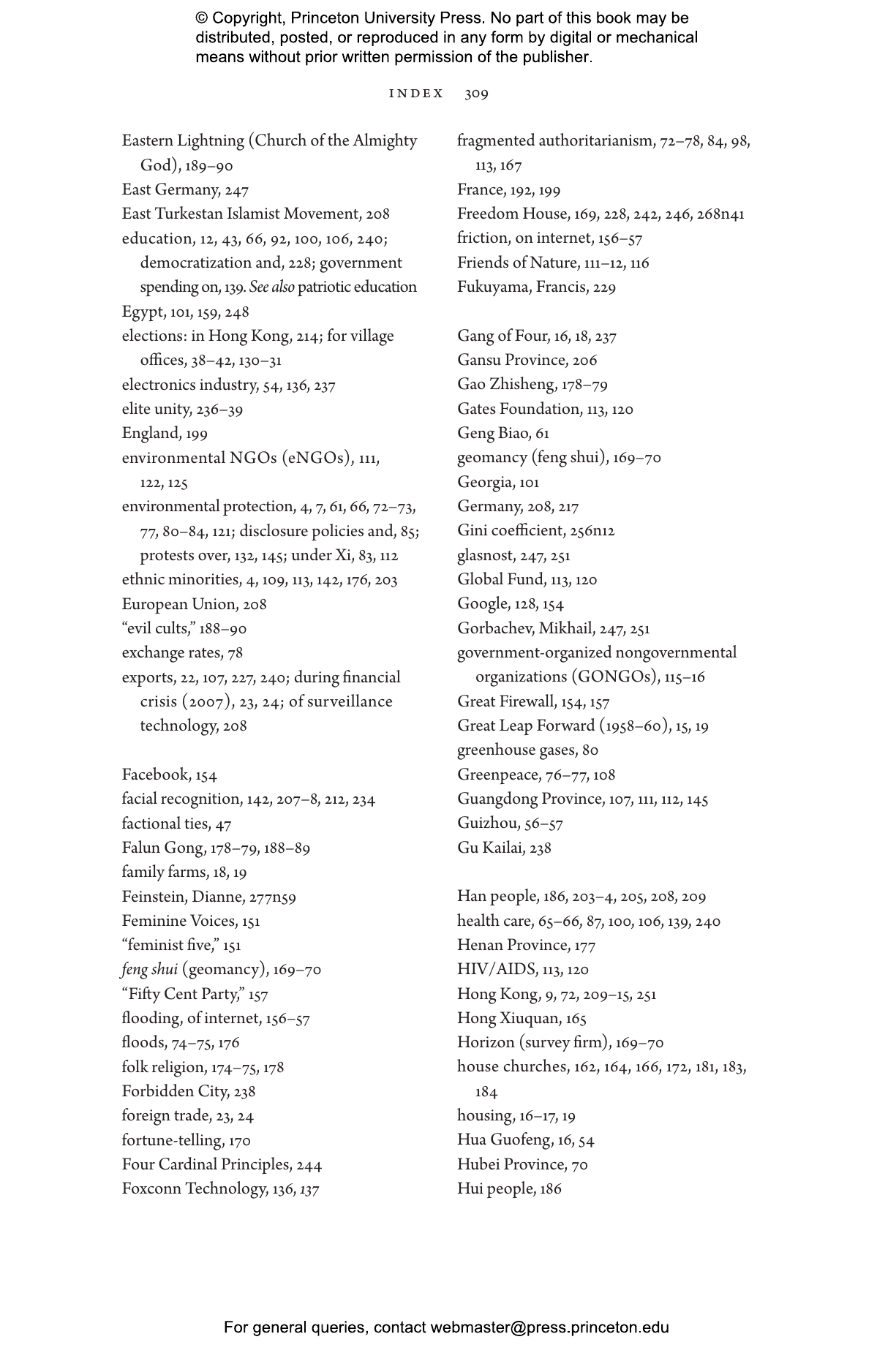 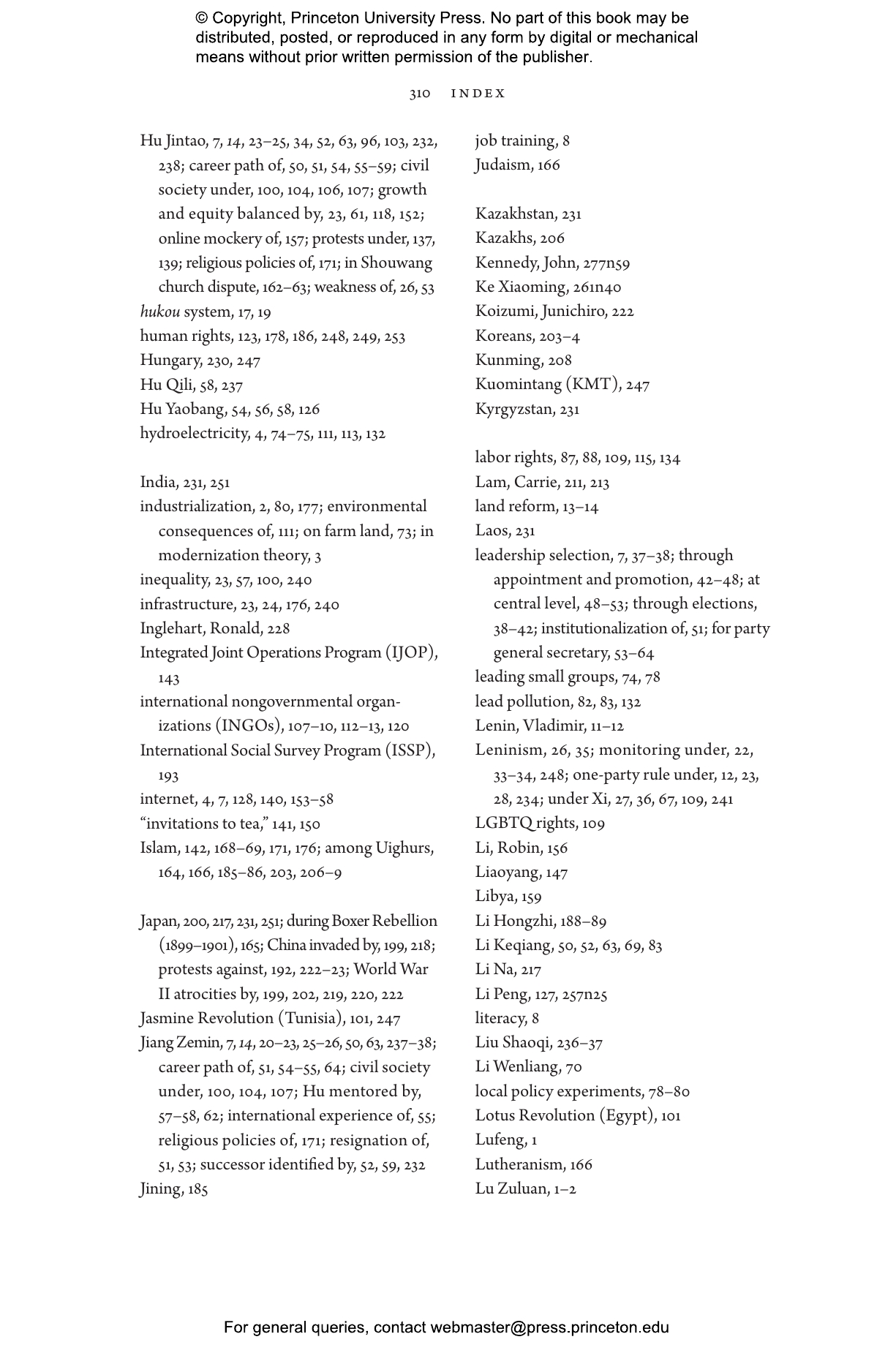 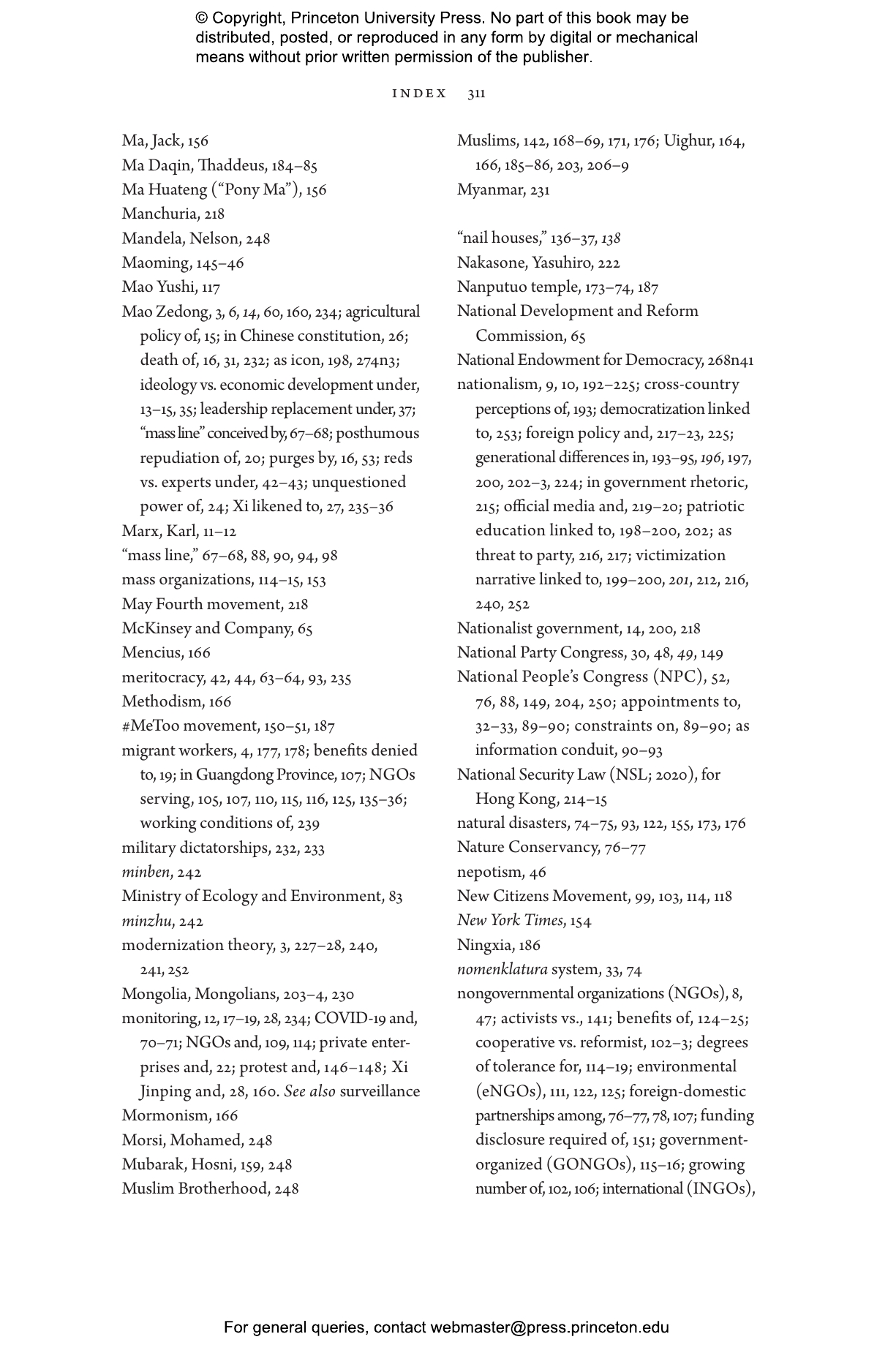 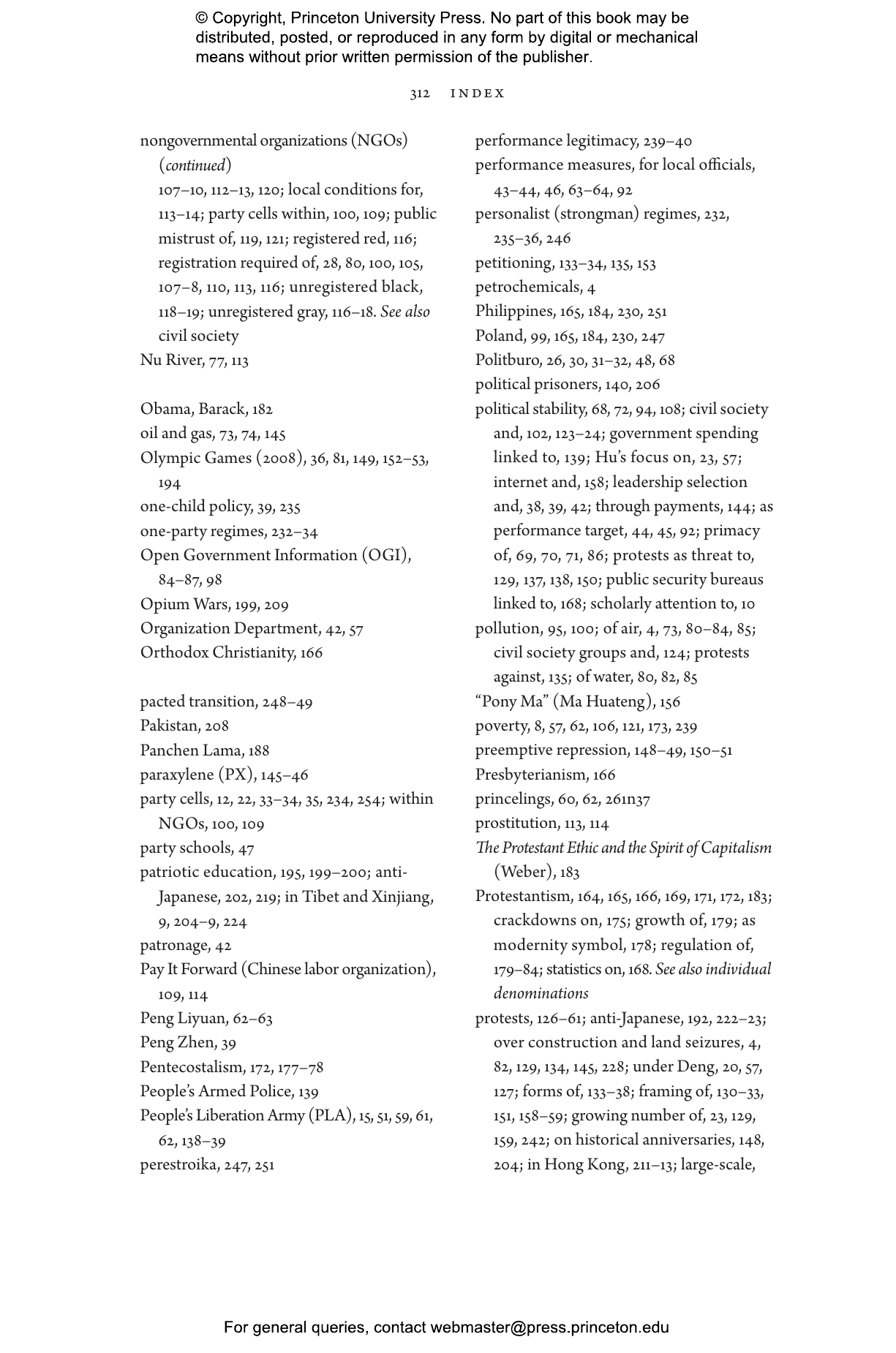 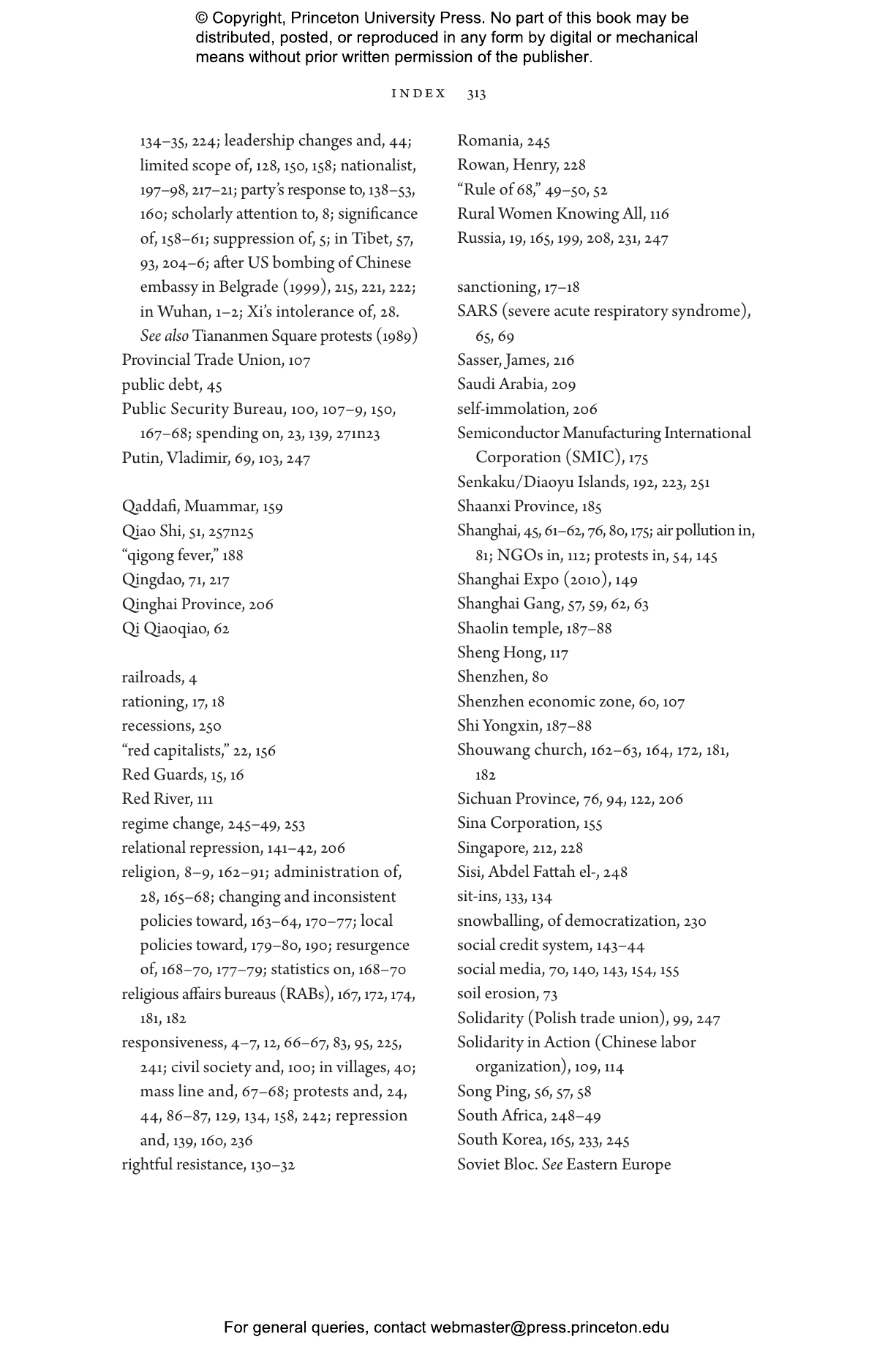 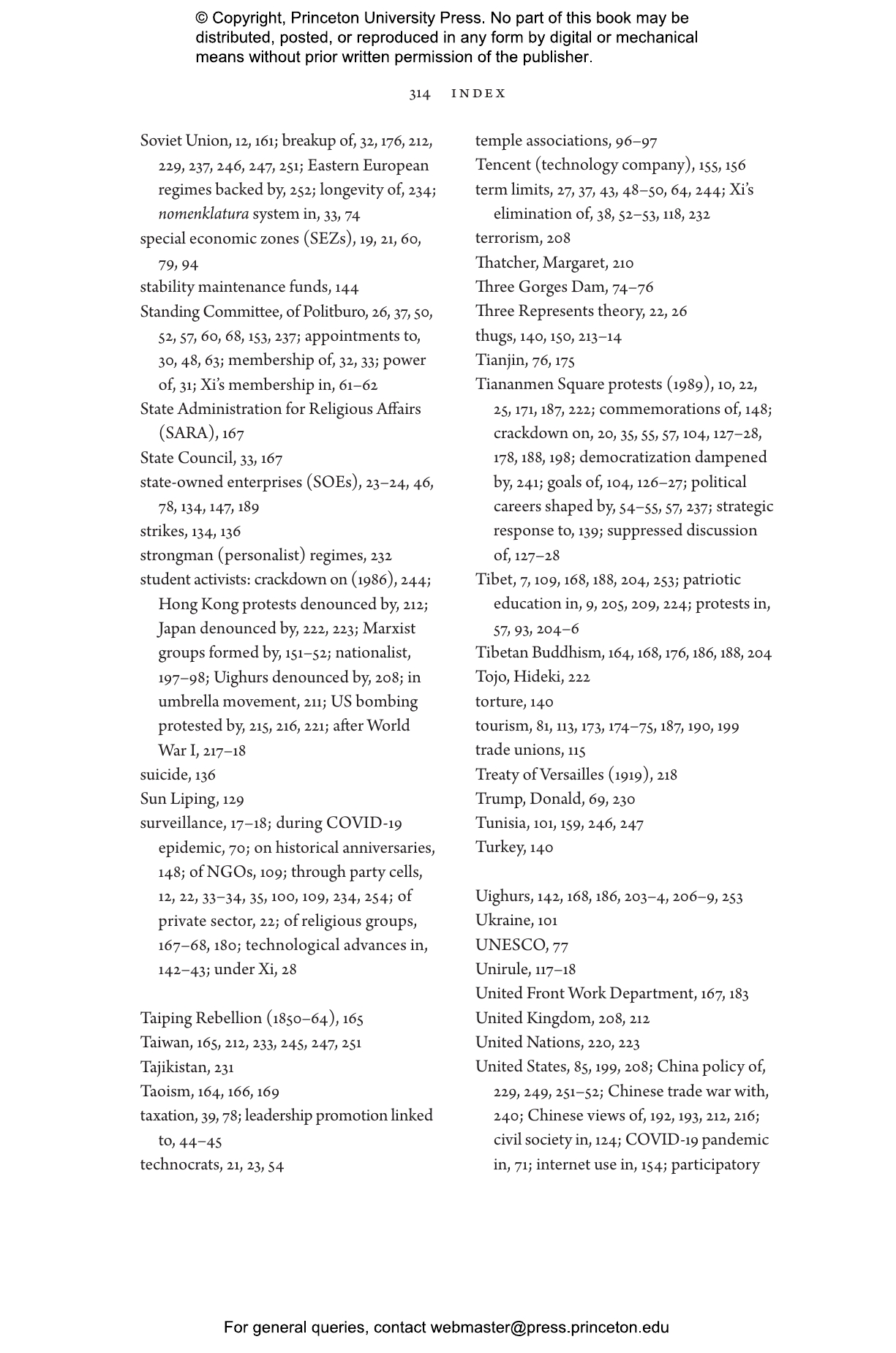 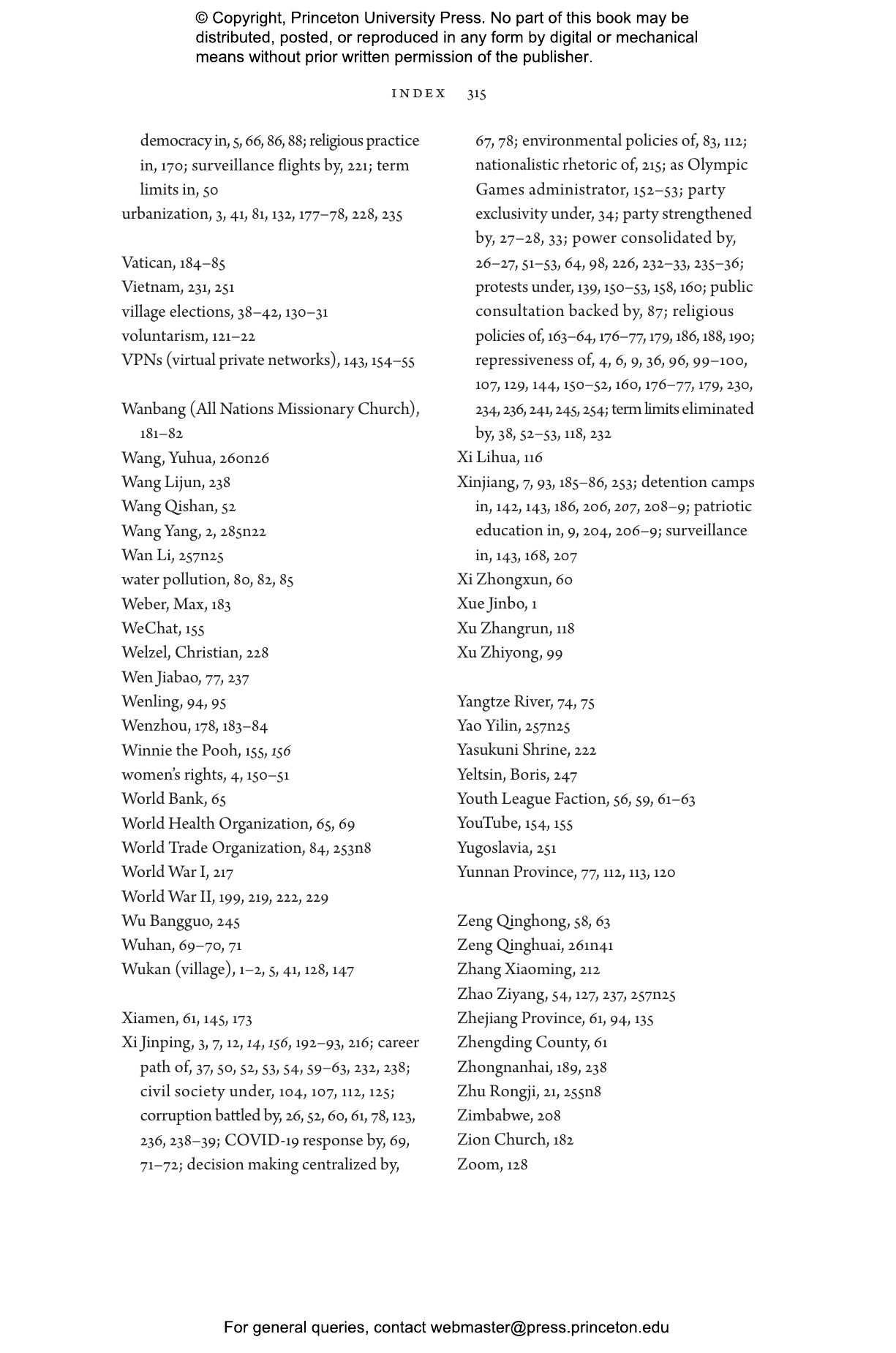 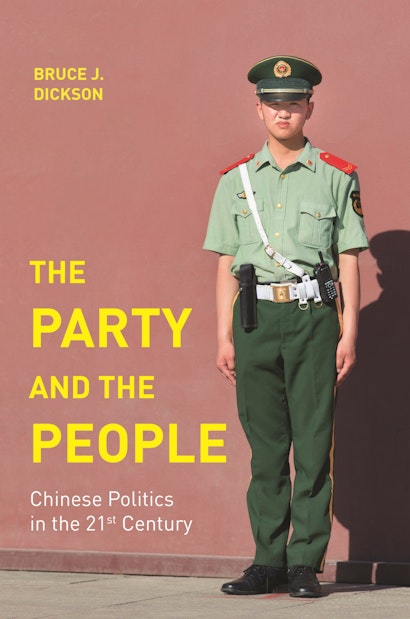 Since 1949, the Chinese Communist Party (CCP) has maintained unrivaled control over the country, persisting even in the face of economic calamity, widespread social upheaval, and violence against its own people. Yet the party does not sustain dominance through repressive tactics alone—it pairs this with surprising responsiveness to the public. The Party and the People explores how this paradox has helped the CCP endure for decades, and how this balance has shifted increasingly toward repression under the rule of President Xi Jinping.

Delving into the tenuous binary of repression and responsivity, Bruce Dickson illuminates numerous questions surrounding the CCP’s rule: How does it choose leaders and create policies? When does it allow protests? Will China become democratic? Dickson shows that the party’s dual approach lies at the core of its practices—repression when dealing with existential, political threats or challenges to its authority, and responsiveness when confronting localized economic or social unrest. The state answers favorably to the demands of protesters on certain issues, such as local environmental hazards and healthcare, but deals harshly with others, such as protests in Tibet, Xinjiang, or Hong Kong. With the CCP’s greater reliance on suppression since Xi Jinping’s rise to power in 2012, Dickson considers the ways that this tipping of the scales will influence China’s future.

Bringing together a vast body of sources, The Party and the People sheds new light on how the relationship between the Chinese state and its citizens shapes governance.

The paradox of Chinese politics

"The Party and the People provides a wonderfully clear-eyed look at how the CCP has reinvented itself since 1989."—Jeffrey Wasserstrom, Mekong Review

"Dickson’s book gives a useful overview of the various bodies that run China and the party’s involvement in them. He also surveys a series of important questions, such as why the CCP doesn’t like civil society or religious groups. He is especially strong on the issue of nationalism, which many foreign observers assert is growing in China, especially among young people. Dickson gives a sure-footed assessment of public opinion data to show that this is not the case, and that young people are in fact less nationalistic than their parents’ generation."—Ian Johnson, New York Review of Books

"The Party and the People ... drafts a helpful balance sheet of the party’s strengths and weaknesses, giving readers a better understanding of how the CCP’s versatility enabled it to become the longest-ruling communist party in history."—Orville Schell, Foreign Affairs

"A good treatment of exactly what the title promises."—Tyler Cowen, Marginal Revolution

"An ideal text for college courses on Chinese politics, and the writing is fully accessible to general readers as well."—Choice

"Dickson offers a comprehensive primer on how the CCP chooses leaders and makes policy, how it responds to political protests with repression both hard and soft, and how it may use or constrain the forces of nationalism based on what aids its political survival. ... In calm, lucid prose, Dickson traces the evolution of the CCP since 1949, focusing on the recent divergence between local and higher-level leaders."—Nicolas Gattig, Japan Times

"A richly detailed, nuanced, and comprehensive analysis of Chinese politics today. Dickson pulls back the veil of mystery that surrounds China's leaders, what keeps them in power, their relationship with the Chinese people, and what might bring change in the future. There is no more important book for understanding China in the coming decades."—Elizabeth Economy, author of The World According to China

"Drawing on a truly impressive range of academic literature to support an innovative argument, The Party and the People provides an accessible analysis of the relationship between the Chinese Communist Party and China’s citizens. This valuable book delves into such critical issues as protests, religion, nationalism, and future prospects for democratization in China, and could only have been written by someone with a stellar understanding of Chinese politics."—William A. Joseph, editor of Politics in China: An Introduction

"Bruce Dickson has written a sharp, insightful, and cogent dissection of China's party-state and its sophisticated management mechanisms, from grading officials to quelling protests and co-opting useful NGOs. Repression has gone up under Xi Jinping, but Dickson shows how this is only one of the many tools in China's governing kit."—Richard McGregor, author of The Party: The Secret World of China's Communist Rulers

"The Party and the People tackles some of the most important questions about contemporary China and provides nuanced and persuasive answers regarding the survivability of the Chinese party-state in the post-Mao era. This illuminating survey of Chinese politics sets the research agenda in the field for some time to come."—Minxin Pei, author of China's Crony Capitalism: The Dynamics of Regime Decay