An engaging look at the aphorism, the shortest literary form, across time, languages, and cultures 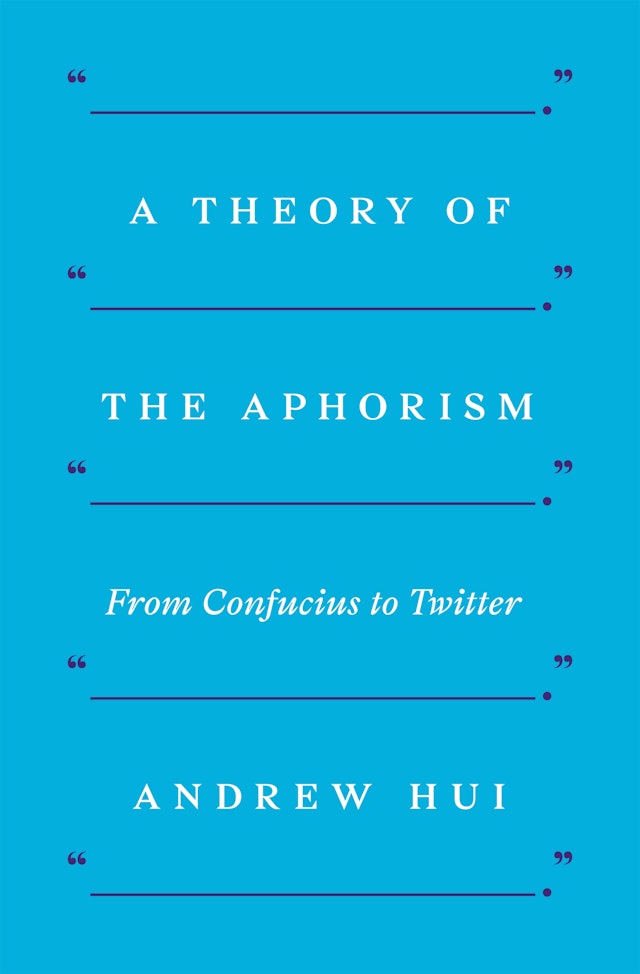 Aphorisms—or philosophical short sayings—appear everywhere, from Confucius to Twitter, the Buddha to the Bible, Heraclitus to Nietzsche. Yet despite this ubiquity, the aphorism is the least studied literary form. What are its origins? How did it develop? How do religious or philosophical movements arise from the enigmatic sayings of charismatic leaders? And why do some of our most celebrated modern philosophers use aphoristic fragments to convey their deepest ideas? In A Theory of the Aphorism, Andrew Hui crisscrosses histories and cultures to answer these questions and more.

With clarity and precision, Hui demonstrates how aphorisms—ranging from China, Greece, and biblical antiquity to the European Renaissance and nineteenth century—encompass sweeping and urgent programs of thought. Constructed as literary fragments, aphorisms open new lines of inquiry and horizons of interpretation. In this way, aphorisms have functioned as ancestors, allies, or antagonists to grand systems of philosophy.

Encompassing literature, philology, and philosophy, the history of the book and the history of reading, A Theory of the Aphorism invites us to reflect anew on what it means to think deeply about this pithiest of literary forms.

Andrew Hui is associate professor of humanities at Yale-NUS College, Singapore. He is the author of The Poetics of Ruins in Renaissance Literature.

"Aphorisms come at us in so many forms and from so many periods that one might think an academic study of aphorisms would aim to give them a family tree . . . . But Andrew Hui’s new study, A Theory of the Aphorism: From Confucius to Twitter, does something oddly and interestingly different . . . . Once the reader accepts [his] more expansive and sombre definition of the aphorism, much of interest follows."—Adam Gopnik, New Yorker

"In A Theory of the Aphorism: From Confucius to Twitter, Andrew Hui makes a lot out of a little . . . . If you have a hankering for infinity, eternity, or inexhaustibility, this is a book for you."—Willis Goth Regier, World Literature Today

"Lovers of aphorisms will derive huge pleasure from this elegant and informative book."—Paradigm Explorer

"This ambitious book explores some 2500 years of literature in under 250 pages to establish a theory of the aphorism. . . . Just as aphorisms rest on authority, not argument, so too Hui sidelines the systematic in favor of more aphoristic pursuits: to observe, pronounce, and artfully describe."—Stephen Kidd, Bryn Mawr Classical Review

"In my view, this book is groundbreaking. There’s an assumption in the way philosophy is often taught—in the West at least—that aphorisms are a quirky, awkward bit of philosophy that we’ll admit is there but we won’t focus on. I think it’s time other philosophers started thinking seriously about how aphorisms work. . . . It’s a really interesting and entertaining book."—Nigel Warburton, Five Books

"For anyone concerned with the humanities and their future within and without the academy [A Theory of the Aphorism] should prove compelling."—Lachlan Mackinnon, Times Literary Supplement

"In my view, this book is groundbreaking. There should be a lot of other books about aphorisms because it’s such a rich area."—Nigel Warburton, FiveBooks

"Like aphorism itself, Hui’s book is not bogged down with systematic argumentation, but rather proceeds in short sections that often end aphoristically. . . . Just as aphorisms rest on authority, not argument, so too Hui sidelines the systematic in favor of more aphoristic pursuits: to observe, pronounce, and artfully describe."—Stephen Kidd, Bryn Mawr Classical Review

"This book offers an engaging look at the aphorism, the shortest and perhaps most dismissed of literary forms. . . . A splendid, thought-provoking book."—Choice

"Andrew Hui's richly textured, multifaceted inquiry offers precious insights into what makes aphorisms—and aphoristic thinking—such a resounding form of expression across cultures and historical epochs. East and West, ancient and modern, and popular and esoteric come together in these pages in ways that lead you to wonder why a book like this was not written a long time ago."—Robert Pogue Harrison, author of Juvenescence: A Cultural History of Our Age

"This is a landmark book of enormous originality and breathtaking scope, immensely learned and beautifully written. Andrew Hui shows us why the aphorism has been omnipresent in world philosophy and religion: the aphorism provokes, confuses, reveals, and inspires in a different way on every page. His explanatory model draws vital new connections over geography and time as authors and their readers move constantly between density and unfolding, canonization and radical openness."—Kristine Haugen, California Institute of Technology