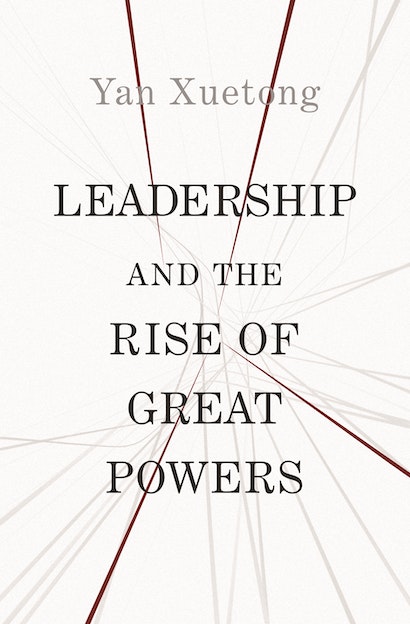 While work in international relations has closely examined the decline of great powers, not much attention has been paid to the question of their rise. The upward trajectory of China is a particularly puzzling case. How has it grown increasingly important in the world arena while lagging behind the United States and its allies across certain sectors? Borrowing ideas of political determinism from ancient Chinese philosophers, Leadership and the Rise of Great Powers explains China’s expanding influence by presenting a moral-realist theory that attributes the rise and fall of nations to political leadership. Yan Xuetong shows that the stronger a rising state’s political leadership, the more likely it is to displace a prevailing state in the international system.

Yan defines political leadership through the lens of morality, specifically the ability of a government to fulfill its domestic responsibility and maintain international strategic credibility. Examining leadership at the personal, national, and international levels, Yan shows how rising states like China transform the international order by reshaping power distribution and norms. Yan also considers the reasons for America’s diminishing international stature even as its economy, education system, military, political institutions, and technology hold steady. The polarization of China and the United States will not result in another Cold War scenario, but their mutual distrust will ultimately drive the world center from Europe to East Asia.

Using the lens of classical Chinese political theory, Leadership and the Rise of Great Powers offers a provocative, alternative perspective on the changing dominance of nations on the global stage.

Yan Xuetong is professor of political science and dean of the Institute of International Relations at Tsinghua University in Beijing. His many books include Ancient Chinese Thought, Modern Chinese Power (Princeton).

"[Leadership and the Rise of Great Powers] is written with clarity and vigour, and amply repays careful attention."—Rana Mitter, Financial Times

"In Leadership and the Rise of Great Powers, Yan Xuetong draws insights from Chinese history and philosophy to challenge international relations scholarship. Yan offers a powerful vision of a new bipolar world whose stability depends not on material power or norms, but on the quality of leadership exercised by China and the United States. A thoughtful and provocative book."—Amitav Acharya, American University, Washington, DC

"Yan Xuetong has been prominent in rethinking realist international relations theory in the light of classical Chinese political philosophy. In this important new book, he shows us what realist theory and world history look like from a Chinese perspective. A welcome and often challenging corrective to Eurocentric orthodoxies. There is nothing like this book on the market."—Barry Buzan, emeritus professor, London School of Economics

"This fascinating book represents the current thinking of an influential figure on some of the pressing questions of international politics."—Jonathan Kirshner, author of American Power after the Financial Crisis

"The rise and fall of hegemons, Yan Xuetong argues, is based not only on their power but also on the quality of their leadership. This compelling book advances key debates about the rise and decline of great powers, the nature and impact of soft power, and the crisis of liberalism."—Jennifer Lind, Dartmouth College

"In this riveting account of the rise and decline of global leadership, Yan Xuetong engages classical realism and Chinese philosophy to formulate a theory of moral realism. He applies this theory to the rise of China and the decline of the United States in a new bipolar world order without global leadership. A compelling contribution for understanding the current transformations of the international system."—Thomas Risse, Freie Universität Berlin

"In this thought-provoking book, Yan Xuetong proposes a Chinese theory of international relations that enriches realist literature and international relations theory. His distinct take has clear policy relevance and will generate much controversy and debate among scholars inside and outside of China. Offering insights not often found in the Western literature, this work will be widely read and cited."—Feng Zhang, Australian National University