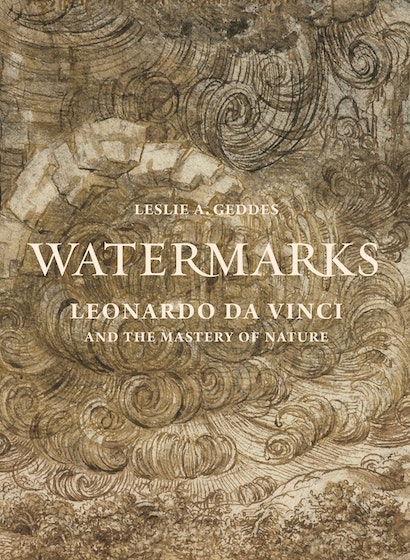 From drawings for mobile bridges and underwater breathing apparatuses to plans for water management schemes, Leonardo evinced a deep interest in the technical aspects of water. His visual studies of the ways in which landscape is shaped by water demonstrated both his artistic mastery and probing scientific mind. Analyzing Leonardo’s notebooks, plans, maps, and paintings, Geddes argues that, for Leonardo and fellow artists, drawing was a form of visual thinking and problem solving essential to understanding and controlling water and other parts of the natural world. She also examines the material importance in this work of water-based media, namely ink, watercolor, and oil paint.

A compelling account of Renaissance art and engineering, Watermarks shows, above all else, how Leonardo applied his pictorial genius to water in order to render the natural world in all its richness and constant change.

Leslie A. Geddes is assistant professor of art history at Tulane University.

"One cannot help admiring how, through her own fertile processes of thought and analogy, Geddes mirrors the astonishing liveliness of Leonardo’s creative imagination."—Francis Ames-Lewis, Burlington Magazine

"Compelling. . . . an exciting addition to the new field of the environmental humanities."—Choice

"A timely invitation to a close reading of Leonardo’s drawings, not as a purely artistic medium but also as a versatile means of engaging with nature."—Anatole Tchikine, Renaissance Quarterly

“This is an outstanding and penetrating study on Leonardo da Vinci's vast and fascinating body of work on water. Watermarks will be of great interest to Leonardo scholars and to art historians interested in drawing and in the early modern period.”—Francesca Fiorani, University of Virginia