The definitive single-volume compendium of all things Princeton 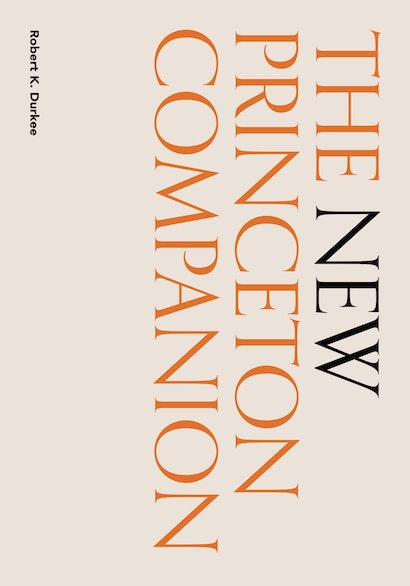 The New Princeton Companion is the ultimate reference book on Princeton University’s history and traditions, personalities and key events, and defining characteristics and idiosyncrasies. Robert Durkee brings a unique insider’s perspective to the school’s dramatic transformation over the past five decades, showing how it has become more multicultural, multiracial, and multinational, all the while advancing its distinctive academic mission.

Featuring more than 400 entries presented alphabetically, this wide-ranging collection covers topics from academic departments, cultural resources, and student organizations, hoaxes, and pranks to athletic teams, the town of Princeton, and university presidents. There are entries on coeducation, women, people of color, traditionally underrepresented groups, the diversification of campus iconography, and the protest activity that helped to usher in many of these changes. This marvelous compendium also includes annotated maps tracing the growth of the campus over more than two and a half centuries, lists ranging from prizewinners of many kinds to Olympic medalists, and an illustrated calendar that highlights something that happened in Princeton’s history on every day of the year.

Now completely updated, revised, and expanded from the classic 1978 edition, The New Princeton Companion tells you virtually everything there is to know about this remarkable institution of higher learning, revealing what it stands for, what it aspires to, and how it evolved from a tiny colonial college to one of the most acclaimed research universities in the world.

Robert K. Durkee served as Princeton’s vice president for public affairs from 1978 to 2018 and as vice president and secretary from 2004 to 2019. As a Princeton undergraduate during the campus upheavals of the late 1960s, he was an award-winning reporter and editor-in-chief at the Daily Princetonian and a columnist for the Princeton Alumni Weekly.

“Only someone who knows and loves Princeton as much as Bob Durkee could have written this book. The New Princeton Companion is rich in history and chock full of little nuggets that will surprise and delight you. Anyone interested in Princeton should own a copy. The book answers thousands of questions and offers unexpected pleasures.”—Bill Bradley ’65, Basketball Legend, Former United States Senator and Princeton Trustee, and Managing Director of Allen & Company

“The New Princeton Companion is an invaluable contribution to the university community. With his unique insight into Princeton, Bob Durkee has collected an intimate history of the university and the people who made this institution what it is today. Anyone seeking to understand Princeton will find what they’re looking for in this skillfully composed and comprehensive volume.”—Marcia Brown ’19, Former Editor-in-Chief of the Daily Princetonian and Correspondent for The Capitol Forum

“I can’t think of a better person to update and expand such a massive compendium of material than Bob Durkee. From his days as a Prince reporter through his forty-seven-year career in Nassau Hall, he has seen (or fact-checked) it all. His keen eye for editing has resulted in an endearing and useful reference that is a delightful sampling of all things Princeton. As an emeritus trustee, I especially recommend this book to all current and future trustees, as it provides invaluable context for many of the board’s deliberations, and lots of fun facts to share with others!”—Brent Henry ’69, Health Care Lawyer, Former Vice Chair of the Princeton Board of Trustees, and Former President of the Alumni Association

“In a feat of graceful compression, Bob Durkee locates in one place all the information that anyone interested in Princeton might want to consult. A labor of love, The New Princeton Companion is a careful, serious endeavor in which scholars can have confidence.”—Randy Kennedy ’77, Harvard Law School Professor and Former Princeton Trustee

“Everything you ever wanted to know about Princeton University is at your fingertips from the man who monitored the pulse of the university for nearly half a century. The New Princeton Companion is an alphabetical reference text of entries from ‘a cappella’ to ‘Wu Hall,’ and also a highly readable series of stories from beginning to end. A must for any Princeton aficionado!”—Nancy Newman ’78, Emory University Professor and Director of Neuro-Ophthalmology, Former Chair of the Princeton Trustee Committee on Alumni Affairs, and Former President of the Princeton Alumni Association

“The New Princeton Companion is an extraordinary treasure trove of insight and information—past, present, and even future—that will satisfy the curiosity of both the casual reader and the serious scholar with interests in the ‘Best Old Place of All.’ It has been beautifully compiled by Bob Durkee ’69, and it includes important new additions on topics such as the history of the physical campus, the modifications to the informal motto, and the reconsideration of the legacy of Woodrow Wilson.”—Shirley Tilghman, Nineteenth President of Princeton University and Emeritus Professor of Molecular Biology and Public Affairs