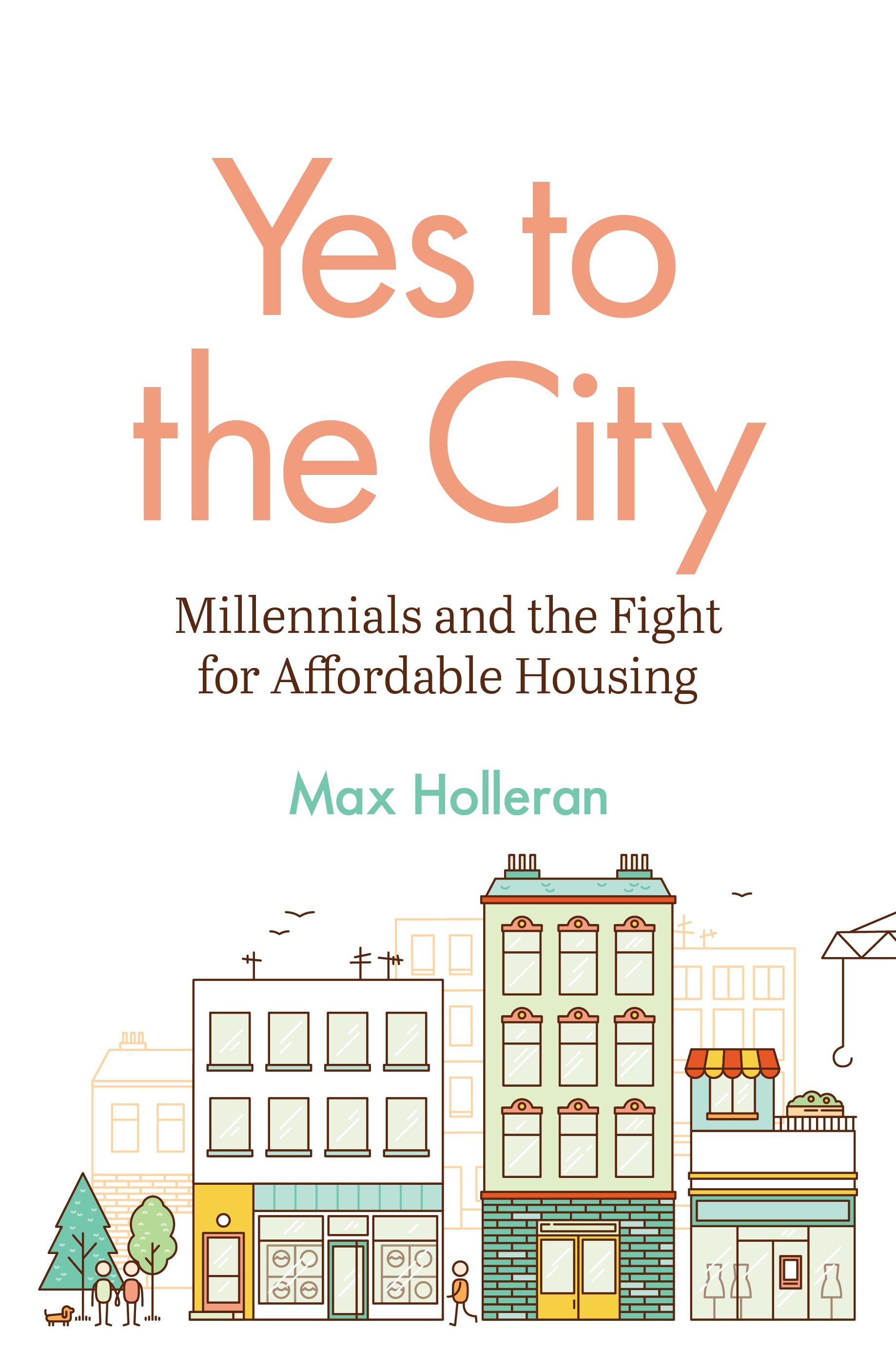 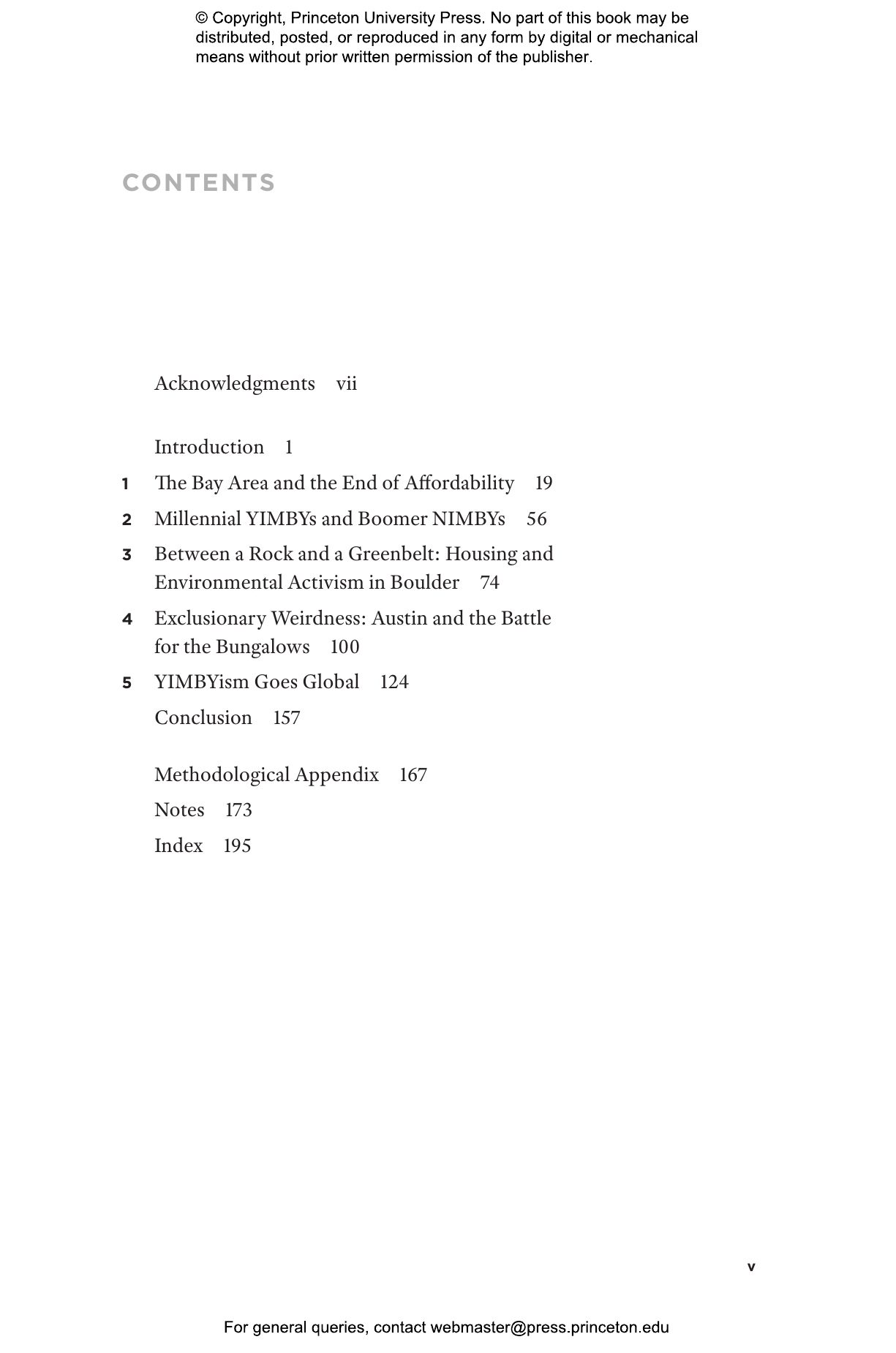 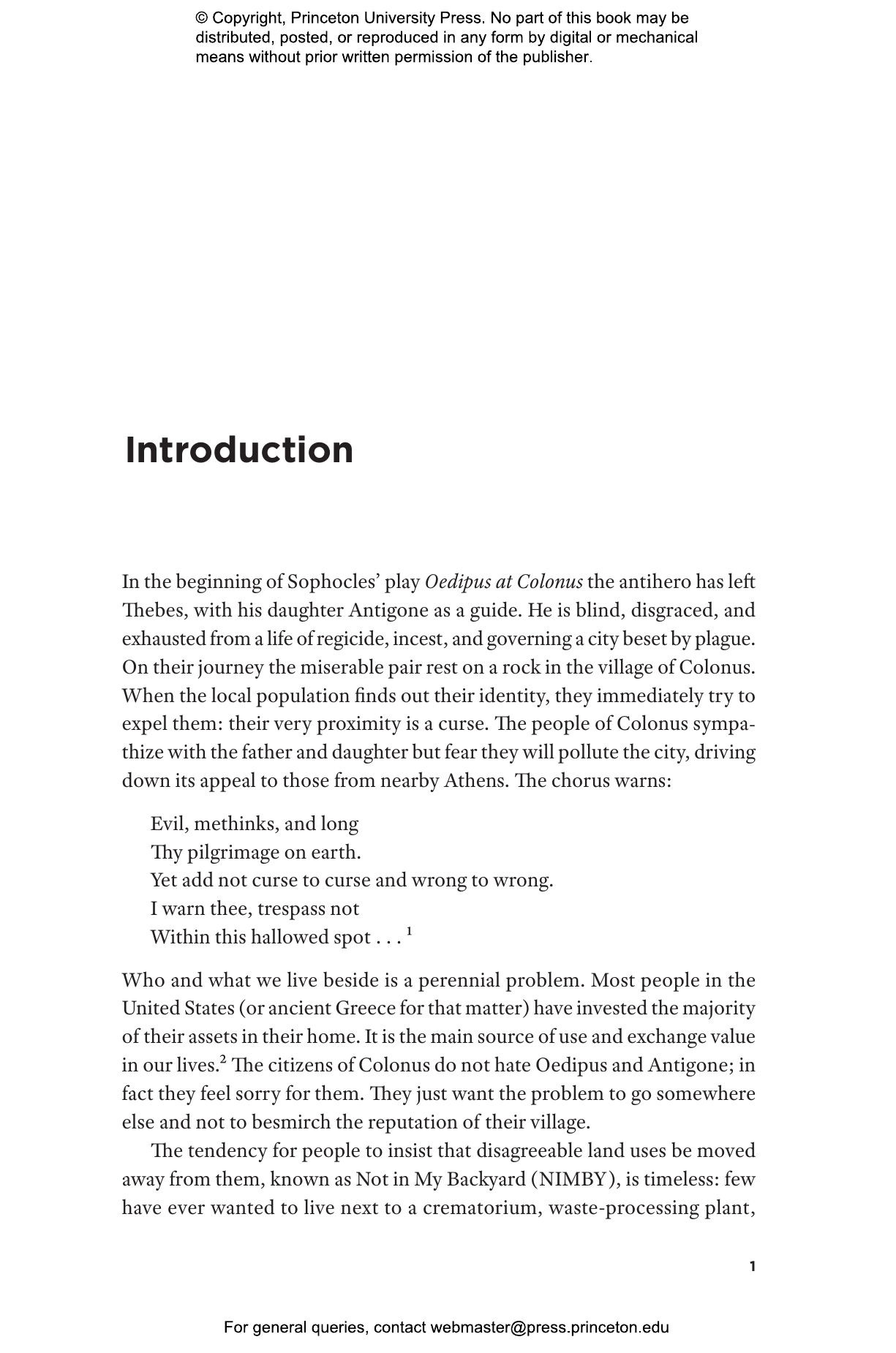 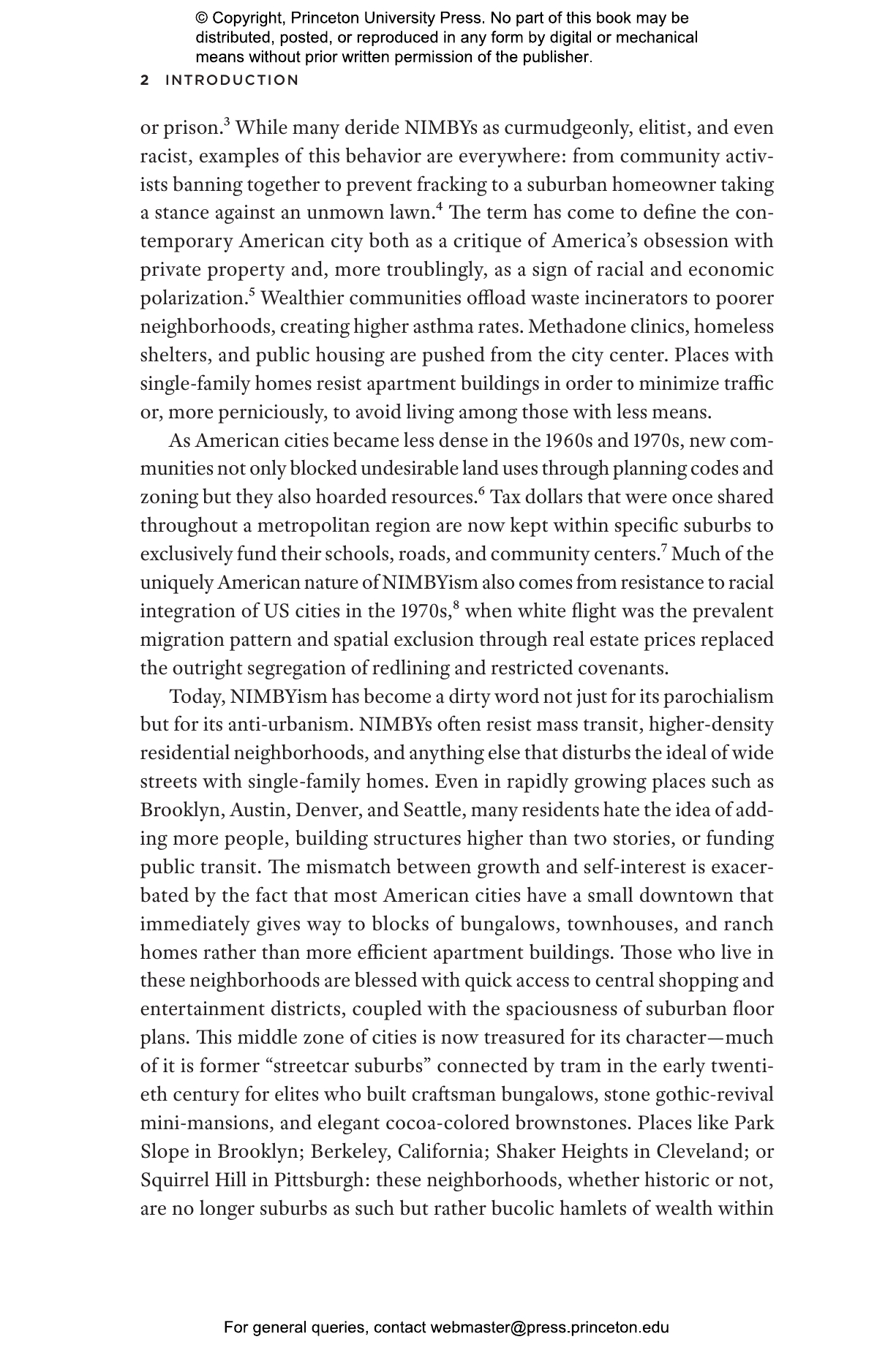 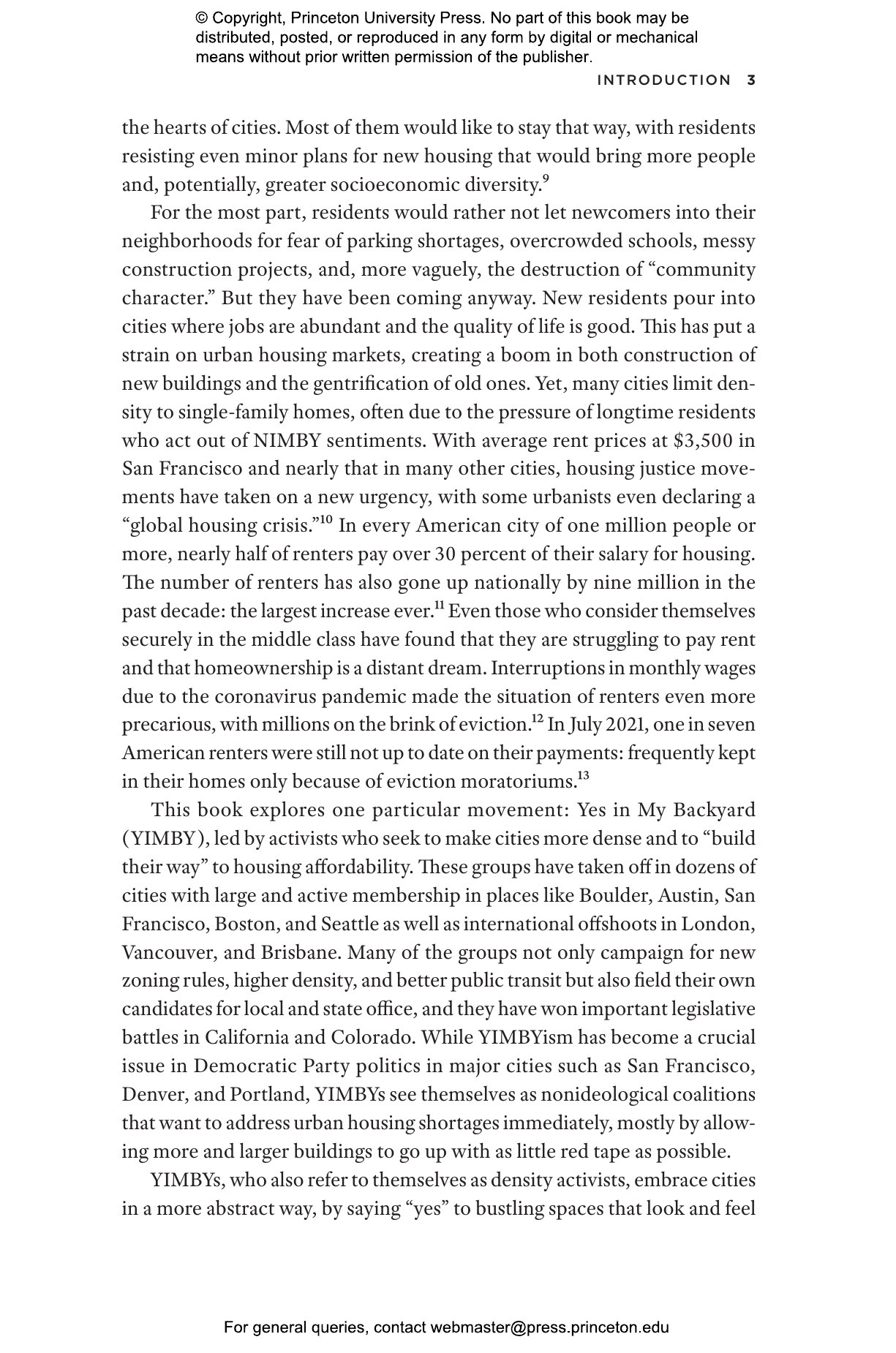 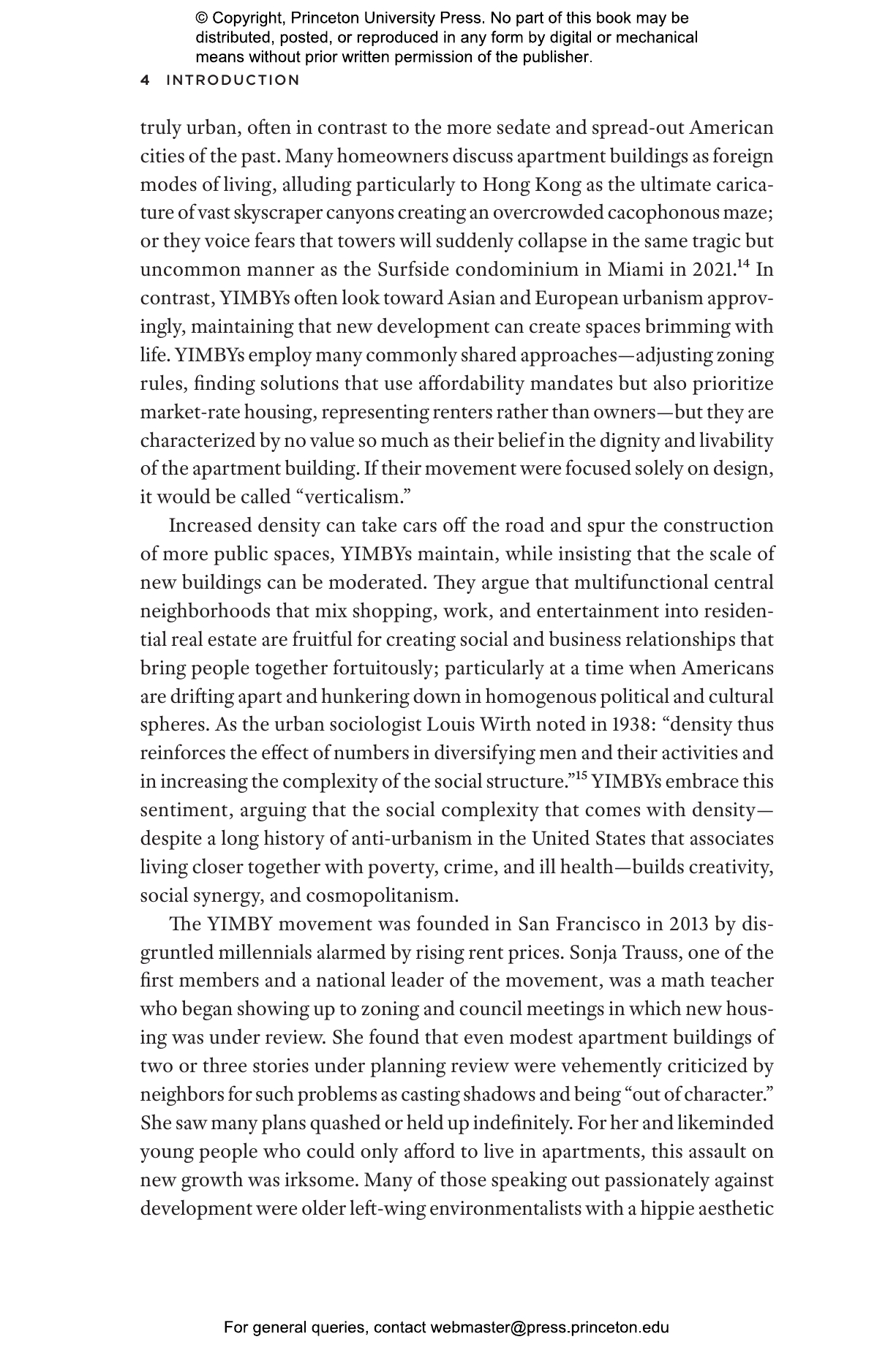 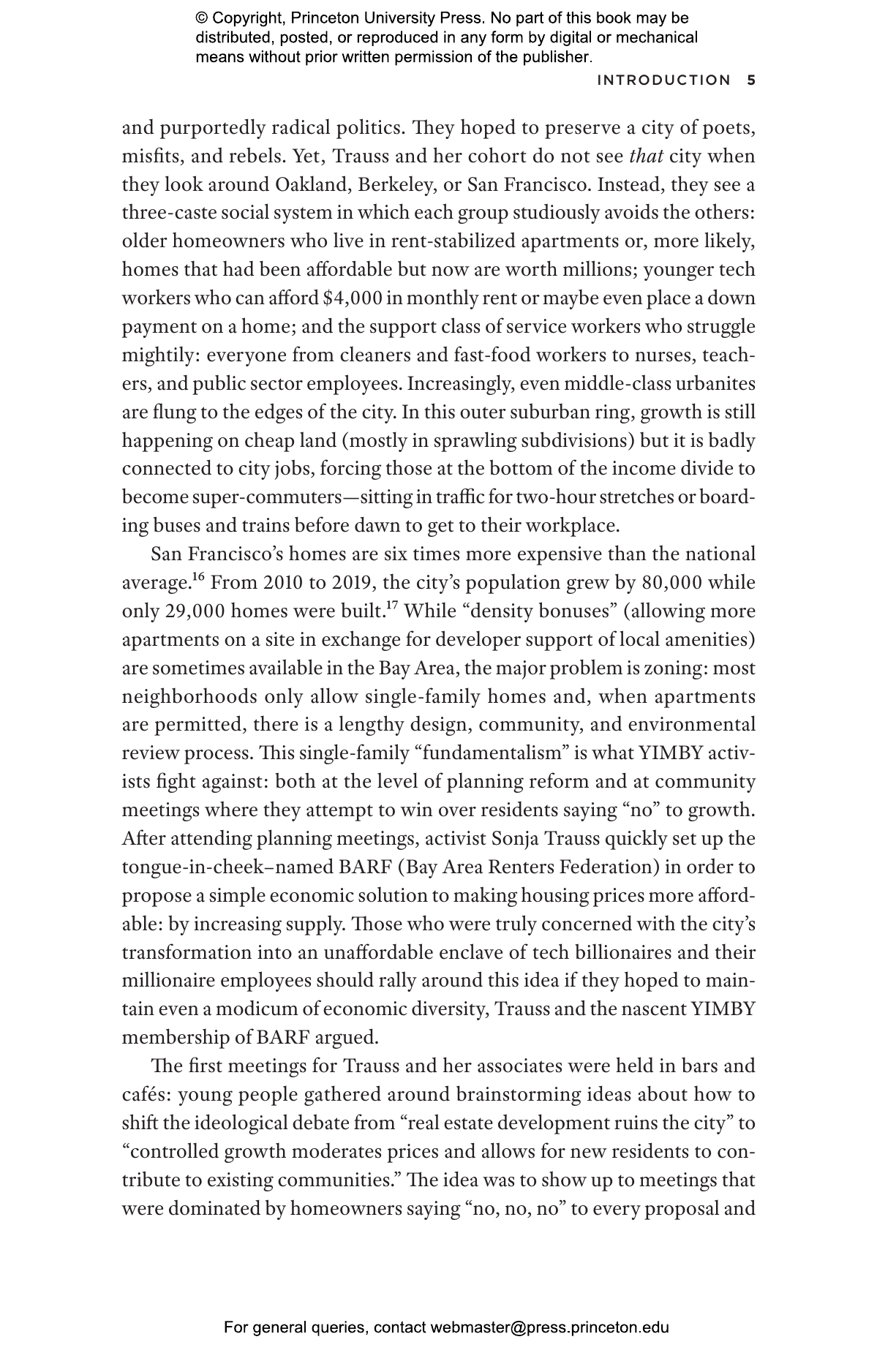 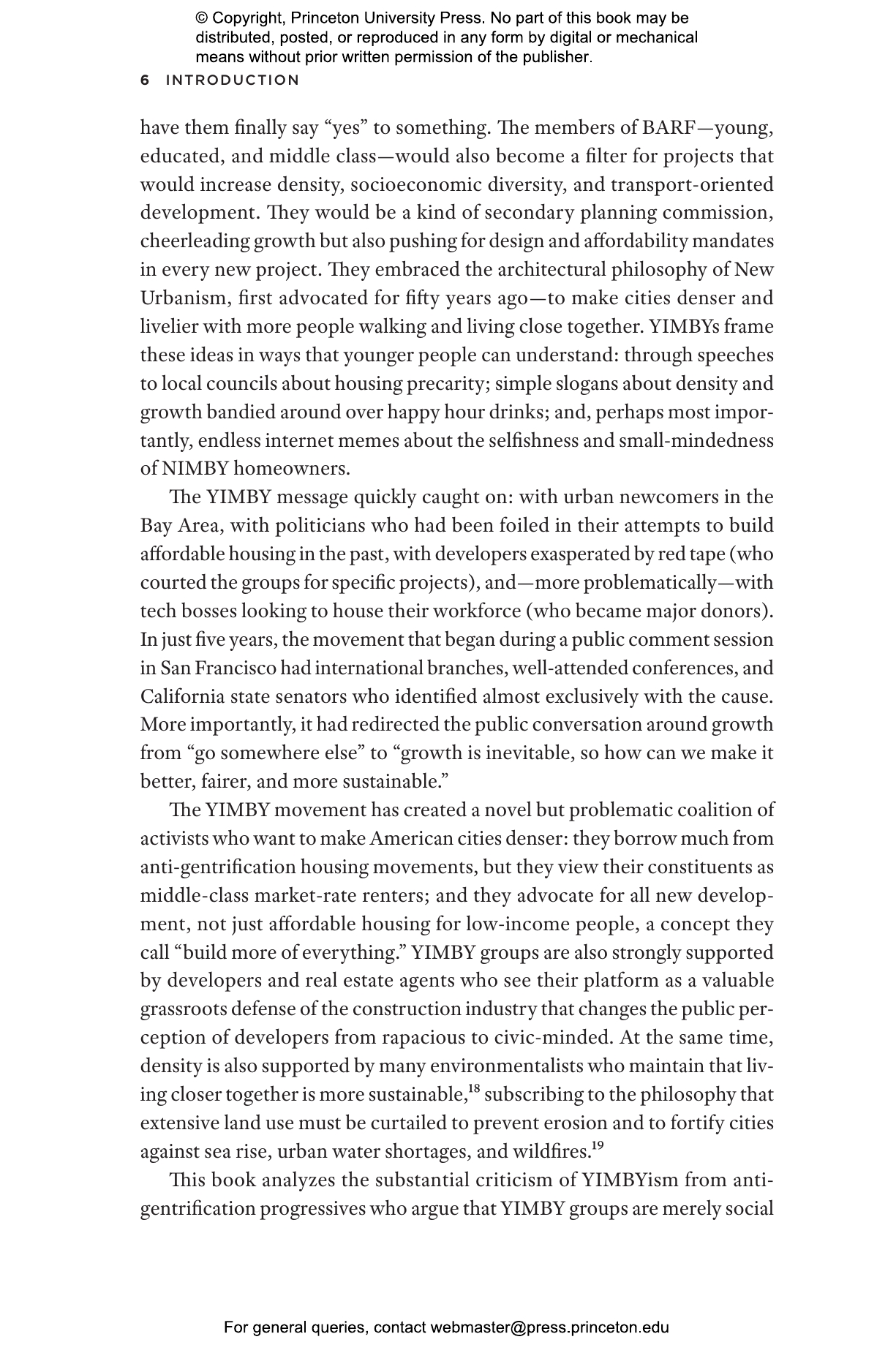 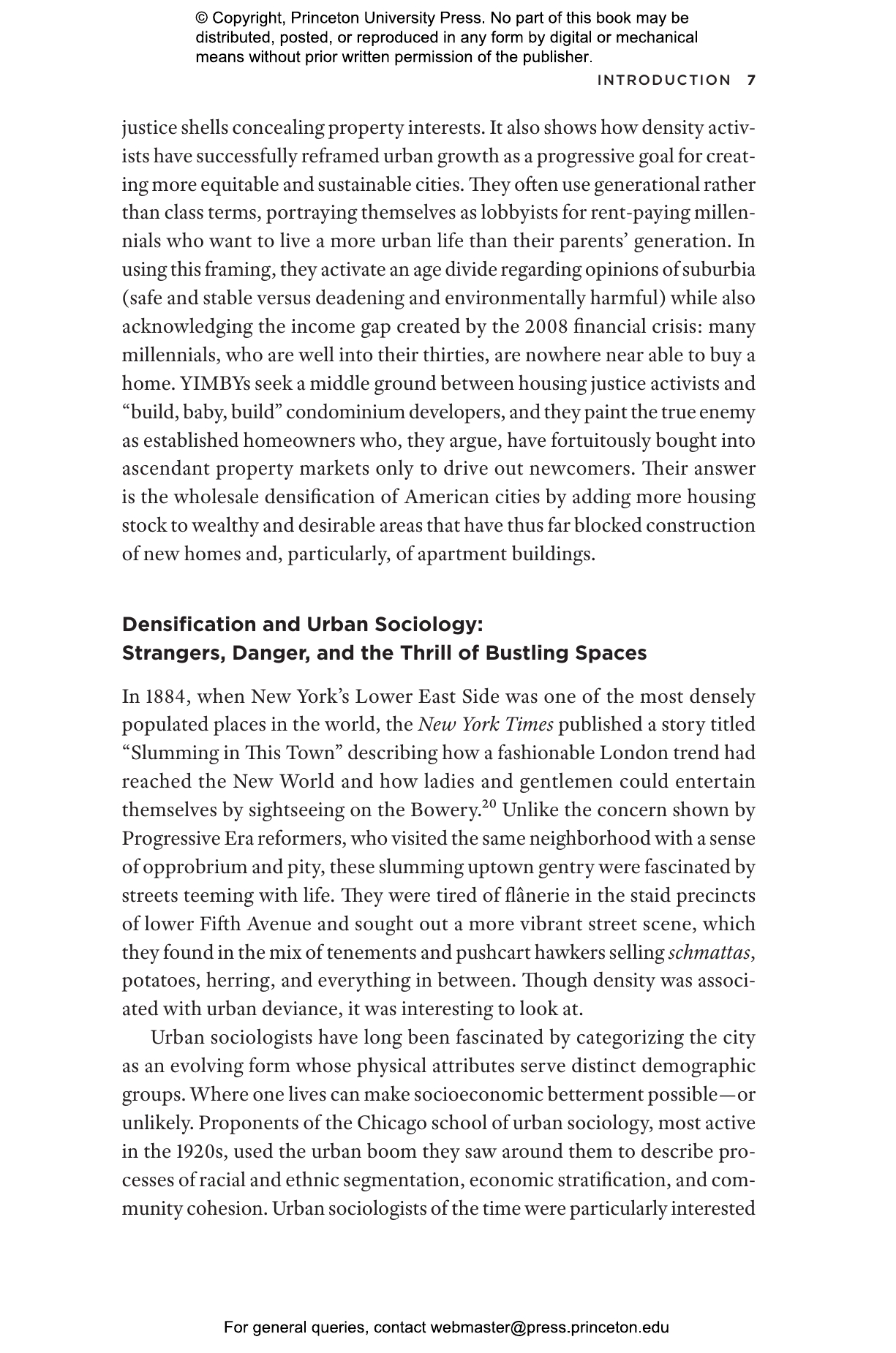 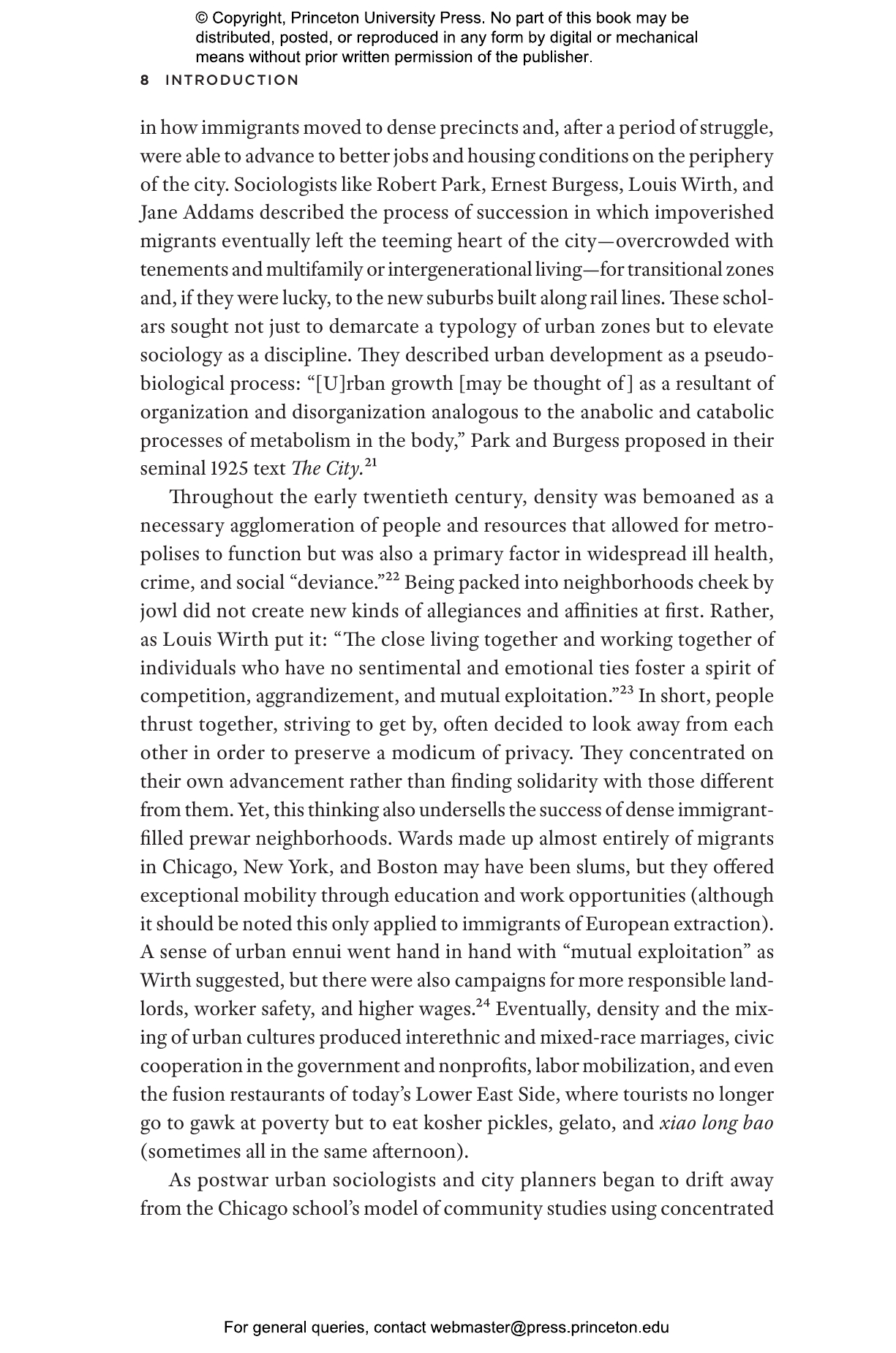 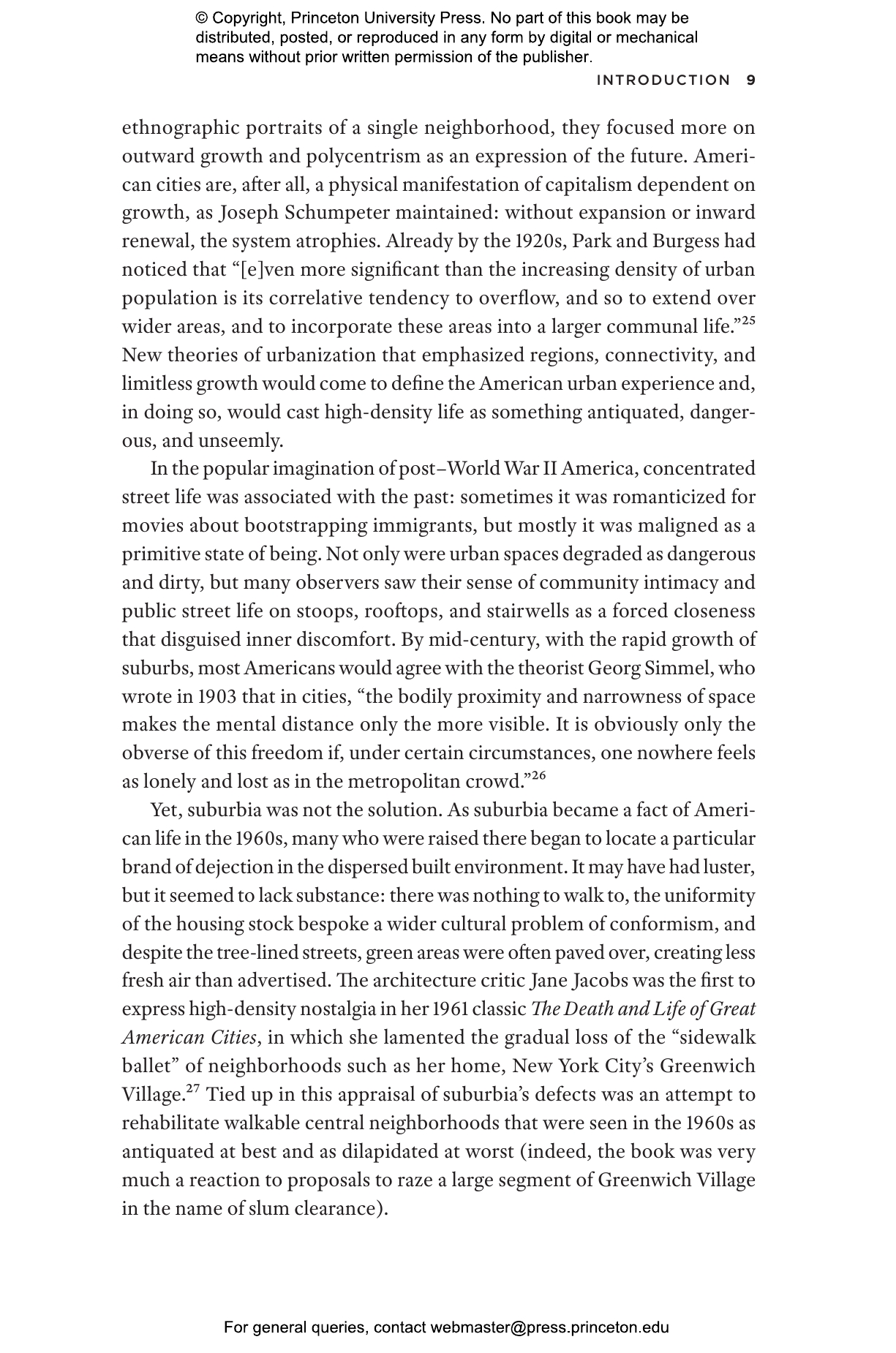 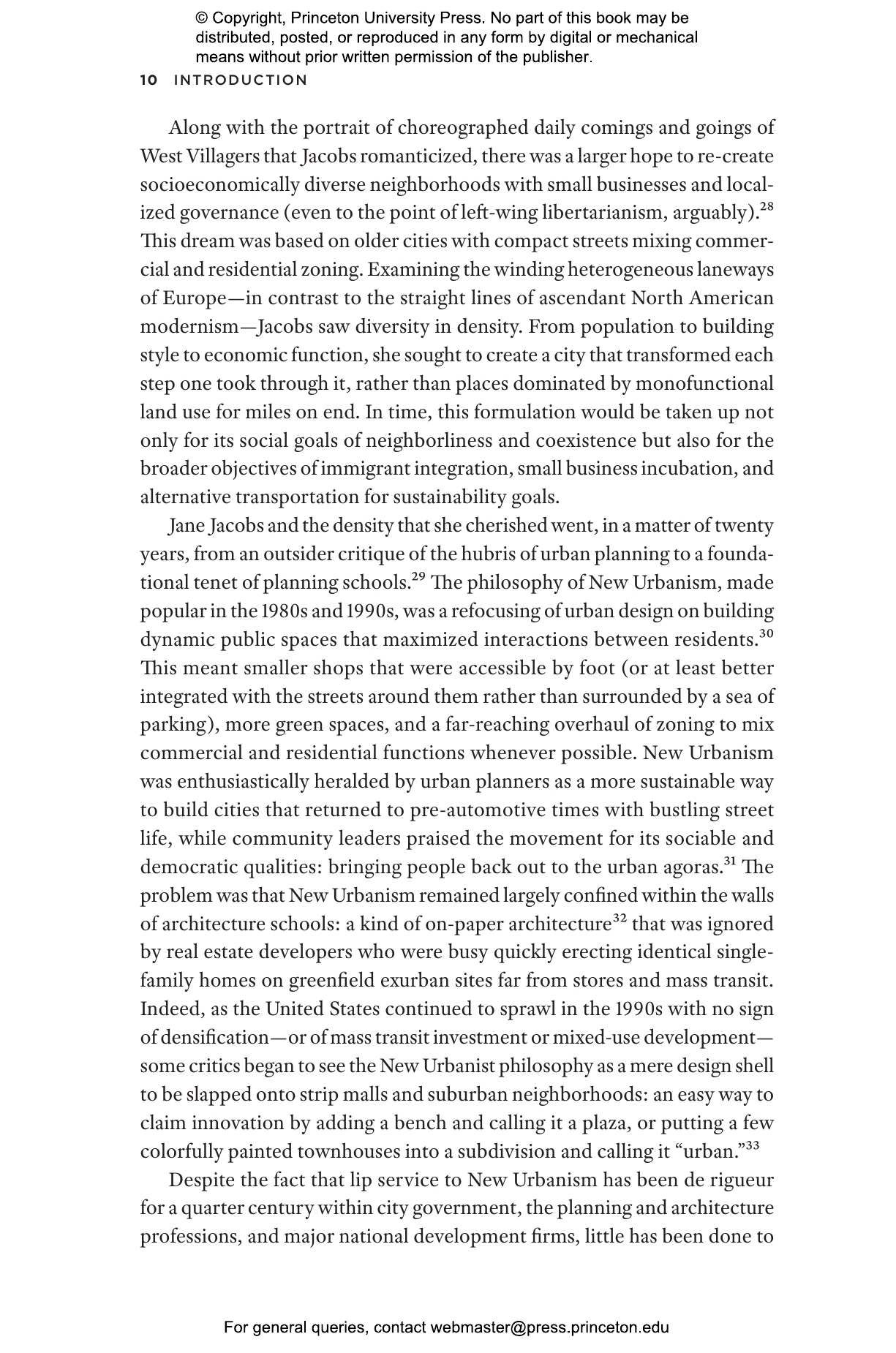 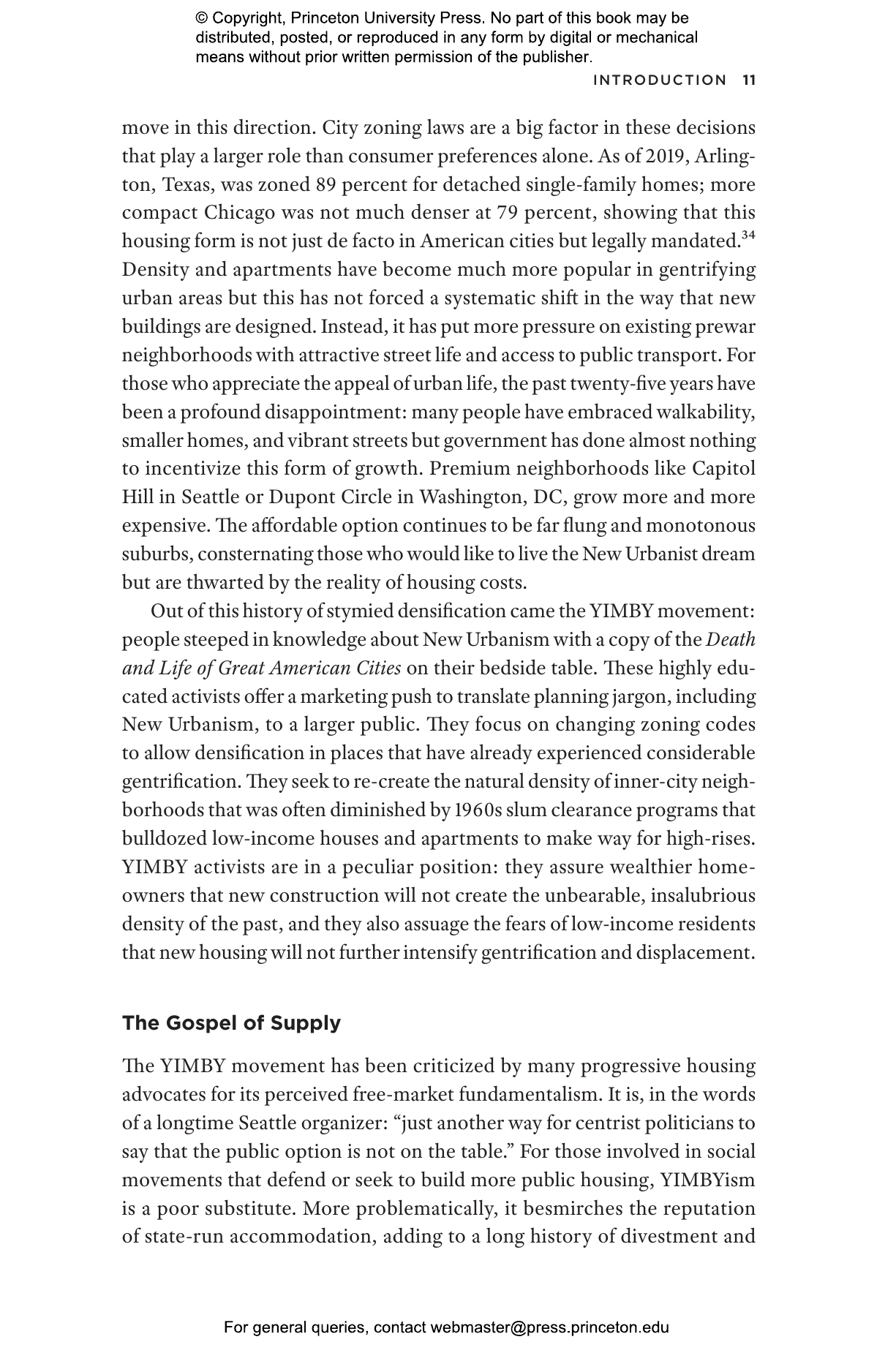 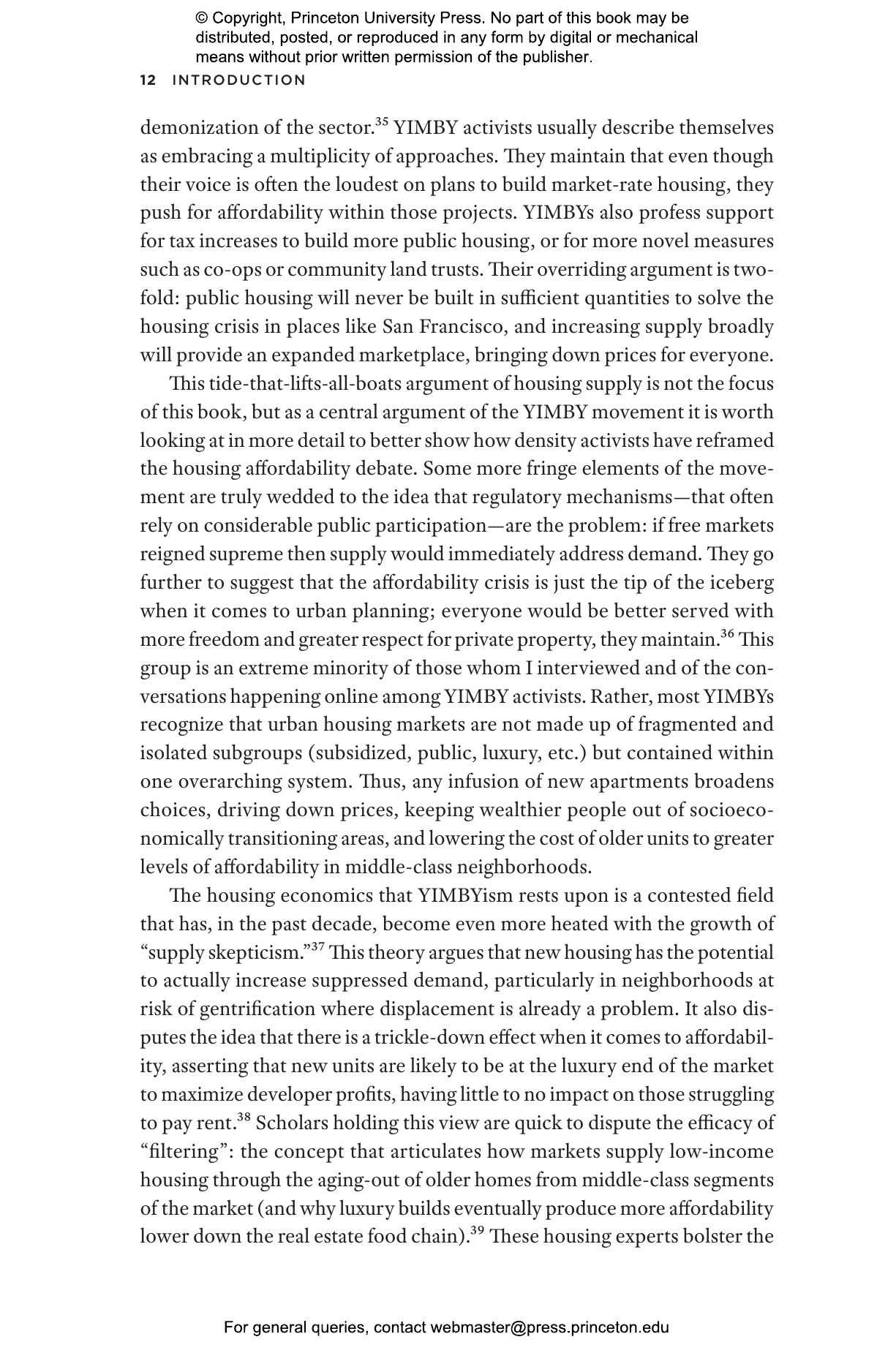 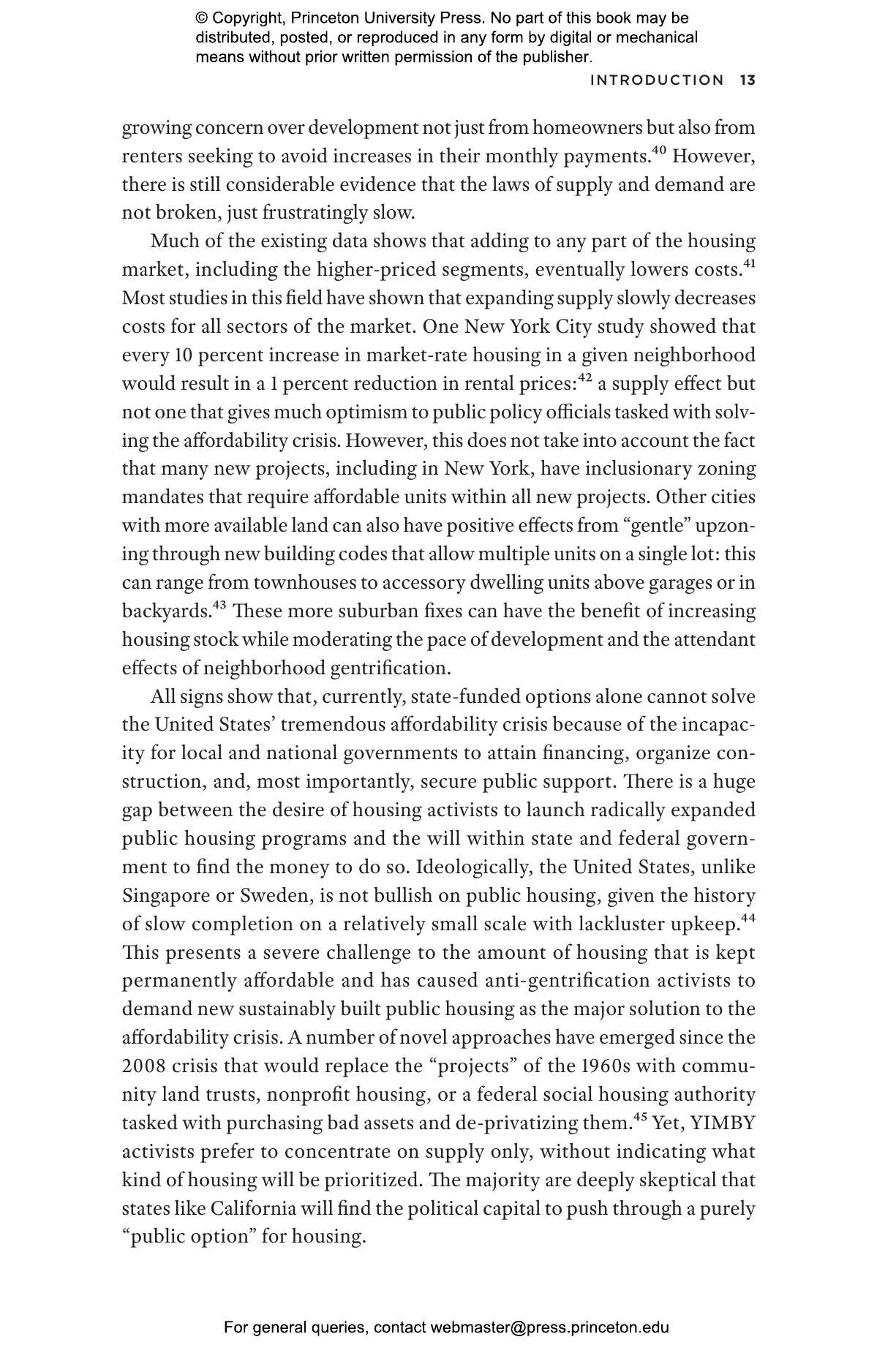 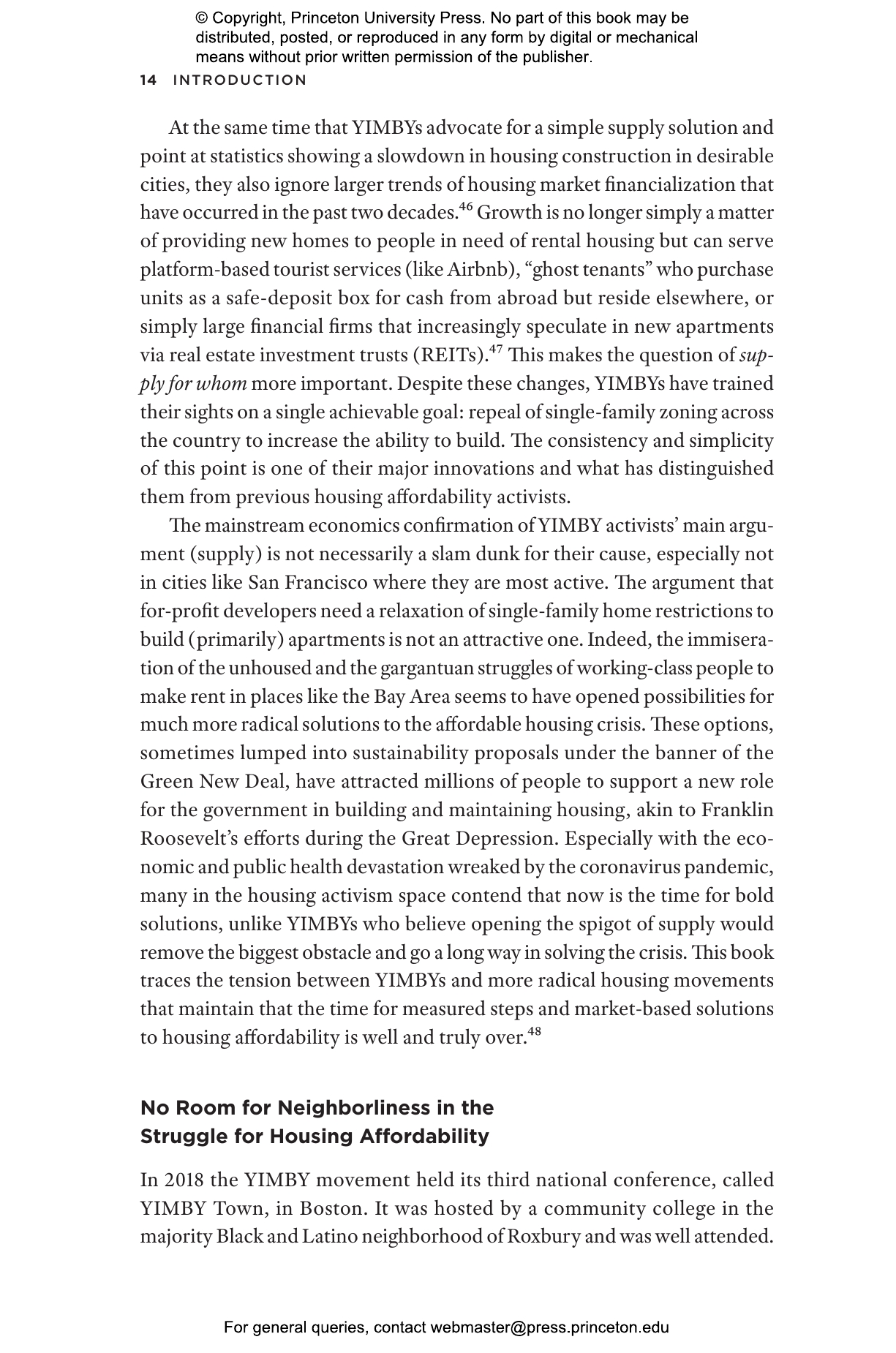 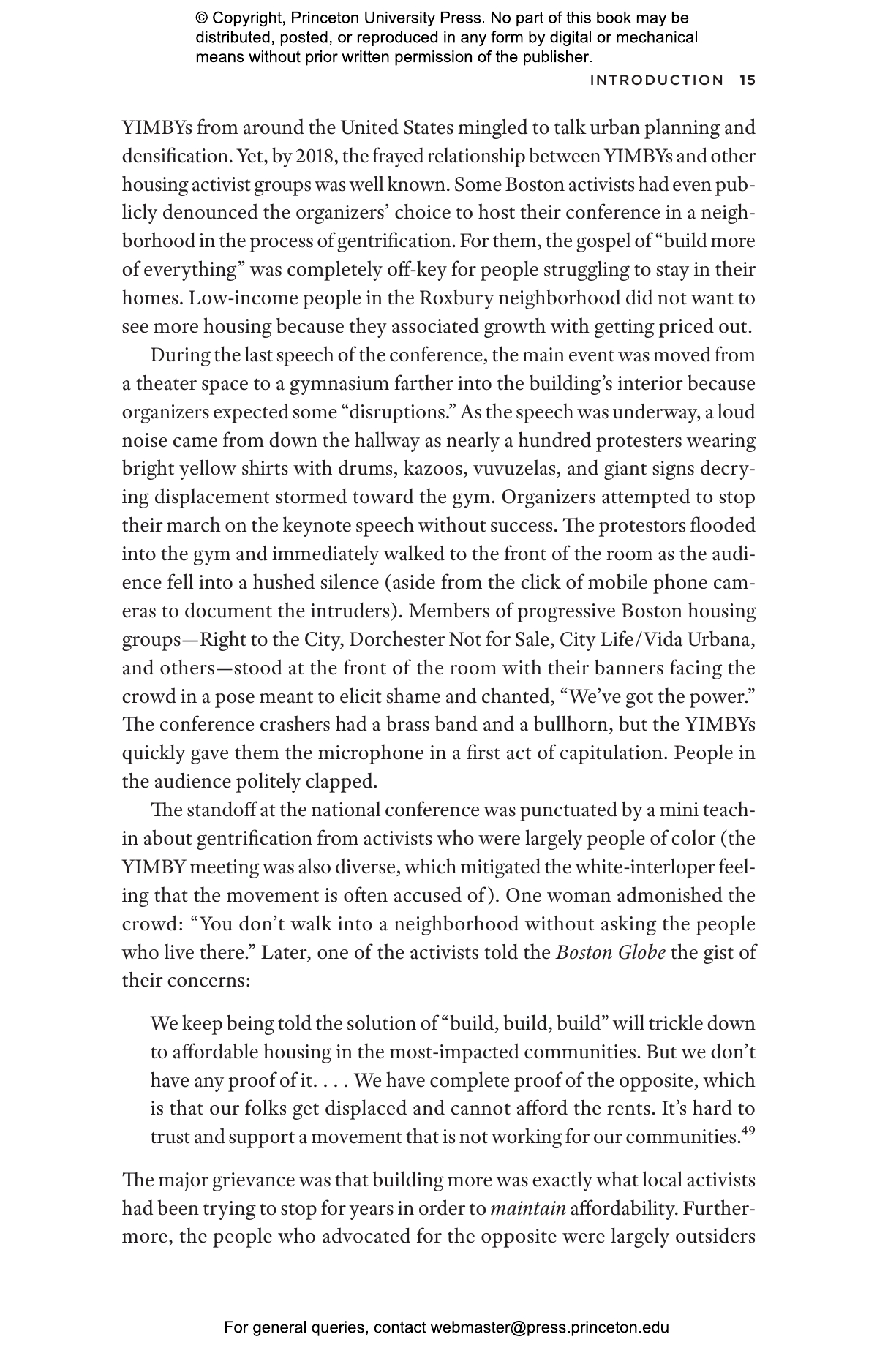 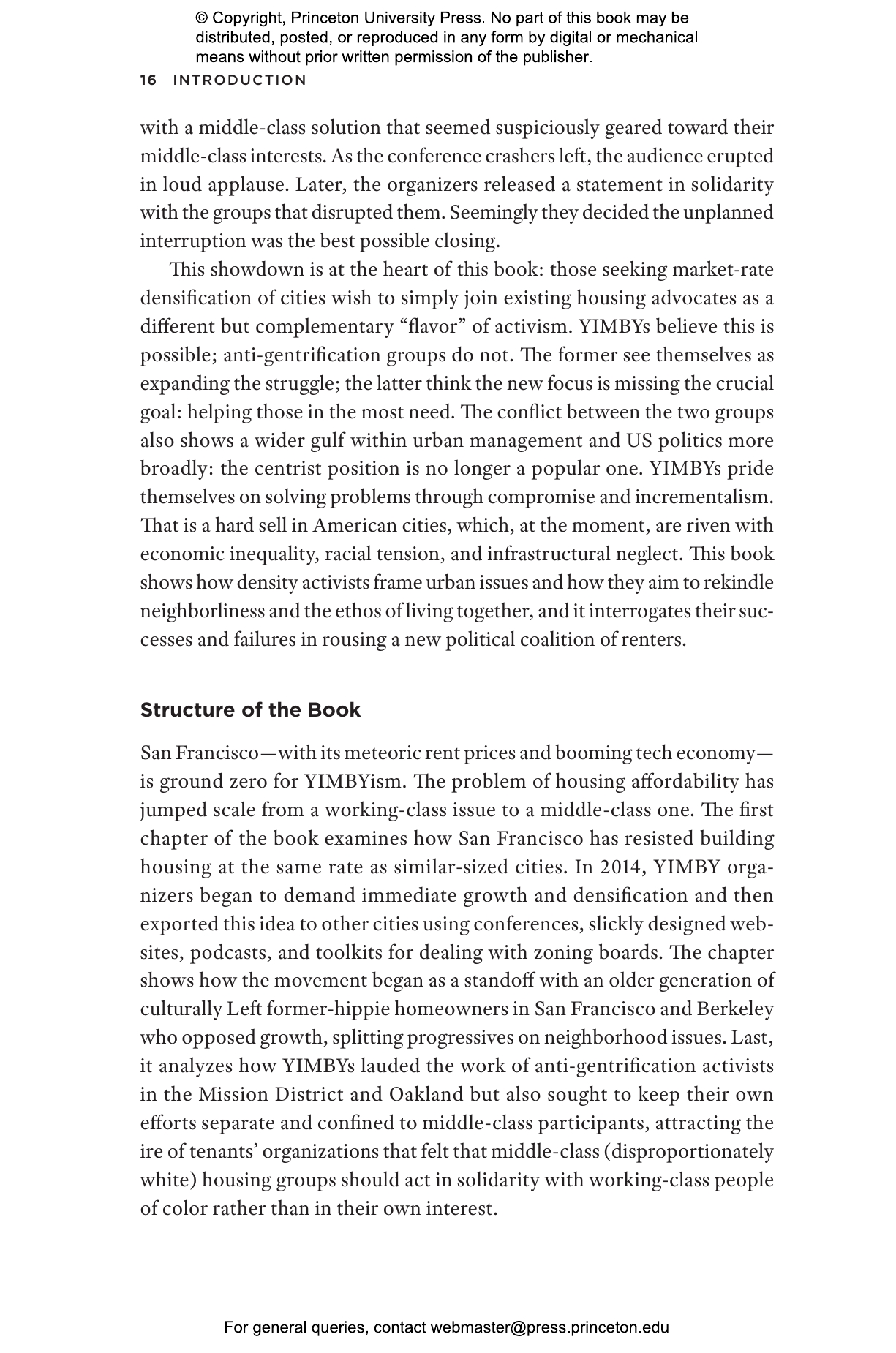 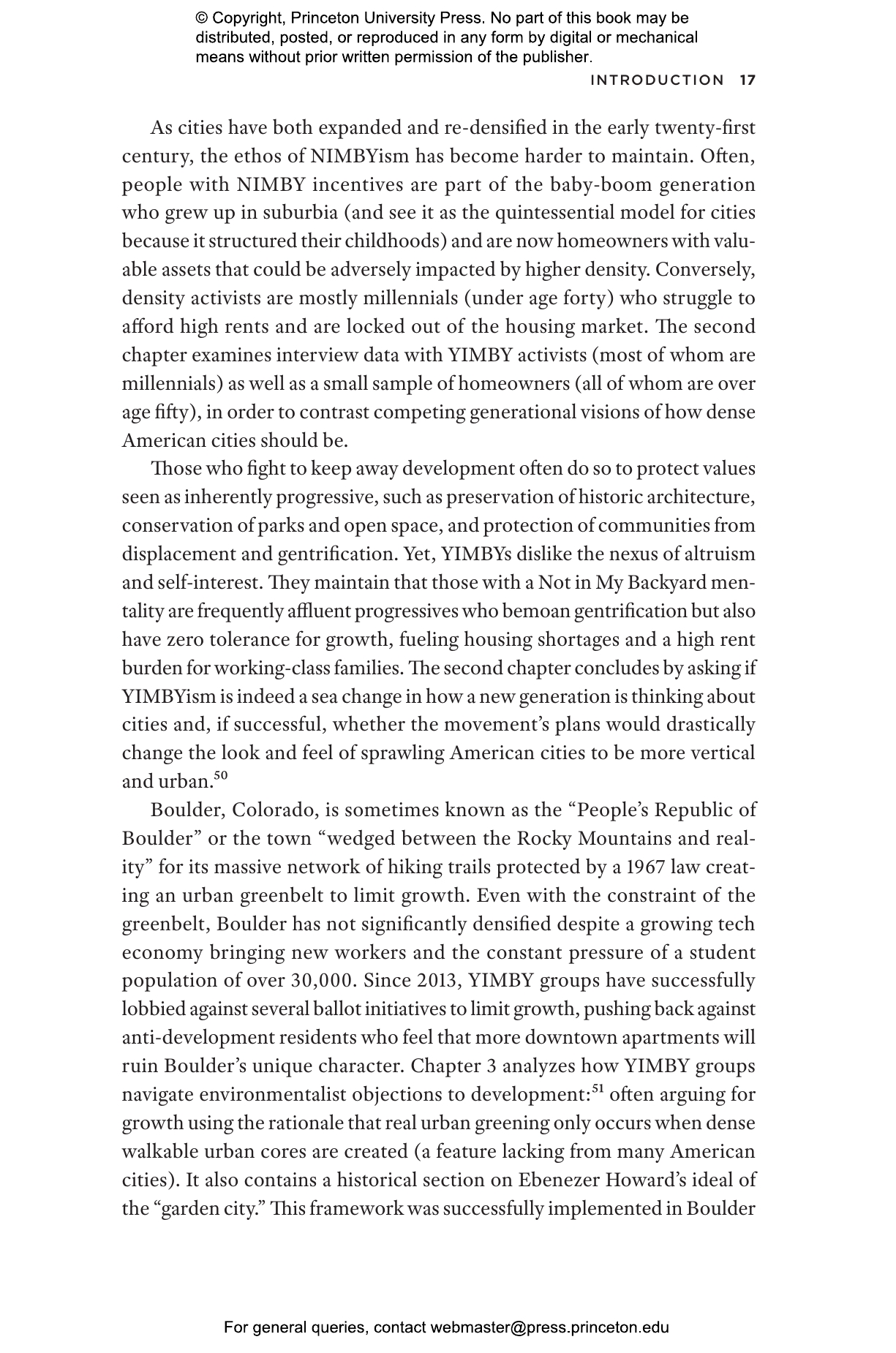 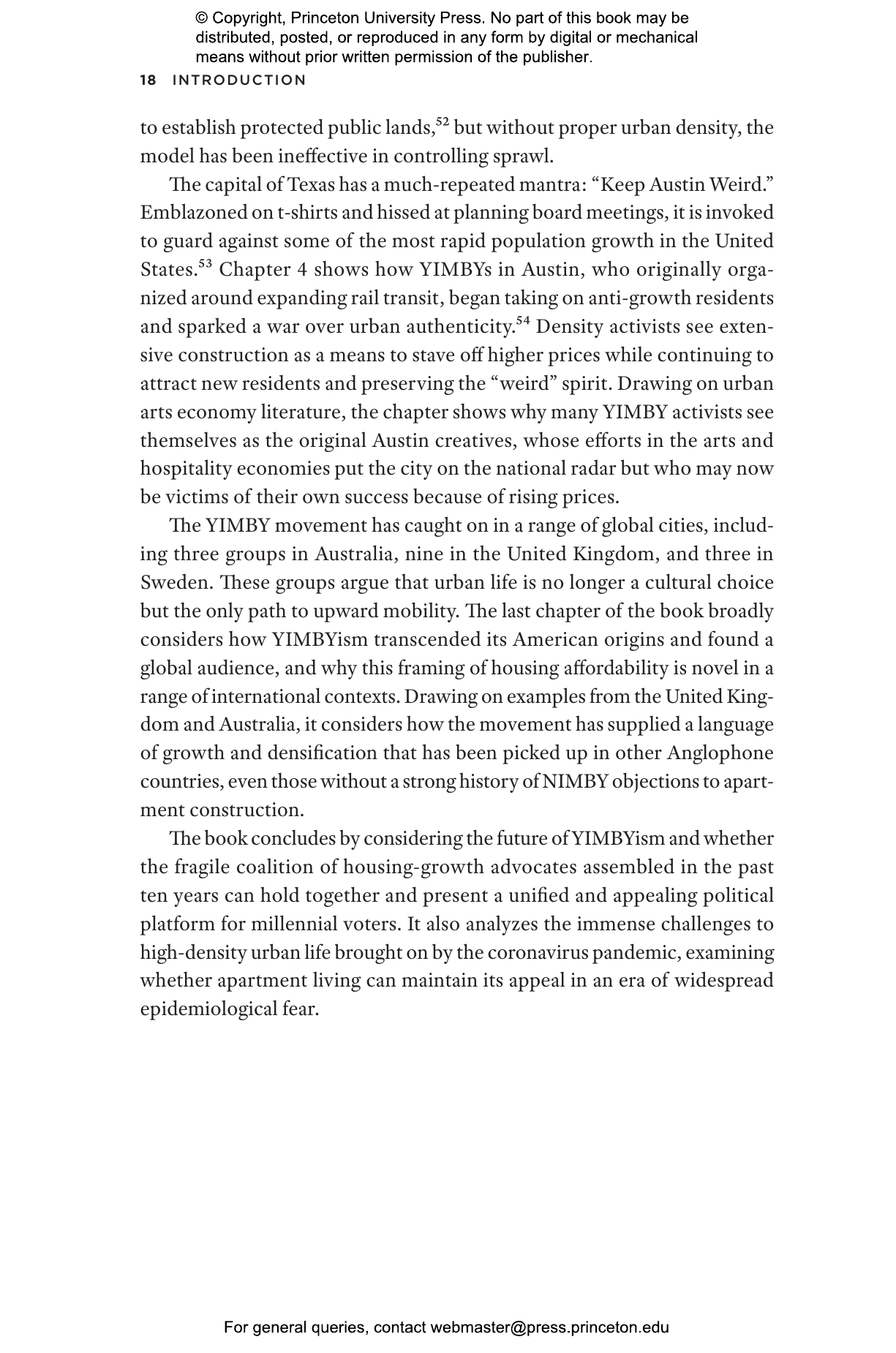 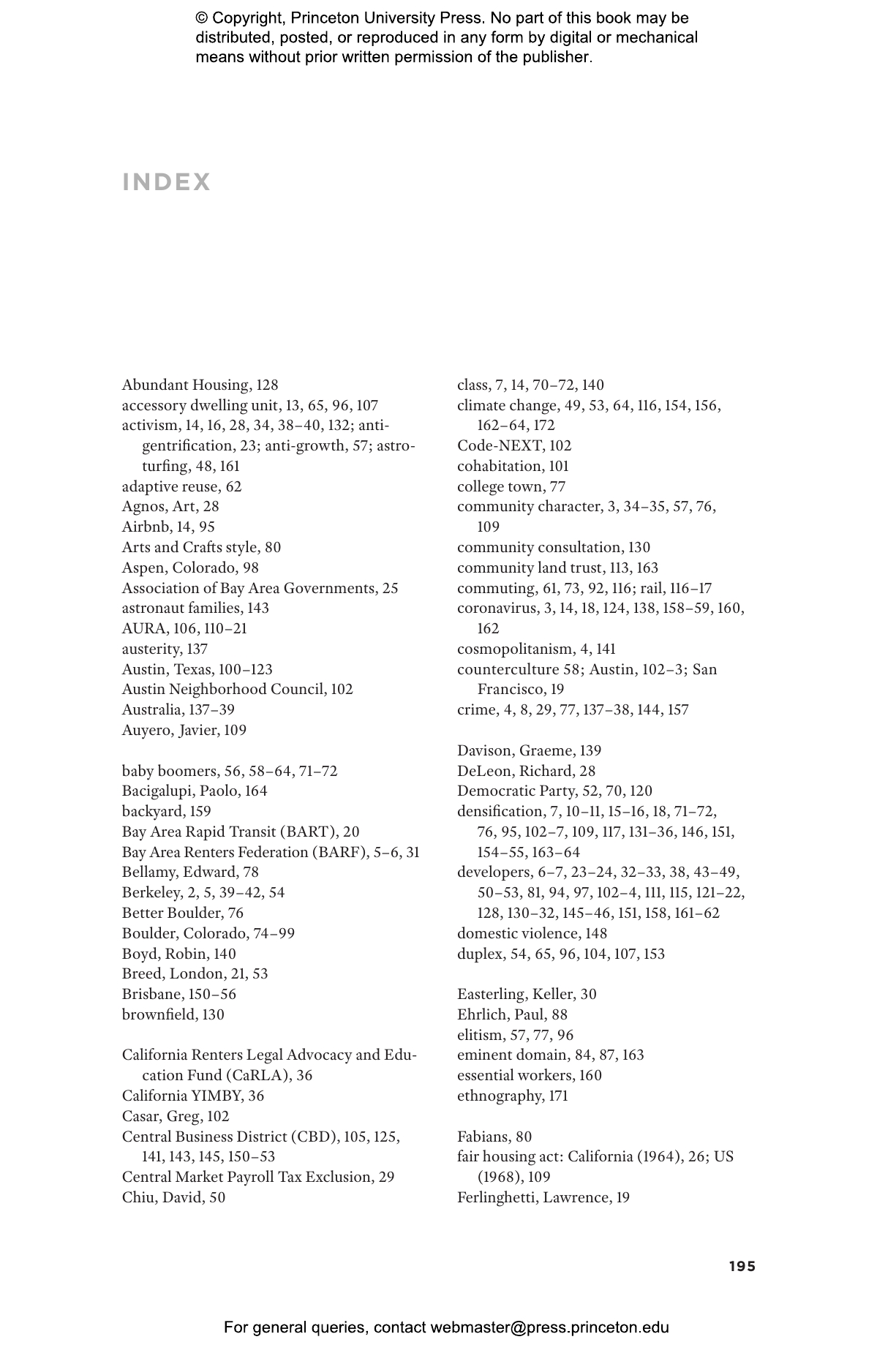 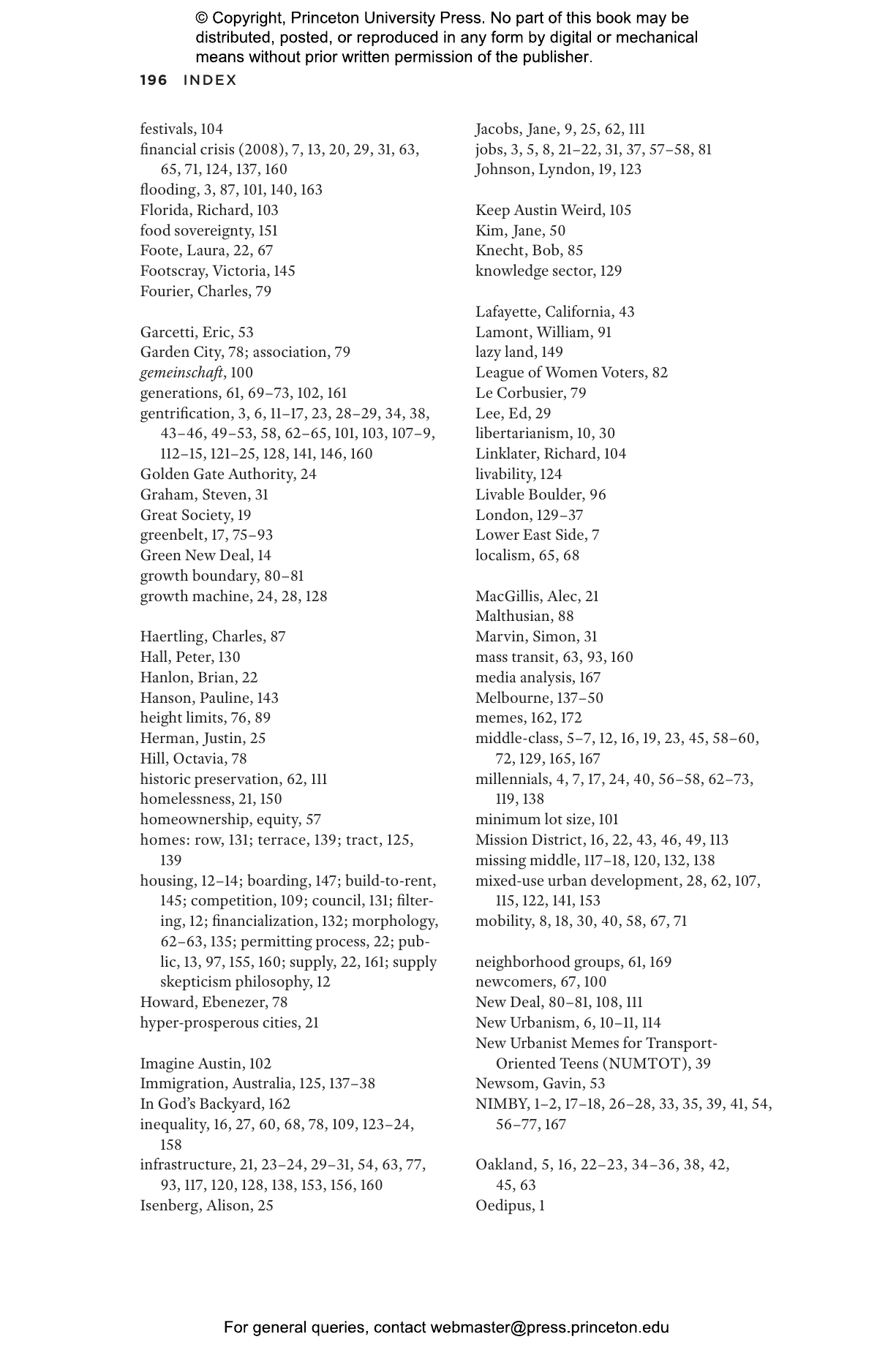 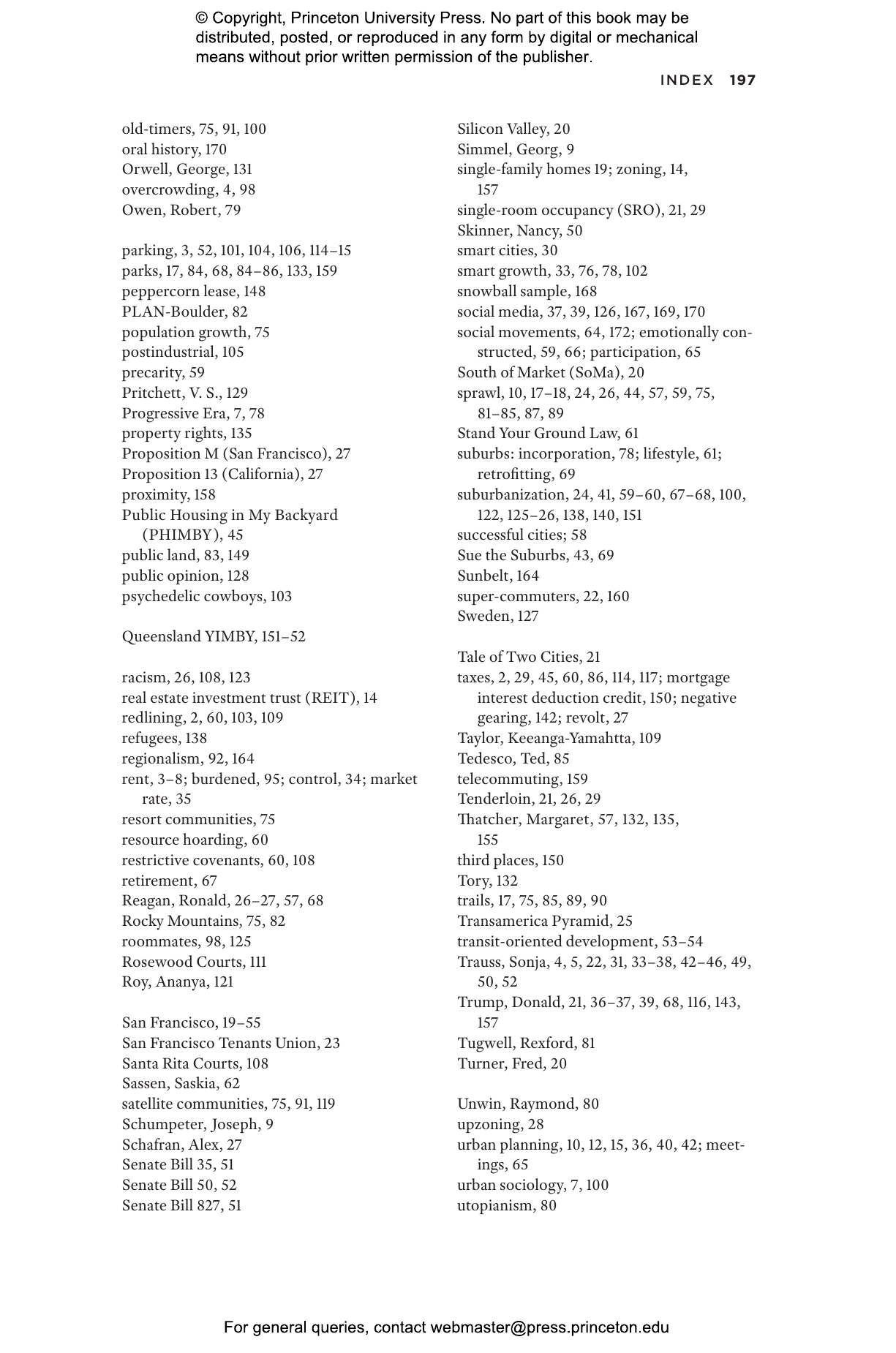 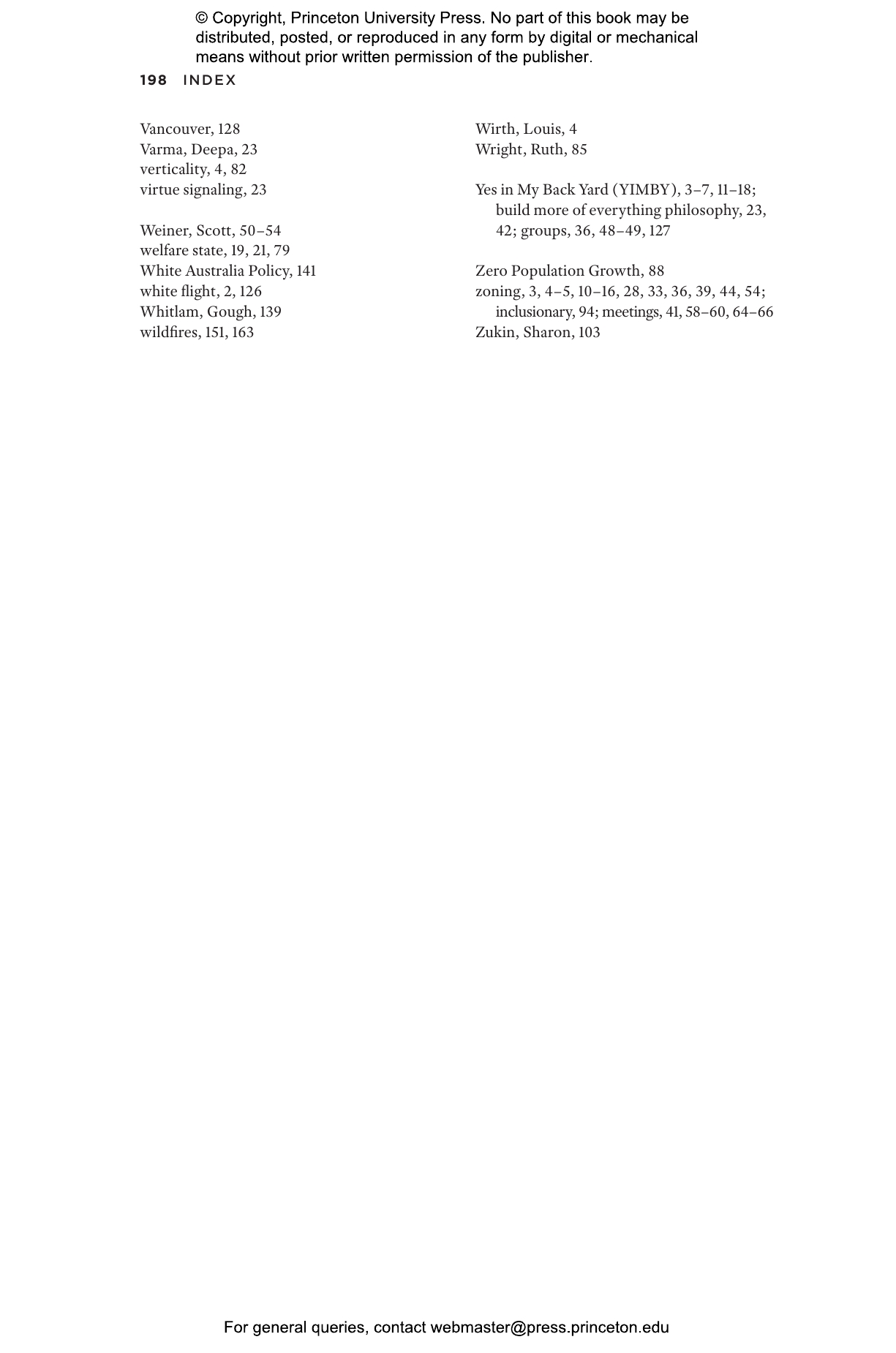 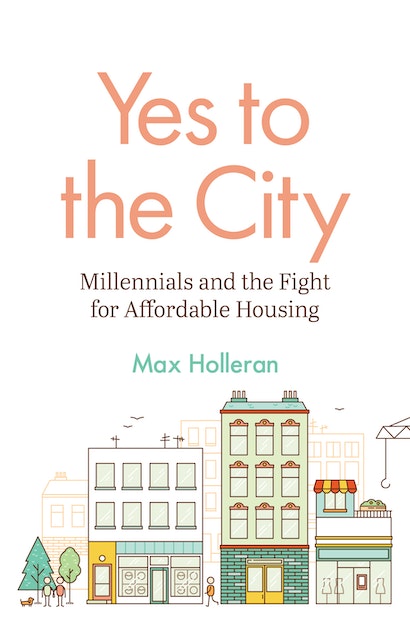 The exorbitant costs of urban housing and the widening gap in income inequality are fueling a combative new movement in cities around the world. A growing number of influential activists aren’t waiting for new public housing to be built. Instead, they’re calling for more construction and denser cities in order to increase affordability. Yes to the City offers an in-depth look at the “Yes in My Backyard” (YIMBY) movement. From its origins in San Francisco to its current cadre of activists pushing for new apartment towers in places like Boulder, Austin, and London, Max Holleran explores how urban density, once maligned for its association with overpopulated slums, has become a rallying cry for millennial activists locked out of housing markets and unable to pay high rents.

Holleran provides a detailed account of YIMBY activists campaigning for construction, new zoning rules, better public transit, and even candidates for local and state office. YIMBY groups draw together an unlikely coalition, from developers and real estate agents to environmentalists, and Holleran looks at the increasingly contentious battles between market-driven pragmatists and rent-control idealists. Arguing that advocates for more housing must carefully weigh their demands for supply with the continuing damage of gentrification, he shows that these individuals see high-density urbanism and walkable urban spaces as progressive statements about the kind of society they would like to create.

Chronicling a major shift in housing activism during the past twenty years, Yes to the City considers how one movement has reframed conversations about urban growth. 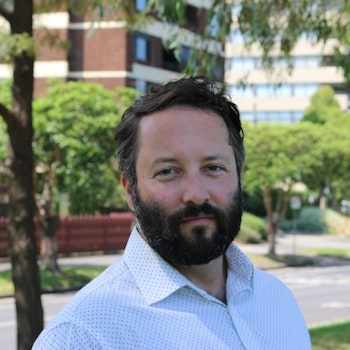 "Yes to the City: Millennials and the Fight for Affordable Housing focuses on the fascinating conflict between Yimbys and some more-progressive groups, including old-line environmentalists and community activists. . . . You don’t need to agree with all of Mr. Holleran’s policy perspectives to appreciate his keen grasp of the progressive forces aligned against the Yimby fight for affordable housing."—Edward Glaeser, Wall Street Journal

“Holleran takes us behind the rhetoric of the YIMBY/NIMBY debate to reveal a generational rupture where young white professionals for whom ‘the rent is too damn high’ ally themselves with real estate developers to build taller and denser housing. Whether you see them as racial justice warriors or neoliberal sellouts, Holleran offers a valuable introduction to their growing influence in local progressive politics.”—Sharon Zukin, author of Naked City: The Death and Life of Authentic Urban Places

“Solving the housing crisis requires breaking from the political culture of exclusion and its sharpest expression: NIMBYism. In this dazzling, original sociological investigation, Holleran charts the rise of a movement that’s saying yes to the city and searching for new ways of living together before it’s too late.”—Eric Klinenberg, author of Palaces for the People

“A conceptually ambitious and empirically rich study of a new global urban phenomenon. Holleran reveals how this novel movement reflects as well as complicates the age-old struggle to wrest modern cities from the ownership and control of elites. Yes to the City is a major contribution to the understanding of contemporary cities.”—Brendan Gleeson, author of The Urban Condition