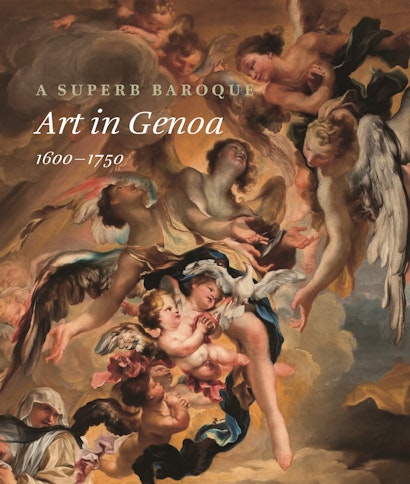 Genoa completed its transformation from a faded maritime power into a thriving banking center for Europe in the seventeenth century. The wealth accumulated by its leading families spurred investment in the visual arts on an enormous scale. This volume explores how artists both foreign and native created a singularly rich and extravagant expression of the baroque in works of extraordinary variety, sumptuousness, and exuberance. This art, however, has remained largely hidden behind the facades of the city’s palaces, with few works, apart from those by the school’s great expatriates, found beyond its borders. As a result, the Genoese baroque has been insufficiently considered or appreciated.

Lavishly illustrated, A Superb Baroque is comprehensive, encompassing all the major media and participants. Presented are some 140 select works by the celebrated foreigners drawn to the city and its flourishing environment—from Peter Paul Rubens, Anthony van Dyck, and Giulio Cesare Procaccini to Pierre Puget, Marcantonio Franceschini, and Francesco Solimena; by the major Genoese masters active for much of their careers in other settings—Bernardo Strozzi, Giovanni Benedetto Castiglione, Filippo Parodi, and Alessandro Magnasco; and above all by the brilliantly synthetic but unfamiliar masters who worked primarily in Genoa itself—Gioacchino Assereto, Valerio Castello, Domenico Piola, and Gregorio De Ferrari. Offering three levels of exploration—essays that frame and interpret, section introductions that characterize principal currents and stages, and texts that elucidate individual works—this volume is by far the most extensive study of the Genoese baroque in the English language.

Jonathan Bober is the Andrew W. Mellon Senior Curator of Prints and Drawings at the National Gallery of Art. Piero Boccardo is superintendent of collections for the City of Genoa. Franco Boggero is director of historic and artistic heritage at the Soprintendenza Archeologia, Belle Arti e Paesaggio, Genoa. Peter M. Lukehart is associate dean of the Center for Advanced Study in the Visual Arts at the National Gallery of Art. Andrea Zanini is associate professor of economic history at the University of Genoa.