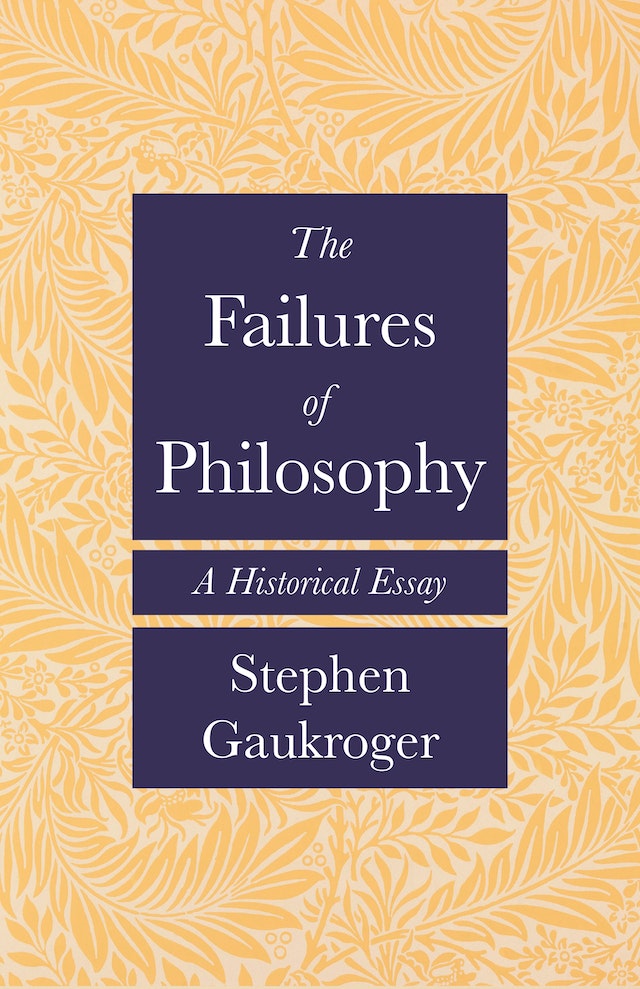 Philosophers are generally unaware of the failures of philosophy, recognizing only the failures of particular theories, which are then remedied with other theories. But, taking the long view, philosophy has actually collapsed several times, been abandoned, sometimes for centuries, and been replaced by something quite different. When it has been revived it has been with new aims that are often accompanied by implausible attempts to establish continuity with a perennial philosophical tradition. What do these failures tell us?

The Failures of Philosophy presents a historical investigation of philosophy in the West, from the perspective of its most significant failures: attempts to provide an account of the good life, to establish philosophy as a discipline that can stand in judgment over other forms of thought, to set up philosophy as a theory of everything, and to construe it as a discipline that rationalizes the empirical and mathematical sciences. Stephen Gaukroger argues that these failures reveal more about philosophical enquiry and its ultimate point than its successes ever could. These failures illustrate how and why philosophical inquiry has been conceived and reconceived, why philosophy has been thought to bring distinctive skills to certain questions, and much more.

An important and original account of philosophy’s serial breakdowns, The Failures of Philosophy ultimately shows how these shortcomings paradoxically reveal what matters most about the field.

Stephen Gaukroger is emeritus professor of history of philosophy and history of science at the University of Sydney. His many books include Objectivity, Civilization and the Culture of Science and Descartes: An Intellectual Biography.

"Philosophy in the present, Stephen Gaukroger shows, cannot be understood without history—not just its own history, but also that of other disciplines, which at various moments provided answers to questions that philosophy failed to resolve. This enormously important and illuminating book has significant implications for our understanding of intellectual change over time. The breadth and erudition of Gaukroger’s account, which begins in classical antiquity and ends in the late twentieth century, are simply extraordinary."—Thomas Ahnert, University of Edinburgh

"With great clarity and verve, Stephen Gaukroger presents not only a catalog of philosophy's ambitions and defeats, but also reveals how these vicissitudes came to pass. Successive and devastating failures have left us with a discipline that is now merely a metatheory of science and ‘a shadow of its former self.’ Gaukroger leaves us with the conviction that by recognizing these ultimately unhappy stories, we may be able to learn from them. Through its stunning sweep and erudition, this book is itself one source of hope in philosophy’s currently constricted times."—Michael Della Rocca, Yale University

"In this audacious and ambitious book, Stephen Gaukroger offers an overview of Western philosophy, from its very beginnings to its current state, emphasizing not its successes, but the failures that have led to its successive transformations. The Failures of Philosophy is a great deal more than a history of philosophy: it is an inquiry into what philosophy was, is, and could be, executed by a distinguished scholar who has spent his long career immersed in these questions."—Daniel Garber, Princeton University