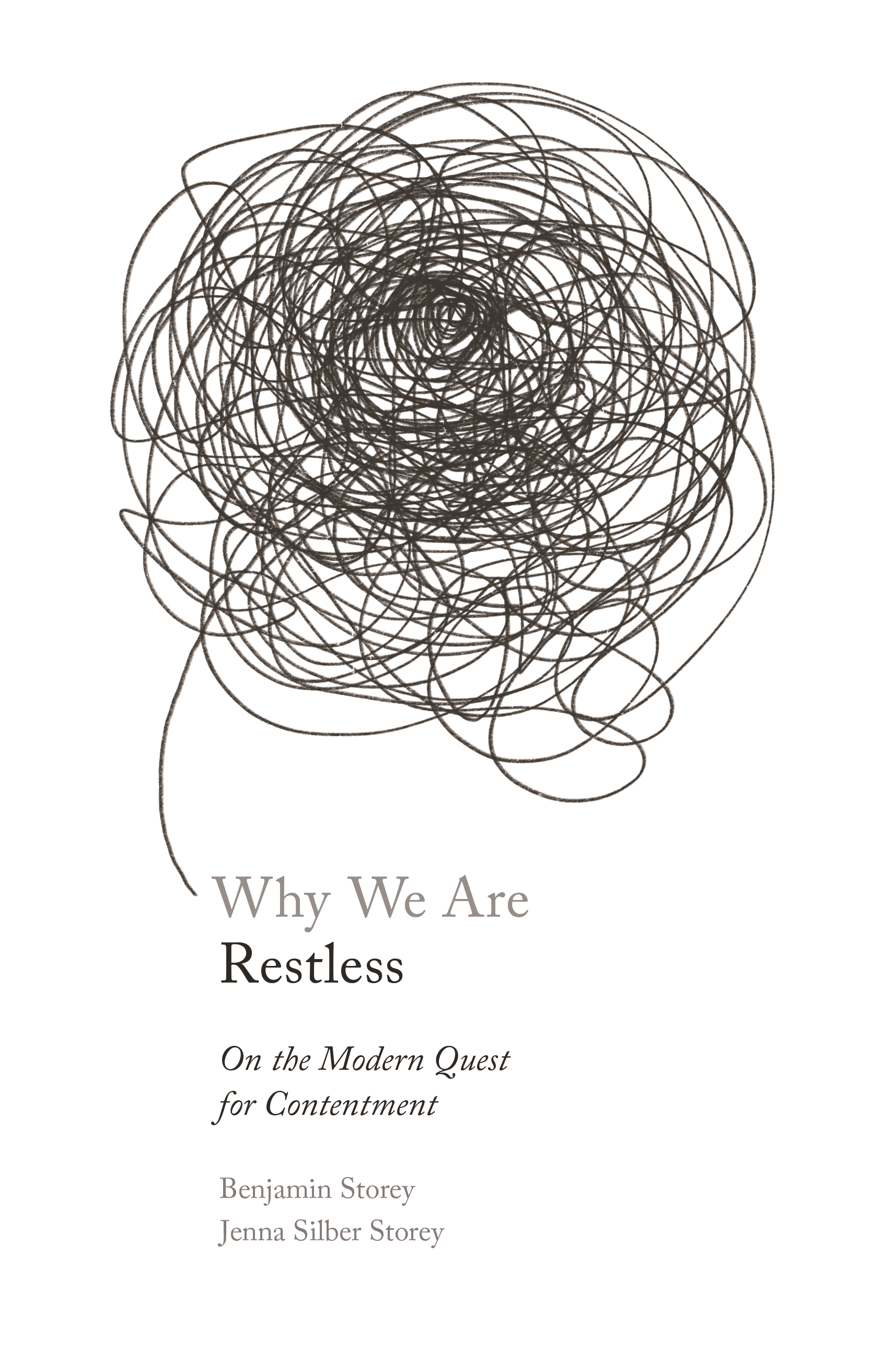 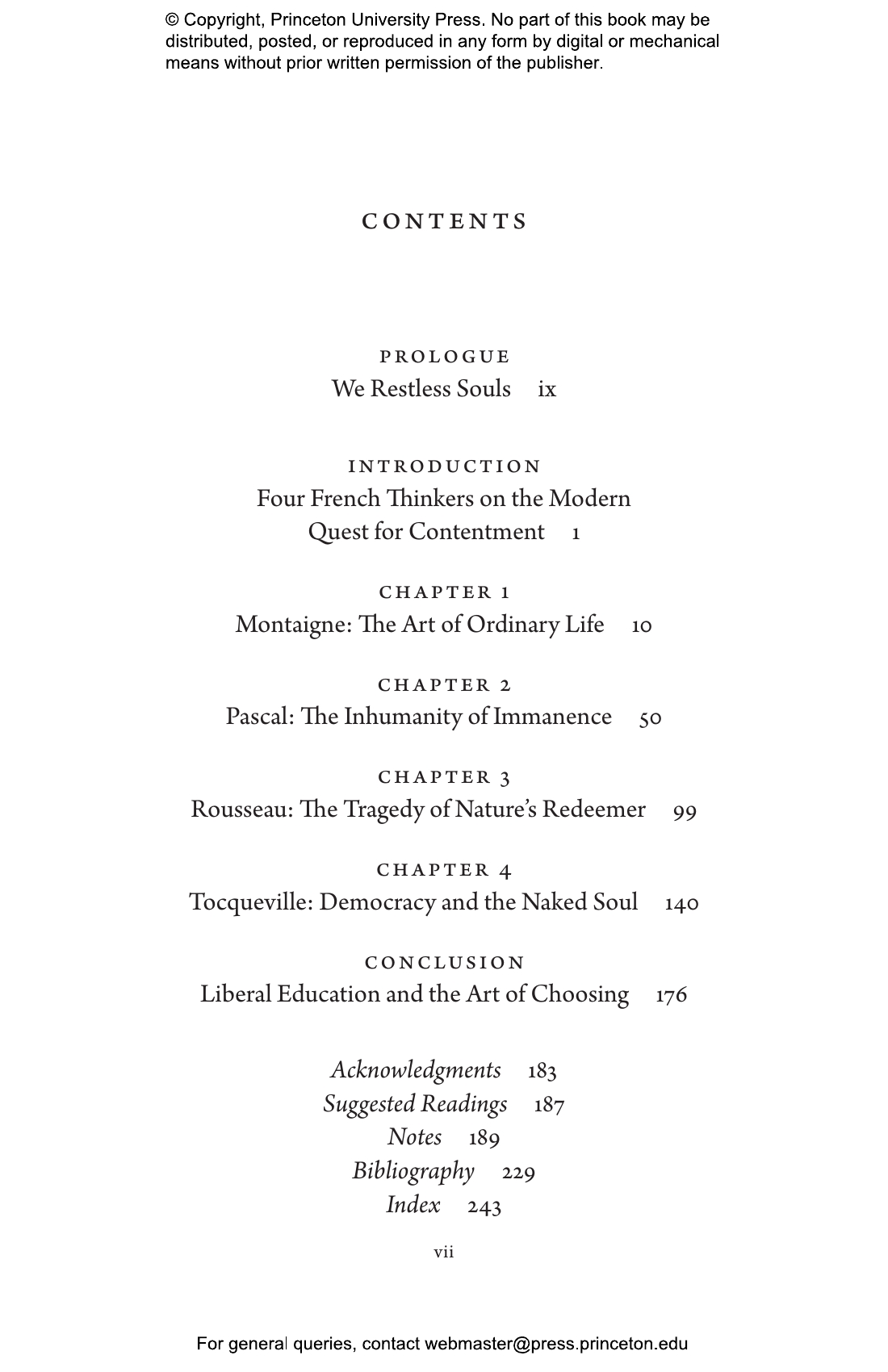 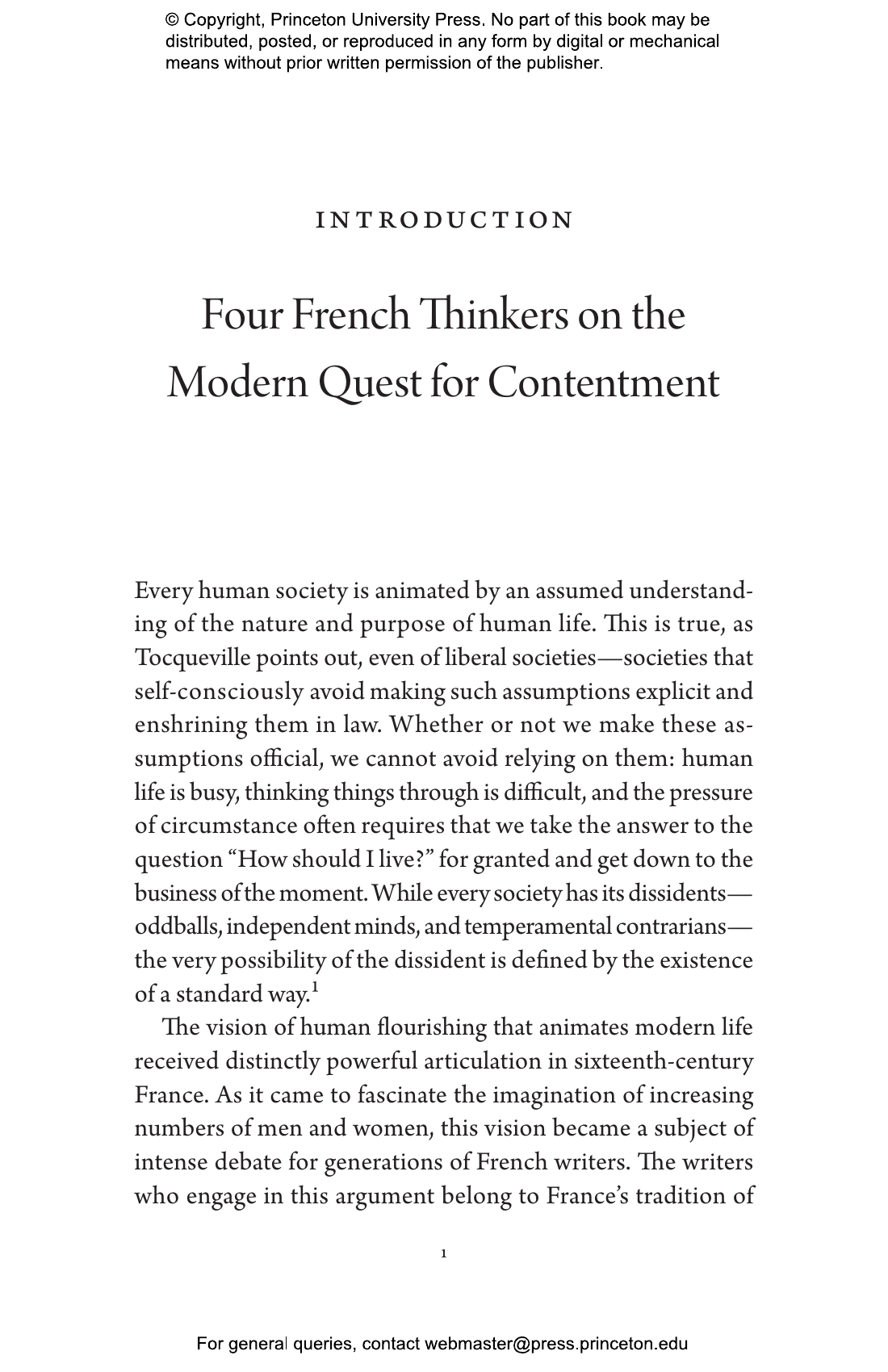 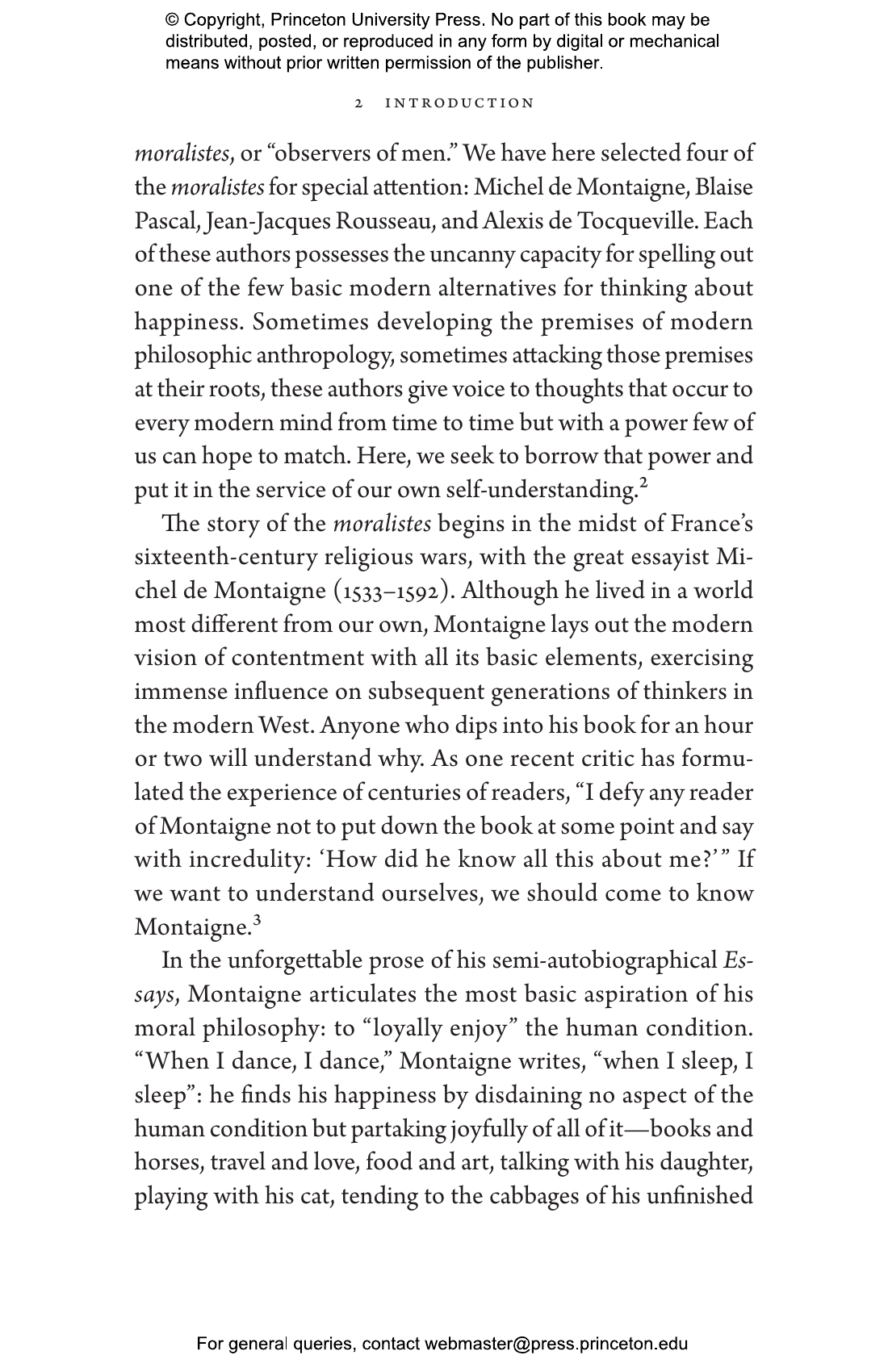 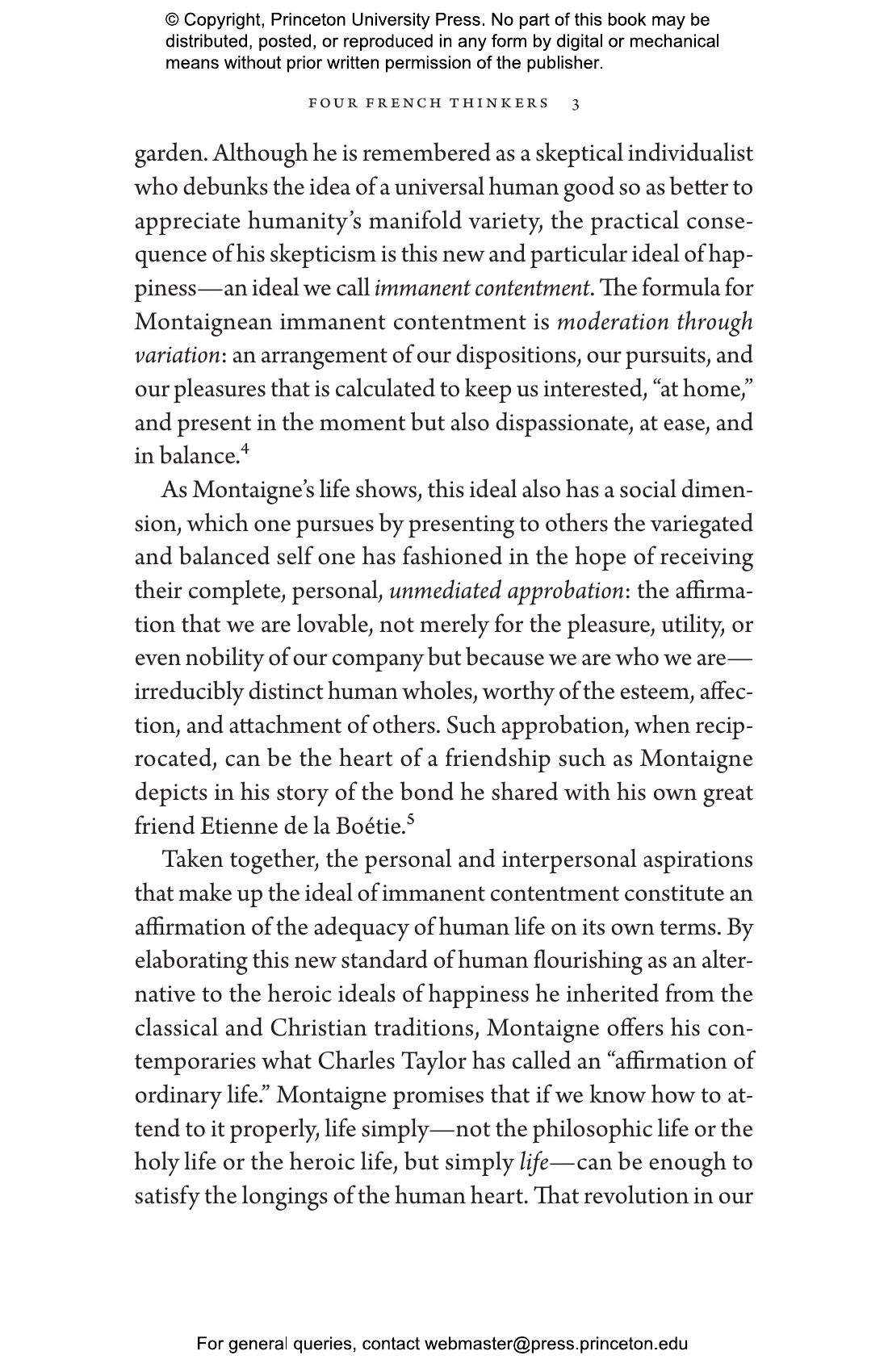 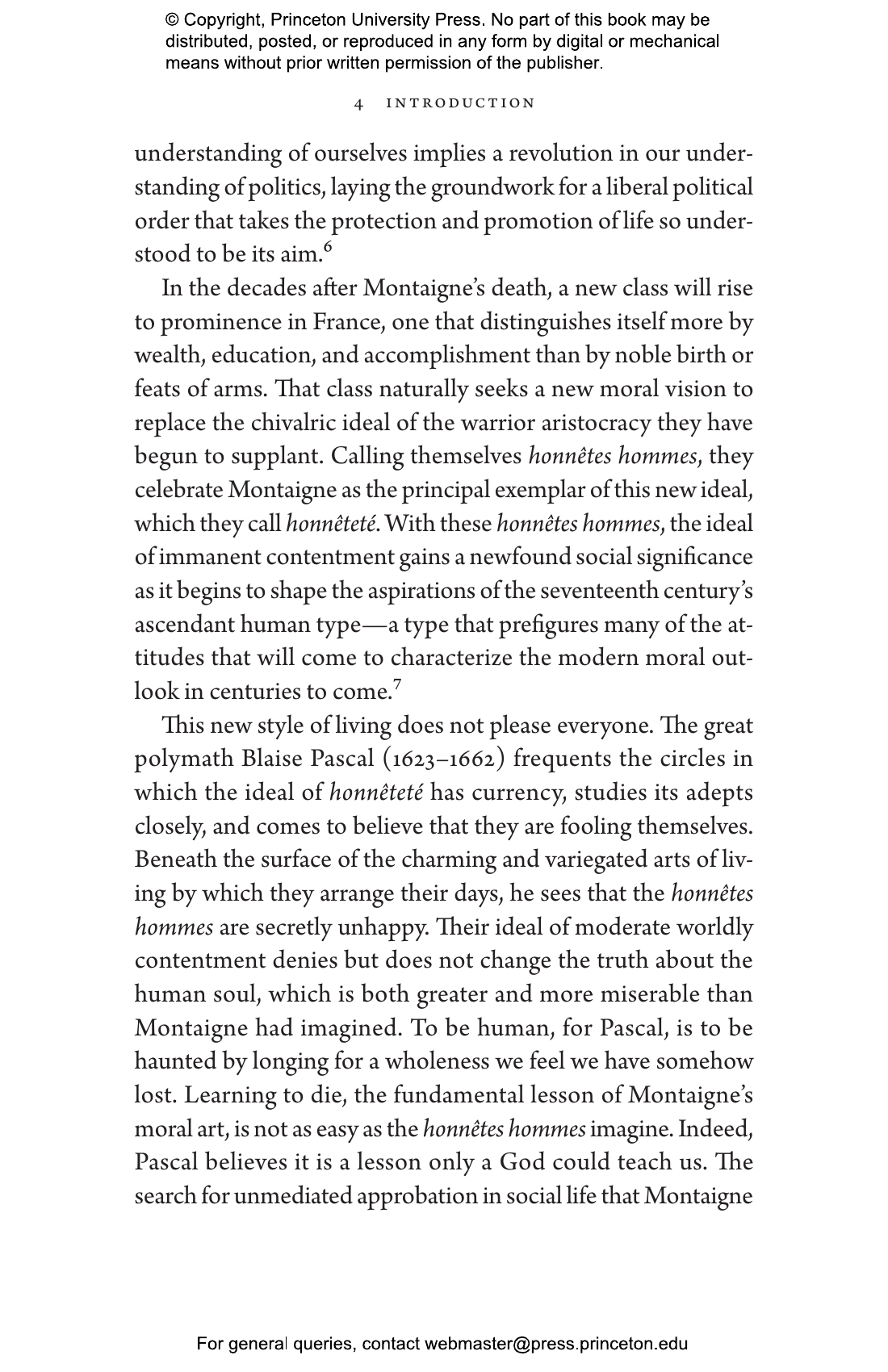 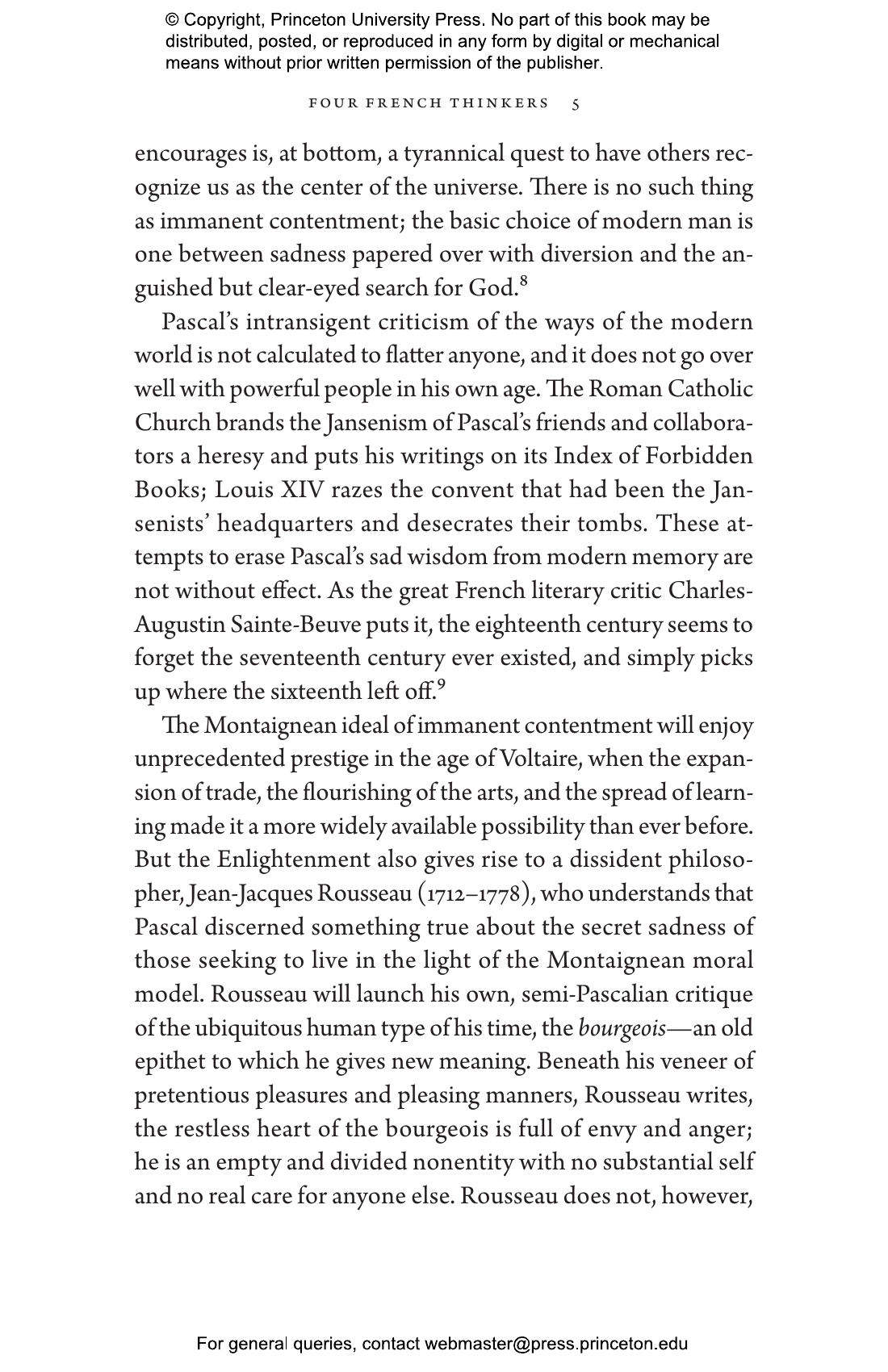 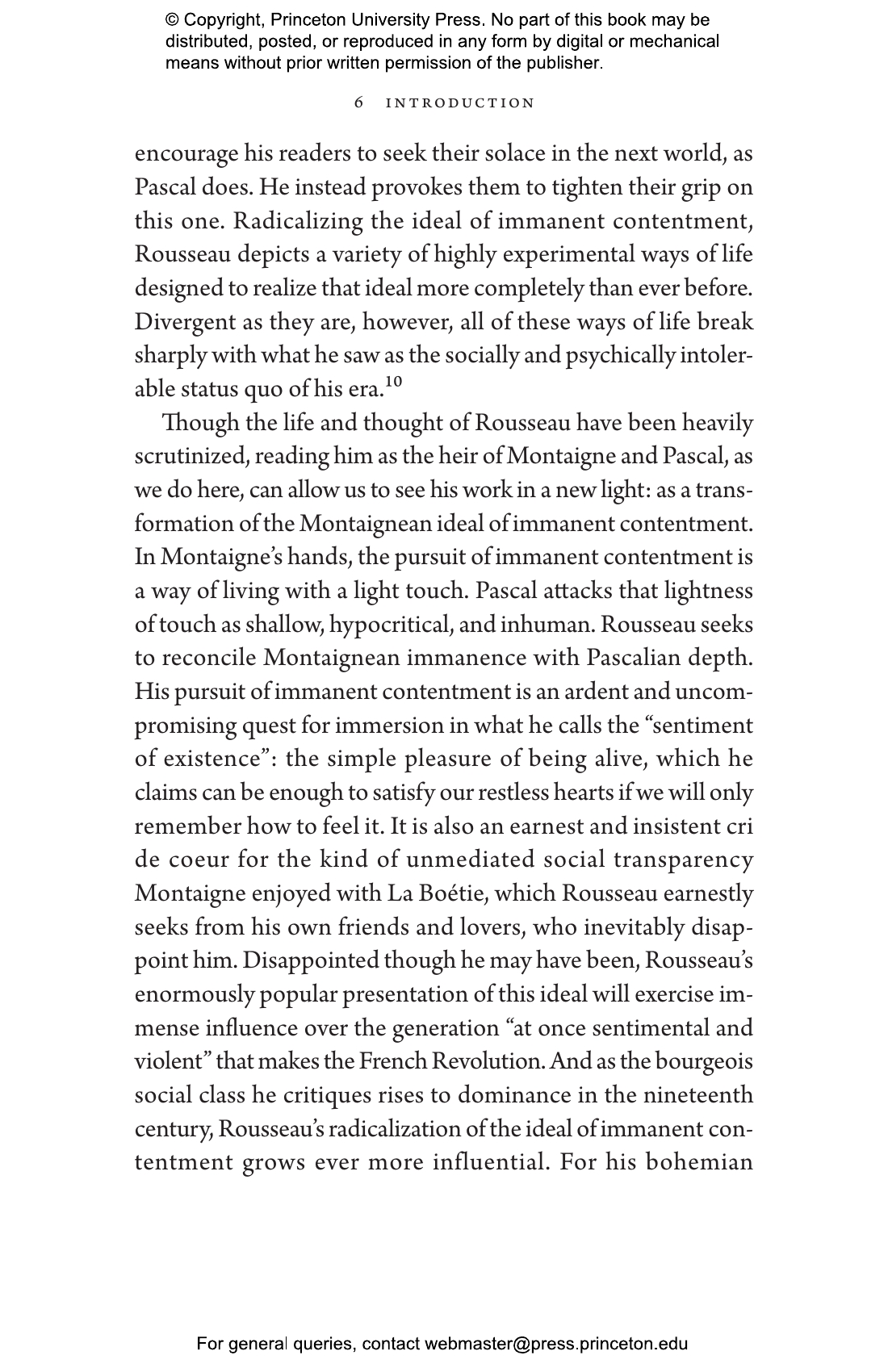 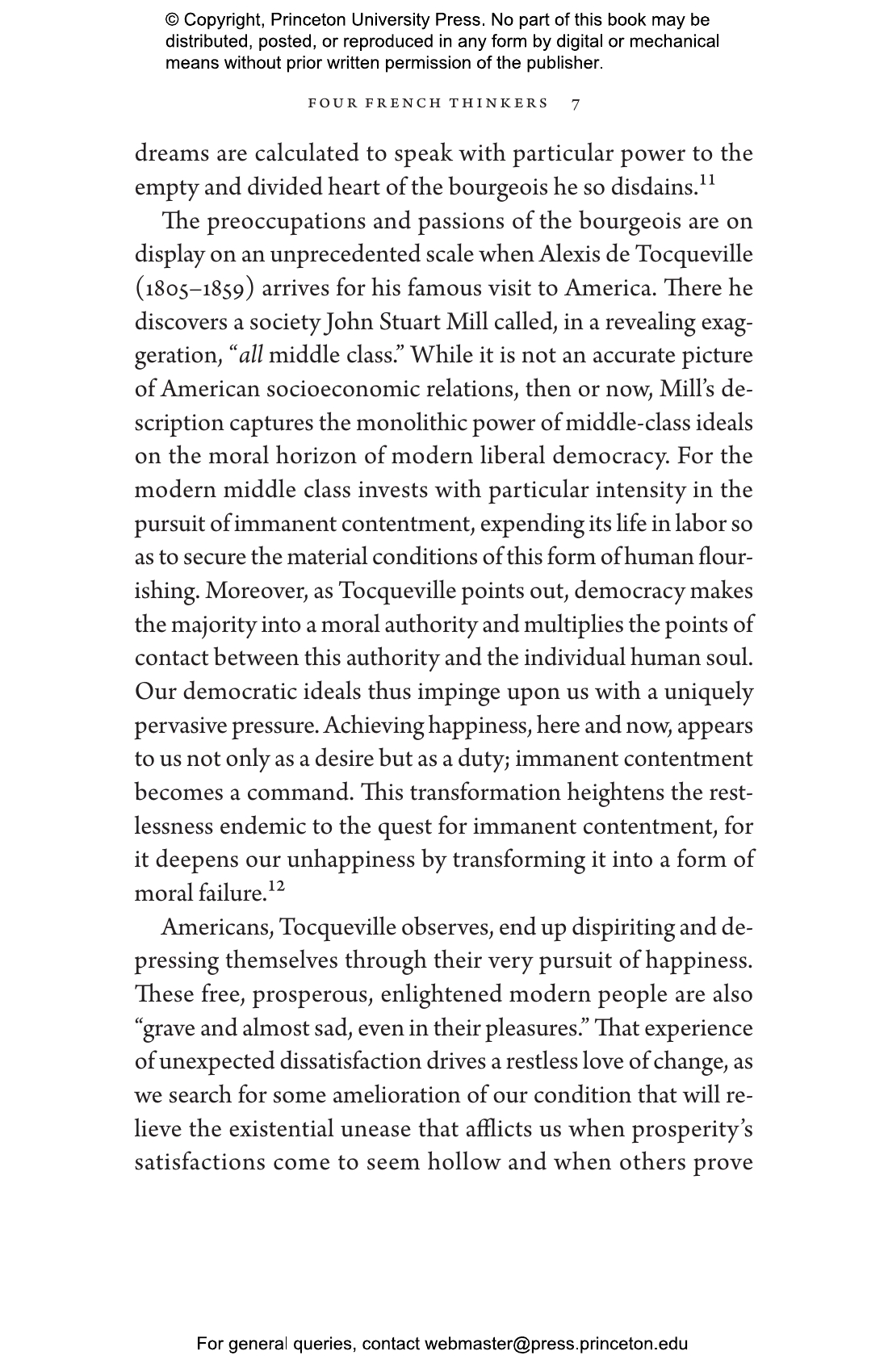 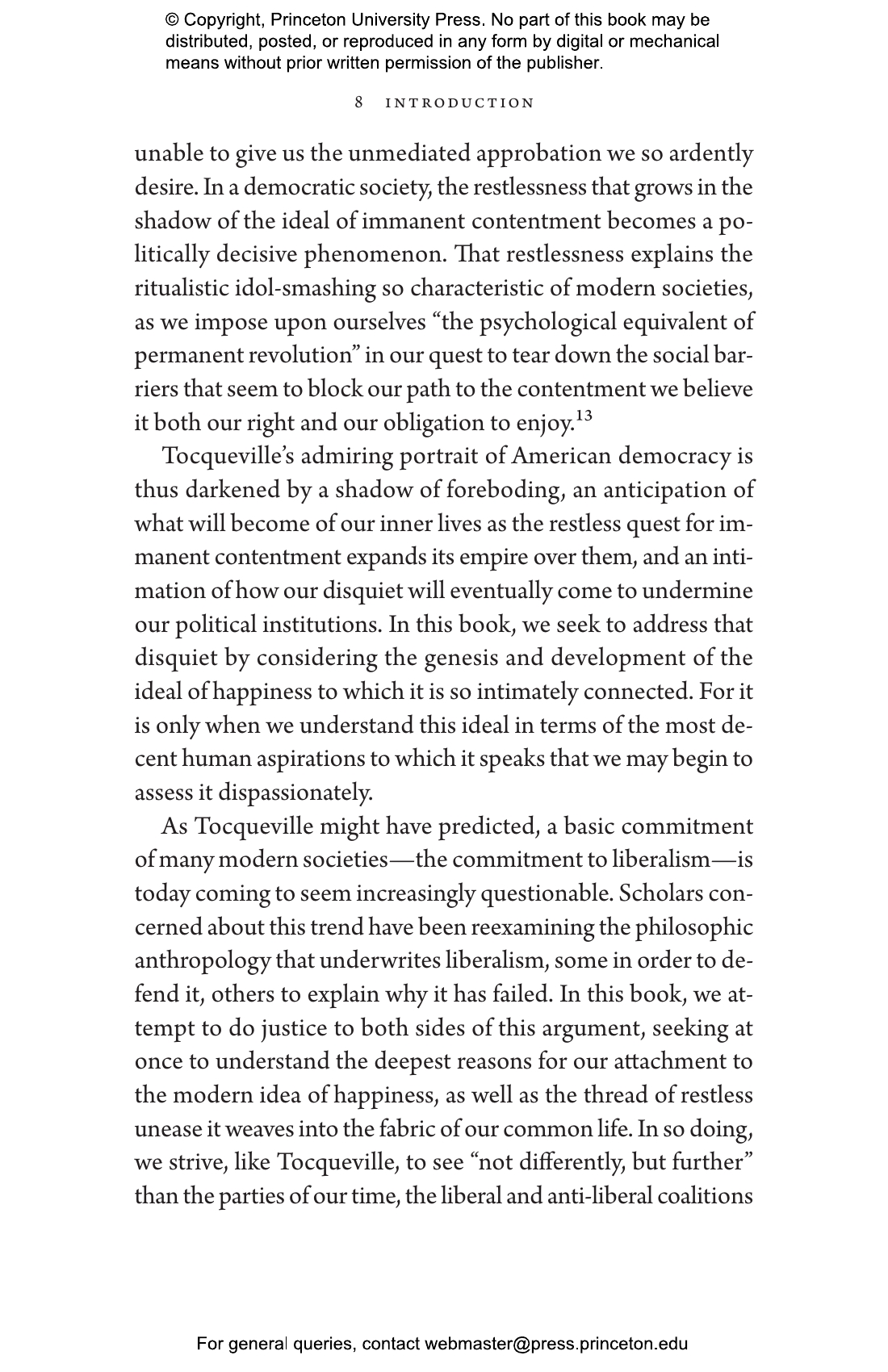 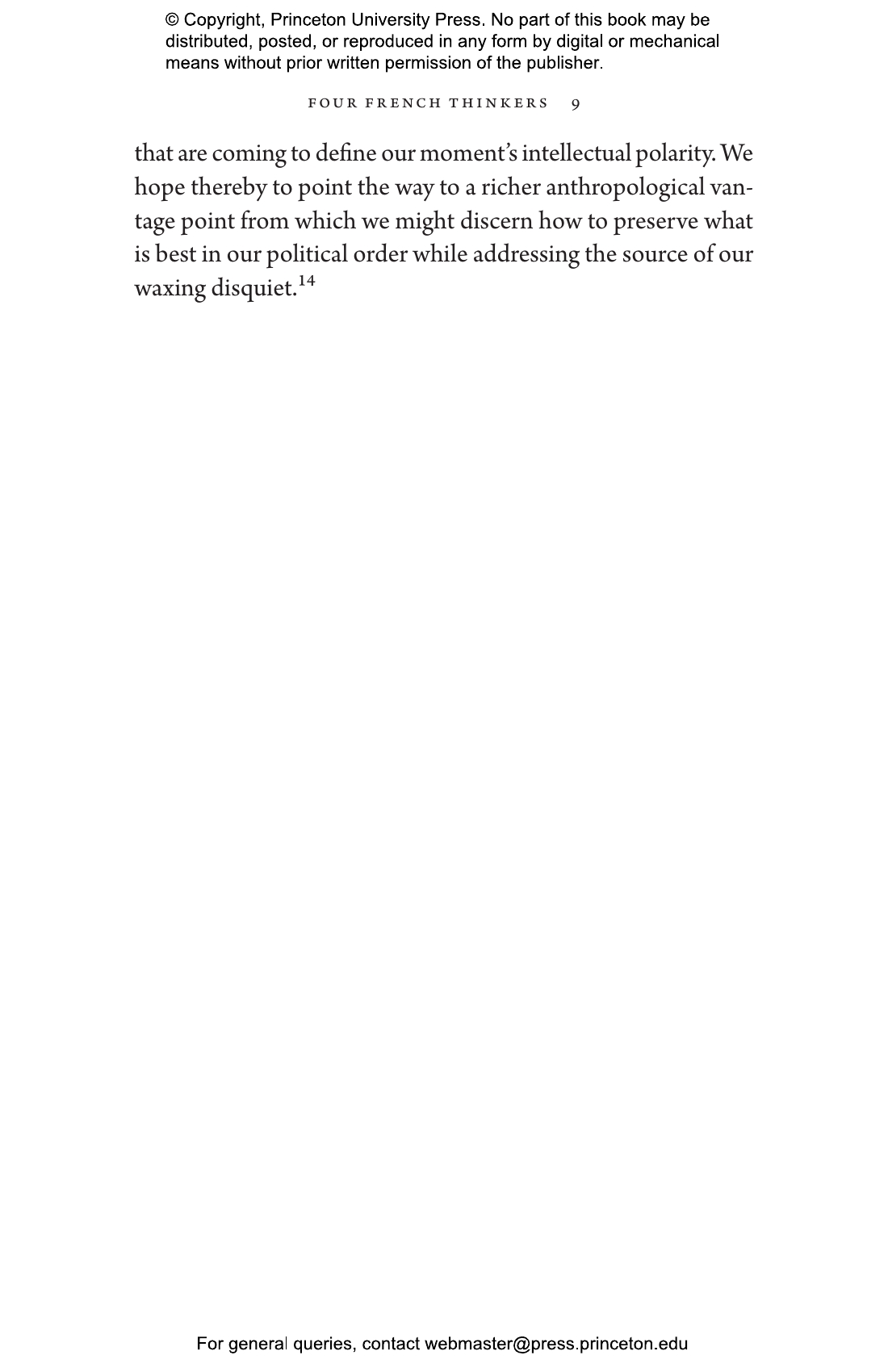 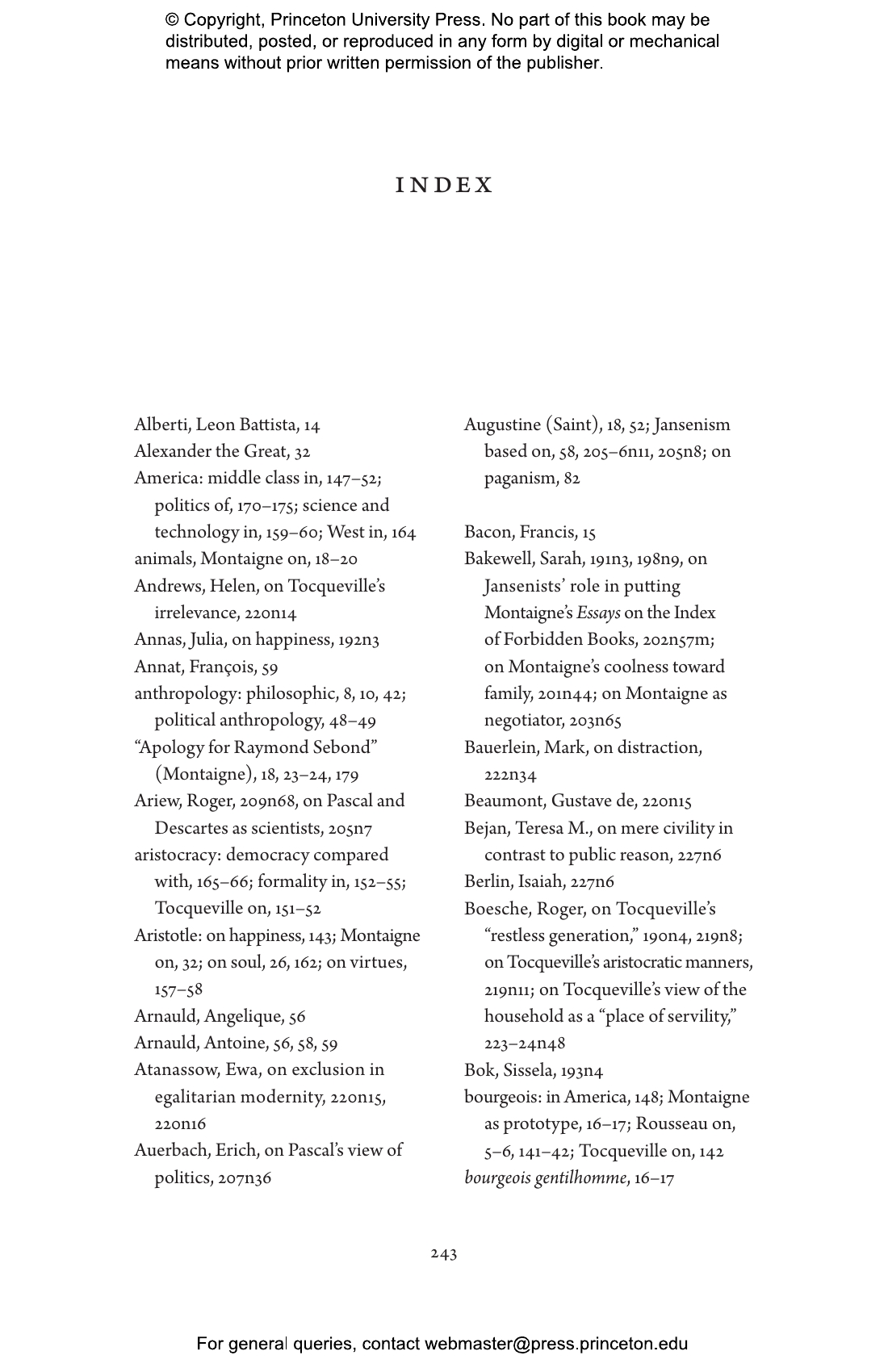 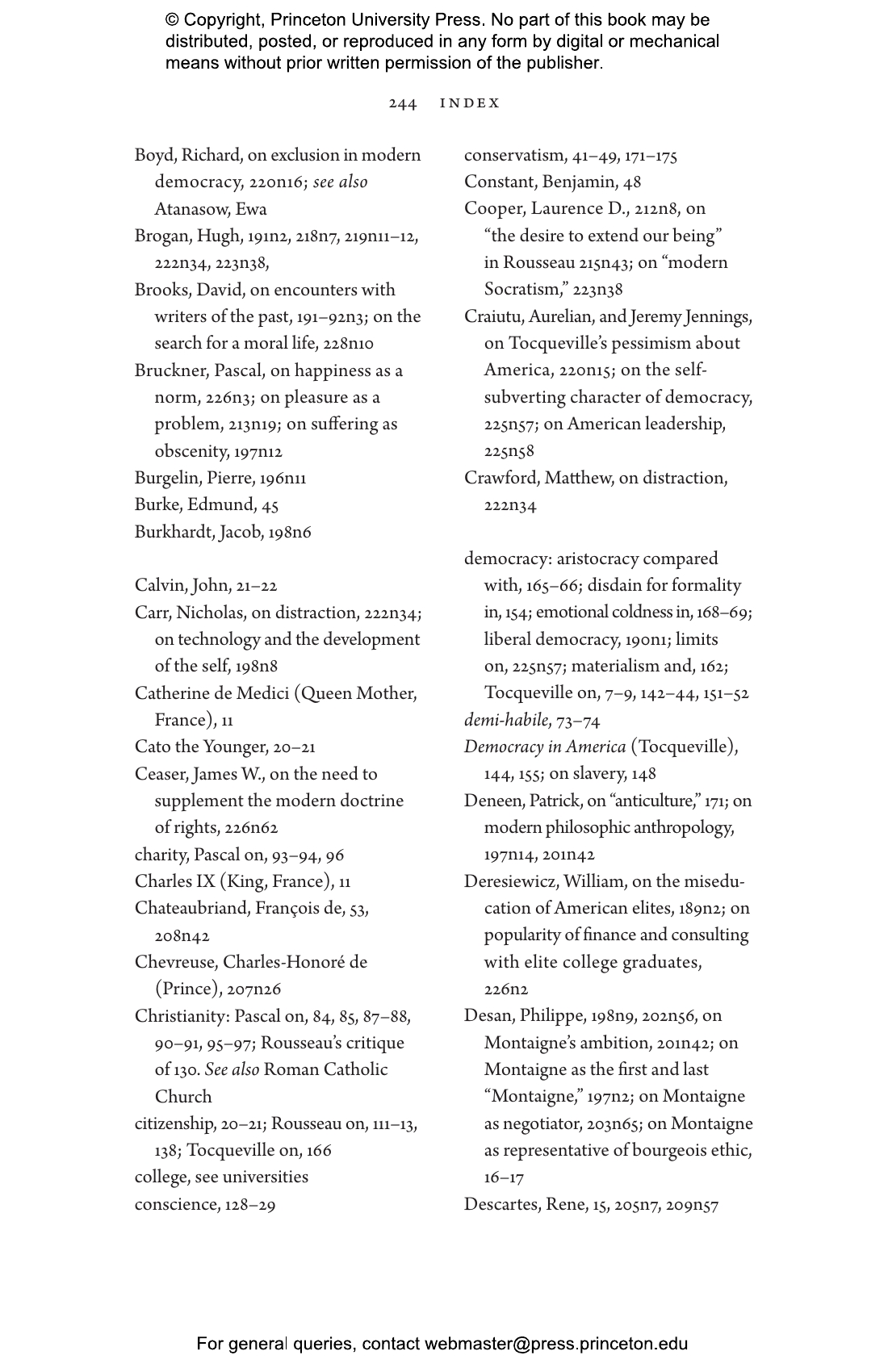 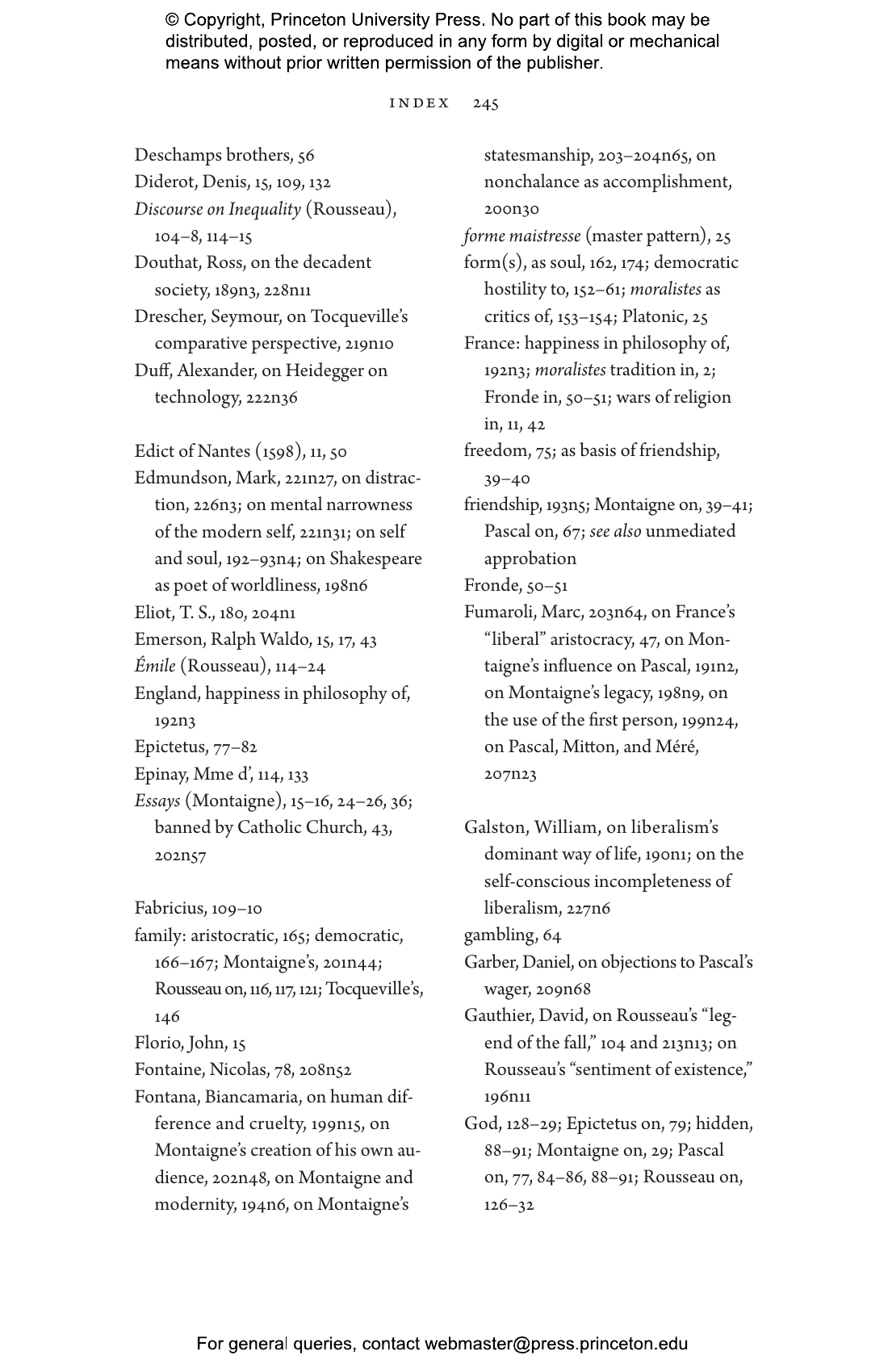 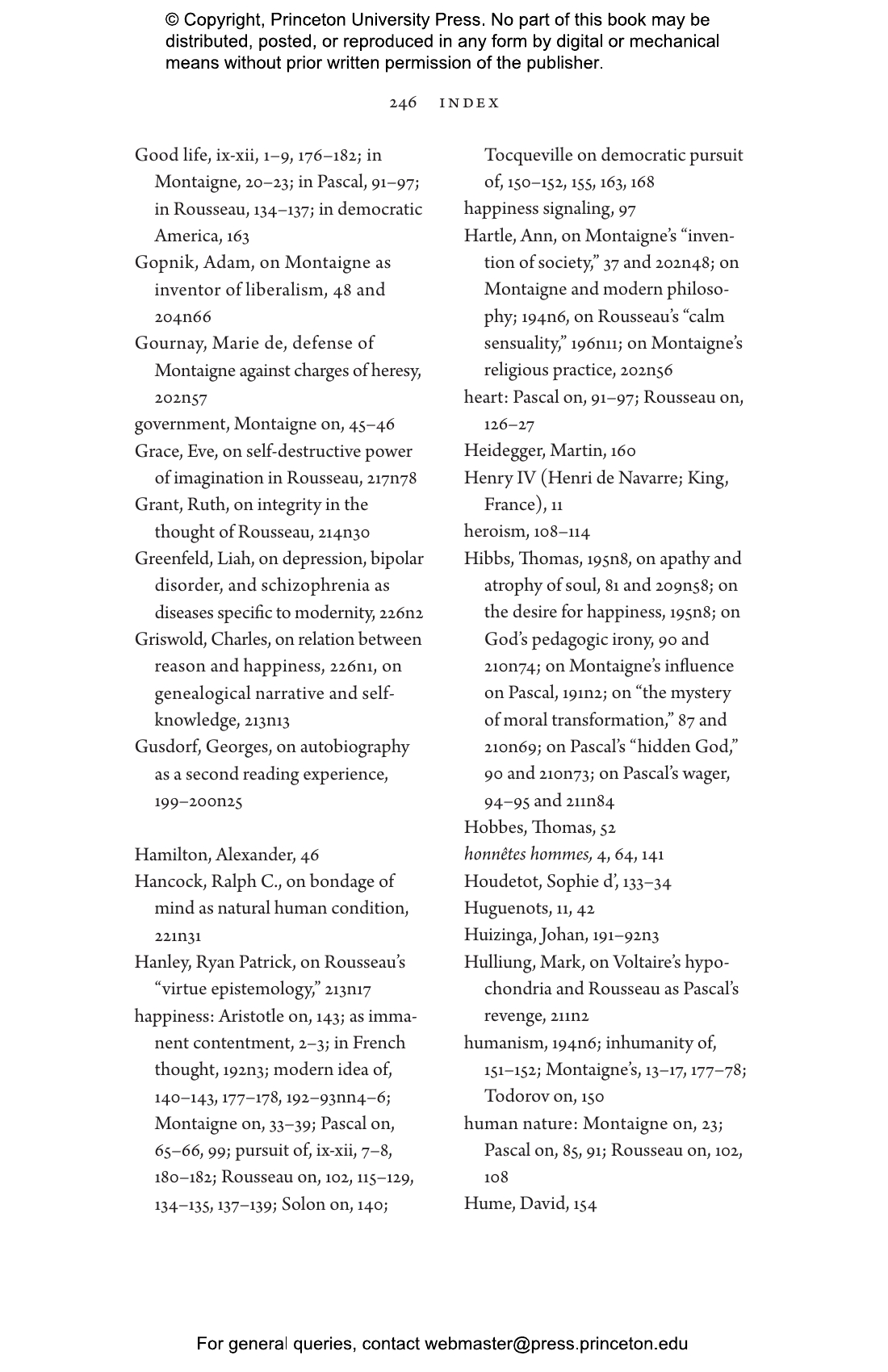 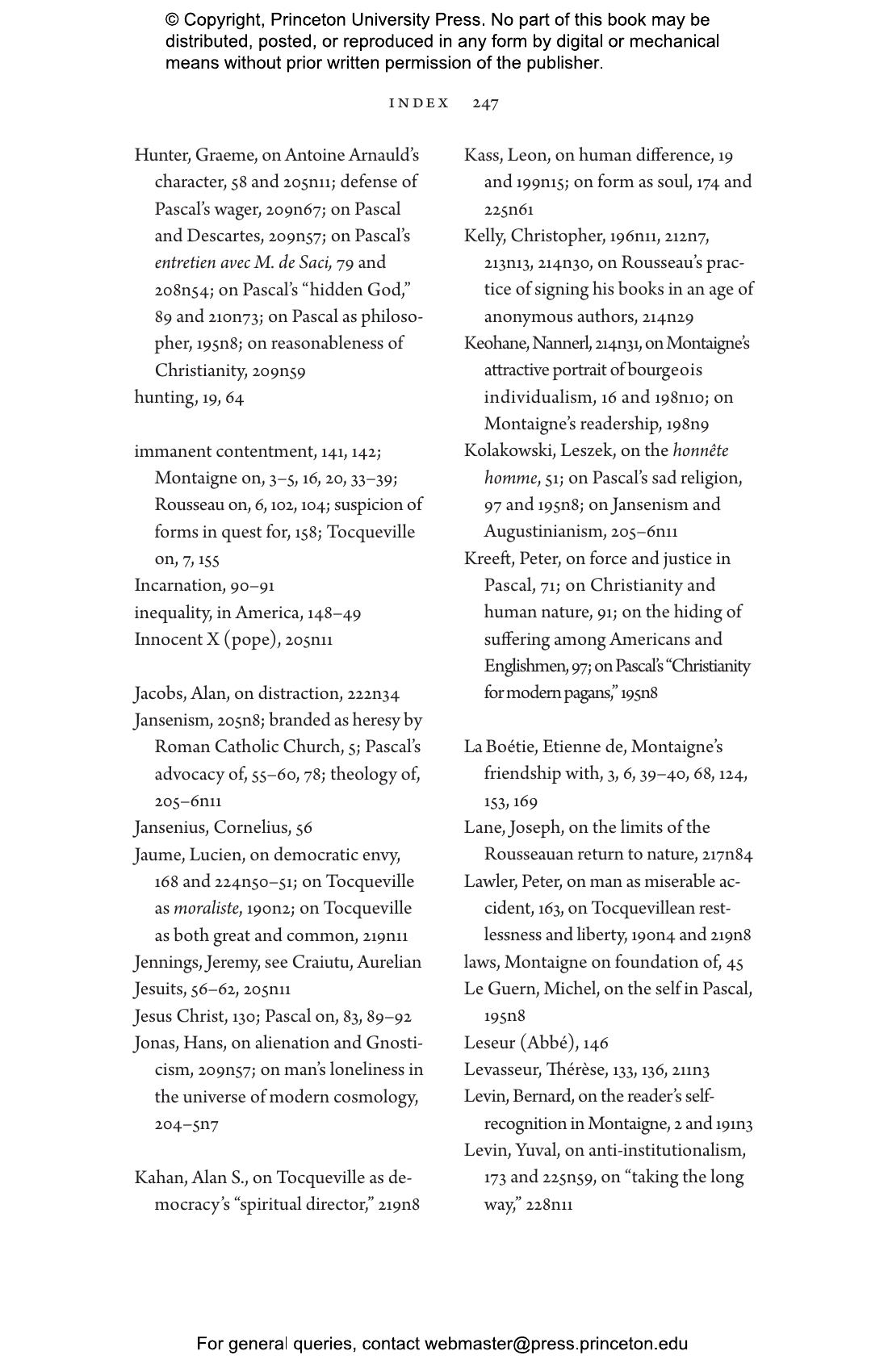 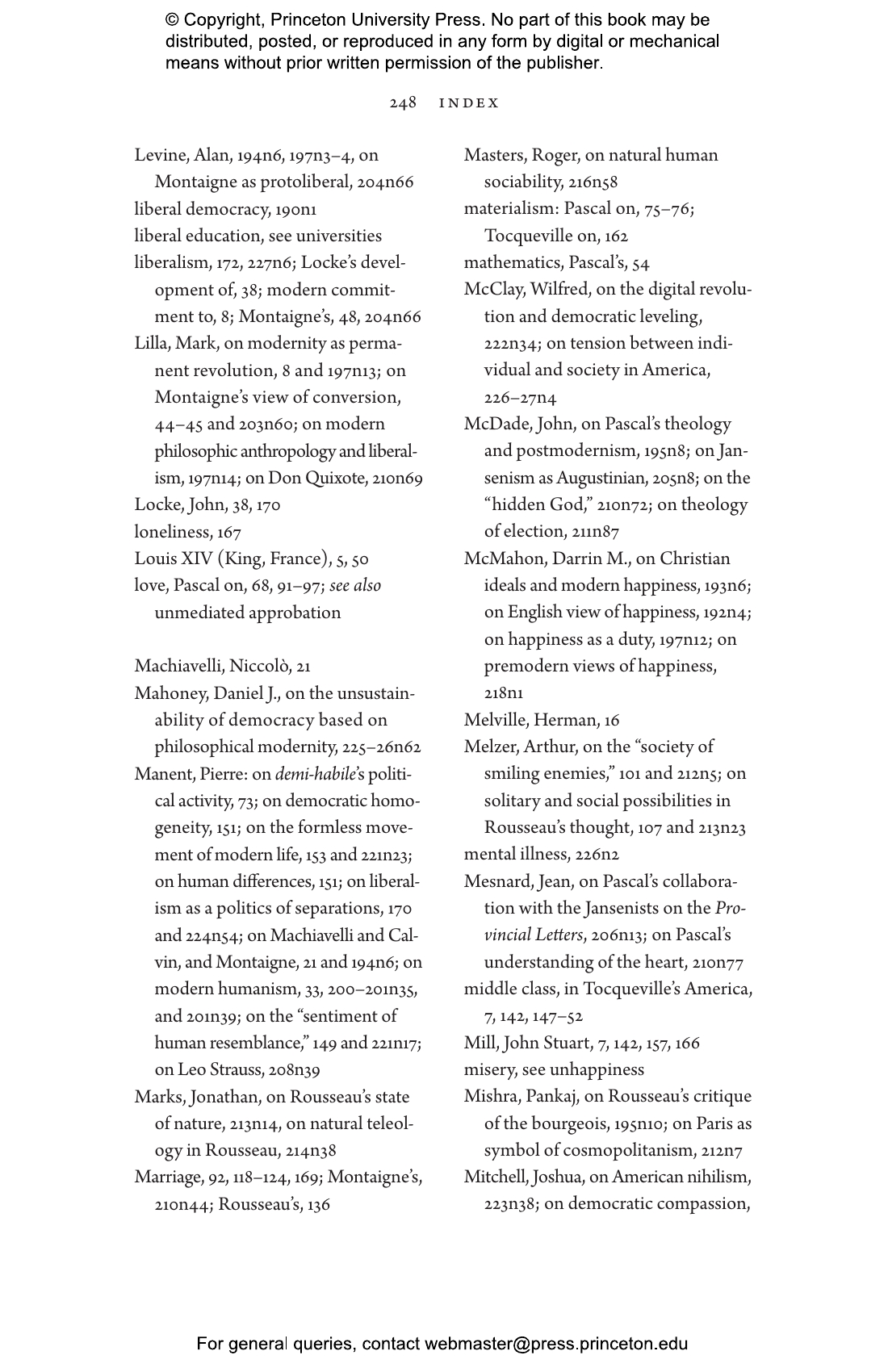 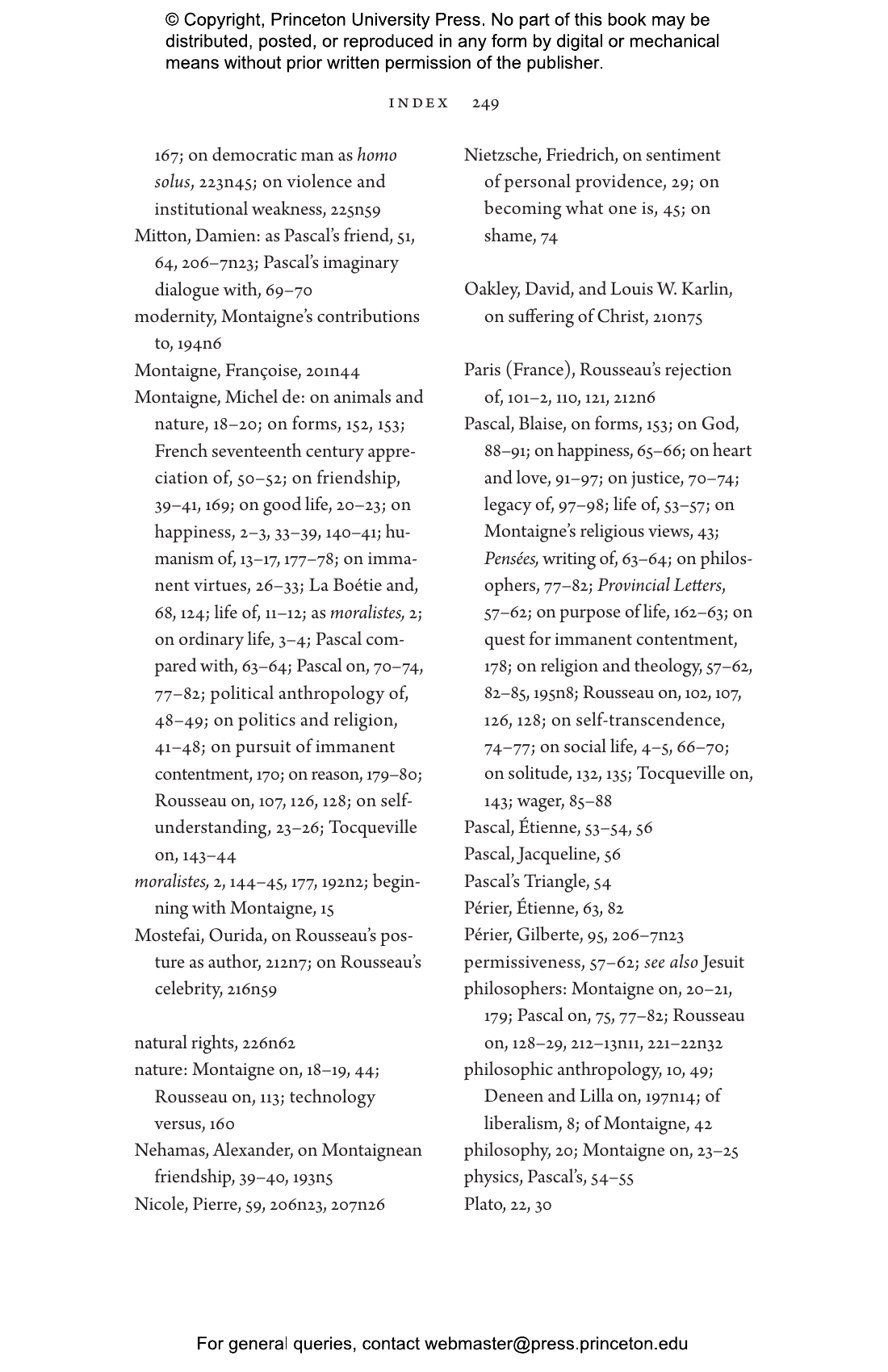 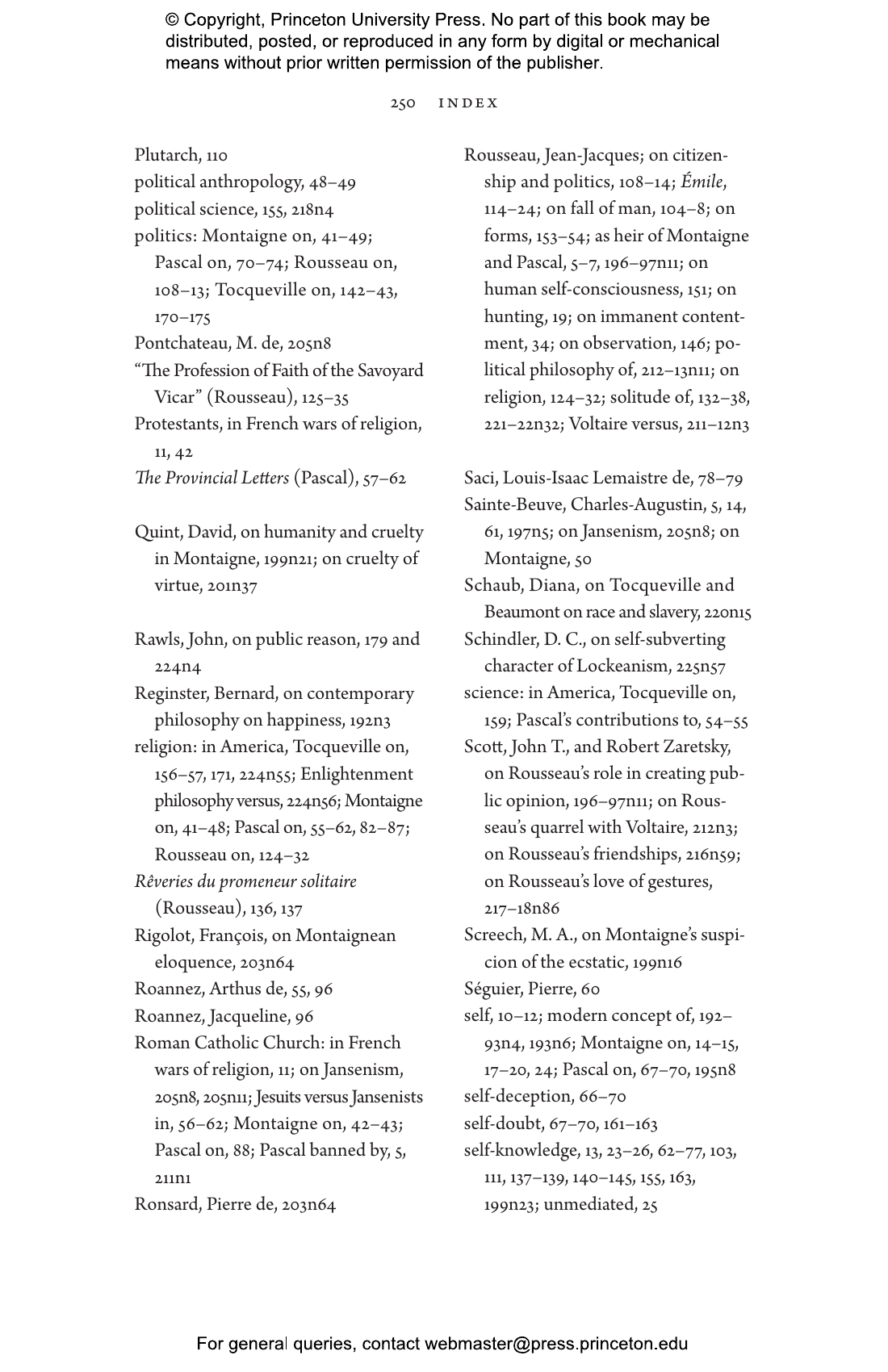 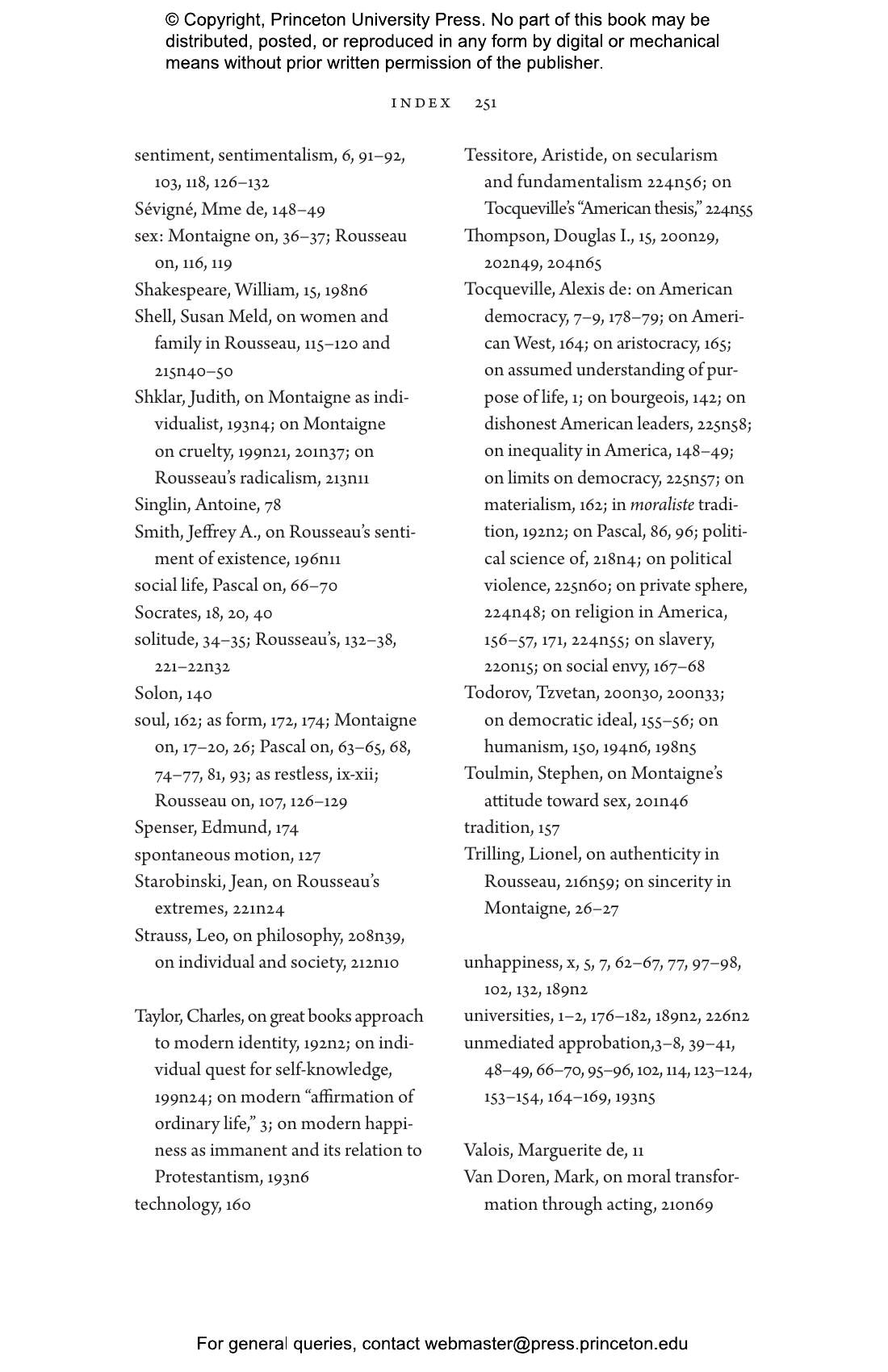 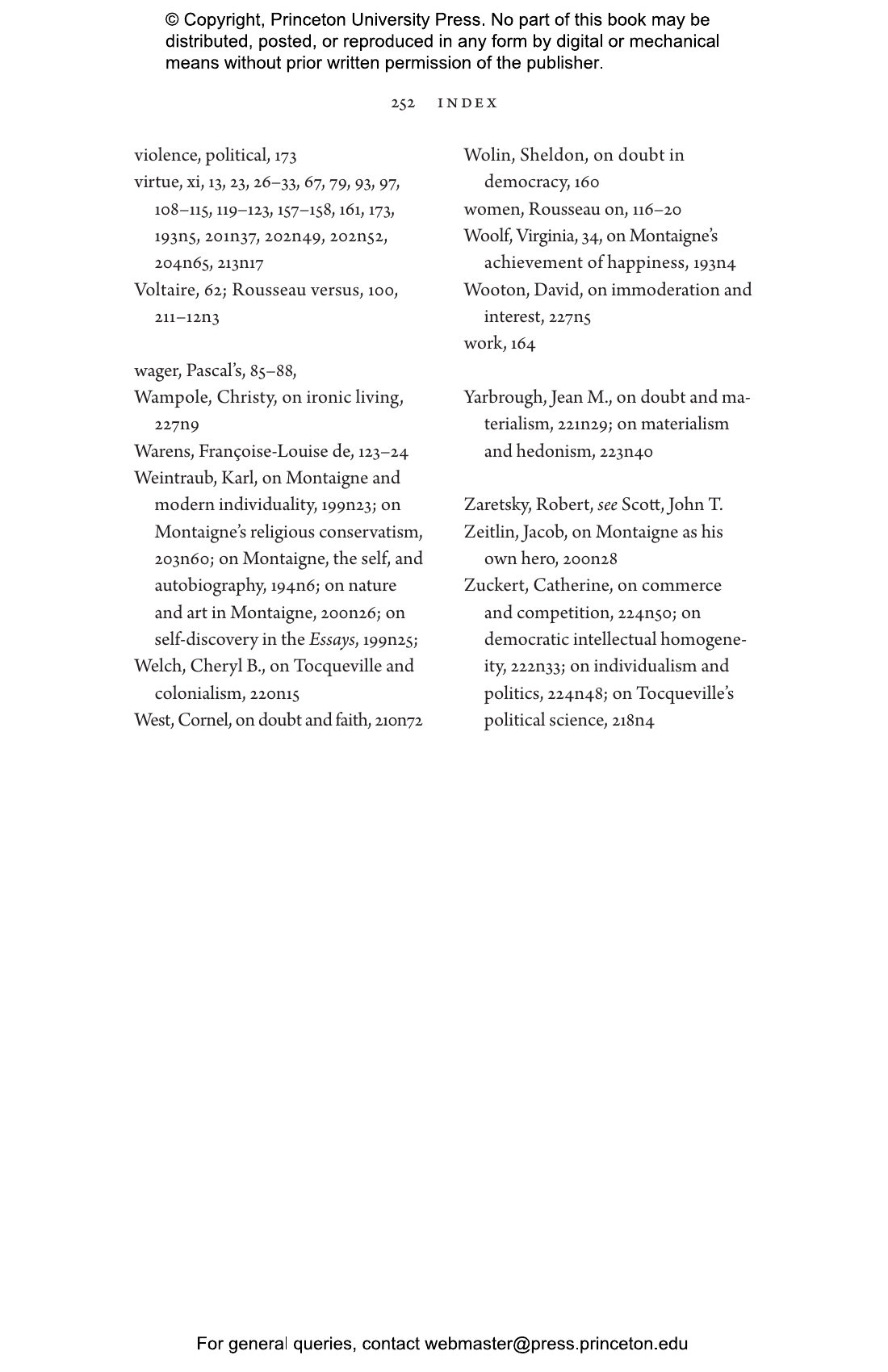 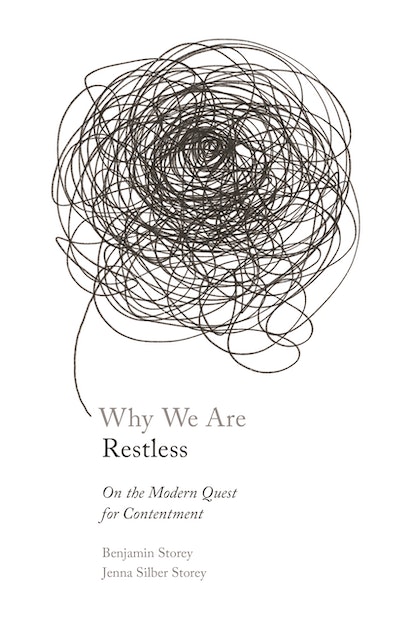 We live in an age of unprecedented prosperity, yet everywhere we see signs that our pursuit of happiness has proven fruitless. Dissatisfied, we seek change for the sake of change—even if it means undermining the foundations of our common life. In Why We Are Restless, Benjamin and Jenna Storey offer a profound and beautiful reflection on the roots of this malaise and examine how we might begin to cure ourselves.

Drawing on the insights of Montaigne, Pascal, Rousseau, and Tocqueville, Why We Are Restless explores the modern vision of happiness that leads us on, and the disquiet that follows it like a lengthening shadow. In the sixteenth century, Montaigne articulated an original vision of human life that inspired people to see themselves as individuals dedicated to seeking contentment in the here and now, but Pascal argued that we cannot find happiness through pleasant self-seeking, only anguished God-seeking. Rousseau later tried and failed to rescue Montaigne’s worldliness from Pascal’s attack. Steeped in these debates, Tocqueville visited the United States in 1831 and, observing a people “restless in the midst of their well-being,” discovered what happens when an entire nation seeks worldly contentment—and finds mostly discontent.

Arguing that the philosophy we have inherited, despite pretending to let us live as we please, produces remarkably homogenous and unhappy lives, Why We Are Restless makes the case that finding true contentment requires rethinking our most basic assumptions about happiness.

Listen in: Why We Are Restless | Chapter 1 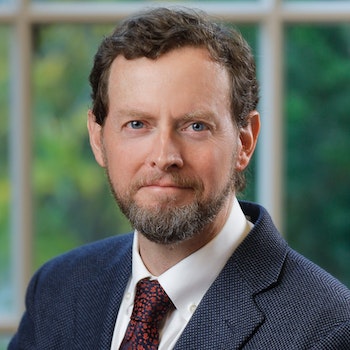 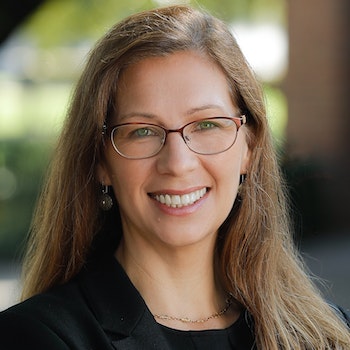 "I have read many critiques of liberalism, but none so original as Why We Are Restless."—Barton Swaim, Wall Street Journal

"[Benjamin and Jenna Storey’s] book is an education in the irony and complexity of the modern quest for contentment, and in the pre-modern sources required for any understanding of how to actually achieve meaningful contentment. . . . I can’t recommend it enough."—Yuval Levin, National Review

"Written in an engaging and compact style, [Why We Are Restless] is essential reading for all observers of the persistent, often hidden, but increasingly visible unhappiness of contemporary life. Benjamin and Jenna Storey have done us the service of restoring some of the deepest arguments about human happiness that lie at the roots of modern politics."—Adam Thomas, Public Discourse

"A powerful case that the invention of ‘immanent contentment’ in early modern France has everything to do with the infinite restlessness of the postmodern United States."—Delaney Thull, Fare Forward

"A great read for pastors, theologians, and Christians who want to think deeply and critically about the culture."—Stephen Roberts, Modern Reformation

"Culturally significant. . . . this study is a rich resource for reflection."—Paradigm Explorer

“Benjamin and Jenna Storey’s delightful Why We Are Restless belongs on the shelf of thoughtful, accessible books on human happiness like Matthew Crawford’s Shop Class as Soulcraft and Sarah Bakewell’s How to Live. Through the lens of four French thinkers, the Storeys explore perennial questions about contentment and examine some of the most compelling responses put forward over the centuries. They are teachers in the best sense, inviting us to understand ourselves better than we do.”—Mark Lilla, author of The Once and Future Liberal

“Today, so many of us are unable to sit still; obsessed with achievement, we are unable to think clearly about the purpose of our lives. The Storeys diagnose our ills as built into our implicit conception of happiness—we have sold ourselves short by aspiring to comfort and prosperity rather than to heroism or transcendent sources of wisdom or salvation. This challenging and provocative book provides us with substantial resources to look more closely at ourselves—all the while offering clarity, healing, and hope, wherever our reflections lead.”—Zena Hitz, author of Lost in Thought: The Hidden Pleasures of an Intellectual Life

“Why We Are Restless is a tour de force of philosophical genealogy. The sour disquiet of our lives, the foreboding of our political moment, the pervasive sense that we have come up against some real existential stuff—it all comes into focus here as the denouement of a conversation that began over four hundred years ago. In retracing turns taken in the history of the West, the Storeys indicate intriguing paths out of the intellectual cul-de-sac we have wandered into.”—Matthew B. Crawford, author of Shop Class as Soulcraft

“We moderns face a paradox. The freedom and abundance our societies have brought us only serve to make us discontented. In Why We Are Restless, Benjamin and Jenna Storey unearth the philosophical roots of this predicament. Their discussions of Montaigne, Pascal, Rousseau, and Tocqueville are unfailingly lucid, humane, accessible, and engaging. This is popularization in the best sense. It is relevant, eloquent, and never talks down to the reader.”—William Deresiewicz, author of Excellent Sheep

“In this elegantly argued and beautifully written book, Benjamin and Jenna Storey lay bare the intellectual root of our psychic distress: a shrunken view of our humanity, ignorant of the soul’s true longings. In tracing the history of the modern ‘self,’ the Storeys show the causes of our impoverished self-understanding and liberate us to choose a richer alternative. A most important book.”—Leon R. Kass, professor emeritus, Committee on Social Thought and the College, University of Chicago

“Why We Are Restless refuses to settle for easy and superficial solutions. Storey and Storey set out the deep tensions within each philosopher’s thought, and why they cannot be brushed aside.”—Ann Hartle, Emory University

“Absorbing, elegant, and stimulating, Why We Are Restless possesses an easy fluency and understated wit that are as rare as they are delightful.”—Wilfred McClay, author of The Masterless