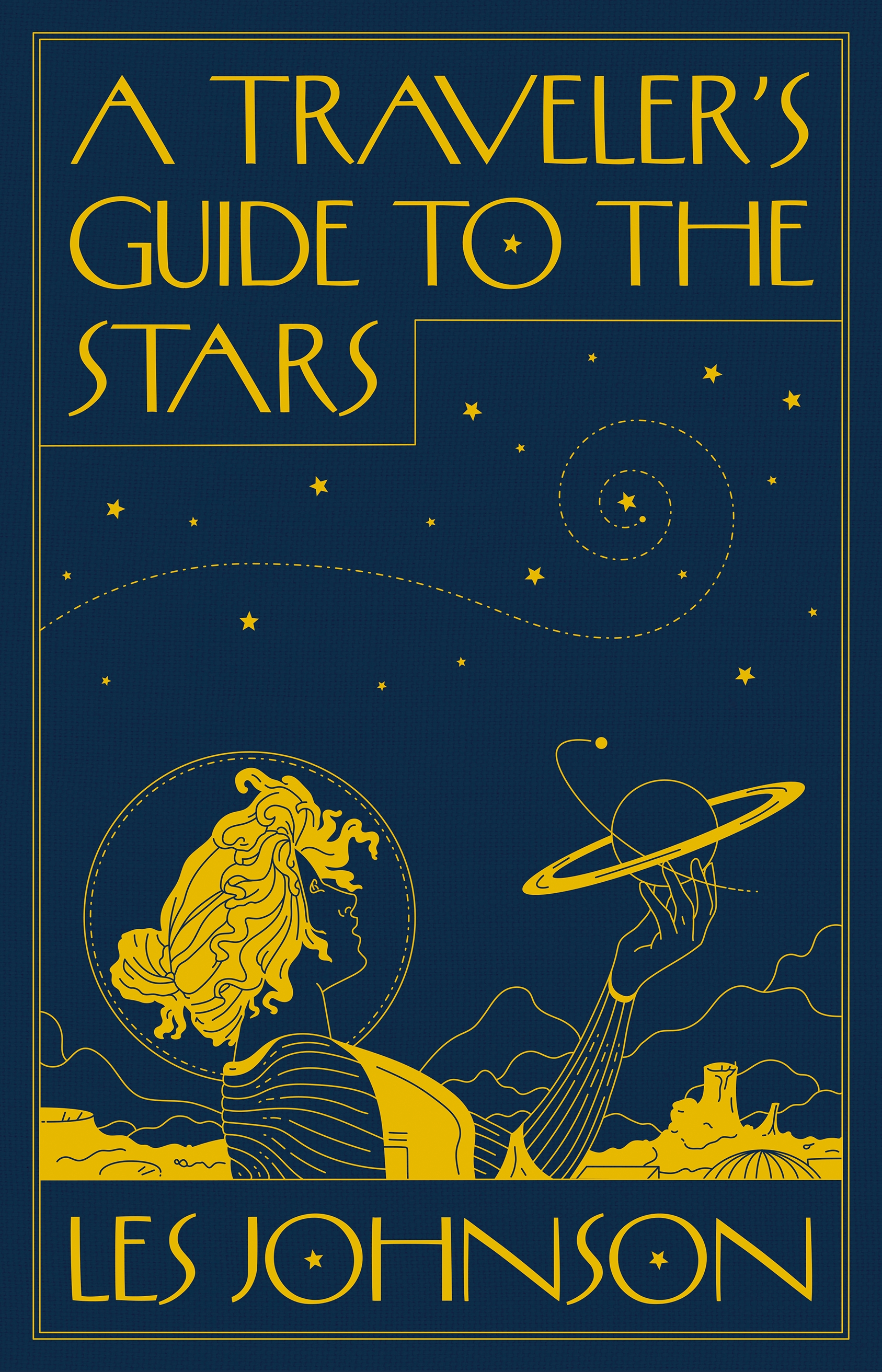 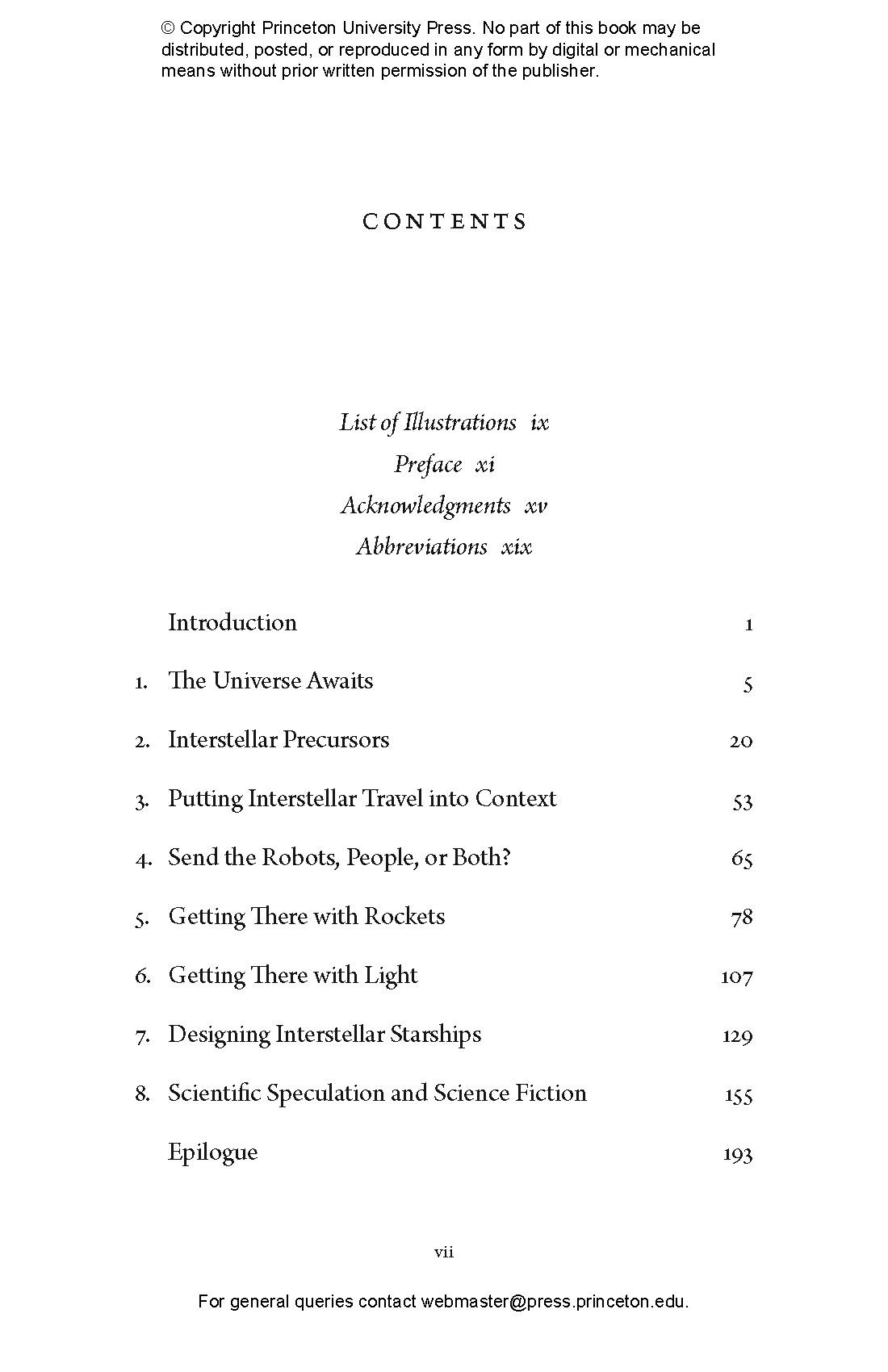 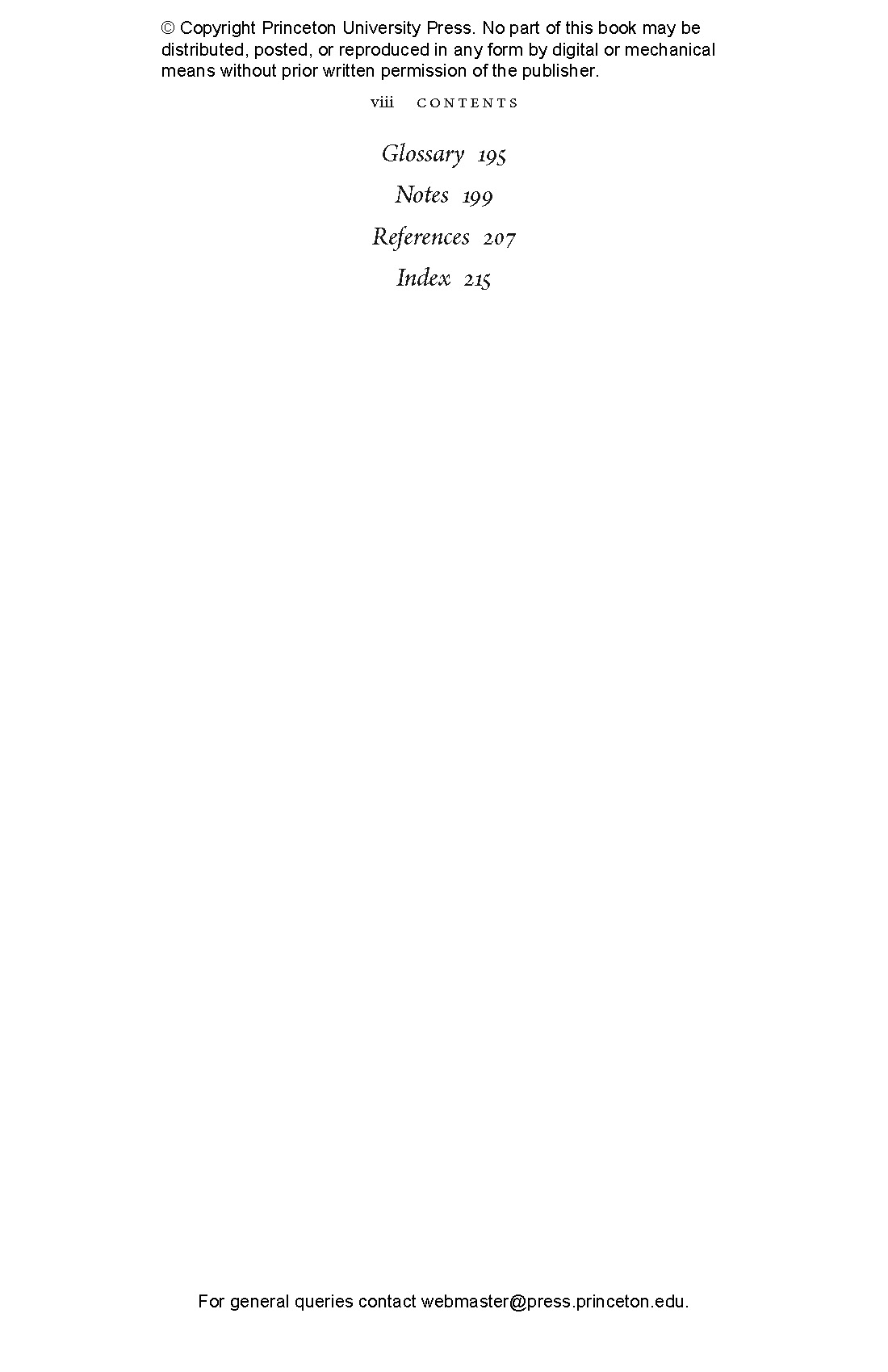 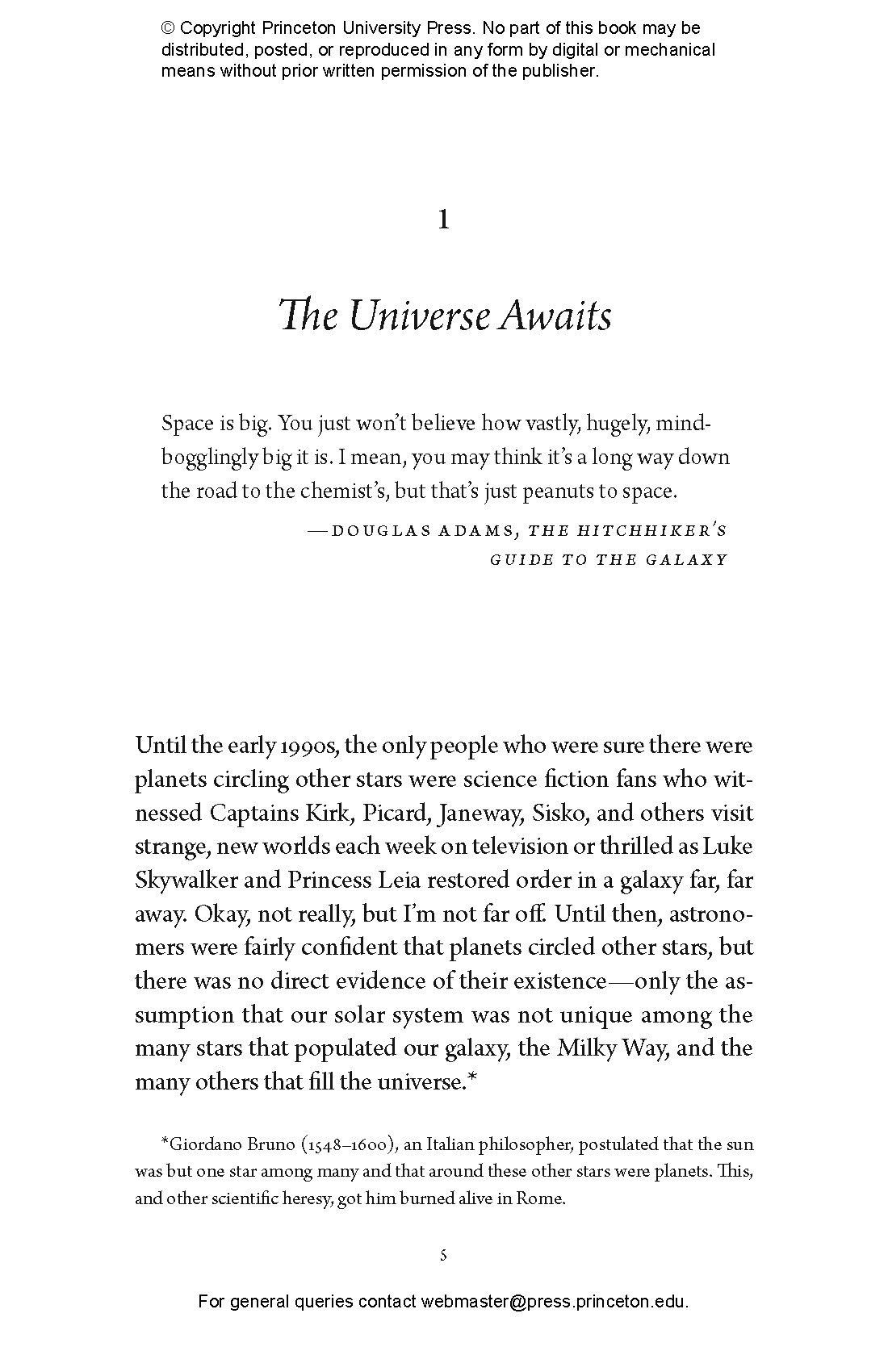 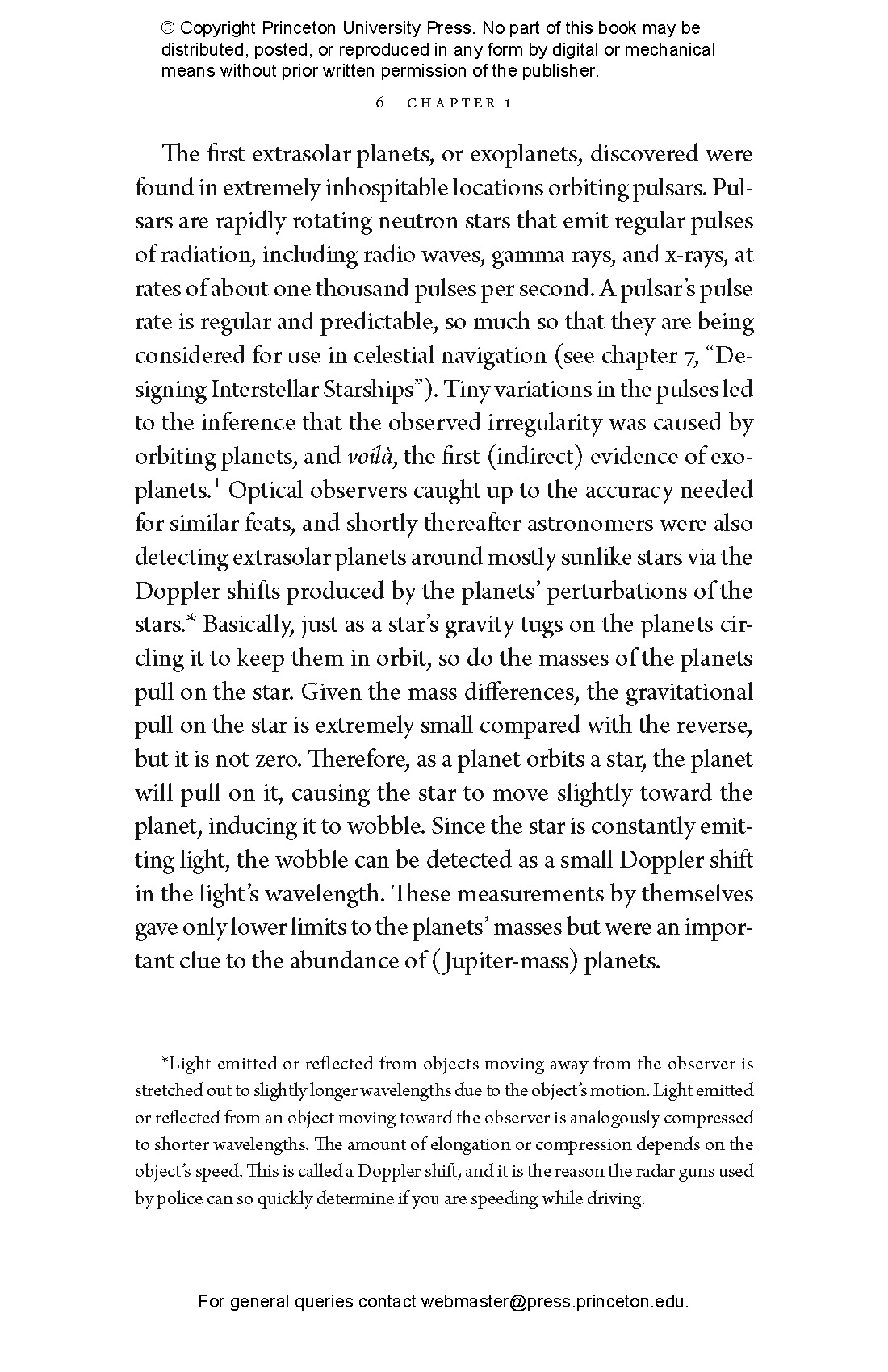 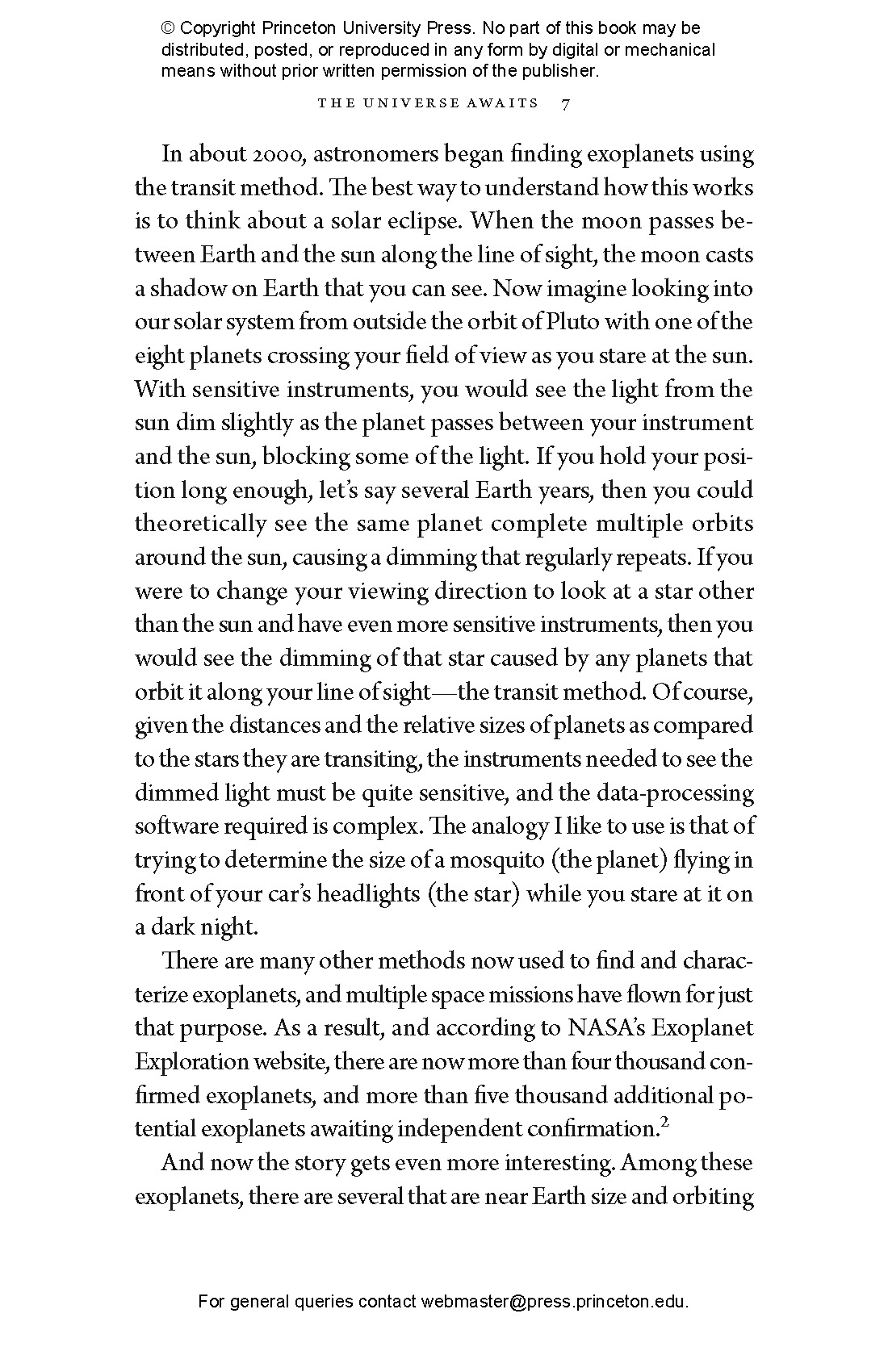 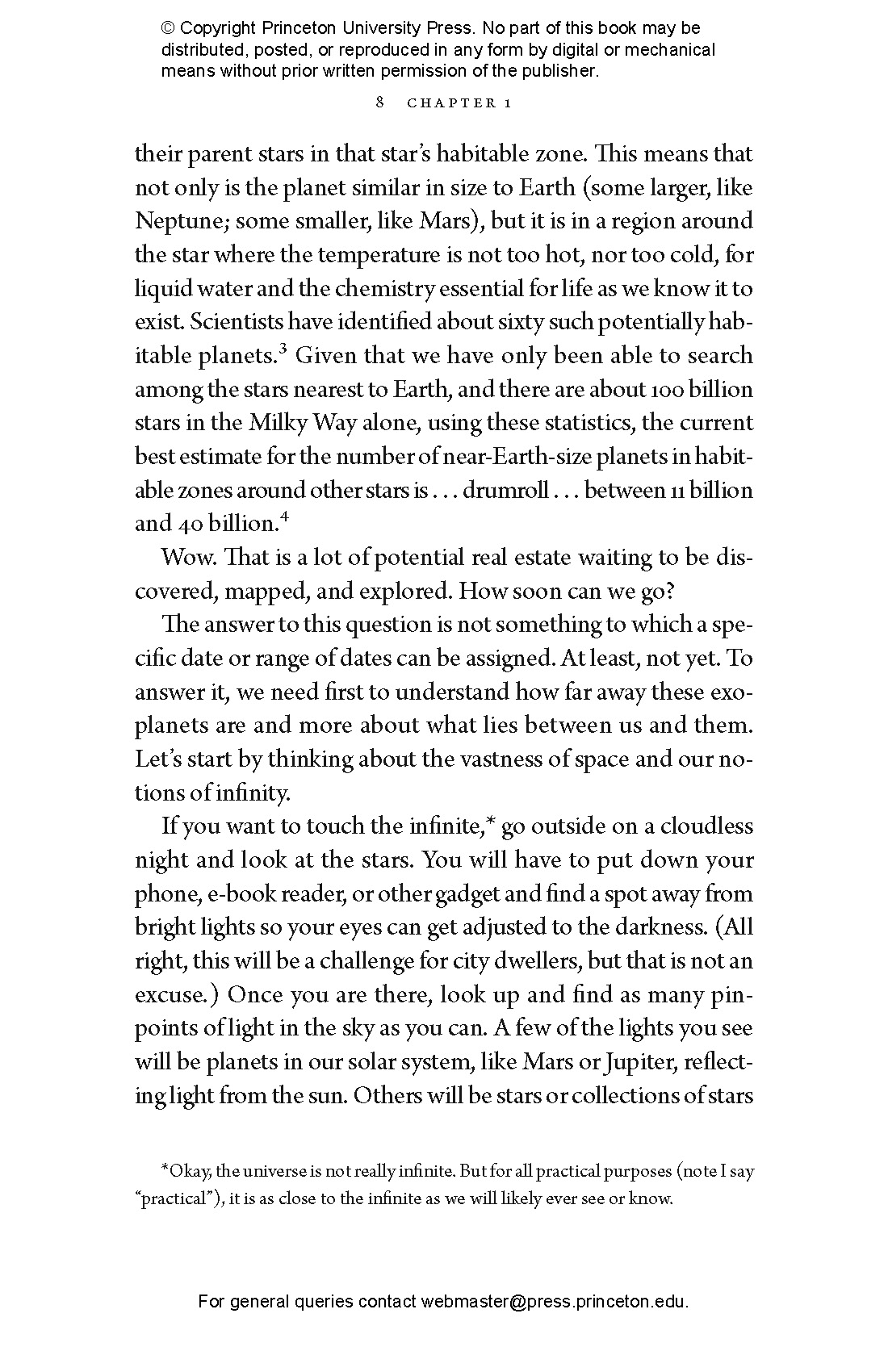 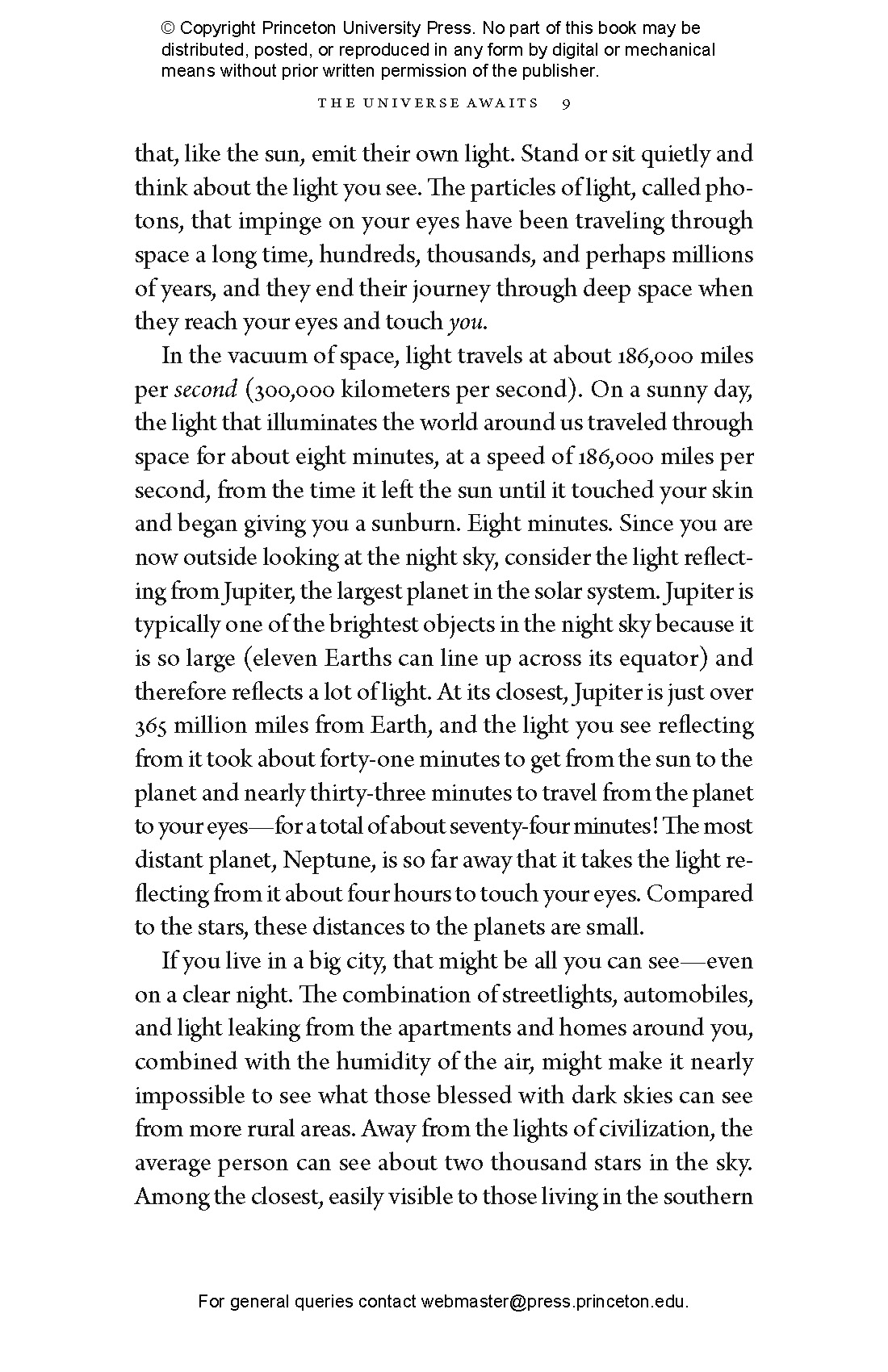 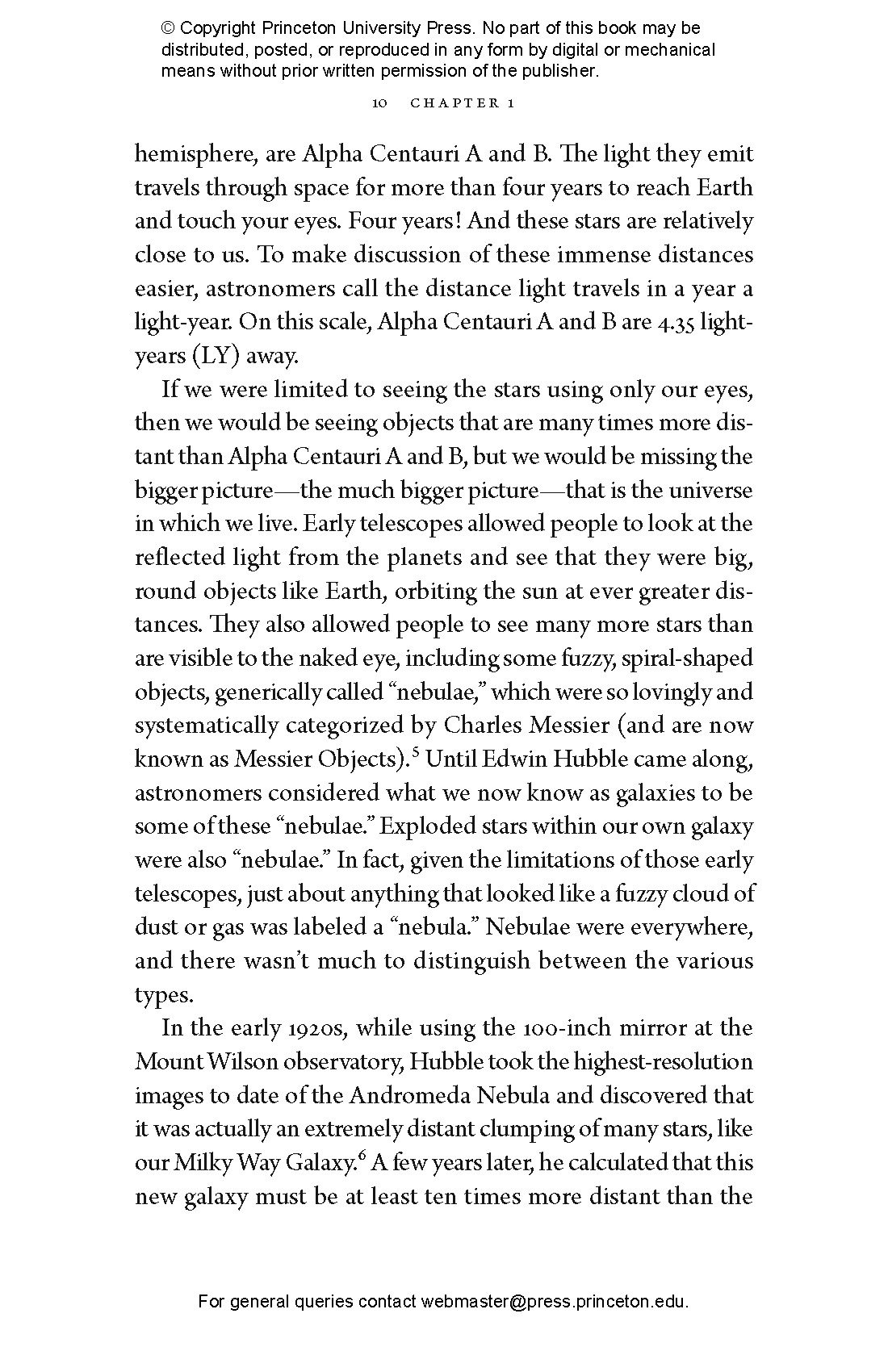 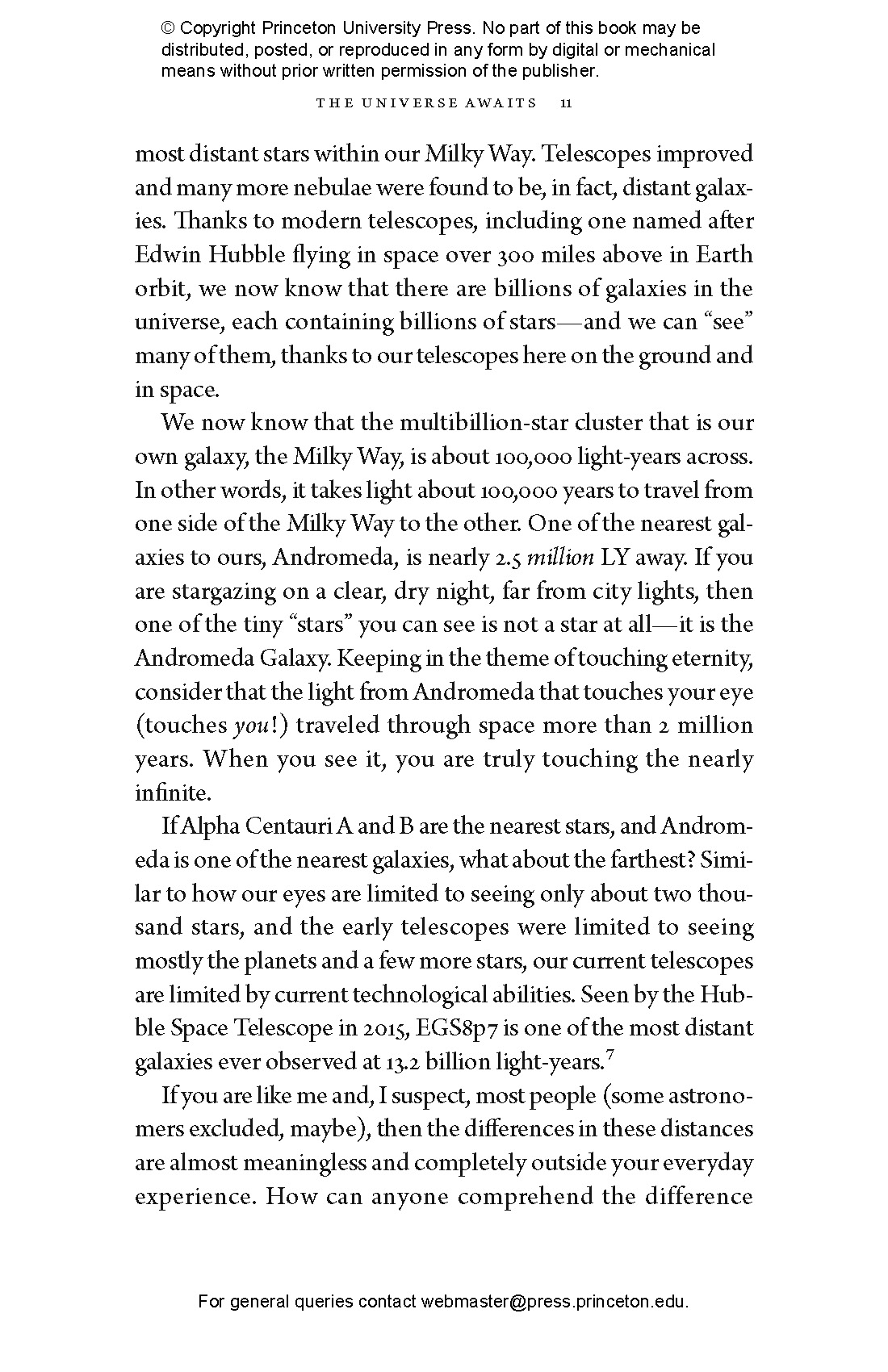 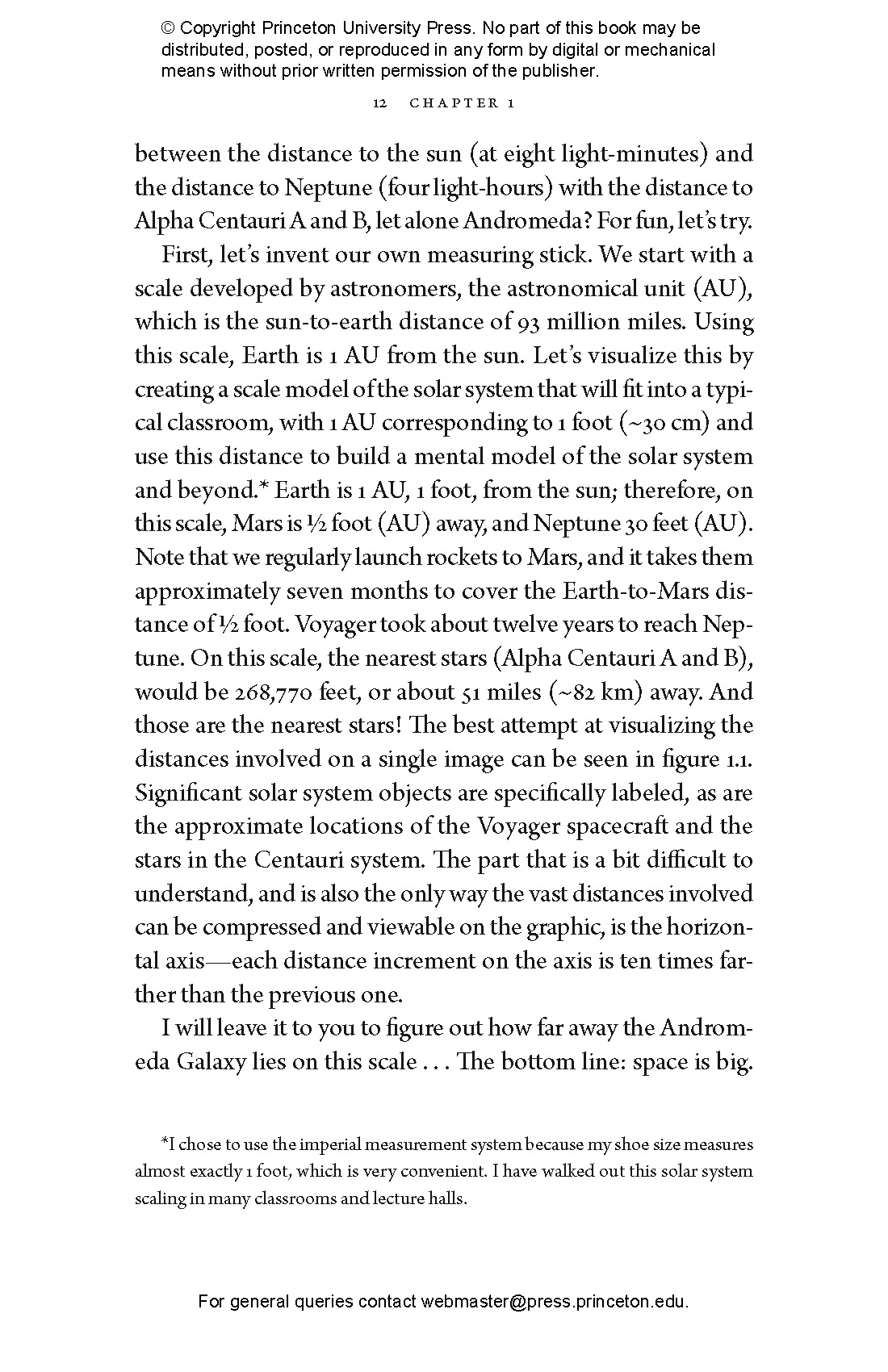 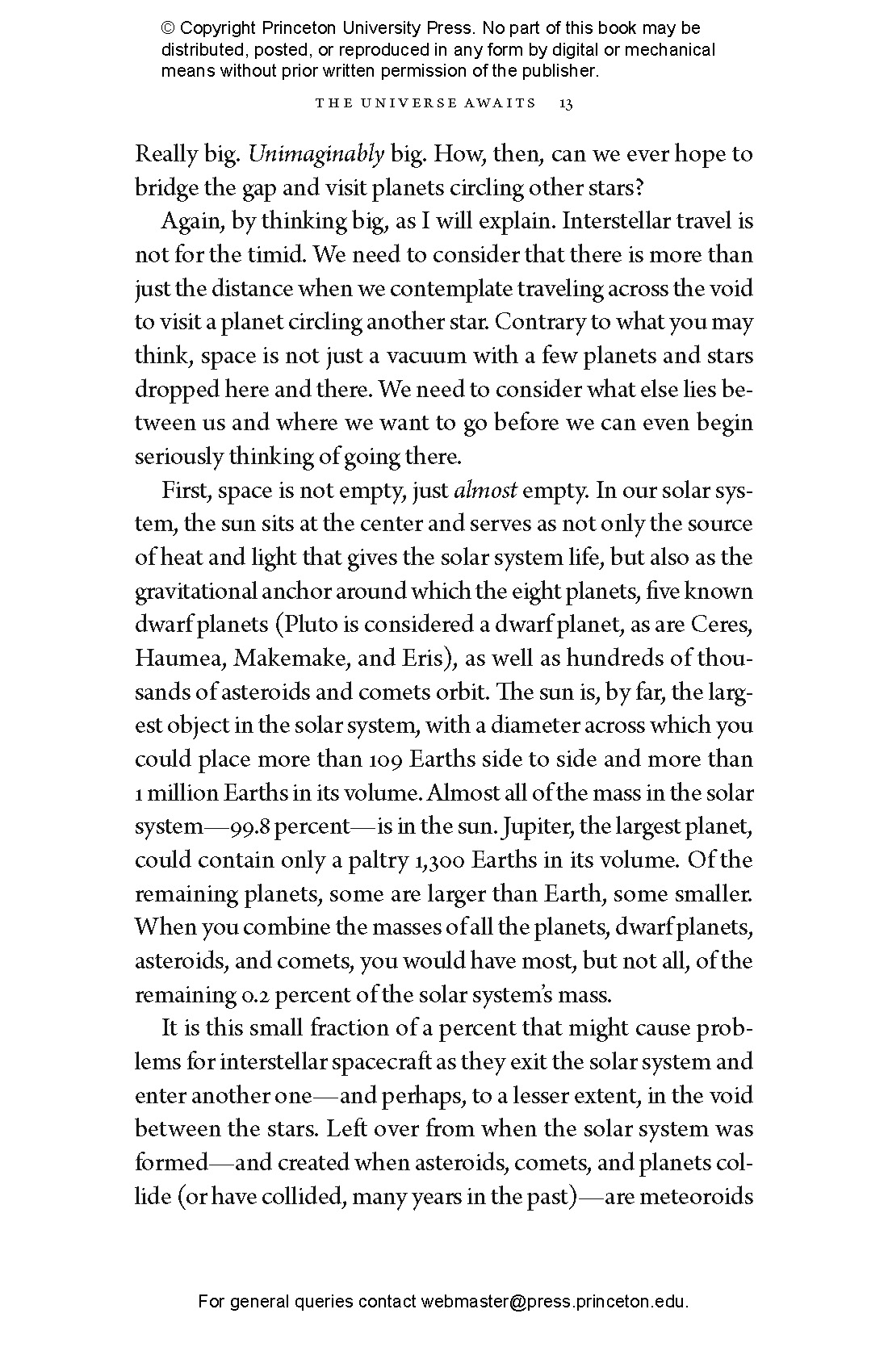 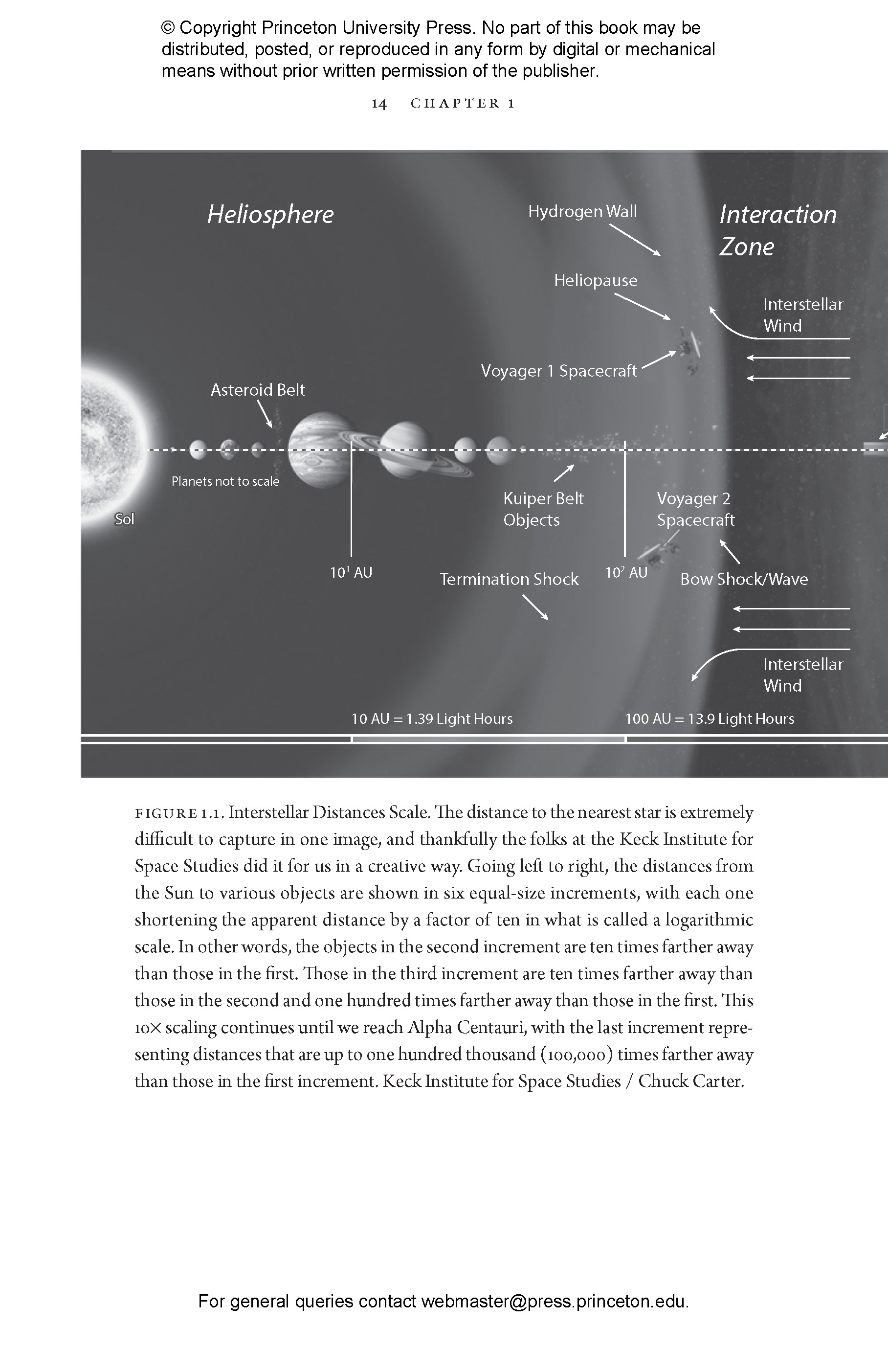 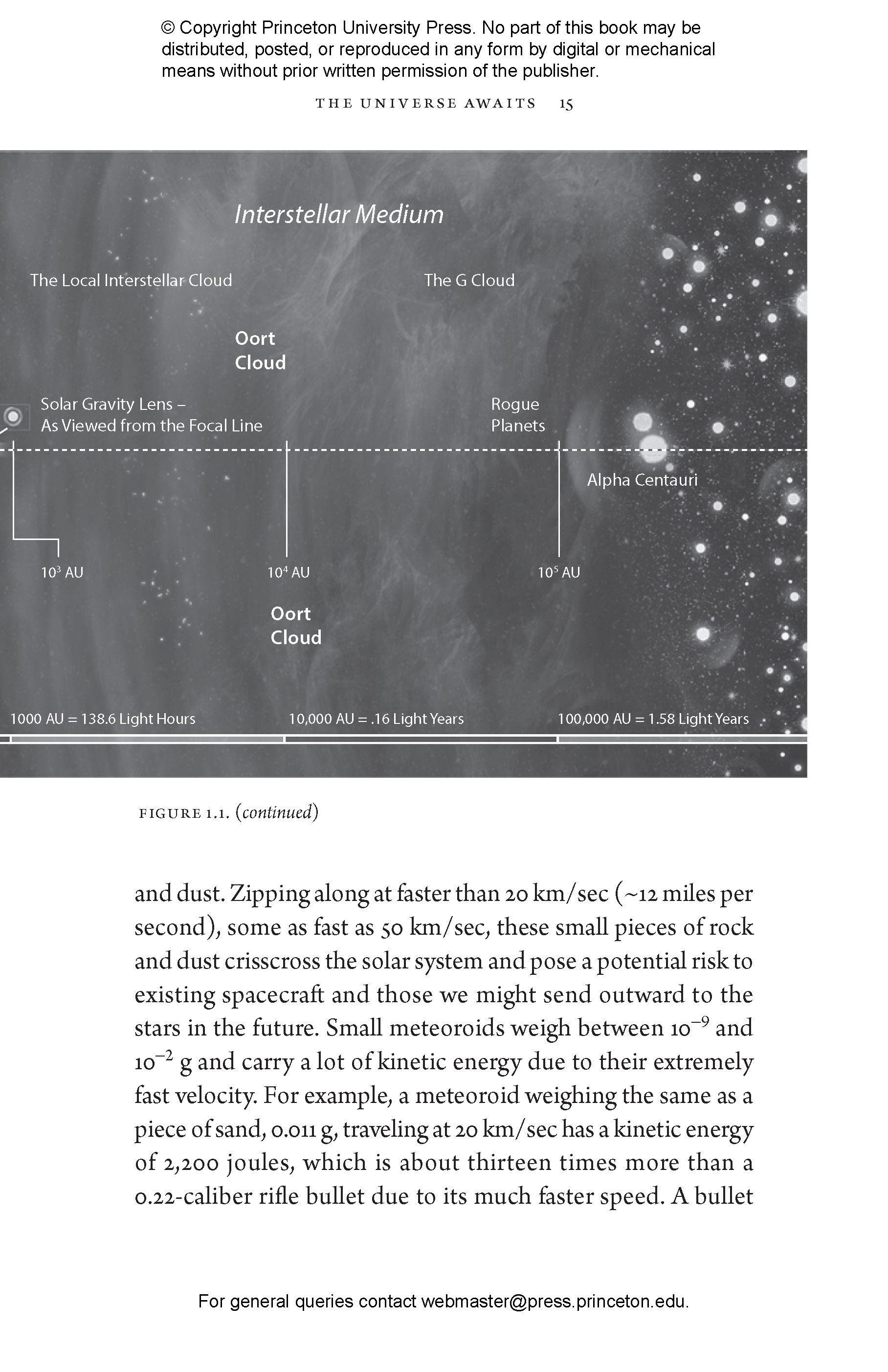 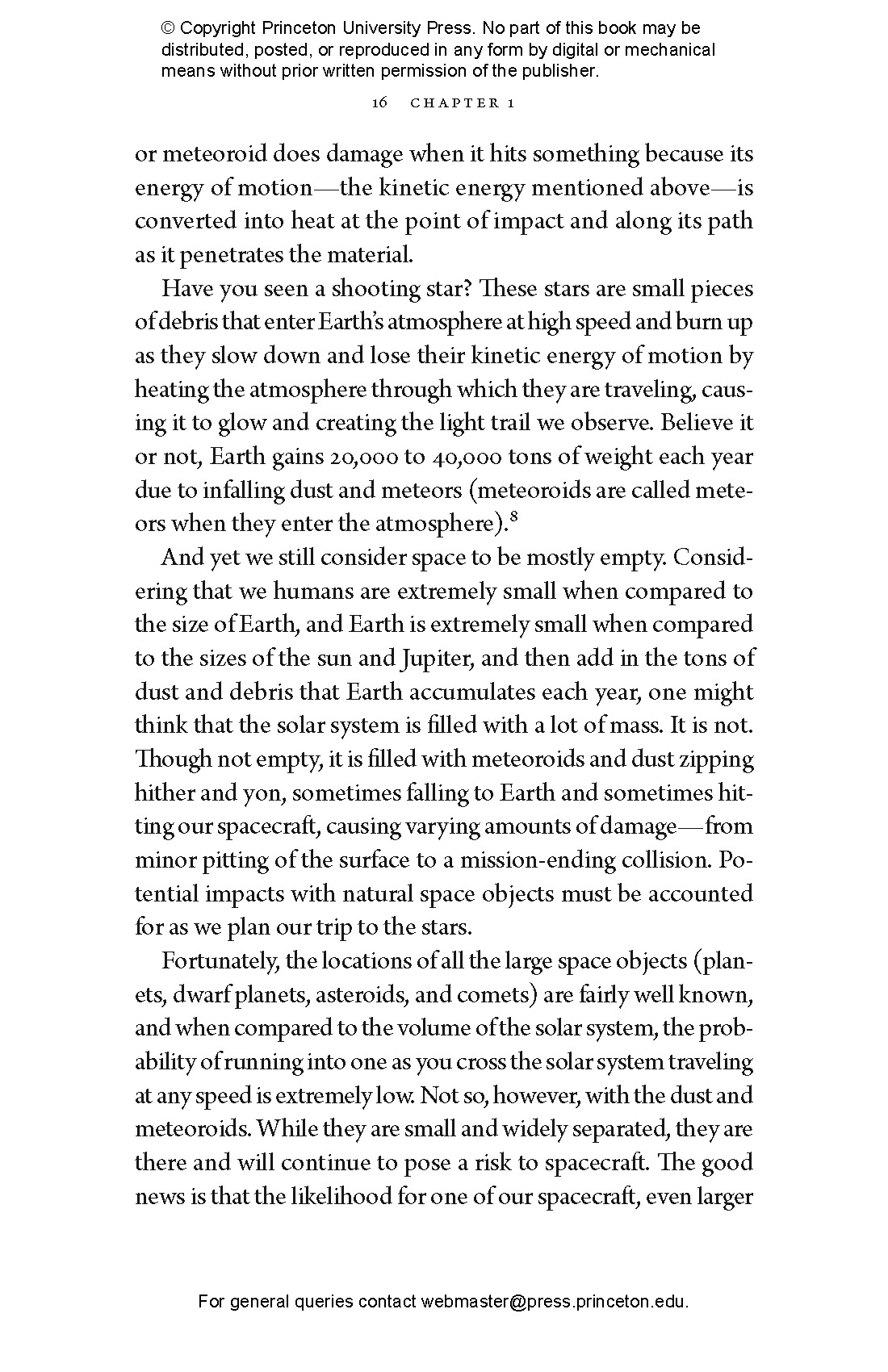 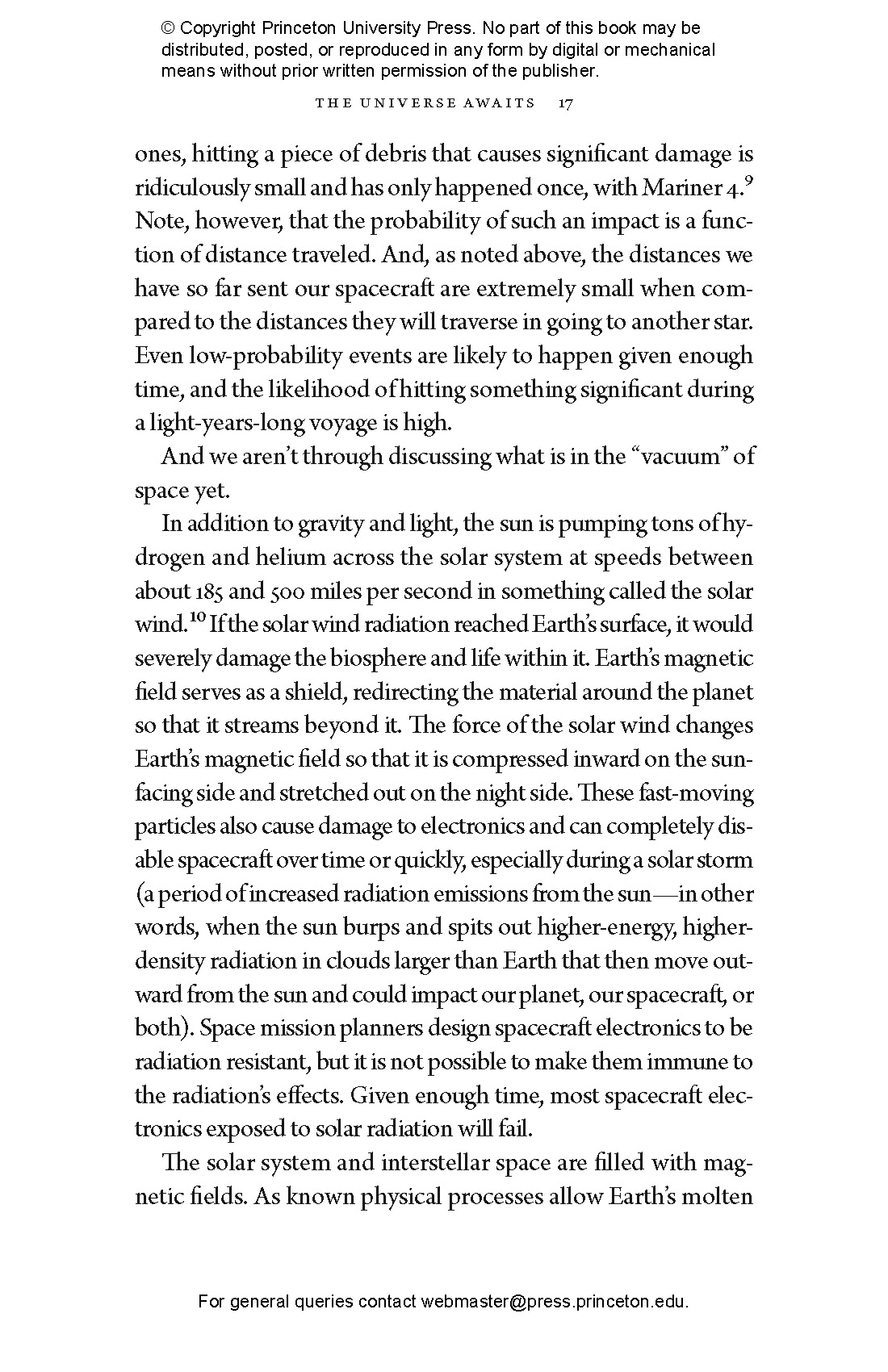 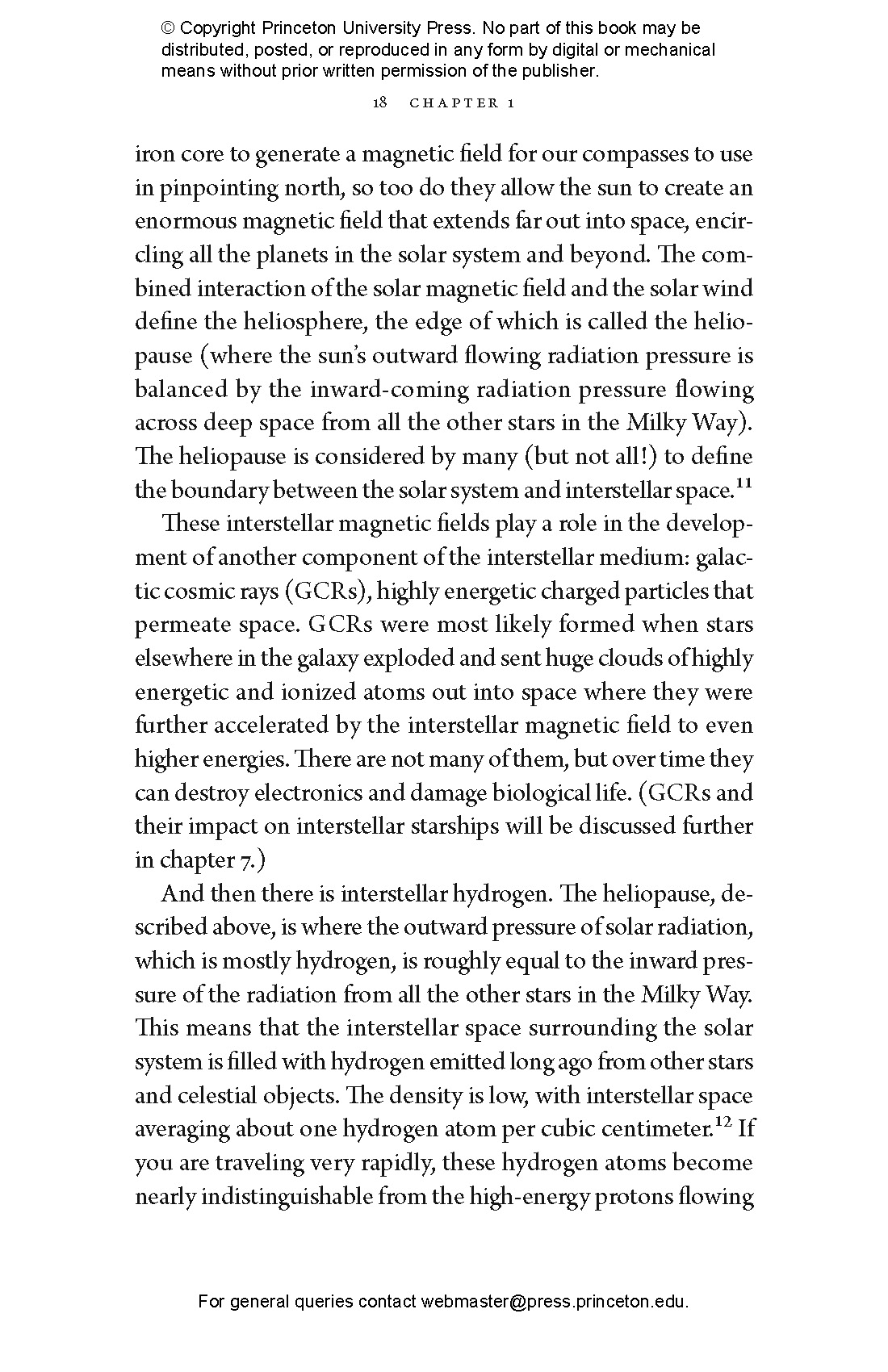 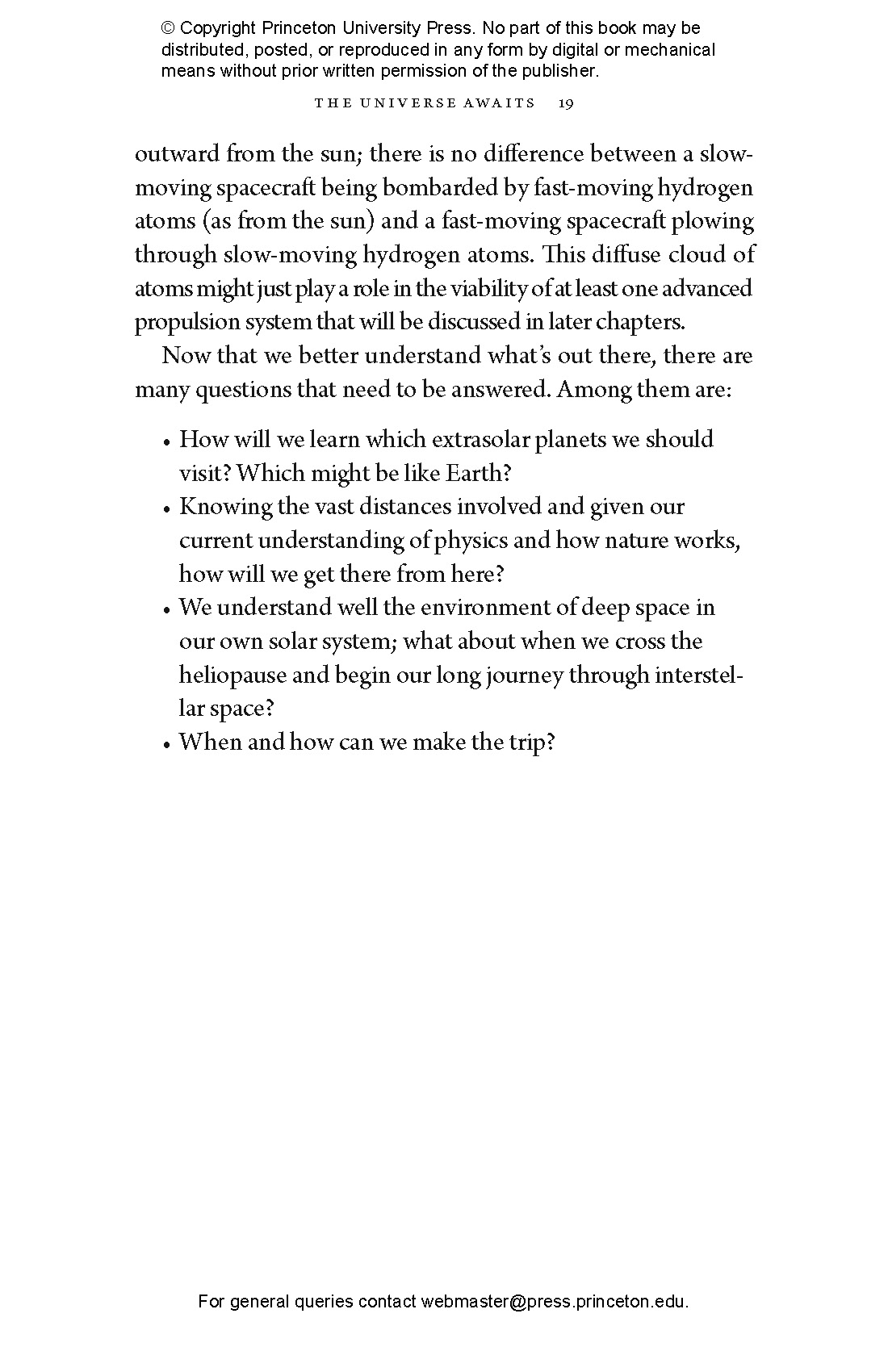 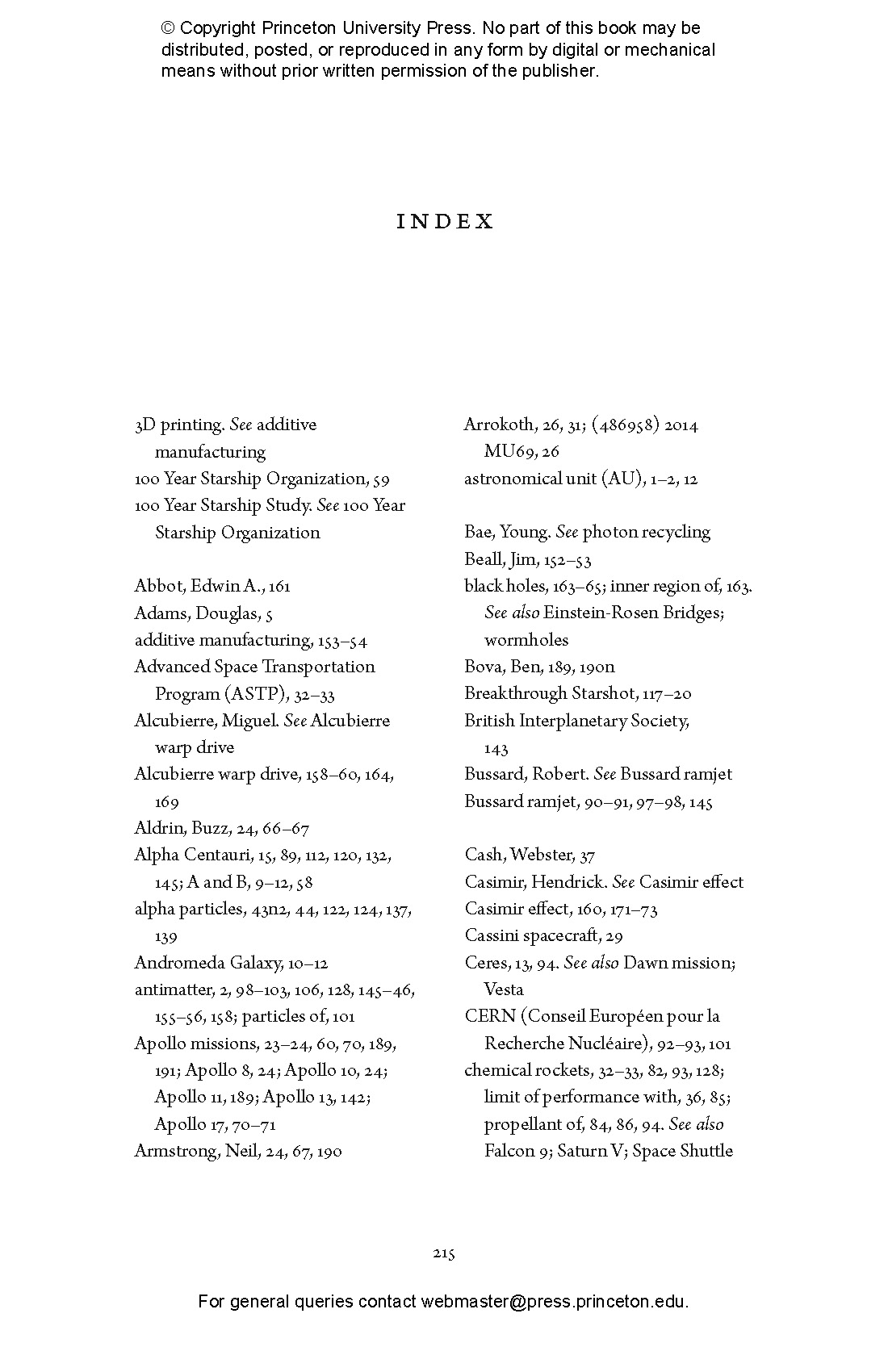 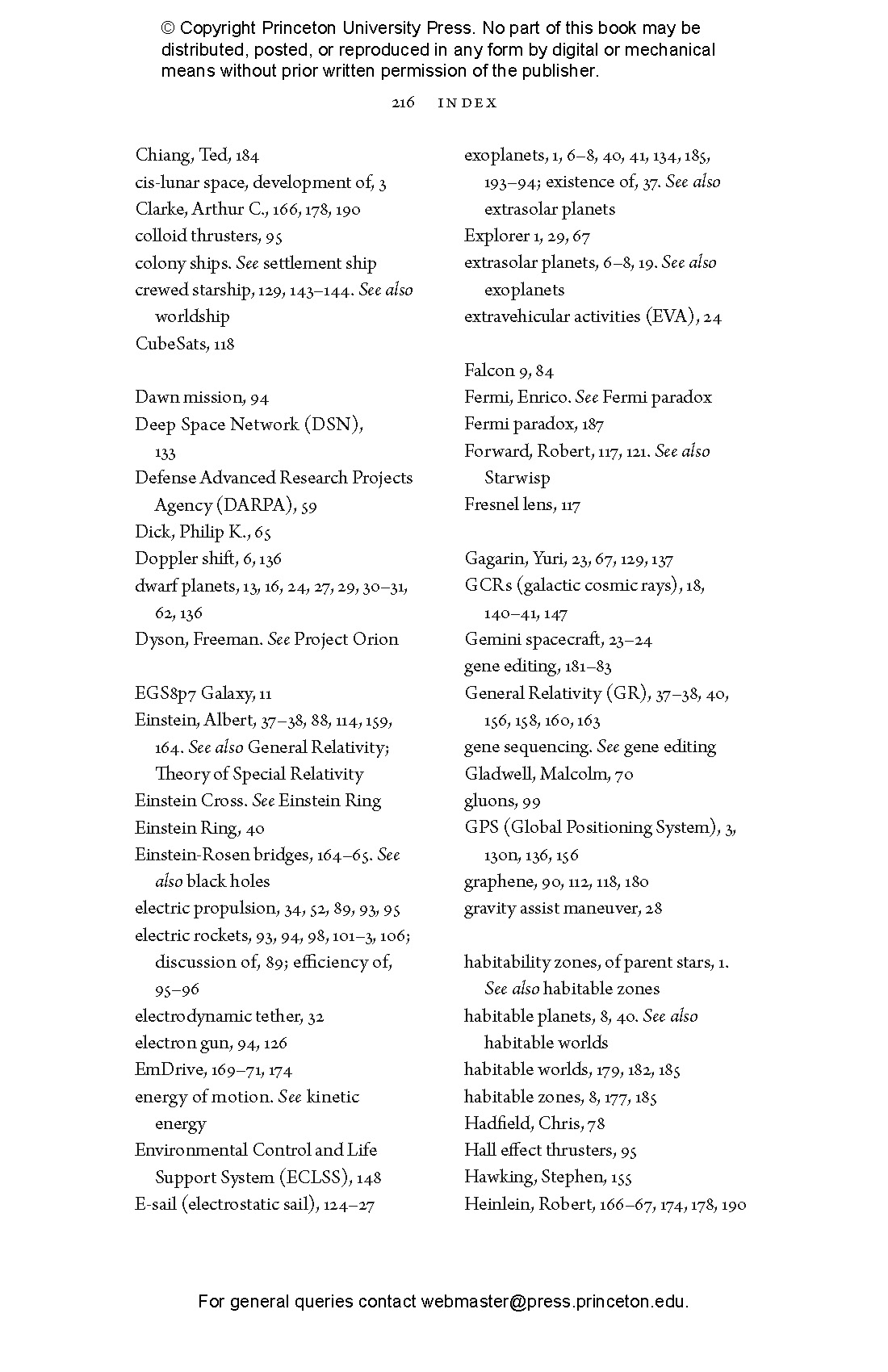 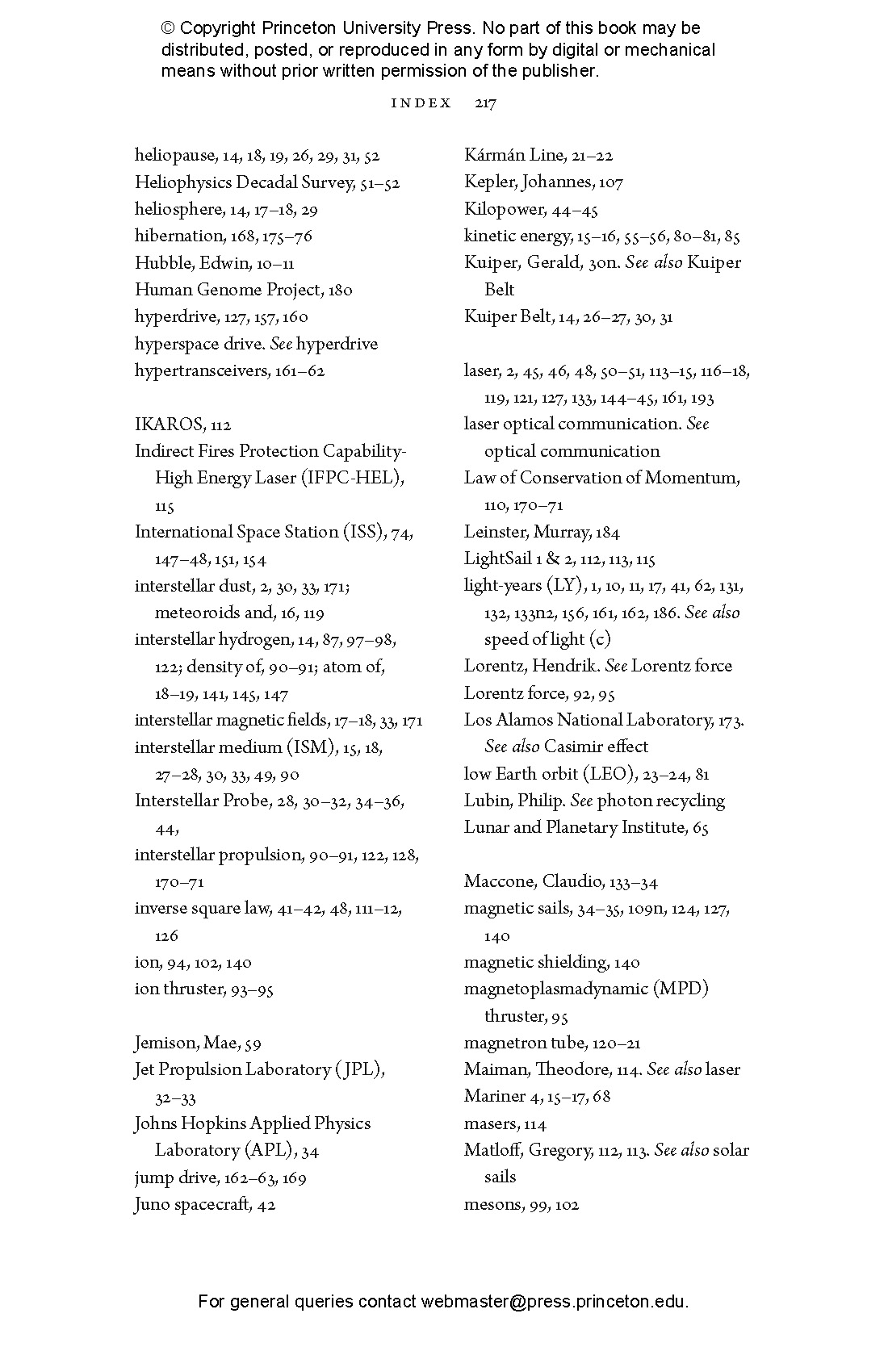 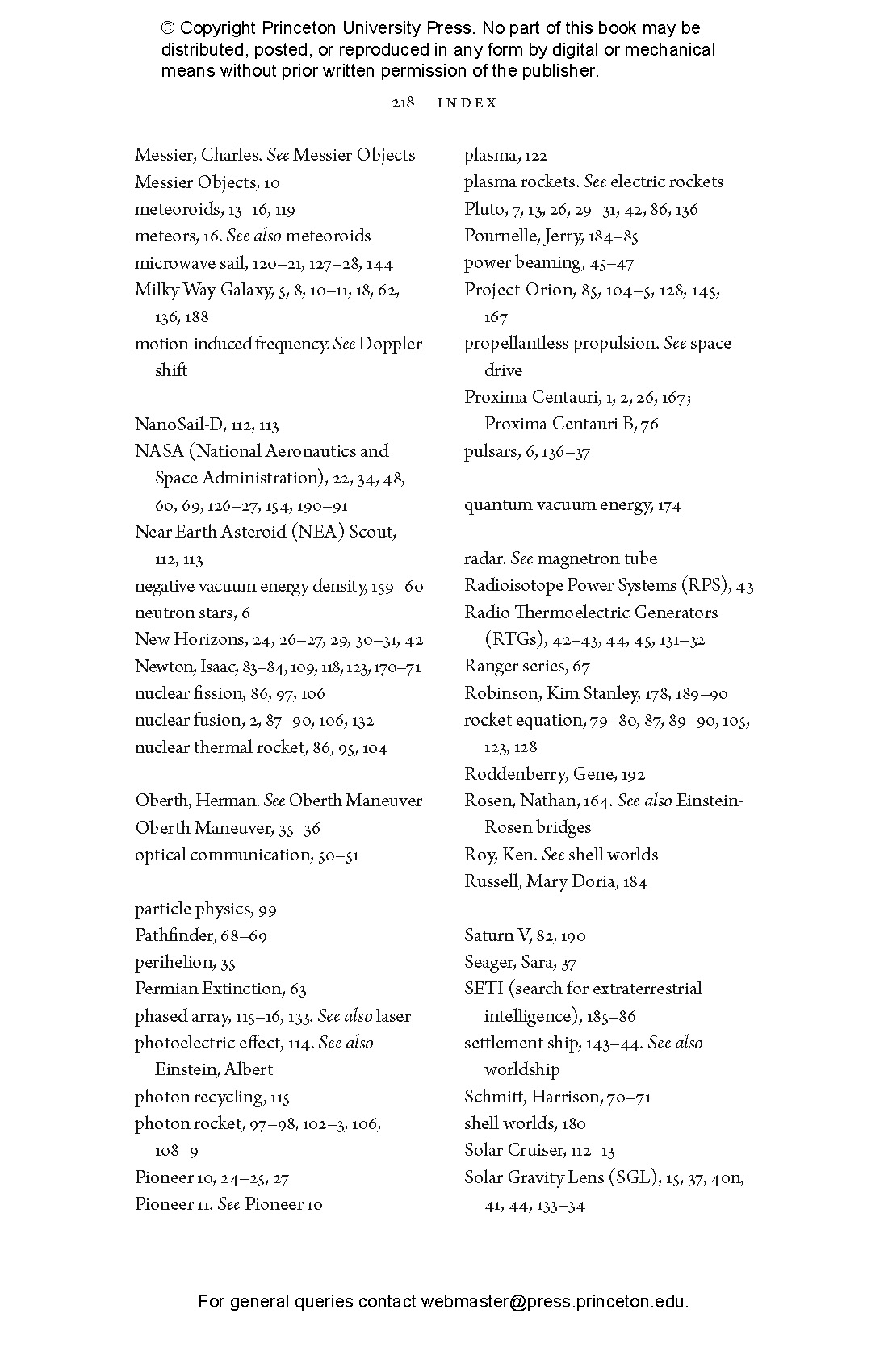 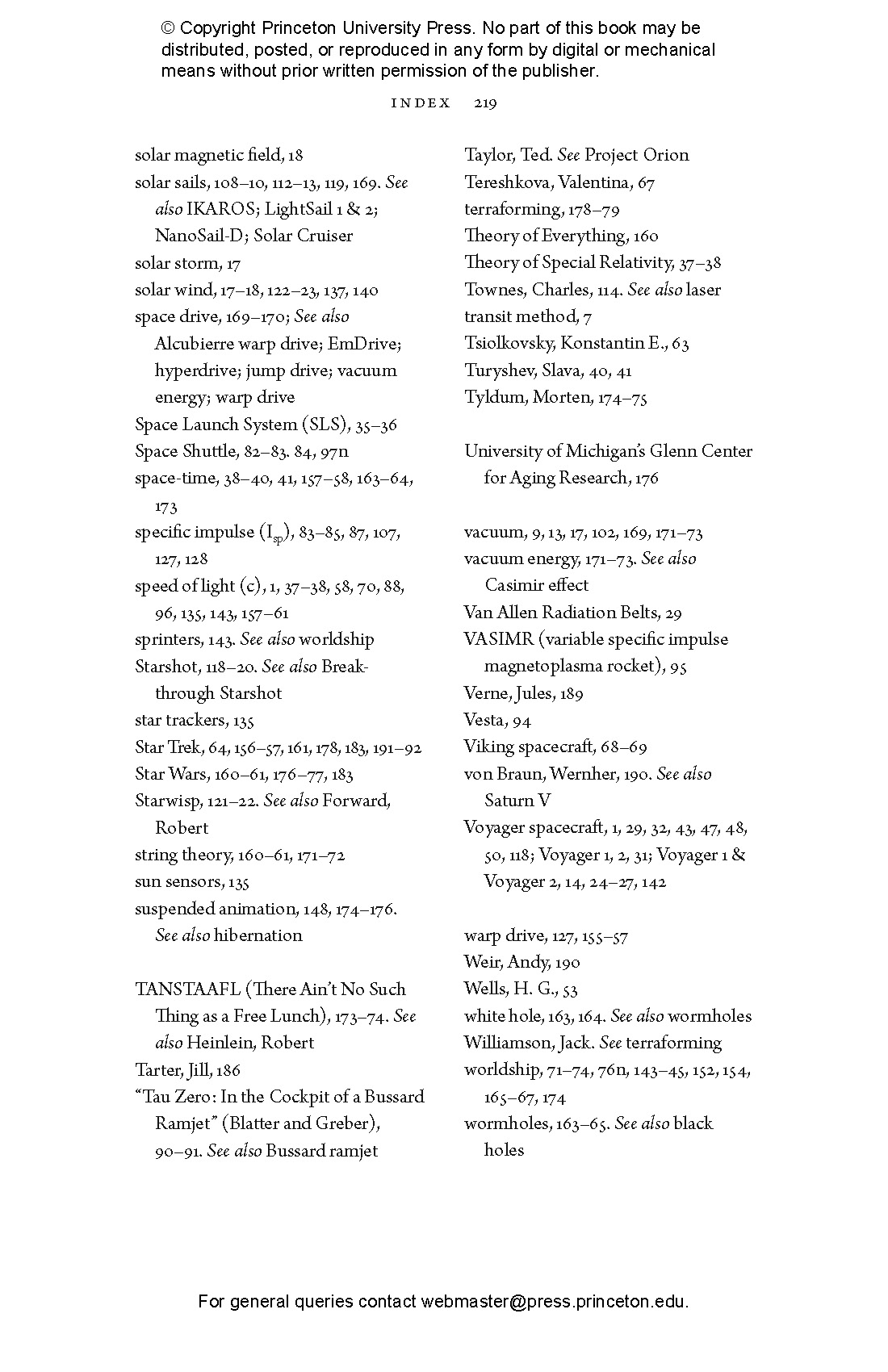 A brief guide to the real science of interstellar travel 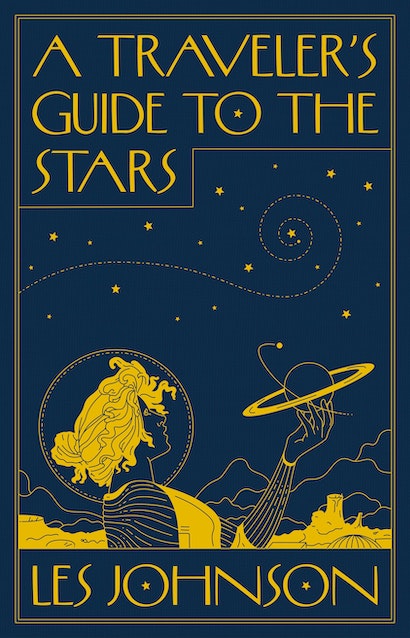 With known exoplanets now numbering in the thousands and initiatives like 100 Year Starship and Breakthrough Starshot advancing the idea of interstellar travel, the age-old dream of venturing forth into the cosmos and perhaps even colonizing distant worlds may one day become a reality. A Traveler’s Guide to the Stars reveals how.

Les Johnson takes you on a thrilling tour of the physics and technologies that may enable us to reach the stars. He discusses the latest exoplanet discoveries, promising interstellar missions on the not-so-distant horizon, and exciting new developments in space propulsion, power, robotics, communications, and more. But interstellar travel will not be easy, and it is not for the faint of heart. Johnson describes the harsh and forbidding expanse of space that awaits us, and he addresses the daunting challenges—both human and technological—that we will need to overcome in order to realize tomorrow’s possibilities.

A Traveler’s Guide to the Stars is your passport to the next great frontier of human discovery, providing a rare inside look at the remarkable breakthroughs in science and technology that will help tomorrow’s space travelers chart a course for the stars.

Traveling to the stars

Les Johnson is a physicist whose many books include Graphene: The Superstrong, Superthin, and Superversatile Material That Will Revolutionize the World; Solar Sails: A Novel Approach to Interplanetary Travel; and The Spacetime War. He serves as principal investigator for NASA’s first interplanetary solar sail space missions, Near-Earth Asteroid Scout and Solar Cruiser, and lives in Madison, Alabama. 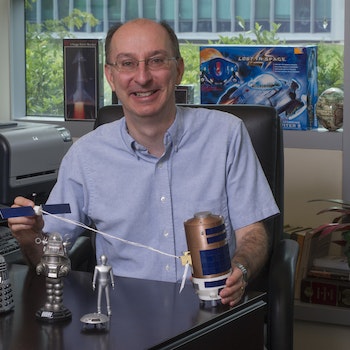 "What will it take to explore a distant star within 100 years? To illuminate the momentousness (and ethics) of sending humans light-years from home, NASA scientist Les Johnson helps us digest mind-boggling numbers—the distance between stars, the energy required to travel that far—while laying out the opportunities and limits of existing technologies. Whether we get there by solar sails or ion thrusters or nuclear bombs, the advances we make in pursuit of interstellar travel will likely also change the way we live on Earth."—Fionna M. D. Samuels, Scientific American

"What will it take to explore a distant star within 100 years? To illuminate the momentousness (and ethics) of sending humans light-years from home, NASA scientist Les Johnson helps us digest mind-boggling numbers—the distance between stars, the energy required to travel that far—while laying out the opportunities and limits of existing technologies. Whether we get there by solar sails or ion thrusters or nuclear bombs, the advances we make in pursuit of interstellar travel will likely also change the way we live on Earth."—Fionna M. D. Samuels, Scientific American

"The stars ... are notoriously far away, as the physicist and NASA technologist Les Johnson vividly emphasizes ...The nearest, Proxima Centauri, would take many millennia to reach. Some science-fiction writers, Mr. Johnson explains, have therefore imagined multigenerational “worldships”.... But what will power their vessels? The author entertainingly describes sci-fi options such as warp drives and hyperspace, as well as potentially feasible ones such as antimatter drives, and definitely possible methods such as ion drives, solar sails and nuclear-pulse propulsion, the last involving dropping a continuous series of nukes out the back of your spacecraft and riding the blast waves."—Wall Street Journal

“We effortlessly travel round and round our sun, and we wonder: How hard would it be, really, to travel to another star? Les Johnson shows us the rocket science we’d need; that’s easy enough. But then he describes with wonderful detail the Starshot nanocrafts, chipsats, Starwisps, worldships, and metamaterial LightSails that we might use. It’s a flight of imagination backed up with real out-of-this-world science.”—Bill Nye, CEO of the Planetary Society

“Les Johnson has written a fascinating book. He takes us on a fantasy interstellar voyage—and teaches us a lot of physics and engineering along the way.”—Martin Rees, author of On the Future: Prospects for Humanity

“Les Johnson takes us on a delightful, fascinating, and mind-bending journey to the stars. You will never see the night sky in the same way again. From ion rockets and solar sails to fusion engines and even warp drive, Johnson pushes the boundaries of where physics ends and our imagination begins. This book is a must-read for anyone interested in the ultimate destiny of humanity, to be among the stars.”—Michio Kaku, author of the bestseller The God Equation: The Quest for a Theory of Everything

“Les Johnson is that rare breed of writer who can make rocket science comprehensible even to the layperson. He has more than paid his dues in the field, and his enthusiasm for the cause of interstellar exploration shines through. But so does his sense of humor, his humanity, and his zest for life. This is highly recommended stuff.”—David Weber, bestselling author of the Honorverse series

“Space tourism is taking off, but Earth orbit is no more than a half day’s drive straight up. A Traveler’s Guide to the Stars explores the technologies that could take us billions of times farther, breaking the bonds that tie us to the solar system. Rooted in physics, this book lays out the options for interstellar travel in rigorous yet accessible ways.”—Chris Impey, author of Einstein’s Monsters: The Life and Times of Black Holes

“Is humanity ready to take on the immensities outside our solar system? This traveler’s guide lays out methods and means that may enable our first steps into the great unknown beyond the sun’s familiar campfire.”—David Brin, Hugo Award–winning author of Earth and the Uplift Saga

“Les Johnson makes the complicated subject of interstellar spaceflight comprehensible to nonexperts. He carefully walks readers through the myriad physical, technical, biological, social, and even ethical challenges we must overcome to visit neighboring stars, and offers keen insights into how these problems will eventually be resolved.”—L. Dale Thomas, director of the Alabama Space Grant Consortium

“Johnson does a great job of describing the journey traveled by the community of researchers who are striving to make interstellar flight a reality. A Traveler’s Guide to the Stars is an excellent introduction to the subject for anyone interested in knowing more about the frontiers of human space exploration that lie in our near future.”—Kelvin F. Long, astrophysicist, aerospace engineer, and author

“An accessible and authoritative introduction to interstellar flight. Anybody whose interest has been piqued by new astronomical discoveries or who likes science fiction will enjoy this comprehensive and easy-to-understand guide to the real science and engineering behind flying between the stars.”—Mark Hempsell, past president of the British Interplanetary Society