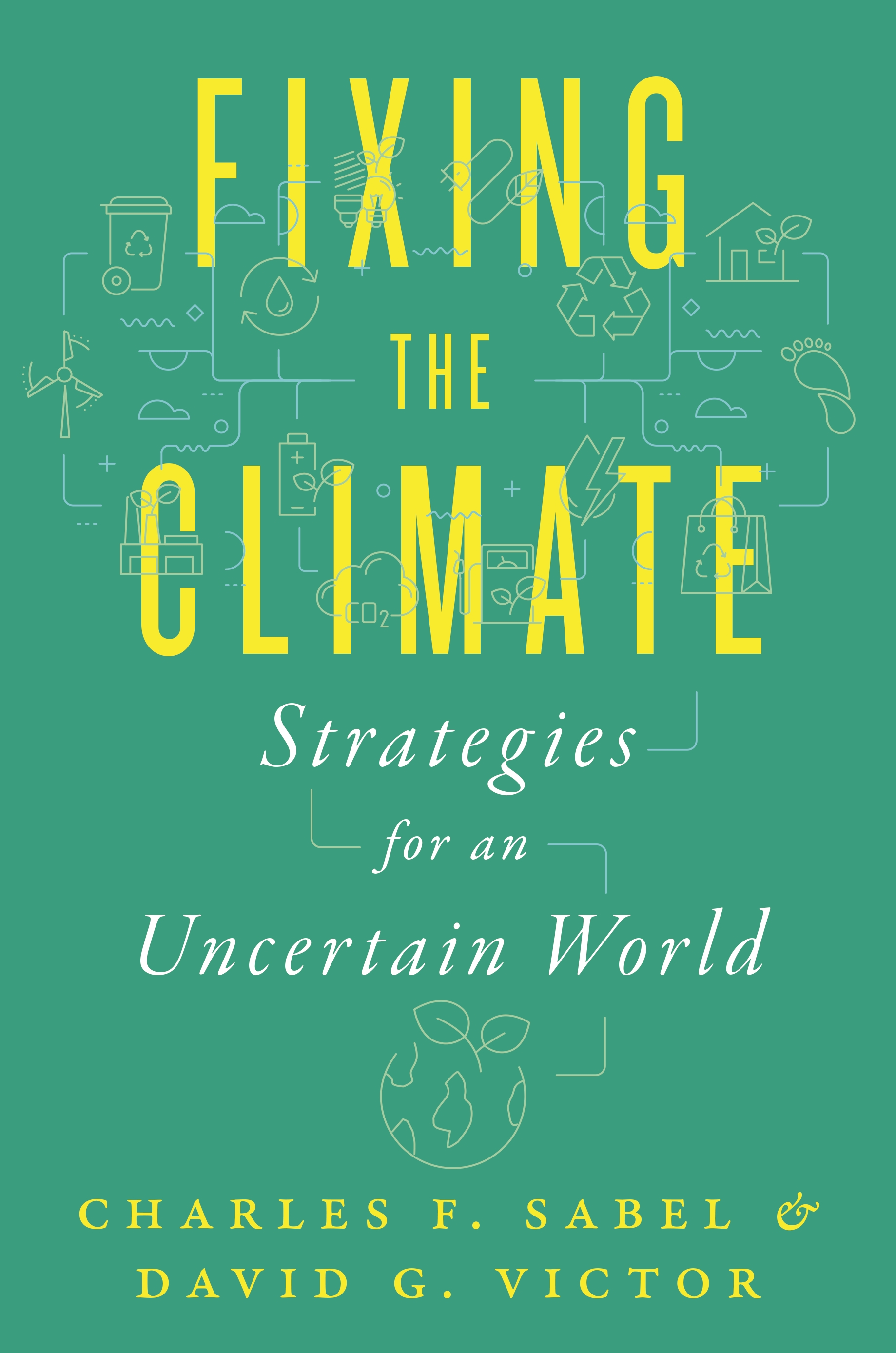 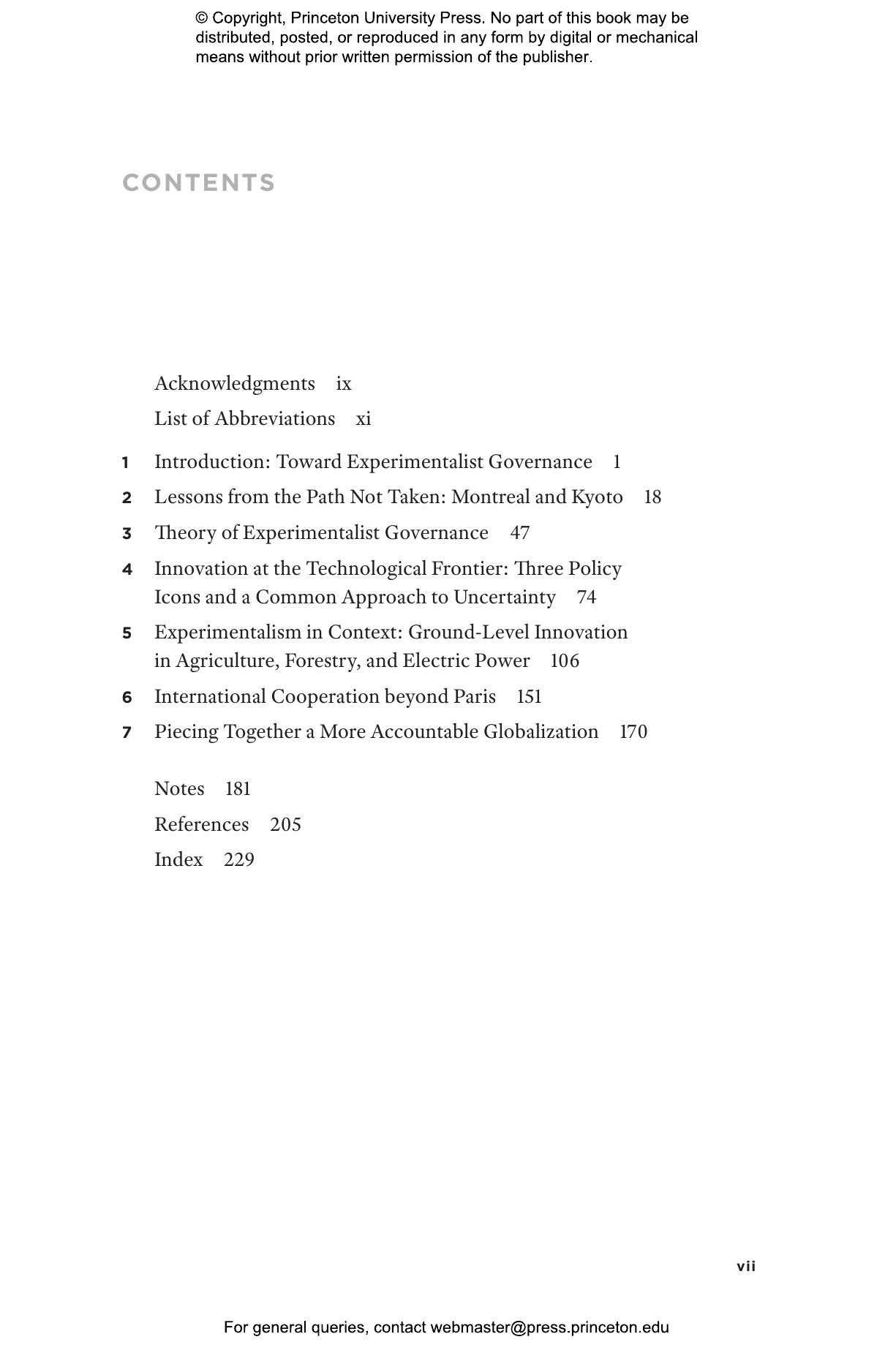 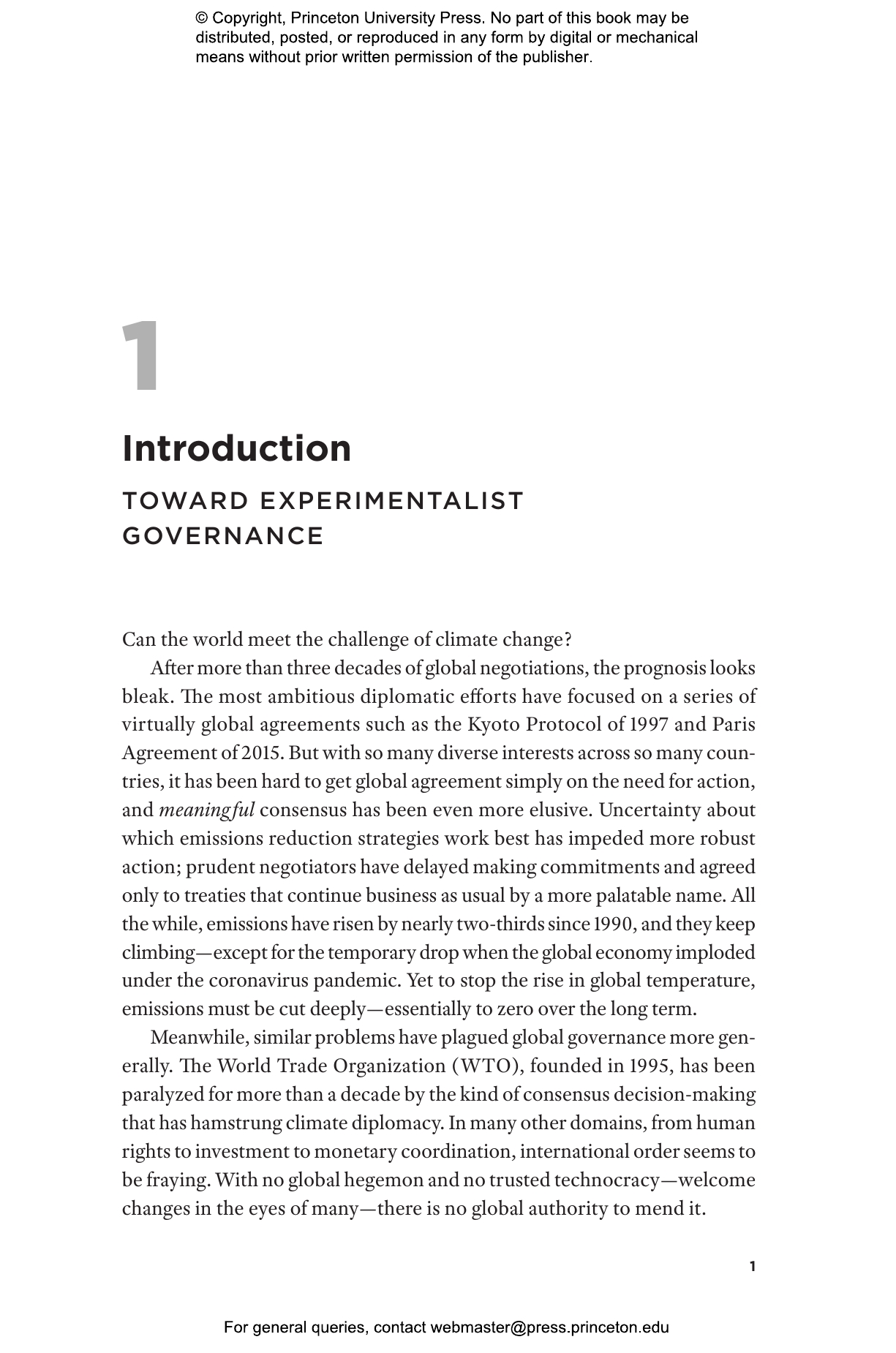 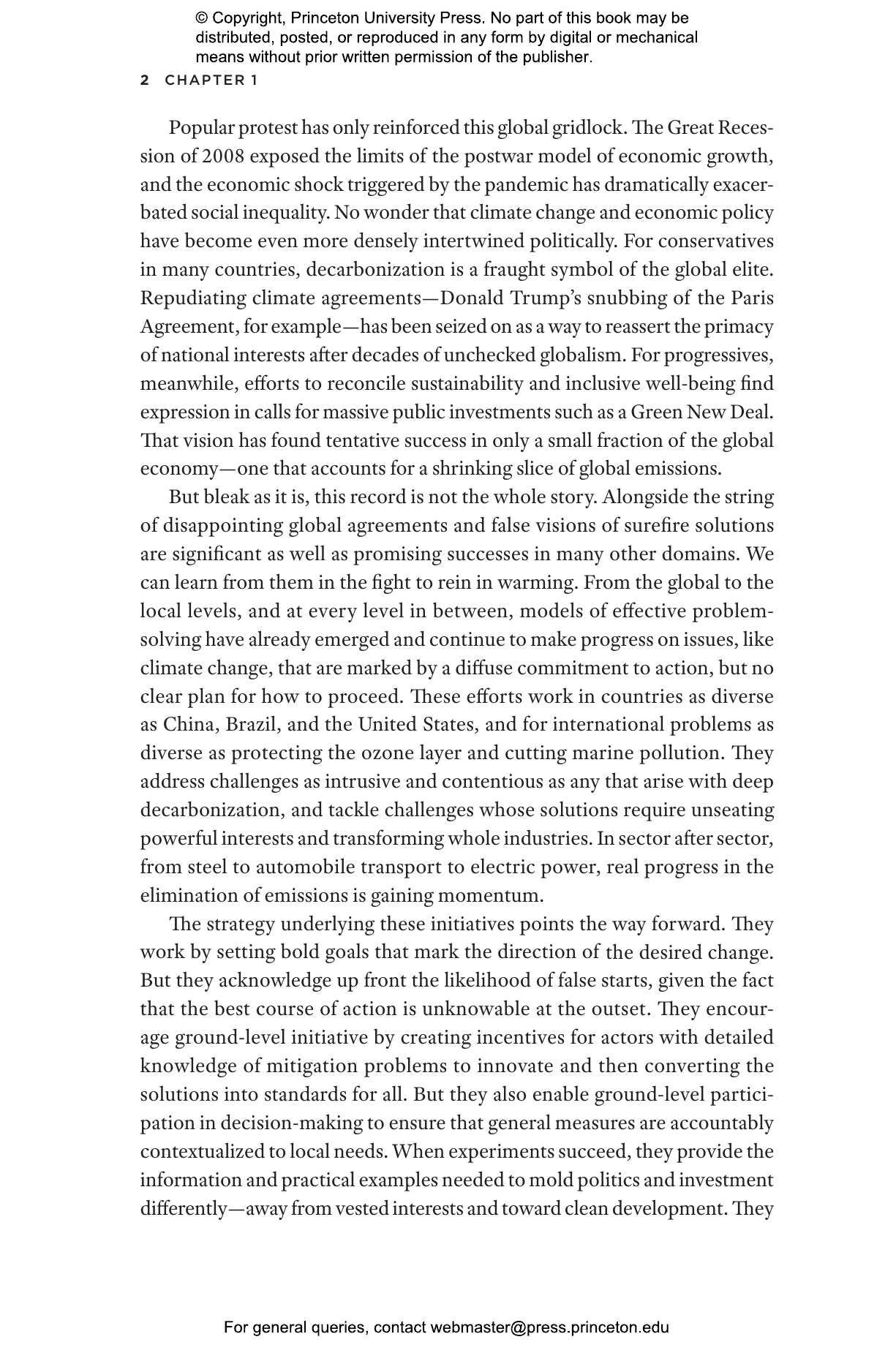 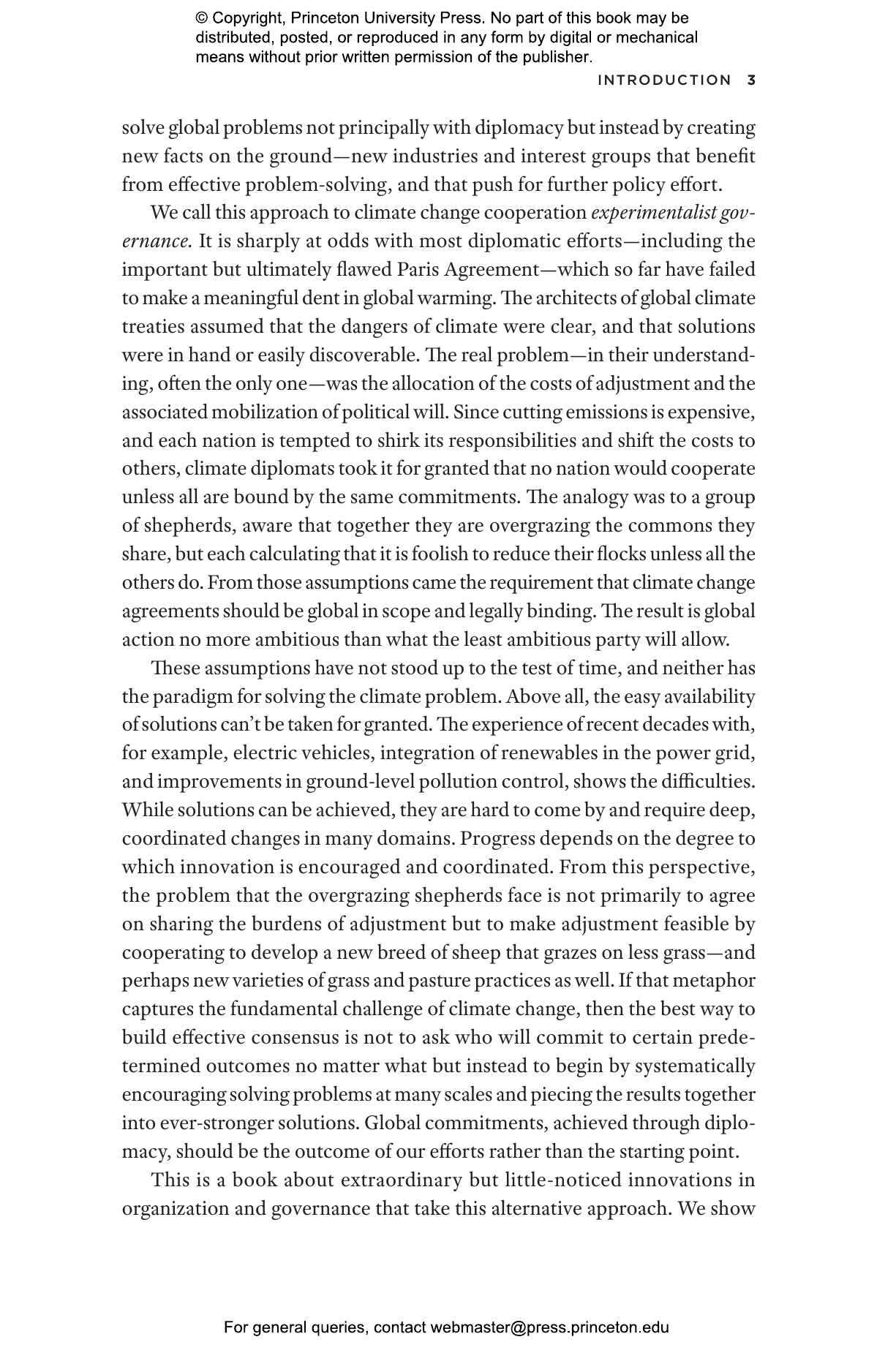 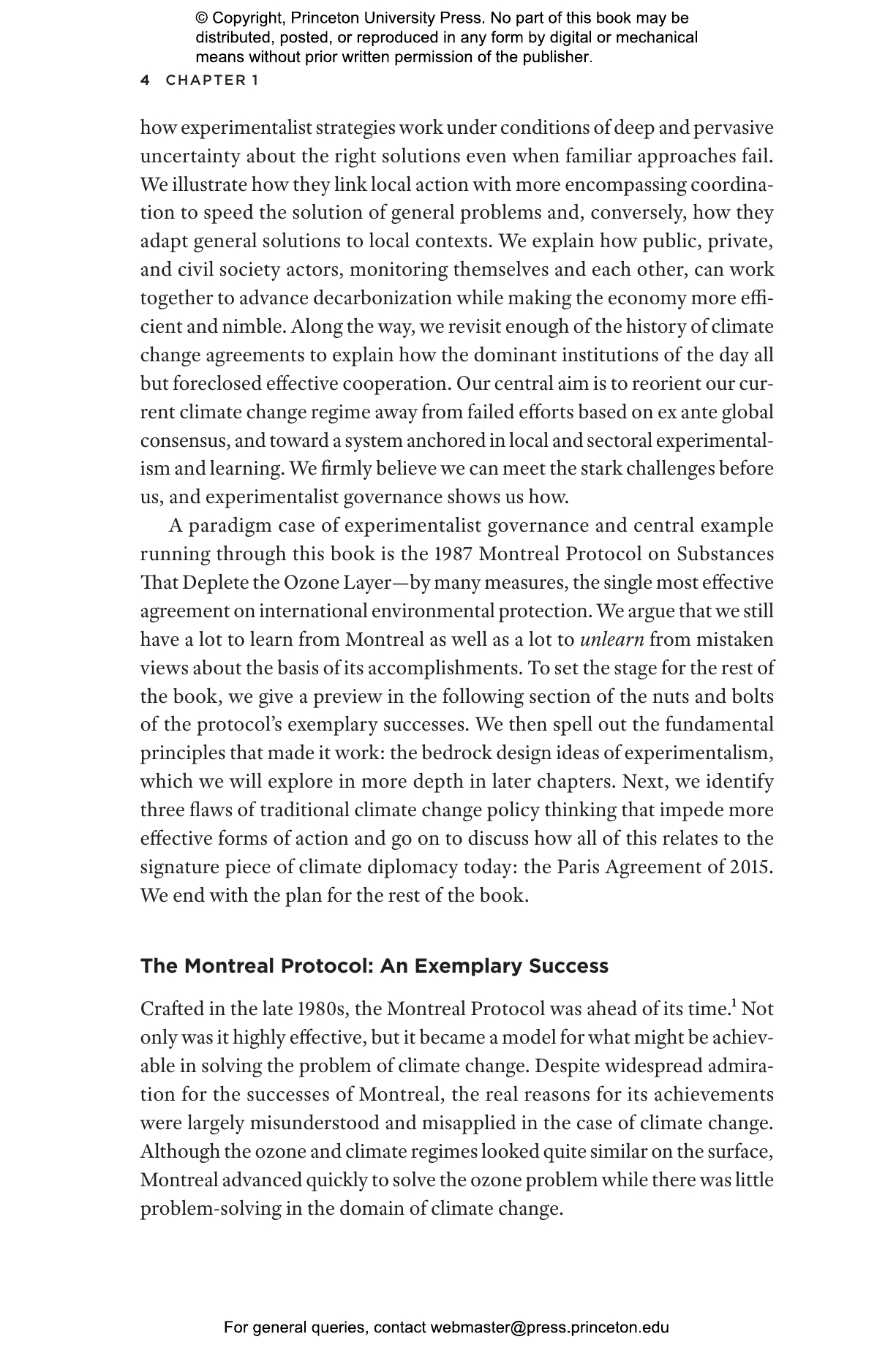 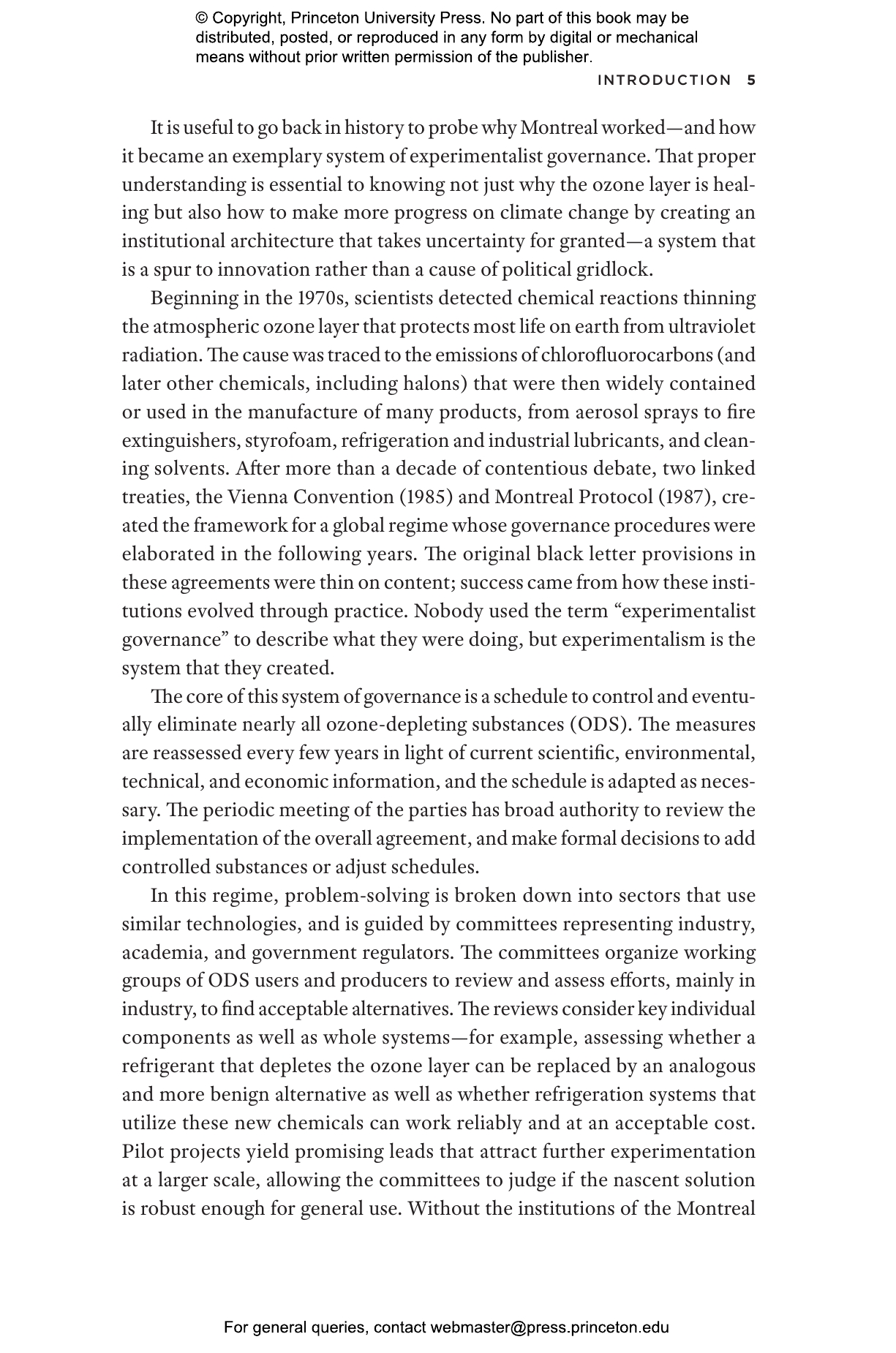 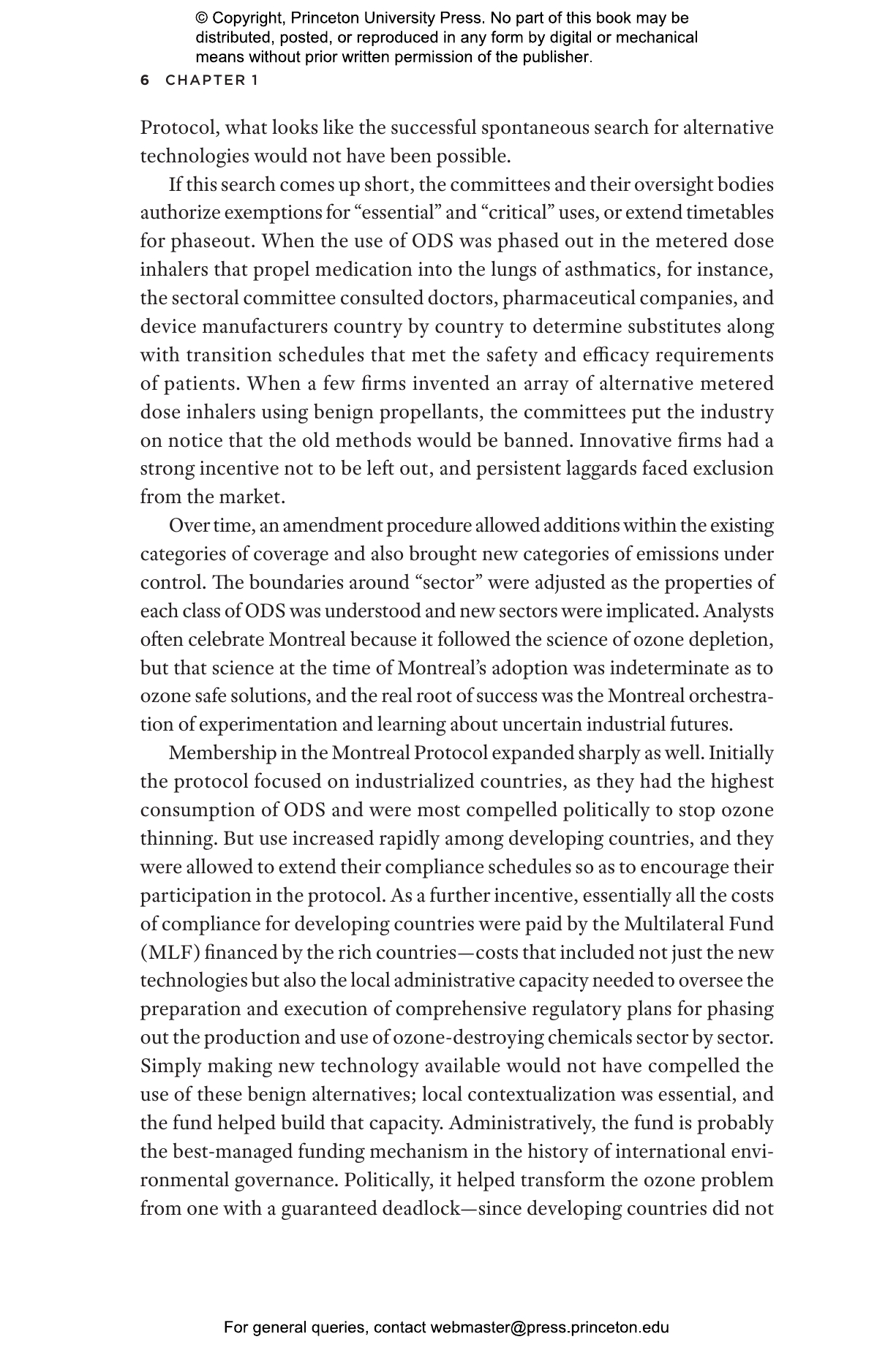 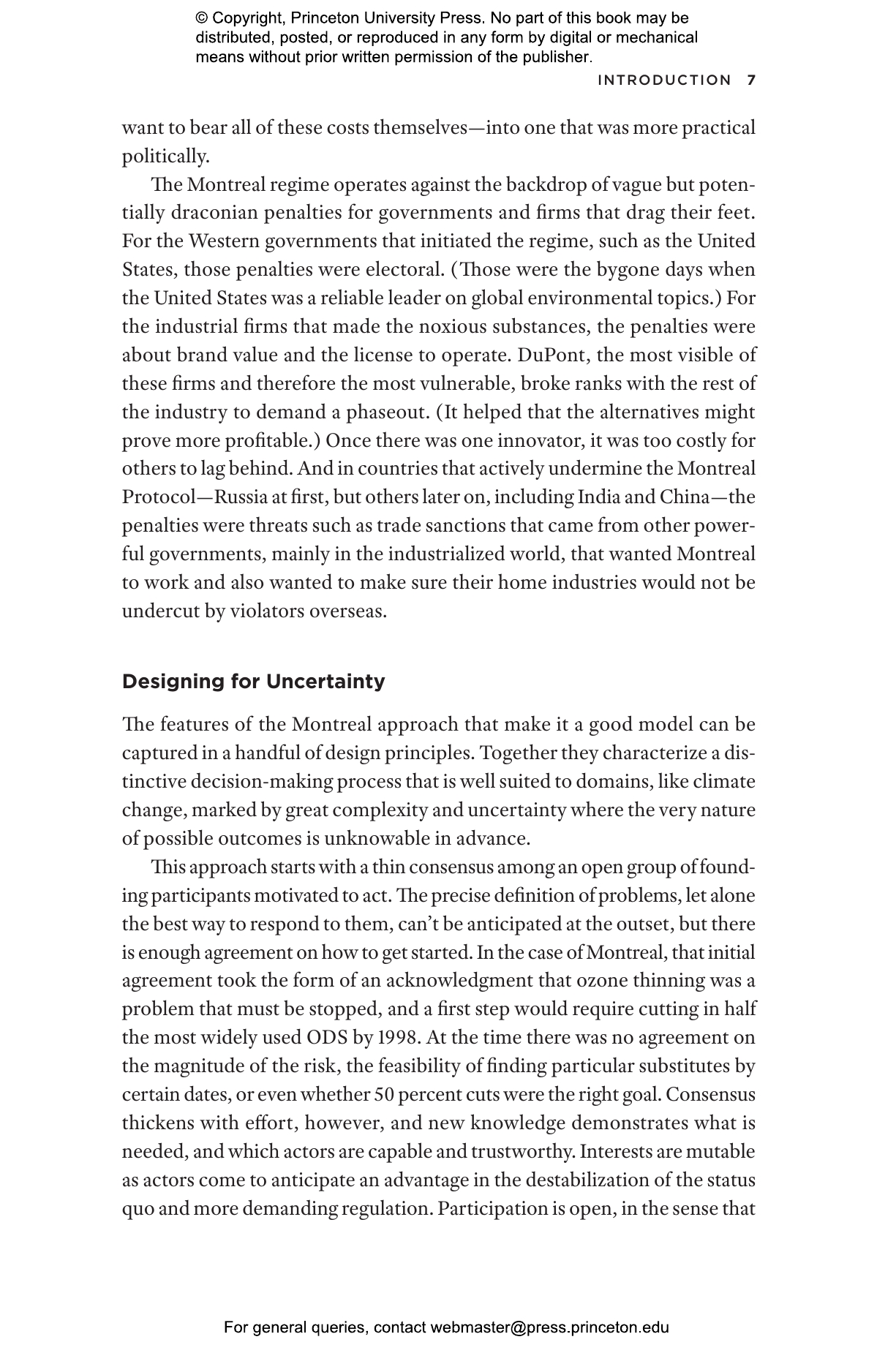 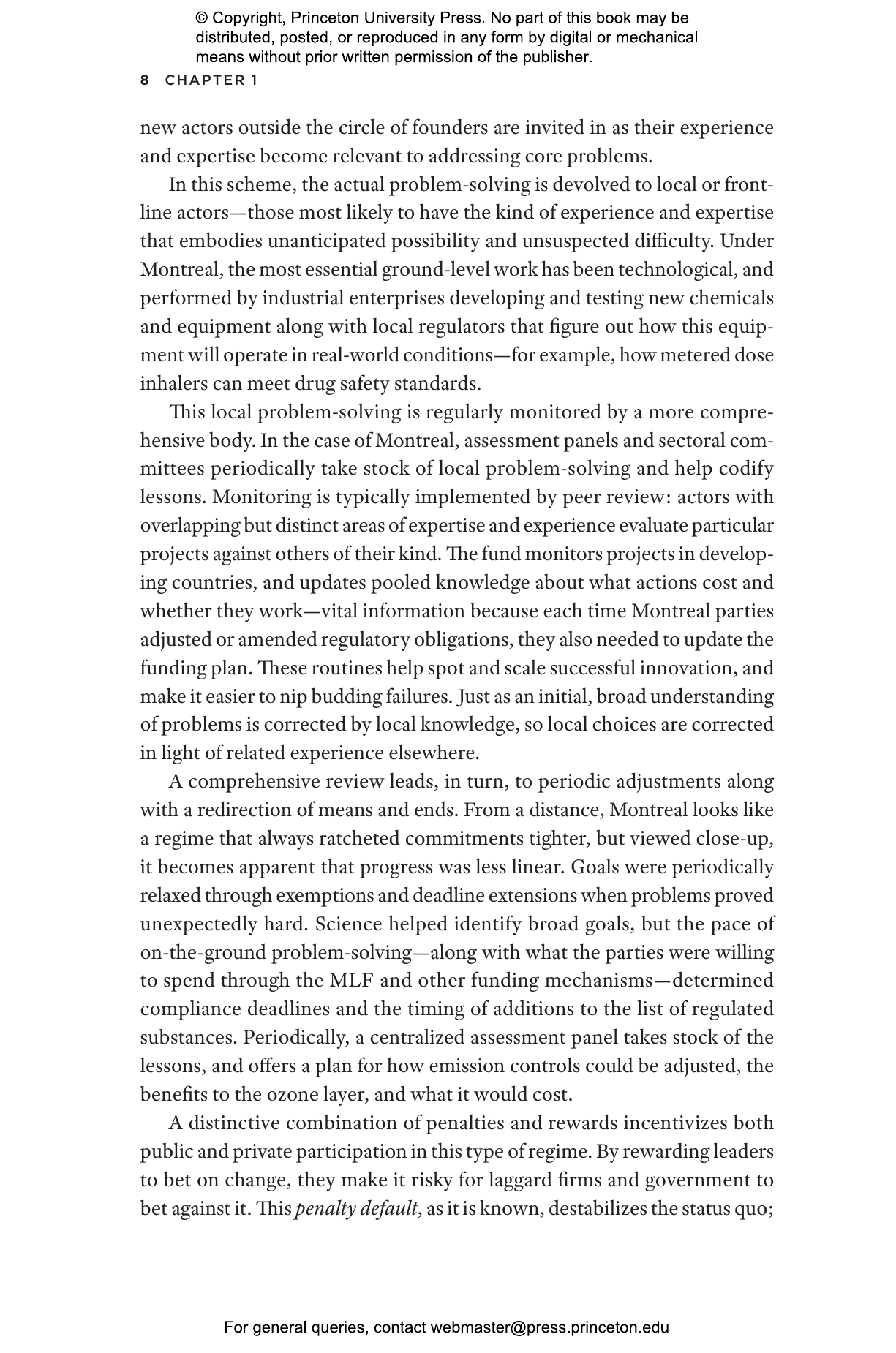 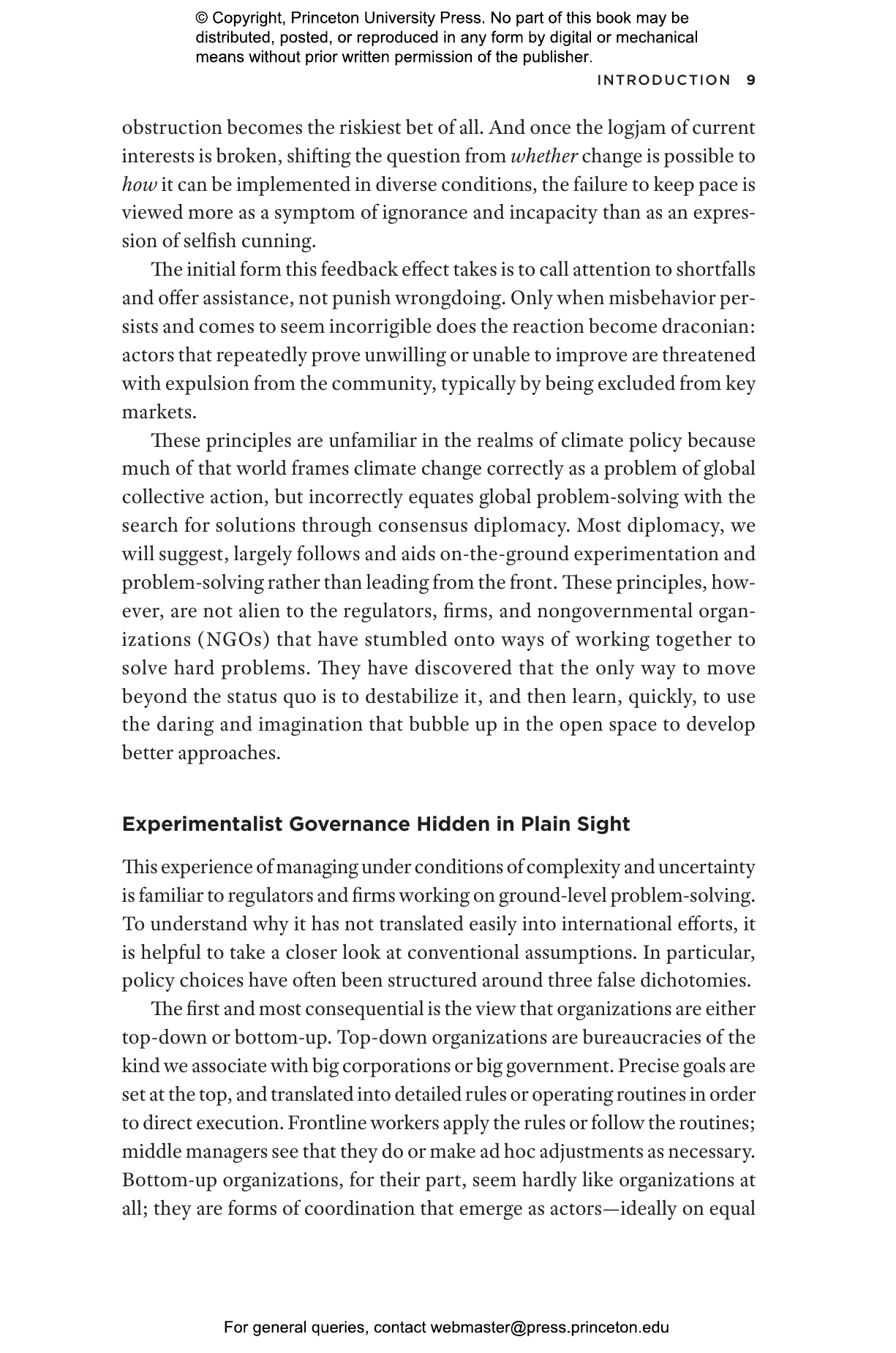 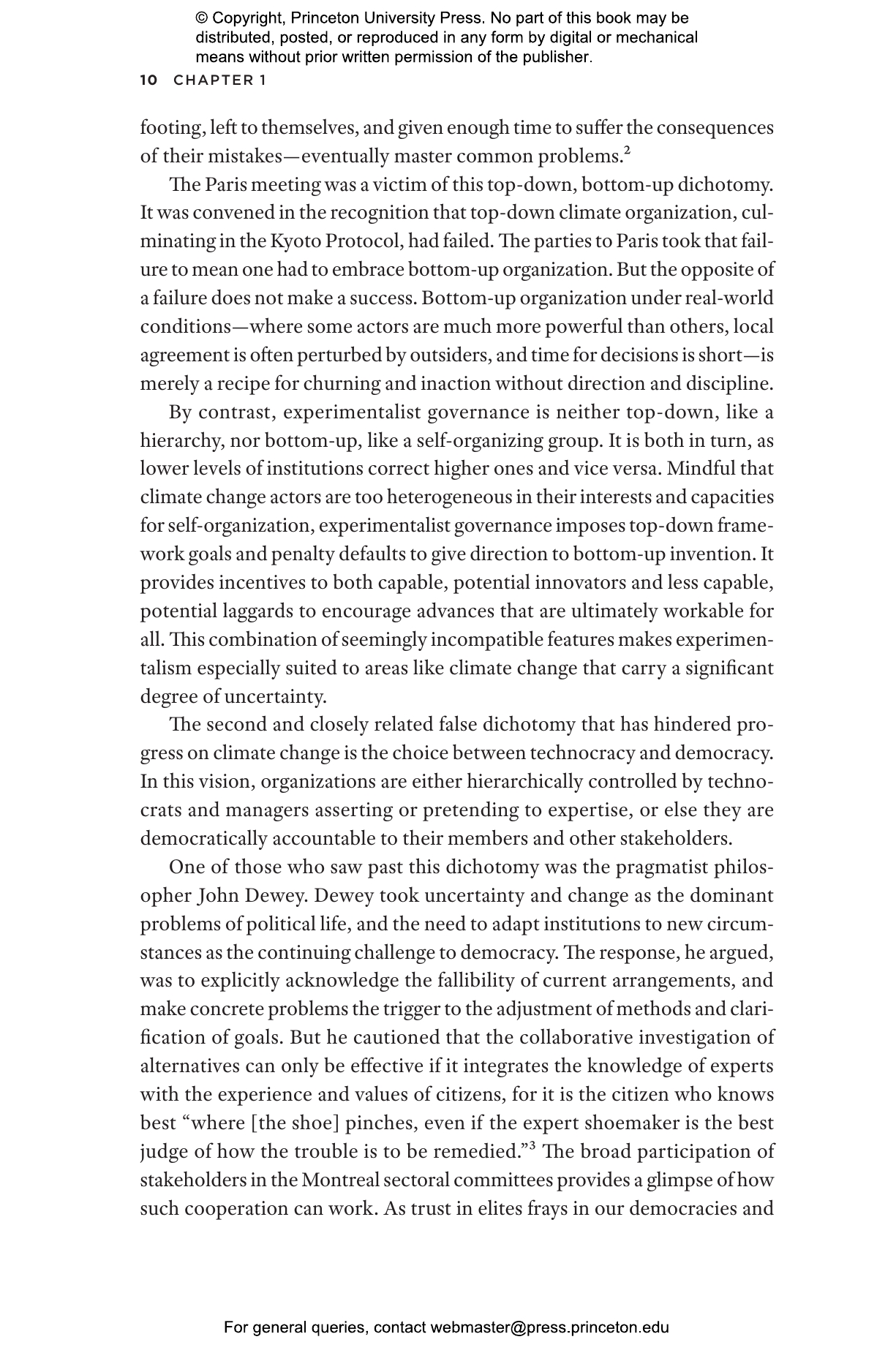 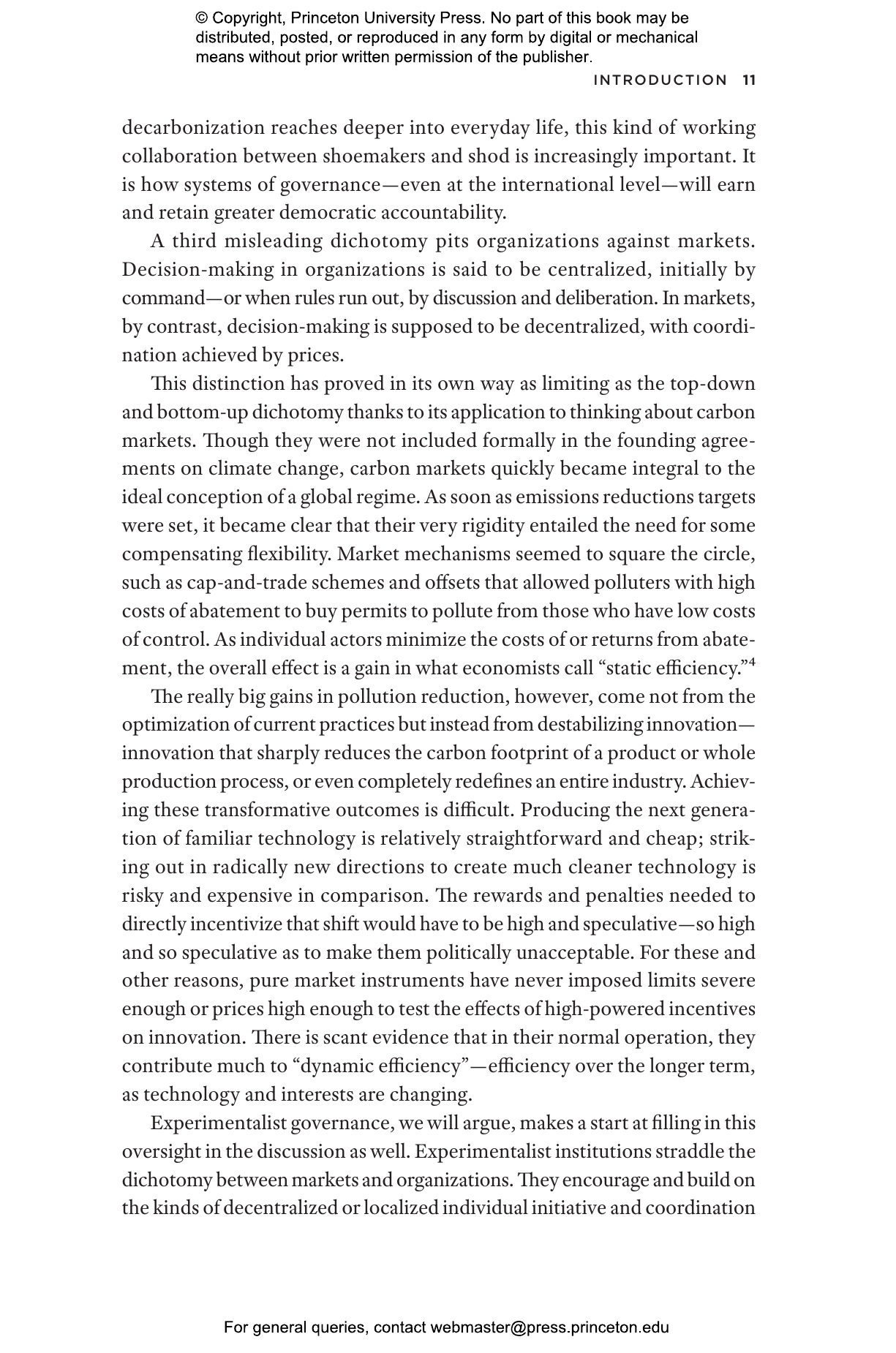 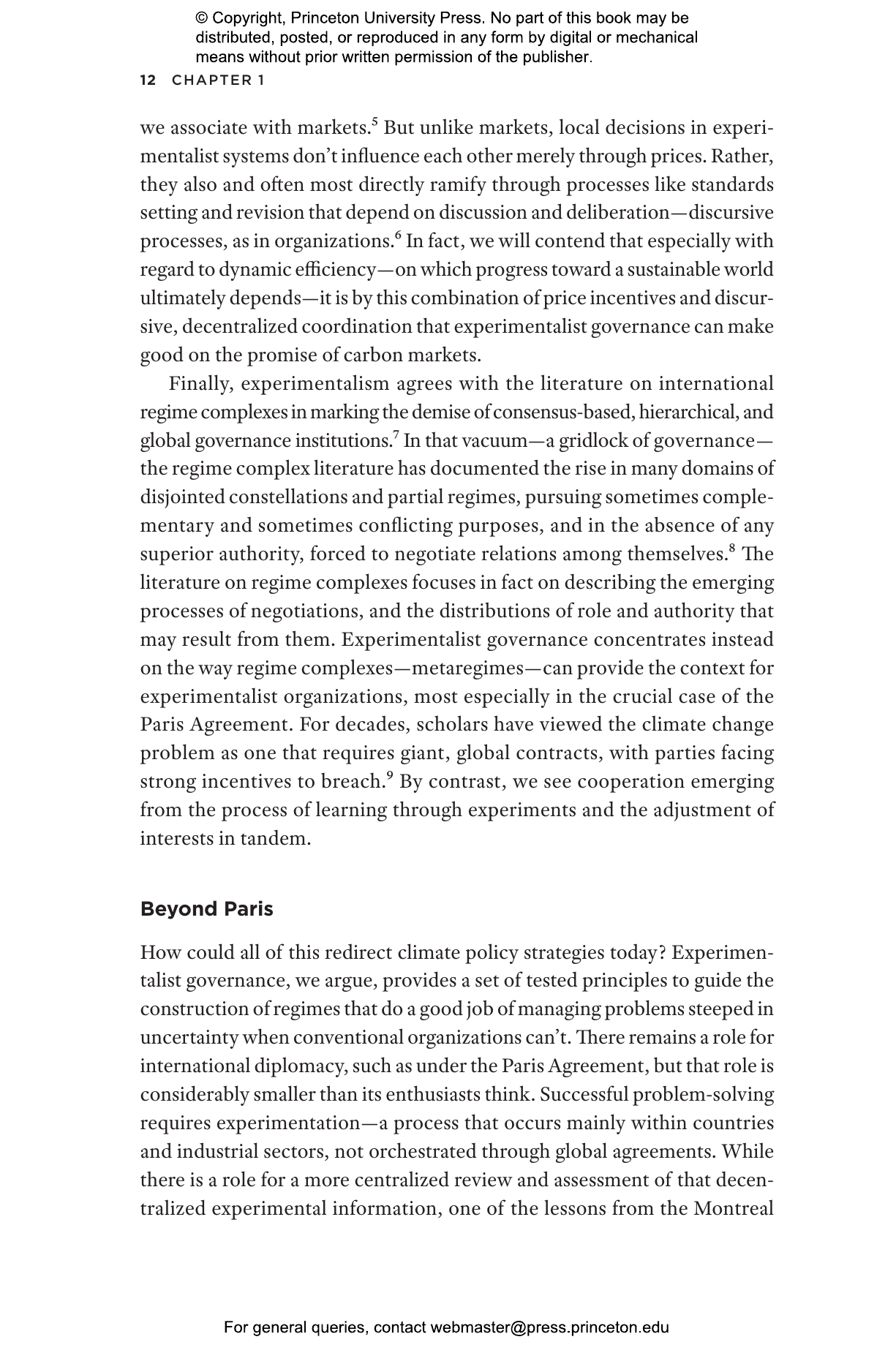 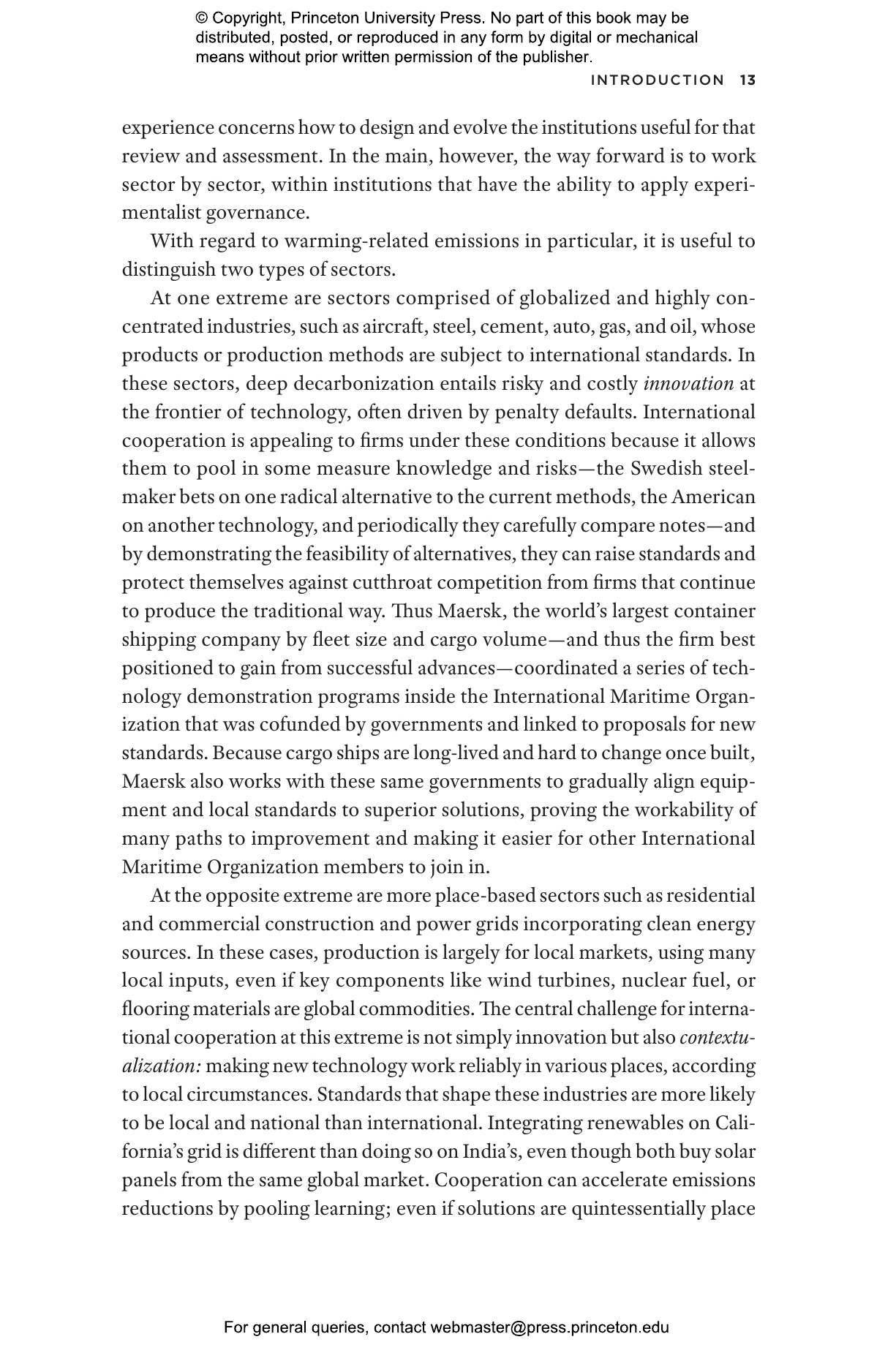 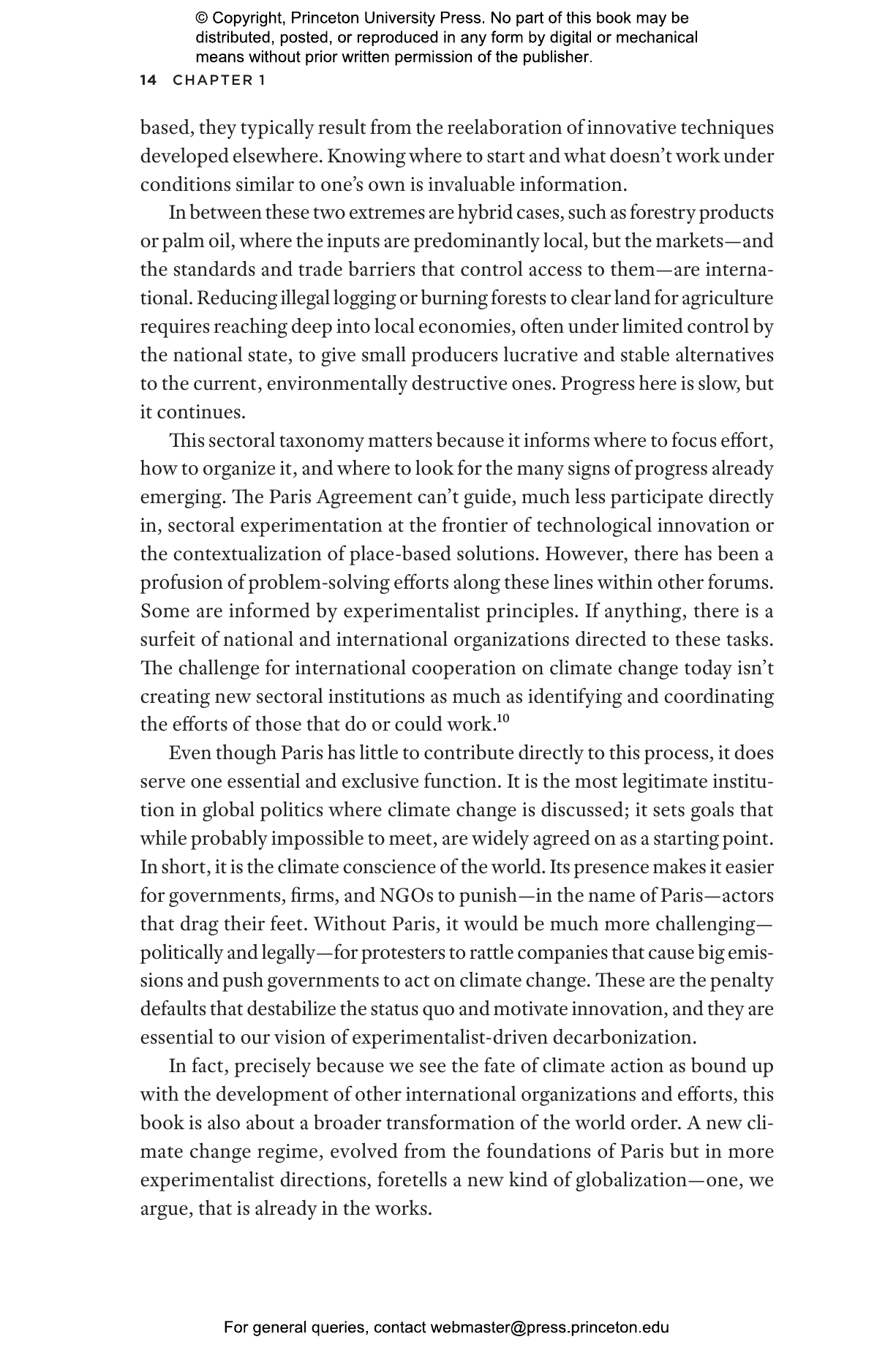 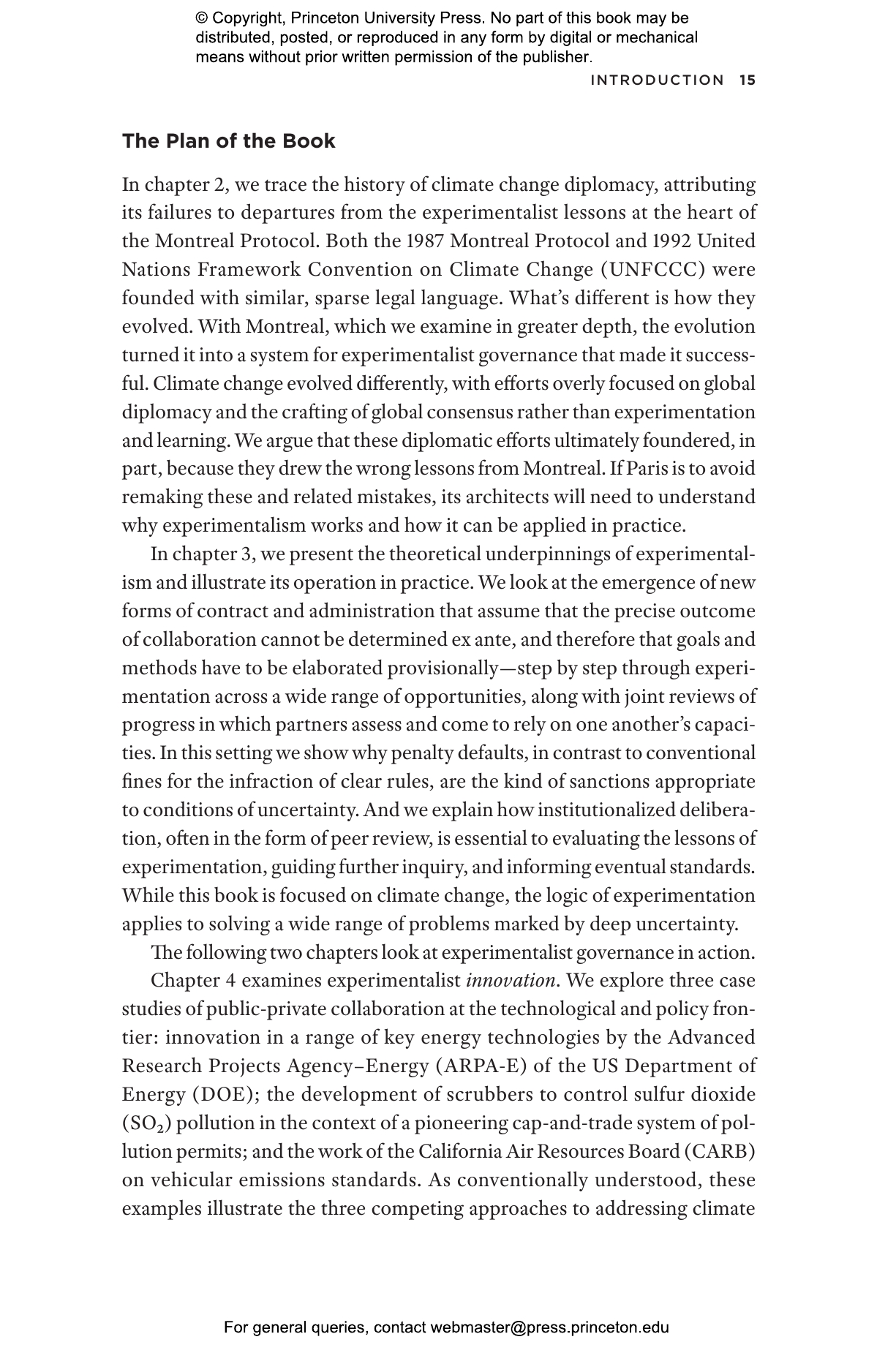 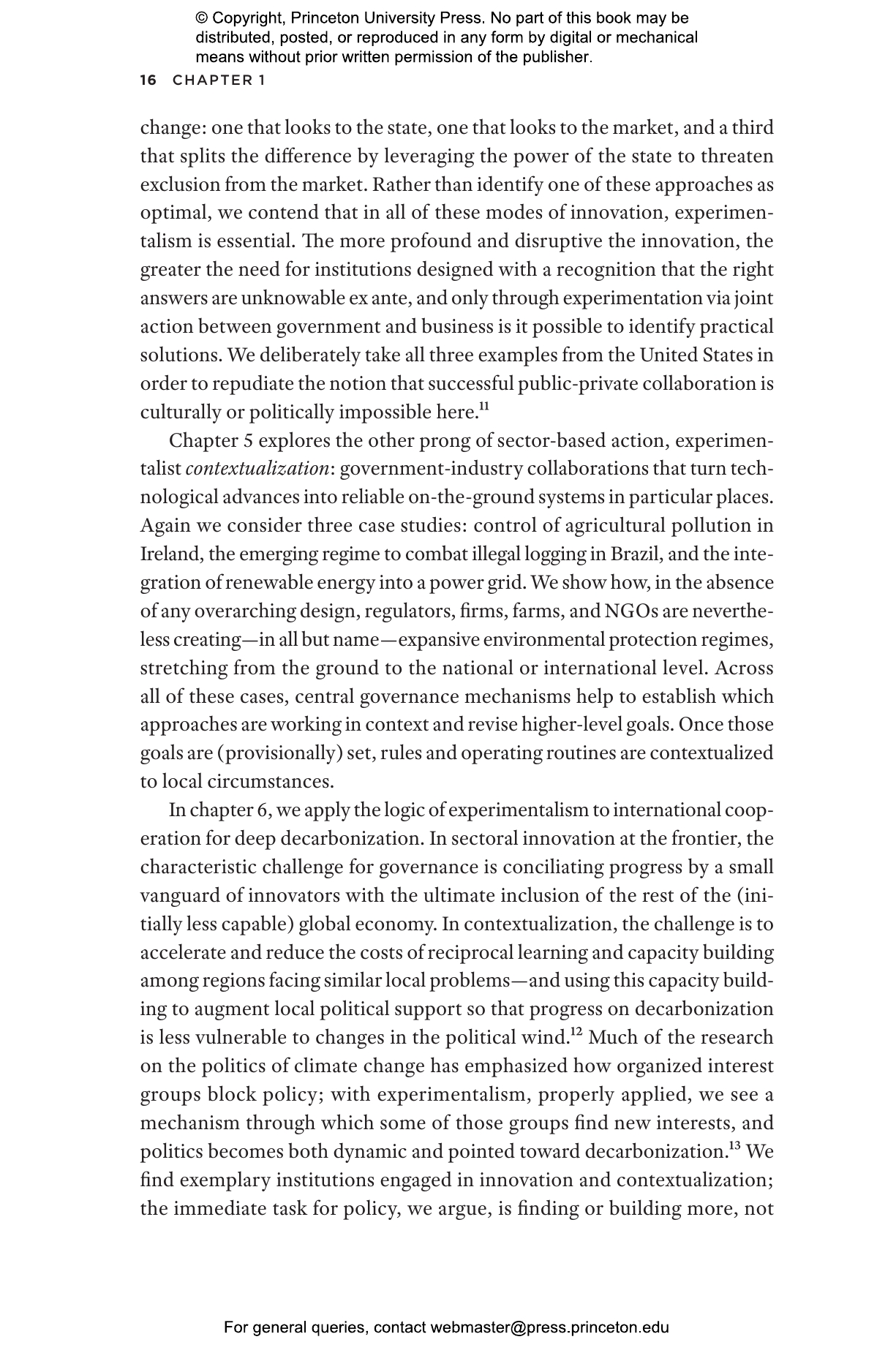 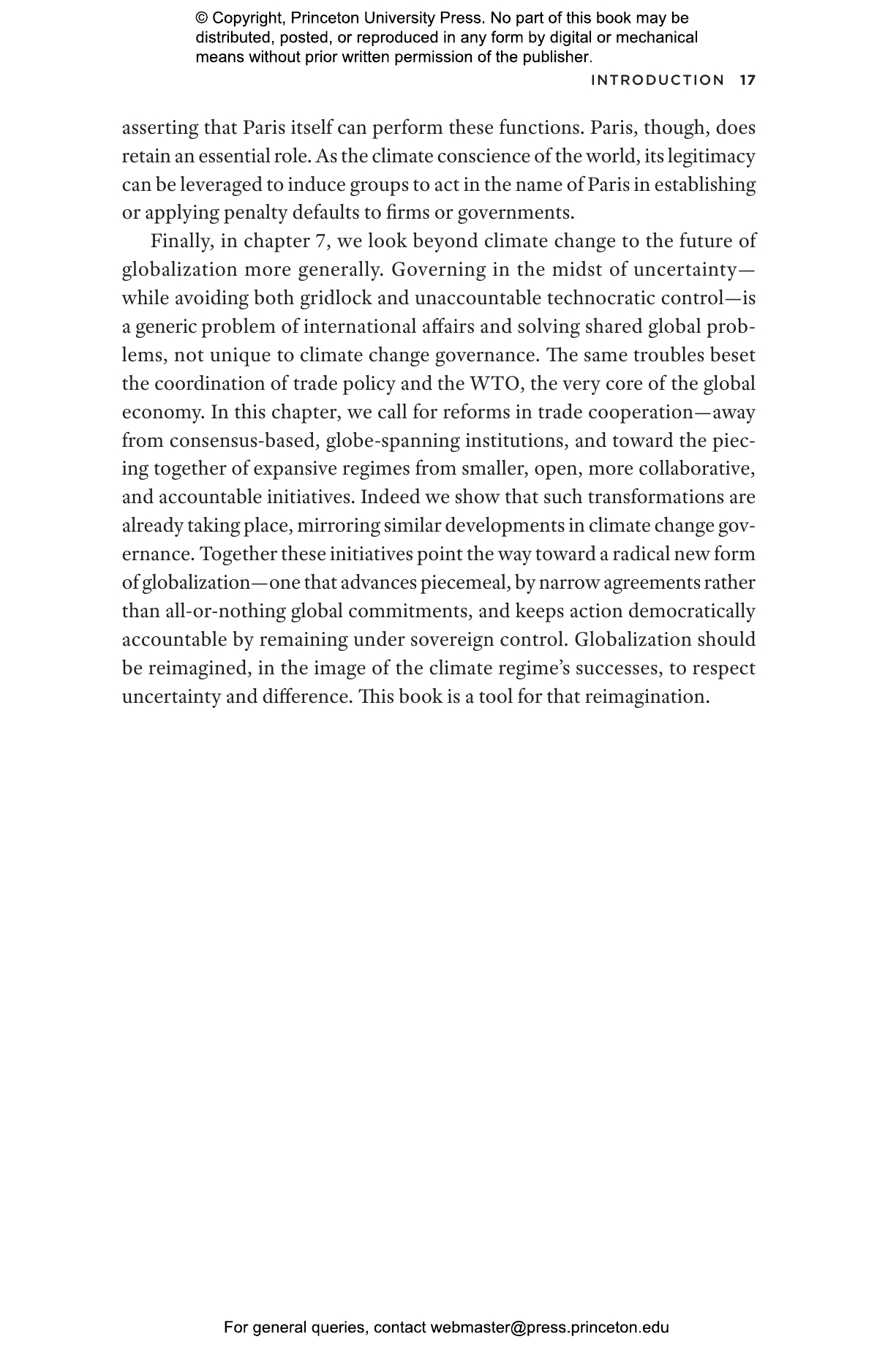 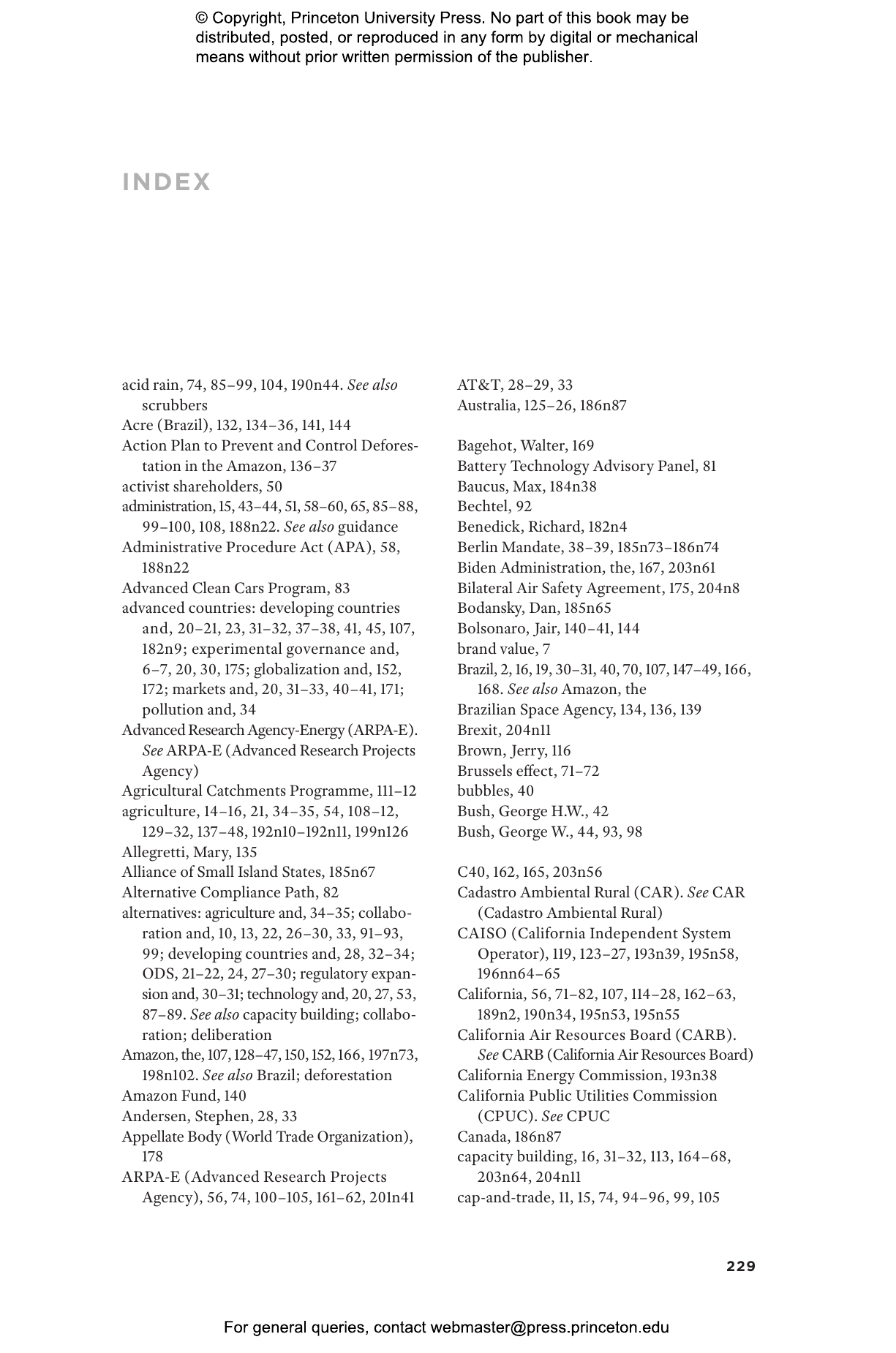 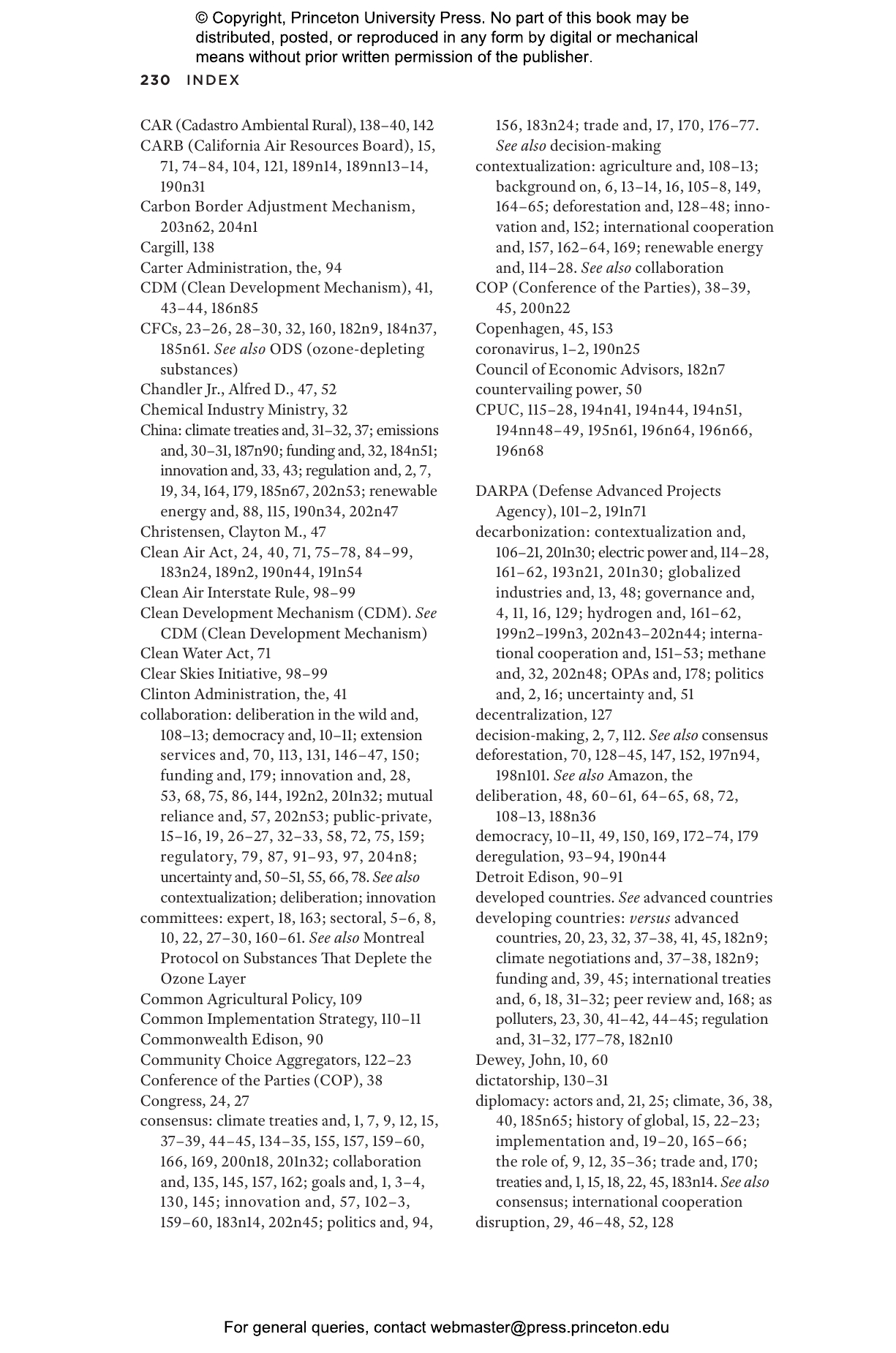 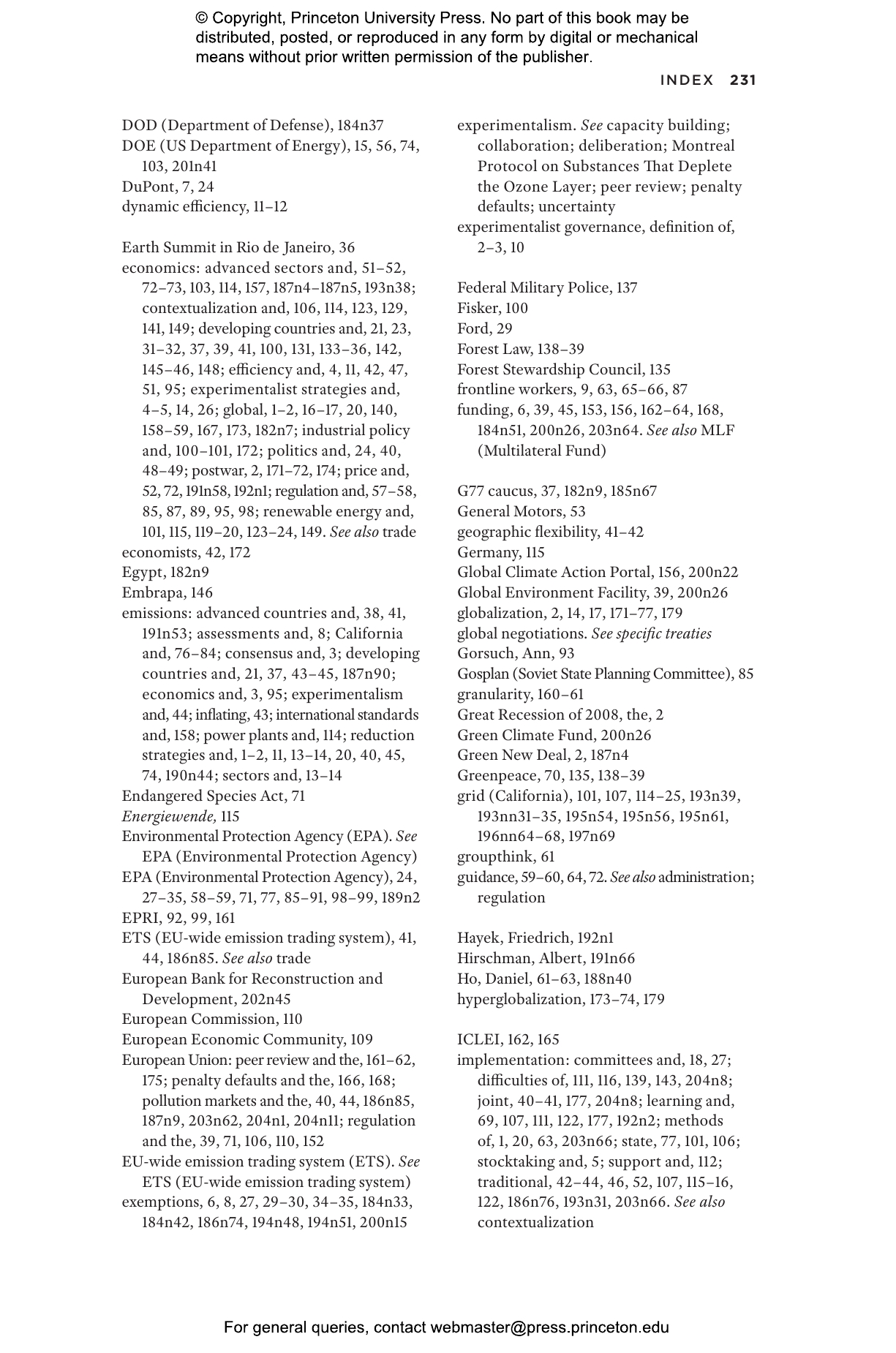 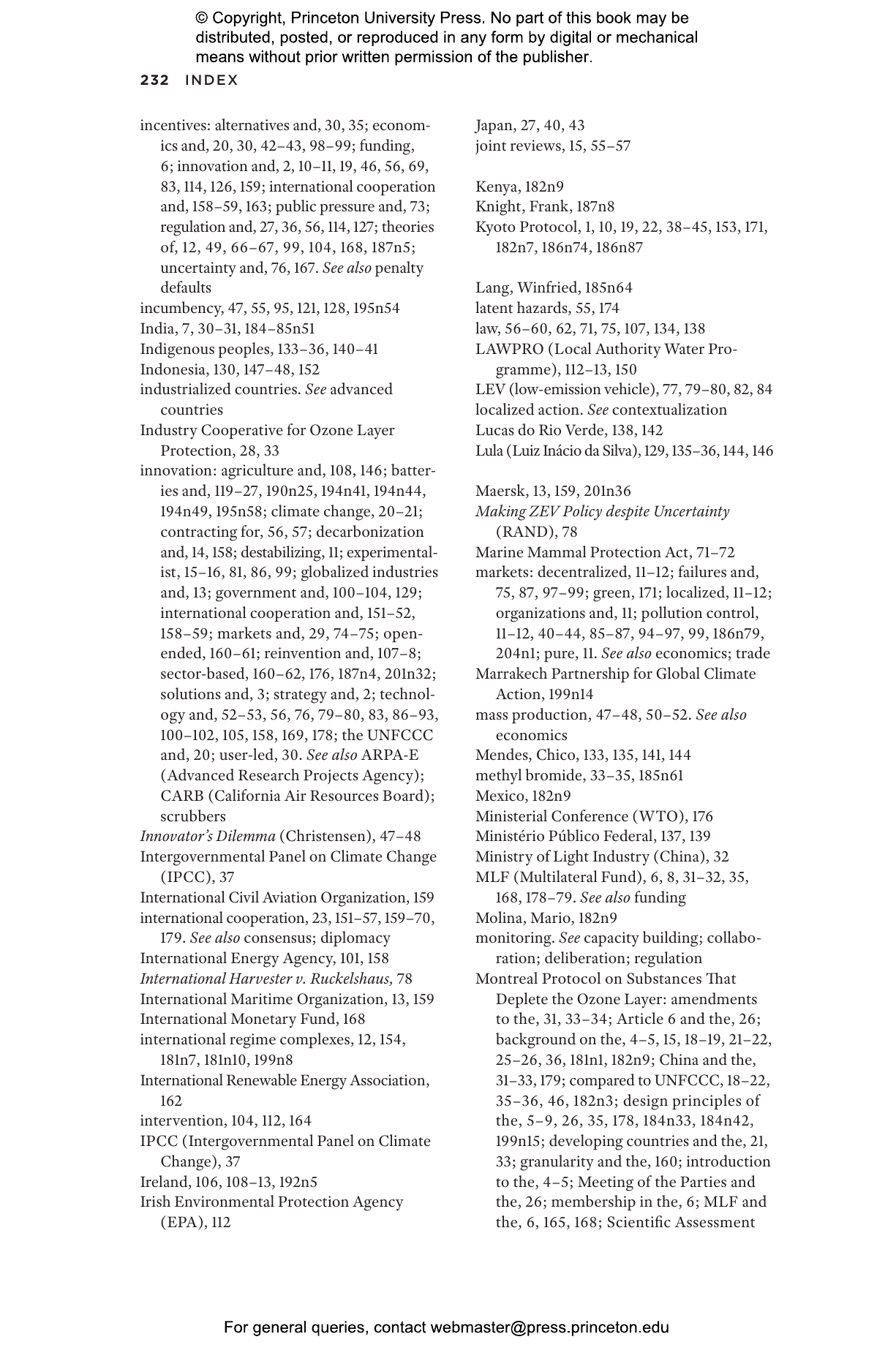 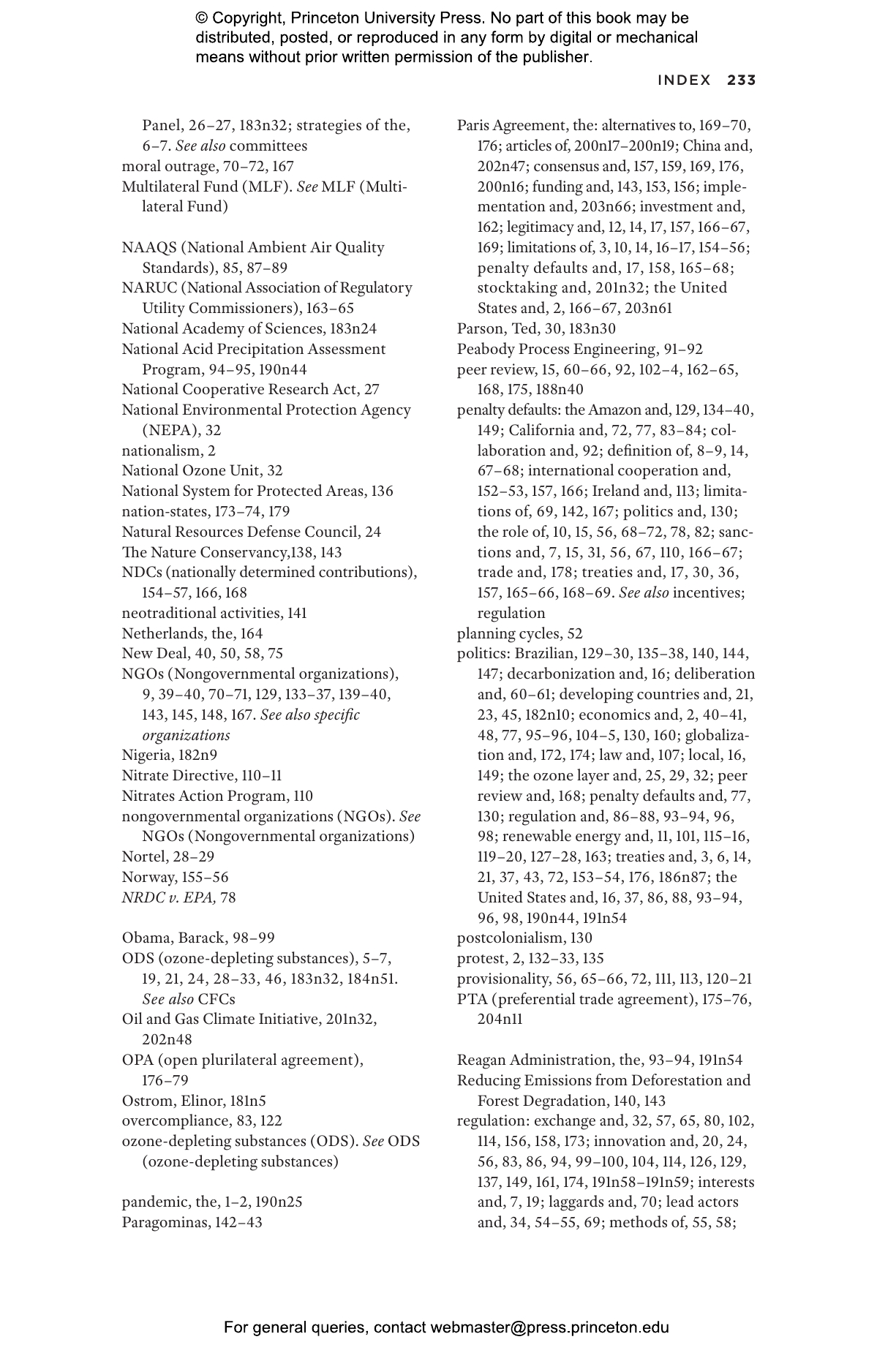 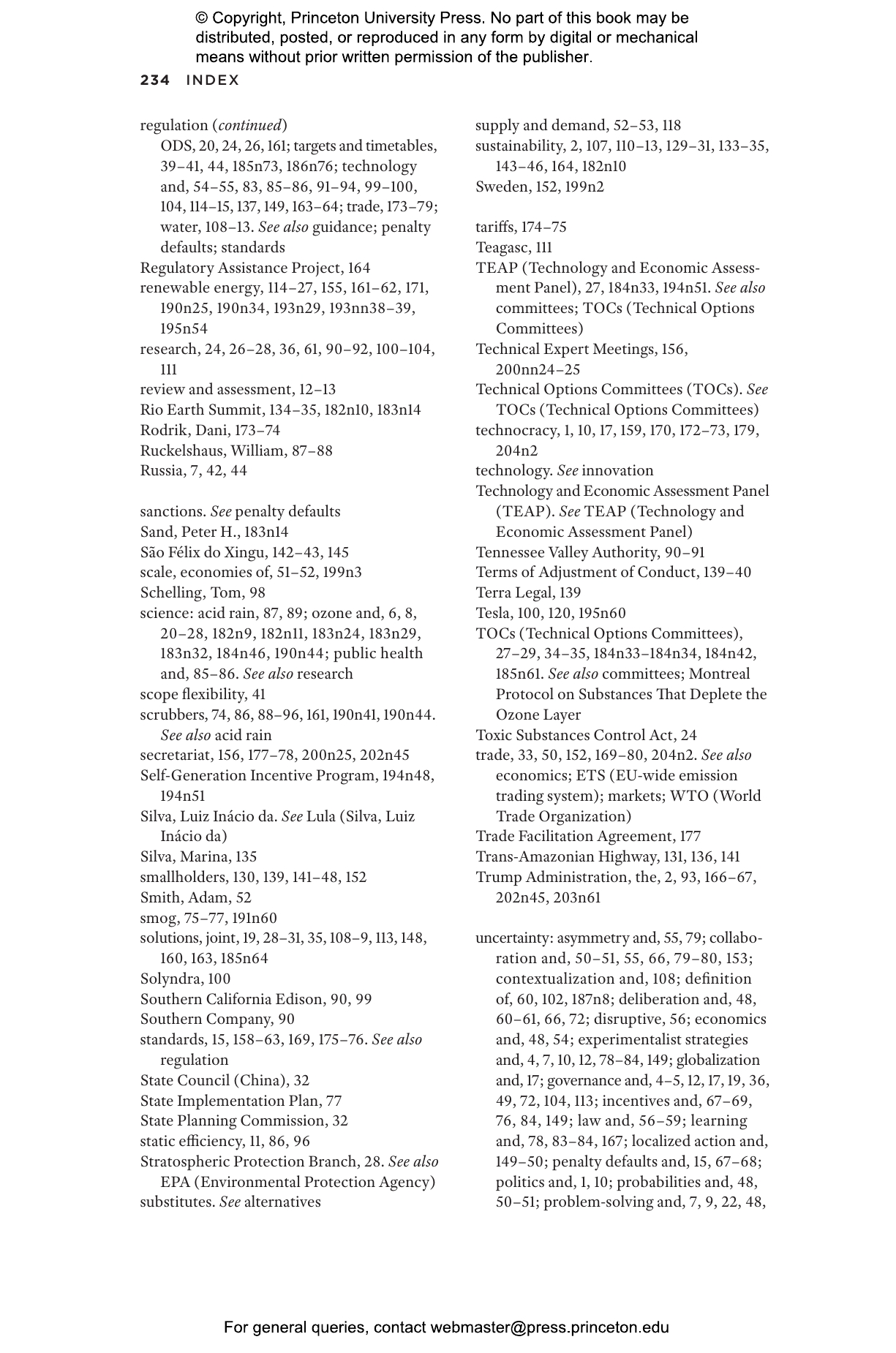 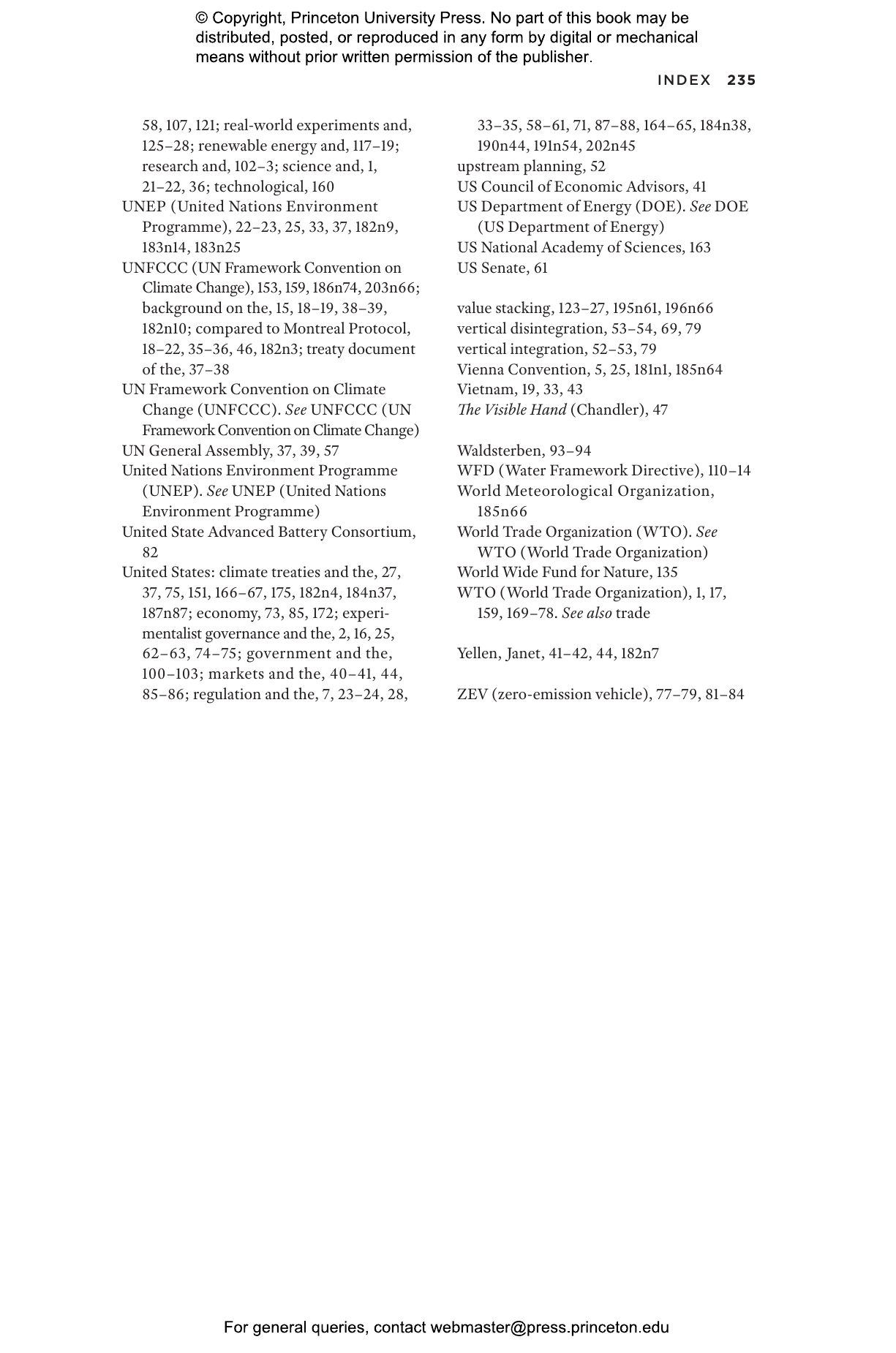 Solving the global climate crisis through local partnerships and experimentation 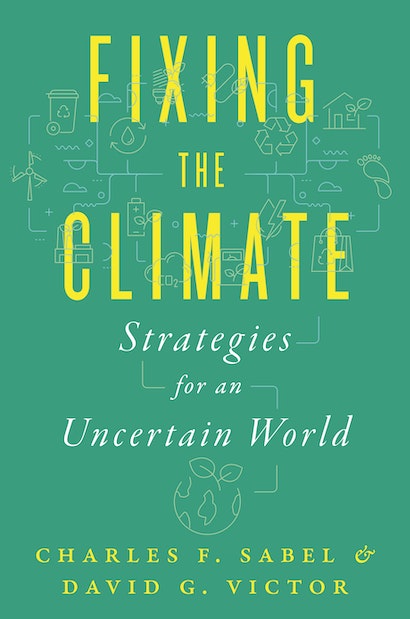 Global climate diplomacy—from the Kyoto Protocol to the Paris Agreement—is not working. Despite decades of sustained negotiations by world leaders, the climate crisis continues to worsen. The solution is within our grasp—but we will not achieve it through top-down global treaties or grand bargains among nations.

Charles Sabel and David Victor explain why the profound transformations needed for deep cuts in emissions must arise locally, with government and business working together to experiment with new technologies, quickly learn the best solutions, and spread that information globally. Sabel and Victor show how some of the most iconic successes in environmental policy were products of this experimentalist approach to problem solving, such as the Montreal Protocol on the ozone layer, the rise of electric vehicles, and Europe’s success in controlling water pollution. They argue that the Paris Agreement is at best an umbrella under which local experimentation can push the technological frontier and help societies around the world learn how to deploy the technologies and policies needed to tackle this daunting global problem.

A visionary book that fundamentally reorients our thinking about the climate crisis, Fixing the Climate is a road map to institutional design that can finally lead to self-sustaining reductions in emissions that years of global diplomacy have failed to deliver.

Charles F. Sabel is the Maurice T. Moore Professor of Law at Columbia Law School. His books include Experimentalist Governance in the European Union. He lives in New York City. David G. Victor is professor of international relations and industrial policy at the University of California, San Diego. His books include Global Warming Gridlock. He lives in La Jolla, California. 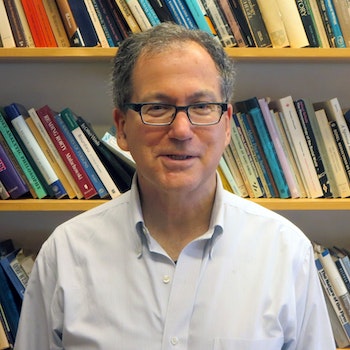 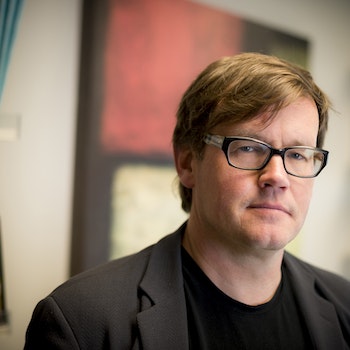 “If you read just one book this year about how we can best solve climate change, read this one. It is beautifully written, fundamentally pragmatic, and—best of all—deeply hopeful.”—Rebecca Henderson, author of Reimagining Capitalism in a World on Fire

“To get big cuts in carbon emissions, we’ve got to push the technological frontier. Charles Sabel and David Victor’s compelling new book shows persuasively how we can do this by government and business partnering together to test new technologies and learn quickly what works. This is vital reading for everyone who truly cares about climate action.”—Jay Inslee, Governor of the State of Washington, former US presidential candidate, and coauthor of Apollo’s Fire: Igniting America’s Clean Energy Economy

“In this excellent book, Sabel and Victor offer nothing less than a new paradigm for addressing climate change, building on decentralized problem-solving practices that are already widely deployed but have been hidden in plain sight due to our focus on outdated models.”—Dani Rodrik, Harvard University

“Fixing the Climate will transform the way we think about globalization and climate policy. In reenvisioning the problem of global climate action as one of collective experimentation and innovation rather than zero-sum distributional struggle, Sabel and Victor offer a perspective that combines realism, pragmatism, and optimism. An eye-opening and urgently needed book.”—Adam Tooze, author of Shutdown: How Covid Shook the World’s Economy

“We are making progress in cutting emissions. There is already overwhelming willingness by political, business, and civil-society leaders to move even faster, and this book shows how these actors must work together in the right ways to make that happen.”—Nigel Topping, UN COP26 High Level Climate Action Champion