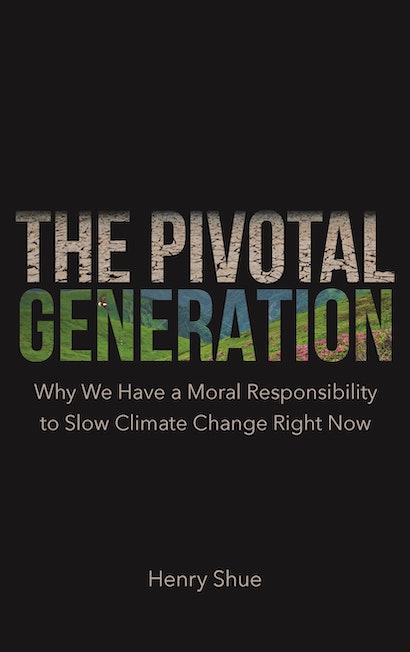 Climate change is the supreme challenge of our time. Yet despite growing international recognition of the unfolding catastrophe, global carbon emissions continue to rise, hitting an all-time high in 2019. Unless humanity rapidly transitions to renewable energy, it may be too late to stop irreversible ecological damage. In The Pivotal Generation, renowned political philosopher Henry Shue makes an impassioned case for taking immediate, radical action to combat global warming.

Shue grounds his argument in a rigorous philosophical analysis of climate change’s moral implications. Unlike previous generations, which didn’t fully understand the danger of burning carbon, we have the knowledge to comprehend and control rising carbon dioxide levels. And unlike future generations, we still have time to mitigate the worst effects of global warming. This generation has the power, and thus the responsibility, to save the planet. Shirking that responsibility only leaves the next generation with an even heavier burden—one they may find impossible to bear.

Written in direct, accessible language, The Pivotal Generation approaches the latest scientific research with a singular moral clarity. It’s an urgently needed call to action for anyone concerned about the planet’s future.

Henry Shue is Senior Research Fellow at the Centre for International Studies at the University of Oxford, where he is also Senior Research Fellow Emeritus at Merton College. His books include Basic Rights (Princeton), Climate Justice, and Fighting Hurt. In 1976, he cofounded the Institute for Philosophy and Public Policy at the University of Maryland, and in recent years he was a supporter of the successful campaign by Virginia’s Augusta County Alliance to stop the Atlantic Coast Pipeline.