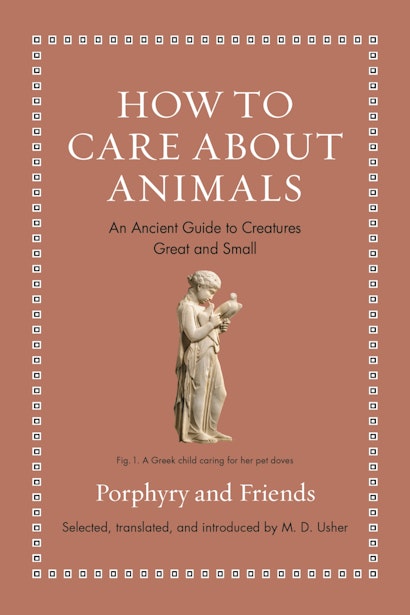 How to Care about Animals is a fascinating menagerie of passages from classical literature about animals and the lives we share with them. Drawing on ancient writers from Aesop to Ovid, classicist and farmer M. D. Usher has gathered a healthy litter of selections that reveal some of the ways Greeks and Romans thought about everything from lions, bears, and wolves to birds, octopuses, and snails—and that might inspire us to rethink our own relationships with our fellow creatures. Presented in lively new translations, with the original texts on facing pages, these pieces are filled with surprises—anticipating but also offering new perspectives on many of our current feelings and ideas about animals.

Here, Porphyry makes a compelling argument for vegetarianism and asserts that the just treatment of animals makes us better people; Pliny the Elder praises the virtuosity of songbirds and the virtuousness of elephants; Plutarch has one of Circe’s pigs from the Odyssey make a serio-comic case for the dignity of the beasts of the field; Aristotle puts the study of animals on par with anthropology; we read timeless Aesopian fables, including “The Hen That Laid the Golden Egg” and “The Fox and the Grapes”; and there is much, much more.

A Noah’s Ark of a book, How to Care about Animals is guaranteed to charm and inspire anyone who loves animals.

M. D. Usher is the Lyman-Roberts Professor of Classical Languages and Literature and a member of the Department of Geography and Geosciences at the University of Vermont. With his wife, he also built, owns, and operates Works & Days Farm, which produces lamb, eggs, and maple syrup in Shoreham, Vermont. His books include How to Be a Farmer: An Ancient Guide to Life on the Land and How to Say No: An Ancient Guide to the Art of Cynicism (both Princeton).