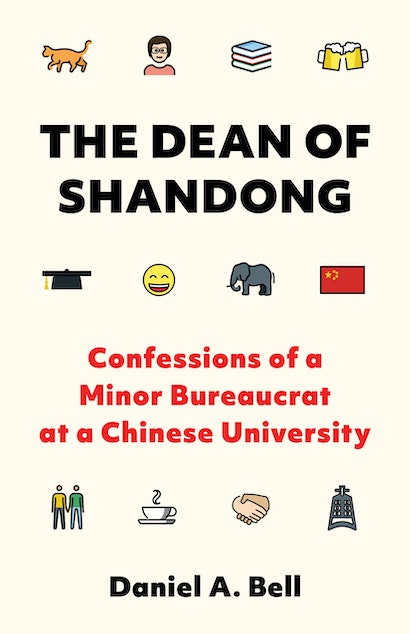 On January 1, 2017, Daniel Bell was appointed dean of the School of Political Science and Public Administration at Shandong University—the first foreign dean of a political science faculty in mainland China’s history. In The Dean of Shandong, Bell chronicles his experiences as what he calls “a minor bureaucrat,” offering an inside account of the workings of Chinese academia and what they reveal about China’s political system. It wasn’t all smooth sailing—Bell wryly recounts sporadic bungles and misunderstandings—but Bell’s post as dean provides a unique vantage point on China today.

Bell, neither a Chinese citizen nor a member of the Chinese Communist Party, was appointed as dean because of his scholarly work on Confucianism—but soon found himself coping with a variety of issues having little to do with scholarship or Confucius. These include the importance of hair color and the prevalence of hair-dying among university administrators, both male and female; Shandong’s drinking culture, with endless toasts at every shared meal; and some unintended consequences of an intensely competitive academic meritocracy. As dean, he also confronts weightier matters: the role at the university of the Party secretary, the national anticorruption campaign and its effect on academia (Bell asks provocatively, “What’s wrong with corruption?”), and formal and informal modes of censorship. Considering both the revival of Confucianism in China over the last three decades and what he calls “the Communist comeback” since 2008, Bell predicts that China’s political future is likely to be determined by both Confucianism and Communism.

Daniel A. Bell is Chair Professor of Political Theory with the Faculty of Law at the University of Hong Kong. He served as Dean at Shandong University's School of Political Science and Public Administration from 2017 to 2022. He is the author of The China Model, Just Hierarchy (with Wang Pei), Beyond Liberal Democracy, China's New Confucianism (all Princeton), and other books.

“In The Dean of Shandong, Daniel Bell takes us where few Westerners have gone—into the faculty lounge, teaching rooms, and party meetings of a Chinese university in the era of Xi Jinping. Think Lucky Jim meets Brave New World: Bell’s account of life as a senior Western academic in a Chinese university is by turns humane, disturbing, hilarious—and always eye-opening.”—Rana Mitter, author of Forgotten Ally: China’s World War II, 1937–1945

“Daniel Bell is wry, informed, open-minded, and enlightening in his look at Chinese bureaucracy from his years on the inside. Everyone interested in China will find new insights in this terse, funny book.”—James Fallows, author of China Airborne

“A leading interpreter of the Confucian tradition, Daniel Bell takes us into the citadel of contemporary Chinese higher education. Honest and wise, entertaining and witty, he tells the story of an illustrious scholarly life that began in French Canada and Oxford and led to the deanship at Shandong University, one of the most prestigious in China. The personal narrative sparkles, but Bell also analyzes with great clarity and insight the many challenges as well as promises facing China and Chinese intellectuals in the unfolding twenty-first century.”—Anna Sun, author of Confucianism as a World Religion: Contested Histories and Contemporary Realities

“If you think a book about a ‘minor educational bureaucrat’ in provincial China must be dull, think again. This is a sparkling, compulsively readable book about how an Oxford-educated Canadian political scientist became the leading theorist of political Confucianism in China. Bell’s story is charming and filled with self-deprecating humor, but it is also remarkably courageous, given the current climate. It will leave you with a sense that you understand the Chinese and the Chinese system much better than you did before.”—James Hankins, author of Virtue Politics: Soulcraft and Statecraft in Renaissance Italy

“Bell offers a fascinating glimpse into the workings of a Chinese university as both an insider (a dean) and an outsider (a Canadian). Along the way he treats, with a light hand, the cultural and philosophical underpinnings of contemporary China. This is a book anyone interested in that country will enjoy.”—Shadi Bartsch, author of Plato Goes to China: The Greek Classics and Chinese Nationalism

“Daniel Bell has rightly earned a reputation as the dean—both literally and figuratively—of Confucian studies. But even more important is his cosmopolitan and communitarian spirit, a compelling worldview that makes him a true bridge between East and West. The wisdom of this book—as with all of Bell’s writing—is both novel and universal.”—Parag Khanna, author of The Future is Asian