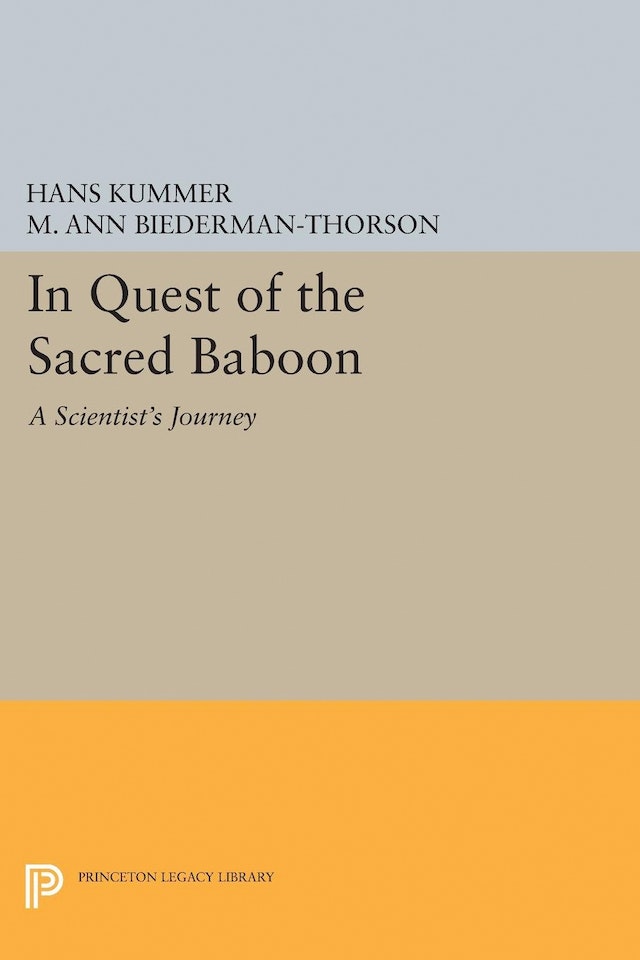 In a tale that begins at a zoo in Zurich and takes us across the deserts of Ethiopia to the Asir Mountains in Saudi Arabia, Hans Kummer recreates the adventure and intellectual thrill of the early days of field research on primates. Just as Jane Goodall and Dian Fossey introduced readers to the fascinating lives of chimpanzees and gorillas, Kummer brings us face to face with the Hamadryas baboon. With their furry white mantles and gleaming red hindquarters, the Hamadryas appear frequently in the art of the ancient Egyptians — who may have interpreted the baboons’ early morning grooming rituals as sun-worshiping rites. Back then, Hamadryas were thought to be incarnates of Thoth, the god of wisdom; today they are considered to have one of the most highly structured social systems among primates, very close, in some respects, to that of humans. In the 1960s, Kummer, after conflicts with nomadic warriors, managed to track down these elusive baboons near the Danakil Desert, and then followed them from dawn to dusk on their treks from one feeding place to another. His scientific account of this period reads like a travel memoir as he describes his encounters with the Hamadryas and the people with whom they share the desert. Winding his way through cliffs and stubble, Kummer records the baboons’ social life, from the development of pair relationships to the way an entire group decides where to march each day. Much like the human nomads who cope with the harsh demands of the desert environment, the Hamadryas maintain a society that is strict and patriarchal in its details but multilayered and flexible in its largest units. We learn, for example, of the Hamadryas’ respect for possession that protects family structure and of the cohesion among family leaders that lessens the threat of battle. At the same time, clear-cut personalities emerge from Kummer’s account, drawing us into the life stories and power struggles of individual baboons. Whereas this rich detail holds many implications for natural scientists, the colorful way it comes to life makes for a compelling book bound to entertain and educate all readers.

"This is a book for everyone. The author describes vividly the burning sands and rugged cliffs of Ethiopia, and the fierce wild people who make their home in the unrelenting desert. There is danger and excitement. And there are the hardy and utterly fascinating baboons, with their red faces and silver mantles, the sacred Hamadryas of ancient Egypt. Kummer's scientific talent for observation, his love for his subjects and his magnificent prose make this a powerful and unforgettable book. For the sake of the Hamadryas baboons, please buy it!"—Jane Goodall

"From the arresting first page of the preface, which takes the reader straight into the bush, to the moving final paragraph that will resonate with long-term field workers, it is compelling. . . . The thoughtful, personal disclosures are uncommonly telling and deserve wide attention."—W. C. McGrew, Nature

"A book that encompasses the full body of a remarkable research project. [This] is an extremely satisfying book to read and will appeal to all. It is scientifically valuable, emotionally powerful, and spiritually rejuvenating."—Conrad Brain, New Scientist

"Kummer's scientific talent for observation, his love for his subjects, and his magnificent prose make this a powerful and unforgettable book."—Jane Goodall