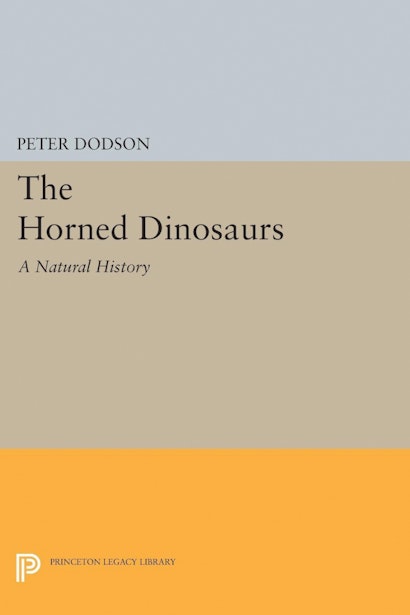 The horned dinosaurs, a group of rhinoceros-like creatures that lived 100 to 65 million years ago, included one of the greatest and most popular dinosaurs studied today: Triceratops. Noted for his flamboyant appearance — marked by a striking array of horns over the nose and eyes, a long bony frill at the back of the head, and an assortment of lumps and bumps for attracting females — this herbivore displayed remarkable strength in its ability to fight off Tyrannosaurus rex. It was also among the last dinosaurs to walk the earth. In telling us about Triceratops and its relatives, the Ceratopsia, Peter Dodson here re-creates the sense of adventure enjoyed by so many scientists who have studied them since their discovery in the mid-nineteenth century. From the badlands of the Red Deer River in Alberta to the Gobi Desert, Dodson pieces together fossil evidence to describe the ceratopsians themselves — their anatomy, biology, and geography — and he evokes the human dimension of their discovery and interpretation. An authoritative survey filled with many original illustrations, this book is the first comprehensive presentation of horned dinosaurs for the general reader. Dodson explains first the fascinating ways in which the ceratopsians dealt with their dangerous environment. There follows a lesson on ceratopsian bone structure, which enables the reader quickly to grasp the questions that still puzzle scientists, concerning features such as posture, gait, footprints, and diet. Dodson evenhandedly discusses controversies that continue, for example, over sexual dimorphism and the causes of the dinosaurs’ disappearance. Throughout his narrative, we are reminded that dinosaur study is a human enterprise. We meet the scientists who charmed New York high society into financing expeditions to Mongolia, home of Triceratops’ predecessors, as well as those who used their poker winnings to sustain paleontology expeditions. Rich in fossil lore and in tales of adventure, the world of the Ceratopsia is presented here for specialists and general readers alike.

"Mr. Dodson's enthusiasm—his passion and love—for his subject is catching. . . . he writes with humor and grace . . . . It's as readable as a good letter from a friend you want to hear from. . . . and what a magnificent story he tells."—Stephen Goode, The Washington Times

"[Dodson] brings considerable wit and charm to his argument and gives an excellent sense of the practice of paleontology, as well as of the personalities involved in it."—Kirkus Reviews

"A fascinating and comprehensive scholarly and personal survey . . . The author has successfully re-created the horned dinosaur in a fascinating book of facts, theories, and speculation. With extensive notes and excellent illustrations, this impressive volume is highly recommended."—Library Journal

"[Dodson] manages to explain many of the intricacies of dinosaur studies in jargon-free language, and where jargon is necessary the terms are clearly defined. Above all he helps to make the dinosaurs come alive—something that most paleontologists can only dream about."—Paul M. Barrett, The Times Higher Education Supplement

"It is perhaps surprising that no general work has ever been published about [the Ceratopsia], but the deficit is now redressed by Dodson's engaging, witty, and erudite new book. It is a labor of love by an admitted Oceratophile' (his term), an anatomist particularly skilled in biometrics.... The prose is graceful and never overly serious, and the footnoted asides are informative and amusing, so that even chapters on topics as dry as the necessary skeletal anatomy and principles of classification will be palatable to the non-specialist."—Kevin Padian, Science

"In his new book, Peter Dodson, a long-time student of ceratopsians, presents a delightful and authoritative survey of the horned dinosaurs.... Dodson writes in an informal, often cheerfully and unabashedly personal manner. This narrative structure nicely conveys the sense of excitement associated with the discovery of and research on dinosaurs and makes the more technical matters accessible to the interested lay reader."—Hans Sues, American Paleontologist

"Through humor and careful observation, Dodson relishes the opportunity to expose the reader to much of what he has experienced as a paleontologist and professor."—Mark Goodwin, Museum of Paleontology, University of California, Berkeley