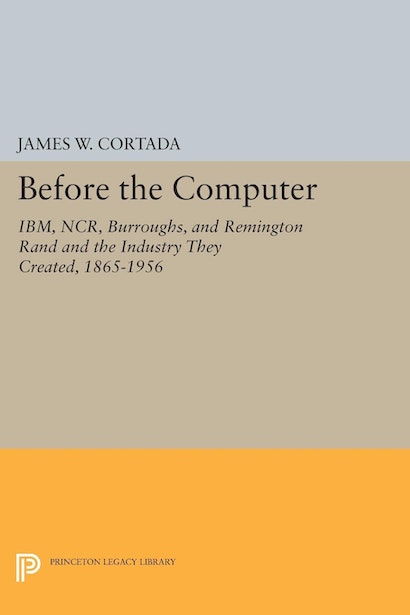 Before the Computer fully explores the data processing industry in the United States from its nineteenth-century inception down to the period when the computer became its primary tool. As James Cortada describes what was once called the “office appliance industry,” he challenges our view of the digital computer as a revolutionary technology. Cortada interprets reliance on computers as a development within an important segment of the American economy that was earlier represented largely by such instruments as typewriters, tabulating machines, adding machines, and calculators. He also describes how many of the practices of the office appliance industry evolved into those of the computer world. Drawing on previously unavailable industry archives, the author adds to our understanding of IBM’s early history and offers short corporate histories of firms that include NCR, Burroughs, and Remington Rand. Focusing on the United States but also including comparative material on Europe and Asia, Before the Computer will be a unique source of knowledge about the companies that built office equipment and their enormous impact on economic life.

"The computer didn't spring full-blown from the brows of men like Steve Jobs and Bill Gates. The automation movement that prepared the way for today's personal computer, the author shows, began in the 19th century with the invention of the typewriter and the adding machine."—Washington Post Book World

"Easily the best attempt to date to integrate the present-day computer industry with its office machine past. It is strongly recommended as a significant contribution to the literature of the history of computing and the information handling industries."—Martin Campbell-Kelly, Business History

"This beautifully produced book ... makes an essential contribution to the history of data processing and computing. Its data alone should make the book a basic reference for scholars."—Steven W. Usselman, American Scientist