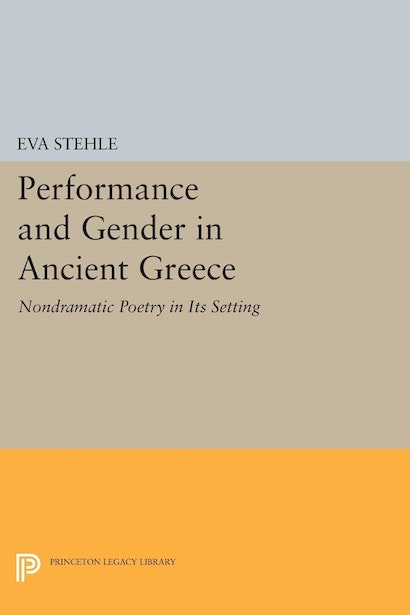 “Like love, Greek poetry was not for hereafter,” writes Eva Stehle, “but shared in the present mirth and laughter of festival, ceremony, and party.” Describing how men and women, young and adult, sang or recited in public settings, Stehle treats poetry as an occasion for the performer’s self-presentation. She discusses a wide range of pre-Hellenistic poetry, including Sappho’s, compares how men and women speak about themselves, and constructs an innovative approach to performance that illuminates gender ideology. After considering the audience and the function of different modes of performance — community, bardic, and closed groups — Stehle explores this poetry as gendered speech, which interacts with performers’ bodily presence to create social identities for the speakers. Texts for female choral performers reveal how women in public spoke in order to disavow the power of their speech and their sexual power. Male performers, however, could manipulate gender as an ideological system: they sometimes claimed female identity in addition to male, associated themselves with triumph over a defeated (mythical) female figure, or asserted their disconnection from women, thereby creating idealized social identities for themselves. A final chapter concentrates on the written poetry of Sappho, which borrows the communicative strategy of writing in order to create a fictional speaker distinct from the singer, a “Sappho” whom others could re-create in imagination.

"Stehle has set about the important and arduous task of situating existing texts and text fragments of ancient Green nondramatic poetry in their performative contexts . . . This is a thorough analysis . . . clearly written and compelling, a valuable resource for classics, gender, and performance studies scholars and students."—Classical World

"Brilliant.... This is one of the most important books on Greek lyric for many years, and it will make a lasting contribution."—Ian Rutherford