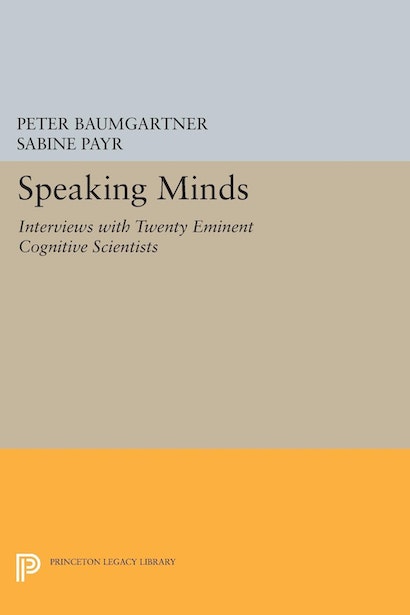 Few developments in the intellectual life of the past quarter-century have provoked more controversy than the attempt to engineer human-like intelligence by artificial means. Born of computer science, this effort has sparked a continuing debate among the psychologists, neuroscientists, philosophers,and linguists who have pioneered — and criticized — artificial intelligence. Are there general principles, as some computer scientists had originally hoped, that would fully describe the activity of both animal and machine minds, just as aerodynamics accounts for the flight of birds and airplanes? In the twenty substantial interviews published here, leading researchers address this and other vexing questions in the field of cognitive science.

"An invaluable accompaniment to a standard text and an excellent educated layman's introduction to some of the more computational issues in the science of the mind."—Richard Cooper, The Times Higher Education Supplement

"Enough food for thought to satisfy the most hungry of intellects."—New Scientist

"These edited interviews of prominent workers in the cognitive science arena reveal lively disagreement on basic concepts, particularly between the two dominant camps. . . . A multiperspective overview of the evolution and objective of this relatively new discipline."—Booklist

"The editors, Peter Baumgartner and Sabine Payr, have done a brilliant job. Enough food for thought to satisfy the most hungry of intellects."—New Scientist

"The frank and friendly style of the interviews makes the book both an invaluable accompaniment to a standard text and an excellent educated layman's introduction to some of the more computational issues in the science of the mind."—Richard Cooper, The Times Higher Education Supplement

"The authors' goal was not simply to produce another text that serves to introduce cognitive science but rather to give readers a feeling of the excitement of the field by helping them understand the personal commitment of these researchers and their connections to the work and thoughts of others in the field. They were clearly successful."—Choice

"If you're interested in minds, brains, and machines, this book has something for you, regardless of your opinions and expertise.... The candor and informality make the interviews great fun to read, but the speakers are at heart dead serious.... An informative and useful introduction to current controversies in cognitive science."—Steven Pinker, Massachusetts Institute of Technology

"These interviews provide fascinating glimpses into the conceptual schemes of some of the leading thinkers in cognitive science and philosophy of mind. The presentation of so many diverse viewpoints is both informative and entertaining."—Paul Thagard, University of Waterloo

"I really like this book. The editors have done a first-class job—the canonical insiders take on Artificial Intelligence and cognitive science. As they suggest, the book is best read as a kind of hypertext, slipping between the various responses to the core questions used to organize the interviews. The result is an invaluable teaching resource and a very good read."—Andy Clark, Washington University

"Baumgartner and Payr have compiled a fascinating collection of the stories that cognitive scientists tell to motivate themselves. The difficulties they encounter get as much attention as their accomplishments in these frank and revealing dialogues. It is cognitive science with a human face."—George A. Miller, Princeton University