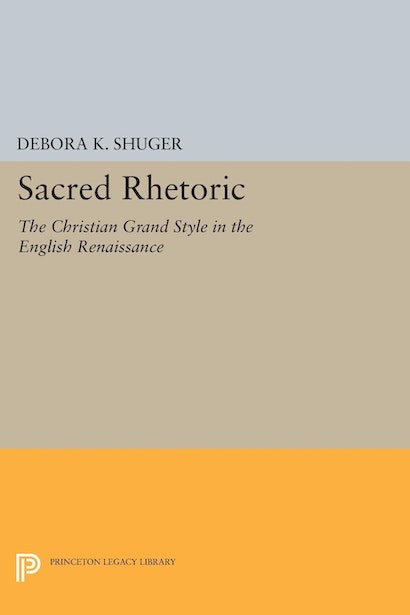 “There are no studies of a sacred grand style in the English Renaissance,” writes Debora Shuger, “because even according to its practitioners it was not supposed to exist.” Yet the grand style forms the unacknowledged center of traditional rhetorical theory. In this first history of the grand style, Professor Shuger explores the growth of a Christian aesthetic out of the Classical grand style, showing its development from Isocrates to the sacred rhetorics of the Renaissance. These rhetorics advocate a Christian grand style neither pedantically mimetic nor playfully sophistic, whose models include Tacitus and the Bible, as well as Cicero, and whose theoretical sources embrace not only Cicero and Quintilian, but Hermogenes and Longinus. This style dominates the best and most scholarly rhetorics of the period — texts written in Latin and, while ignored by most recent scholars, extensively used in England throughout the sixteenth and seventeenth centuries. These works are the first attempts since Augustine’s pioneering revision of Ciceronian rhetoric to reground ancient rhetorical theory on Christian epistemology and theology.

According to Professor Shuger, the Christian grand style is passionate, vivid, dramatic, metaphoric — yet this emotional energy and sensuousness is shaped and legitimated by Renaissance religious culture. Thus sacred rhetoric cannot be considered apart from contemporary theories of cognition, emotion, selfhood, and signification. It mediates between word and world. Moreover, these texts suggest the almost forgotten centrality of neo-Latin scholarship during these years and provide a crucial theoretical context for England’s great flowering of devotional prose and poetry.