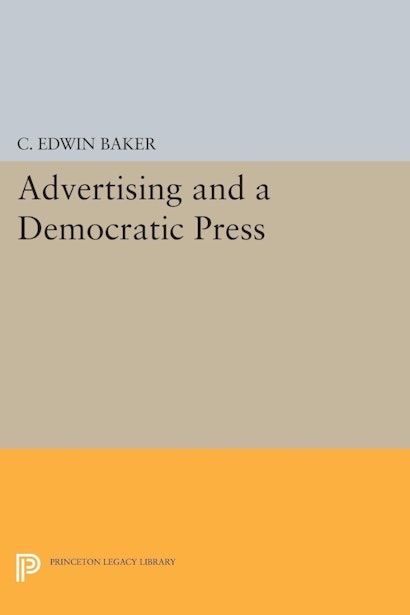 In this provocative book, C. Edwin Baker argues that print advertising seriously distorts the flow of news by creating a powerfully corrupting incentive: the more newspapers depend financially on advertising, the more they favor the interests of advertisers over those of readers. Advertising induces newspapers to compete for a maximum audience with blandly “objective” information, resulting in reduced differentiation among papers and the eventual collapse of competition among dailies.

"Advertising and a Democratic Press is an essential book for anyone interested in the structural impact of advertising on American newspapers in particular and the American media in general."—Financial Times

"Newspapers, Baker insists, operate mainly as businesses, secondarily as businesses, and occasionally—when they're sounding patriotic and devoted to the public interest—as businesses. . . . The main problem . . . is that advertising now accounts for some 65 percent of the average daily newspaper's revenue. In such a fix, he believes, advertisers replace readers and editors in determining editorial content."—Carlin Romano, The Philadelphia Inquirer

"Baker's central concern is the impact of the media's financial dependence on advertising on the substance and distribution of their nonadvertising content.... The real contribution of Baker's work is ... the use of economic analyses to show how an apparent benefit of advertising-the subsidizing of the cost of information to the public-can lead, ironically, to a less free and democratic press."—American Political Science Review

"This imaginative and original book offers a new way of thinking about free speech in America. Baker provides a rigorous empirical and theoretical discussion of the unfortunate role of commericial advertising in limiting democratic debate; he thus avoids the usual abstract homilies in favor of a careful, illuminating, and ultimately surprising analysis of the real world of the print and broadcast media. This is one of the most important books on free speech in recent years."—Cass R. Sunstein, University of Chicago Law School