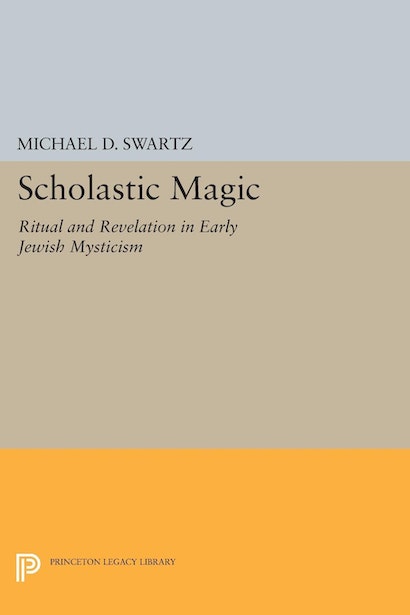 In exploring the social background of early Jewish mysticism, Scholastic Magic tells the story of how imagination and magic were made to serve memory and scholasticism. In the visionary literature that circulated between the fifth and ninth centuries, there are strange tales of ancient rabbis conjuring the angel known as Sar-Torah, the “Prince of the Torah.” This angel endowed the rabbis themselves with spectacular memory and skill in learning, and then taught them the formulas for giving others these gifts. This literature, according to Michael Swartz, gives us rare glimpses of how ancient and medieval Jews who stood outside the mainstream of rabbinic leadership viewed Torah and ritual. Through close readings of the texts, he uncovers unfamiliar dimensions of the classical Judaic idea of Torah and the rabbinic civilization that forged them.

Swartz sets the stage for his analysis with a discussion of the place of memory and orality in ancient and medieval Judaism and how early educational and physiological theories were marshaled for the cultivation of memory. He then examines the unusual magical rituals for conjuring angels and ascending to heaven as well as the authors’ attitudes to authority and tradition, showing them to have subverted essential rabbinic values even as they remained beholden to them. The result is a ground-breaking analysis of the social and conceptual background of rabbinic Judaism and ancient Mediterranean religions. Offering complete translations of the principal Sar-Torah texts, Scholastic Magic will become essential reading for those interested in religions in the ancient and medieval world, ritual studies, and popular religion.

"[Swartz's] translation. . . and commentary on the main texts of the `Prince of the Torah' tradition. . . are especially valuable and provide nonexperts with access to the important mystical-magical material under analysis. Especially significant is his emphasis on the ritual and ritual procedures outlined in these texts."—Choice

"Scholars in such fields as Classical studies, Islamic studies, and Byzantine Christian studies will find this work of great interest. . . . Indeed, they ignore it at their peril. By shedding direct light on ancient rabbinic culture, the penumbra of this study illumines as well the surrounding cultural settings in which rabbinic culture emerged."—Martin Jaffee, University of Washington