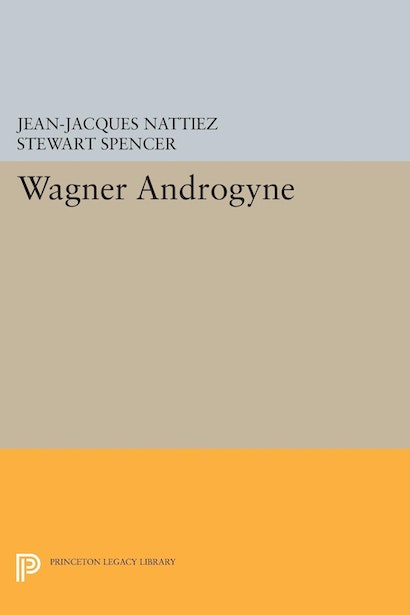 That Wagner conceived of himself creatively as both man and woman is central to an understanding of his life and art. So argues Jean-Jacques Nattiez in this richly insightful work, where he draws from semiology, music criticism, and psychoanalysis to explore such topics as Wagner’s theories of music drama, his anti-Semitism, and his psyche.

Wagner, who wrote the libretti for the operas he composed, maintained that art is the union of the feminine principle, music, and the masculine principle, poetry. In light of this androgynous model, Nattiez reinterprets the Wagnerian canon, especially the Ring of the Nibelung, which is shown to contain a metaphorical transposition of Wagner’s conception of the history of music: Siegfried appears as the poet, Brunnhilde, as music, and their union is an androgynous one in which individual identity fades and the lovers revert to a preconflictual, presexual state.

Nattiez traces the androgynous symbol in Wagner’s theoretical writings throughout his career. Looking to explain how this idea, so closely bound up with sexuality, took root in Wagner’s mind, the author considers the possibility of Freudian and Jungian interpretations. In particular he explores the composer’s relationship with his mother, a distant woman who discouraged his interest in the theater, and his stepfather, a loving man whom Wagner suspected was not only his real father but also a Jew. Along with psychoanalysis, Nattiez critically applies various structuralist and feminist theories to Wagner’s creative enterprise to demonstrate how the nature of twentieth-century hermeneutics is itself androgynous.

"An extraordinarily helpful volume that will save untold hours of reference time for the student, the general reader, and the literary scholar."—The Modern Language Journal

"A reference work of distinction which all who work in the field of literary studies will find extremely useful if not, indeed, indispensable."—Classical Journal

"I consider this volume nearly as essential for any working poet as a good dictionary."—Judson Jerome, Writer's Digest

"A work of scholarship, much humour and literary value."—The Times Literary Supplement

"No handier one-volume compendium is now available to provide so much useful, authoritative material on the history, theory, and craft of imaginative writing."—Books Abroad

"Nattiez's study—an exposition of the aesthetic of androgyny, its place in nineteenth-century thought, and its particular manifestation in Wagner's oeuvre—is breathtaking in the depth of its research and thoroughly persuasive in the connections it traces in the history of ideas. . . . A dazzling display of argumentation, . . . [offering] countless insights both profound and fascinating."—Barry Millington, Opera

"Nattiez's synthetic approach to Wagner's theory and practice . . . coupled with his profound understanding of the composer's life, make this volume a major contribution to Wagnerian studies. . . . It is a highly enriching and most comprehensive treatment of Wagner the artist and the human being."—Steven R. Cerf, Wagner Notes

"The book provides an analysis of Wagner that is both detailed and erudite. Nattiez is especially successful in describing the intellectual world in which Wagner worked. . . . Wagnerians and scholars of contemporary hermeneutics will find much to enjoy here."—Peter J. Rabinowitz, Opera Quarterly

"Jean-Jacques Nattiez's book is a breathtaking work of criticism, virtuoso in its control of historical materials and profound in its implications for interpretive scholarship."—Laurence Dreyfus, King's College London and the Royal Academy of Music