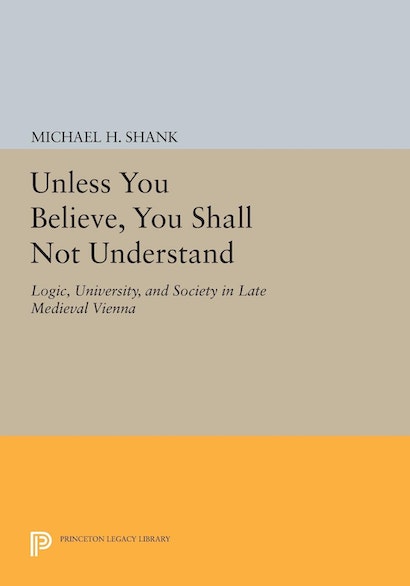 Founded in 1365, not long after the Great Plague ravaged Europe, the University of Vienna was revitalized in 1384 by prominent theologians displaced from Paris — among them Henry of Langenstein. Beginning with the 1384 revival, Michael Shank explores the history of the university and its ties with European intellectual life and the city of Vienna. In so doing he links the abstract discussions of university theologians with the burning of John Hus and Jerome of Prague at the Council of Constance (1415-16) and the destruction of the Jewish community of Lower Austria (1421).

Like most other scholars of the period, Henry of Langenstein (d. 1397) at one time believed that Aristotle’s syllogistic was universally valid even in Trinitarian theology. In touch with the vibrant Jewish community in Vienna, Langenstein had high hopes of converting its members by logical argument. When he failed in his purpose, he lost his confidence in Aristotle’s syllogistic as a universal tool of apologetics and handmaiden to Trinitarian theology. (“Unless you believe, you shall not understand,” he quoted from Isaiah, in order to express his change of opinion.) During the next generation, the intellectual climate at the university changed from academic openness to increasing rigidity, and theologians turned from argument to persecution.